Dolphin Joy in the Sea of Cortez

The Gulf of California, aka the Sea of Cortez, is a sunrise-sunset kind of place for photographers. The best photo experiences usually take place on the shoulders of the day, in the magic hours just after dawn and just before dusk. But on the fourth day aboard the Sea Bird on our National Geographic-Lindblad Expeditions trip to the Sea of Cortez, the magic hour surprised us just before lunch.

I had just ambled out to the top deck after a massage (skipping the geology talk), and was chatting with Jeffrey, the herpetologist from Florida, and his wife, when we glanced out to sea. Midway between the ship and the rugged mountains of Isla San Jose off the Baja California coast, was a long, narrow band of ripples in the water. It was as if someone had drawn a dark stripe with irregular black and white dots in the otherwise placid sea.

By then we had gotten good at peering into the water, scanning every riffle or set of sparkles, searching for signs of life. What did the splashes and wave patterns mean? We squinted to get a closer look. No need. The stripe was headed our way. Suddenly the churning white dots resolved into whitecaps and the dark dots into dorsal fins of hundreds, maybe thousands, of long-beaked common dolphins. 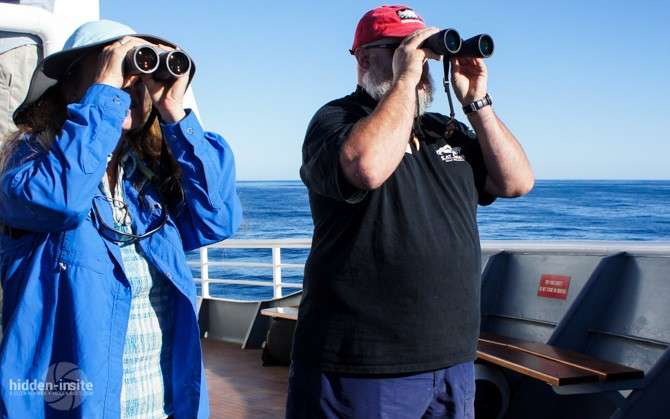 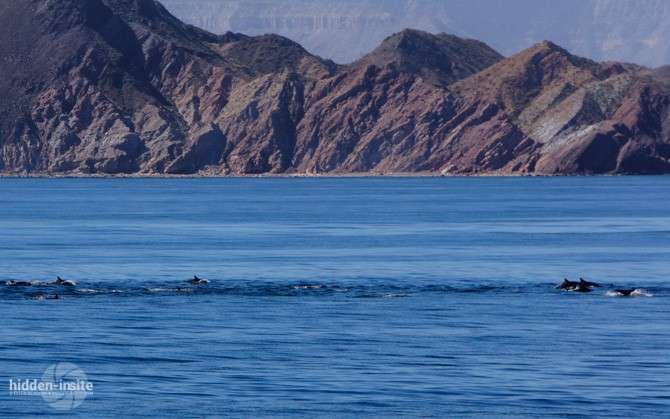 It was like watching an armada advance as the dolphins emerged. They looked like streaking torpedoes, all muscle, glistening in the light. Ready to play, not fight, they seemed to say, “Coming at ya,” as group after group, phalanx after phalanx, sidled up to the Sea Bird to ride in our wake. They approached in parallel lines, a dozen or so at a time, speeding along, racing vectors of energy, swimming, jumping, leaping. It all looked so easy, so effortless, so joyous.

The 62 passengers – and the naturalists and Nat Geo photographers – couldn’t have been happier. Lunch could wait. Click, click, click. This was a photo cruise, after all. Our glee was measured in those clicks, our currency, our joy. Just thinking about it brings a grin to my face.

So who are these creatures, beloved by so many around the world?

“There are 29 species of cetaceans in the Gulf of California,” according to Carlos Navarro, one of the naturalists on board and a specialist in cetaceans (whales and dolphins). “One third of all the cetaceans on the planet either live in or migrate to the Sea of Cortez,” he told us. If we wanted to see whales or dolphins, we were in the right place.

The most abundant cetacean in the Sea of Cortez is the black-and-white bottle-nosed dolphin of Flipper and Sea World fame. The long-beaked common dolphin is the second most plentiful. Gregarious and graceful, the dark gray and cream-colored long-beaked dolphins travel in troops of hundreds, even thousands. Hence the long “stripe” that approached the Sea Bird.

It’s hard to remember, given how agile they are in the water, but dolphins are mammals. They give birth to live young, who are born tail first so they can start to swim right away. Newborn dolphins and whales drink milk as babies. Their mothers’ mammary glands are hidden inside so they can keep their hydrodynamic profiles. Who knew they cared about their figures?

Dolphins are among the most intelligent animals in the world. I couldn’t help but wonder how dolphins and other cetaceans sleep given that they need air to breathe. Modern brain research tells us how important it is for us to sleep to clear out our extraneous thoughts and give our brains a rest. Don’t dolphins also need more than a nap to recharge their brains?

The answer, I discovered, is ingenious. Research tells us that when whales and dolphins sleep, one half of their brain shuts down for rest at a time. The other half of their brain is alert enough to bring them to the surface to breathe. Like us, they are in their sleep state – either swimming slowly or resting near the surface with their blowholes exposed – for about eight hours a day.

Luckily, the dolphins we encountered were anything but sleepy. Dashing and dancing through their watery habitat, they gave us thirty minutes of nonstop joy, a rare gift of pure delight.