Genesis is usually thought of as a time, not a place. But James Turrell’s Three Gems skyspace, in the de Young Museum’s Osher Sculpture Garden in San Francisco, is the genesis of this blog.

I happened on it quite by accident. One day after lunch at the museum’s garden cafe I started to explore. I walked past sculptures by Henry Moore, Joan Miro and Alexander Calder, past a man-made grassy hill and through a bamboo tree tunnel. I continued on through a concrete tunnel under the hill, which ended at a circular walkway. I followed the path between two tall curved walls open to the sky. It led into a circular concrete space with a high domed white ceiling. The structure, crowned with a perfectly round oculus, also open to the sky.

Once inside, I sat down on the concrete bench and allowed myself to be enveloped by the space. A lovely stillness came over me. My breathing slowed. I could hear knots of people chatting and laughing outside, their sounds muffled by the hill and the structure. Outside the leaves rustled on the trees, but I didn’t feel the breeze. I was in a magical place, my first Hidden-InSite.

Since that first visit I’ve been drawn back again and again. I bask in the calm, embraced by the roundness of the space, warmed by the residual heat of the concrete bench and captivated by how much there is to see when I slow down enough to notice. This is a place that demands quiet attention.

It’s a lovely place to meditate, to gather my thoughts. I watch the clouds drift by, playing the oculus like an instrument, changing the patterns of light and dark on the walls like notes. Sometimes the sky is deep blue set off against the curved white ceiling, at other times it’s bright white. The edge of the oculus makes the sky look absolutely flat until a bird or a plane flies by, giving it depth.

Sometimes it feels as if I am viewing a canvas, a piece of art named Sky. But this canvas keeps changing as a wisp of fog, a billowing cloud, or something as small as a butterfly or a bit of down alters the picture. Watching the circular patch of sky is like having an intimate, bounded encounter with the universe. The view through the oculus reminds me of the earth as seen from space – blue and cloudy – changing yet staying the same. The effect is a brilliant mixture of inside and outside, artifice and nature.

Directly beneath the opening, the floor is inlaid with a round piece of bluish granite. With its brown and white markings the granite slab looks like a shrunken planet. It grounds me, bringing me back to earth.

Footsteps often break the silence. I may be alone for a moment or an hour, but I’m sitting in the middle of a museum exhibit. Voices reach around the curves. Giggly kids, solemn scholars, curious tourists. Some people pop their heads inside, say “oh” and quickly move on. Others look amazed and delighted. Some sit for a while, as I do. Children turn the space into a playground. One young Galileo claimed the shrunken granite planet in the center of the floor as her prize discovery.

I keep coming back to James Turrell’s Three Gems, his only San Francisco skyspace, to encounter what he calls “slow art.” It’s art that connects you to a place and enables you to see the world differently. But you have to give it time. You have to let it unfold. You have to let his artifice work its magic so you can see nature in new ways.

I return again and again to experience change in a space that feels permanent and safe. Like Heraclitus’s stream, Three Gems is different every time I visit. The light that plays on the walls – shadows or reflections, I don’t really know which – marks the passage of time as surely as a clock or a sundial. If you knew how to read them, the patterns of light would signify the hours and seasons.

Then there’s the color. Barely concealed colored LED lights trace the boundary between the concrete wall and the stucco dome. During the day their light is barely noticeable. Beyond subtle, just a hint of changing color casts a faint glow on the dome. Rose or magenta light enhances the blue of the sky. Blue light, on the other hand, renders the sky white. It’s all part of Turrell’s clever conspiracy to use physics to play with our perceptions and color our responses. 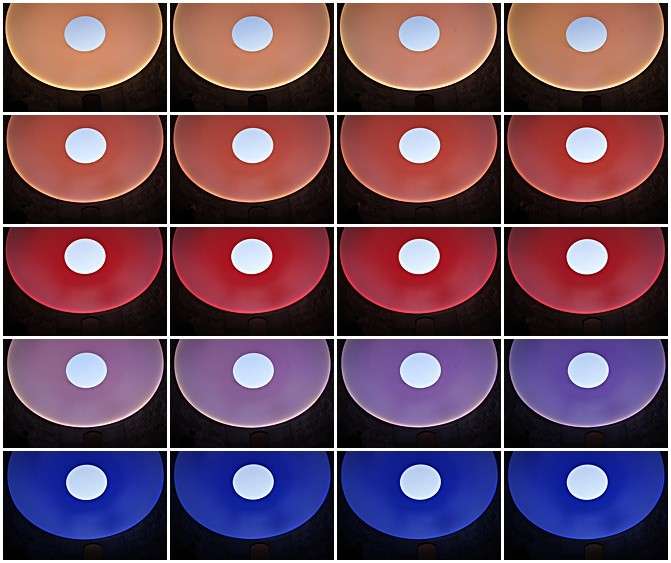 The real magic of Three Gems is most noticeable at twilight, when approaching darkness enhances Turrell’s light show. But visitors can visit the de Young at twilight only on Friday evenings from March through November or during the winter, once daylight savings time ends. It’s worth a special effort to check out the parade of colors on the dome. The colors cycle in complex patterns from a dawn-like golden pink through red, deep purple, blue-green and gray. The color of the sky changes with the changing lights. It’s a magical experience directed by a master.

I started visiting Three Gems before I learned that James Turrell is a Very Big Deal in the art world. Known as a pioneer in the Southern California light-and-space art movement, he had three concurrent retrospective exhibitions during the summer of 2013 – at the Guggenheim in New York, at the Los Angeles County Museum of Art and at the Fine Arts Museum in Houston. His defining personal masterwork is Roden Crater, the transformation of an extinct volcano near Flagstaff, Arizona, into a multi-chambered naked-eye observatory. Looking at photos of the finished domes and passageways in Roden Crater, I realize that Three Gems and Turrell’s three dozen other skyspaces are studies for the larger work. Given my feelings for the model, I can hardly wait to see the real thing.