I’m a mandarin fan. I enjoy the easy-to-peel fruit whose baggy skin reminds me of a pair of comfortable mom jeans – the perfect, self-contained lunchbox treat. I love it when my hands are sticky with juice and my mouth can’t decide whether to pucker or smile when the segment I’m eating bursts into sweet-tart droplets.

As often as I fill my fruit bowl with Satsuma mandarins, however, I’ve never given any thought to where they come from: Whole Foods? Safeway? It wasn’t until I met the delightful Joanne Neft at San Francisco’s Ferry Plaza Farmers Market, that I even considered where they grow. 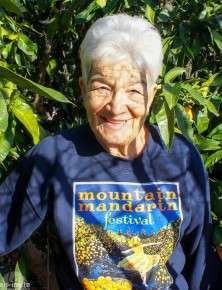 Hawking her cookbook, Placer County Real Food, Joanne invited everyone she met that Saturday morning to join her in the Sierra foothills the weekend before Thanksgiving for the Mountain Mandarin Festival, a county fair in Auburn, California, devoted to all things mandarin. I saved the charming festival postcard and Joanne’s contact info for two years before I was able to follow up.

“I’m thrilled you’re planning to come,” she replied. “We’re inviting folks to our garden to pick mandarins. Bring your own bag and wear sturdy shoes. It’s always fun, and the weather promises to be perfect.”

Indeed it was. I hadn’t been to Auburn—a Gold Rush town on Highway 49 in the heart of the Sierra foothills—in years. Joanne’s front door looked directly across her art-filled living room to a view of the orchard, hills and mountains beyond. Breathtaking.

After a quick welcome Joanne offered us orange-handled clippers that cut the mandarin stems flush with the fruit—designed to prevent bruising—and ushered us out the back door and down the steep path to the orchard. The only rule was to pick from one tree at a time. 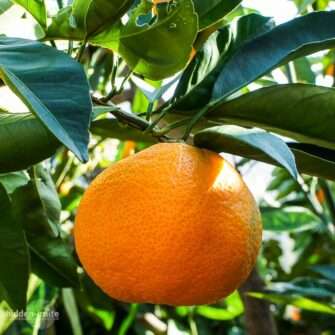 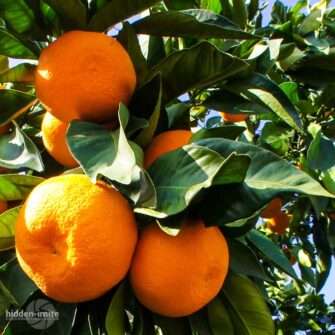 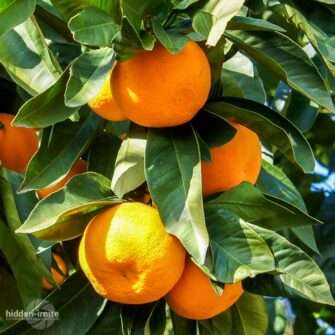 We found ourselves in a wonderland of orange orbs suspended in a sea of green against a bright blue sky. It brought me back to the Orange County and San Fernando Valley orchards of my childhood – pre-suburbia. David set to work carefully cutting fruit while I took photos. He filled our bag with mandarins from one or two branches of the chosen tree. We barely made a dent. It was a good thing Joanne, who doesn’t sell her fruit, expected a steady stream of visitors.

An energetic, entrepreneurial evangelist for healthy, tasty, real food, Joanne founded the Foothill Farmers Market in 1989. Before we left for the festival fairground, she treated us to a quick agricultural history of the region.

“Placer County was a great place to start a farmers market because it’s part of the area’s heritage,” she told us. When the transcontinental railroad was completed in 1869, Newcastle, just five miles west of Auburn, was the fruit-shipping capital of the world. “The rail cars were iced up in Roseville and then again in Truckee before going all the way to New York. It changed what people were able to eat,” explained Joanne.

As an aside, she told us that Serene Lakes, where we cross-country skied for years, used to be called Ice Lakes. 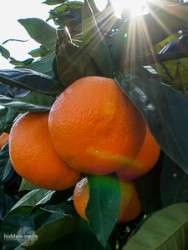 Ice was harvested there, high in the Sierra, to keep California produce fresh as it was shipped across the country.

What makes Placer County mandarins so special? According to Joanne, the foothills’ distinct characteristics, compared to California’s Central Valley, are warm days and cool nights. Fruit takes longer to grow in the foothills and consequently it develops more complex flavor.

“The others are delicious, but many are just sweet. Ours have a taste when they hit your mouth, a taste when you swallow and a hint of an aftertaste,” she said. “It’s like describing wine. Some wine awakens your taste buds, and your taste buds dance. That’s what Placer County mandarins do. It’s like having a mouthful of sunshine.”

On that bright note, we left for the festival, which Joanne started in 1994 in Newcastle with three growers, 24 venders and about 1500 guests. Today, 20-plus years later, the Auburn-based festival boasts more than 17 growers and 200 venders, plus an estimated 30,000 visitors.

Our first stop was the mandarin shake stand. The creamy mandarin milkshake really was like drinking liquid sunshine. Its bright tangy taste almost convinced me it was healthy. At the Pop-Up Grub Hub Mobile Kitchen we tried a crusted hanger steak sandwich and mandarin-infused garlic fries. The kettle corn with the special mandarin caramel glaze and the beignets also looked yummy, but we passed.

And of course there were bright orange bags of mandarins, but we already had more than we could eat in a month (really six weeks) from Joanne’s garden. Before leaving Placer County we took a short detour to Newcastle to see the old fruit sheds, and we checked out the locations of some of the orchards that sell directly to customers who stop by in season.

Mandarin juice to the rescue. Joanne explained that mandarin juice made her granddaughter’s sniffles retreat during a cold. Curious, Joanne took some of Placer County’s Owari Satsuma mandarins to the USDA Western Regional Research Center in Albany, California, for testing. Her hunch panned out. The research showed that juice from Placer County mandarins had up to six times as much synephrine, a natural antihistamine, as the same quantity of orange juice. According to the study, ten ounces of mandarin juice contain as much synephrine as one over-the-counter decongestant pill. They are also loaded with vitamins A and C, plus calcium and potassium.

Not bad for a treat that tastes and looks like golden sunshine.