Game of Thrones in the Scottish Highlands

I always looked forward to settling into the sofa, cradling a glass of scotch to warm me against the shiver I got when I heard the mordant chords of the Game of Thrones theme. Watching the fractured map of Westeros in the opening credits, I wondered, “Who is going to die tonight?”

Since our trip to Scotland in 2016 I’d been anticipating savoring that sip of scotch when Game of Thrones began its next-to-last season.

Like the best trips, it started with the map. Wester Ross in the western Highlands sounded a lot like Westeros. Is there a link? The curves and squiggles of the fictional Westeros bear an amazing resemblance to the map of the Scottish coastline. Could it have inspired George R. R. Martin, the American author of A Song of Ice and Fire, the series of novels that spawned the hit TV series? Despite no personal Scottish roots, Martin acknowledges the connection. My husband, David, and I were curious to learn more. 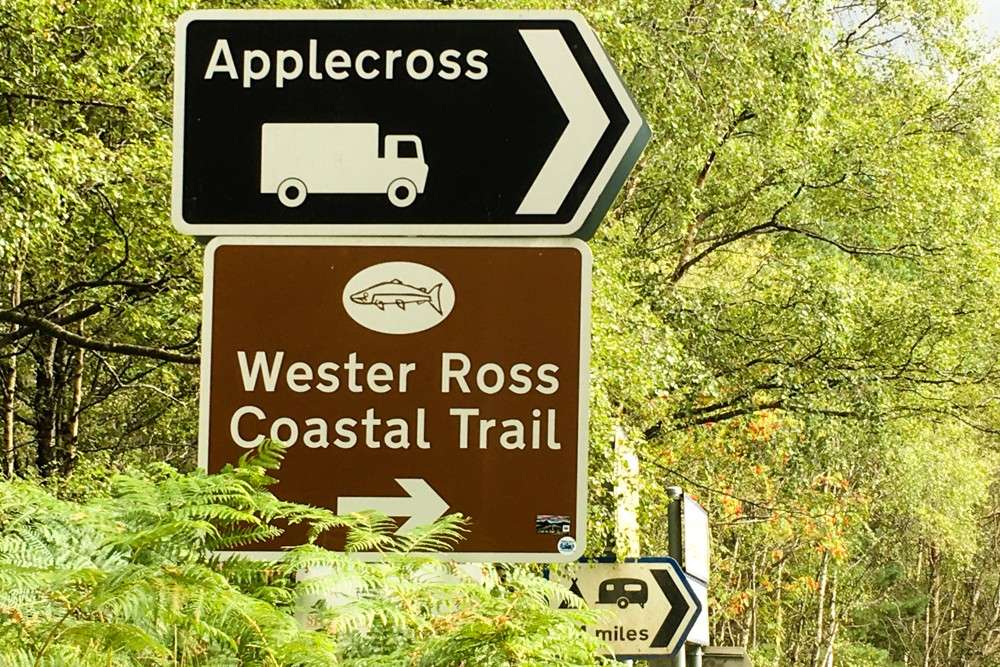 Wester Ross–Westeros? Coincidence or art imitating life?As an American I’ve always seen the history of the British Isles as a bloody game of thrones. Murder, war and treachery fill the history books and Shakespeare’s plays. David and I took a crash course in the convoluted succession of Scottish rule at the lovely National Museum of Scotland in Edinburgh.

A micro-history of Scotland

Let’s start about 2000 years ago when the Romans, enlarging their empire to all parts of the then-known world, invaded the British Isles. The Picts and Celtic tribes of the north, today’s Scotland, resisted the imperial invaders. So what did the Roman’s do? Like the Chinese centuries earlier and Donald Trump fantasizes today, they built a wall. Actually not just one wall, but two—the well-known Hadrian’s Wall and the lesser-known Antonine Wall built further north approximately along the line from Edinburgh to Glasgow, separating Britain from what was then known as Caledonia. The Roman walls, of course, were stone, not ice, like The Wall that separates the civilized world from the dreaded White Walkers and their army of the undead in Game of Thrones. 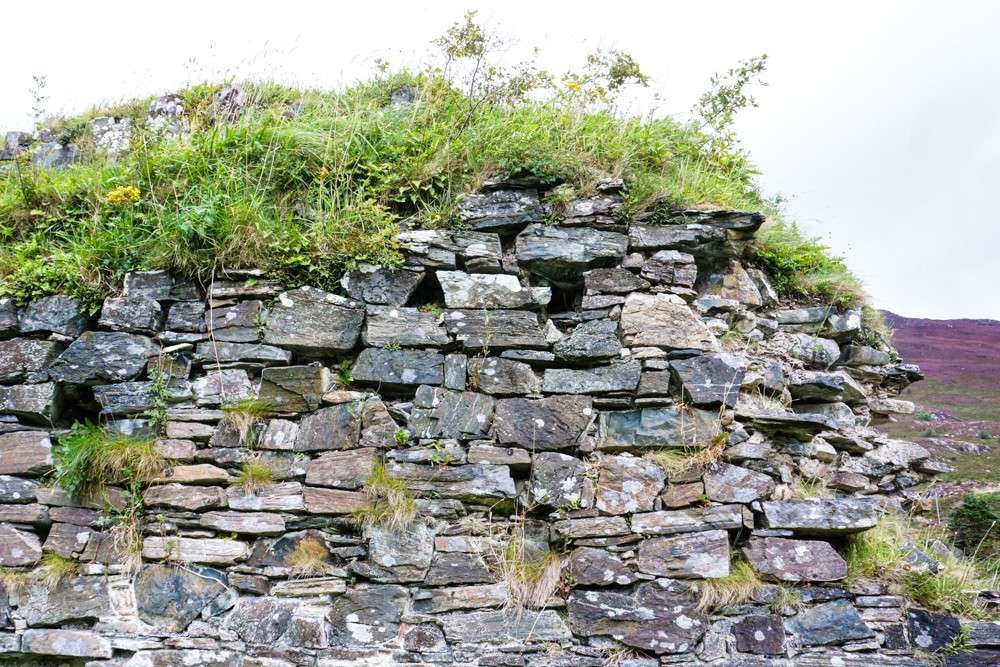 Scotland is full of stone walls designed to protect against dangers known and unknown.

The medieval Christian era in Scotland really was a game of thrones. Not only did the Scottish clans continually battle each other, but the British kept trying to annex the Scottish north. Heroes in the fight for Scottish independence included William Wallace (1271-1305), played by Mel Gibson in Braveheart, and Robert the Bruce (1274-1329). Eventually Bruce’s dynasty was succeeded by the House of Stuart (remember Mary Queen of Scots?), religious turmoil, uprisings, palace intrigues, scandals, retribution, bloody murders, and ultimately English rule.

One place where Scottish history becomes painfully clear is Culloden Moor, southeast of Inverness. In 1746 the wide, boggy plain was the site of one of the bloodiest battles in Scottish history. That’s where Bonnie Prince Charlie—no, not our contemporary who is unlikely to become King of England—but Charles Edward Stuart, lost his bid to win back the British throne for the Stuarts, bringing an end to the 40-year pro-Scottish, pro-Catholic Jacobite Rebellion.

Several Game of Thrones’ principal rivals, with their legitimate but imperfect claims to the Iron Throne of Westeros, suggest Prince Charlie. Stannis or Renly Baratheon are perhaps the most logical choices. But my personal favorite, with her good looks and blond hair evoking portraits of Charlie, is Daenerys Targaryen. If only he’d had a dragon or three, Scottish history might have been different. 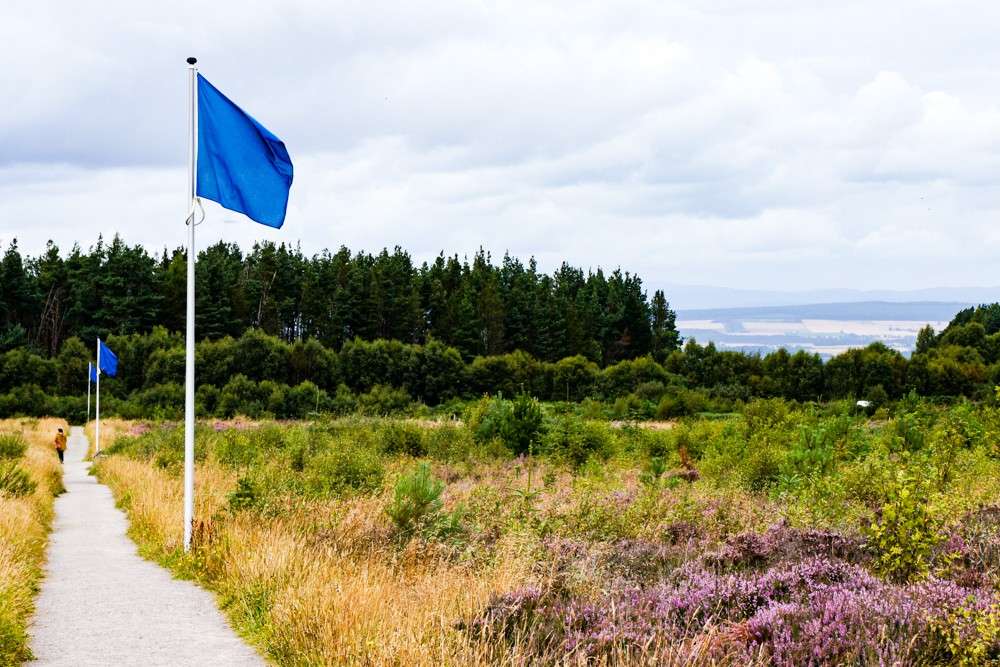 Blue flags mark the Jacobite lines at Culloden. If only the battle lines in Game of Thrones were as clear.

The Culloden battlefield is vast. Red and blue flags indicate the battle lines. Charlie’s troops were routed in an hour of punishing cannon fire. Thousands of Highlanders lay dead. Not content to win the battle and crush the Jacobites, the British marched north, killing thousands more, raping women and burning villages. The gory tale is well told in the visitor’s center with detailed explanations of who was who, artifacts retrieved from the field and an immersive, filmed reenactment that made me feel as if the cannons and bayonets were aimed directly at me. 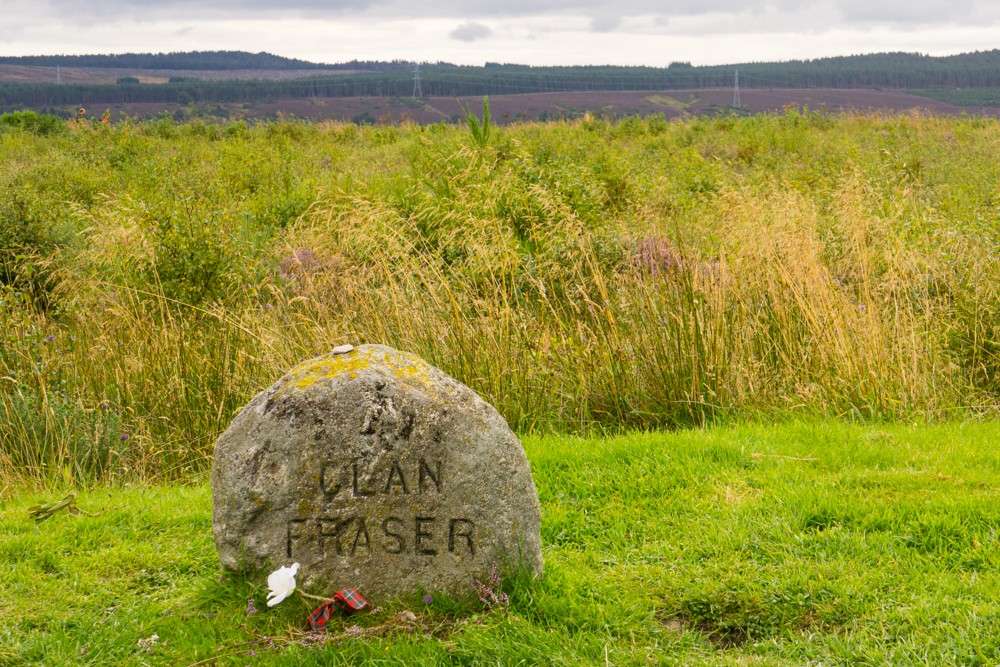 Single stones mark the graves of each of the Highland clans that fell at Culloden.

One of the odd things about old battlefields is that centuries later they feel like the peaceful countryside they were before they became hallowed ground. And yet, because the story of the battle is so well told and just the name Culloden resonates so deeply in Scottish history, one takes away an unsettled feeling. Perhaps a dram of whisky would help.

Our plan for the rest of the afternoon: head to the nearby River Spey and tour some of the 50 distilleries that are part of the Malt Whisky Trail. But alas, we had spent too much time at Culloden and we underestimated the distance to the Speyside area. We squeaked into Aberlour Distillery in time for a quick tasting before closing, then meandered along winding roads through picturesque villages on our way back to Inverness. We had to save our distillery tour for the next day. But that’s another story.

The Double Betrayal of the Red Wedding

Few scenes in Game of Thrones stand out as sharply as the Red Wedding from the third season in 2013. In a betrayal that seems to come from nowhere, Martin suddenly killed off key members of the Stark family, destroying the characters we bonded with most closely. For those of you who don’t partake, the Stark family was attending the wedding of a cousin to a daughter of longtime allies. Deep into the post-wedding festivities the mood turned and the unthinkable happened. In just a few bloody minutes the Starks and their followers lay dead around the banquet hall, killed by their hosts.

This betrayal flies in the face of ancient rules of hospitality—rules that Martin openly appropriated for his fictional universe. According to those rules, guests are guaranteed protection from the host once they have ceremonially eaten bread and salt at the host’s table. “Hospitality laws were real in Dark Ages society. A host and guest were not allowed to harm each other even if they were enemies. By violating that law, the phrase is, they ‘condemn themselves for all time,’” Martin told Entertainment Weekly in 2013.

Martin didn’t invent this horrific massacre on his own. He was inspired by two very real brutal incidents in Scottish history. In one case the hosts killed the guests; in the other, the guests turned on their hosts. Naturally we had to see where each happened. 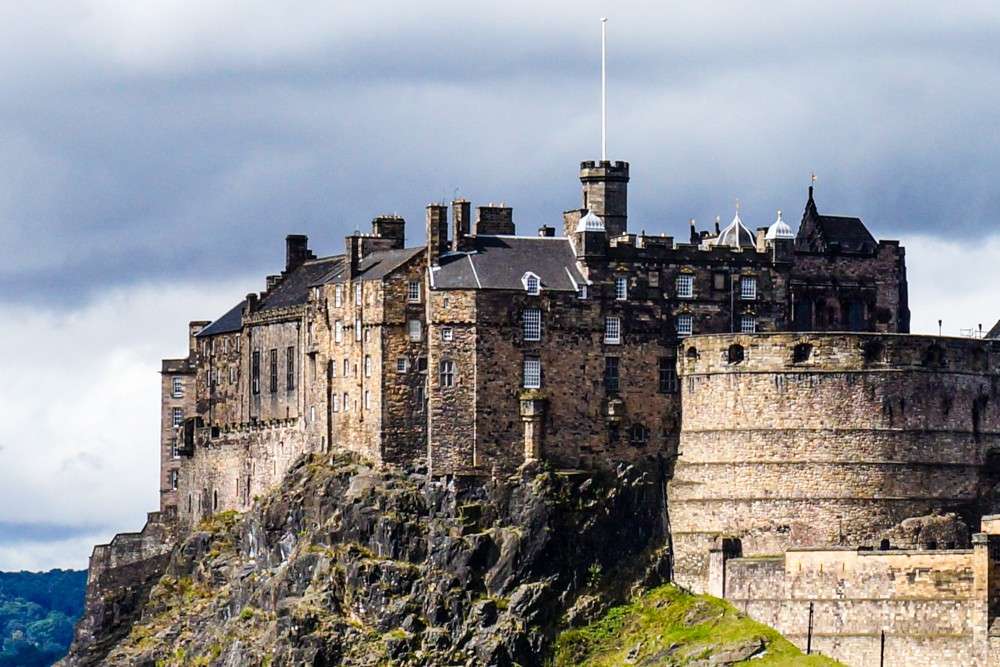 Edinburgh Castle hosted the infamous Black Dinner that inspired George Martin’s Red Wedding.Even today, Edinburgh Castle, now a UNESCO World Heritage Site and tourist destination, is the focal point of the Scottish capital. Built atop an extinct volcano, the cold imposing rooms of the impenetrable fortress have been the sites for centuries worth of intrigue. An event called the Black Dinner took place in 1440, when 16-year-old William, the 6th Earl of Douglas, and his younger brother were invited to dine with the 10-year-old James II of Scotland. Legend has it that the Black Douglas clan was becoming a powerful threat to the king. This royal play date, complete with an offer of safe passage, was orchestrated by the adults in charge, who then proceeded to kill the Douglas brothers after a mock trial for treason.

The other event Martin cites as his model for the Red Wedding is the February 1692 Glencoe Massacre. One hundred thirty members of the Campbell clan, allies of the British, camped out with the MacDonalds for 10 days, and then, on orders from the British, violated all the laws of hospitality and slaughtered 38 MacDonald men. Another 40 women and children died from exposure after their homes were burned. The incident has been so seared into local lore that a sign on the door of the nearby pub, the Clachaig Inn, still says, “No Hawkers or Campbells.” 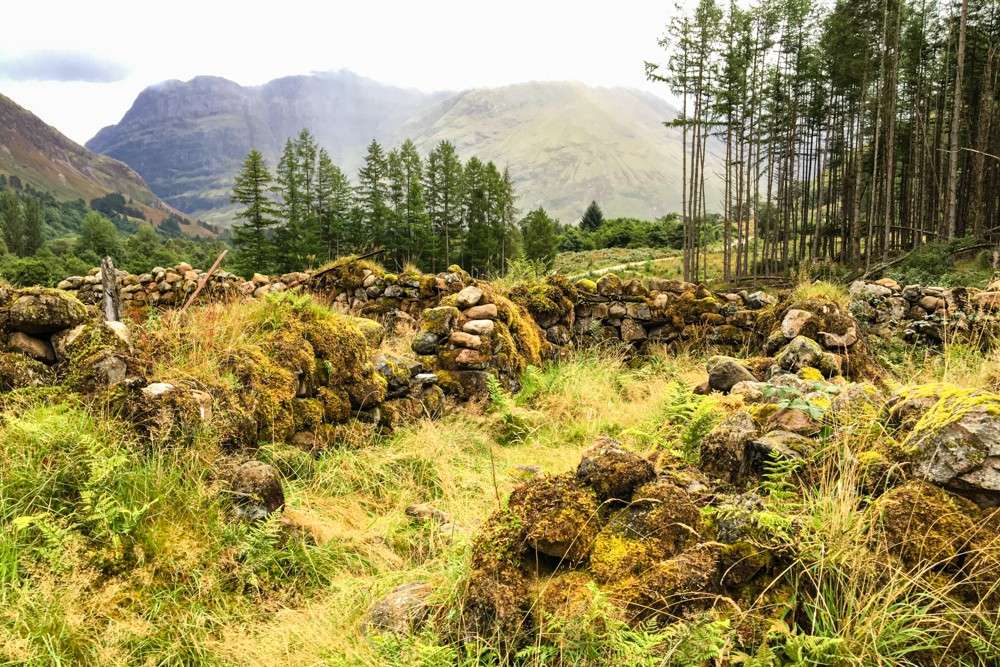 This pile of stones is all that remains of the site of the Glencoe Massacre, another inspiration for the Red Wedding.

We drove to Glencoe from the Isle of Skye on a dark and drippy day. It was late August, and winter was coming. The setting, with a dramatic Scottish sky and tall, craggy mountains—the area is famous as a hiking and mountaineering center—amplified our anticipation. What did we expect to see? The visitor’s center described the incident, and we followed a woodland trail to the remains of the house where the massacre is said to have occurred. It was hard to imagine living there during a 17th century winter. Snow stacked up at the base of the mountains. Taking hospitality and warmth from people you are about to kill. Leaving the women and children to the wrath of the elements. Sometimes fictional history pales besides the real thing. 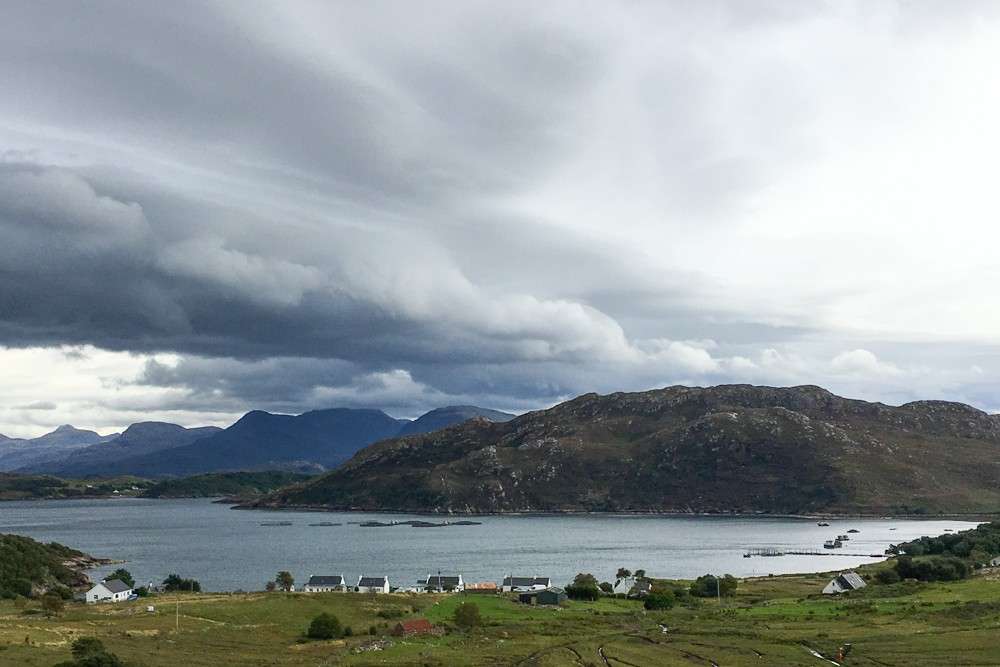 Winter is coming! We just have to watch Game of Thrones to see what it will bring.

As George Martin said in his interview, “No matter how much I make up, there’s stuff in history that’s just as bad, or worse.” With that cheerful thought in mind, I take a sip and feel a honeyed burn that reminds me of the Scottish glens, mountains and curvaceous coastal coves where the real game of thrones played out.