The morning before the eclipse, my husband David said that a total solar eclipse was likely to be the Taj Mahal of ephemera. I wouldn’t know. I hadn’t seen either one yet.

I’ve wanted to see a total solar eclipse since I was ten years old. That’s when I got the Golden Book of Astronomy, a large format, richly illustrated book that penetrated my imagination. I assumed you either had to be very lucky geographically, a scientist, or extremely rich to see a solar eclipse. At 10, I was none of those things.

The idea of seeing one stayed in the back of my mind in a bucket list sort of way, popping up each time I read about an eclipse taking place in an exotic or out of the way place. I had pretty much given up on seeing one myself until I read about the eclipse scheduled to span the full width of the United States on August 21, 2017. The most accessible point of totality to our San Francisco home is Madras, Oregon. It was March when I became aware of the eclipse, and David snagged a ski condo in Bend, normally an hour south of Madras.

Twenty-four hours – a day to go

Today is the day before the day of. I’m excited like a little kid waiting all day for the day before my birthday to finally get out of the way. Exactly 24 hours before totality, we finished up at Bend’s Original Pancake House, crowded with eager families. At least 250,000 people from outside the narrow band of totality have descended on Central Oregon. We were part of a legion of casual eclipse chasers, people who have driven for days or flown thousands of miles to catch two minutes of something spectacular. Most of us are newbies, eclipse virgins.

I’ve been reading interviews of real eclipse chasers, most of them scientists, who claim that one totality experience is not enough. Although predictable in time, both in terms of when they occur and how long they last, each eclipse, according to the experts, is an experience in itself.

Tomorrow, tomorrow, I tell myself. It will probably be my one and only. 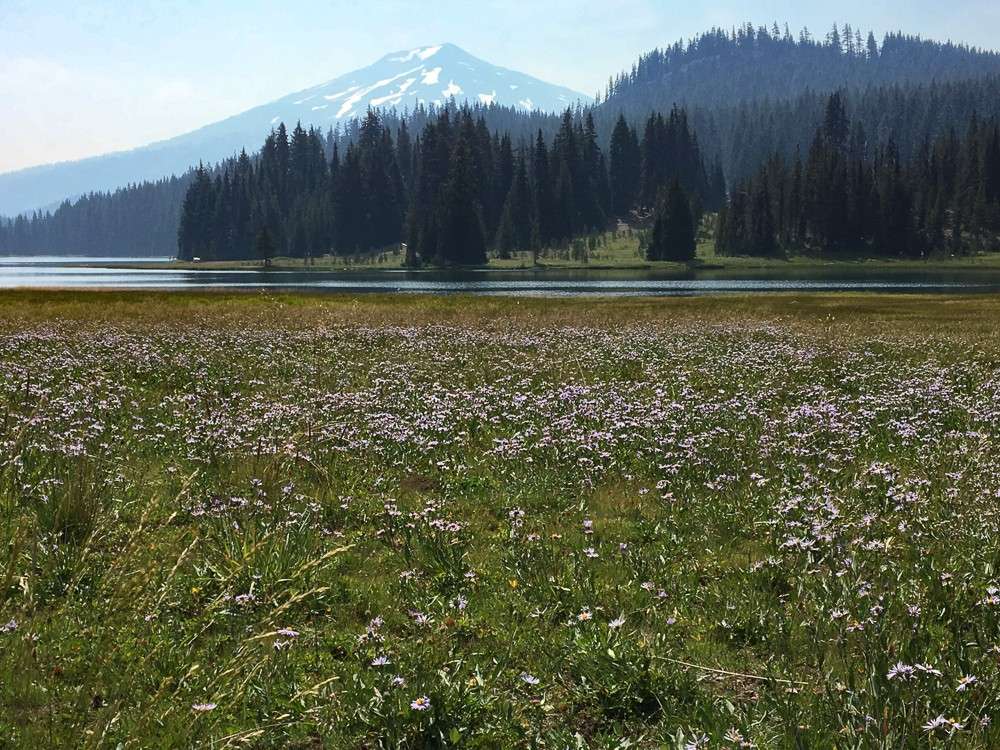 In the meantime, we head up the flank of Mt. Bachelor to Todd Lake for a different kind of natural experience. I savor the light breeze rippling through the fir trees and slow down. In a meadow by the lake, I chase a butterfly with my camera and think about nature fast and slow. The totality of an eclipse is over in minutes. A butterfly flits away in seconds. Lakes become meadows slowly, imperceptibly, but occasionally in the span of a human lifetime. I’ve seen Mirror Lake in Yosemite fill in to become Mirror Meadow. Is that nature fast or slow? In geologic time, it’s a nanosecond.

Fourteen hours and counting down

The day winds down. Downtown Bend is quiet. Everyone is going to bed early. The roads are predicted to be a slog. We’ve arranged to meet a bus, sponsored by Arizona’s Lowell Observatory, at 2 am to get to Madras High School in time for the Lowell Observatory Solar Eclipse Experience. I feel like we’re catching an early morning flight half way around the world. We’ve plotted our route to the meeting point and planned alternatives in case the roads are already a mess at 1:45 a.m. I’m going to have to catch up on my sleep in the bus. Tonight is going to be about a nanosecond long. 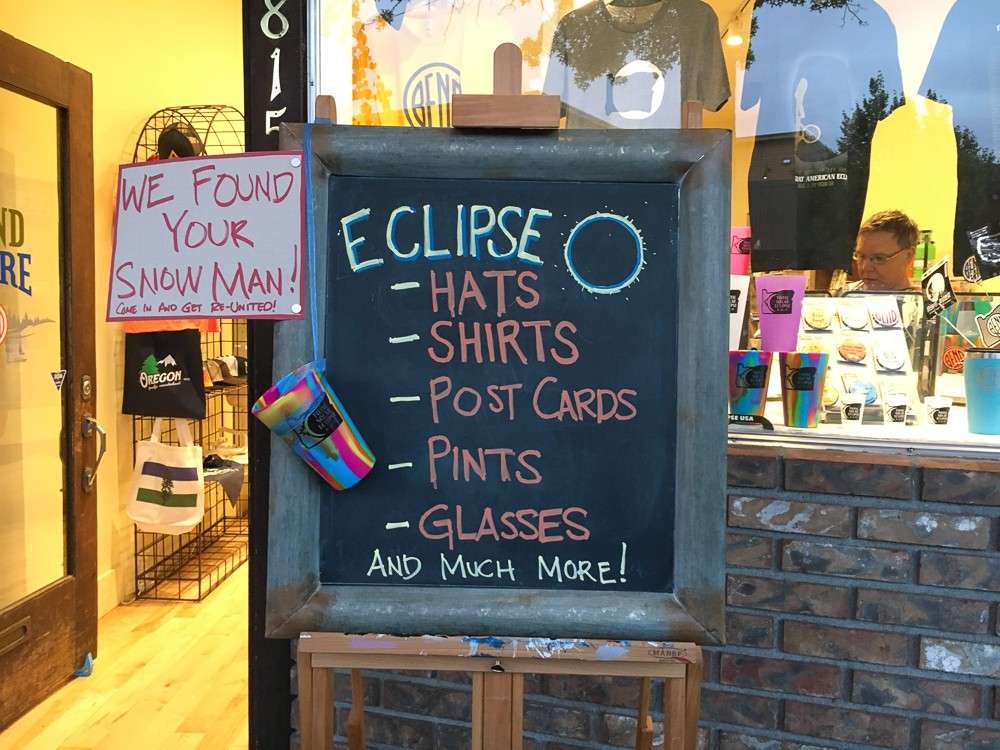 We pull up to the meeting point in Bend. The roads were empty as you would expect on a normal day at 1:45 a.m. We put on our name tags and wrist bands, pick up bag breakfasts (bagels and scones … not on the proto-paleo diet), and fleece blankets to help us sleep on the bus. Highway 97 is our yellow brick road, but where are the rest of the Munchkins? The highway is empty. We drive swiftly past the strip mall towns and arrive at Madras in an hour. The only unusual thing we see are parking lots nearly full of cars and RVs at 3 a.m. I’ve heard that parking spaces in Madras went for hundreds of dollars each. More than our condo in Bend. 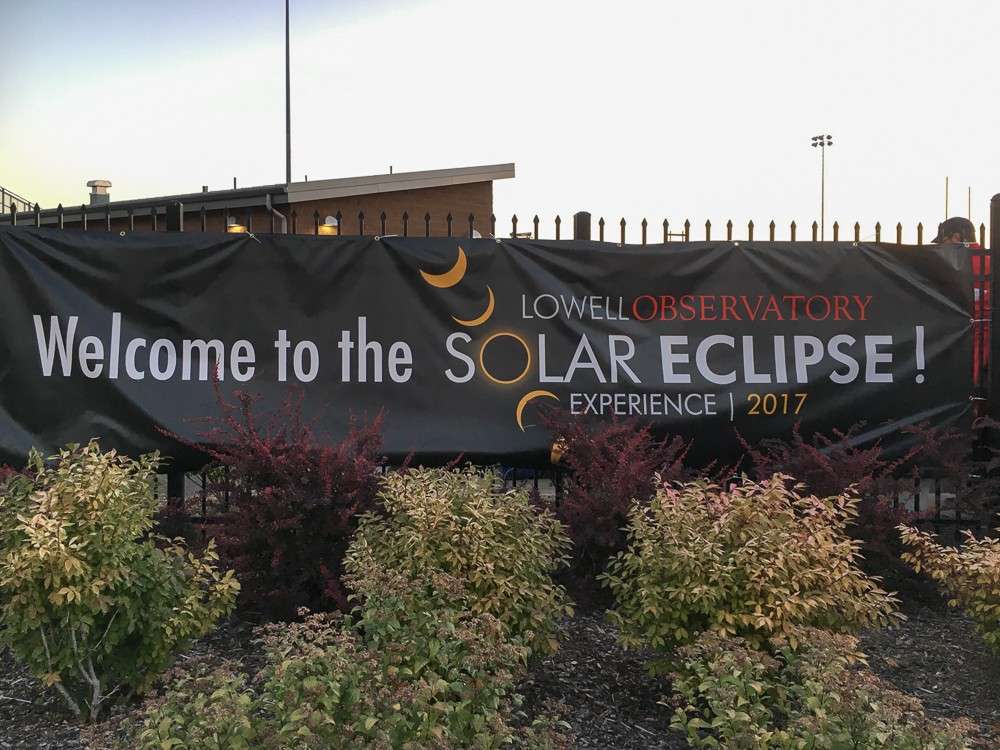 It’s 6 a.m. and the sun rises, on schedule, over the high desert town. Venus shines down on us. A good omen. Busloads of people and many more who came on their own line up to enter the field at Madras High School. We are ready to see what happens when the moon gets in the way of the sun’s rays. There are about 2,000 of us milling around in the chill morning waiting for that birthday moment to transit across America. 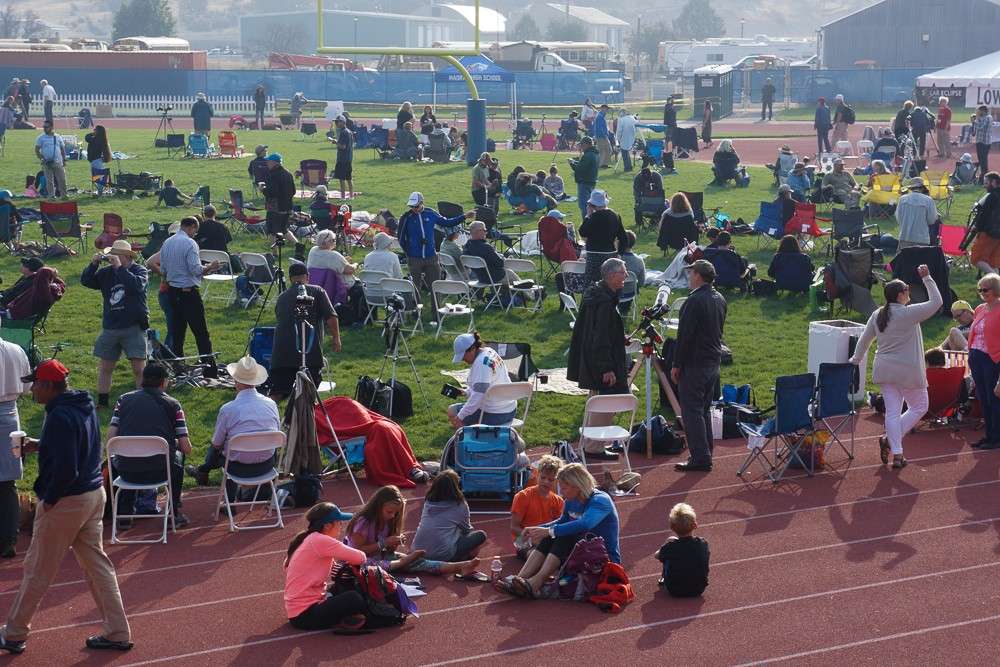 And the scoreboard on the football field was lit up, counting down to totality. 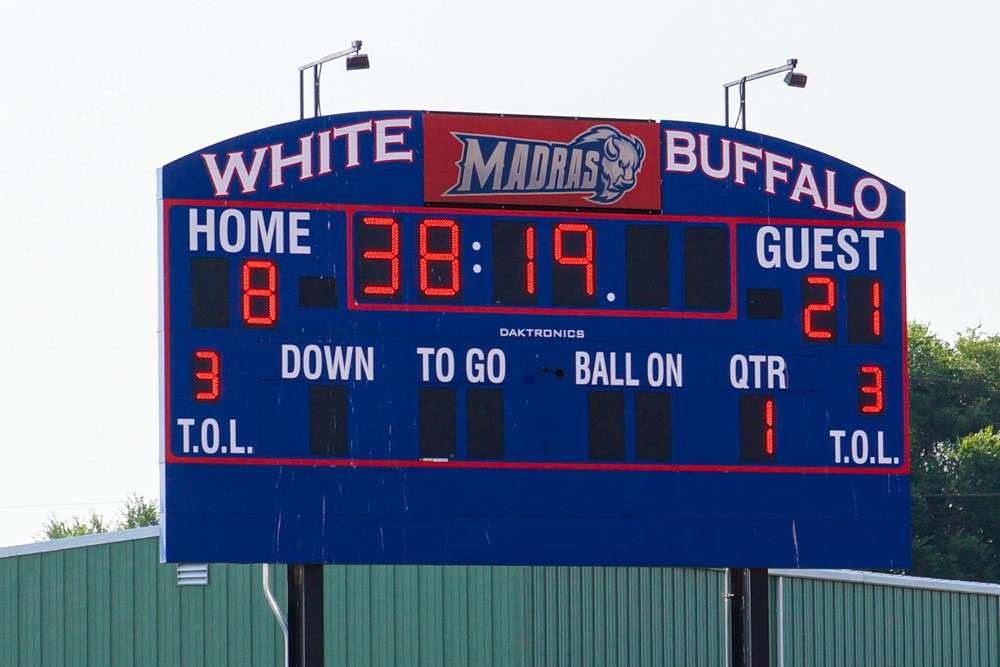 Game on! You can read about our Totality experience here.