A total eclipse is 73 minutes of anticipation leading to totality, the time when the moon completely obscures the sun. In Madras, Oregon, on August 21, 2017, totality lasted just two minutes and two seconds. They were two sublime minutes, but if you blinked, you missed them. I didn’t blink.

David and I joined more than 2,000 others on the football field at Madras High School right in the middle of the 70-mile wide path of totality that spanned the U.S. from Oregon to South Carolina. We were at the Lowell Observatory Solar Eclipse Experience, an astronomy-day eclipse festival with lectures, lunch and viewing glasses included. 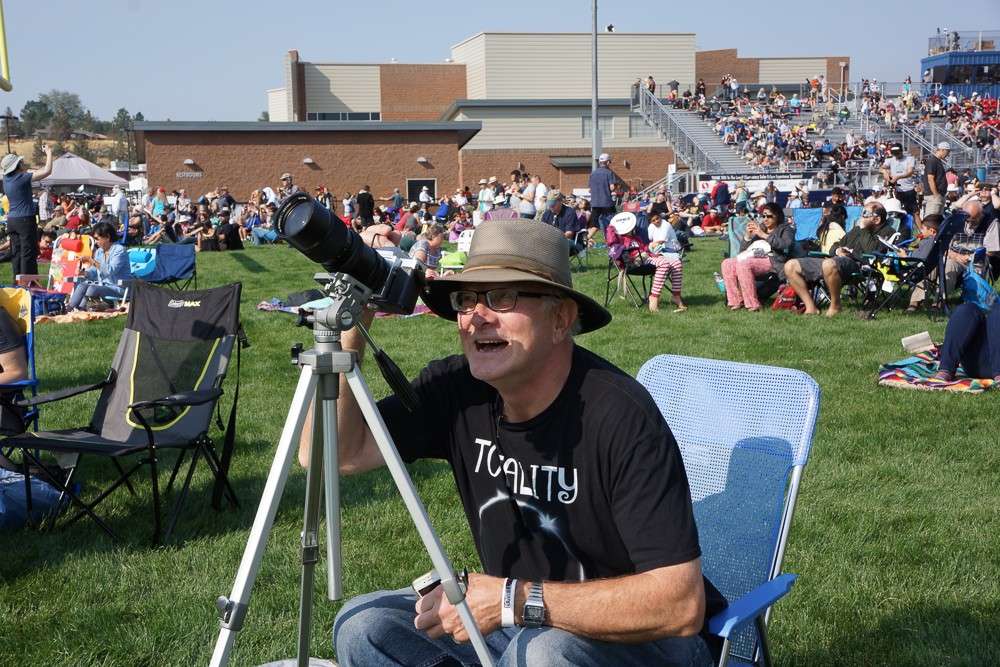 I wandered the crowd, enjoying the party atmosphere, meeting people from all over the U.S. David set up his camera and schmoozed with experienced eclipse photographers about ideal exposures to catch the ephemeral stages of totality, like Baily’s Beads and the diamond ring effect. Each lasts mere seconds. At 9:06 a.m., a cheer went up from the crowd. The moon started nibbling the sun from the upper right. It was all going as science had predicted. 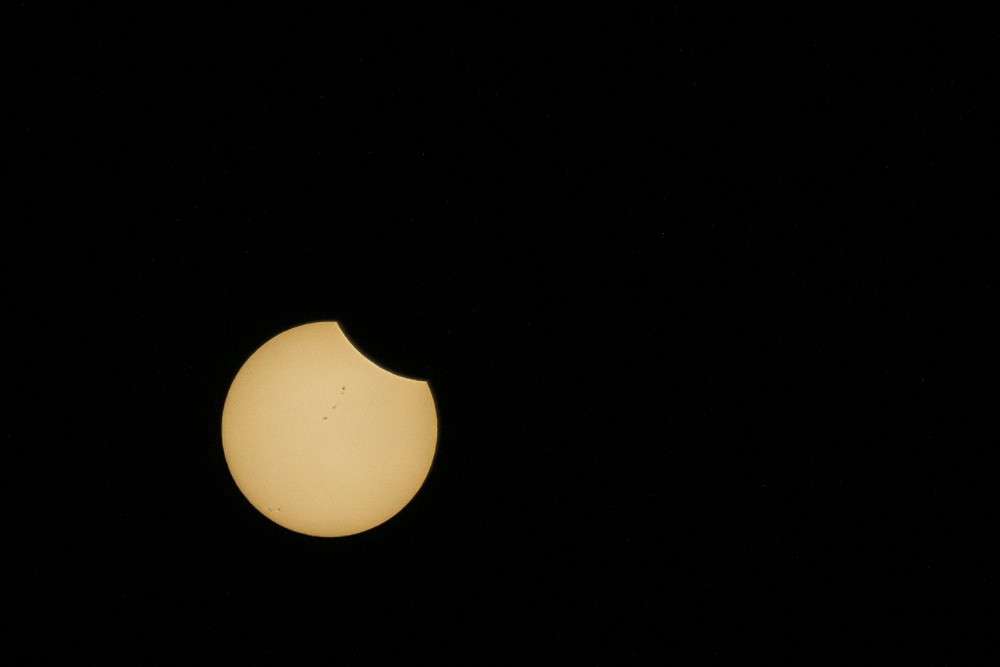 The scoreboard on the football field, set up with the date, 8/21, displaying on the “home” and “guest” sides of the board, counted down the minutes to totality. 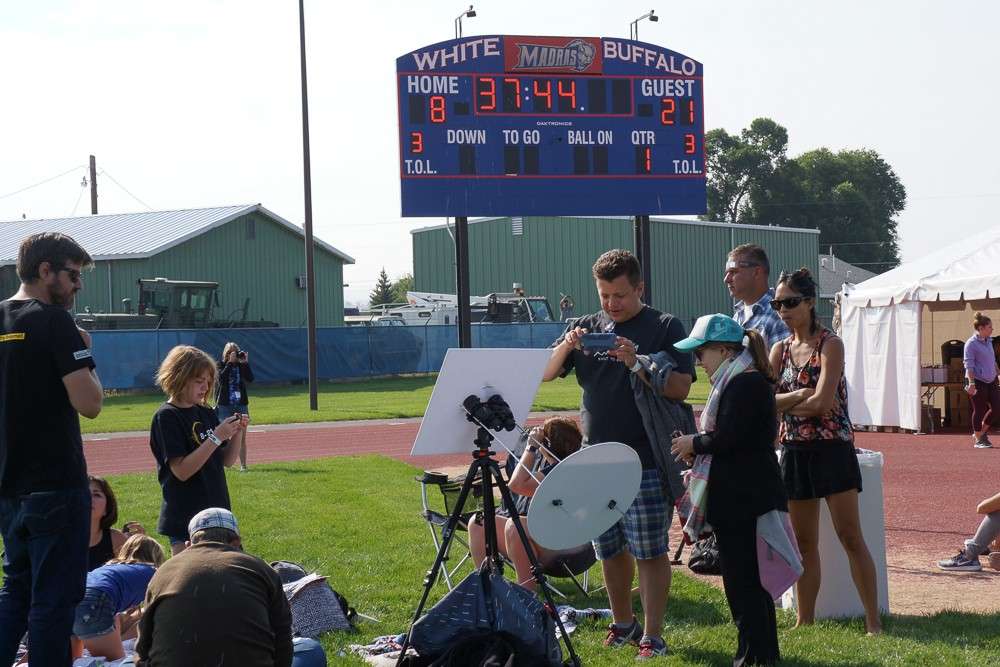 The dimming of the day

The air had chilled gradually in the last 15 minutes, but not enough to put on my jacket. When totality arrived just after the last crescent of the sun was visible, Jeff Hall, director of the observatory, announced that it was safe to remove our protective glasses and just watch. Shadows intensified. Colors dimmed. David was a color I had never seen before, kind of a grayish tan. The crowd hushed. I felt like I was inside a slow-motion, polarized movie, almost black and white, but not quite. 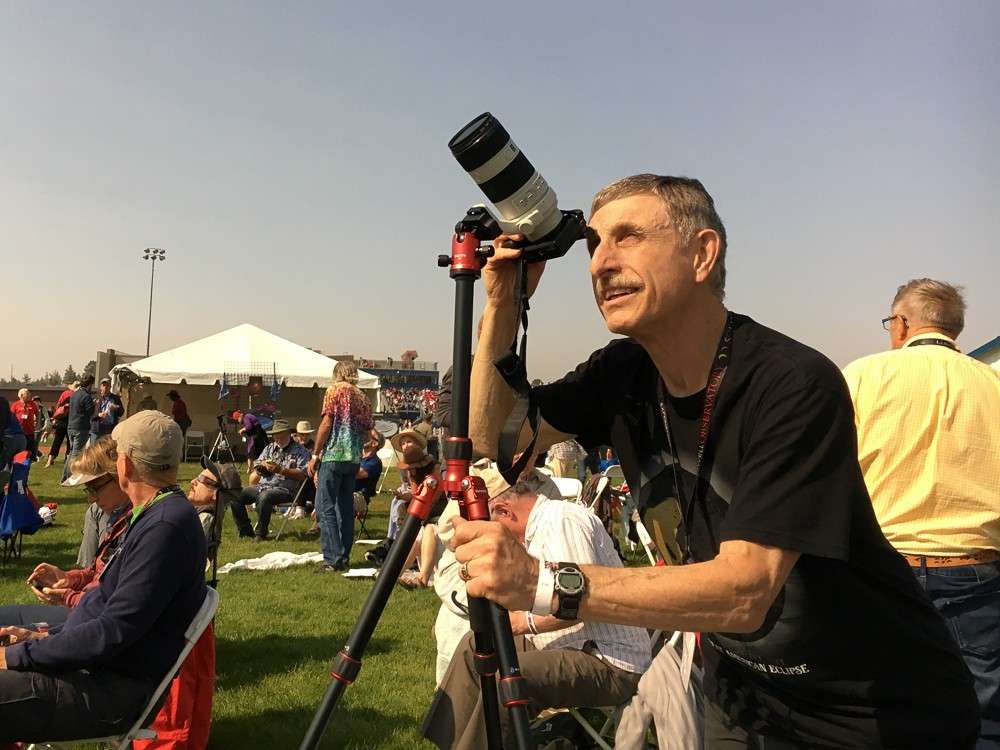 The sky never looked like a normal night sky, dark with stars. Venus was the only other celestial object visible in the sky during those two minutes. Clouds in the northern sky glowed red like sunset, but it was 10:19:34 a.m., not early evening. And, it was the wrong direction for a sunset. As far as we knew, the only birds around, two osprey nesting in a climbing apparatus near the field, didn’t react. But we did, with applause, oohs and aahs, and OMGs. There were a lot of OMGs, and we were hanging out with a bunch of astronomers.

It’s kind of a cliché to say it, but the sun was the real star of the show. Sorry about that, but there’s no other way to describe it. It was all about the sun. I watched with my regular sunglasses, which add a lovely golden tint to mundane life. This was anything but mundane. Outside the black disc of the moon, the inner corona glowed in a ring of golden light. I saw little flares along the right side of the sun, say from noon to 3 p.m. if the sun were a clock. But the gossamer outer corona, usually obscured by the enormous brilliance of the sun, was the real surprise. I could have watched the delicate tendrils of energy dancing out toward space all day, but I only had two minutes. It was the very definition of ephemeral.

As I was enjoying the patterns, I saw two additional phenomena that I had heard about, but never really expected to see: Baily’s Beads and the diamond ring effect. Baily’s Beads are little balls of light that show up around the edge of the moon because the landscape of the moon is uneven. The mountains and craters of the moon allow bits of sunlight to shine through, creating the illusion of a string of beads around the outline of the moon. The diamond ring effect is essentially the glow of the last bead as totality ends. It showed up as a spectacular flare of light that drew an appreciative murmur from the crowd.

What we were all waiting for: images of totality 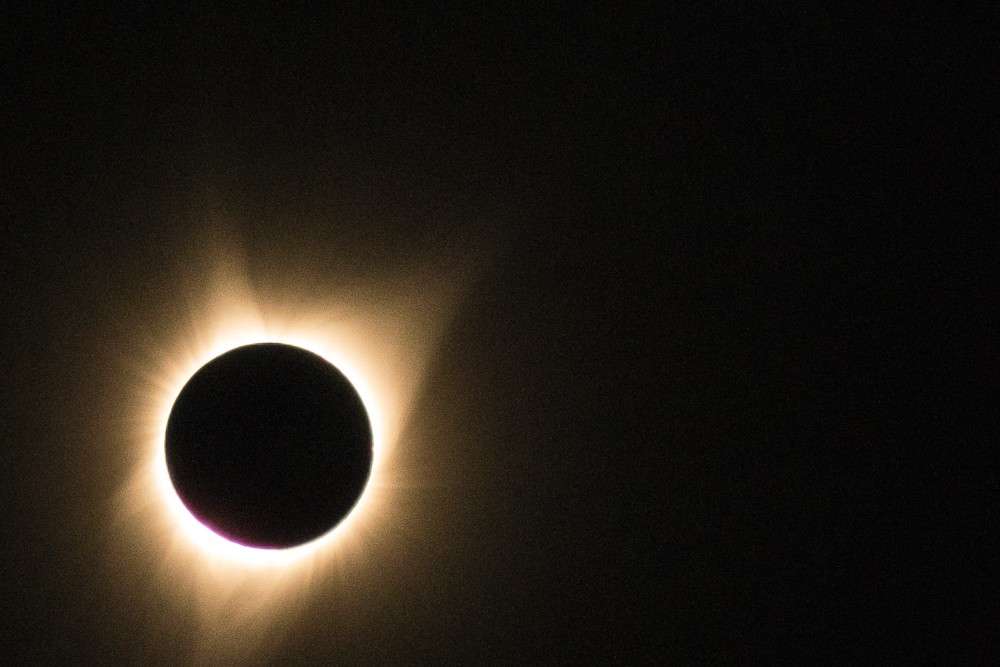 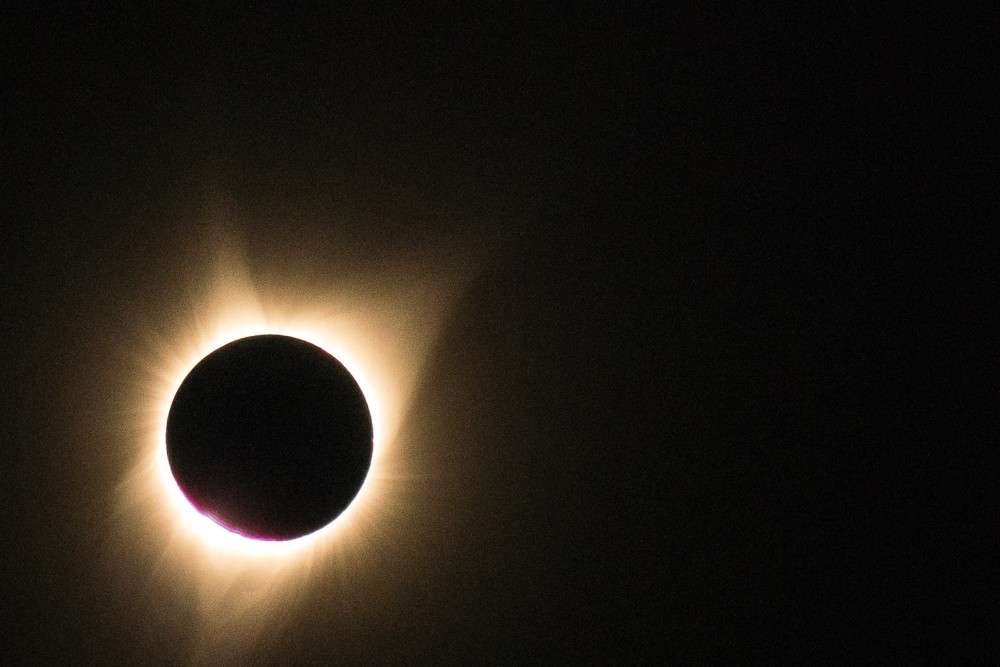 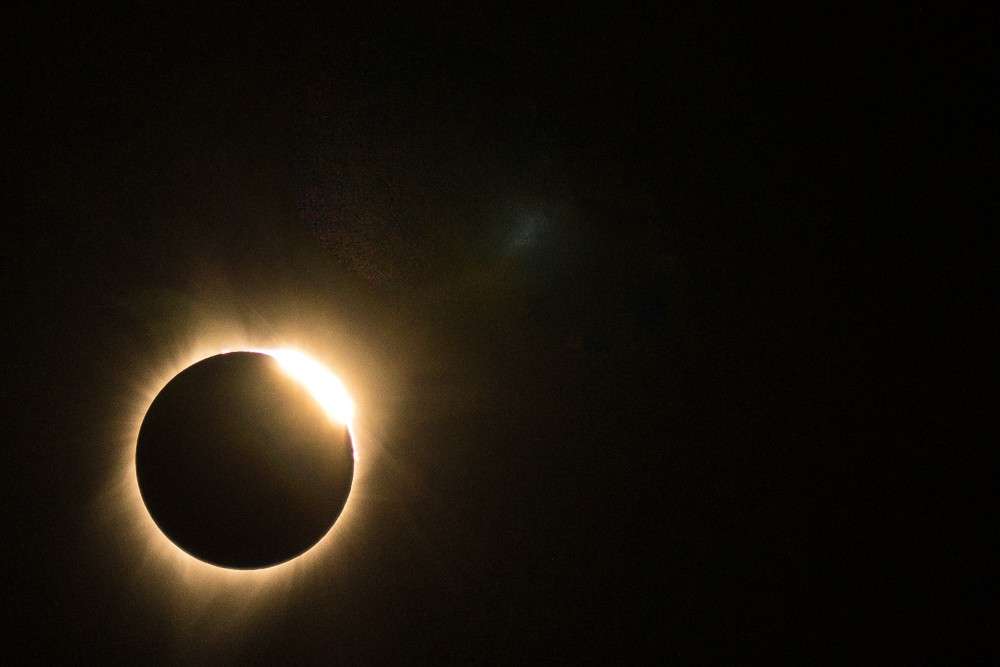 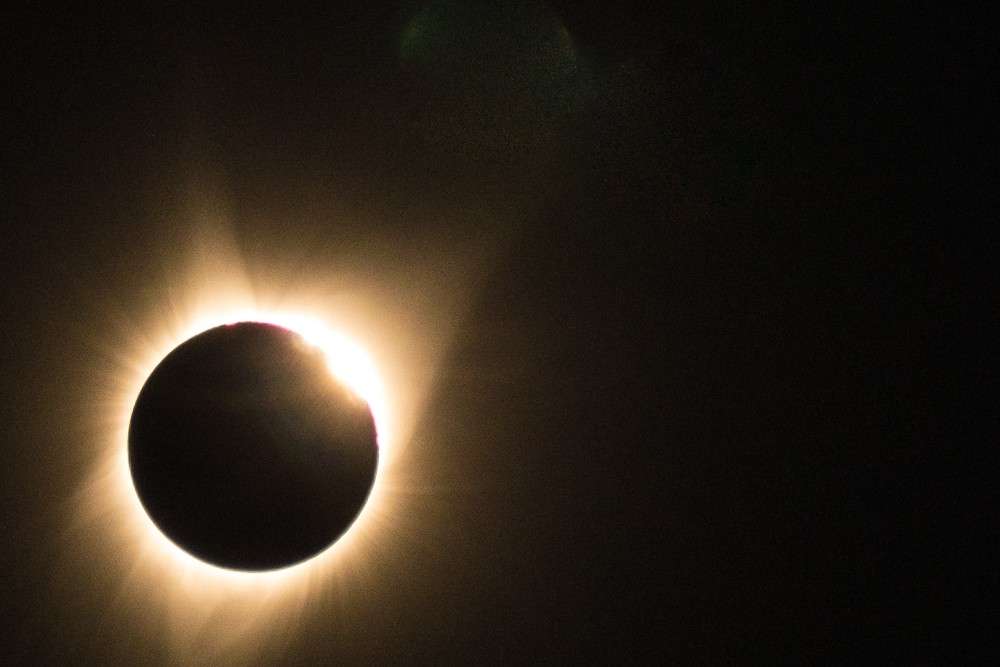 As totality faded, the field broke into applause and a fellow just in front of us pulled out his recorder to play “Here Comes the Sun.” And just like that, it was over. Two of the best minutes of my life.

Thanks to David, my partner in adventures large and small, for taking such great pictures of the eclipse.

Our viewing experience was totally (really!) enhanced by the astronomers and staff of the Lowell Observatory. The talks were fun and informative, the people friendly and accessible. I’m ready to sign up if they put on another eclipse party in 2024.

You can enjoy the atmosphere and science of the Lowell Observatory Solar Eclipse Experience in the Science Channel’s live stream from the event. You can also check out Dr. Jeffrey Hall’s pre-eclipse talk on “What to Expect When You’re Expecting an Eclipse.”

And you might enjoy a local’s take on the whole eclipse experience in Central Oregon with a look at the Facebook page, The People of the Central Oregon Eclipse. Thanks Kim for sharing your link with the world.

Finally, you can read about our countdown to the eclipse here.