The Halvah Hunt Resumes in the U.S.

Searching for the best of anything is a fool’s errand, perfectionism run amok. But quests, like scavenger hunts, can take you to unexpected places. A Russian deli near Boston? Cobble Hill in Brooklyn? An upscale Israeli restaurant in Manhattan? Let’s check it out.

My quest to find superb halvah, a Middle Eastern confection I loved as a child, started on a recent trip to Israel. But once on the hunt, I couldn’t stop looking for the earthy sesame-flavored candy when we got home. I didn’t find much of interest in San Francisco or Oakland, but uncovered some real treasures in Boston and New York.

A Google search of halvah in the Boston area led to Bazaar on Cambridge Street, a Russian and Eastern European deli in Allston near Boston University that features “royal delicacies at peasant prices.” They had a small selection of halvah tubs in various flavors, but what really caught my eye was sunflower halvah. It never occurred to me that you could make halvah from anything but sesame seeds, but why not? It turns out that sunflower seed halvah is considered a treat in Eastern Europe. It’s naturally darker than sesame-based  halvah, and it has an earthier taste. It reminded me of the difference between pumpernickel or dark rye bread and caraway-studded light rye. It was interesting, but not my favorite.

New Yorkers get obsessions, even silly ones. And I was obsessed. I wanted to taste all the halvah New York City offered. Like theater and fashion, it offered a lot. The search turned out to be great for my taste buds, but not for my diet. Come along. 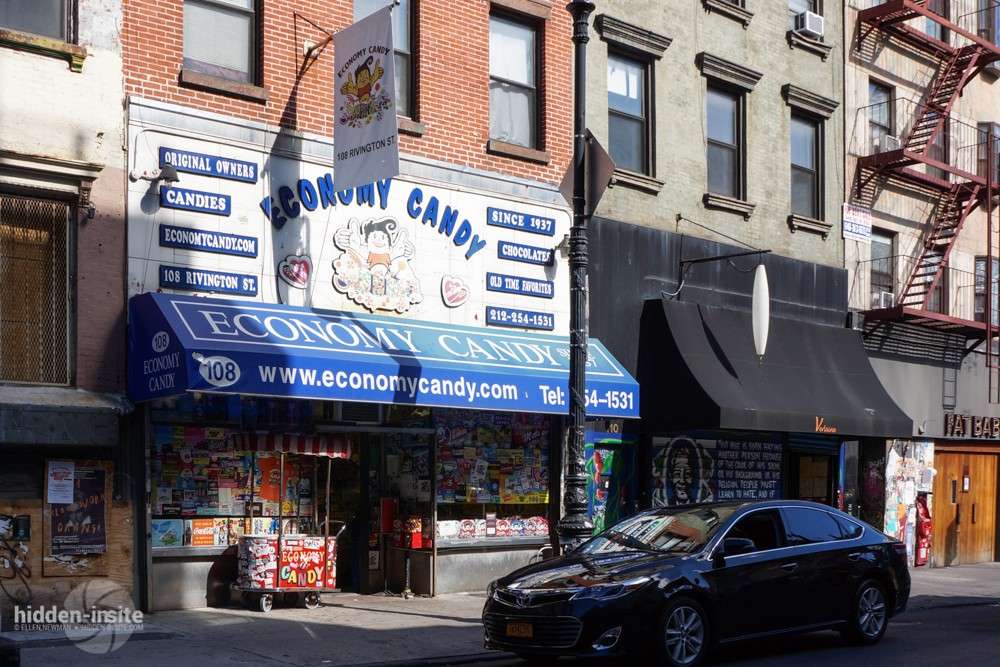 We started at Economy Candy, an emporium full of everything we loved as kids … all-day suckers, Turkish taffy, Abba Zabba bars, chocolate of all kinds, and, of course, packaged halvah.

We had a look, but didn’t buy any because I was looking for the big round blocks I remembered from Canter’s in Los Angeles. So after a quick look at Economy Candy, we moved on. 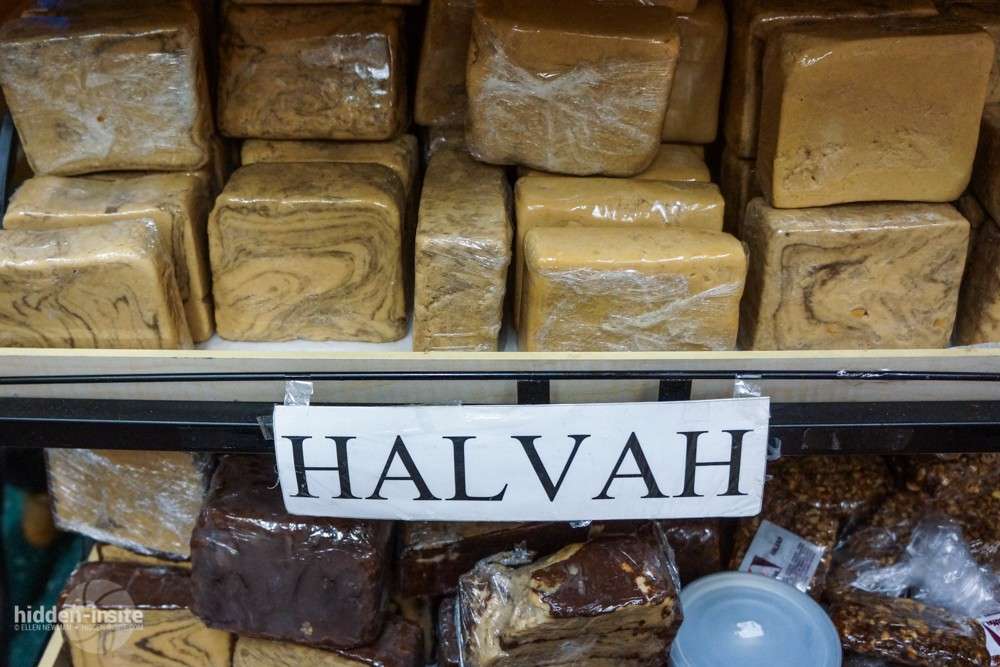 We heard that Russ & Daughters Café, an offshoot of the famed appetizing store in the Lower East Side, served halvah ice cream. Check. Add it to the list. And Taboon, an upscale Israeli-Mediterranean restaurant on 10th Avenue in Hell’s Kitchen serves a dessert called silan, topped with shredded halvah. That one dessert was tempting enough to make a dinner reservation.

We hit Russ & Daughters Café on Orchard Street for breakfast before a tour of the Lower East Side sponsored by the always-interesting Tenement Museum. Dessert at breakfast? Why not? 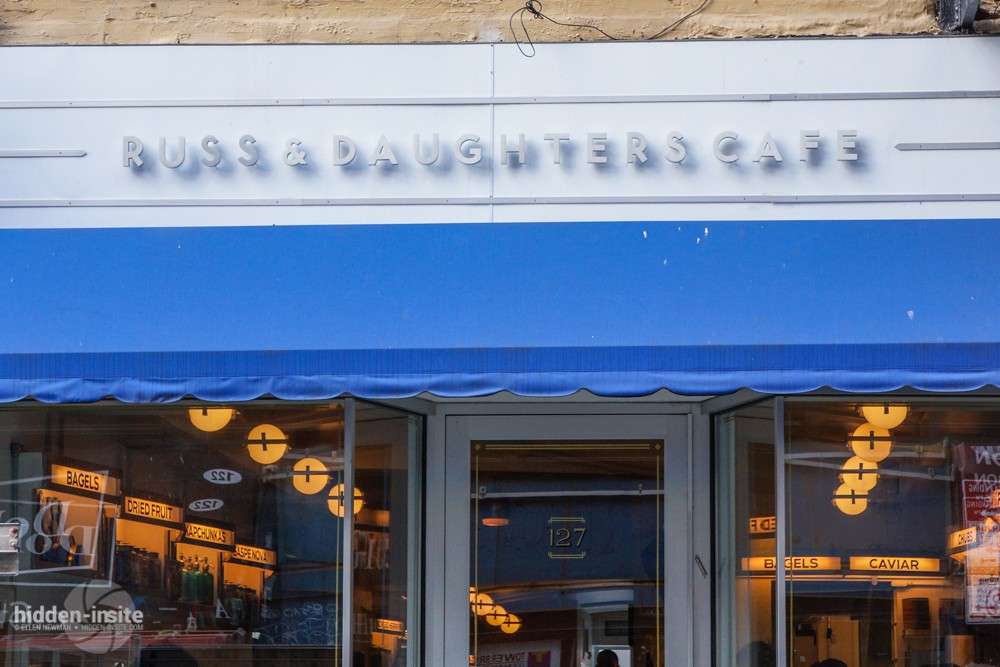 After our excellent lox and bagel, we asked for a dish of halvah ice cream. Topped with crumbled halvah, pine nuts and salted caramel sauce, it was tasty with a nice tahina flavor. It wasn’t just vanilla ice cream with a hint of halvah, but the real thing. Definitely a contender. 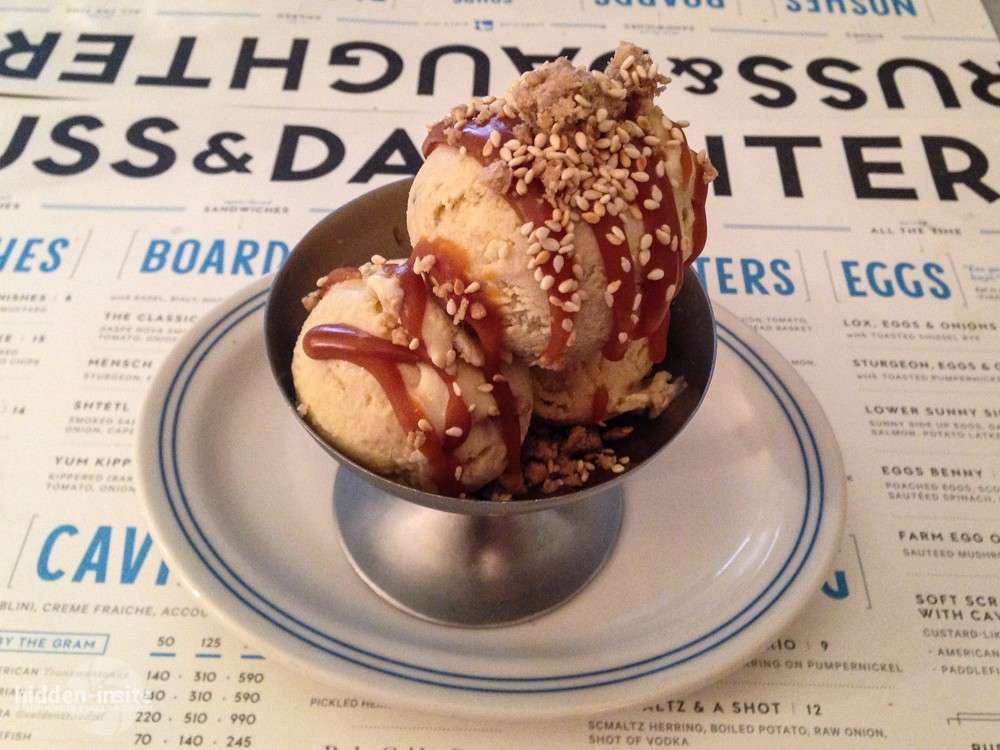 But Taboon, named after a traditional domed Middle Eastern bread oven, was amazing with its grilled fish and Mediterranean style salads. With barely enough room for dessert we ordered the silan, which the menu describes as “vanilla ice cream layered with puffed rice and date honey sprinkled with caramelized pistachios and topped with shredded halvah.” Who could resist? Every mouthful was a surprise, cold, sweet and crunchy, with strands of fluffy floss halvah topping off the whole thing. Taboon is worth a detour for that dessert alone. 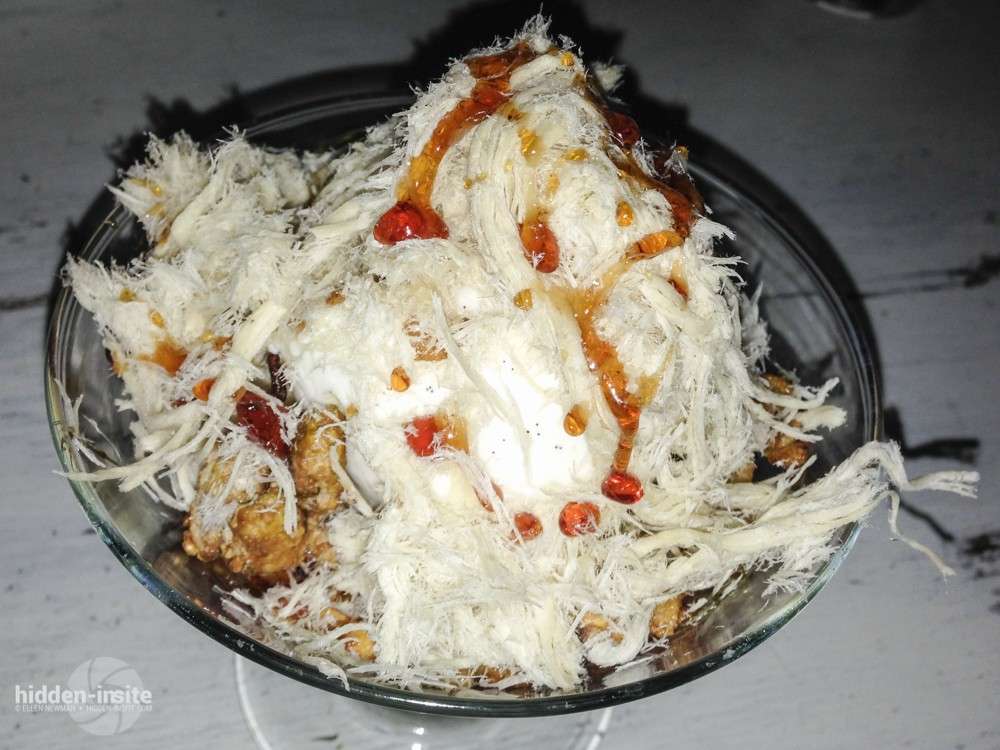 But what about regular block halvah for snacking? Joyva, now headquartered in Brooklyn, started making halvah in the Lower East Side of New York in 1907, the year before my father was born. The company’s founder, Nathan Radutzky, brought the recipe from a town in Kiev, where it had obviously traveled from Turkey. Made without dairy products, halvah became a kosher treat in Eastern Europe before it migrated to New York on the wave of Jewish immigration that included my grandparents.

Joyva was the kind of halvah my father used to buy for me at Canter’s in Los Angeles. After tasting halvah in Israel, I wanted to find out what other kinds of halvah were available. A Yelp search brought me to Atlantic Avenue in Cobble Hill, Brooklyn. Sahadi’s and Damascus Bread & Pastry Shop are on the same block, but Damascus makes its own halvah. Tasting deeply of toasted sesame, it is very, very good, flavorful and not too sweet. If you are a halvah fan, it’s worth a side trip to Brooklyn to check it out. 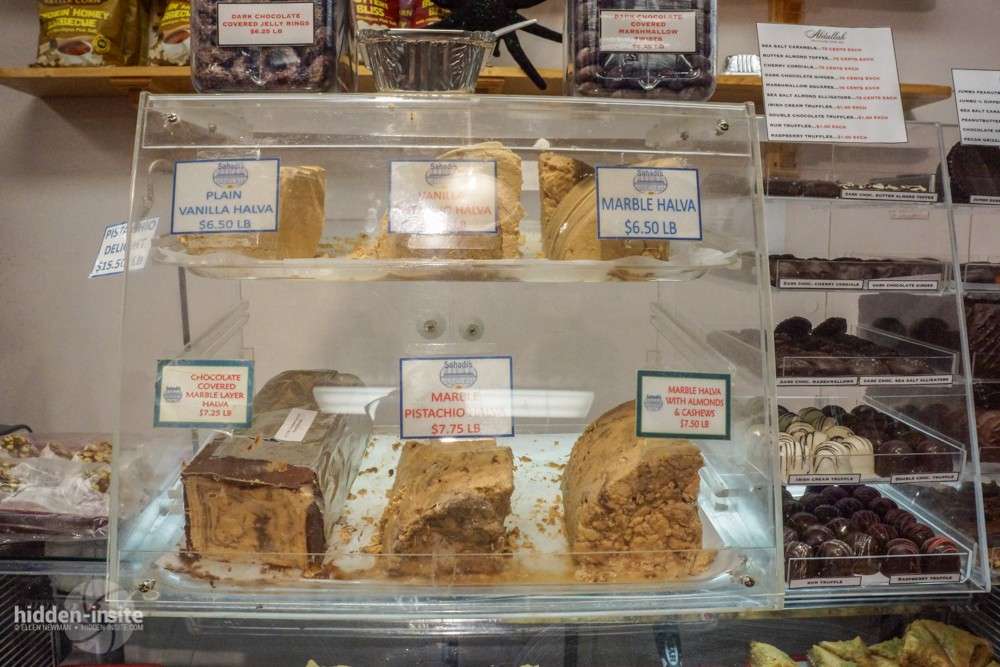 In the midst of my search a new challenger popped up, Seed and Mill in Manhattan’s Chelsea Market. I read about the shop before I had a chance to taste their halvah because the tiny shop was written up in the New York Times and several other publications when it opened early in 2016, just a few months after we discovered the halvah at Damascus. 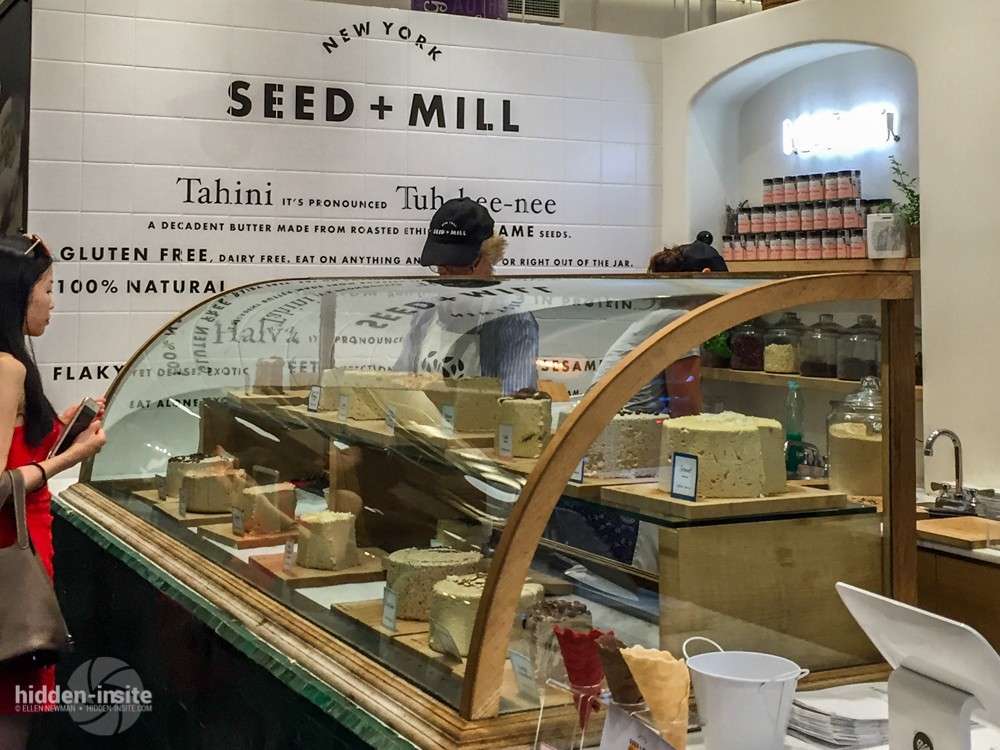 My first taste of Seed and Mill halvah, as it happened, came on a family trip to Los Angeles.

My niece Beth, who lived in New York at the time, brought three flavors of Seed and Mill’s halvah – ginger, pistachio, and Nutella with hazelnut – to Los Angeles for a family taste test. I brought two Turkish flavors, chocolate marble and pistachio, from Seven Bakery in Watertown near Boston. Turkish style vs. nouveau Israeli style, our team of noshers was ready.

Some of our nine testers, a mixed bag of boomers and millennials, had family memories of eating halvah. Paul, whose father was Armenian, remembered having halvah at the Armenian deli. Jeffrey, originally from New York, remembers eating halvah at Jewish funerals. “My dad loved it,” he recalled. For the younger crew, it was a new taste.

The two Turkish flavors were stickier than the drier, sandier, lighter halvah from Seed and Mill, which employs high-quality Ethiopian Humera seeds—roasted at precise temperatures and milled in small batches—for its halvah. The crowd favorite was Seed and Mill’s Nutella with hazelnut. “Yum, it’s smooth with a nice crunch,” my nephew Mark remarked. Jeffrey liked the texture. Beth and I liked the ginger with the chopped candied ginger in every bite. 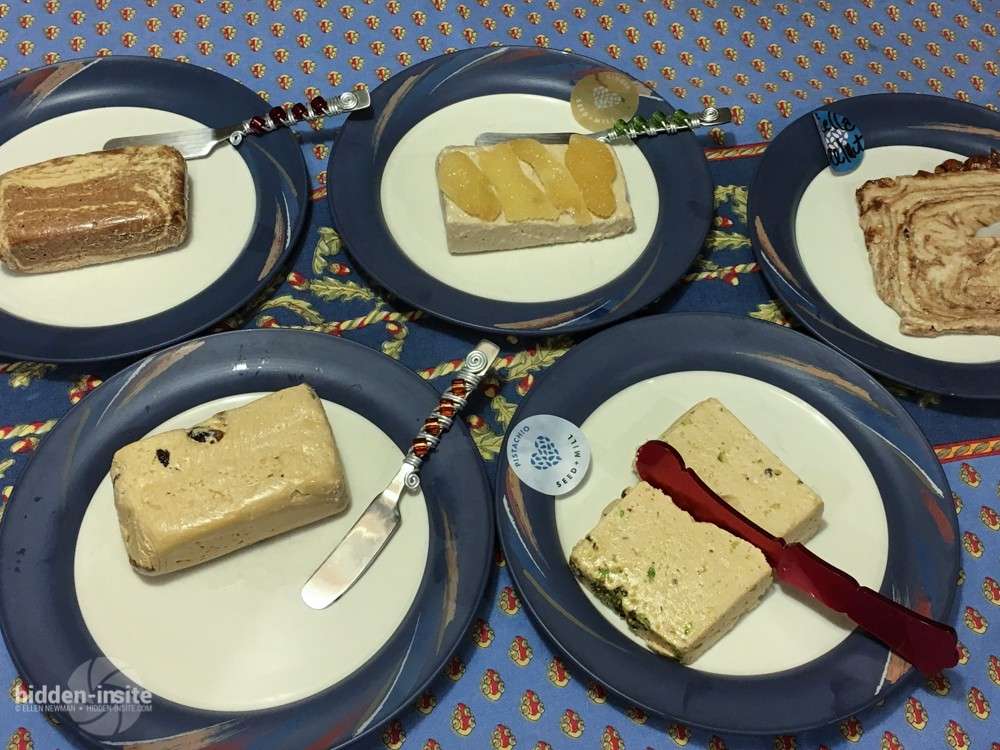 You couldn’t have found gourmet flavors like Seed and Mill’s 70 % dark chocolate, cardamom, chia or date at Canter’s when I was a child. There was only marble. Not even pistachio, a staple flavor in the Middle East. But that marble halvah was enough to get me started on a search that spanned several cities over several months. Thanks Dad for introducing me to a treat that inspired a worldwide search.

We packed the leftovers from the family tasting in our carry-on bag for the flight home to San Francisco from L.A. Imagine our surprise when that bag was singled out for an up-close and personal look by TSA. As the agent carefully and politely unpacked the bag item by item, I realized the blocks of halvah had caught the scanner’s eye. That’s when I noticed the agent’s name, Nassir, and realized that he was Middle Eastern. “It’s halvah,” I said, worried about missing our flight. He allowed himself a faint wistful smile.

“Would you like a taste to make sure?” I asked.

“No thank you. It’s not worth my job.” Probably not. But it’s definitely been worth our multi-city quest.

What food tops your list for a multi-city search? Let us know in the comments below.