Searching for Heavenly Halvah in the Holy Land

Sometimes one line in a guidebook or magazine can spark an odyssey. On our 2015 trip to Israel two tiny listings set off what evolved into a multi-city, intercontinental search for the best halvah.

A sweet confection usually made of sesame paste and honey or sugar, halvah is an ancient desert dessert indigenous to the Middle East, most likely Turkey. Like the people of the region, who have migrated across the globe as traders, conquerors and refugees, halvah has had its own diaspora, which has carried the candy from the bazaars of Turkey to the Balkans, Eastern Europe, India and Los Angeles, where I was smitten from my first taste.

In my earliest memories of halvah, I am about three years old, a moppet with Shirley Temple curls. I remember holding my father’s hand and looking up to the top of the deli counter at Canter’s on Fairfax Avenue. On the top shelf, above the smoked fish, chopped salads, cold cuts and gooey pastries, was a magnificent round wheel of marble halvah. “Daddy, please,” I would beg. If I was behaving and he was in a good mood, he’d ask the deli man to cut a half-pound wedge of sweetness to take home along with our lox and bagels.

I pretty much forgot about halvah until I started researching our trip to Israel. Two references piqued my interest. The first was a short item about a halvah martini served in a bar in Tel Aviv. The second marveled about the 30 kinds of halvah available at the Machne Yehuda market in Jerusalem. That … and the desire to have at least one non-political topic to research and write about … was enough to initiate a quest that started in Israel and continued stateside once I got home.

The first day or two in a new city in a new country is an orientation process. Although I try to seek out the unusual, I often gravitate to the familiar. That’s why old-style public markets in new cities are such an attraction. It’s easy to bounce from novelty to comfort and back again with food as an easy bridge.

Carmel Market sprawls over two dozen city blocks centered around HaCarmel Street. Jews and Muslims alike shop for a bounty of veggies, fresh flowers and a rainbow of fragrant spices like turmeric, sumac and za’atar. Hawkers bark their pitches in Hebrew, Arabic and occasional English, tempting the crowds to buy rice mixes, candied nuts, kosher meat, fish, and fresh breads, pita and pastries. There were olives, pickled vegetables and bins full of herbs I didn’t recognize. It was all so enticing. But, breakfast first, shopping later, we had to remind ourselves. 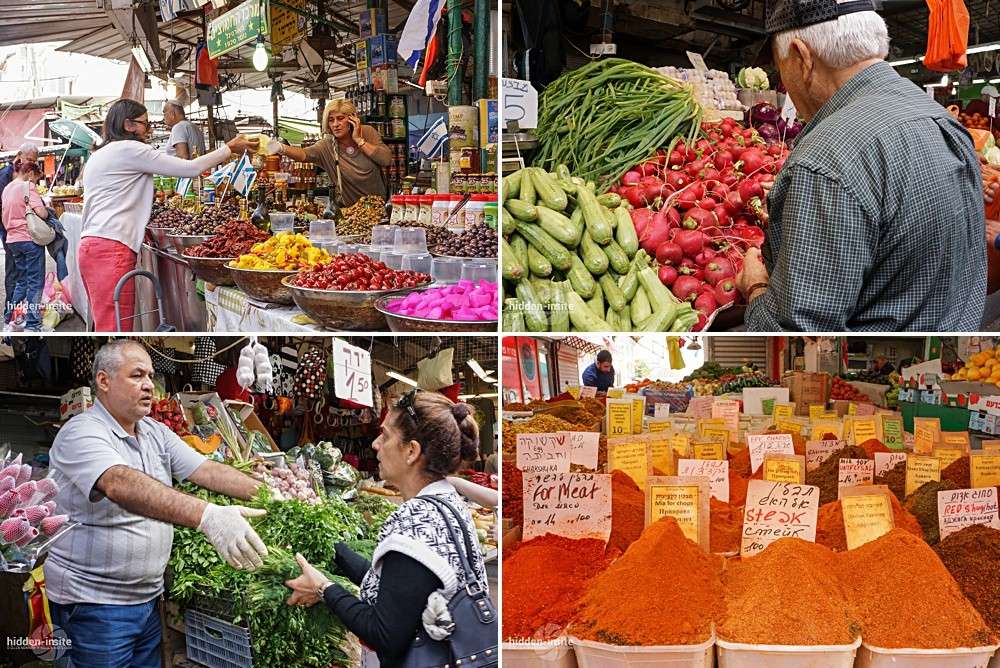 A corner grill, with four stools and bowls of roasted tomatoes, peppers, zucchini and eggplant on the counter, looked good. We tried the popular middle-eastern shakshuka (eggs in tomato and red pepper sauce) and merguez (lamb sausage). Sated with savories, we were ready to find some halvah. 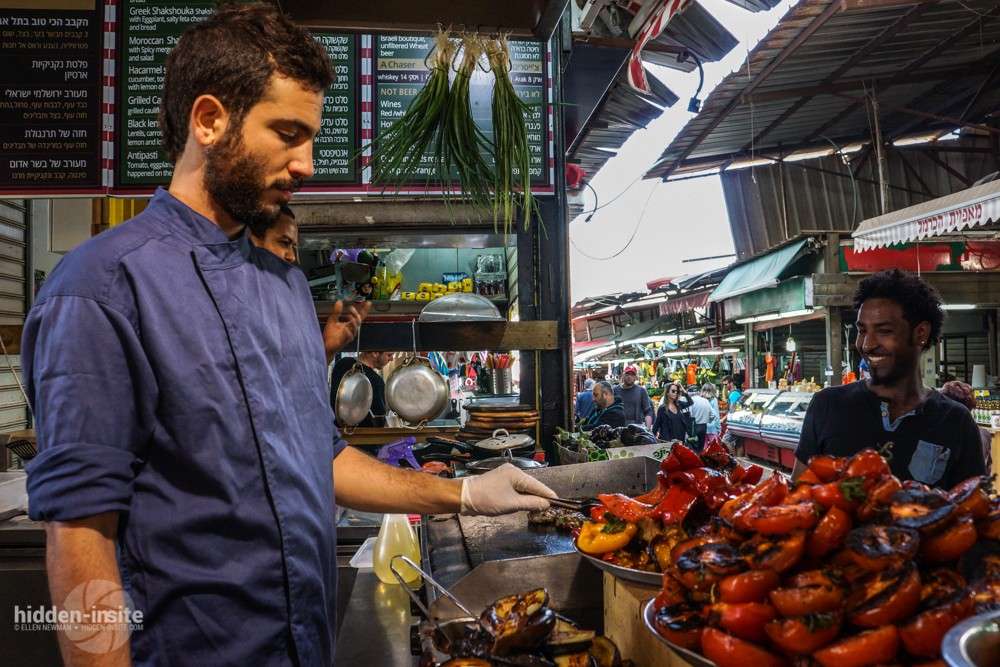 We didn’t have to go far. While we were eating, vendors had set up a couple of tables right behind us loaded with foot-long halvah bricks and confections we’d never seen before. We went from shakshuka to halvah in ten easy steps. 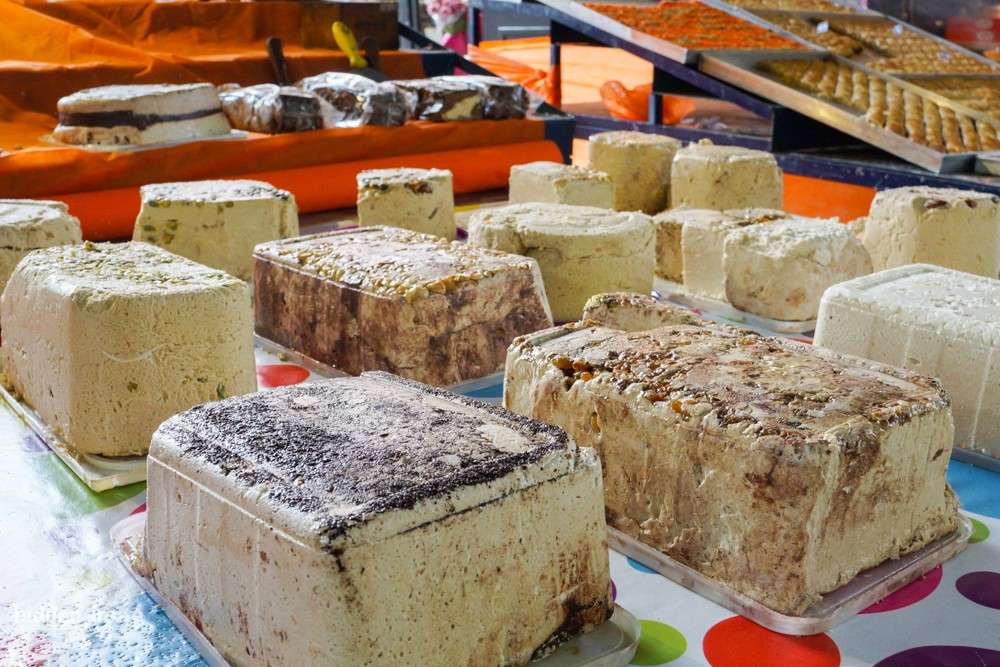 Well, maybe not so easy. The guy in charge either didn’t or wouldn’t speak English. He barked at customers who were too slow making up their minds. That would be me, totally intimidated. While we stood there, he cut neat kilo and half-kilo blocks from about two-dozen bricks of different flavors for shoppers who knew what they wanted. His partner, an attractive raven-haired woman with her curls gathered into a pouf on top of her head, finally realized we wanted tastes. 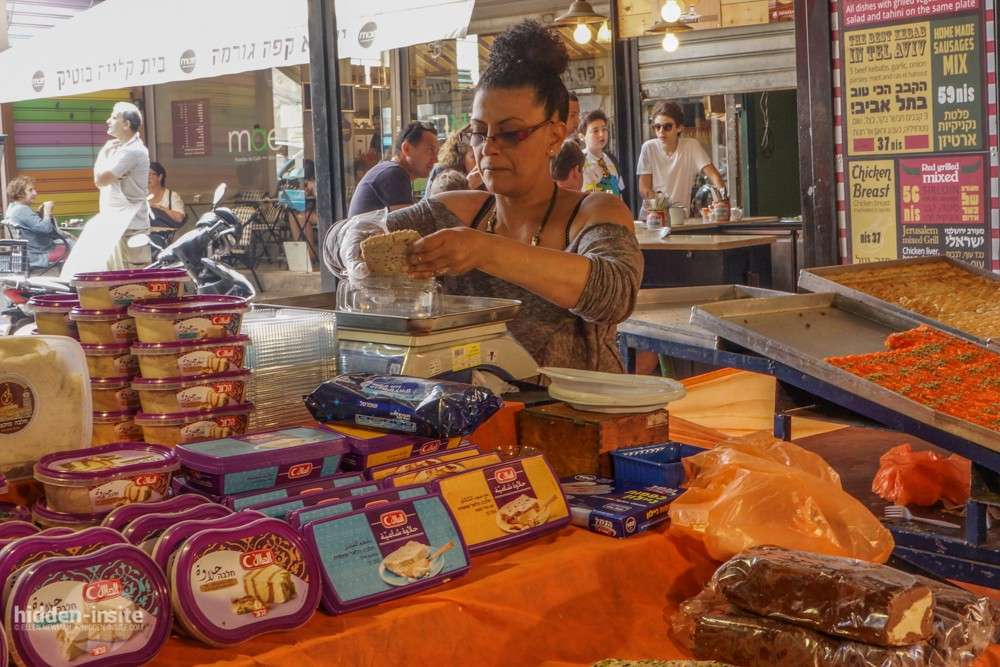 Patiently she cut us pieces flavored with coffee, pistachio, marbled chocolate and vanilla, almond and one with chocolate liqueur and chocolate chips. The chocolate chip halvah tasted like a dream, with its earthy base of sesame paste and double hit of chocolate. Its sweet, sandy first bite transported me back to Canter’s, while the lingering chocolate liqueur aftertaste was purely adult. As she packed up a half-kilo piece for us, we asked where their halvah came from. “Nazareth,” she said. “The best halvah comes from Nazareth.”

Desert treats in the Jordan Valley

But Nazareth wasn’t on our route. It’s on the west side of the Sea of Galilee, and our guide, Richard Wolfe, took us down the east side because we had asked to stop at a kibbutz where family members had donated a clinic years ago.

Richard, sensing my disappointment at missing the halvah in Nazareth, arranged a quick detour to the dusty town of Kineret at the southern tip of the Sea of Galilee, where the water flows into the River Jordan. “I know a store you’ll like,” he offered. “They’ll have halvah there.” 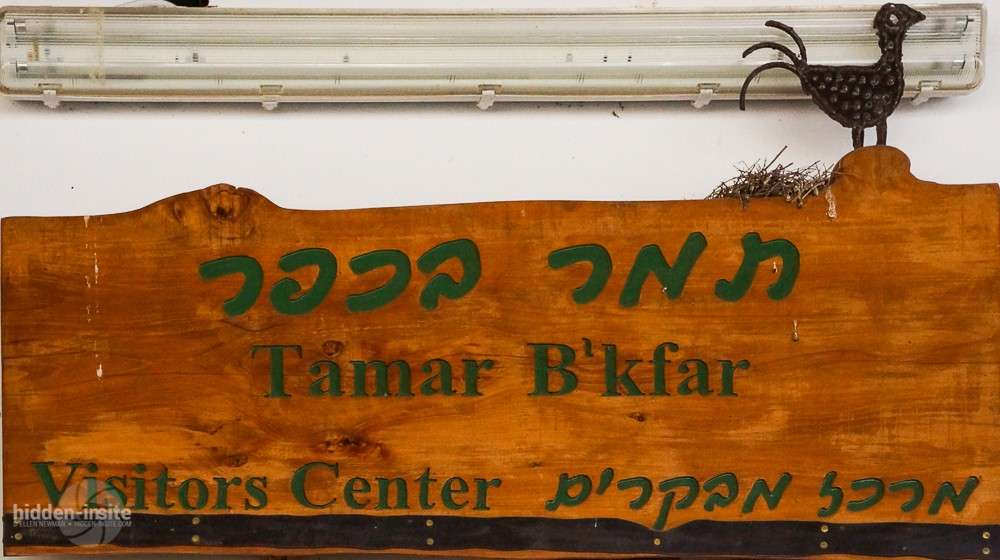 Tamar B’kfar, a gourmet store seemingly in the middle of nowhere, reminded me of similar small shops filled with locally grown and produced specialty items that dot California’s back roads. The store, part of a family farmstead that has been cultivating dates for more than 100 years, overflowed with bottles of wine and olive oil, jars of local honey, dates, nuts, dried fruits, and confections, including plastic containers filled with already cut halvah. 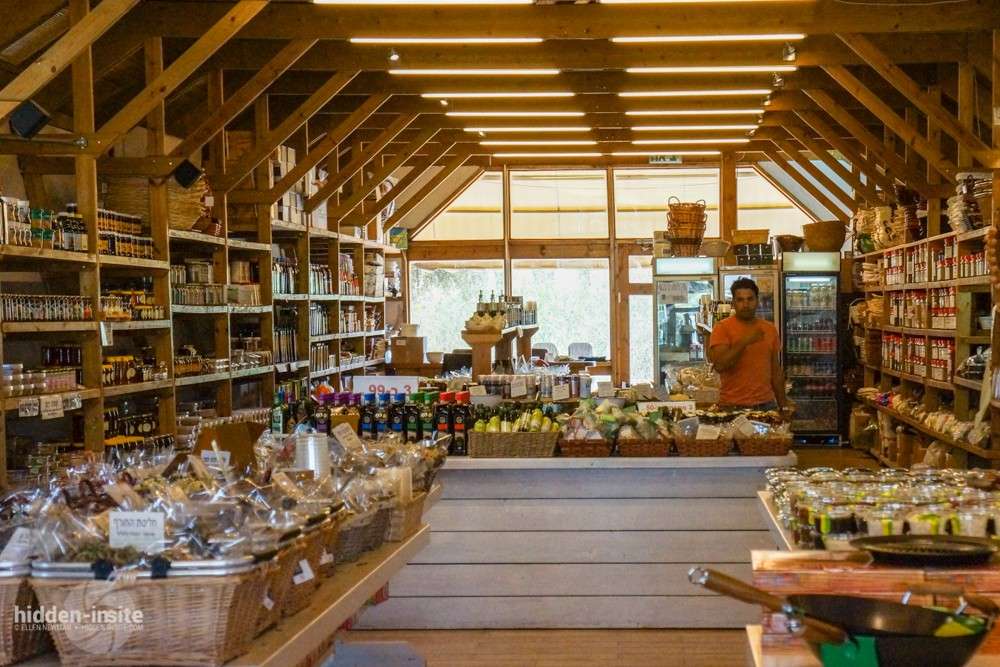 Our real discovery at Tamar B’kfar was something I’d never tasted before – floss halvah. Extruded in long fluffy pieces like sesame linguini, floss halvah reminded me of a cross between string cheese (in texture) and cotton candy. Sweet and earthy at the same time, it tickled my tongue as it melted in my mouth. Naturally a tub of floss halvah made it into our shopping cart. Ido from Tamar Bakfar confirmed that their halvah is also from Nazareth because “it’s the best.” 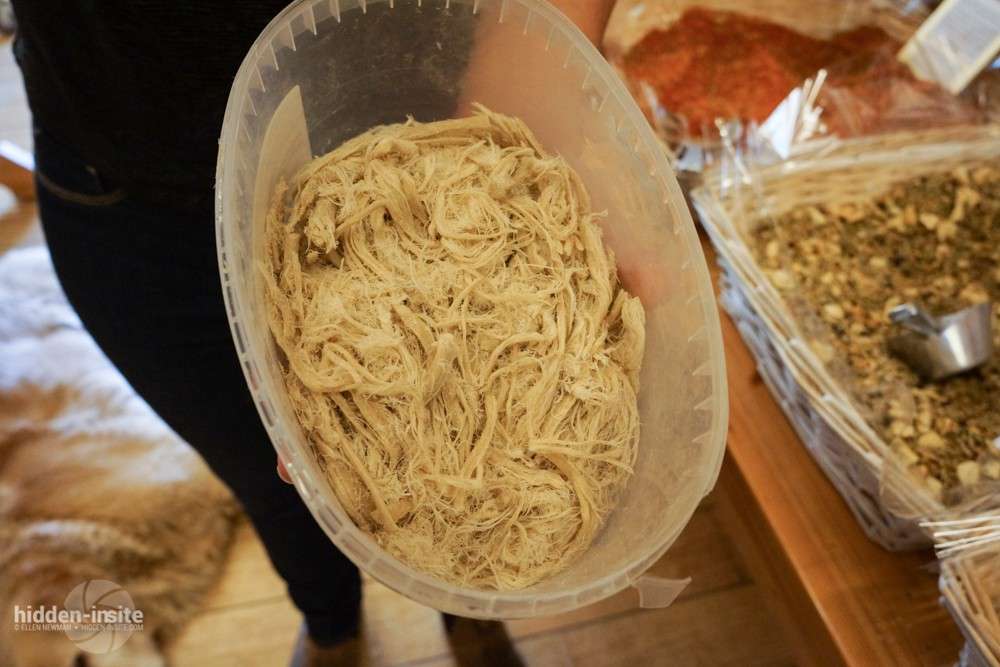 Still curious about the best halvah from Nazareth, once home I did a little research. The Nasser family in Nazareth opened their company, Nazareth Factory, more than 40 years ago, starting as a small shop. They have since expanded into more industrial production employing 18 people, and it seems as if they offer tours. They are not only the inventors of the awesome floss-style halvah, but in 2009 they were listed in the Guinness Book of World Records for making the largest ever halvah, beating out a Greek company that had held the record for years. I still don’t know whether the halvah we bought at Carmel Market was from Nazareth Factory or not. I just know it was really good.

From Kineret we headed south to Jerusalem, the halvah packages at our side for quick snacks on the long ride along the River Jordan. I could imagine traders on caravans popping pieces of halvah for quick energy when they stopped for tea along the way.

We made it to the bustling Machne Yehuda, Jerusalem’s traditional market in the Jewish side of town, on our second day. As we wound our way through the stalls and restaurants, we were accompanied by Ouria Tadmor, a photo guide who was giving us lessons in street photography. Midway through the morning, we came across the Kingdom of Halvah, the shop mentioned in the article I had clipped before the trip. 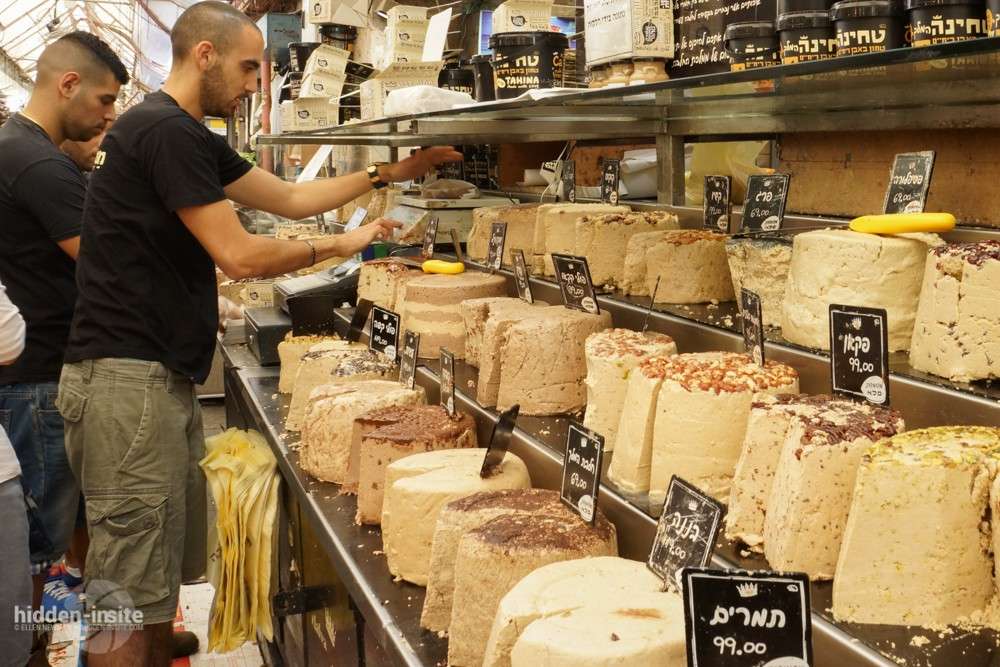 Ouria, a big halvah fan, was eager to translate. In Hebrew Ouria asked Shlomi, the great-grandson of the company’s founder, about halvah. “My great-grandfather started the company in Morocco,” Shlomi told us. “When he emigrated to Israel he opened a shop in the Old City.” He moved his shop to Machne Yehuda in 1948 when Jews were expelled from the Old City. 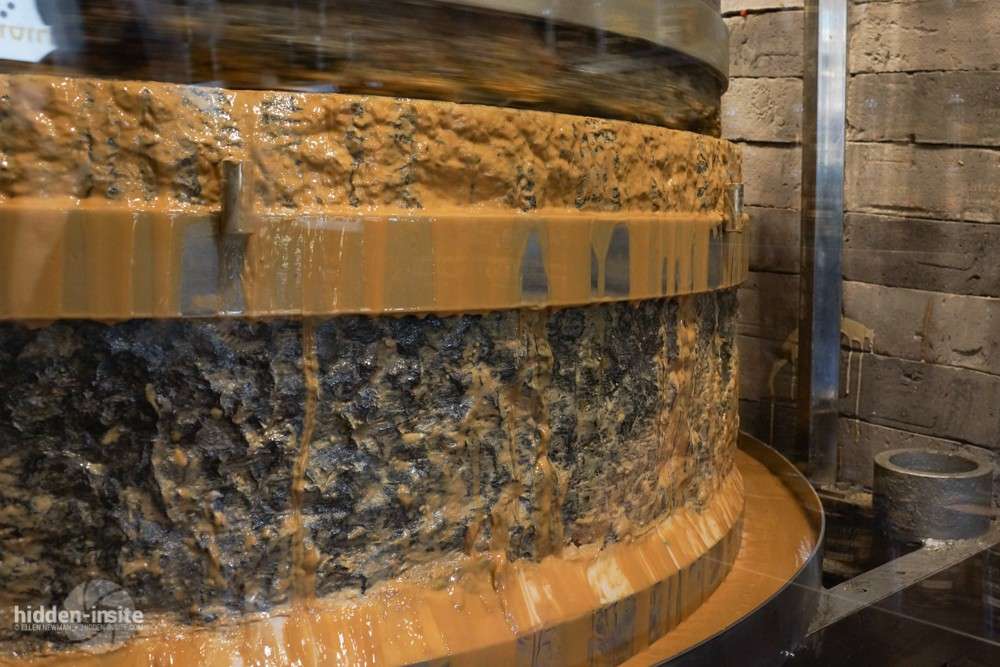 “The uniqueness of the halvah from the Kingdom of Halvah is that it is made with 80% sesame and 20% sugar and other natural ingredients,” Shlomi said. “We now have 101 flavors.” The company recently won a championship for a flavor with 10 different spices. When I asked more about the history of halvah worldwide, Shlomi and Ouria told me that halvah was invented by the Turks, perhaps 3000 years ago. “Turkey is the real kingdom of halvah,” they laughed before Shlomi passed us samples. 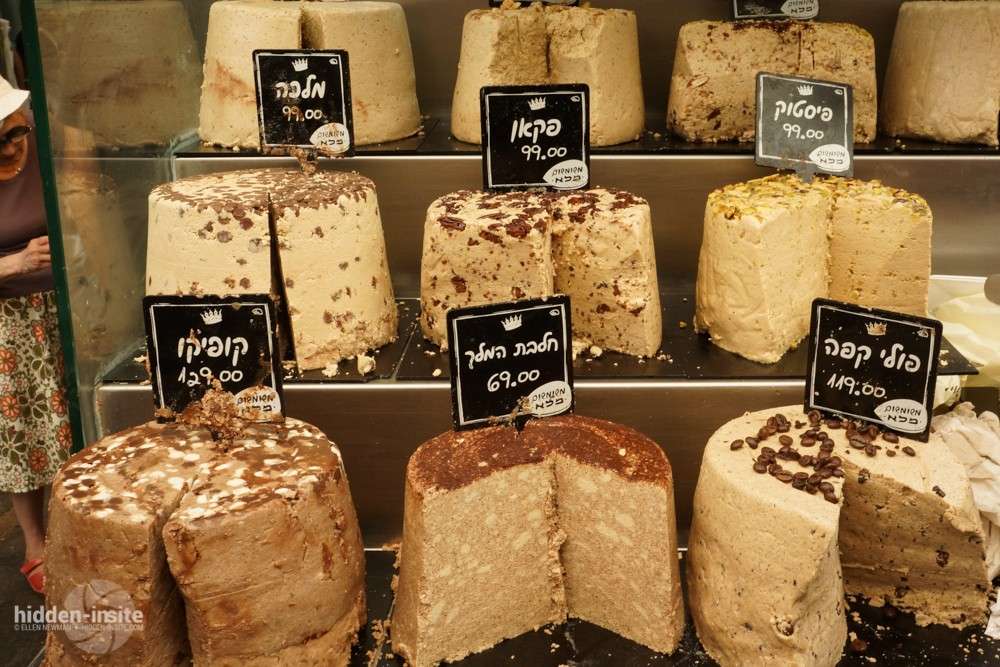 After a few tastes I remained enamored with the halvah from Nazareth by way of the Carmel Market in Tel Aviv. It had rounded, more complex flavors. But halvah is candy, after all, and I’ll never complain if someone passes me a tray with pieces of halvah from the of Kingdom of Halvah in Jerusalem. 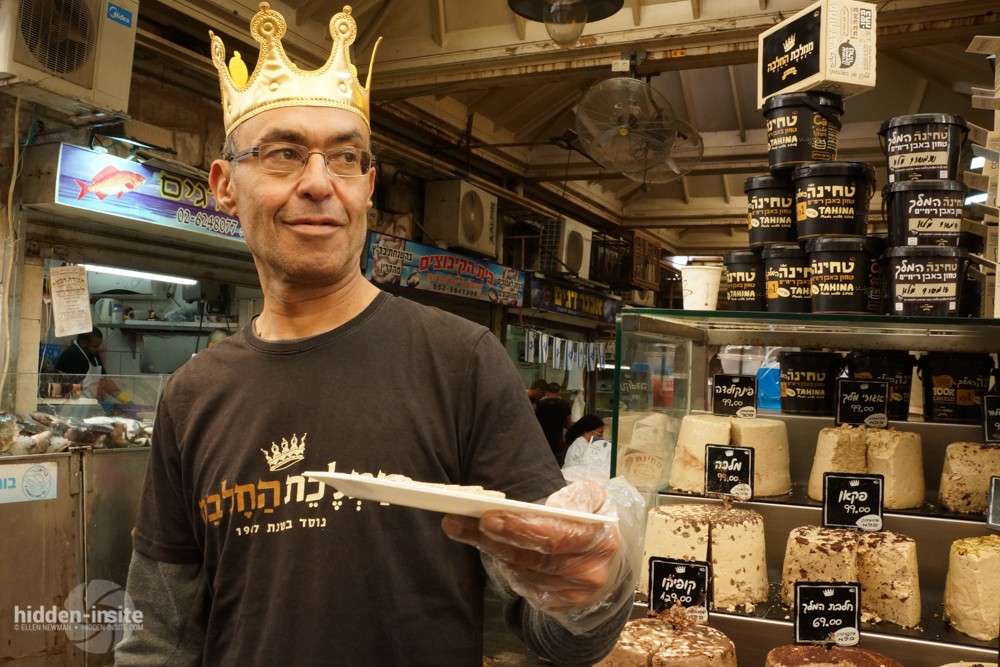 Back in Tel Aviv for our flight home, we crammed as much halvah into our carry-on bag as we could take home. But our quest for perfect halvah didn’t end in Israel. It resumed once we got home with strong contenders from New York and Boston. You can read more about that contest here.

Have you ever gone on a quest for a favorite food on your travels? Let us know in the comments below.