If you’re driving Highway 395 between Lone Pine and Big Pine in eastern California, you can easily miss Manzanar. All you see between the road and the looming mountains to the west are a few low buildings and an American flag bright against the sky. It would be easy to pass it by as you traverse the scrubby high desert of the Owens Valley, once filled with fruit orchards before Los Angeles bought up the rights to water from the Owens River. You could call the area desolate. 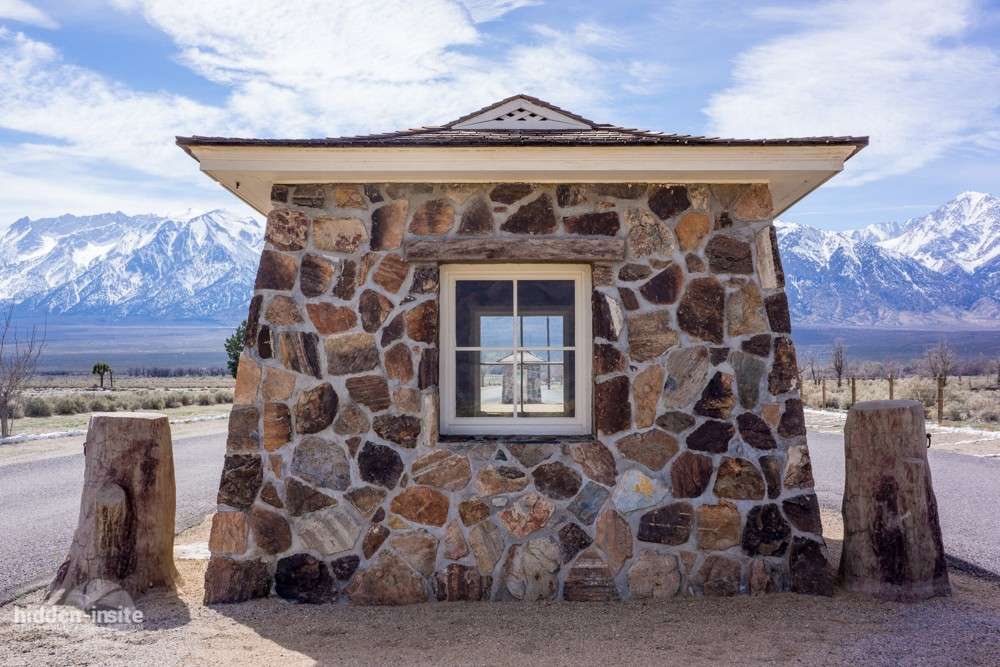 Japanese-American internee Ryozo Kado, a Los Angeles stone mason and gardener, built the sentry posts at the entrance to Manzanar.

I came to Manzanar to bear witness. I got my first inkling of what happened there as a child in Los Angeles. Like many middle class families in LA, my parents hired a family of Japanese gardeners to tend our garden. Frank and his sons parked their sturdy pickup on our block twice a week and fanned out to several homes to mow lawns, trim trees and pick weeds. In season they planted flowers or raked leaves from our giant sycamore tree.

One day my mother mentioned that Frank and his family had been sent away during the war. I only vaguely understood what the war was, but by then I knew that in Europe it was very bad for the Jews, and that we were Jews. It seemed that Frank’s family was sent away because they were Japanese. But it didn’t make sense to me. “That can’t be true,” I protested to my mother. “This is America. That can’t happen here.”

Well, it can and it did happen here. On February 19, 1942, a mere ten weeks after the bombing of Pearl Harbor, President Franklin Roosevelt signed Executive Order 9066, which directed the secretary of war and military commanders to define areas “from which any or all persons may be excluded” at their discretion. The entire West Coast of the United States, but not Hawaii, was so deemed. That decision led to the incarceration of 120,000 men, women and children of Japanese ancestry in ten “war relocation centers” in remote areas around the country. 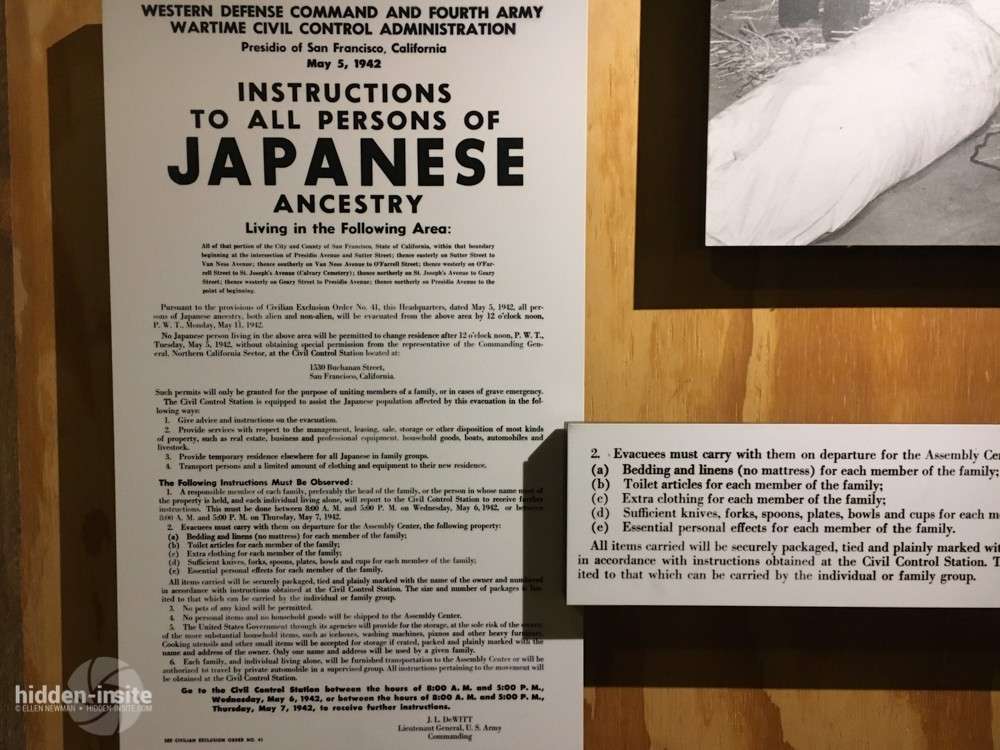 A majority of the internees – about 70,000 people – were born in the US and thus were American citizens. Similar actions were not taken against Italians or Germans living in the US, despite our also being at war with those countries. Only the Japanese were assumed as a group to be security risks and regarded as enemy aliens who needed to be quarantined. The Manzanar War Relocation Center, now the Manzanar National Historic Site, was one of the ten camps where the Japanese population of the West Coast was forced to wait out the war in a confluence of fear, war hysteria and racism.

The first thing I noticed at Manzanar was the dry desert wind. Fine dust swirled in small eddies. In late winter the path from the parking lot to the visitor center sported blooming cherry trees, both an anomaly against the snowy peaks and an homage to the people who lived here from 1942 to 1945. 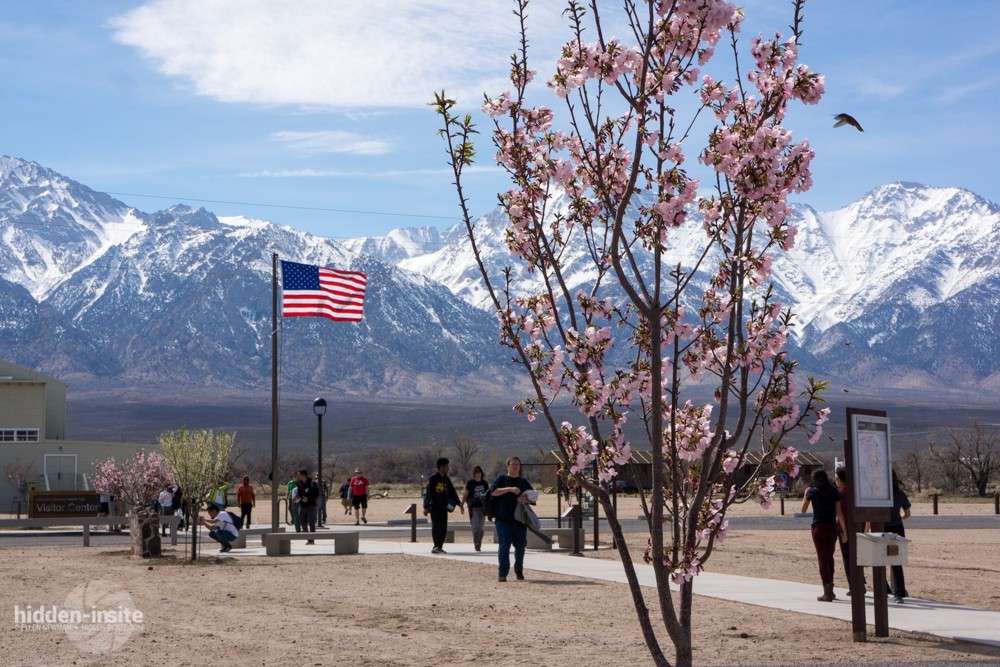 People who had freely been living their lives as gardeners like Frank, businessmen, shopkeepers, farmers, mothers and students were given just two weeks to pack what they could carry and report to temporary assembly centers, including the Tanforan and Santa Anita racetracks, where they were housed in horse stalls with no heat or hot water before being shipped off to the camps. Many sold businesses and property at steep losses and had to leave behind beloved homes, family photos, letters and heirlooms. I can’t imagine the sense of loss, shame and grief at being torn away from their lives and the fear they must have felt about where they were being sent. 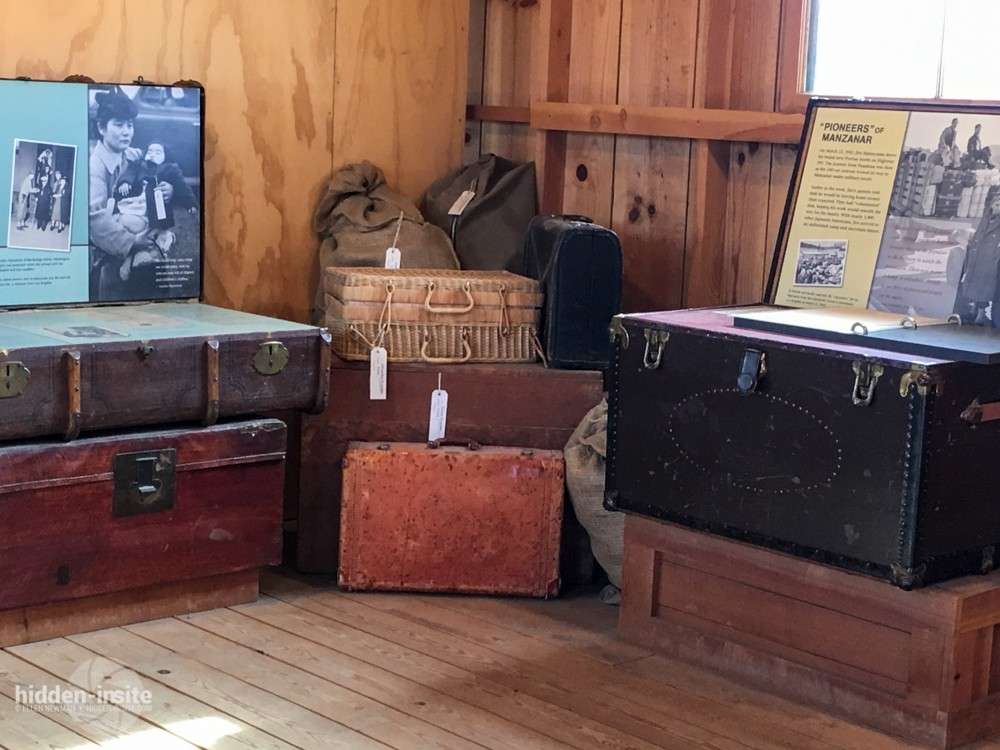 Life for Japanese-Americans at the Manzanar War Relocation Center

At Manzanar nearly 10,000 people were suddenly confined within a square-mile space behind barbed wire punctuated by raised guard towers. The internees were housed in 36 blocks, each with 14 barracks made of wood and tarpaper, a mess hall, laundry room and men’s and women’s latrines. They left comfortable homes to sleep on army cots with army blankets. The tight quarters, the lack of privacy, the weather—hot in the summer, cold in the winter and always windy and dusty—was a shock. So was the sense of betrayal that came when people realized that being a citizen didn’t matter. 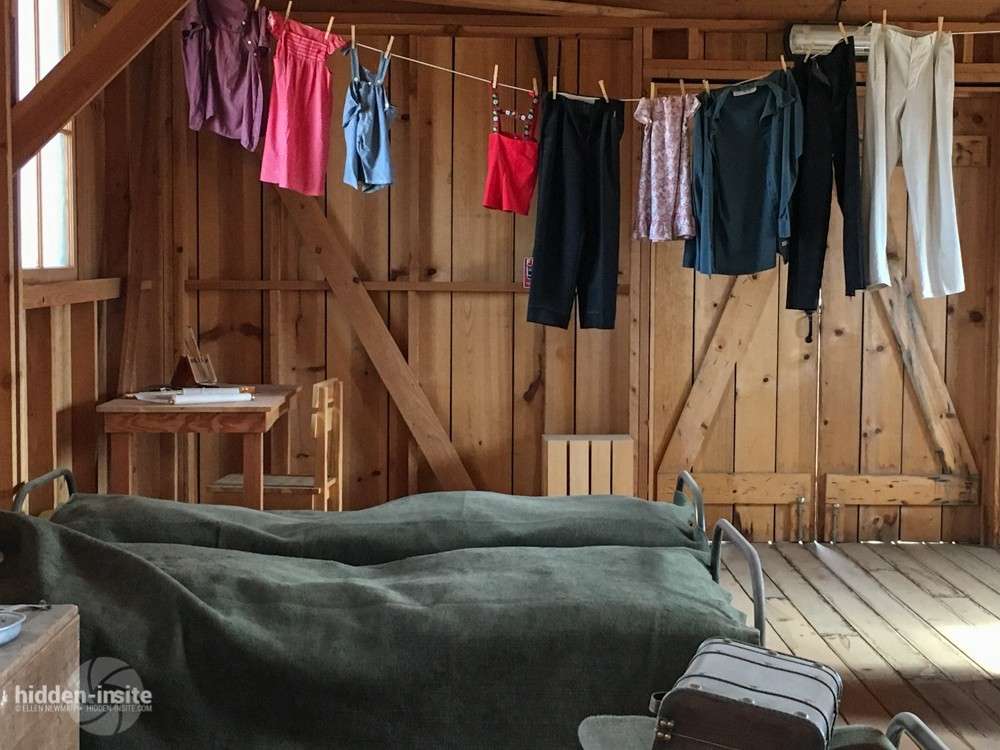 My first stop after our three-hour drive from Death Valley was, of course, the restroom at the visitor center. There an exhibit-sized photo of the historic latrines, lined up in a row with no partitions and little space between them, offered my first shock of the day. I don’t even love standard public restrooms. Having to use facilities so publicly would have been a daily humiliation. Was that necessary to the war effort? Were there so few materials available that dividers couldn’t be built? Was this bit of public humiliation extra punishment for people who were guilty of nothing but their Japanese ancestry? 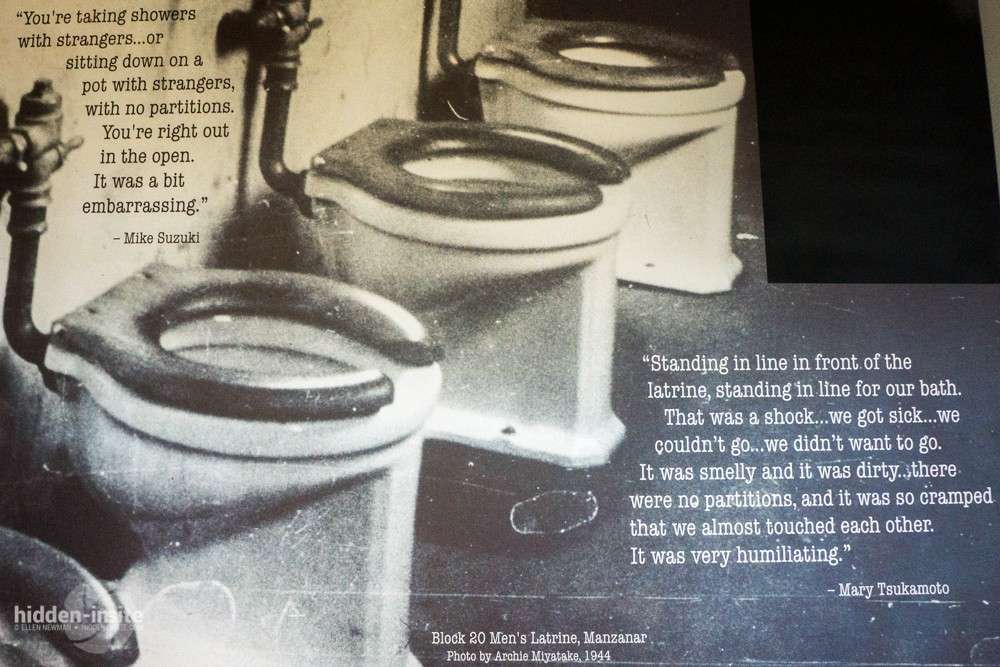 The visitor center looks modern, but it was built in 1944 as the Manzanar high school gym, auditorium and community center. The exhibits detail life from the time of the executive order and the dislocation of the Japanese community to life at Manzanar. It is a well-documented place, with now-historic photos taken by such luminaries as Ansel Adams, Clem Albers, Dorothea Lange and Toyo Miyatake. A former student of Edward Weston, Miyatake was relocated to Manzanar. Thinking ahead, he smuggled in a photo lens and later had a box camera built so he could photograph life at the camp. The exhibits brim with photos and quotes about life in the camp.

My attitude changed because I thought it’s sort of like an adventure for a teenager … but when I started seeing that my dad is losing his business, we’re losing all our property. He lost his new car that he worked so darn hard for. What for? … Then when finally we went to camp is when I realized the injustice of the whole thing.

With below-freezing temperatures, early arrivals had no heaters; nor was there protection from the severe dust which came pouring through the openings in the eaves, the wide cracks in the floors. By night, sleepers could gaze up at stars through knotholes and slits in the roof.

Children have not seen a kitchen stove, a bathtub, a family dinner table or the privacy of a back yard for two years…Their poems, stories and pictures reflect a barren world of watchtowers, barbed wire fence, tar-papered barracks, desert flora and high mountains capped with snow.

People walked the roads, tears streaming down their troubled faces, silent and suffering. The little apartments were not big enough for the tremendous battle that waged in practically every room.

On the grounds behind the center two barracks and a mess hall have been recreated so visitors can get a sense of life at Manzanar. Seven or eight people, sometimes strangers, were assigned to small rooms in the rows and rows of barracks. There was virtually no privacy. Beds were cots. Eventually residents were allowed to make simple furniture from scraps of lumber and fruit crates. They used bedspreads or colorful prints to divide their allotted space into rooms. Later they were allowed hotplates and some dishes so they could approximate family life. 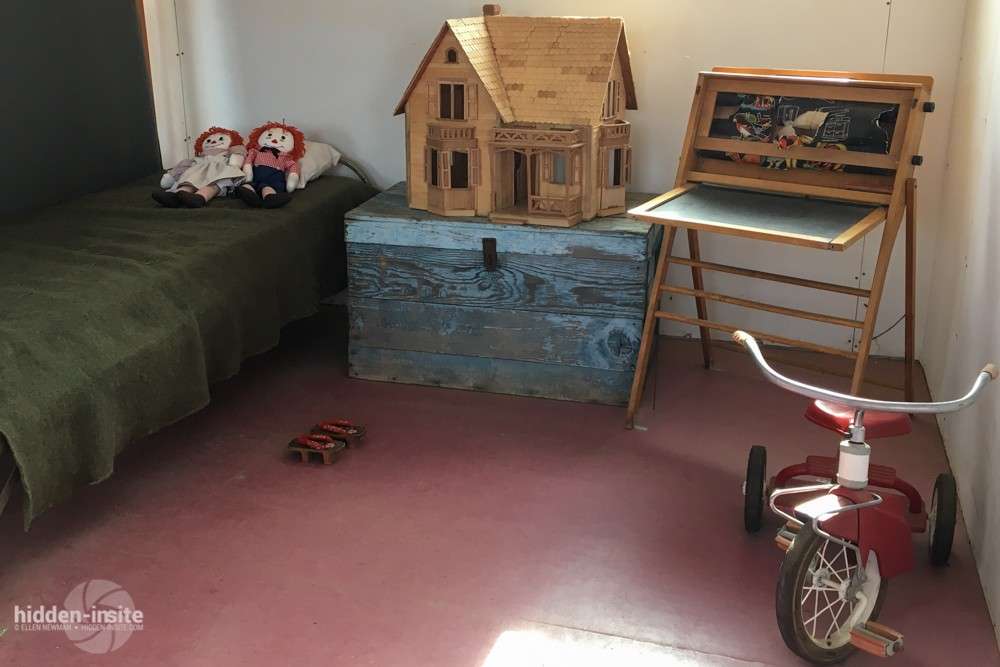 As time went on, community life developed. There were schools for the children and medical facilities for the infirm. People had jobs at Manzanar. Many worked weaving camouflage nets for the war effort; others raised chickens or farmed. By 1944 the camp was nearly self-sufficient, with businesses repairing shoes and typewriters and producing soy sauce and tofu. Others made uniforms and work clothes for camp staff and built furniture, baby cribs and toys. Their pay of $16 a month was tied to soldiers’ pay. And within six months of arriving, the more than 400 landscape professionals incarcerated at Manzanar (people like Frank) began to transform the barren desert into gardens, with streams, ponds and graceful bridges. Although the garden areas today are mere remnants of rock and stonework, it is well worth a drive toward the mountains to see what residents did to make their lives more bearable. 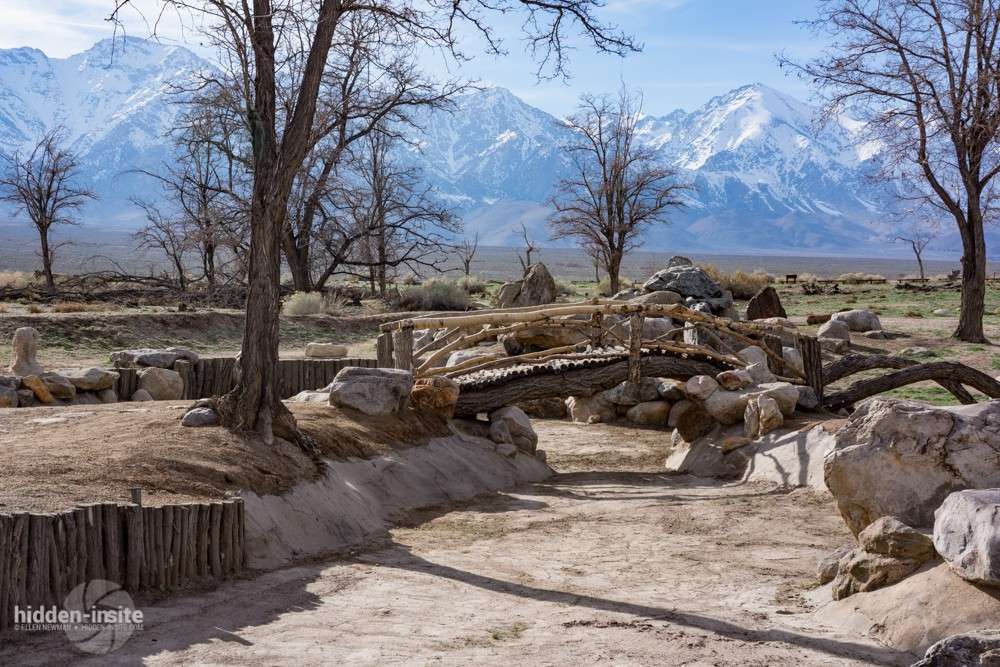 The injustice of Manzanar lives on not only in the disrupted lives and patina of shame that has persisted for more than 75 years, but also in the nation at large. The whole exercise was a product of the fake news of the day, a time when facts didn’t matter. The West Coast was a hotbed of anti-Asian sentiment, with a history of segregated schools and laws forbidding land ownership. After the bombing of Pearl Harbor, the press served up stories and editorial cartoons that agitated people into believing that the mainland might be attacked. In fact, the military knew that no such attack was going to take place. Japan did not have the capacity to carry out such an attack. Its goal had been to disable the Allies’ fleets in Asia, which it did at Pearl Harbor, Singapore and the Philippines, all on the same day. The West Coast was safe, but it didn’t matter.

What did matter was that 120,000 people, most of them American citizens, were incarcerated based on fear and fake news. Eventually, when Ronald Reagan was president, a congressionally authorized commission concluded that “race prejudice, war hysteria and a failure of political leadership” led to what happened at Manzanar. The US government issued letters of apology and offered $20,000 in reparations to former internees. The gesture was not enough, of course, but it publically acknowledged the wrongs that were committed. 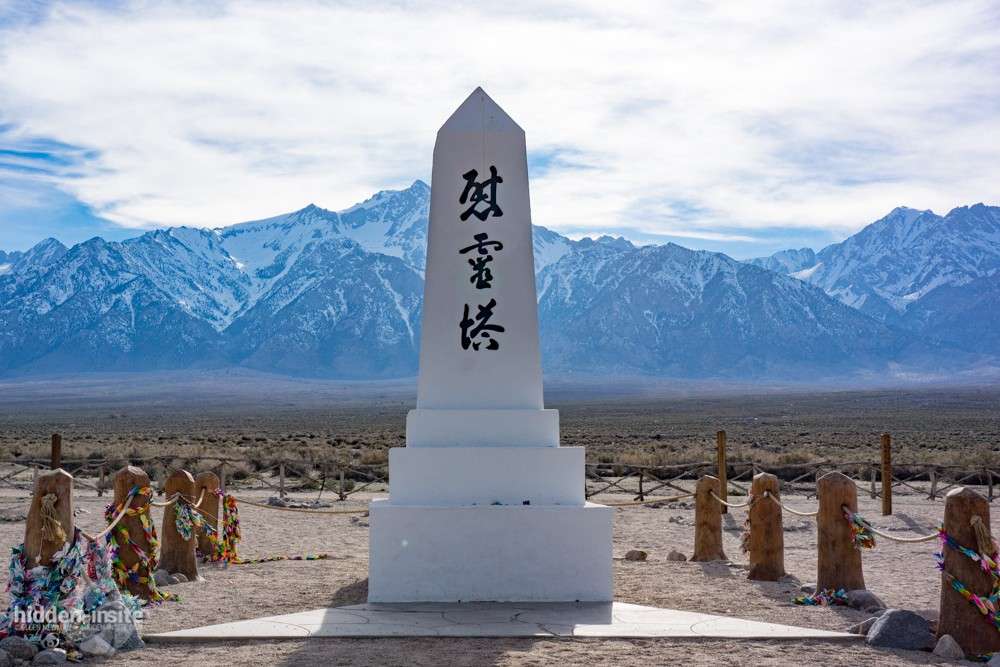 Ryozo Kado built this cemetery obelisk in 1943. Services were held here until the end of the war. Now it is the gathering spot during the annual pilgrimage to honor the 120,000 people of Japanese ancestry who were torn from their homes and relocated to the Manzanar War Relocation Center.

The hidden insight of Manzanar for today’s America

The sad truth is that the temptation of Manzanar is still with us. Current fears about Muslims who might be terrorists or Hispanics who might be drug dealers have entered the national conversation in insidious ways. One US senator even suggested that the precedent of Manzanar could be used today to isolate Muslims in the US. The World War II experience of incarcerating the Japanese population must never be a justification for inflicting similar injustices on other peoples.

As I told my mom with the certainty of a ten-year-old, “This is America.”