It’s all Steven Spielberg’s fault. If he hadn’t chosen Al Khazneh (The Treasury) in Petra in southern Jordan for the climactic scenes of “Indiana Jones,” I would never have heard of the secret city. But once I saw the amazing red sandstone carvings in film, I knew I had to see it for myself.

Luckily, once the film’s popularity turned the ancient ruins into an international bucket-list item, a tourist infrastructure has grown up to accommodate the nearly one million visitors who tour Petra each year. We traveled with Desert Eco Tours, which operates in Israel, Jordan and Egypt.

We were picked up at our hotel in Eilat at 6 a.m. Sleepy, with boxed Israeli breakfasts in hand, my husband David and I boarded an open Jeep on our way to the Israeli-Jordanian border. The driver, a jovial Israeli, explained that Ali would be our guide for the day. “Ali is a great guide, but he talks too much. You’ll see,” he laughed as he dropped us off to walk across the frontier. 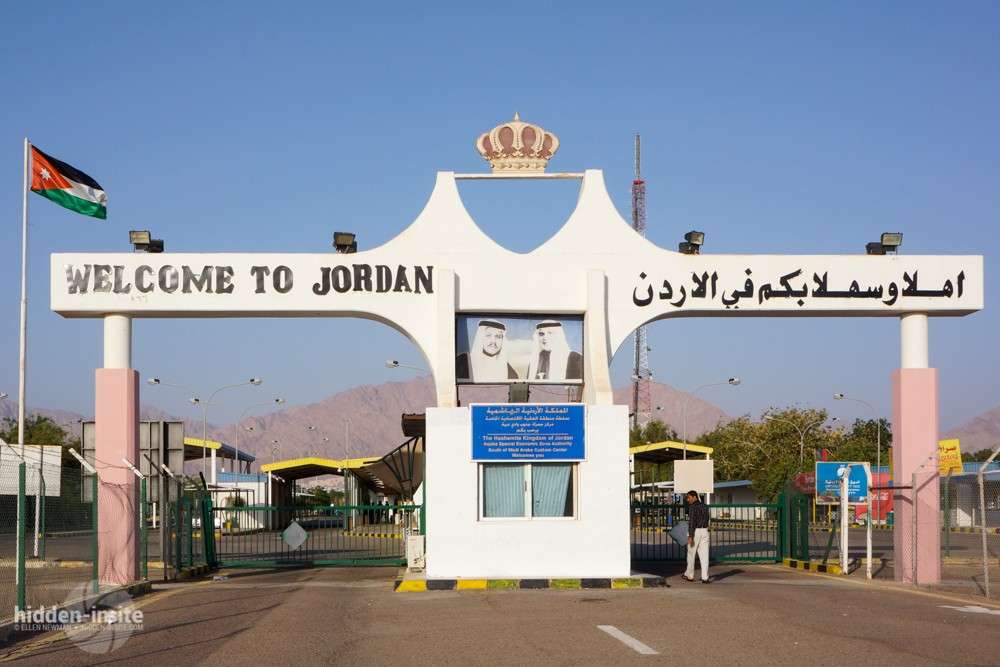 Once the border formalities were taken care of and our passports stamped, we settled into a large comfortable tour bus for the two-hour ride to Petra. Ali took charge immediately. “We’re an eco-tribe,” he said, “and we need to stick together.” He proceeded to engage the entire busload in conversation, mentioning everyone’s name in turn so he would know who we were once we were on the trail in Petra. Impressive.

First, a little background. Petra was the capital city of the Nabataeans, an ancient people who controlled trade routes through northern Arabia and the Negev to the then thriving port of Gaza. Goods from China, India, Egypt, Syria, Greece and Rome passed through their cities. Among the transported items, luxuries like frankincense and myrrh (the gifts brought to celebrate the birth of Jesus) from Arabia, spices from India and sumptuous silks from the Far East. Globalization is not a new idea.

The Nabataean secret for success: hydro-engineering

The secret of the Nabataeans — and of Petra — was their control of water, a precious commodity in the desert. As Ali led our eco-tribe along the trail from the Petra visitor center, he explained that the Nabataeans were experts at “water harvesting,” collecting rainy season water in dams and cisterns and saving it for the dry months. They carved channels out of the rock and built aqueducts to collect water, which, according to some accounts, they sold. Petra was an oasis. 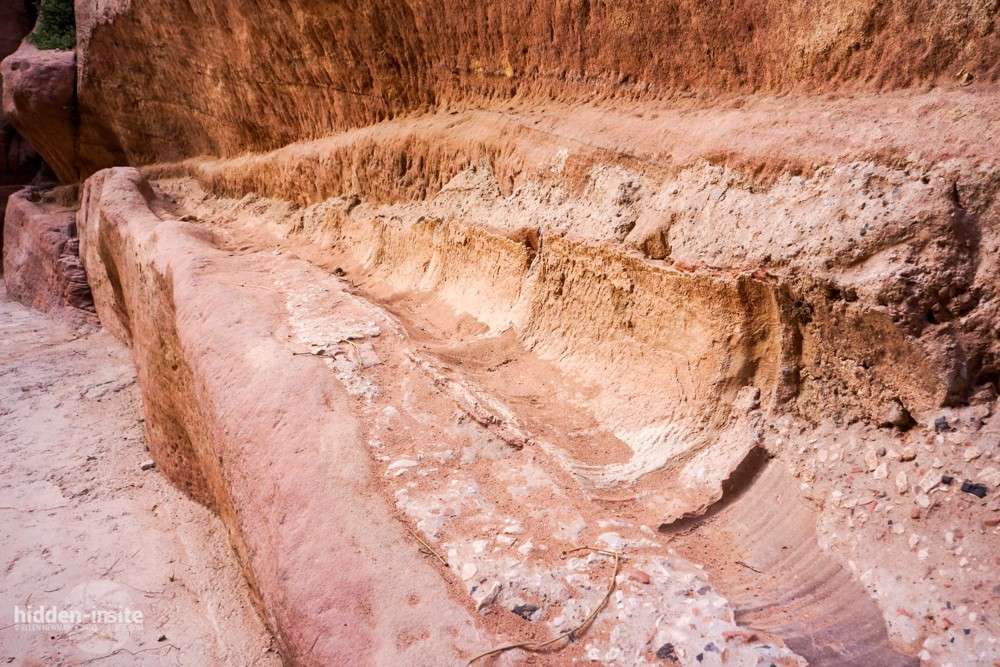 Suddenly the path narrowed. Ali led us into the Siq, a slot canyon more than 1200 meters long created by an ancient earthquake. It was so narrow we could barely see the sky. That slender ravine essentially hid Petra, giving the Nabataeans a natural defensive barrier that kept their capital out of view and safe from harm. 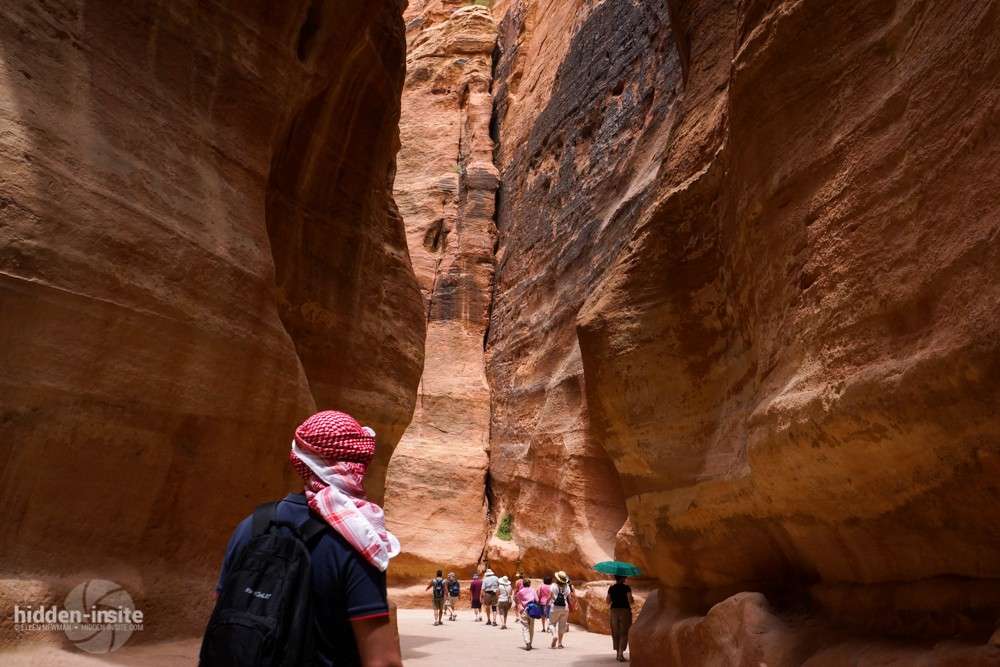 As we walked along the Siq, Ali showed us niches for devotional carvings or objects, some probably of the sun god Dushara. He pointed out remnants of a carved sandstone caravan, alerting weary travelers that they were approaching the holy entrance to Petra and a welcome rest stop. 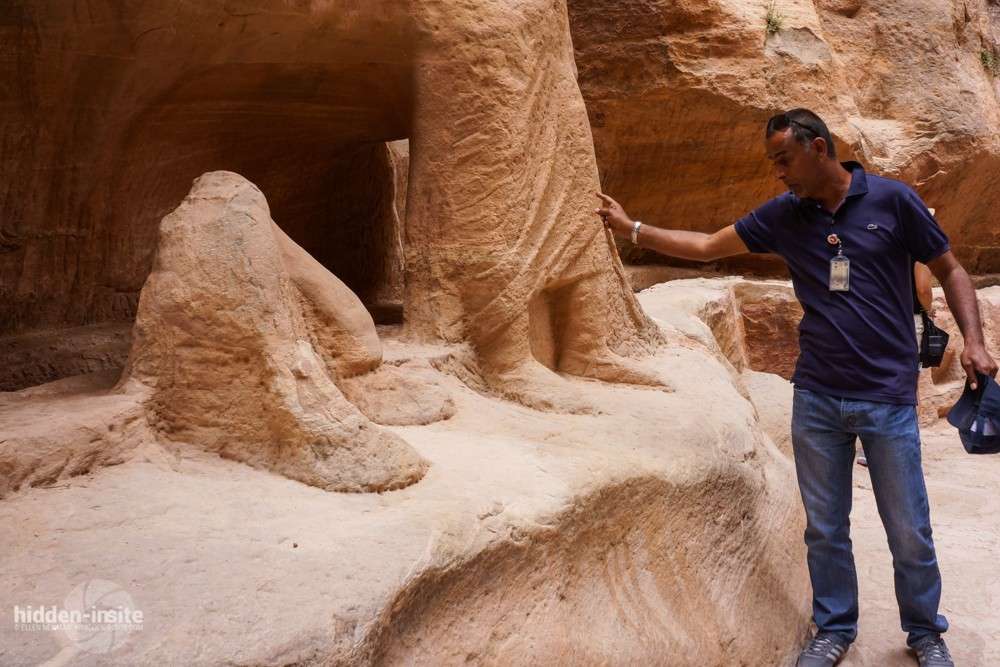 After each stop and nugget of information, Ali kept us moving, urging us on like a camp counselor. “Yallah, Eco-Tribe, let’s go,” he nudged us down the trail. The Treasury and our Indiana Jones moment were waiting. 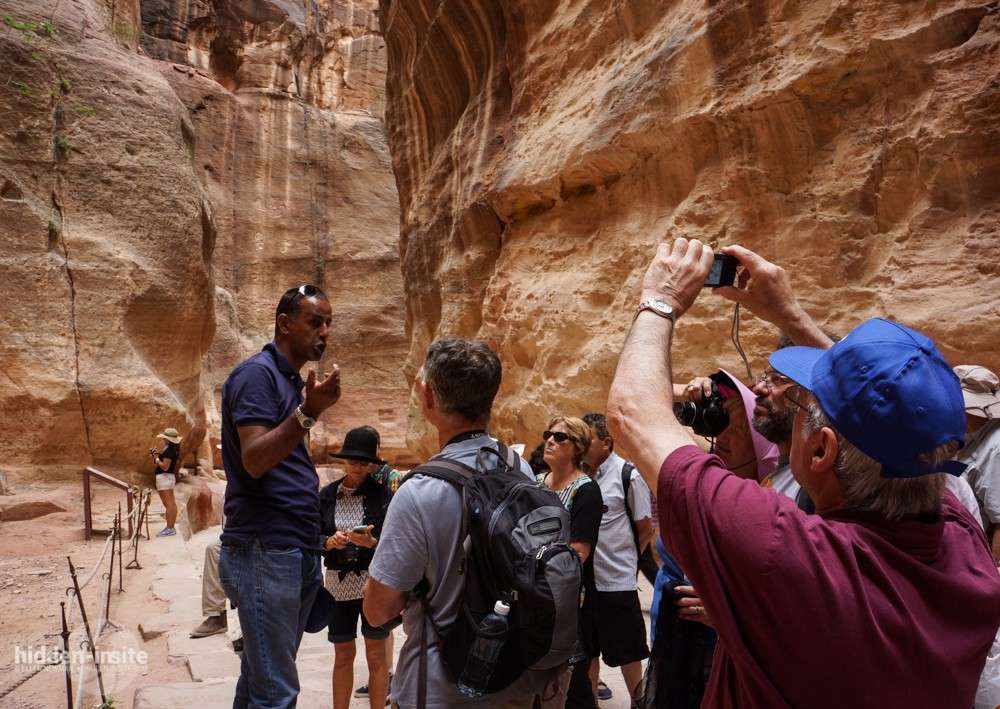 The Siq ends abruptly, opening into a broad plaza in front of the Treasury, which, Ali confessed, had nothing to do with treasure. “It’s just a local name,” he said. “The local Bedouins believed that the ancient Egyptians, the Pharaohs, cached their riches in the urn at the top of the Treasury.” You can still see pockmarks from the bullets they shot up there trying to break open the rocks and dislodge the fantasized treasure. “The Treasury is just a funeral tomb, a royal funeral tomb made for one of the most famous kings of the Nabataeans, Aretas IV, who ruled from 9 BCE until 40 CE,” Ali recounted. To put Nabataean history into perspective, Aretas IV was a contemporary of Jesus and Herod. 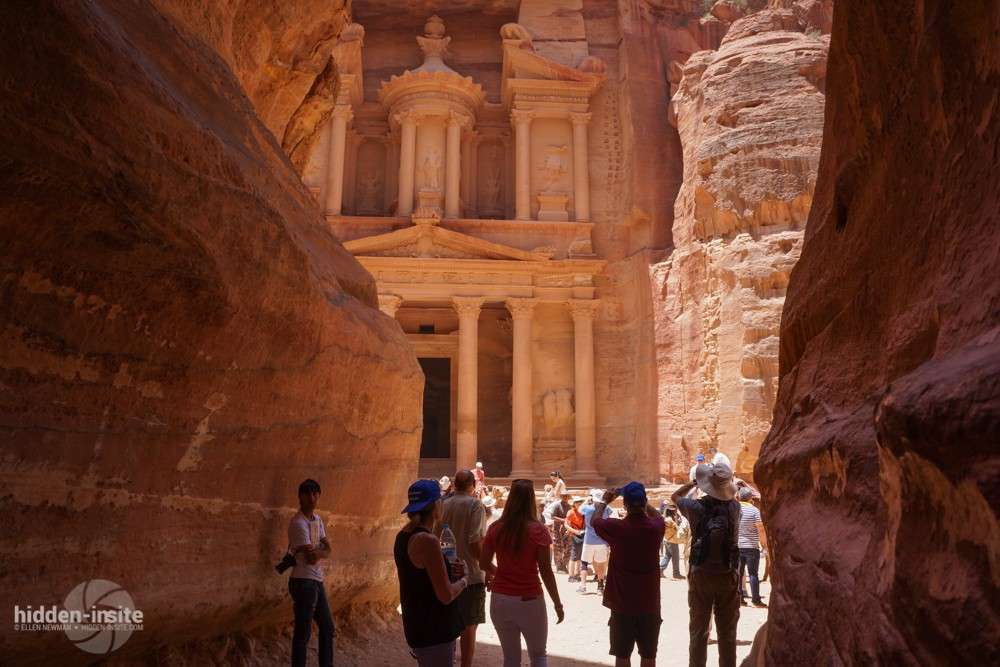 In fact, many of the iconic artifacts we see today in Petra are the remains of a giant sandstone cemetery – tombs, crypts and gathering places for funeral celebrations – not palaces, civic buildings or dwellings. Ali told us that the Nabataeans believed in life after death. They assumed that souls lived on, but did not follow the Egyptian custom of burying material treasures for the dead to use in the afterlife.

Ali pointed out that the Treasury is a “mixture of different civilizations and styles,” Greek, Egyptian and Roman. Other remains display Assyrian influences. Ideas as well as goods traveled along these ancient routes. 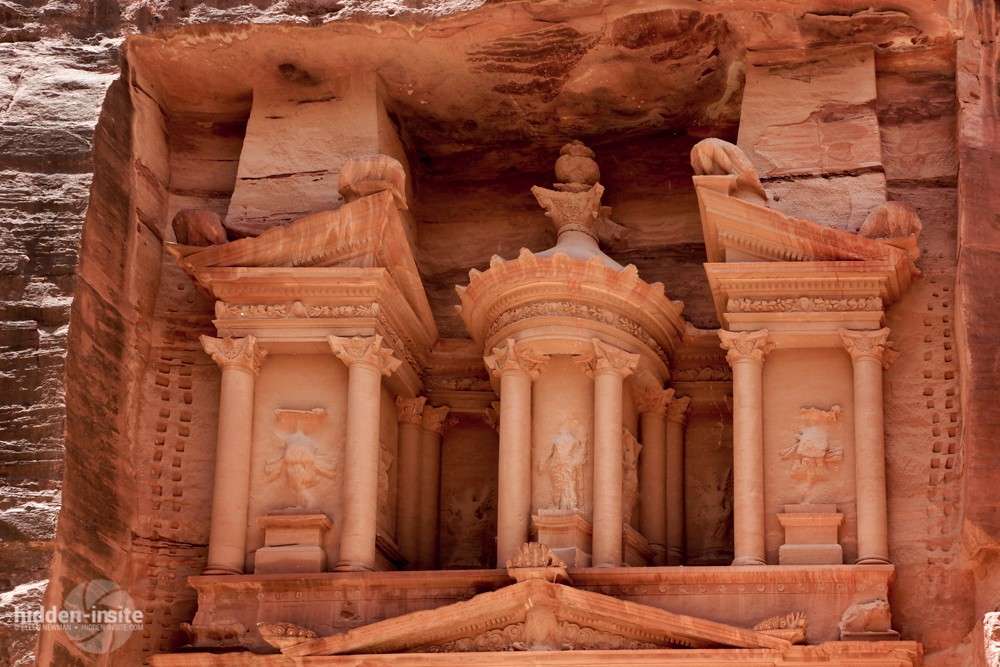 The big surprise was Ali’s description of how the artisans carved the facades. He explained that it was from the top down, not the bottom up. Who knew? How can you even conceptualize a piece of art that grows down from the top? And how did they get to the rock face to do the carving? “It is believed that they built stairs going up to the top,” explained Ali. If you look closely to the sides of the Treasury, you can still see footholds left in the stone. 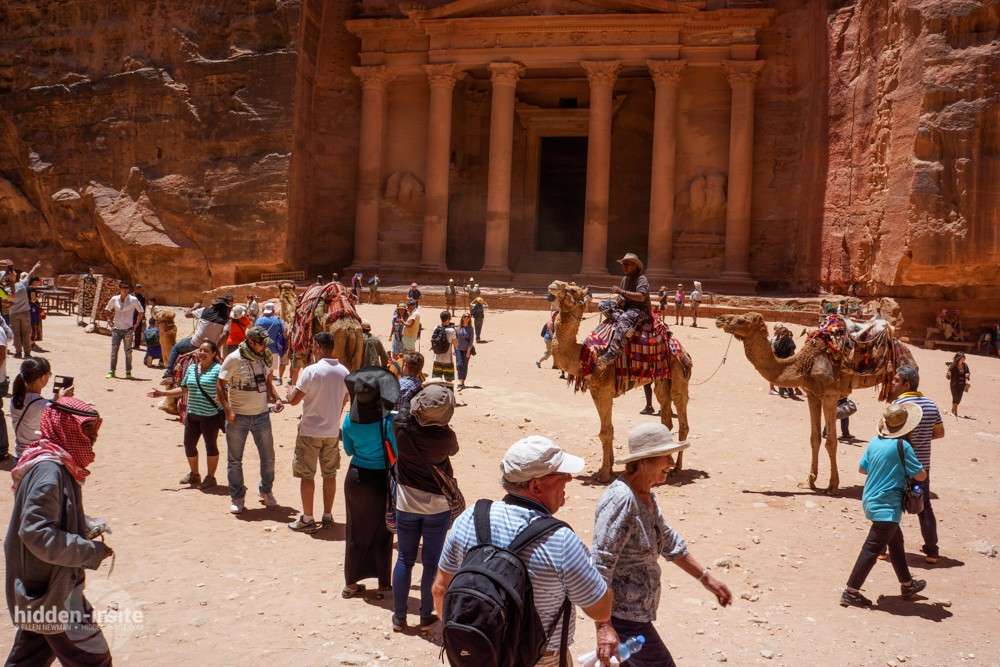 Today the plaza in front of the Treasury is a meeting point for travelers from all over the world and the Jordanian Bedouins who live in the nearby hills and work in the shops, stalls and restaurants that dot the next part of the road through Petra. It’s full of camel wranglers hawking rides, jewelry stands, gossiping Jordanian police and tourists. 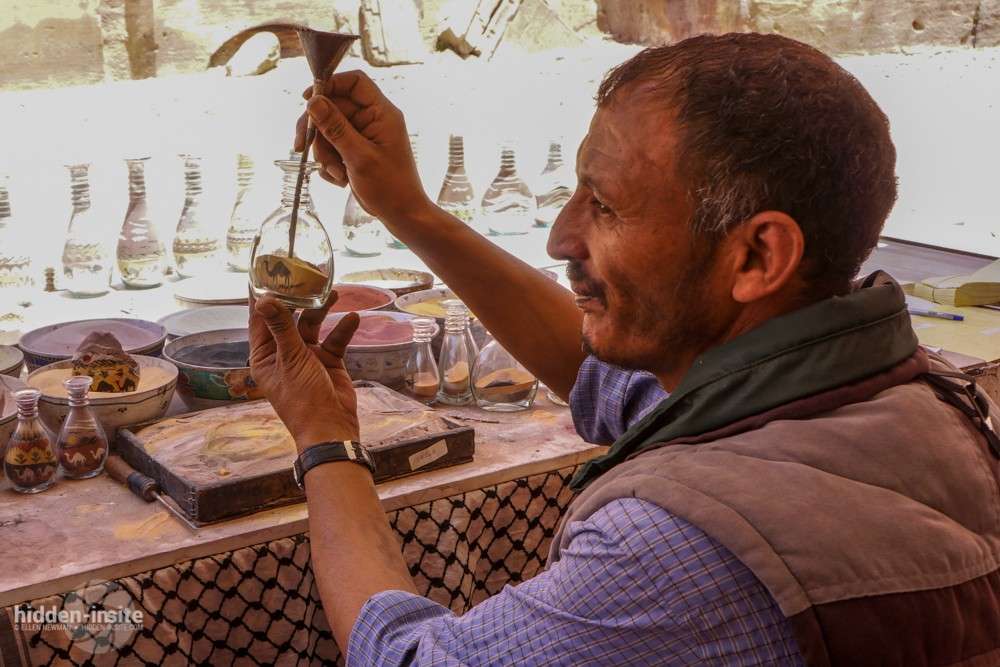 The lower road and beyond

As we continued past the canyon into more open areas, Ali explained that at its pinnacle, the 22-square-miles of Petra were home to between 25- and 30-thousand people. Piles of rubble are the only evidence left of their homes because over the centuries earthquakes destroyed the freestanding residences and the water system that supported the city during the heyday of the Silk Road. 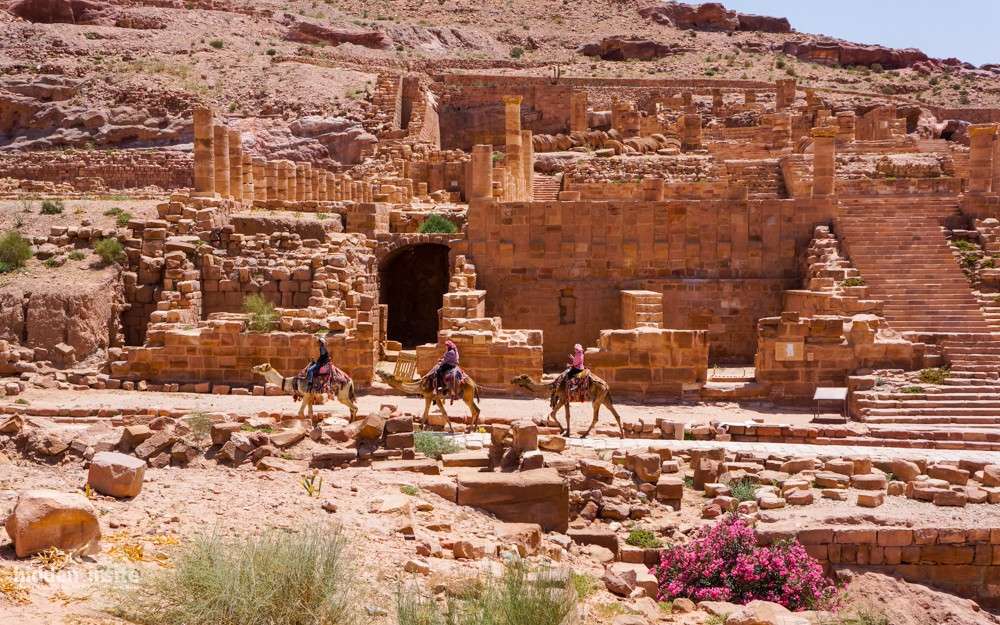 We walked by a large theater carved in stone, and Ali described a smaller theater space used for meetings. He showed us the stone steps leading up the mountain to the High Place of Sacrifice where the Nabataeans conducted their annual rituals. Further on along the lower road we could hike to the building named the “Monastery,” explore a colonnade from the Roman period and enjoy mosaic inlays on the floor of a former Byzantine chapel. 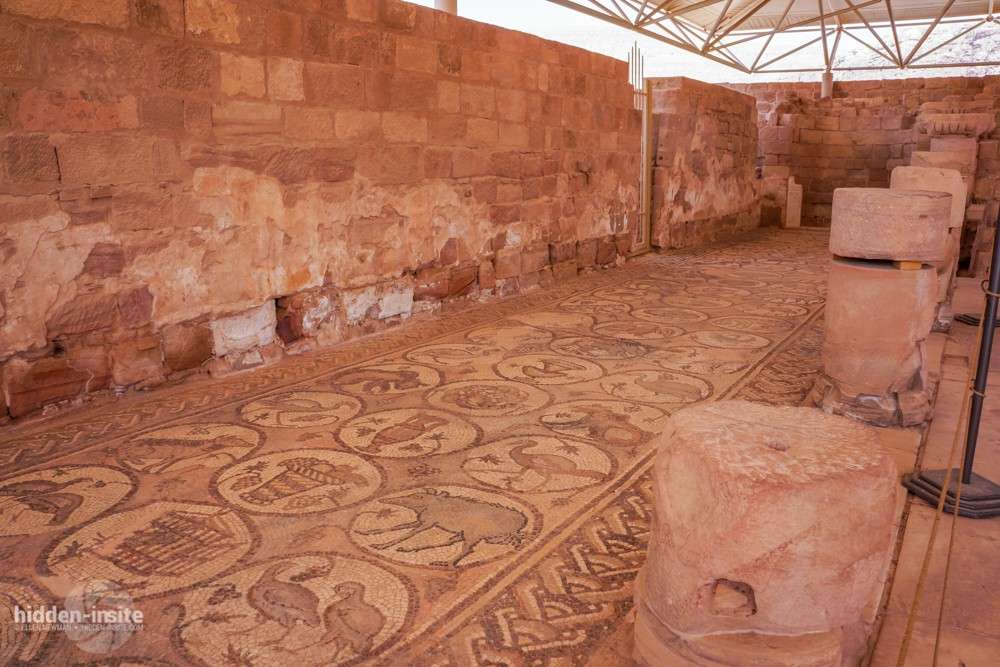 Fatigue — definitely not Indiana Jones’ problem — set in while we looked at the mosaic floor, up a bit from the main path. The two-plus mile walk back to the visitors center was all uphill, past the Treasury and through the Siq, not entirely appealing at the end of a long day. “Let’s take a camel back up,” David suggested. Why not? Neither or us had ever ridden a camel. And we had never bargained with a camel wrangler either. The result was that we paid too much for a lurching, bumpy ride. The camels did take us across the valley to a fabulous view spot and another series of tombs we might have missed, but I was barely hanging on with one hand while trying to take pictures with the other hand. It just wasn’t working, despite the wranglers’ insistence, “everything is OK, lady.” 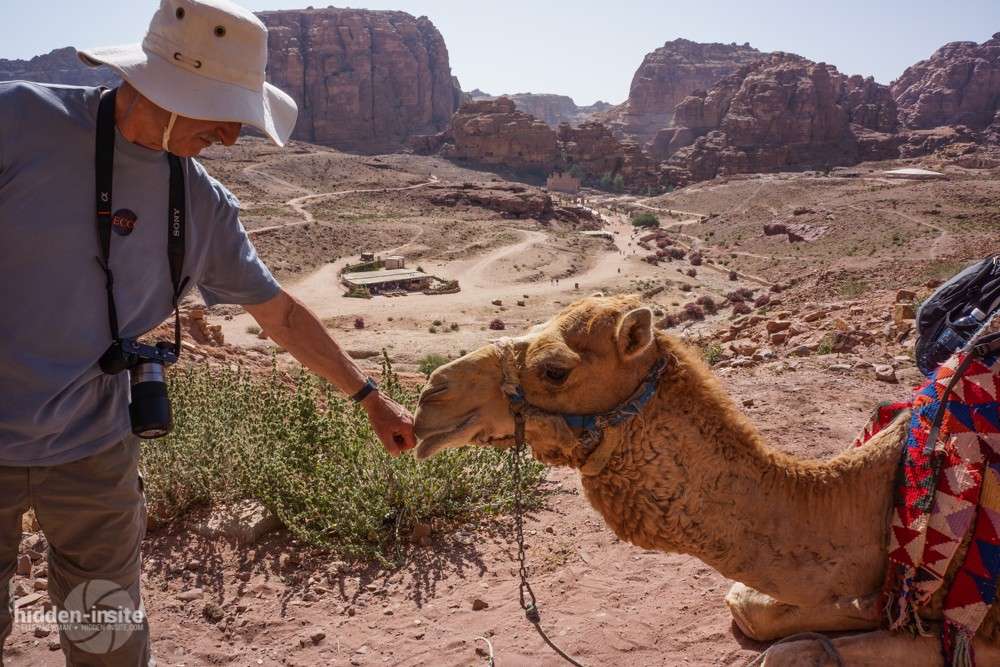 After an hour of exploring on camelback, we dismounted and and started back on foot. By then most of the day-trippers had left to meet their buses. Since we were staying at Wadi Musa, the adjacent town, we could stay until sunset. Without the crowds, we walked back up the hill slowly, taking as many pictures as we wanted in the golden light. On the way back we shared the trail with Bedouins heading home for the evening, singing softly to themselves. In the dimming of the day, Petra became truly magical. 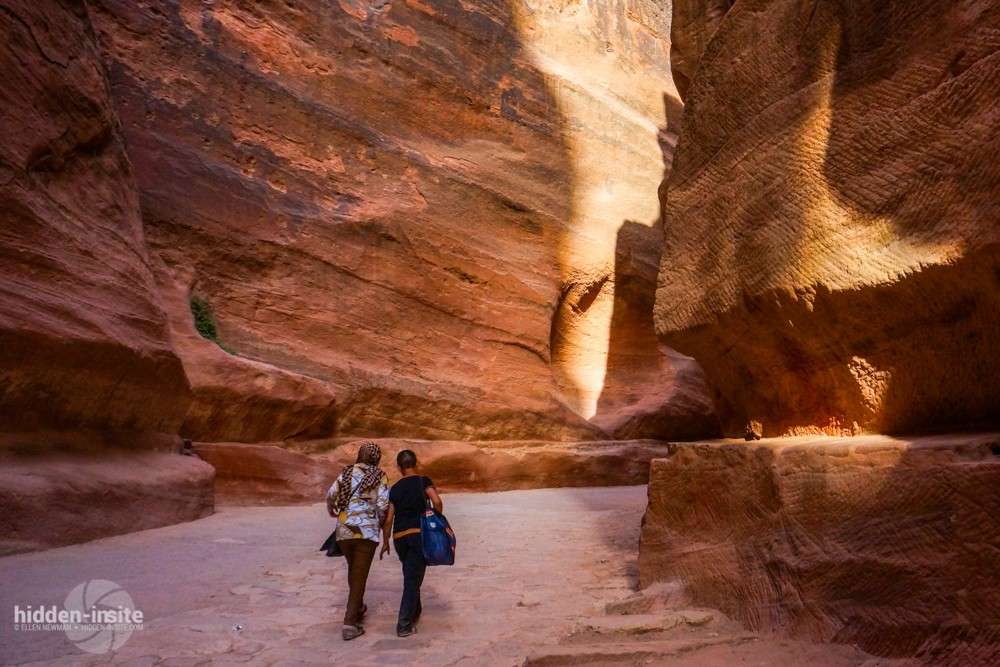 Our best advice for visiting Petra is to stay at least one night, maybe two. We toured Petra on the first day and stayed overnight at the Movenpick Hotel, right across the street from the entrance to the park. We toured Wadi Rum the next day with another terrific guide from Desert Eco before heading back to Israel. One-day visitors need to meet their buses by mid-afternoon, meaning that most of their time at the UNESCO World Heritage Site is spent in the heat of the day when Petra is at its most crowded. They also have no opportunity to explore much beyond the Treasury, and certainly can’t hike to the Monastery or the High Place of Sacrifice.

Tours can be arranged either from Amman, Jordan, or Eilat, Israel. We were delighted with Ali and the entire gang at Desert Eco Tours. 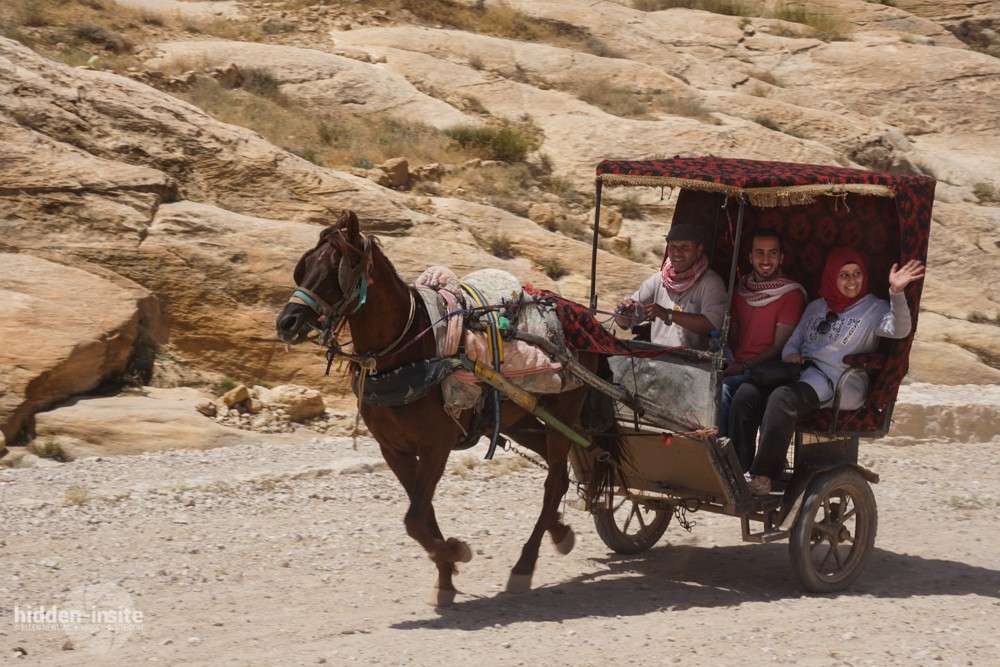