Mourning on the Ganges

On the Ganges in Varanasi, India 13 Comments
7

After a short, fitful night’s sleep we tiptoed through the ornate halls of Varanasi’s Brijrama Palace hotel. It was just before dawn and we were heading to the lobby to meet Pankaj Singh, our tour guide.

“I am so sorry to hear about your mother,” he said, his warm brown eyes reaching out to David as he gathered one of David’s hands between his own, offering gentle comfort. Word had clearly traveled quickly.

We got the call we hoped wouldn’t come at 9:30 the evening before. We had just arrived in Varanasi, the second stop on what was supposed to be a seven-week trip to India. Our first call was to our travel agent in San Francisco, a dear friend with a terrific team. “The office is working on your flights, “ Pankaj told us. “They’ll phone when it’s arranged. In the meantime, as long as you feel up to it, let’s go see Varanasi. The boat is waiting.” 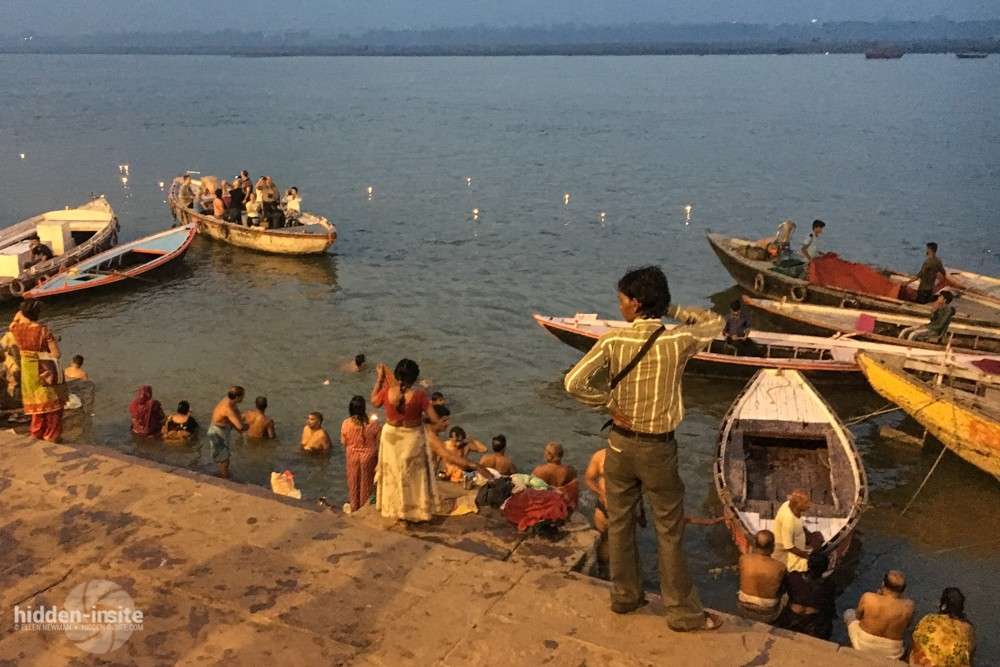 Morning on the Ganges

With that, we stepped out onto the landing of Darabhanga Ghat. The banks on the far side of the river were just emerging in the thin 5 a.m. light. But on our side, the western bank of India’s holy Ganges, electric lights bathed the steps and rag-tag flotilla with an eerie sulfur-yellow glow.

We paused for a moment to absorb the scene. Like the lingering twilight perched on the brink of dawn, David and I were in a liminal state, knowing that his mother, Miriam, had died not quite twelve hours before, but not yet fully grasping our new reality. We were in between, partly tourists, partly mourners, our bodies in Varanasi, our minds leaping ahead to the long flight home and our hearts firmly in California.

Pankaj took my hand to steady me down the worn steps to the waiting rowboat. More than a dozen bathers hugged the shore, taking a morning dip at the base of the ghat, the stairs leading to the bank of the river. Just as we were about to climb onto the boat, a young girl with a basket of flowers, candles and what looked like tiny tin pie plates shyly approached. “David, you should buy some for the memory of your mother,” Pankah suggested. The girl quickly assembled five of the diya offerings for us to float on the Ganges later in the morning. 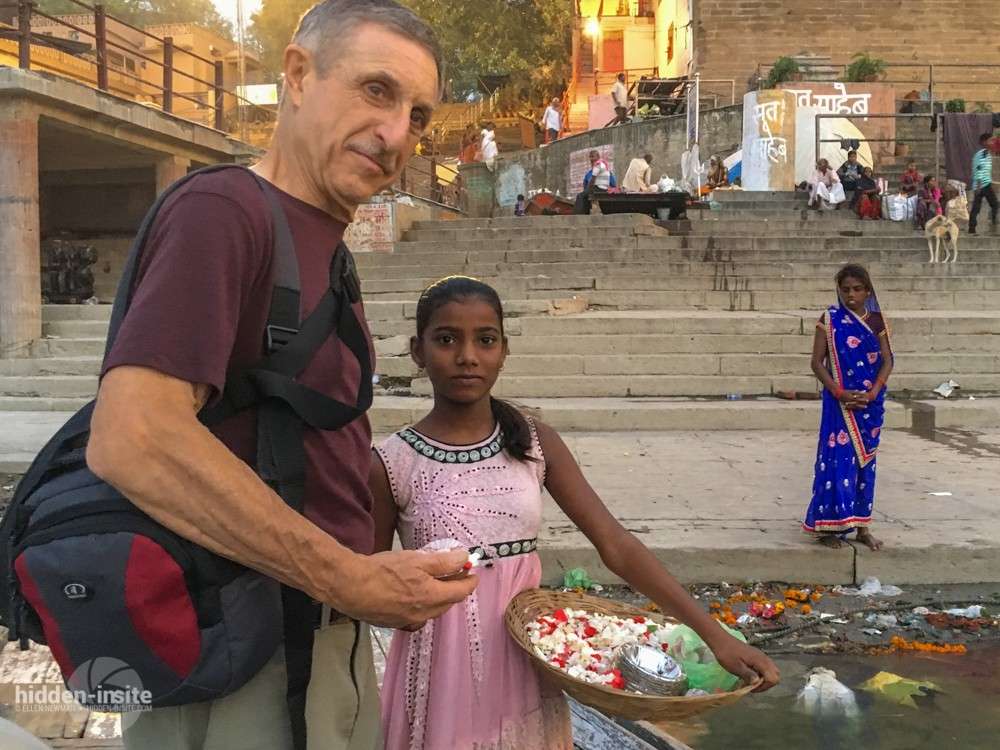 Our destination was Manikarnika Ghat, Varanasi’s traditional funeral and cremation site. I first heard about it from my friend Audrey, who made visiting Varanasi sound fascinating and exotic. One of Hindu’s holiest sites, Varanasi is one of the oldest cities in the world. Archeological evidence goes back nearly 3,000 years. Mark Twain, who visited Varanasi in the 1890s when the city was called Benares, wrote in Following the Equator, “Benaras is older than history, older than tradition, older even than legend and looks twice as old as all of them put together.”

It hasn’t changed much. From the river, the city looks like a hodge-podge of crumbling palaces, ancient temples, steep steps and terraces all oriented toward the broad river. “We call the river Mother Ganges or Ma Ganga,” explained Pankaj. “The Ganges is not just a river. It is holy because it gives us water for agriculture and everything.”

Stretching 1,550 miles from the pristine glaciers of the Himalayas to the Bay of Bengal at Calcutta, the Ganges is believed by devout Hindus to have sacred properties. People come to Varanasi to pray at the riverside, to purify themselves in the holy waters and to die. They come as pilgrims looking for salvation, for the liberation of their souls from the cycle of birth and death.

But people also come to the river to bathe, to swim, to wash their clothes, to socialize, and to take selfies proving they were here. The sacred and the mundane are thoroughly intertwined along the banks of the Ganges. 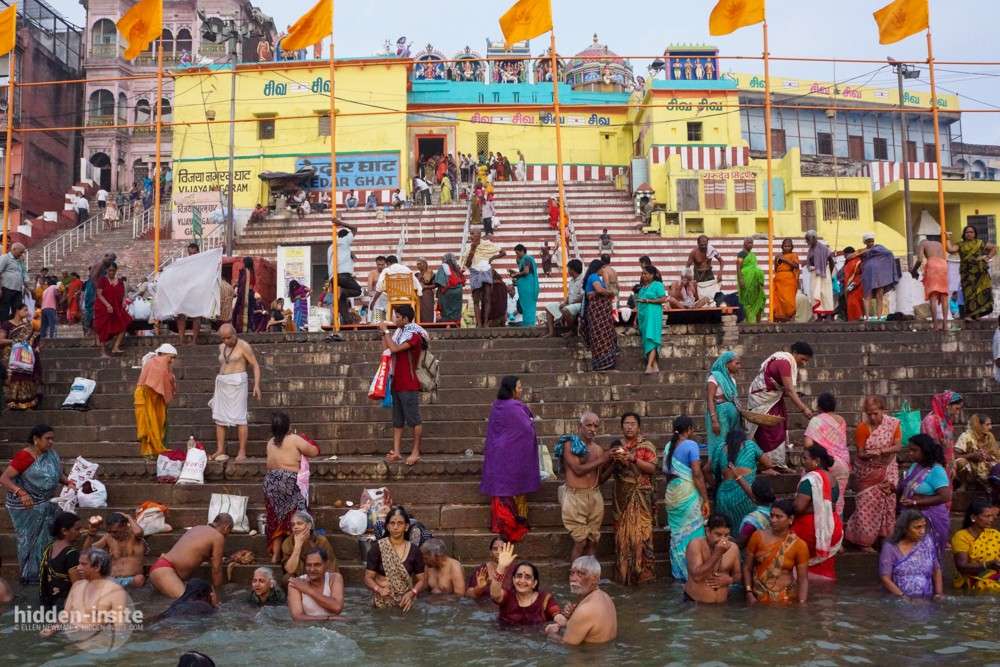 On our way to Manikarnika Ghat the boatman rowed past sadhus (holy men) stationed under umbrellas along the shore, steps full of sari-clad bathers, laundry drying on the ghats, boatloads of pilgrims dressed in white and tourists snapping the scene.

Manikarnika Ghat and the rituals of death

According to legend, at the dawn of time Lord Shiva and Parvati, the Hindu goddess of fertility, love and devotion, lived in Varanasi. The myth claims that Shiva lost a jeweled earring (manikarnika) at a well Vishnu dug for the couple. The site of the well was chosen as the sacred space for cremations and funerals. “Shiva is the god of destruction, transformation and regeneration,” said Pankaj. “People come to Varanasi because it is the place for the liberation of the soul, for salvation.” Hindus call the separation of the soul from the body moksha, and the idea is the central inspiration behind Hindu funeral rituals. Dying and having a funeral on the banks of the sacred Ganges is believed to release the soul from the cycle of death and reincarnation. 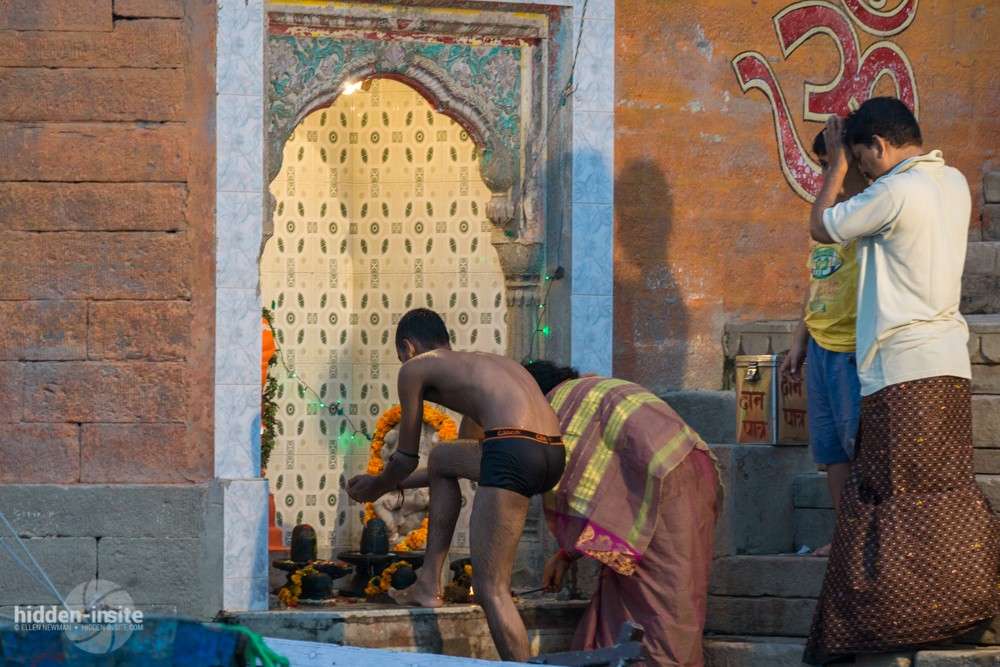 Our boat rounded a corner and hovered further offshore than we did in other spots along the river. We could see the fires burning, as they do 24 hours a day to accommodate the 200-300 daily cremations and funerals. I put down my camera, both out of respect for the grieving families and in recognition that we could be one of those families.

The body, which is wrapped in white if the deceased is a man or a widow or in red for a married woman whose husband is still alive, is carried on a bamboo stretcher or ladder to the cremation site. The body is dipped in water from the river for a final purification, then placed on the stairs. In the meantime, the chief mourner has purified himself in the Ganges and has shaved all over. Dressed all in white, he goes to get the eternal flame. Other family members have bought wood, a luxury for many in India, for the fire. 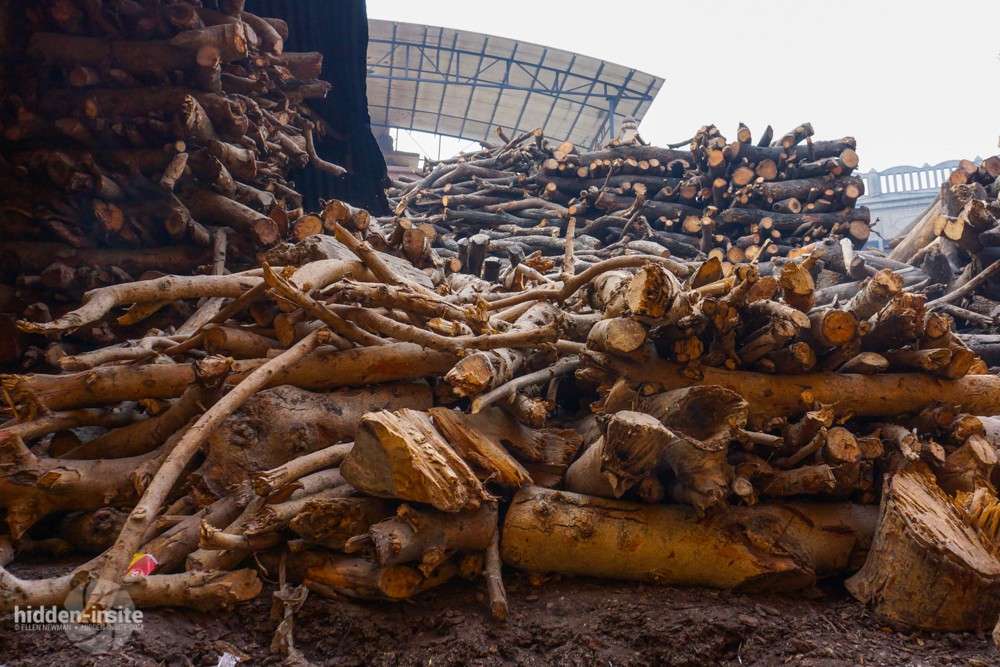 The chief mourner walks around the body five times to symbolize that all the fundamental elements of the universe – water, air, earth, space or ether and fire – will return to their original sources. “It’s our version of dust to dust,” Pankaj added.

Only then does the chief mourner light the fire, which will burn for two to three hours. As westerners who let professionals take care of the aspects of a funeral that involve the body, it was interesting to hear how deeply involved religious Hindus are with the bodies of their loved ones. But there was more. Pankaj continued. “When the body is half burned, the chief mourner takes a piece of the bamboo and breaks the skull to release the soul to heaven.” Oh, I thought, trying to imagine that step of the ritual as a sacrament, that’s really heavy. So final. So real. Later I read that this practice, kapal kriya, helps insure that the skull burns. Like many customs in many cultures, it serves multiple needs, psychological and physical.

After the cremation is complete, the chief mourner takes the ashes to the Ganges and everyone in the family goes to the next ghat for showers before they go home to begin the traditional 13-day mourning period. On the thirteenth day there is a feast. “After the rituals are complete,” Pankaj explained, “the soul settles down into peace.” 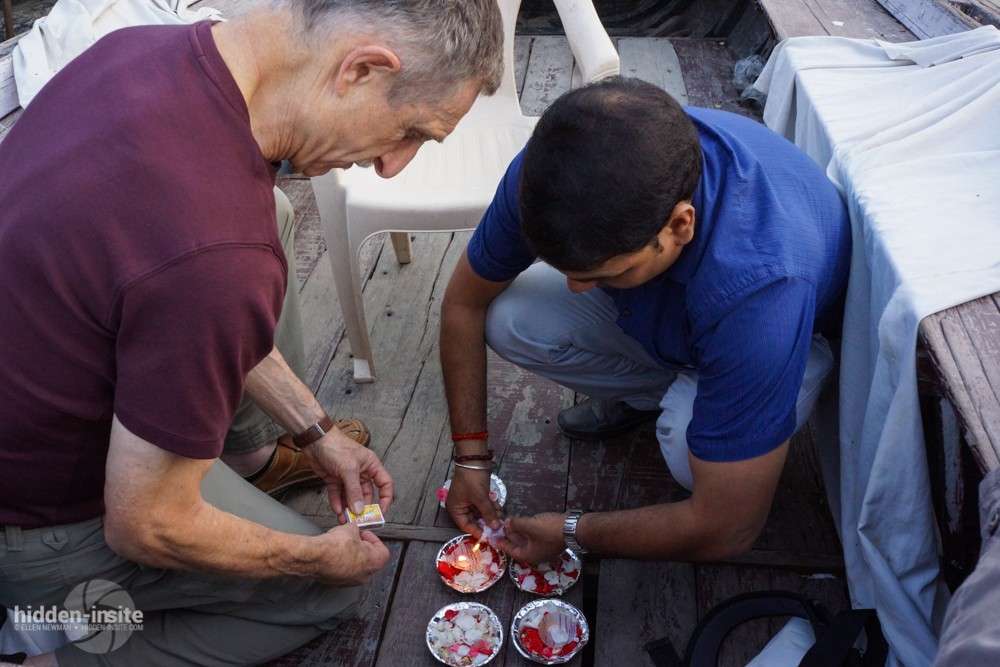 With that, he invited David to light the candles in the diya offerings. “It’s for your mother’s memory, so her soul will be at peace,” he said kindly. We were so engrossed in his descriptions of what we were observing that we almost forgot that we were mourners too, and that we would be leaving later that afternoon to go home to a funeral in California.

We watched the offerings drift away in the current of the river that has absorbed the tears of countless mourners over millennia. The loss of a life that is irreplaceable to each family is also universal. We came to Varanasi as tourists, but left, like so many others, as mourners, flying home in time to say Kaddish for Miriam on a golden California hillside. As Pankaj asked us later on What’s App, yes, we did all the rituals.

May Miriam’s memory be for blessing.

First, thanks to Pankaj Singh, who gave us the gift of meeting us where we were and welcoming us to experience our loss in his home on the banks of the Ganges.

And thanks to Sandra Lipkowitz of We Make Travel Easy, our terrific travel agent, who indeed made it easy for us to get home expeditiously and comfortably.

Varanasi is a visual feast. Even with just one day, we were able to see so much. Here’s a small sample of scenes from Varanasi.