A Valentine to Los Angeles

It turned out to be the best gift ever. People who give you a gift that good must know you pretty well and love you a lot, so this is a valentine to my niece Fredi and her husband, Paul, who know how much David and I enjoy Los Angeles. I know it’s heresy for a San Franciscan to say it out loud, but I love LA, my childhood home. Sure, there’s lots of traffic, but there’s also lots of energy packed between the mountains and the sea.

Fredi pushed us to commit to a time for this special anniversary gift. “It’s not a thing. It’s something you have to do here,” she said, meaning Los Angeles. We picked the morning of December 24 as the best time during our annual Christmas visit. She kept the gift a secret until the night before. A couples’ massage? That’s all I could think of. Clearly a lack of imagination on my part.

The mystery gift turned out to be an aerial sightseeing tour of Los Angeles in a Piper Cherokee. It was a four-seater, with just enough room for David, the pilot and me. It was the smallest plane I’ve ever flown in. 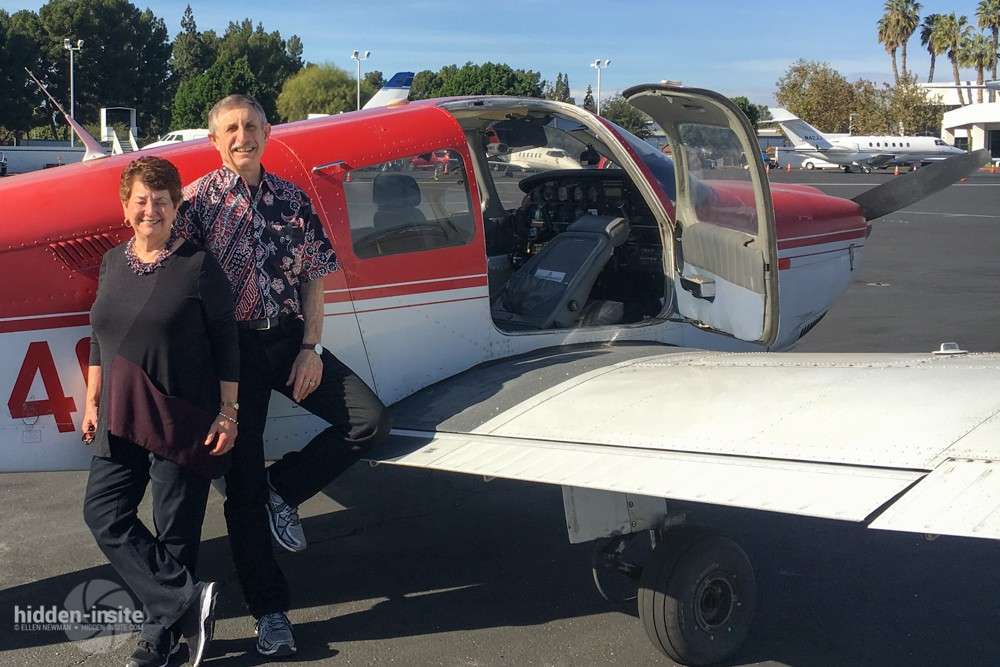 The day was balmy and clear, Los Angeles at its best. The backs of my arms tingled with excitement as we drove to the Van Nuys airport in the San Fernando Valley, one of the busiest general aviation airports in the country. I’d never been there before. It’s where Hollywood celebrities, media moguls and corporate honchos hop on and off private jets as they flit in and out of Los Angeles.

We walked into the spacious lobby. No security check. Snacks and clean rest rooms. Suddenly a dapper man in a windbreaker and striped tie introduced himself. Pilot John Levy gave us a brief safety talk, told us it was OK to take photos anywhere except in the lobby (in case any celebrities were hanging out), and escorted us out to a little—and I do mean little—red and white plane. We had to climb onto the wing to get inside. David took the back seat and I rode shotgun with John. 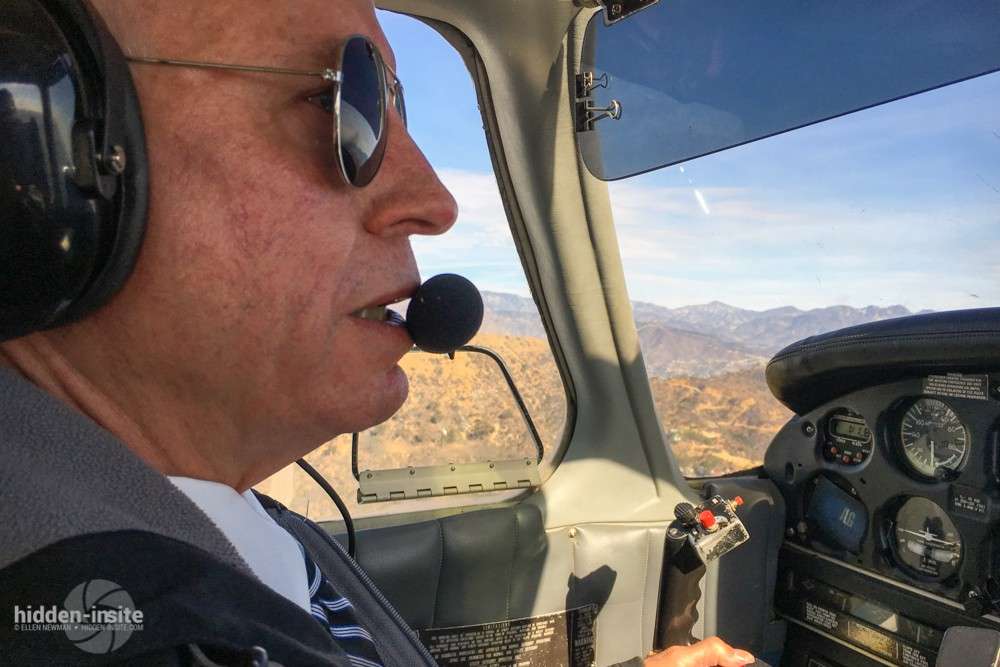 But first I noticed that the windows were dirty. John gave me a rag to clean off the side windows, but warned me away from the front, anywhere near the propeller. Yes, it was a one-engine prop plane. He gave us each headsets to block the noise, then excused himself to concentrate on instructions from the tower.

The propeller started to spin. Its hum reminded me of lazy weekend mornings as a child, lying in bed listening to small planes purr over West Hollywood. I always wanted to go up in one of those planes, maybe even learn to fly one. I was more than ready to take off on our tour.

Up, up and away

The cool thing about flying in a small plane is the scale. You fly above the scene, but not nearly as high as you do in a commercial jet. The oh-mys and look-at-thats just kept coming as we gushed over favorite sights. 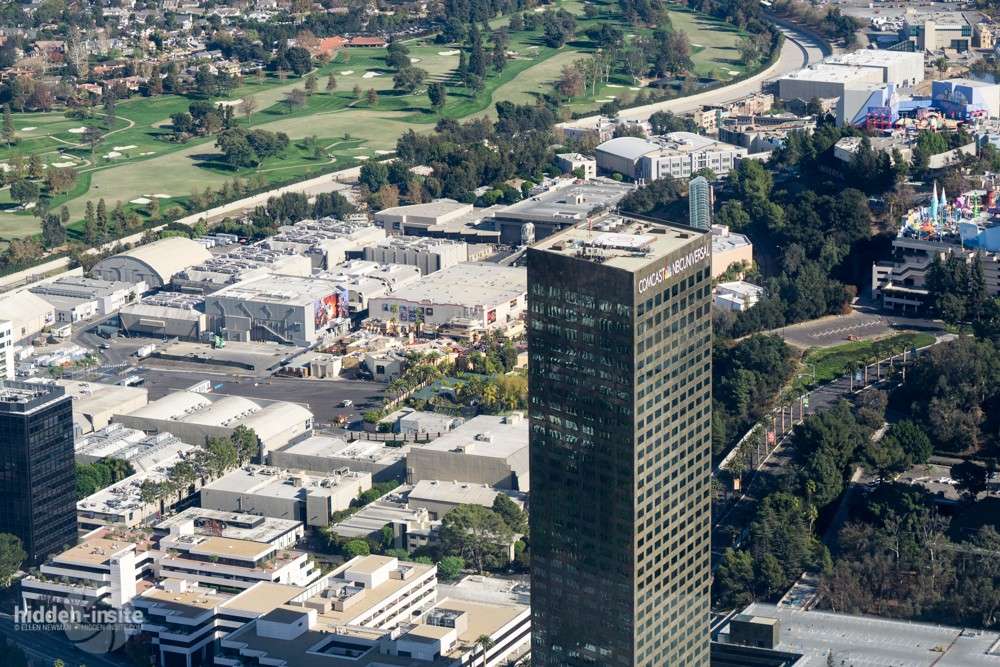 The plane paralleled highway 101, heading east toward Universal Studios. That’s the dream factory where my dad worked. As chief of the trailer department, he produced coming attractions for movies like “Spartacus,” “The Birds,” “Operation Petticoat” and “Sweet Charity.” He even directed the master himself, Alfred Hitchcock, in a trailer for “Frenzy.” Some of my dad’s favorite words were COLOSSAL and COMING SOON.

As a little girl, visiting my dad at work was a huge treat. We mostly met him for lunch when we had out-of-town company, relatives from New York. My cousins were enthralled when we went for lunch at the commissary. They lived to catch a glimpse of Rock Hudson or Doris Day. I loved touring the back lot where medieval Europe and New York, New York met on a street corner. I knew we couldn’t go into a studio building if a red light was flashing because they were filming. Dad showed us prop rocks we could lift and stopped us from running around the make-believe castle in case parts of it were built to fall apart for a shot. 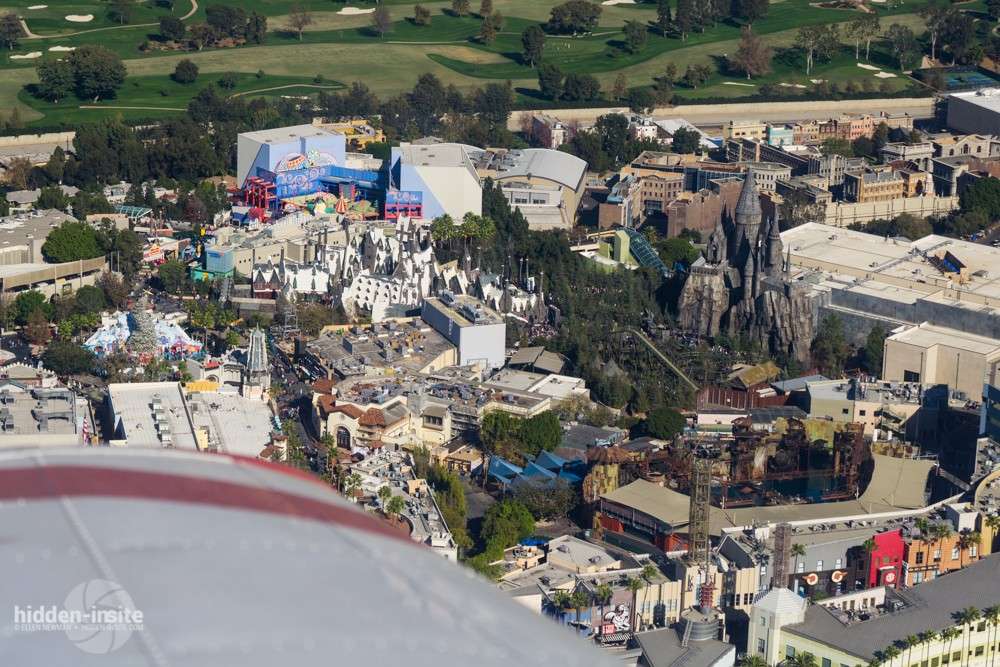 But that was then. Now Comcast NBC Universal sports a tall, black office tower, and the Universal Studios theme park takes over where our casual tours left off. 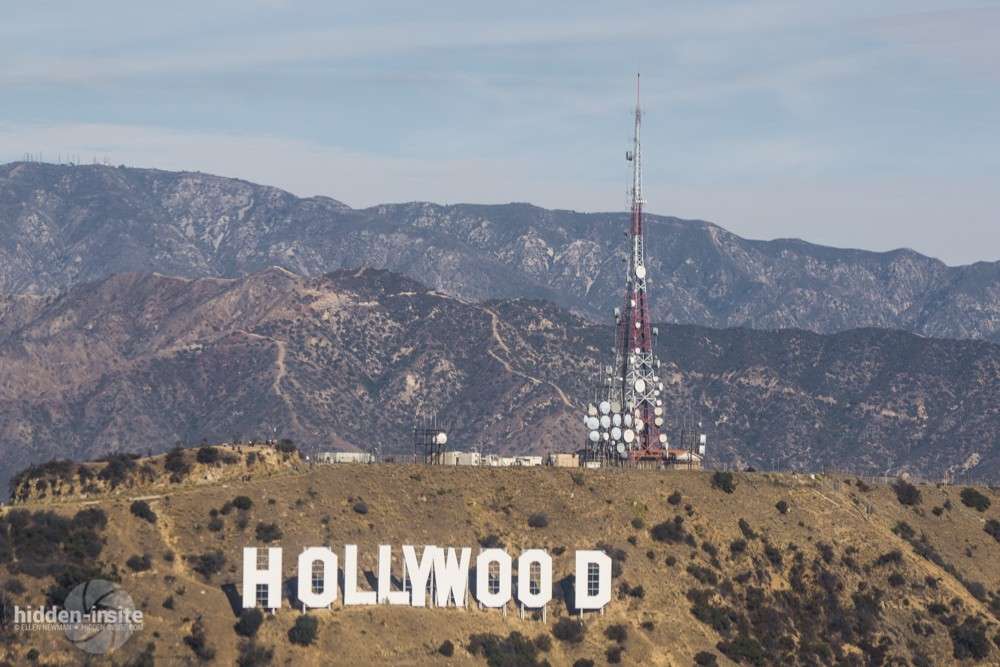 I didn’t have much time to indulge my nostalgia before we turned south through Cahuenga Pass at the eastern end of the Santa Monica Mountains, still following 101 past the Hollywood Bowl into the Los Angeles Basin. A quick left turn to the east brought us face-to-face with the iconic Hollywood sign. Built in 1923 to promote the Hollywoodland real estate development, the sign has become one of the most beloved landmarks in Los Angeles. 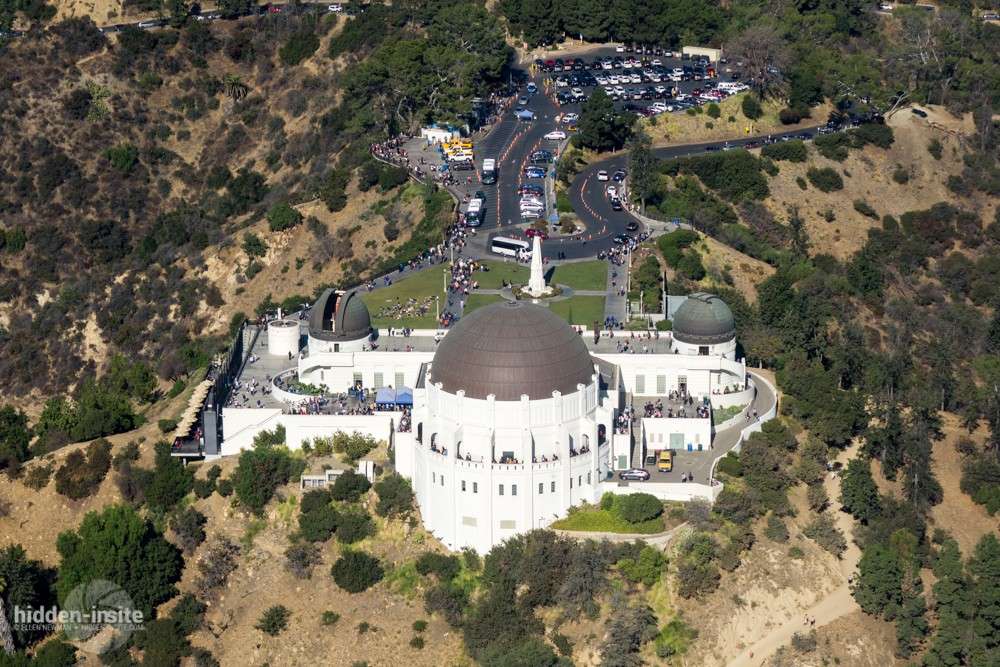 Continuing east, we passed the Griffith Park Observatory, one of my favorite childhood haunts. It was a schlep to drive there, but oh so exciting. I could watch the Foucault pendulum in the rotunda swing for hours, knocking down the little pegs as the earth rotated beneath the suspended ball. The planetarium was the stuff of dreams with its Zeiss star projector taking us on journeys we never thought possible. We flew by the planets—there were nine then—and got to see close-ups of the moon years before Neil Armstrong took his giant leap for mankind.

DTLA: Now there’s a there there

From Griffith Park, John took us for a close-up of downtown Los Angeles. Unlike the Hollywood sign and the observatory, old childhood favorites, downtown LA, now branded DTLA, is largely new. The grungy old downtown has transformed itself into a thriving modern metropolis. There’s a there there now with its strip of high-rise office buildings, the Frank Gehry designed Walt Disney Concert Hall, the fabulous Broad museum created by Diller Scofidio + Renfro, and the surrounding contemporary arts scene. 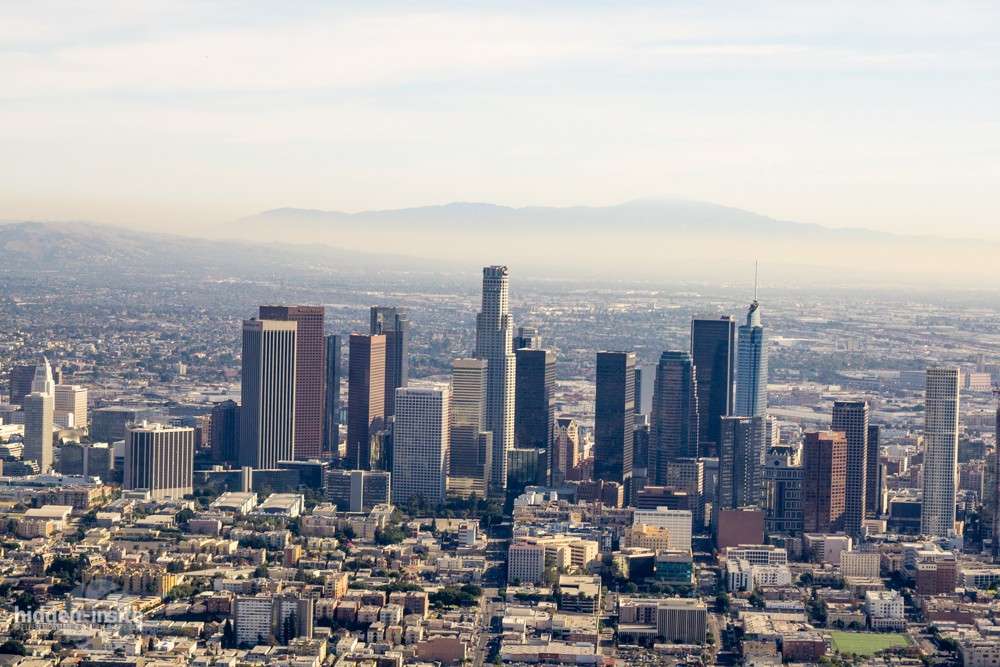 We didn’t go downtown often when I was a child. There were occasional dinners in Chinatown and excursions to Olvera Street, the remnant of the original Spanish outpost where “El Pueblo de Nuestra Señora la Reina de los Ángeles del Río Porciúncula” was born. In those days, City Hall was the tallest building around. It was a big adventure for me to take the Wilshire Boulevard bus to the main library to work on a school project. 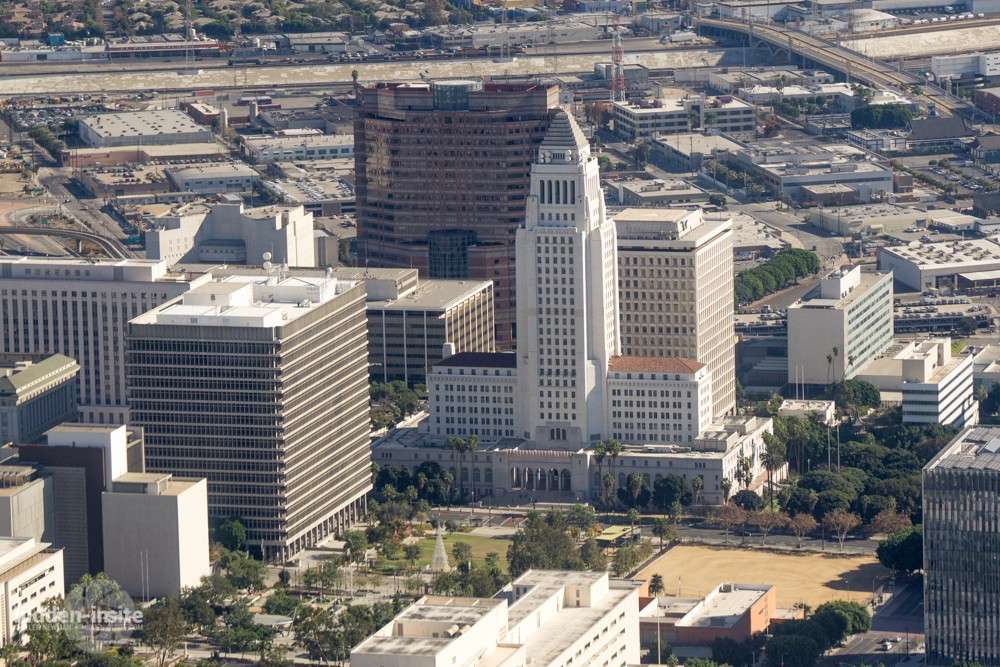 The real change is that you can see downtown at all. I grew up in smoggy LA, with days so thick with pollutants that my chest hurt just going out to recess. Like everyone else we burned garbage in our backyard incinerator, which was legal until LA banned incinerators in 1957. Flying past City Hall, I remembered that Sam Yorty successfully ran for mayor on a wave of indignation because people didn’t want to separate their garbage. Maybe we just needed some spiffy black, green and blue bins to sort our trash. 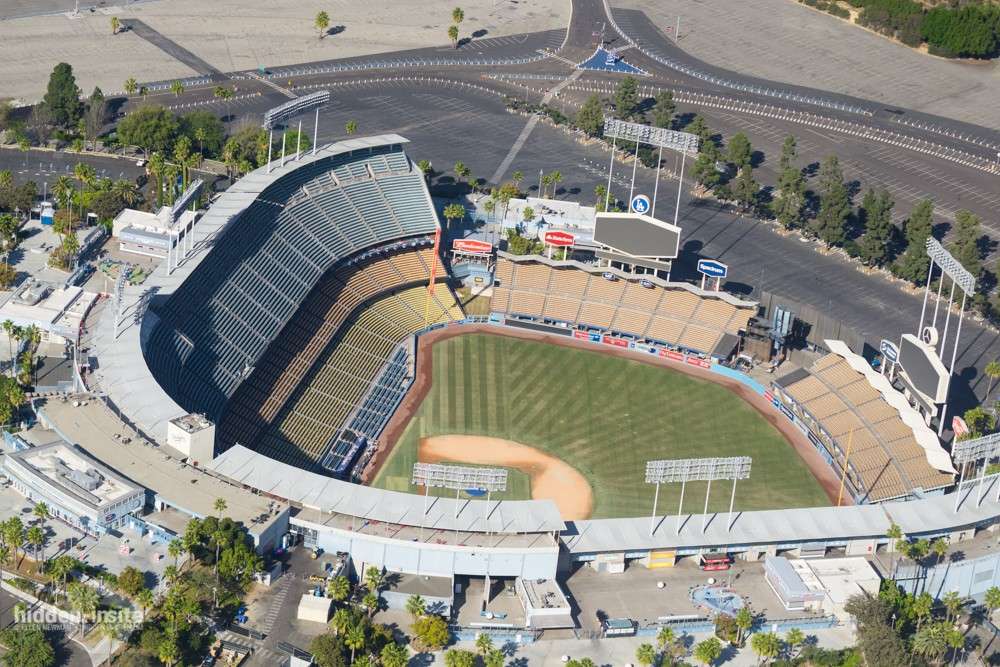 I’m not sure anyone would put Dodger Stadium in Chavez Ravine today, far from public transportation. I spent many fun evenings there in high school and college with my friend Sherry, who had a huge crush on Sandy Koufax. One night, long before smoking was banned in public places, we had the chutzpah to ask two men in the row behind us to put out their cigars. “Really,” they glowered. Little did they know their public puffing days were numbered. Another time, my friend Deborah and I climbed up the hill behind the stadium to get a glimpse of the Beatles. During our flight Cirque du Soleil was camping out in the stadium parking lot. 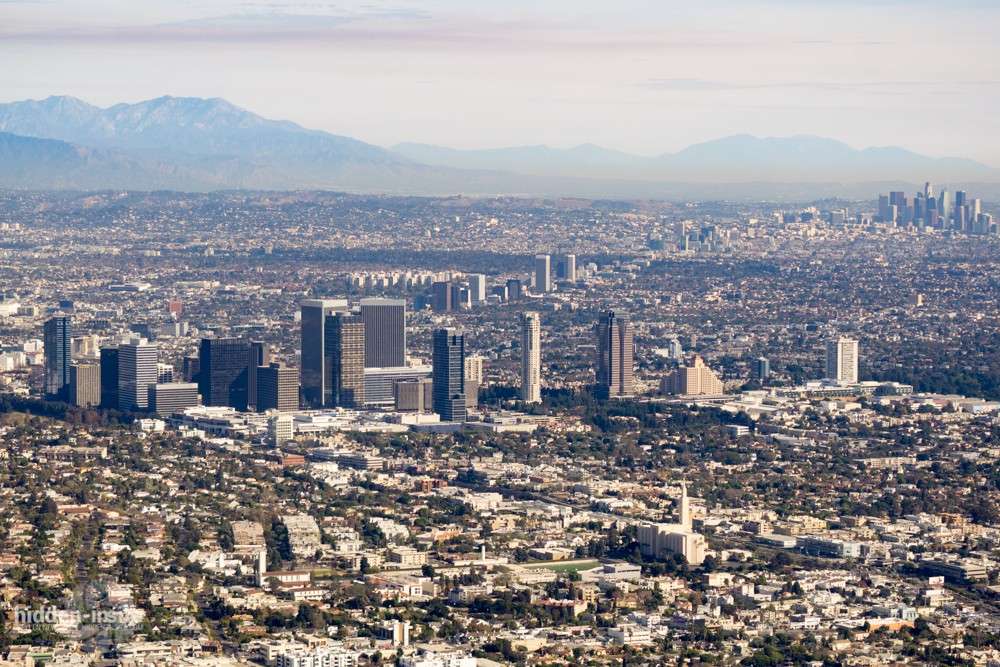 Away from the hills, we flew over the vastness of the LA basin, the rows and rows of houses, the commercial strips and light industrial areas. Los Angeles is home to so many people from so many places: Mexico, Korea, China, the Armenian diaspora, every corner of Europe. If you follow the restaurants, you can eat a different cuisine every night and never catch up.

We passed over my old West Hollywood Fairfax neighborhood, over the high school football field, on our way to the coast. As we neared Marina del Rey, John quit talking to us and started communicating with the towers at LAX and Santa Monica to get clearance for our shoreline excursion. 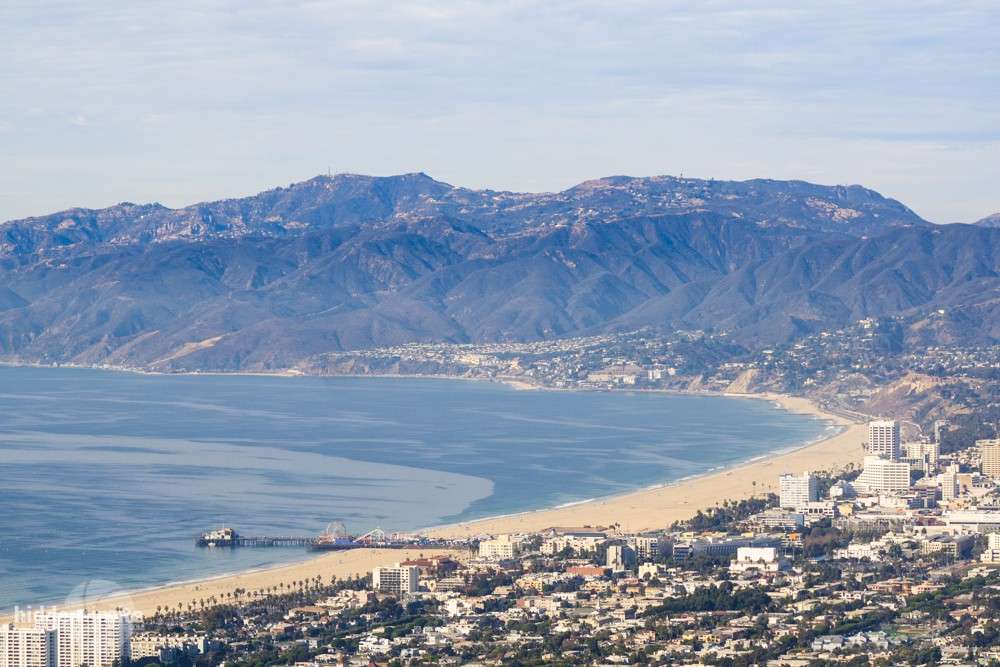 There they were, without the traffic and fuss to get there, the glorious Venice and Santa Monica beaches. It went by so fast I barely had time to remember the dunkings I got in the ocean, the drip castles I built, fun with friends at the Santa Monica pier and the long bus ride home from the beach during junior high school. By high school, we all drove and headed further north to even better beaches. 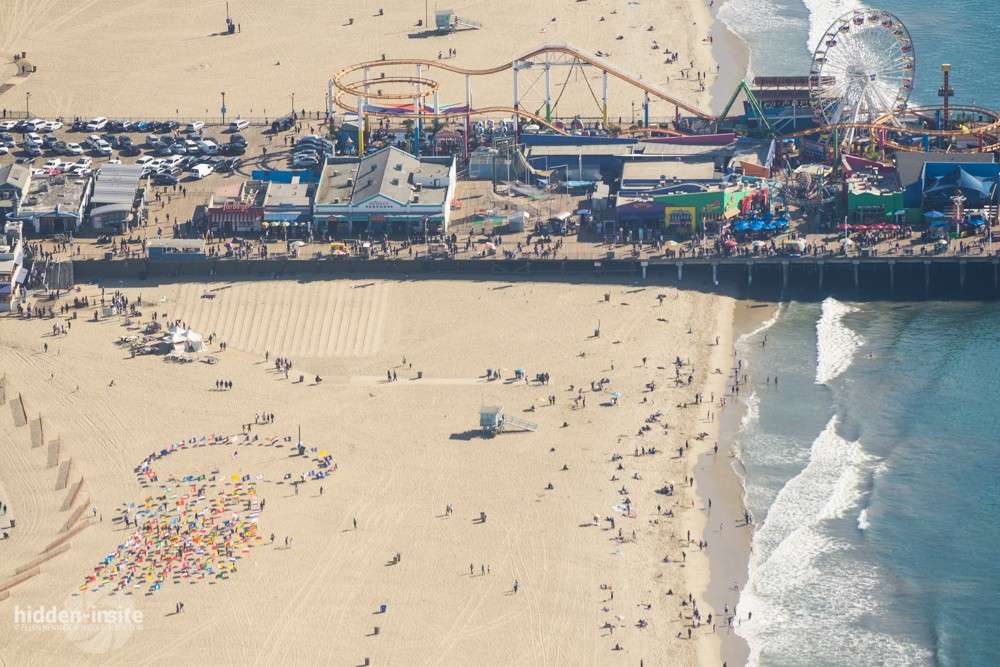 Inland again, this time further west, we flew past scenes with more recent memories. In the middle distance we recognized the red tiles and bricks of UCLA, where I started college and David and I went to graduate school. As a freshman, that’s where I saw Bob Dylan in concert and mourned on the day JFK was assassinated. 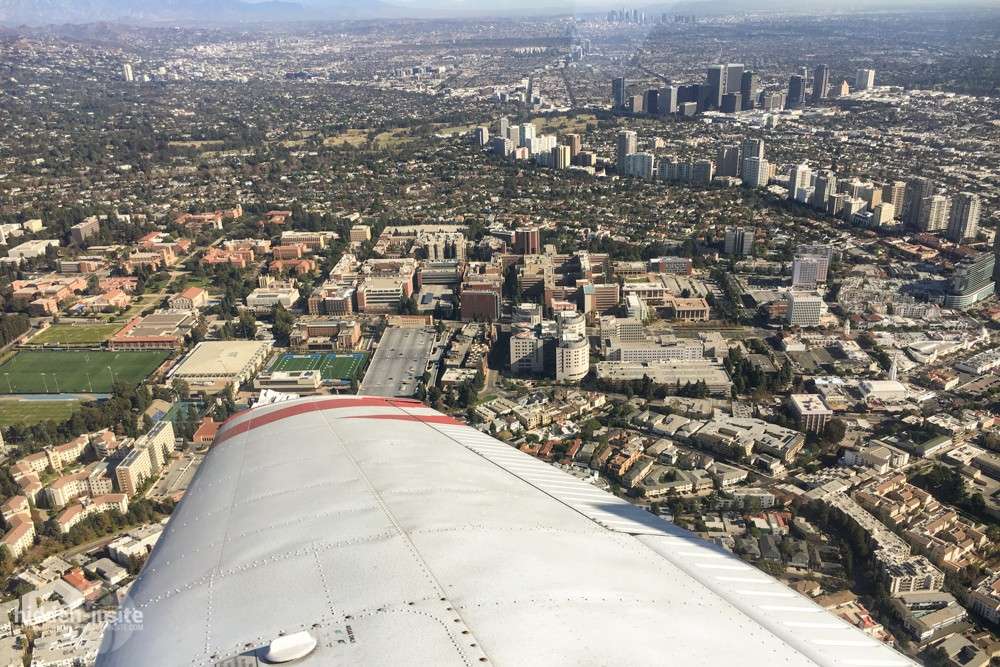 We flew past the Stone Canyon reservoir near the hillside home my father lived in when David and I got married and glimpsed the Wilshire Boulevard condo he lived in later. In the distance we spotted Fredi and Paul’s Beverly Glen neighborhood. We also got a good look at the Getty Center, a more recent cultural landmark. 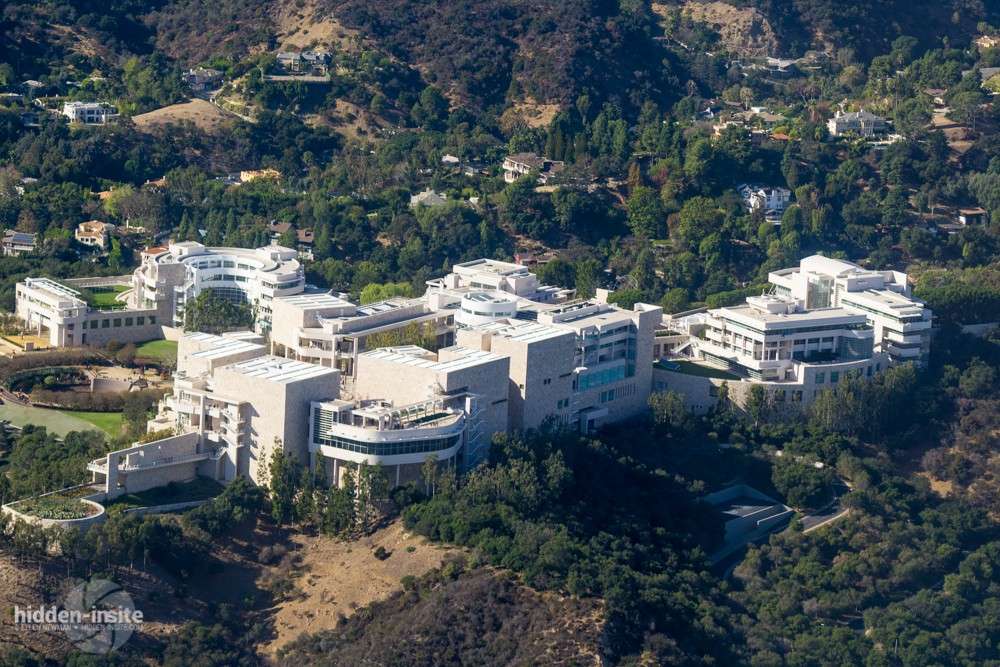 Again following a familiar freeway, “The 405,” as Angelinos call it, we lifted up and over Mulholland Drive and back into the San Fernando Valley. We circled the Van Nuys airport, waiting for other planes to land, before we touched down and the flight itself became another LA memory.

Thank you Fredi and Paul for one of the best gifts ever.