My initiation into Chinese New Year Singapore-style began with a blur of arms and chopsticks tossing a salad of raw fish, brightly colored veggies and toasted golden rice crackers high above the dining table. I was with a group of ten at the Silk Road restaurant in the Amara Singapore hotel on the fringe of Chinatown sampling yu sheng, Singapore’s signature Chinese New Year culinary creation.

The yu sheng came to the table perfectly composed with piles of grated vegetables, candied melon and lime, red and white pickled ginger, shredded pomelo segments, sesame seeds, and julienne jellyfish. With great ceremony, the waiter added plates of raw fish (yu) for abundance, chopped peanuts for a house full of gold and silver, coin-shaped crackers for wealth, lemon for a fruitful year, plum sauce for a sweet year, and salad oil for a smooth year glistening with wealth. With each addition to the dish, he called out a phrase wishing us prosperity, abundance and good luck, even piles of gold at our feet. 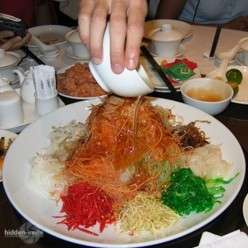 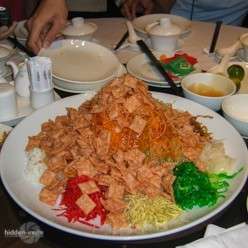 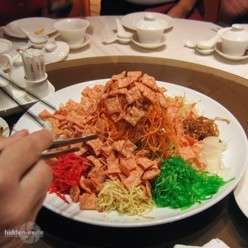 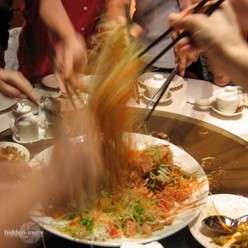 Then it was our turn to stand up and toss. Brandishing our chopsticks we shouted “lo hei,” the customary toast to “stir or toss up life,” which sounded a lot like “l’chaim,” the traditional Jewish toast to life. Flinging the salad high to generate good luck for the coming year, we caught the infectious Chinese New Year spirit. 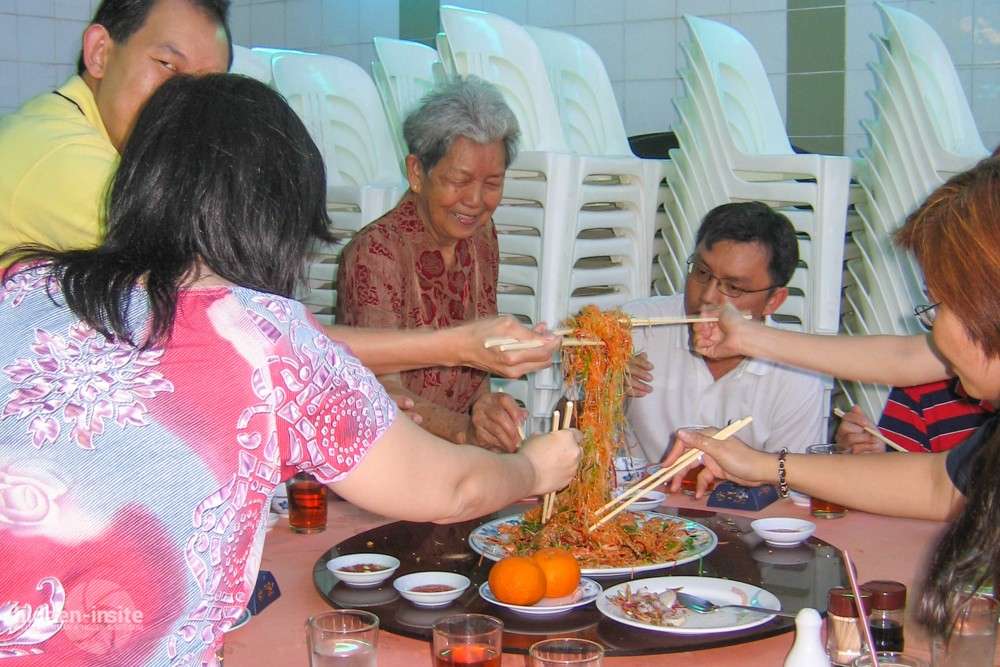 Like so many things in Singapore, yu sheng is an artful blend of tradition and commerce. Allegedly invented by restaurant chefs in the 1950s, ‘60s or ‘70s, depending on whom you read, the dish takes traditional Chinese New Year specialties like raw fish and mixes them into something unique to Singapore.

Just as yu sheng flies off the plate in a burst of exuberance and optimism, during the “festive season” – the weeks surrounding Chinese New Year – the holiday spirit transforms Singapore. People’s exuberant feelings infuse Singapore with a carnival-like atmosphere quite unlike the efficient, businesslike face it usually presents to the world. 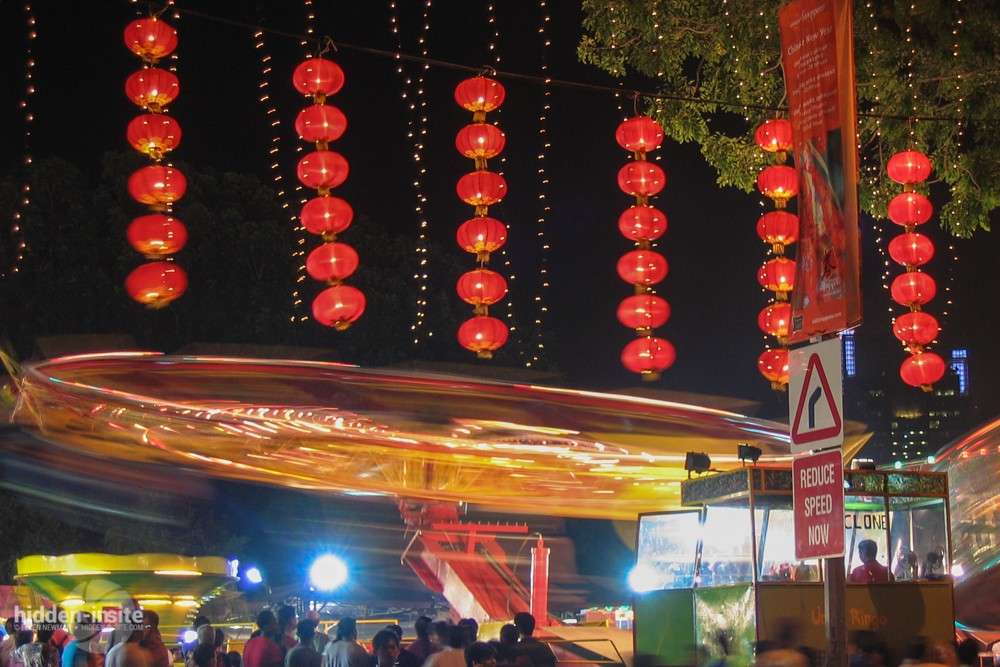 But true to Singapore’s commercial nature, almost every New Year’s custom I encountered and enjoyed was a palpable wish for prosperity – not really a surprise in a country that bootstrapped itself from third-world conditions into a successful first-world country in just one generation. 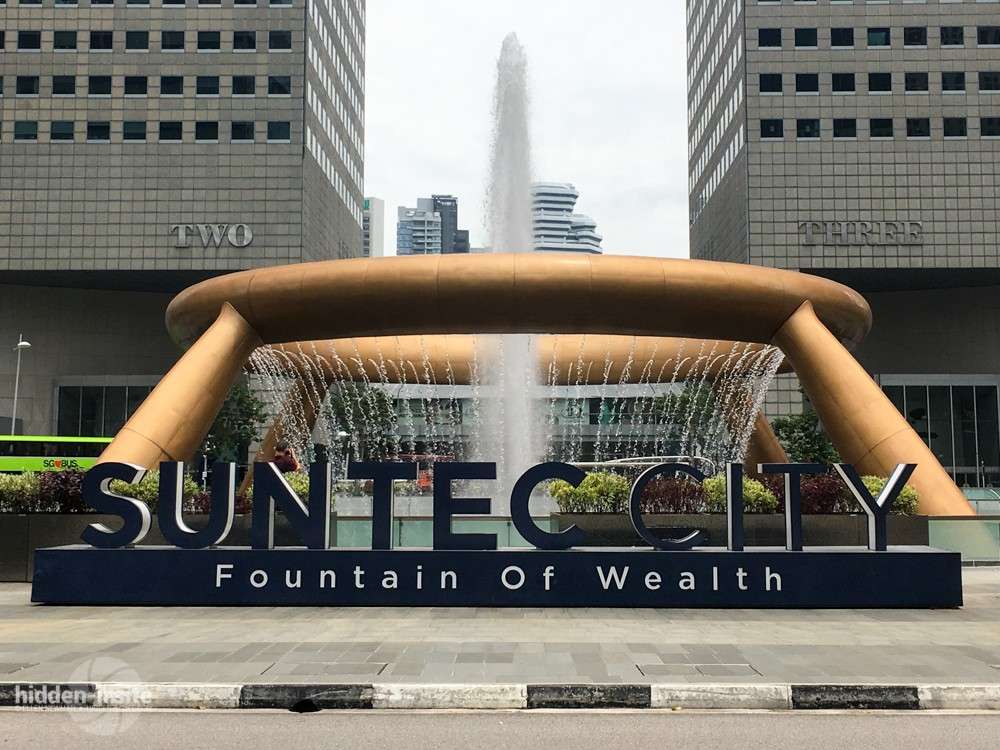 During the weeks leading up to Chinese New Year, more than 500 street vendors line Pagoda, Temple, Trengganu, Sago and Smith Streets, hawking everything from delicacies to knick-knacks to usher in a lucky year. As my Singaporean friend Sharon Ho explained, “Everything for the New Year has to start on good footing, so you have to do all the symbolic things. It’s very important that everything is perfect.” 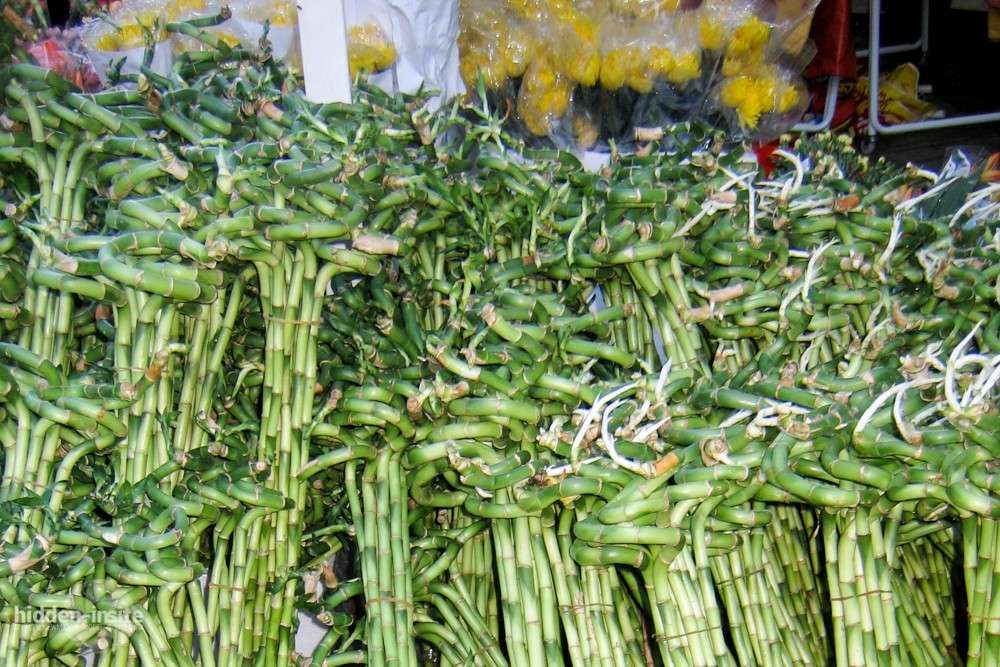 Throngs cruised the night market in search of treats to make their celebrations complete. In the warren of packed streets I passed forests of lucky bamboo, tall, strong, resilient and curled on top, signifying changing fortune – for the best, of course – and fruit stands bursting with golden mandarins, pomelos, pumpkins and gnarled Buddha’s hands, symbols of abundance and wealth. 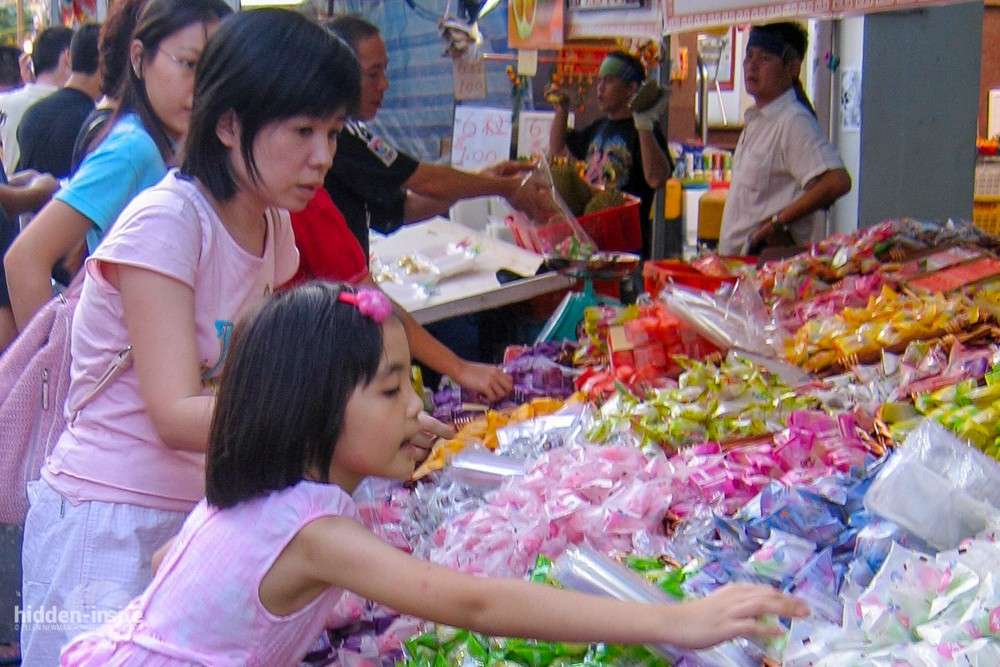 Shoppers crowded five deep in front of bins of candies and sweets. Plastic containers of cookies, biscuits and pineapple tarts were piled so high they threatened to topple over. Like yu sheng, pineapple tarts are an indigenous treat. Originally Malaysian, the sweet, fibrous confections were adopted by the Chinese who migrated to Singapore in search of a better life. The best pineapple tarts are homemade, of course, but demand is so high that shiploads of tarts are imported from China and Malaysia. 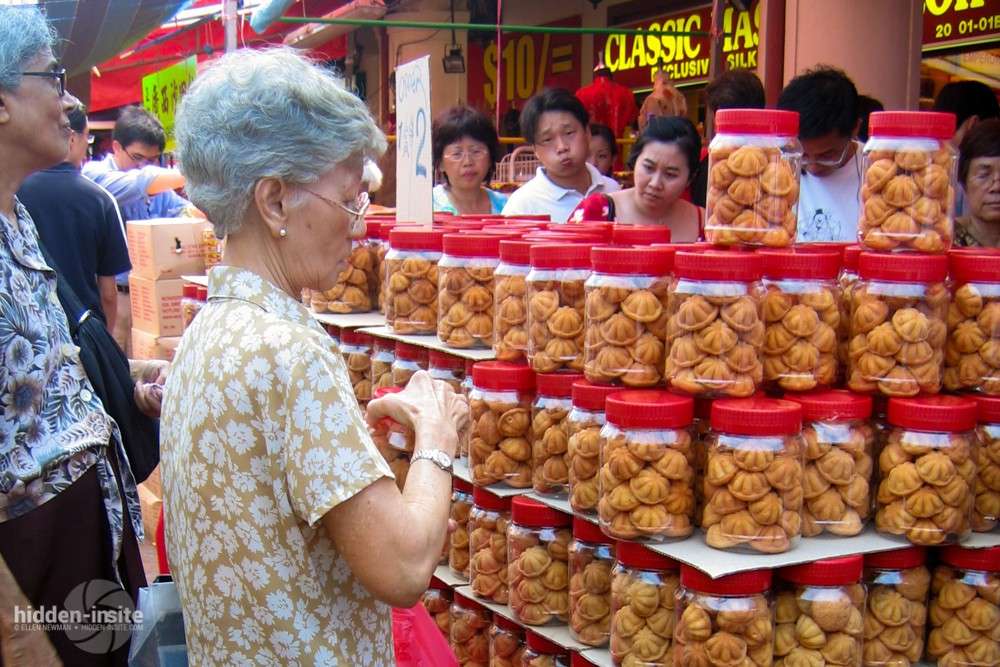 All around, the streets exploded with red lanterns, streamers, ornaments, tassels, decorations, toys, Chinese zodiac figures and festive lights to usher in the holiday. 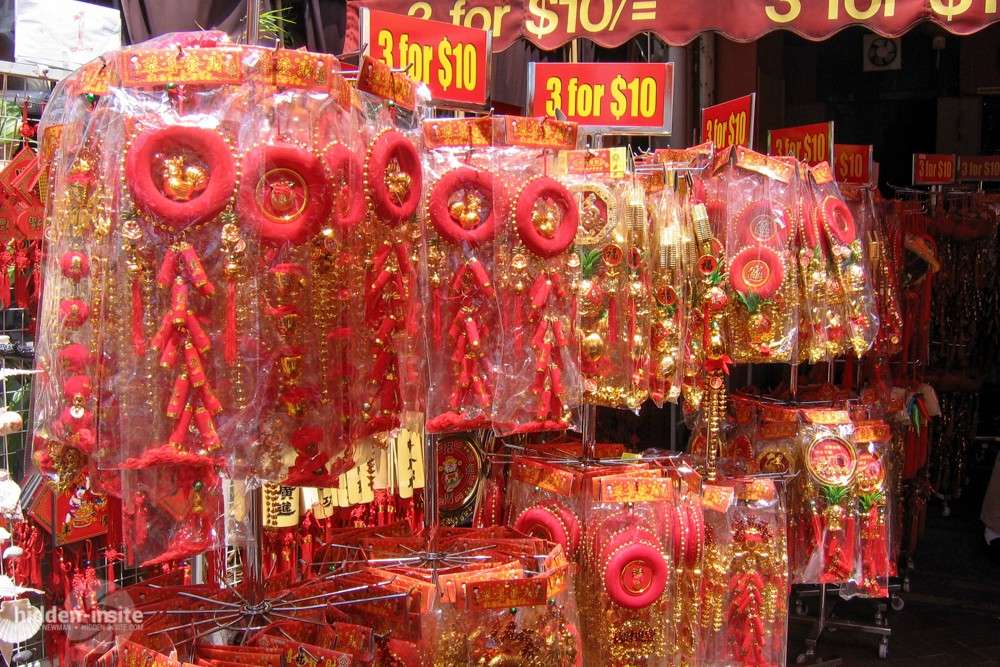 Late into the evening beaming grandmas indulged their families, many dressed in red or pink New Year’s finery. Dads carried excited toddlers on their shoulders so they could see above the crowds. Muslim families brought their children to enjoy the party, and Indian ladies promenaded in flower-colored saris. This being Singapore, the streets were safe, if crowded. 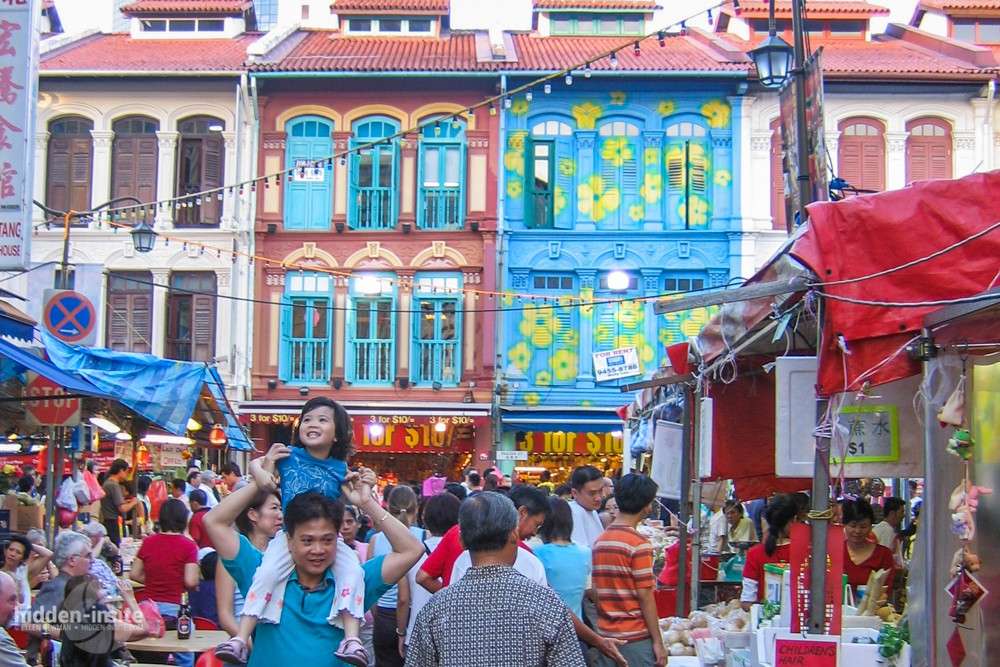 Encountering the God of Fortune

I kept hearing about the God of Fortune, the Lucky Man. For years the God of Fortune had been a regular feature of the Singapore River Hongbao Festival that transforms Singapore’s Esplanade Park along the river into a Chinese fantasyland. When organizers of the million-dollar festival proposed dropping the Lucky Man a few years ago, the popular response was, “No way.” He was back, and I had to see for myself. 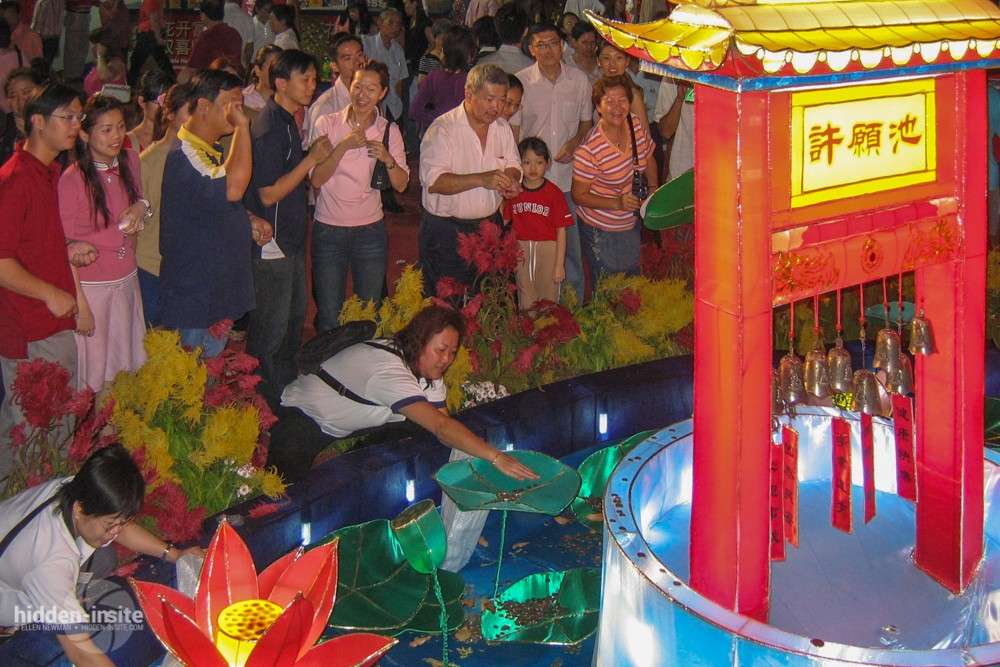 I wound my way through the fair, past rides and the popular wishing well, past the candy stands selling a spun honey and peanut delicacy called “Dragon’s Beard,” past stages pulsing with entertainment and past the gambling tent that housed a variation of bingo. All around me, Singaporeans were having a grand time – until I got to the central plaza around the towering Lucky Man. Bedecked in a celestial pink headdress and an auspicious mandarin-red robe, he held pots of gold in one enormous hand and a banner offering good wishes in the other. There, suddenly, everyone was serious, intently watching the enormous effigy of the God of Fortune. 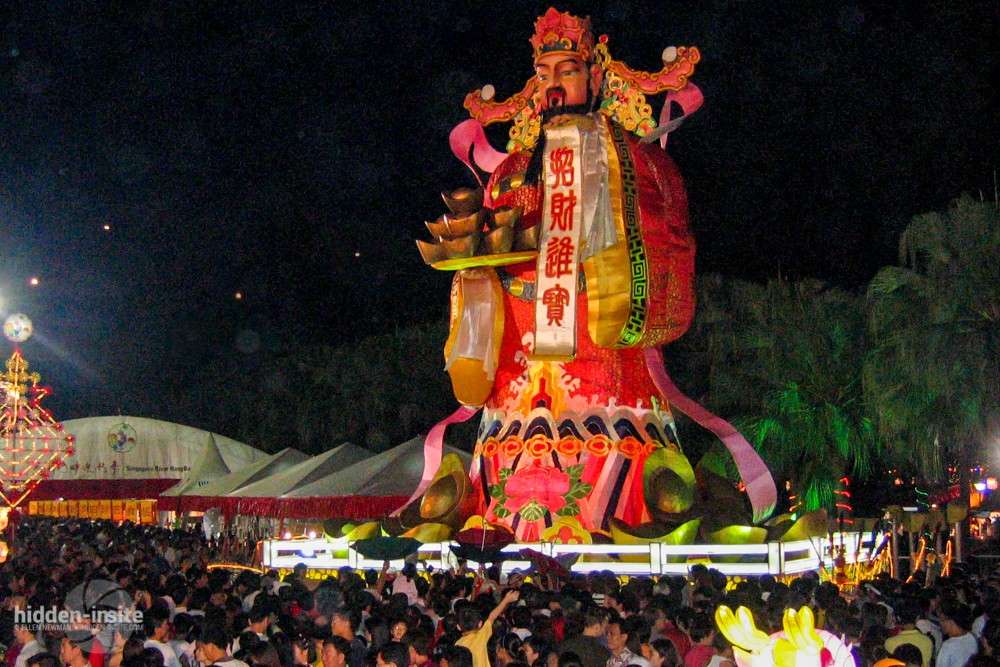 Adults stood rapt as children, enduring the 30-to-40-minute wait for him to spew gold dust their way, ushering in a prosperous New Year. As the time approached, one upside-down umbrella shot up, then another. The crowd waited on the edge of impatience, pushing in, hoping to catch the golden confetti. Finally, it came, a sprinkling of coveted gold dust. It was over almost before I realized it had started. Like great good fortune and lottery prizes, this god’s bounty was sparse. People bent down to scoop up whatever confetti remained on the ground, clinging to the belief that whatever happens on the New Year will color their luck for the entire year. 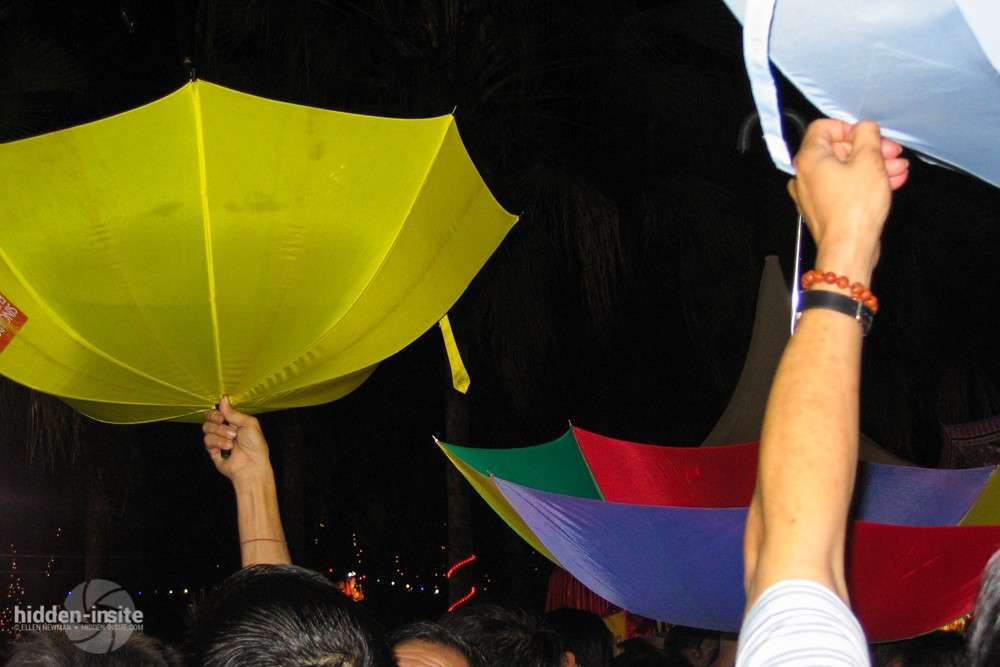 Maybe it’s true. Amazed by the spectacle, I was still standing near the God of Fortune when organizers roped off an area for the Dragon Dance. By doing absolutely nothing, I was right in front with a clear view of a team of amazing dancers and acrobats doing everything in their power to ward off evil spirits and bring us all New Year’s luck. 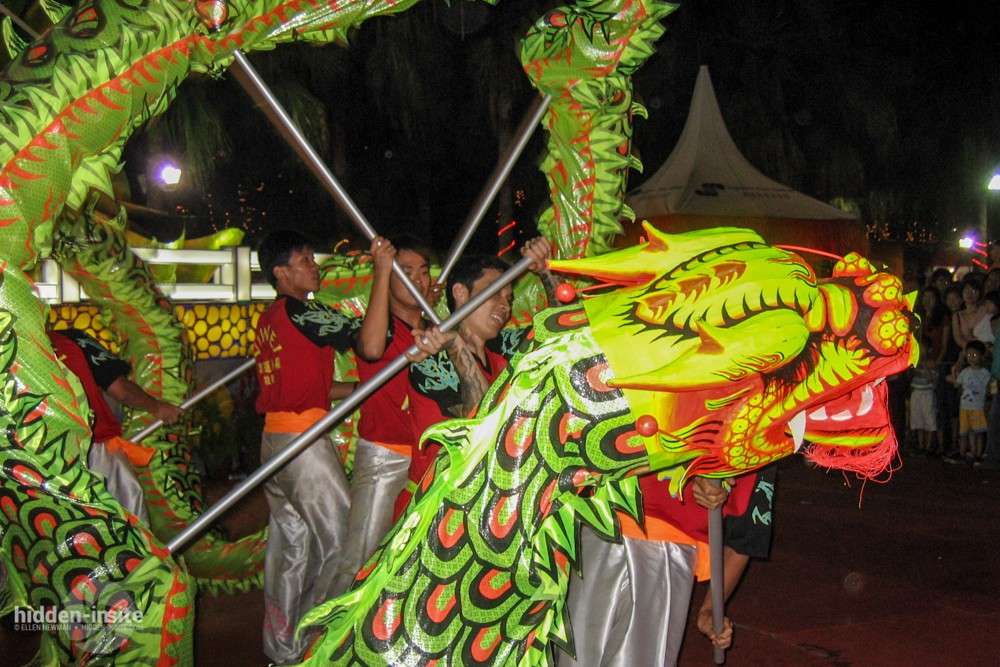