The Presence of the Past in the Israeli Desert

The full moon cast eerie shadows along the curly ribbon of trail etched into the dry wadi at the base of Masada. Once water flowed where our footfalls crunched the pulverized remnants of ancient stones. A babble of voices — Hebrew, English, Russian and French — exclaimed the equivalent of OMG as we scrambled up and down the lunar landscape in the semi-darkness. We were a busload of eager tourists from the Ein Gedi kibbutz and Dead Sea spa on a moonlight adventure in the desert. 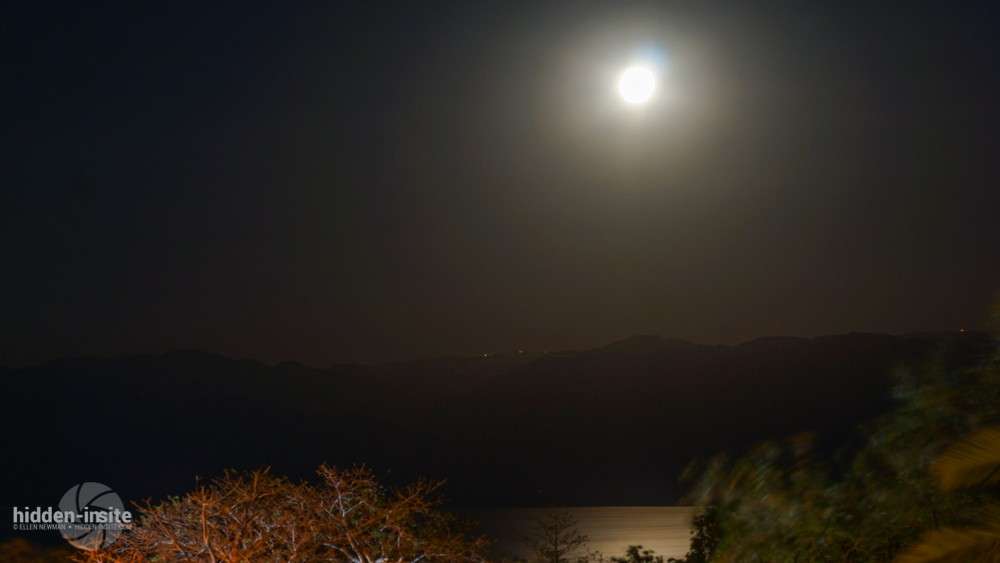 Moonrise over the Dead Sea and the hills of Jordan.

I felt like I was back in summer camp until the faint notes of a recorder floated across the soft warm air. We hushed to listen as we drew closer. The player was our guide, nestled against the rocks as an ancient shepherd might have been. His primal melody, so filled with longing, wound me back in time to the days of the Israelites wandering the desert. I began to imagine what it might have been like to experience the heat, the relentless sun, the irritating sand, the scarcity of water and food. And the immensity, day and night, long vistas and endless sky.

No wonder it is said that the desert is the birthplace of the world’s great monotheistic religions. Sunlight here can play tricks on the landscape. A bush can glow like it’s burning. A windstorm gathering dust miles away can look like the wrath of God. The desert’s dramatic signs would make me listen … and perhaps believe.

But I’m a modern American trying to understand Israel from the ground up. Before my husband David and I left for Israel in the spring of 2015, we read Bruce Feiler’s Walking the Bible, a modern exploration of the land where the iconic stories of the Torah took place. We didn’t attempt to follow Feiler’s comprehensive route in our week in the desert, and we definitely didn’t have Avner, his trusty Torah-quoting archeologist, to teach us along the way. But their openness to experiencing the land simultaneously in the present and the past informed our own wandering through the Israeli desert. 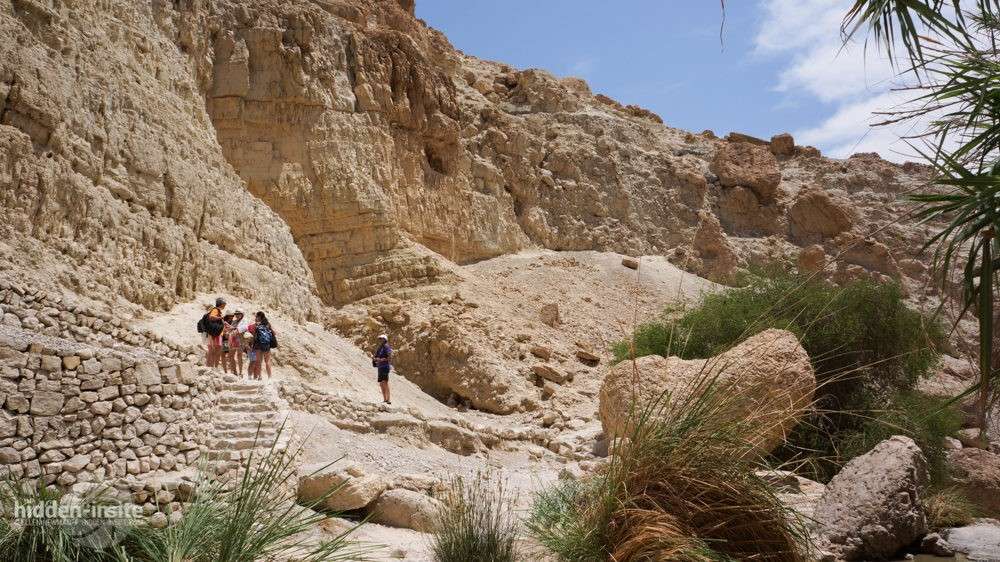 The trail up to the springs at Nahal David, David’s Springs. The limestone hills are riddled with caves.

The morning after our moonlight walk, we hiked up the hills to the west of the Dead Sea to Nahal David, David’s Stream. Yes, that David. It was here in one of the many caves that dot the hills that David was said to have to have hidden from the wrath of Saul. 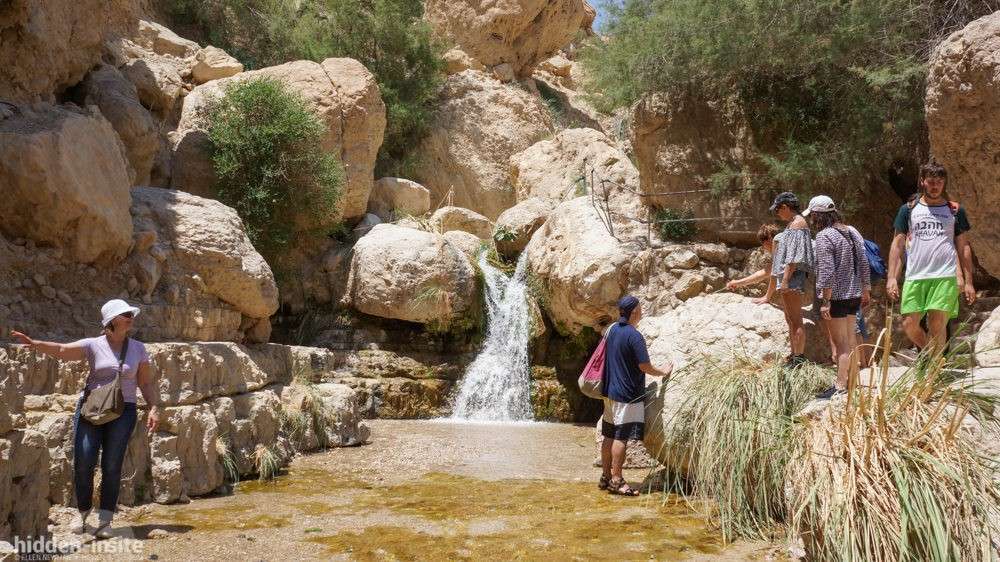 The trail to Nahal David is popular with Israelis and tourists alike.

The stream cascades down the golden canyon in a series of beautiful pools, today a popular destination for tourists, hikers and groups of Israeli soldiers learning about their country. The first lesson, of course, is that water is precious in this arid land. Every spring releasing water from the earth is a miracle.

Down the road — Israel’s Highway 90 — Masada looms over the Dead Sea, the lowest point on earth, in the valley that stretches between Israel and Jordan. Looking out from the top of the Masada plateau, all one sees is a series of landforms in varying shades of sand and taupe. Salt and sand. Principal industries on both sides of the border include mining the unique Dead Sea minerals, spa resorts and manufacturing cosmetics that also take advantage of the local minerals. 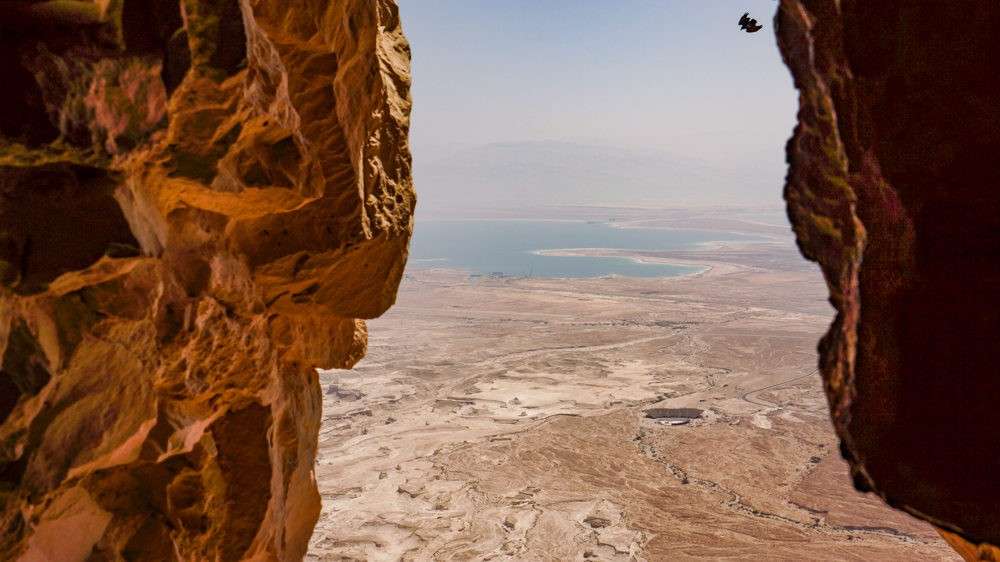 A bird’s-eye view of the land near the Dead Sea and the hills of Jordan beyond, from the top of Masada.

The real drama is up on the golden mountain where Herod the Great, the king of Judea, built a fortress and two palaces between 37 and 31 BCE. From his aerie one could see for miles around. No enemy was going to surprise him. His two-level northern palace was situated on the edge of the precipice and contained banquet rooms and porticos all around. It was the original fabulous home with a view. 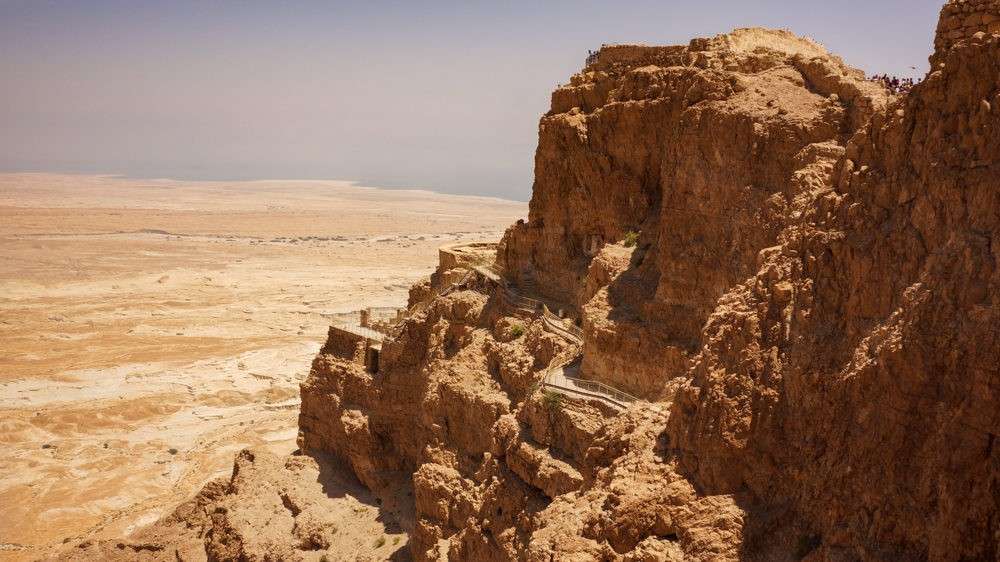 The cliff-face terraces are ruins of one of Herod’s Masada palaces. No unexpected guests at his door!

After Herod died, the Romans turned Masada into a garrison. But Masada is perhaps best remembered as the site of the last stand of a group of Jewish zealots in year 73, three years after the Temple in Jerusalem was destroyed. According to the Roman historian Josephus, 960 Jews committed mass suicide there, though remains of only 28 bodies have been found during modern excavations. It was the last tragic chapter of the great Jewish revolt against the Roman Empire. 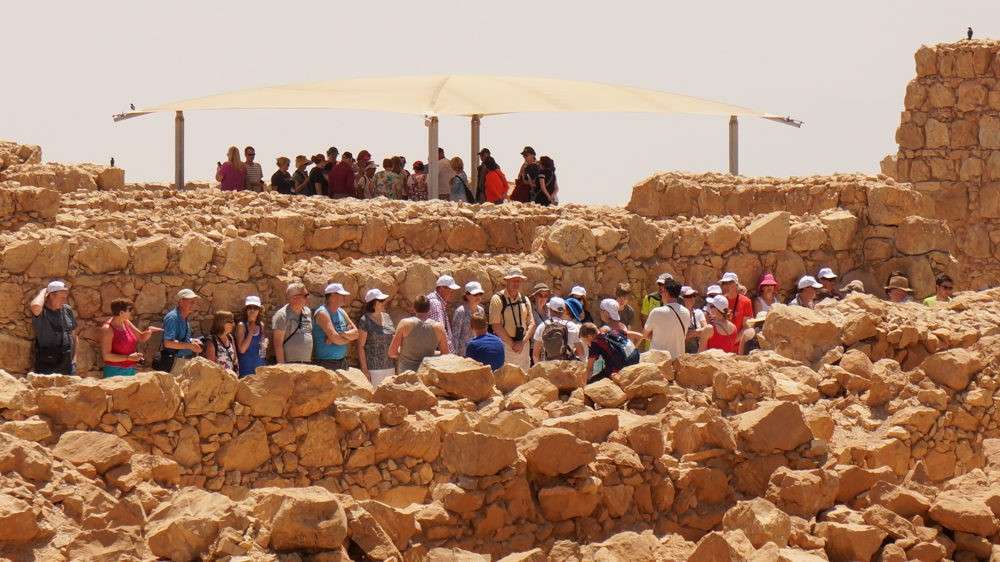 Masada, with its dramatic stories and spectacular views, is one of the major tourist attractions in the world.

I could have stayed at Masada all day, learning more about the Jews and Romans who lived there at the dawn of the Christian era. But the road south beckoned. 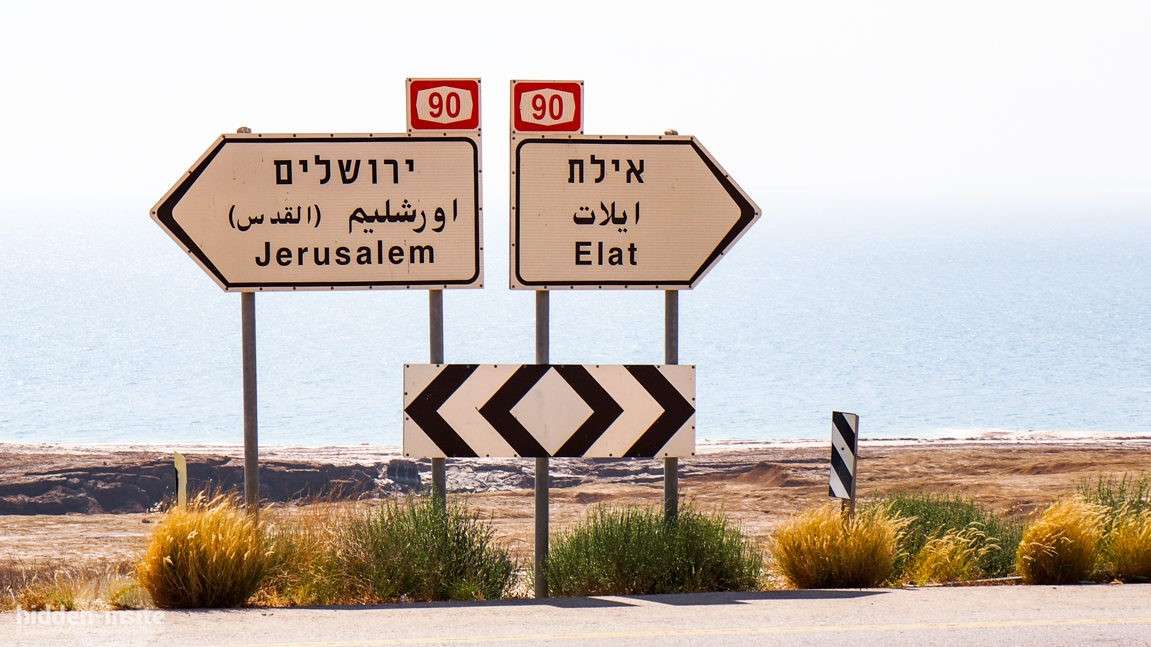 Highway sign at the junction to Masada points the way south.

From Masada we headed to the Negev, the wedge-shaped high-desert plateau that gives Israel its distinctive shape. Its beautiful barren land makes up about 60 percent of Israel, but it is home to less than ten percent of the country’s population. The word “negev” means “dry south country.” Indeed, it is. We drove for hours, bypassing Beersheva, the largest city in the Negev, and skirting Dimona, home of Israel’s nuclear power plant. We could see industrial plants in the distance, almost like mirages, but most of the afternoon was spent traversing an endless expanse with no mini-malls, no McDonald’s, no roadside Aroma cafes. 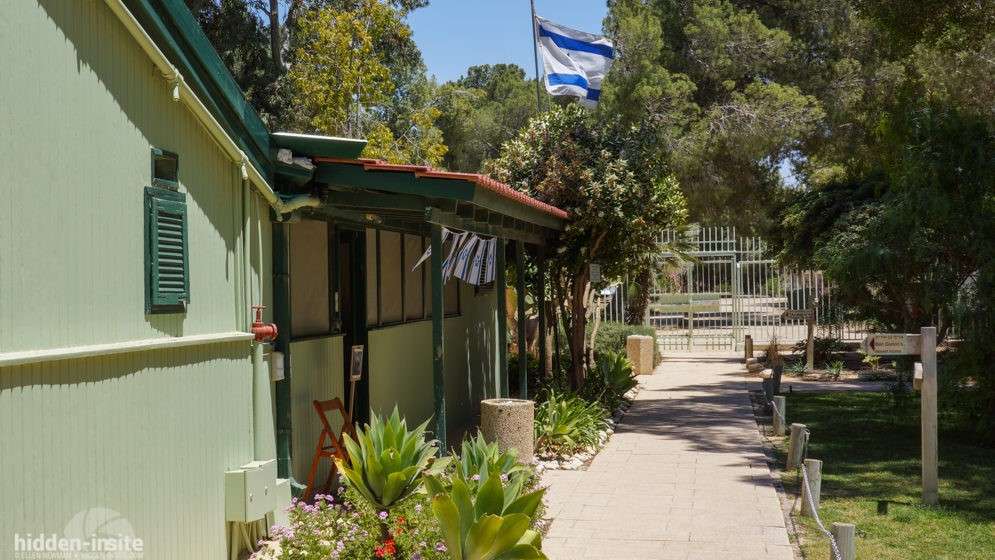 David Ben-Gurion, the first prime minister of Israel, and his wife Paula retired to this modest bungalow in the Negev.

In the late afternoon heat, we stopped for an ice cream and to pay our respects at Kibbutz Sde Boker, the simple bungalow retirement home of Paula and David Ben-Gurion, Israel’s George Washington. Ben-Gurion, who banged the gavel in May 1948 to proclaim the state of Israel and who became its first prime minister, famously urged Israelis to “make the desert bloom.” Twice he retreated from public life to retire to the solitude of the Negev. He later wrote in the New York Times, “Here a person sees primeval nature in all its strength, unchanged and undisturbed by human hand.” Indeed, from Sde Boker one can gaze across the sands and feel the presence of the past.

Just minutes down the road lies Avdat, the remnants of one of the major way stations of the Nabateans, who controlled the lucrative incense route from Yemen and Saudi Arabia, through their capital Petra, to the port of Gaza more than two thousand years ago. Each caravan of ten to twenty camels carried up to four tons of precious cargo destined for Greece and Rome. 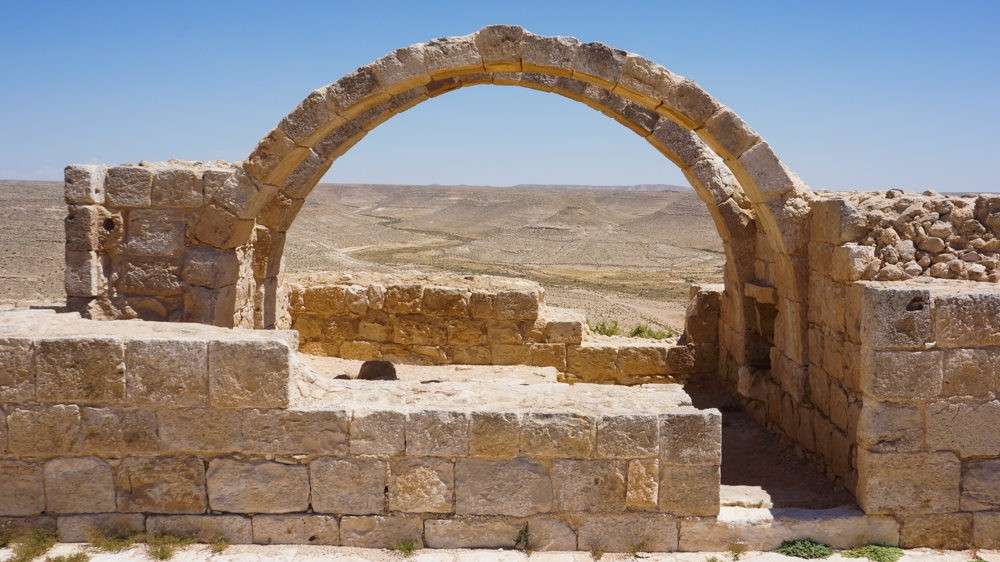 The ancient town of Avdat is perched on a hill overlooking the Negev highlands.

The archaeological site spans nearly 700 years of settlement from the Nabateans to the Romans and then the Byzantine Empire. It was a prosperous place with vineyards, a winepress, cisterns, a fortress and a church. It was abandoned after a major earthquake in the seventh century. Avdat, like Masada, showed us the layered nature of history in the desert, as one civilization built upon the remains of the ones that came before. It was also a beautiful spot to gaze out over the land that, long before Ben-Gurion and modern Israel, others had once made bloom. 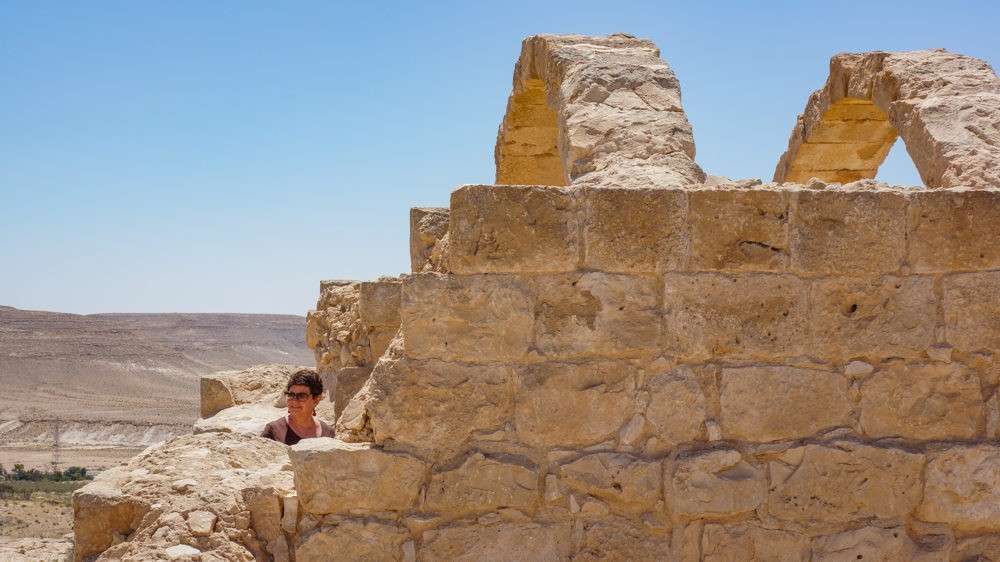 Looking out over the desert from the Byzantine ruins.

Back on the road, we still had miles of driving to go before we reached our destination, a five-star resort perched on the lip of a desert crater. Along the way, roadside “camel-crossing” signs kept teasing us. Alas, the only camels we saw were metal sculptures near the Avdat parking lot! 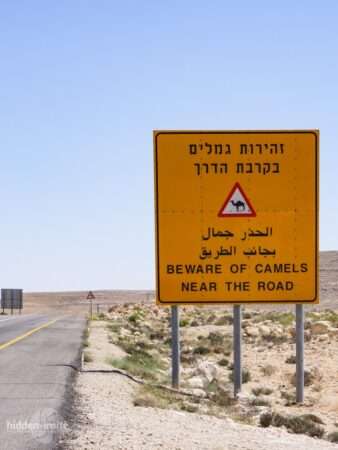 I had read about the hotel Beresheet in Travel and Leisure or Conde Nast Traveler and insisted that we add it to our itinerary. Just the name of the hotel—Beresheet means “in the beginning” and is the first Hebrew word in the Torah—had a cheeky arrogance that implied something beyond special. I had to check it out. 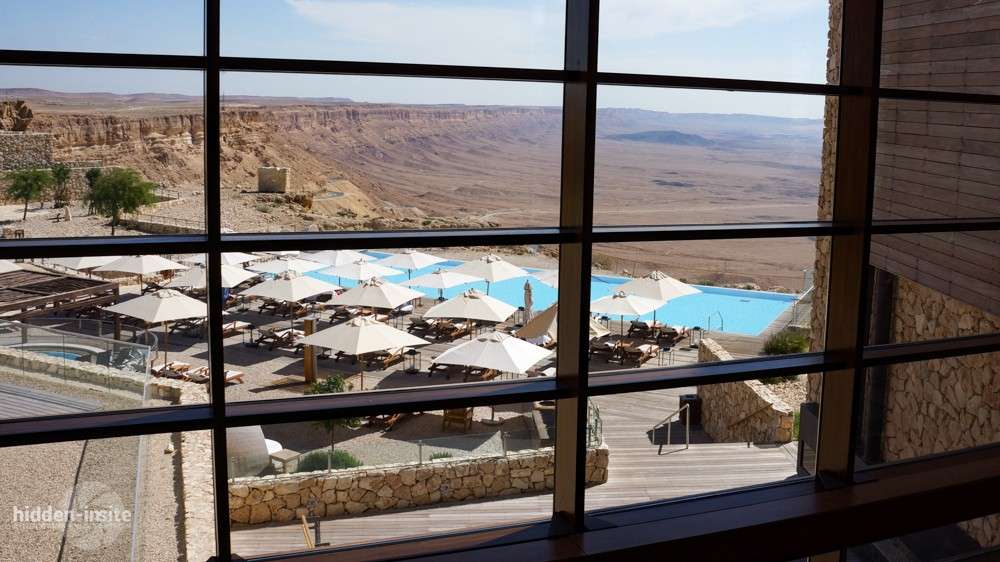 The pool at Beresheet overlooks the edge of Makhtesh Ramon.

What I didn’t quite realize until we arrived is that the hotel is perched on the edge of Makhtesh Ramon, the world’s largest erosion crater. It’s like having a luxe hotel balanced on the rim of an extinct volcano or caldera. From the deck of each room, you can see for miles, across an arid landscape of hills, mesas, plateaus, outcroppings and canyons. I couldn’t wait for our jeep tour of the makhtesh the next day. 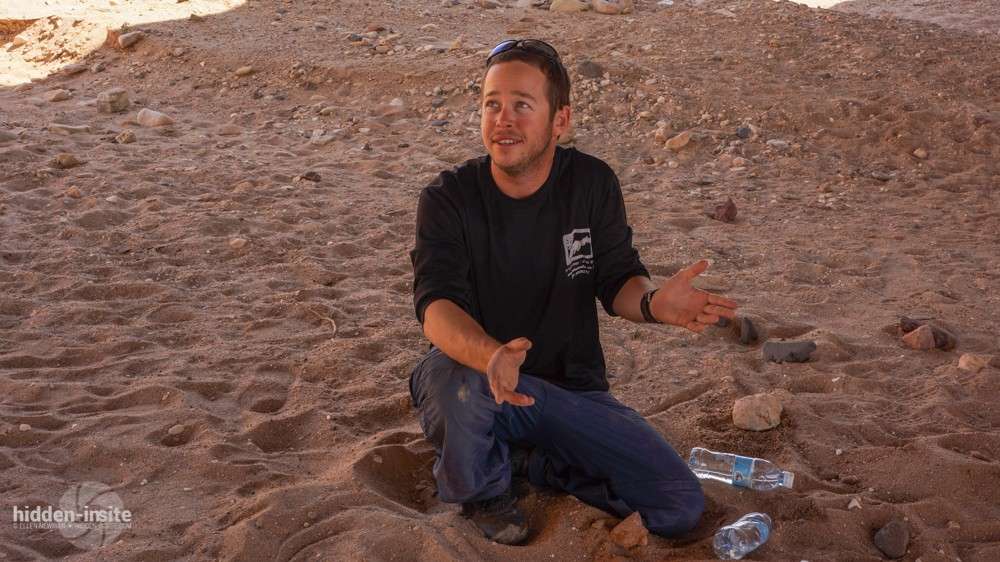 Our guide, Nadav Sela, describes the formation of the makhtesh, a landform unique to Israel and the Sinai.

In the shade of a highway overpass, our guide, Nadav Sela, described the makhtesh. “This,” he pointed out, gesturing around us, “is what’s left after eons of erosion sculpted an ancient mountain with hard rock on the outside and softer rock in the center.” 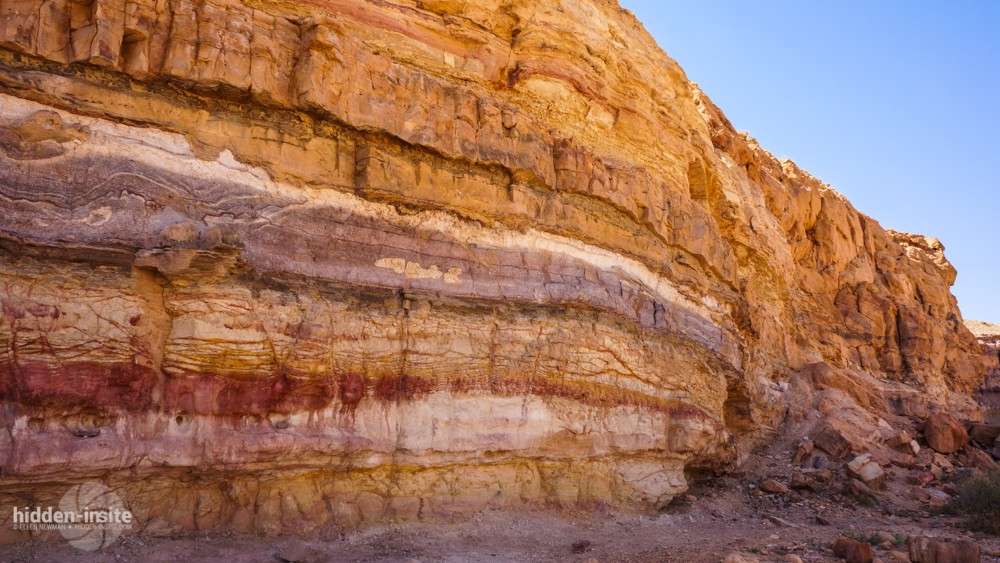 Bands of minerals color the walls of Makhtesh Ramon in the Negev.

After our quick geology lesson, we scrambled into the jeep and headed out over dirt tracks, up and down hills, past Nabatean ruins and native thorny acacia trees. We paused for close-up views of canyon walls layered in tones of red, gold and mauve, and climbed to the top of Mt. Gvanim to see the full expanse of the 25-mile-long crater. I hung on tight around sandy turns and vertical pitches. It was exhilarating to be the only people we could see for miles around in this barrenly beautiful primal landscape. 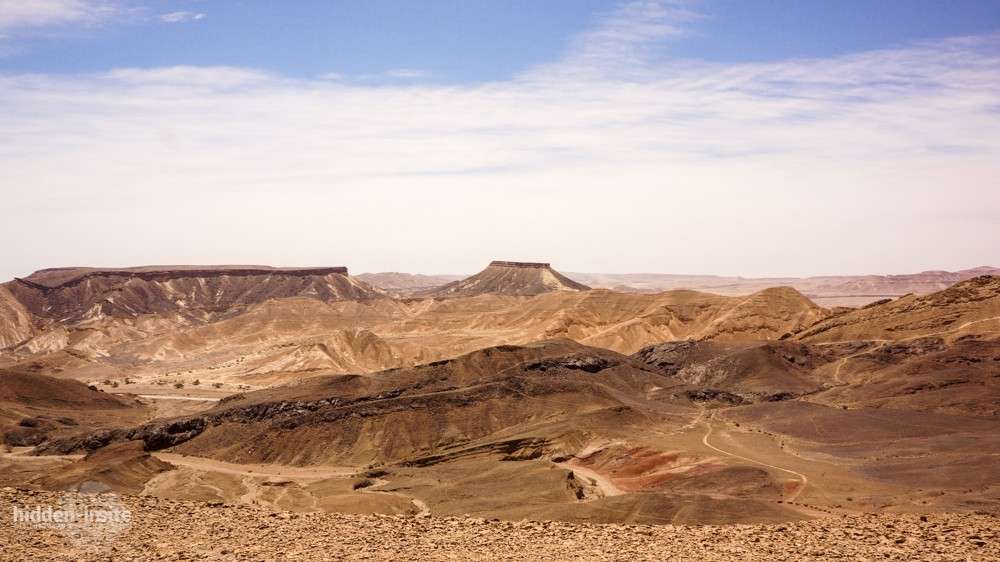 The 25-mile long Makhtesh Ramon from the top of Mt. Gvanim.

Back at Beresheet, in the middle of the night I stepped onto our deck overlooking the vastness of the makhtesh. The air was cool and dry. Stars filled the sky. Breathing in and breathing out, consciously, slowly, I imagined myself back to the beginning and wondered about the Jewish matriarchs, Sarah, Rebecca, Rachel and Leah. What was their experience in the desert? Did they realize they were the beginning? I felt a thread stretching from their time to our own, and once again sensed the presence of the past in the desert air.