Sacramento: Citizen Lobbying for a Day

I remember fifth-grade social studies. That’s where we studied how government works. We saw charts of the three equal branches with an executive office, a courthouse and a legislative chamber. We were taught that decisions are made by the people, for the people. At least that’s how it’s supposed to work. And we were encouraged to participate, to make our voices heard.

I remained fascinated by the process, lapping up TV shows like the West Wing (C.J. Cregg was my hero), and loving to hate scoundrels in shows like House of Cards. I co-produced a documentary about the first woman lobbyist in California for KVIE-TV in Sacramento in the early years of the women’s movement. We talked about the issues she was championing, like parental leave and equal pay for equal work, as we followed her through the corridors of the State Capitol to the office of then-assembly member John Garamendi. That was the last time I was inside California’s Capitol building. So when my husband David invited me to join a group of people lobbying on behalf of JPAC, the Jewish Public Affairs Committee of California, I enthusiastically signed up. 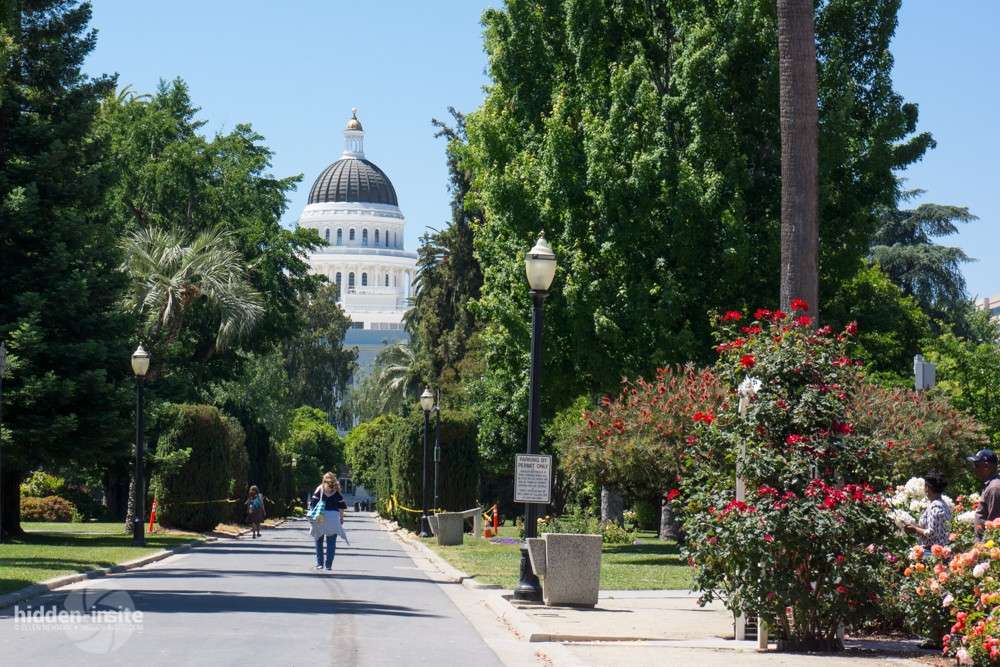 Looking at the State Capitol from Capitol Park. The World Peace Rose Garden is on the right.

Approaching the white-domed California State Capitol through the gracious grounds of Capitol Park in downtown Sacramento, I was reminded that the building and surrounding public park were designed to communicate the importance of a legislature doing the people’s business. In true 19th-century fashion—the building was built between 1860 and 1874—the entire complex conveys an aura of substance. Matters of consequence are discussed and decided here, the building seems to say. Monuments and memorials dot the grounds, along with trees from around the world and gardens for roses, camellias and cactus. 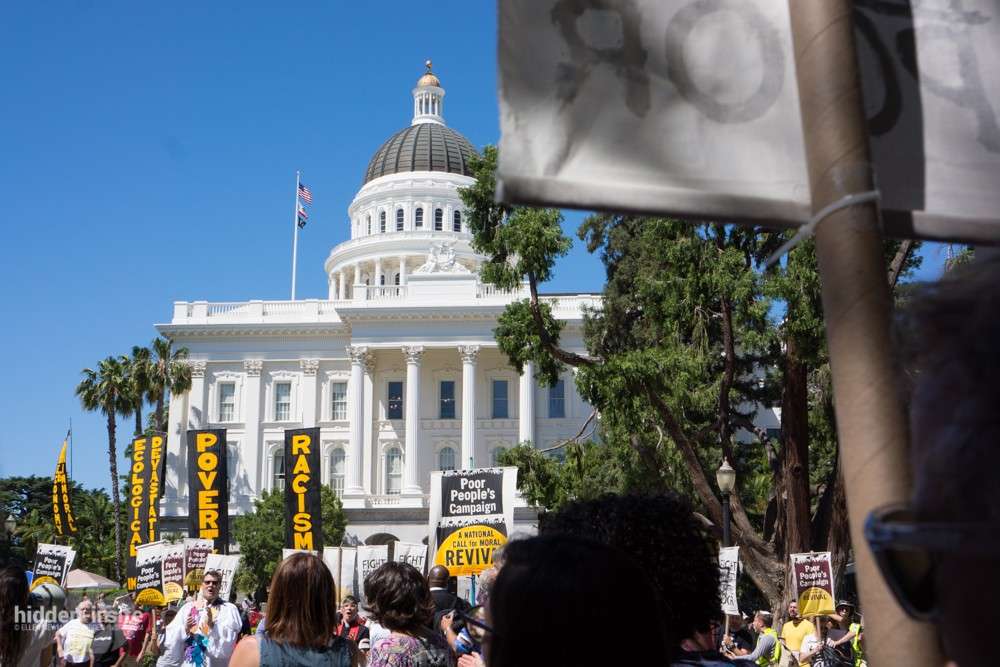 The Capitol is also the backdrop for almost daily demonstrations. The day before our official visit, California supporters of the Poor People’s Campaign, a national organization spearheaded by Rev. William Barber, demonstrated at the south entrance to the Capitol, while immigration rights commanded the steps on the north side.

Our day in Sacramento began with a panel speculating what California will be like post-Jerry Brown. He’s been governor so long, it’s hard to imagine. But our panel, all experienced CA-watchers, noted that he put our fiscal house in order and masterminded a budget surplus to carry us through the next downturn. “Will the next governor keep those funds intact,” they wondered. Senator Holly Mitchell from Los Angeles spoke about income inequality and a package of bills designed to alleviate the impact of poverty and homelessness. “What California do you want to live in?” she asked the crowd of 150 people from northern and southern California. “Safe housing is critical to help people stay or get out of poverty,” she told us. “It’s an investment in California.” 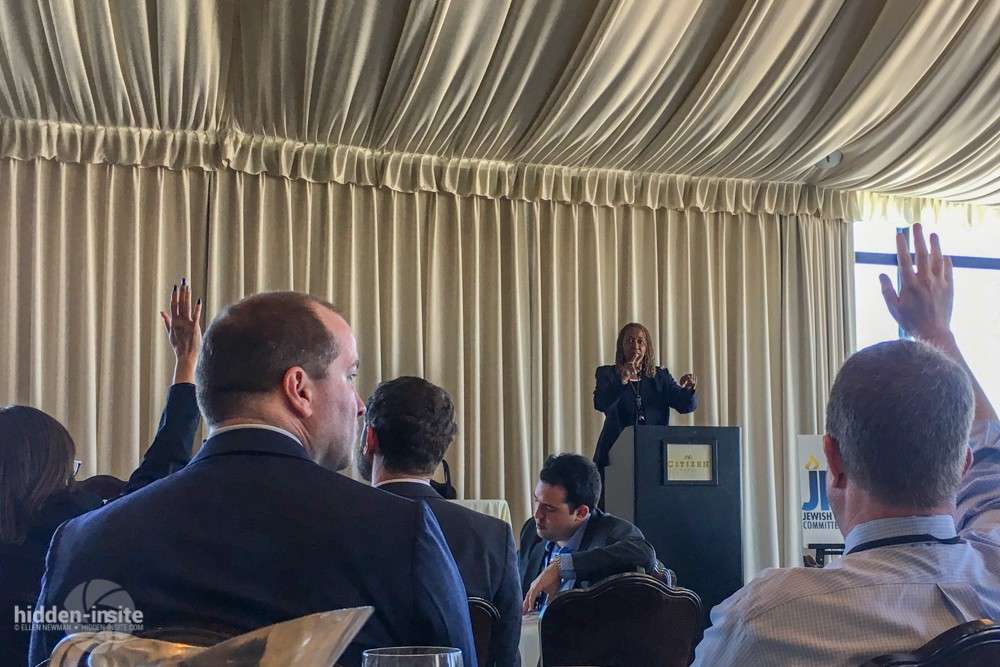 With that pep talk to rev us up for the day’s meetings, we moved on to Lobbying 101. The key point: Be brief and direct. Provide real life stories that reinforce your point and make it easy to understand the issue under discussion. The rest is simple courtesy, thanking the legislator or aide for their time.

We were divided into groups of about eight people with an experienced designated leader. Before heading out to the legislative offices we held our own brief meeting to decide who was going to speak about each bill on our agenda.

The pitch: fighting poverty and hate

We were there to discuss three main items. One was to support the anti-poverty bills that Senator Mitchell pitched to us. The other two items were of particular interest to the Jewish community. One was a budget appropriation for training that would make California a national leader in combating hate on university campuses. The last item was a budget request for funds for homecare and other social services for elderly Holocaust survivors. My role, in support of the California Responding to Hate on Campus Grant Program, was to share a personal experience I had at SF State University two years ago, when the mayor of Jerusalem was shouted down in an anti-Israel incident.

Then off we went, entering the Capitol through the security gate at the north entrance. The line was long, like waiting for a flight. While we waited, we watched a pro-life demonstration on the Capitol steps. Once inside, we found the halls mobbed with group after group. People from all over California were out in force to talk to their legislators. We jammed into a full elevator on our way to meet with a legislative aide to assembly member Kevin Mullin, and then moved on to talk to an aide to Scott Wiener, the state senator from my district. A meeting with assembly member David Chiu, also from San Francisco, was our last meeting of the day. 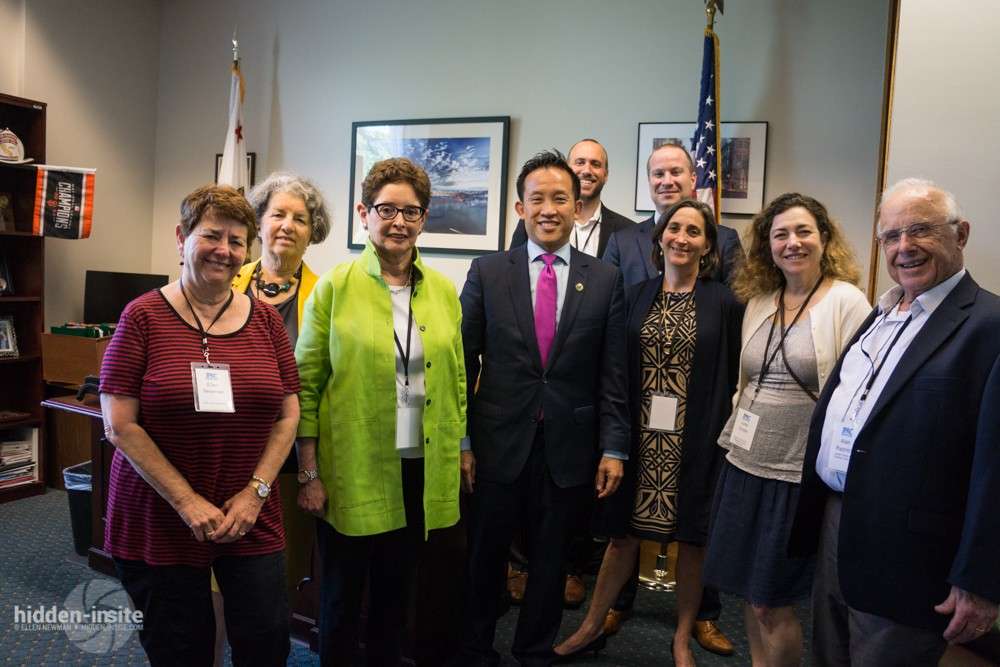 Time for our photo-op with San Francisco assembly member David Chiu. I’m on the left.

Our meetings were choreographed like a well-practiced democracy dance. Our group leader, Jerilyn Gelt, a JPAC board member and recent chair, introduced us and set the tone. We went through the bills and the appropriation requests with dispatch, asked if the legislative member or aide had any questions. Mostly we had a friendly reception. David Chiu had signed on to some of the bills we were supporting, so Jerilyn asked if he had any bills in consideration that we could help with. It was all very cordial. My persistent question was, does any of this matter? Is it worth the time and trouble to go to Sacramento and engage in what feels like a formulaic conversation?

After we got home, I posed my question to Kevin Liao, press secretary to Assembly Speaker Anthony Rendon. “So much of the work we do here in Sacramento can be abstract, dealing with billions of dollars in appropriations. Hearing real-life stories really helps with decision-making,” he explains. “The firsthand stories and experiences we hear stand out in our minds.”

I asked Jeff Cretan, the press secretary to Senator Scott Wiener how many groups come by in a year, but he couldn’t come up with a number. It seems no one keeps track. “Everyone in the office keeps his or her own calendar. No one compiles that information,” he remarked. “When bills are moving through the Senate, groups tend to come through.”

“Do the visits make a difference?” I inquired. “They absolutely make a difference. California is a big state. To hear from everyone is really important,” Jeff replied. “It’s also a core responsibility for anyone who is serving the public interest to hear from the public about what they actually think. At the end of the day, the citizen lobbyists are the people you represent. That’s an important voice to be factored in when you are making decisions.” 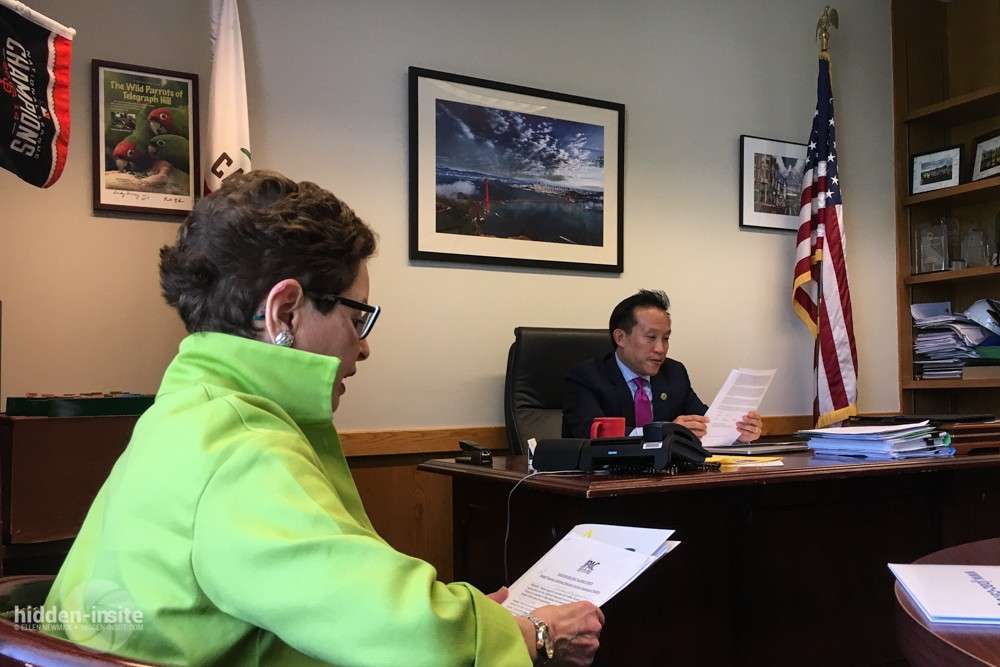 Jerilyn Gelt, the leader of my group, has done citizen lobbying on behalf of JPAC for at least seven Advocacy Days. “I remember my eighth-grade civics class, where they taught us, ‘if you don’t vote, you can’t complain.’ I think getting involved in the democratic process takes that one step further,” she says. “We have this opportunity to participate in the process. It’s interesting; it’s challenging, and it’s a real window to see how our government works. It’s a worthwhile experience for anyone who is the least bit interested in being engaged civically.”

It turns out that the doors to the State Capitol are open. If you have a cause you care about, take a trip to Sacramento and get involved. Your representatives and their staff are waiting to hear from you. 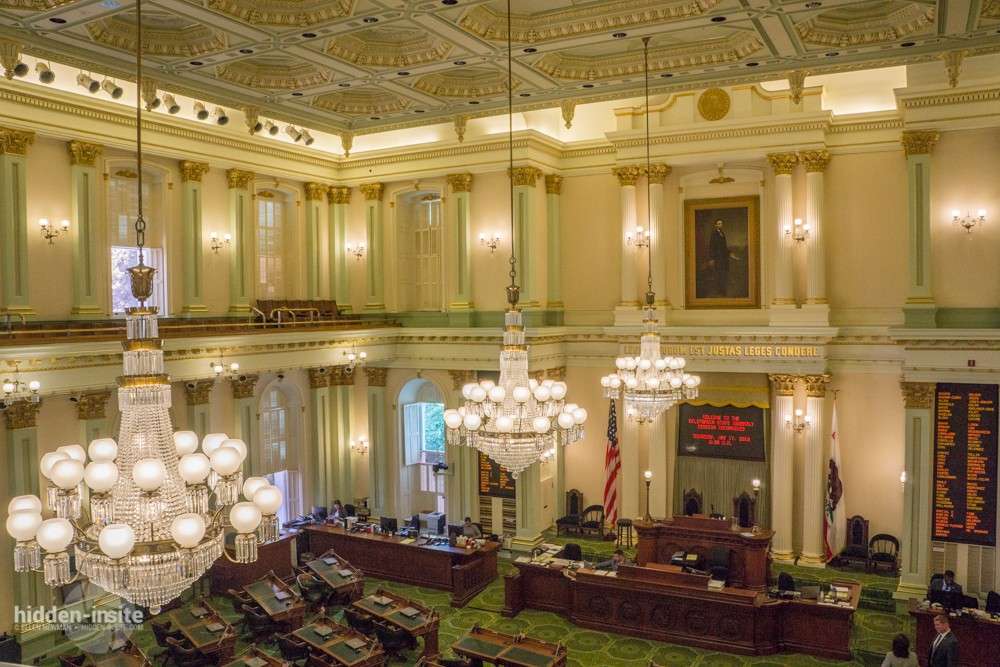 The California State Assembly at the end of a busy day.