Driving home Friday evening, June 15, 2018, I heard a BBC broadcast about the tragic fire at the Glasgow School of Art designed by Charles Rennie Mackintosh. Here we go again, I thought. One more thing to mourn.

News of the fire brought home one of the ironies of travel, something that brings so much pleasure. Once you’ve experienced more of the world, your heart can be touched when something happens to someone or something you met along the way. That’s how I felt when I heard about the fire.

When David and I were about to visit Scotland in 2016, two architect friends asked if we were planning to see any of the Charles Rennie Mackintosh exhibits in Glasgow. We hadn’t a clue. Who’s Charles Rennie Mackintosh? I did my usual pre-trip sleuthing and discovered that Mackintosh was an architect and artist, as well as an interior, furniture and textile designer, who worked from the 1890s through the 1920s. His professional life was relatively short, with his primary architectural work finished by 1910. Mackintosh continued his art intermittently until his death in 1928. 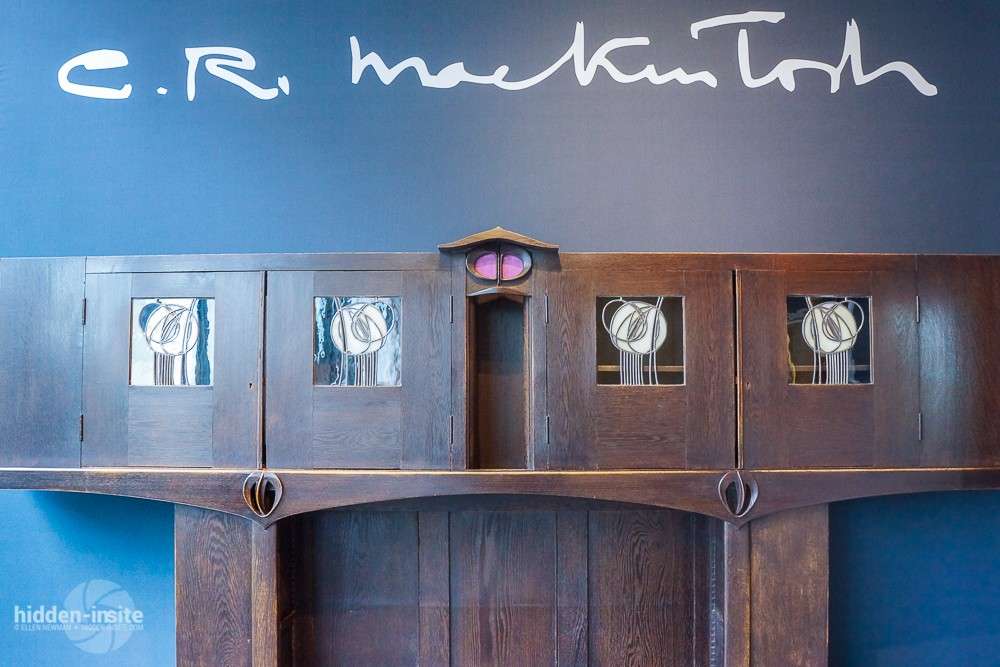 Mackintosh’s work reminded me of Frank Lloyd Wright’s designs, combing elements of Japanese simplicity with the whimsy of art nouveau. It had a lot in common with both Wright’s prairie-style designs and the California craftsman bungalows built by the Green brothers, who themselves drew inspiration from the British arts and crafts movement. The Glasgow School of Art building that went up in flames was considered Mackintosh’s masterpiece and the jewel in Glasgow’s architectural crown.

Glasgow flanks the River Clyde in western Scotland. Glaswegians have been building ships there since the 15th century, but the heyday of ship building in the early 1900s coincided with Mackintosh’s life and work. It is said that a fifth of all ships built worldwide, including the QE2, were built on the River Clyde. 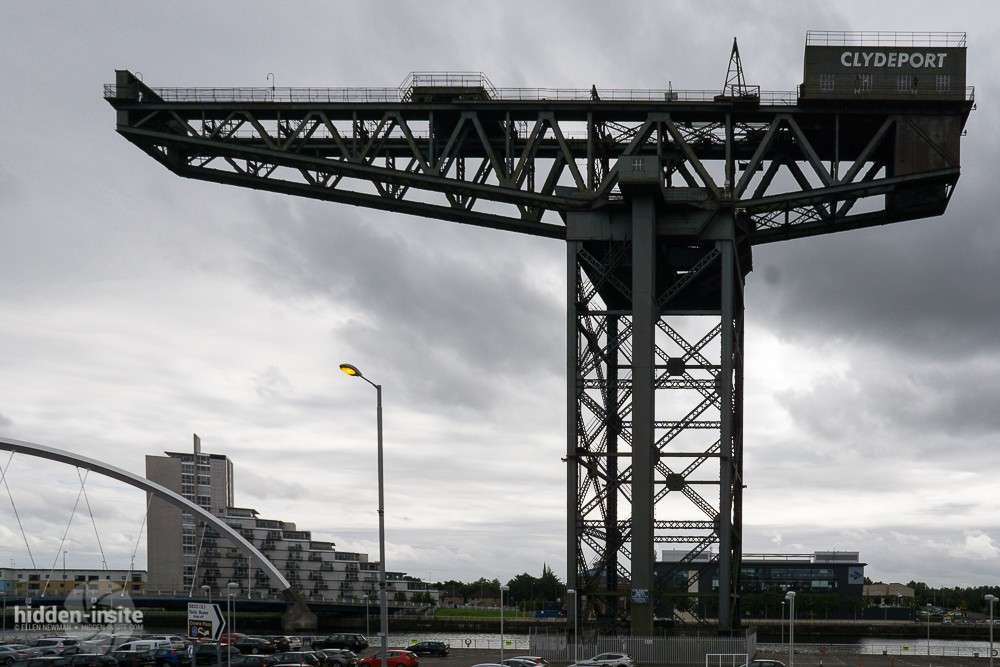 The vibrant, gritty city has been called the “second city of empire.” And Charles Rennie Mackintosh is considered Glasgow’s architect laureate, whose work has become synonymous with Glasgow in the way that Antoni Gaudi symbolizes Barcelona and Frank Lloyd Wright recalls Chicago. 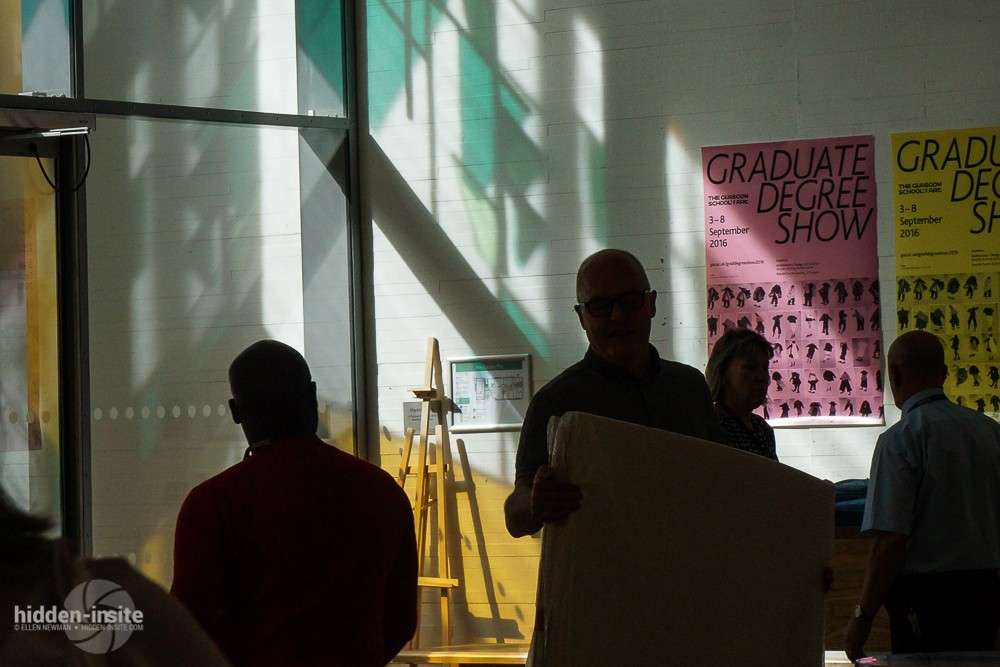 To join one of the student-led tours at the School of Art, we walked past pubs, shops, buildings with elaborate iron gates, and civic art old and new. The tour met in the school’s modern Reid Building across from the 100-year-old masterwork destroyed in last week’s blaze. 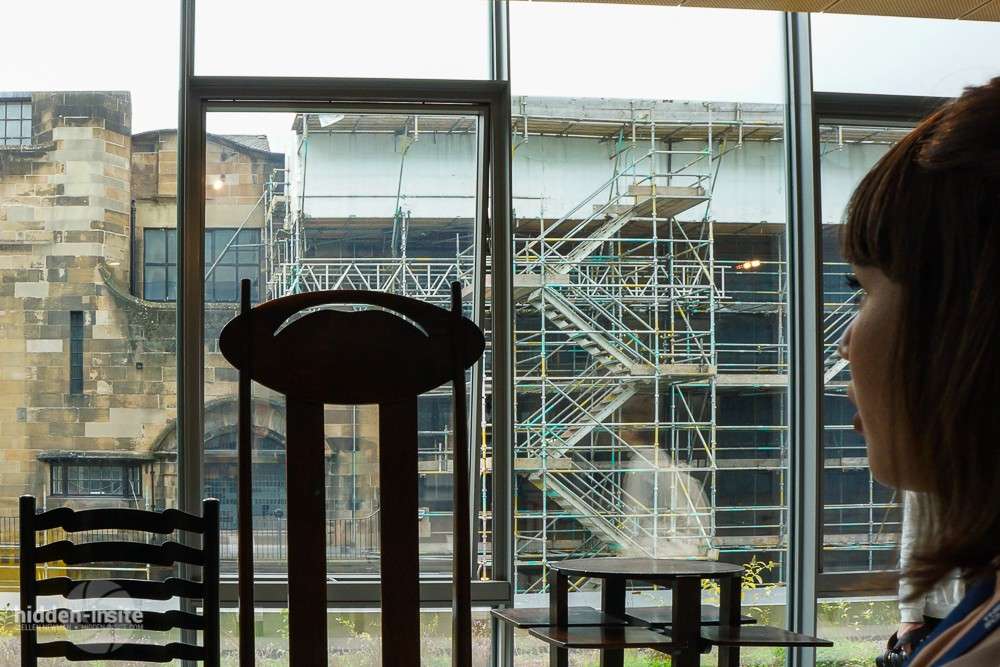 Sadly, the original building was clad in scaffolding and not open to the public because construction to repair damage from a massive fire in 2014 was still under way. We could only glance longingly across the street and look at a model of the acclaimed building, which gave us a hint of its beautiful interiors and famed library. After the inferno this June, it seems unlikely that the building will be able to be restored. 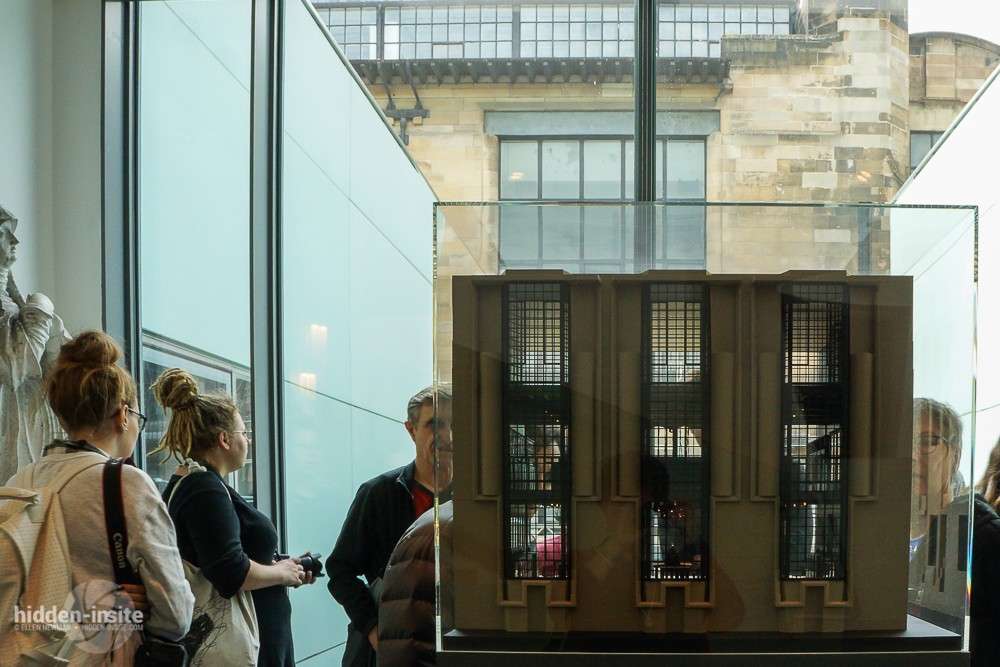 Instead we had a good look at some of Mackintosh’s marvelous furniture, from a bright yellow settee with purple upholstery, to high-backed chairs, tables that would be right at home in a Berkeley bungalow and a massive cabinet with artful metal panels designed by his wife, artist Margaret Mackintosh. 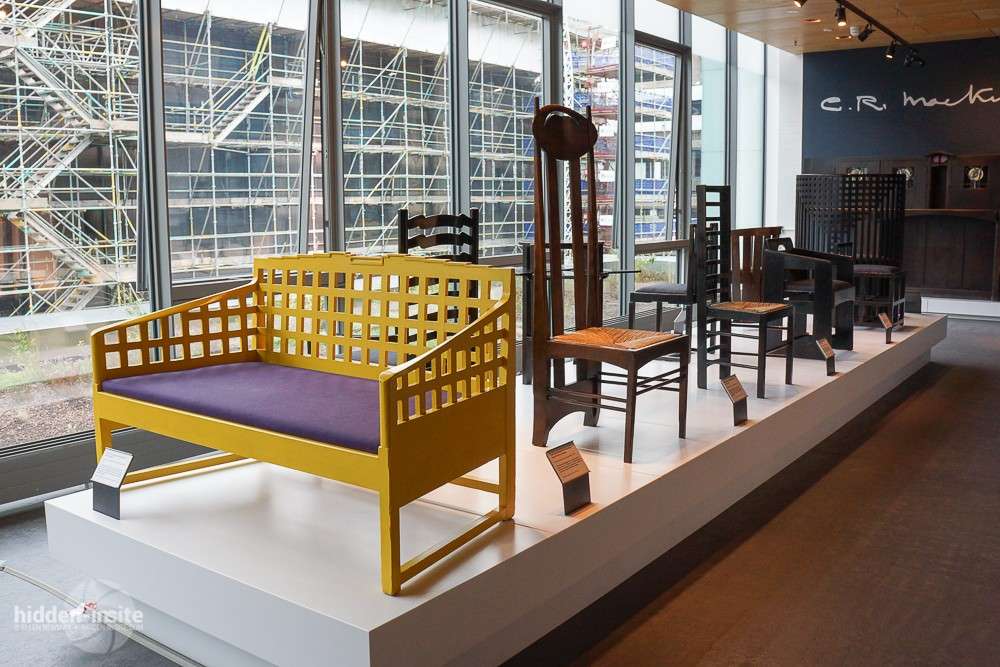 Afterwards a Glasgow double-deck tour bus took us around by the river, past a massive shipbuilding crane and the ultra-modern Riverside Museum designed by Zaha Hadid to the University of Glasgow, where the couple’s flat has been reproduced in the Hunterian Art Gallery. I was ready to move in. The walls were white, the windows touched with whimsical stained glass, and lighting fixtures in every room made me smile. 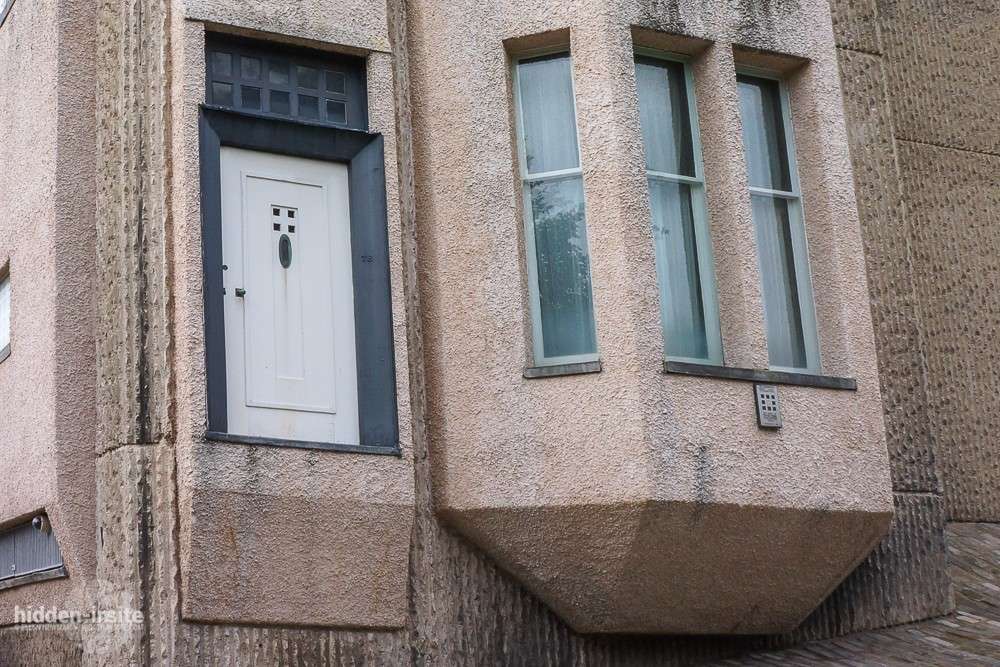 But no photos allowed, except the exterior, where you can see a few Mackintosh touches in the door and the transom. If you look carefully, you can see that the front door is above street level. That’s because the flat was transplanted to the museum interior, and the interior and exterior elevations don’t line up.

The next best thing to living in a Mackintosh-designed flat is having breakfast at the Willow Tea Rooms on Buchanan Street, which was inspired by and modeled on the Ingram Street Tea Rooms Mackintosh designed for Kate Cranston in the early 1900s. 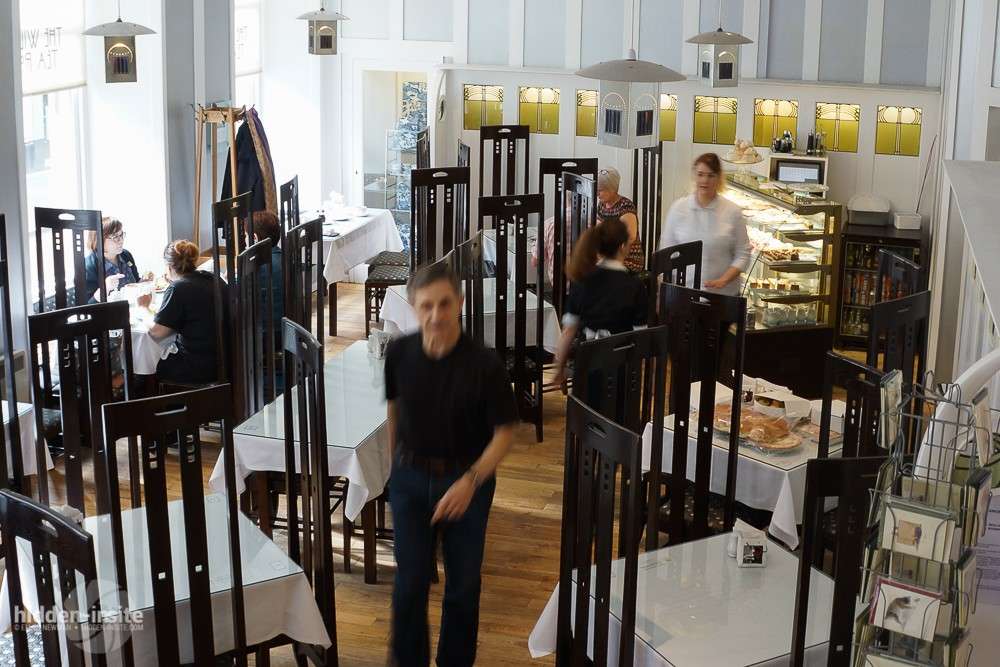 We ate in the delightful White Dining Room with its high-backed chairs. Before we left, we walked upstairs and explored the exotic Chinese (Blue) Room. 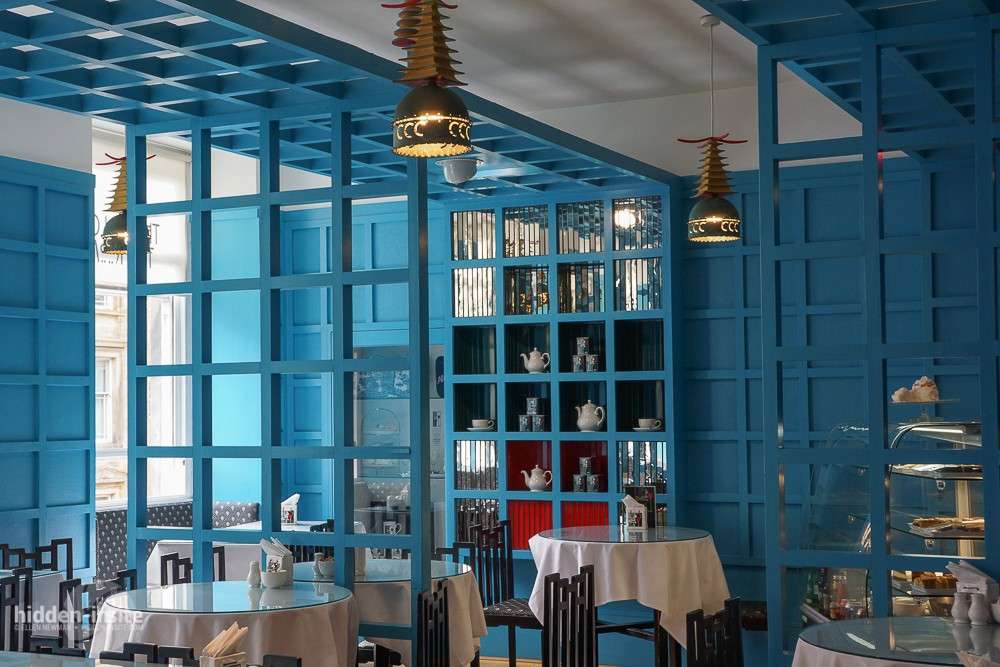 It seems that the entire tea room craze started in Glasgow as part of the temperance movement. The first tea room was created by tea merchant Stuart Cranston as an alternative to pubs. His sister Catherine (Kate) took the idea even further, opening four Mackintosh-designed tea rooms for sophisticated ladies to join their friends for tea and treats. The menu at the Willow Tea Rooms is a combination of classic tea room fare and modern adaptations like avocado toast. 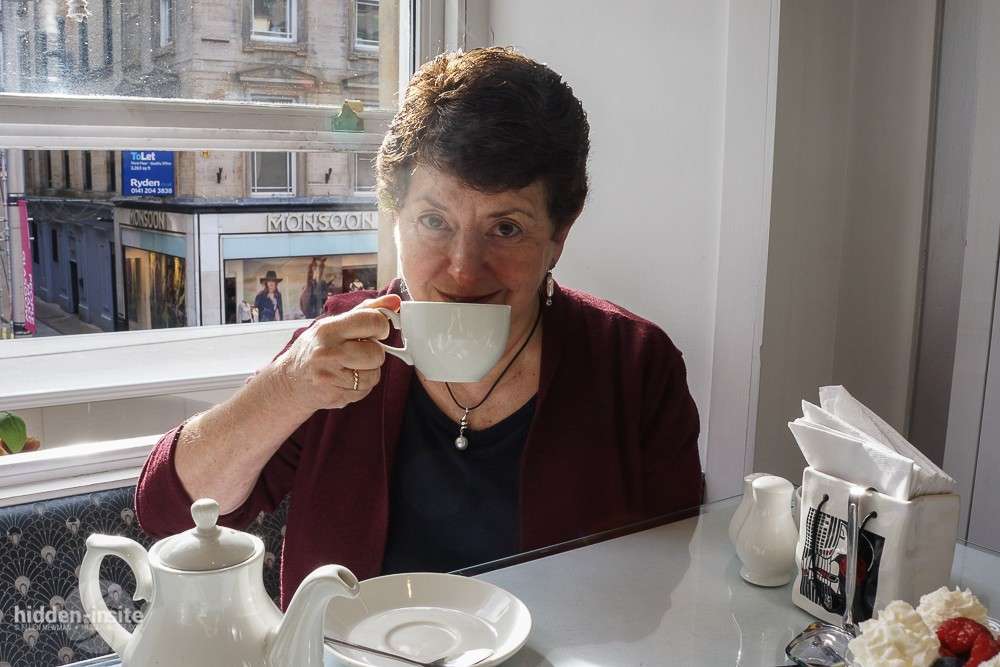 The charming breakfast stop was our last in Glasgow, a city well worth exploring in greater depth than we had time to do. But even with our short trip, we felt connected to Charles Rennie Mackintosh and his work. We were truly saddened to hear that his masterpiece, The Glasgow Art School is gone, probably forever.

Is there any place you’ve visited that is now gone, perhaps lost forever? Let us know in comments so we can compare notes.