The headlines are daunting. Let’s gut the Endangered Species Act. Let’s relax regulations on methane leaking from oil and gas wells. Let’s support dirty old coal instead of clean alternatives. Let’s enhance profits for the one percent instead of saving lives and our planet.

As of early September, 2018 – usually the beginning of California’s fire season –more than 6,153 fires have burned an area of 1,485,353 acres across the state, according to the California Department of Forestry and Fire Protection. And that doesn’t count fires in Oregon, Washington and British Columbia. When we flew to Boston over Labor Day, we could see the effects of western fires in the air in the eastern seaboard.

And, as I write, Hurricane Florence is drowning the Carolinas. The effects of human-caused climate change are all around us. The evidence has moved from dry scientific projections to phenomena that we can see, feel, taste and smell. Unless you’re hiding in the Oval Office. 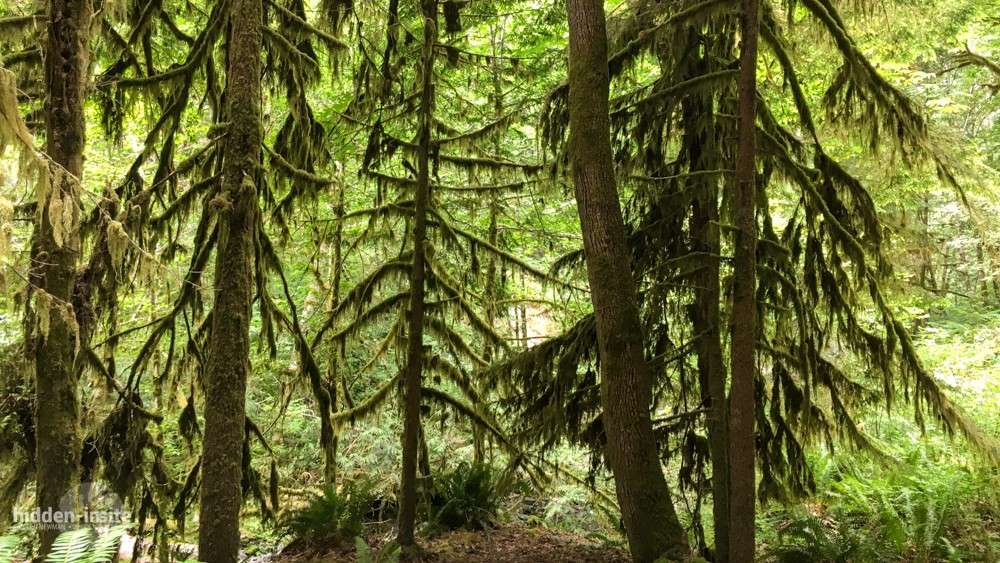 It’s enough to make me want to rush back to the Olympic Peninsula to soak in the pristine old growth forests. But that’s another version of putting my head in the sand. Because even there, maybe especially there, the environmental conflict facing the nation is palpable and longstanding. 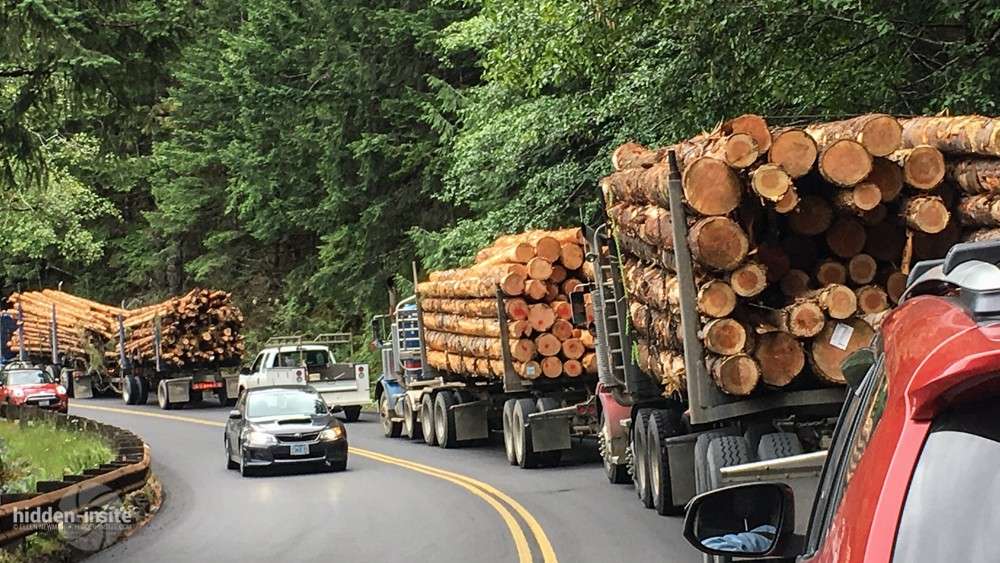 Do you log or do you conserve pristine forests? Once you discover that fossil fuels are polluting the environment, affecting people’s health, heating the planet, do you switch to less polluting renewables? How do you balance the competing needs of commerce with conservation

The Olympic Peninsula has always teetered on the fulcrum of wealth (logging) vs. beauty (now expressed economically as tourism). Much of the Peninsula’s land is administered by the U.S. Forest Service, which itself is part of the Department of Agriculture. Agriculture is all about growing – and harvesting – crops. The crop in the Pacific Northwest is lumber. If you live in a wood frame house, chances are it’s built with Douglas fir, one of the dominant trees in the Northwest. And, if you still use paper, it’s likely to be milled from western hemlock. Or at least it used to be.

I can still remember the acrid smell of sulfur from the paper pulp mills when I traveled to Washington and British Columbia as a child. We drove past miles and miles of clear-cut forests. Nothing to see but gray stumps where forests once stood. Why were we here, I wondered? In those days, they didn’t even pretend to cover up the logging by leaving a modesty curtain of trees to hide the mess. 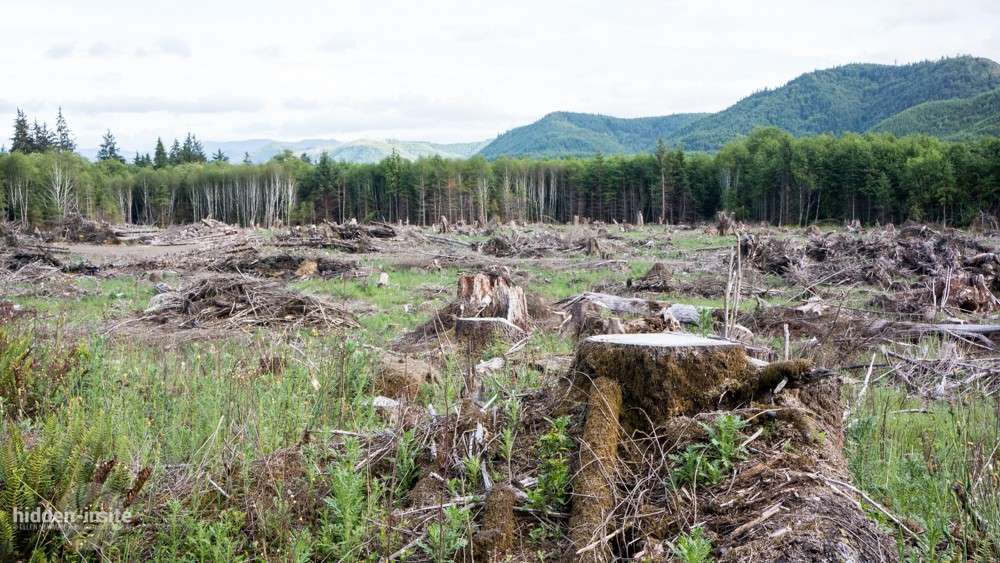 What I saw was a thriving industry that started shortly after Lewis and Clark wrote in their journals about the “great quantities of excellent timber” in the Pacific Northwest. The lumber boom persisted through the building of the railroads and into the early twentieth century with the creation of the army’s Spruce Production Division that sent timber east to fight World War I. More than 30,000 troops were stationed in 200 logging camps as part of that effort. And the post-World War II housing boom – all those suburban houses that ex-GIs bought with their VA loans – depended on wood from the forests, which the U.S. Forest Service was happy to provide. 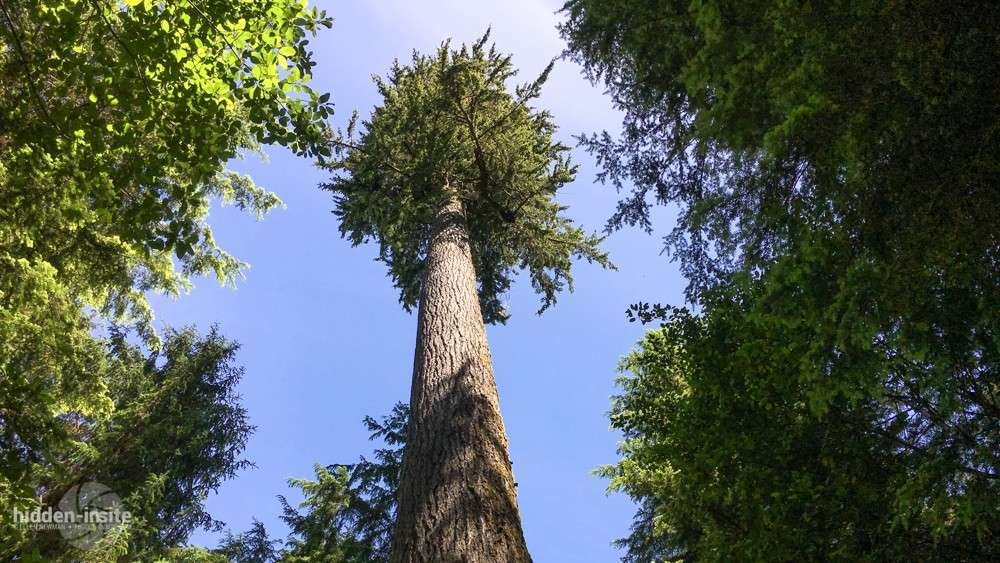 But then the spotted owl flapped its way into the debate. In 1990 the Endangered Species Act was used to protect the old growth habitat of the northern spotted owl. Once the judge in the case issued his ruling, 11.6 million acres of federal lands outside the national parks were declared critical habitat and off limits to logging. More than 50 lumber mills closed in one year alone. The timber industry on the Olympic Peninsula declined 90 percent in a decade. Resentment was high. Signs and t-shirts in the area said, “Hug a logger; shoot an owl.” Ouch!

I had never given much thought to the plight of the loggers until we visited the Forks Timber Museum. It was a wet and drippy rainforest day. Slightly damp from hiking in the Hoh Rainforest, we stopped in Forks, the major town on the west coast of the Olympic Peninsula. Known as the logging capital of the world in the 1970s, Forks recently became something of a celebrity town as the setting for Twilight.

But that’s not the story the Forks Timber Museum tells. Using what were once everyday objects – a typical kitchen table, saws and other logging implements, plus historic photos and a glossary of logger lingo – it asks visitors to imagine themselves as homesteaders or loggers on the land we’d been exploring just outside the door. Built in log-cabin style by the local high school carpentry class of 1989, it is a small but passionate homage to a way of life that’s fading into the Olympic mist. 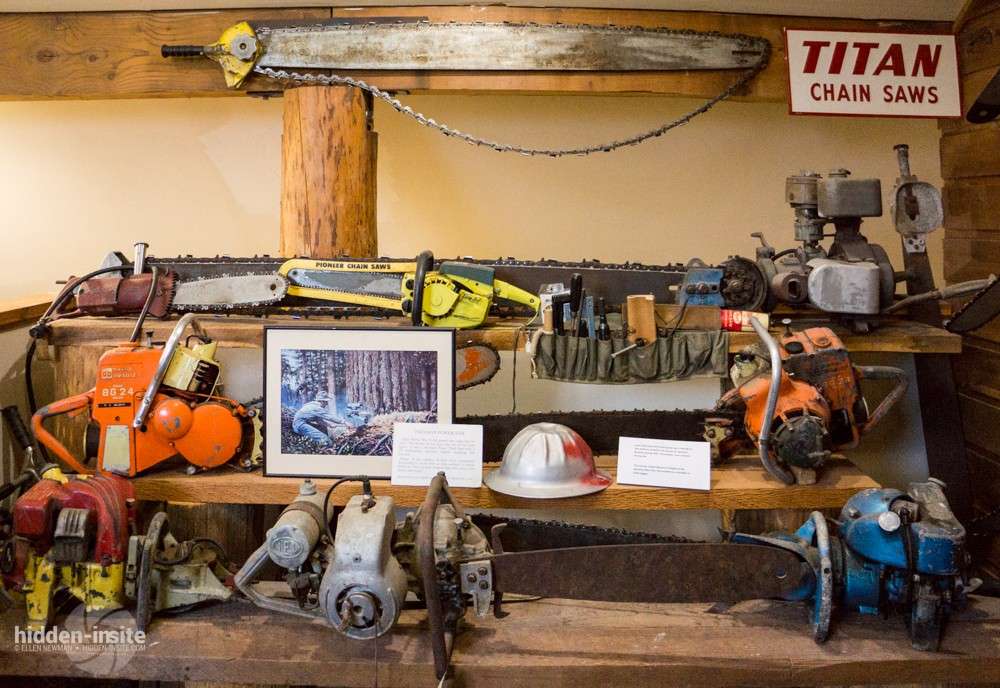 My college history text spent about five minutes discussing homesteading, but it was a daunting undertaking. Enacted during the Civil War, the Homestead Act of 1862 encouraged people to move west and settle. The catch? Settlers could stake a claim to 160 acres of land, but they had five years to clear half the land, build a home and stable, plant an orchard and provide education for their children. 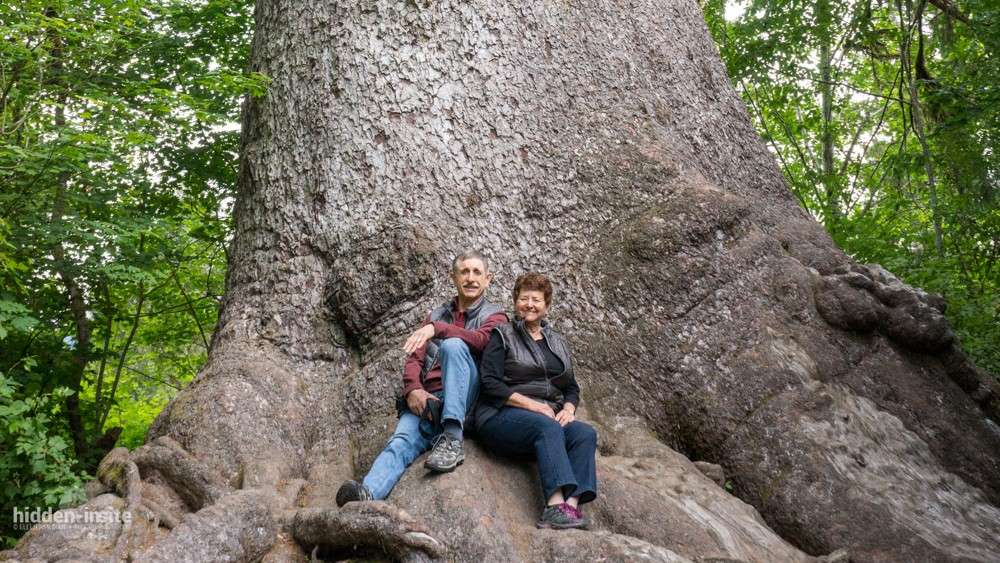 Check out the size of the trees they had to clear! It was no easy task. The goal, of course, was to create farms. But what grows here? Trees, of course. And the future lumber industry was born – and thrived. People depended on it for their jobs and way of life.

Much has changed since my early visits as a child during the heyday of logging. Signs along Highway 101 tout the sustainability of the forests as stumps are cleared and trees replanted. The air is certainly cleaner. 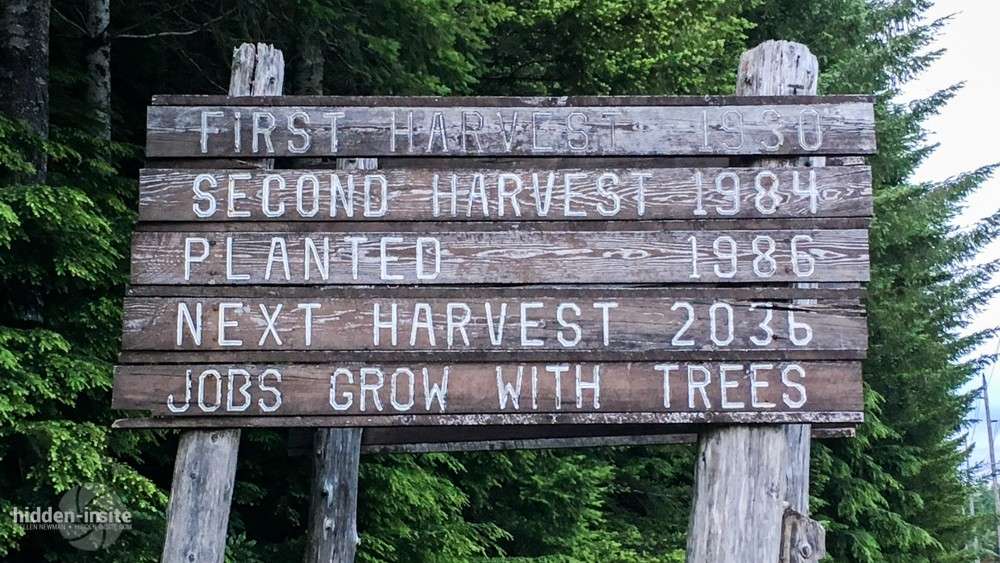 Although lumber is still one of the area’s economic mainstays, anger toward the environmental movement has not entirely abated. A recent Congressional proposal to protect the rivers of the Olympic Peninsula is meeting resistance from prominent old line homesteading families and other interests. Fearful that they will lose fishing rights as well as logging acreage, they are opposing the Wild Olympics Wilderness & Wild and Scenic Rivers Act introduced by Washington’s Senator Patty Murray. 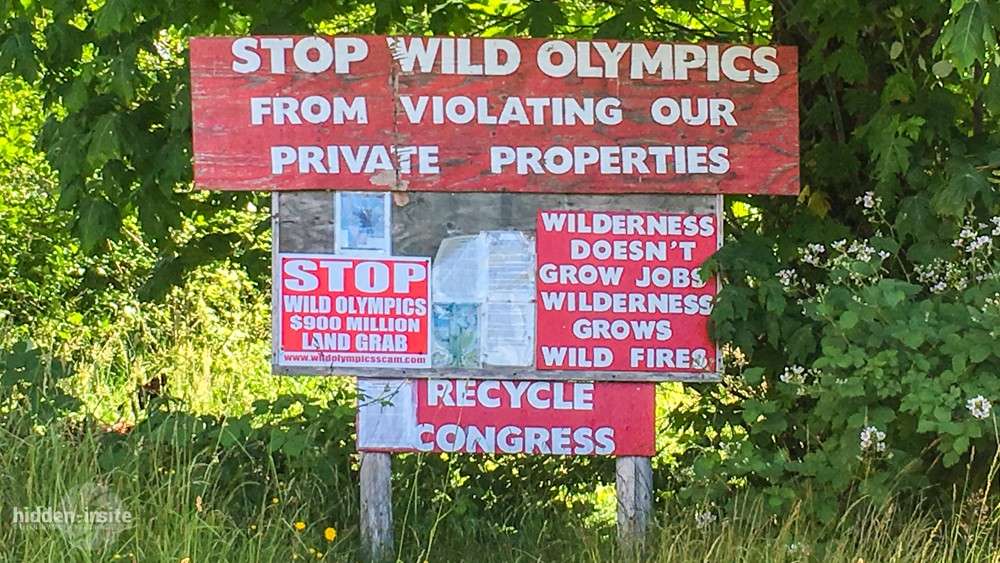 So the story continues with local variations wherever you go. People want – and deserve – jobs. Logging here, mining there. The big question is how do you protect people’s livelihoods as well as the environment? I don’t have the answer, but I do know that someone has to figure it out. And fast.

Remember, this isn’t an abstract discussion. Your voice matters and your vote counts. 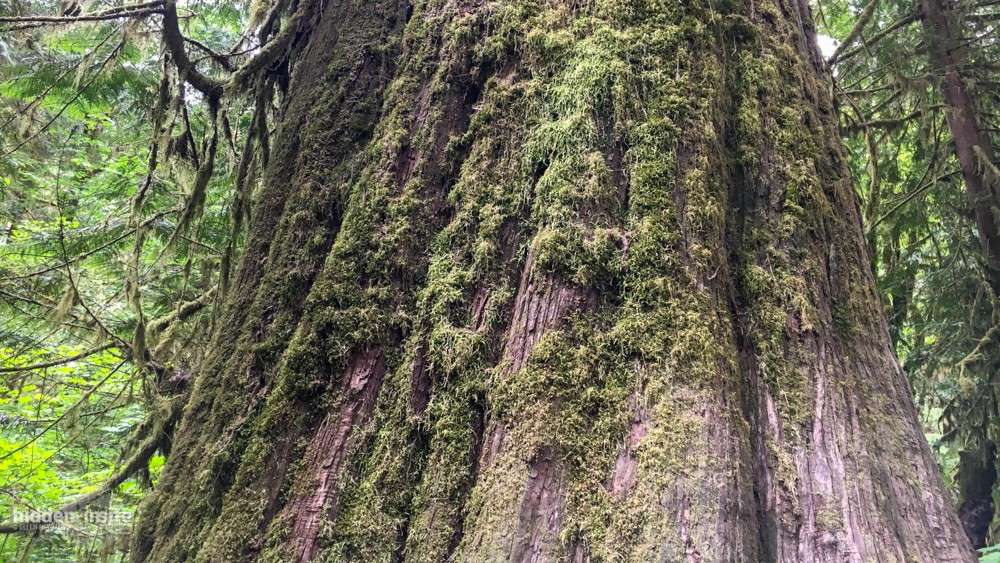