Forest Bathing on the Olympic Peninsula

Forest bathing is having a moment, and I desperately needed a bath. I wanted to bathe in a sea of green. I was not attracted to blues from the ocean or sky – too cool – and the gold of California hills sparked a crackly parched sensation, even in spring. And restful gray, the low-information color of choice for tasteful décor? Located on the western edge of San Francisco, I live in a tunnel of gray much of the year. No thank you. I wanted to marinate in green. 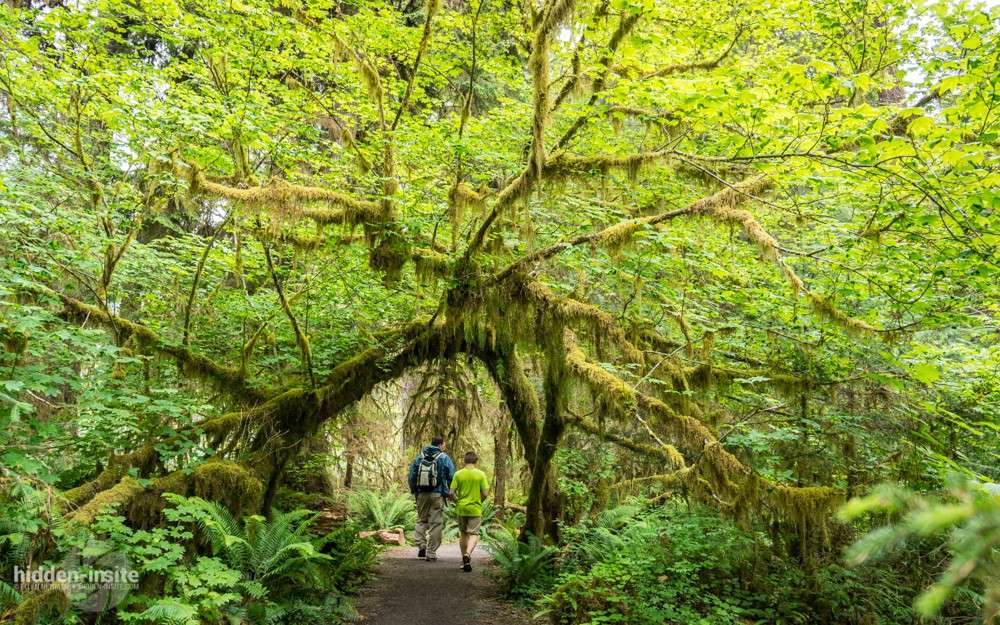 I’m not sure where the impulse came from, but two articles definitely nudged it along. Peggy Orenstein’s description of her walk from temple to temple in Japan’s Kumano Kodo in Afar was intriguing, but our foreign trip this year is back to India. Finding green needed to be closer to home, but more than a day trip. Then I read “The Noise Within,” Meghan O’Rourke’s description of her trip to the Hoh Rainforest on the Olympic Peninsula in T, The New York Times Style Magazine. She was looking for quiet while I was looking for green, but I knew I could find greens of many hues there. When David graduated from law school, we spent a glorious few days camping and exploring the Olympic Peninsula. It was time to go back. 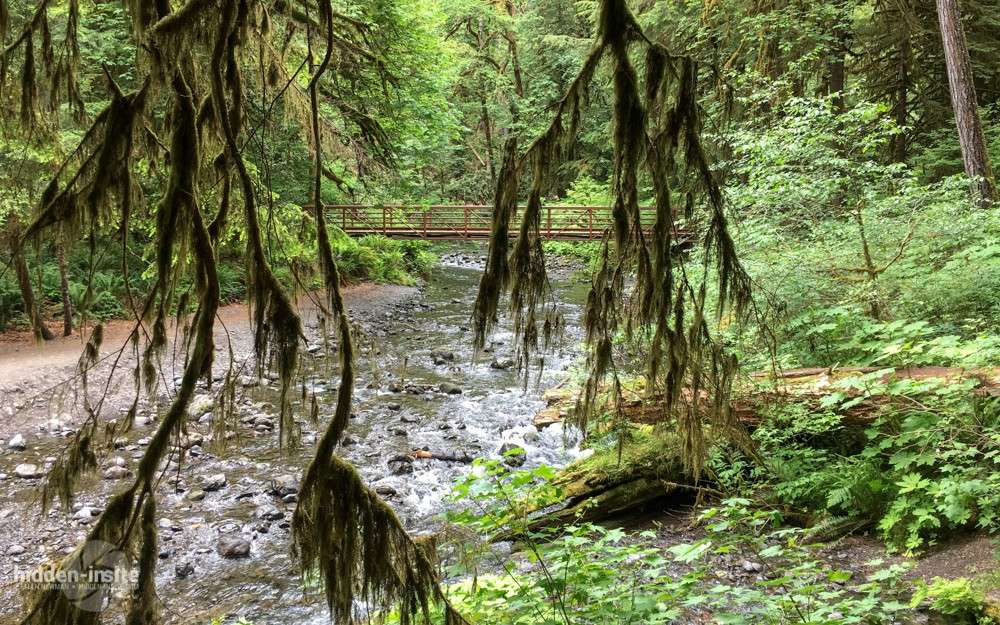 I met forest bathing a couple of years ago at a writers retreat in Point Reyes near San Francisco. A dozen of us walked slowly along a trail, inhaling the resin-y aroma of pine trees in the sun. Then we were asked to find a tree to bond with. Self-consciously we spread out and found our trees. I think I bonded more with the sunshine than the tree.

This spring too much computer time made the idea of forest bathing really attractive. Surrendering to the desire to drink in the deep greens of the rainforest, we made reservations for Seattle and the Olympic Peninsula. Shortly before leaving for Washington, the book, Forest Bathing by Dr. Qing Li, chairman of the Japanese Society for Forest Medicine, showed up at my local bookstore. It became our forest-bathing guide. 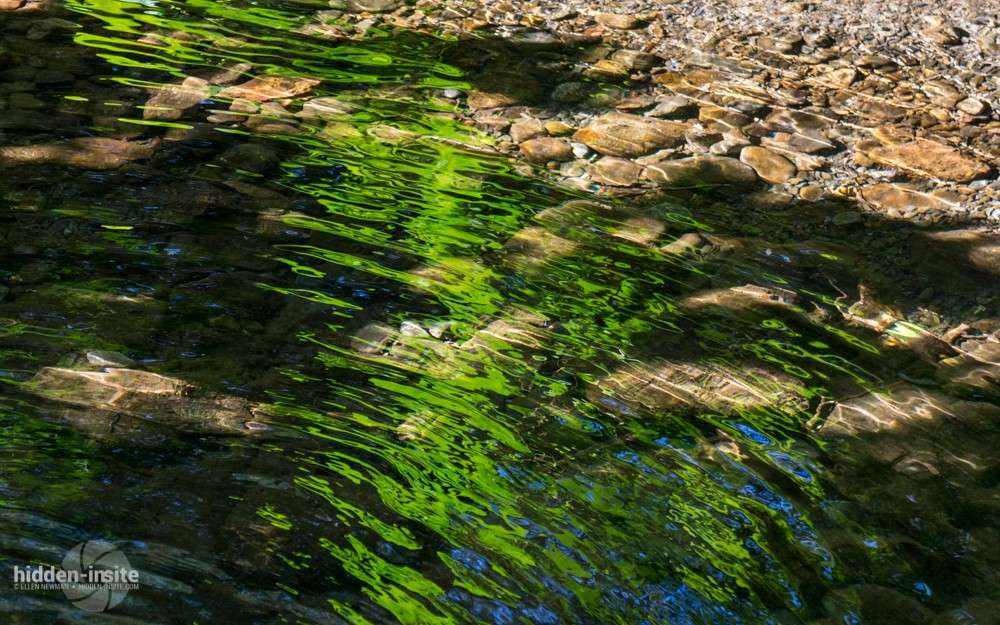 Known as shinrin-yoko in Japan, where the concept sprouted in 1982, forest bathing is the subject of books, articles, academic studies, medical research and accreditation programs for group leaders and guides. It allegedly takes feeling good in nature to a new level, boosting the immune system, lowering blood pressure and promoting healing. The trick is to slow down and pay particular attention to your senses, noting what you hear, taste and smell in addition to what you see, our dominant sense. The temperate rain forests of the Olympic Peninsula seemed like the perfect place to test the theory. 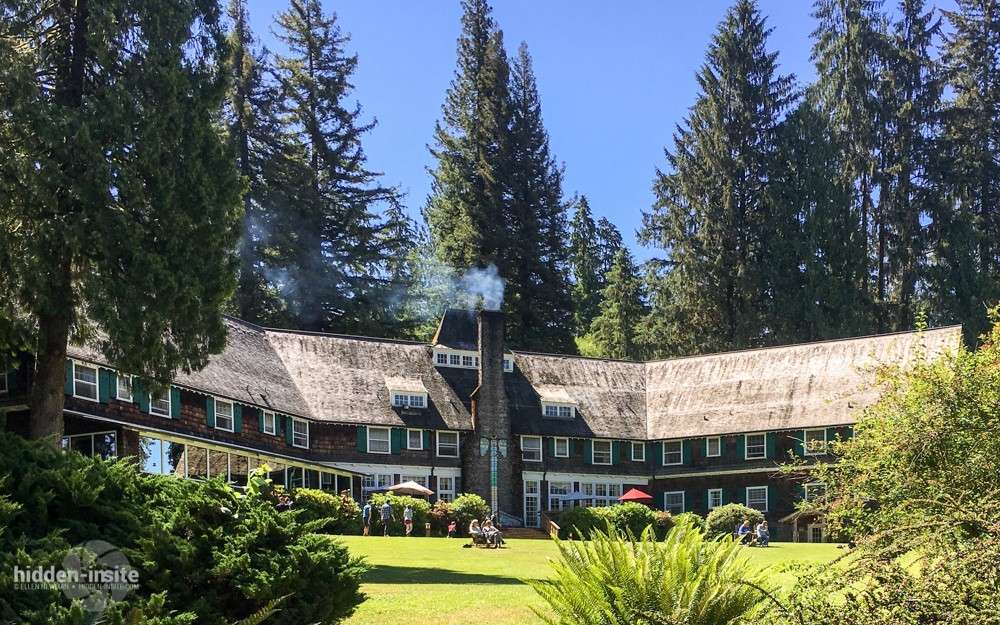 Primeval rainforests of the Olympic Peninsula

Averaging 12 feet of rain a year – that’s feet, not inches – the western river valleys that emerge from the peaks in the center of Washington’s Olympic Peninsula provide the ideal habitat for some of the world’s oldest and largest trees. 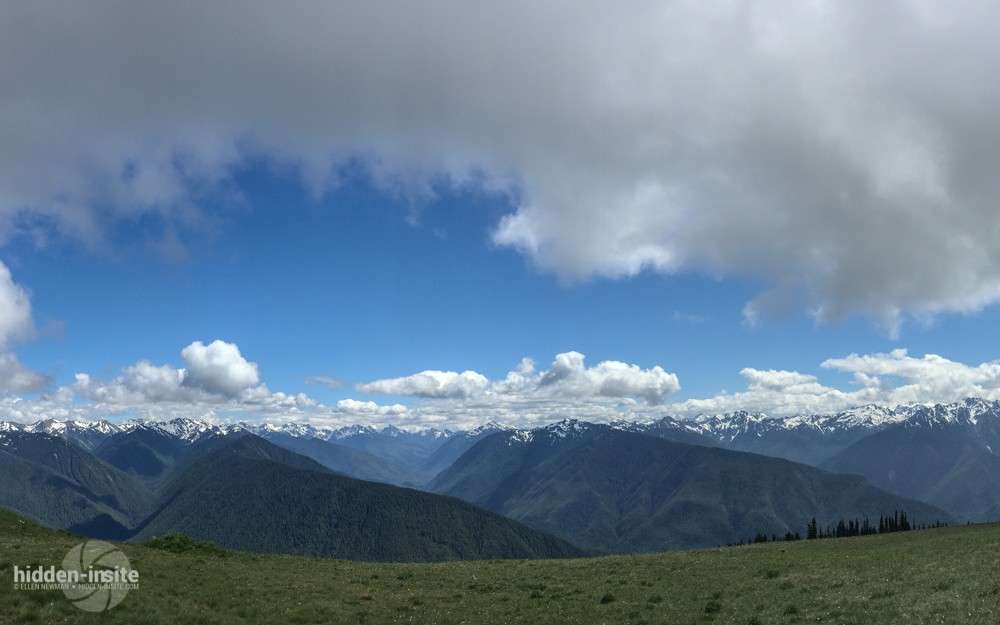 Mixed-growth forests of Douglas fir, Sitka spruce, western red cedar and western hemlock share space with bigleaf maple, red alder and black cottonwood. Salmonberry – with its yummy golden fruit – and deep purple huckleberry fill the spaces in between. Sword ferns as high as our shoulders, mosses and lichens cram into leftover niches. Just stepping onto one of the trails offers a deep encounter with more shades of green than Crayola ever named. 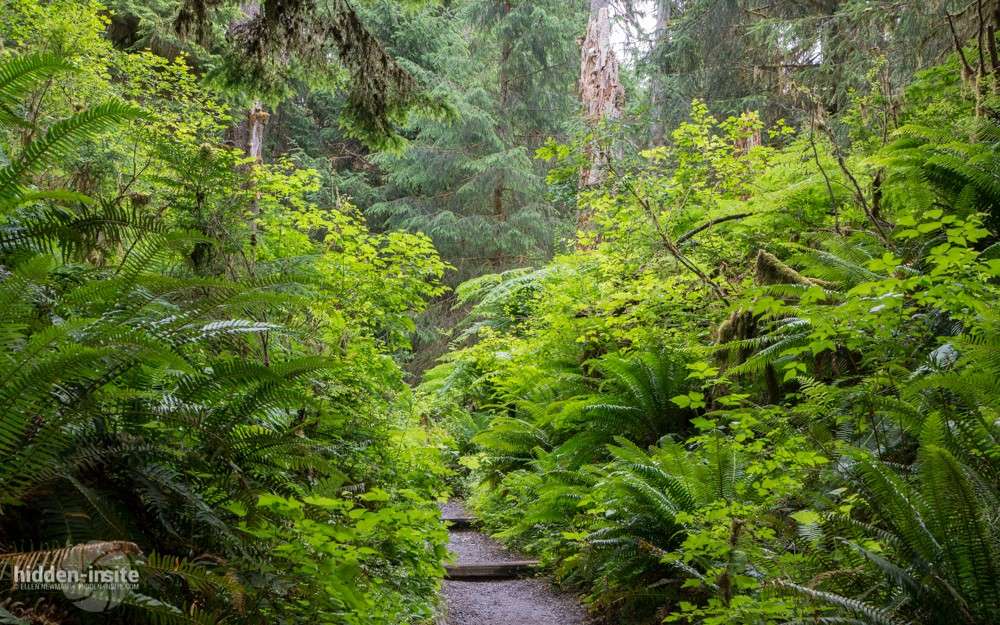 In those first few moments I could feel the corners of my mouth inch up into a spontaneous smile. My shoulders relaxed and my breathing slowed. It was better than yoga … and much prettier. Infusers in every corner of a studio couldn’t possibly approximate the fresh scents of the moist forest air.

I stepped into wonderland. My eyes widened, trying to take it all in. I’ve been in vast places before, on the tops of mountains, looking out over desert terrains, on seaside cliffs watching the ocean roar. But this was different. Rather than looking out over something spectacular, I was engulfed inside it. My pores sucked up the green, slaking my thirst. 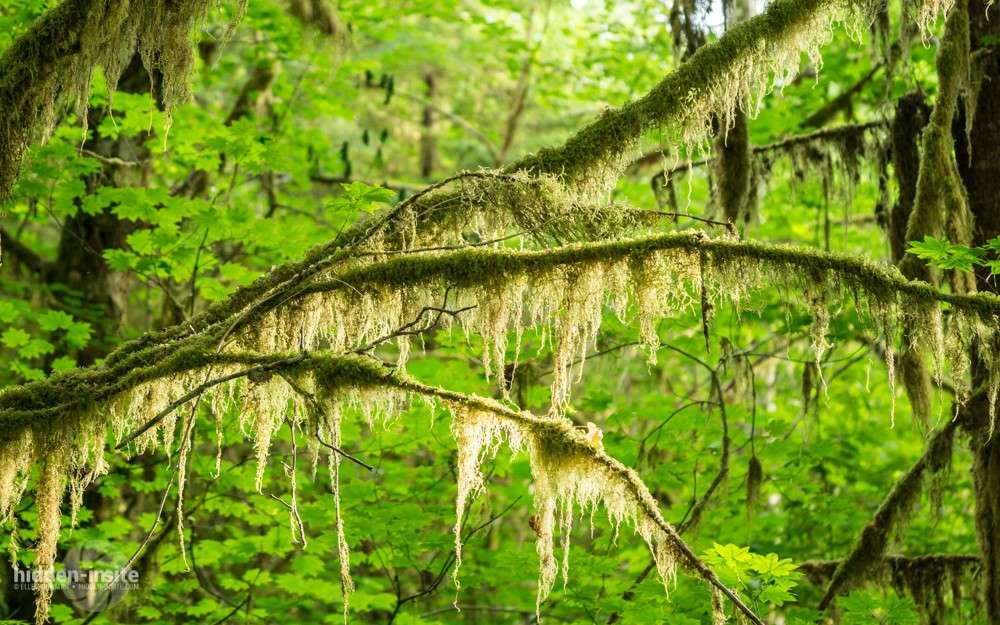 Patterns of light and dark created a patchwork of green, from the luminous sunlit glow of the bigleaf maples to the pale gray-green streamers of lichen hanging from the hemlocks. Curtains of moss with tendrils curled like ringlets weighed down maple branches. They attached themselves to every available surface from the tops of snags to old bird feeders and even a vintage phone booth. I wouldn’t be surprised if the original Sasquatch was a dead snag covered with so much moss that it resembled a hairy beast. 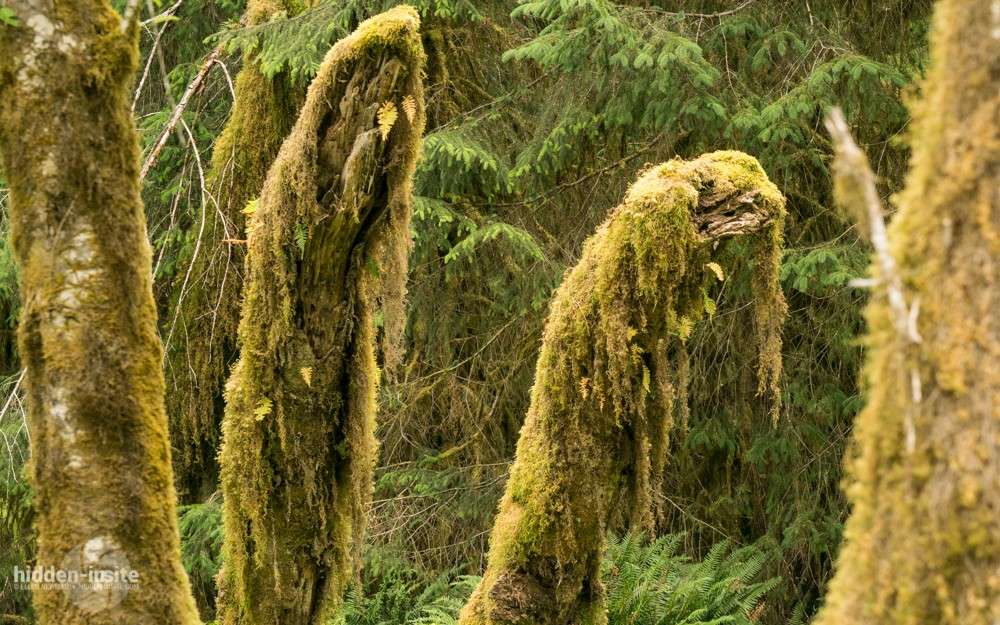 The old growth forest, with trees hundreds of years old, is home to many named giants. To see the tops of the largest trees, I practically had to do a sun salutation, leaning back to look up. But the tiny flowers on the forest floor were also a marvel. The rainforest feels vast but intimate at the same time, with the constant contrast between large and small, near and far, vying for attention. 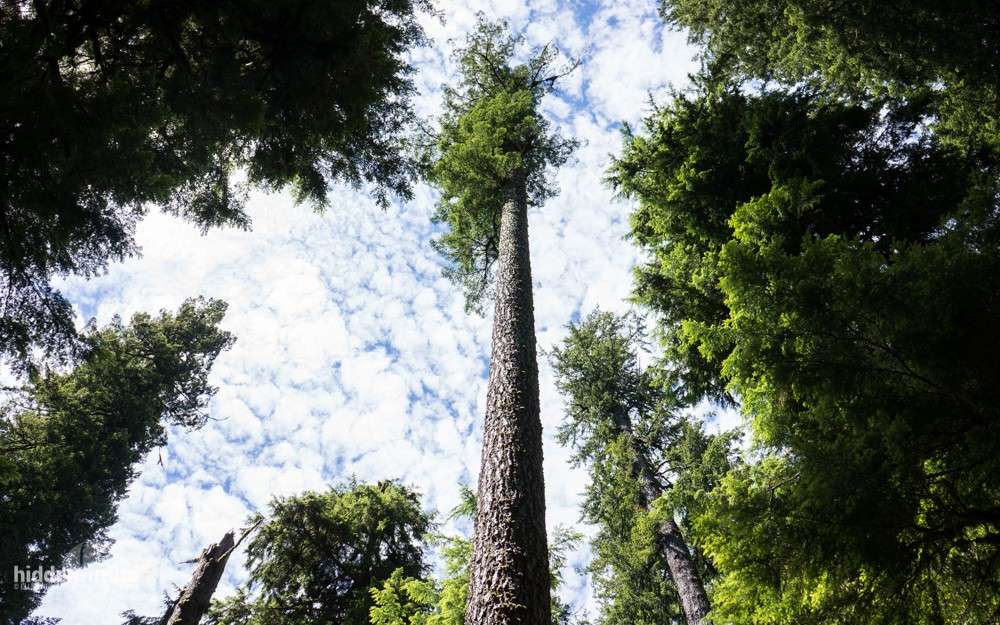 The density of the forest and the water content of the air tamp down sounds, softening what we heard. The rush of water is ever present, from the roar of waterfalls to riffles in the rivers and the musical drip of rivulets seeping from springs. We heard melodic birdcalls and the hum of buzzing insects, along with hushed oohs and aahs of others along the trails.

Walking in the woods or forest bathing? 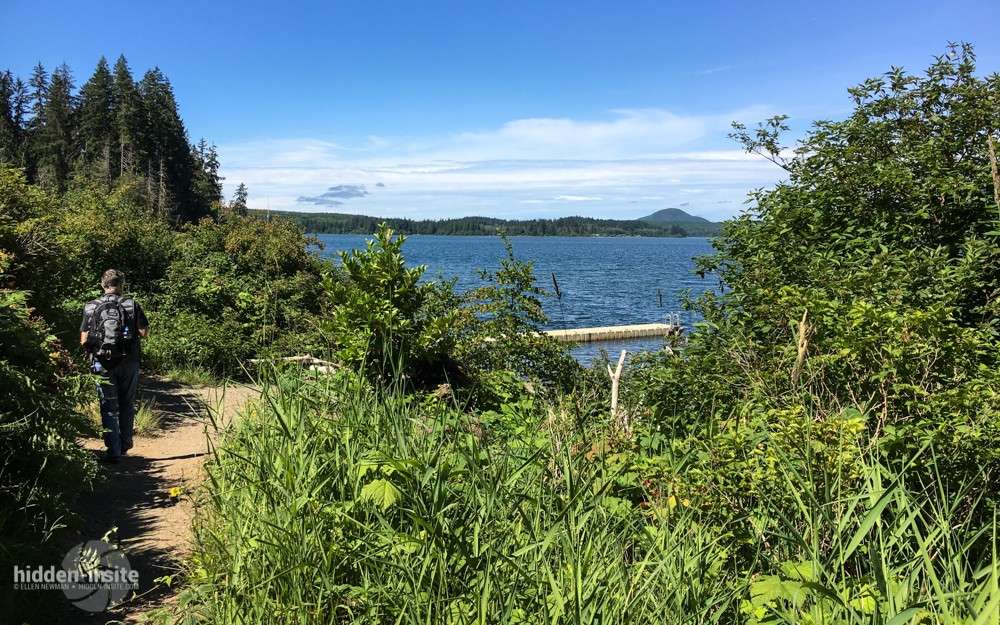 We explored the rainforest trails along Lake Quinault and the Quinault River, hiked the Spruce Trail in the Hoh Rainforest, and made our way up to the falls on the Sol Duc River. Each place was more beautiful than the last. Each spot impressed us with the density of life in the rainforest, with new plants occupying every available niche. Fallen trees became nursemaids to new growth, and epiphytes clung to nooks and crannies. I was drinking it all up. 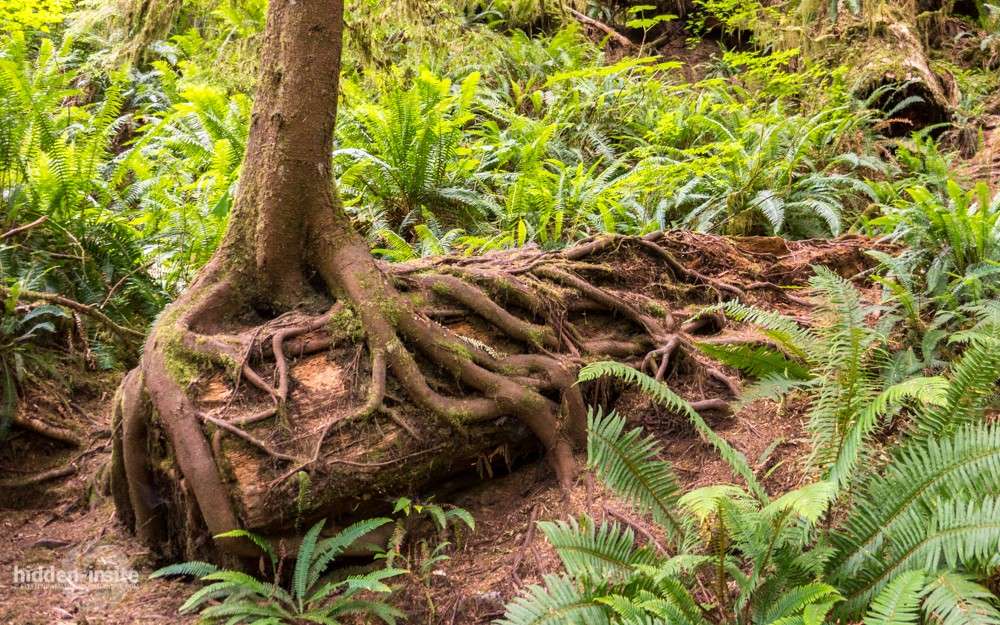 But was I forest bathing? I breathed deeply and slowed down, as Dr. Li prescribed. I sniffed the air. I caressed the mosses, experiencing their furry elasticity. I tried to identify the larger trees by the texture of their bark. I inhaled a sweet aroma, part vanilla and slightly fruity, that we never identified. Perhaps it was those tiny white flowers. 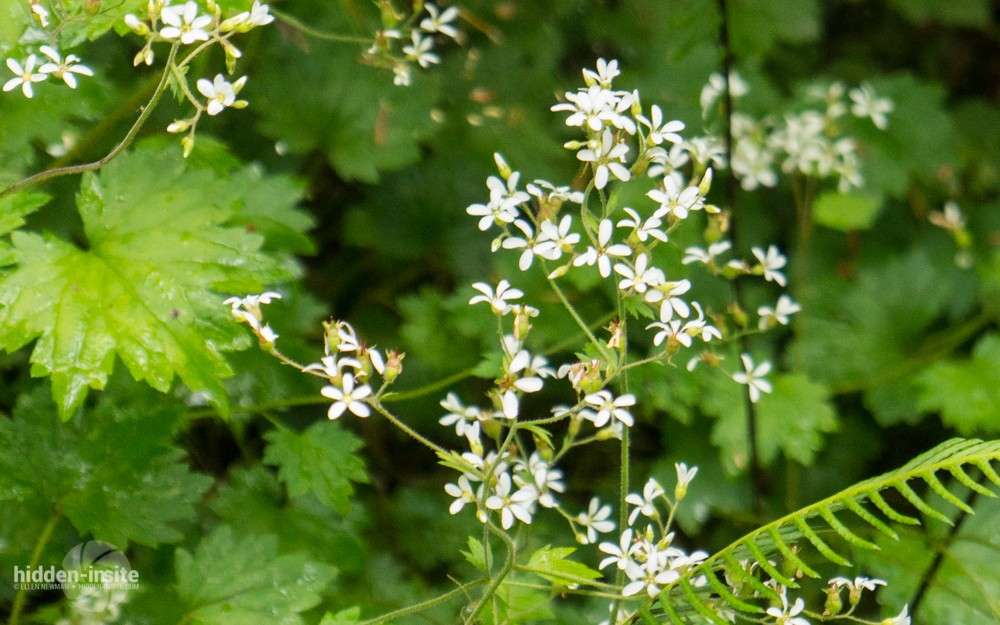 But I couldn’t quite follow the rules. Except for lunch, we didn’t really stop for 20 minutes or a half hour to revel in the forest. It was hard to let go of goals. David and I have been hikers from our earliest days together. It was more natural for us to trek to the bridge, scramble to the waterfall or follow the trail back to the lodge than to sit and breathe. And there was no way I was going to leave the camera behind, even on the last day. Of course I had enough pictures … but … but … I might miss a great one. I couldn’t take that risk. 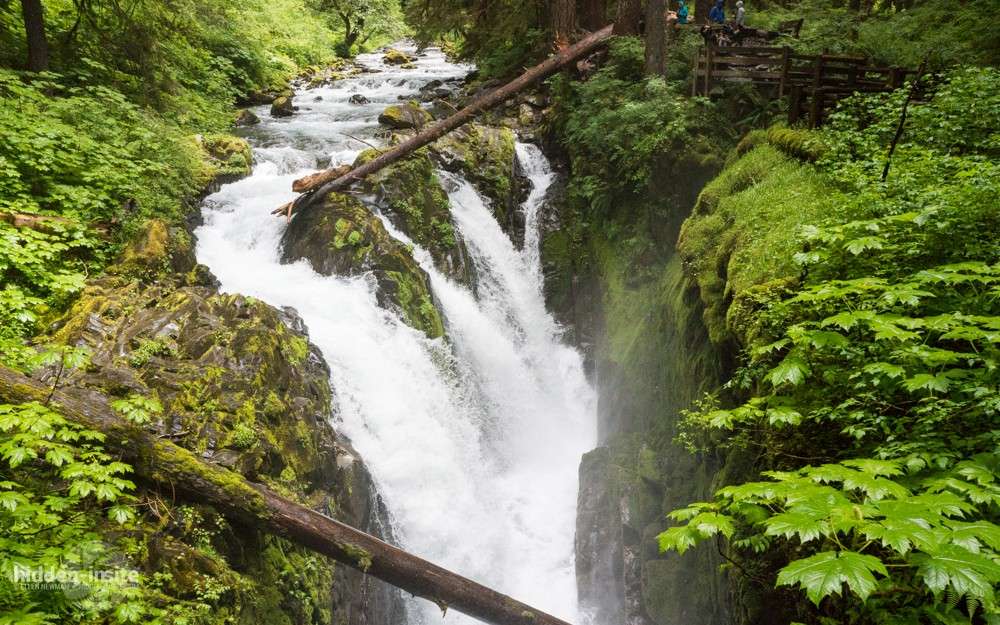 Following Dr. Li’s suggestions, I did try a few new things. I took my usual morning yoga stretches out to the damp deck of our vacation rental on the banks of the Sol Duc River, where I looked up to the sky instead of the ceiling as I reached back to salute the day. I tried walking barefoot under the maple tree on the property to see how it felt to be barefoot in the woods. The ground under the tree was spongy with layers of mosses that cradled my feet like a plush living carpet. But no, I wouldn’t try that on the trail in the national park. 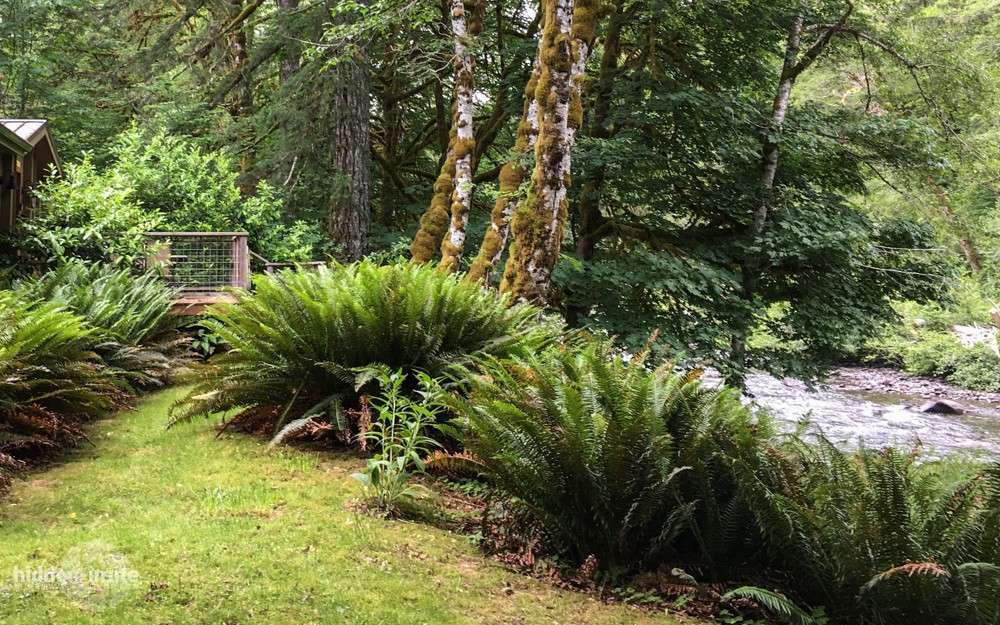 I have no idea if my blood pressure dropped or my cortisol levels declined, measures that Dr. Li and his associates at the Nippon Medical School in Tokyo claim are improved after forest bathing. I do know that my senses caught a break from too much stimulation in the softness of the forest, refreshing me. That was lovely, but it wasn’t the key to my experience.

What was different on this trip was that I lavished attention on my surroundings. I saw the forest and literally felt the trees. I walked on the mossy ground like the Roosevelt elk in the national park. For a few days I became part of a unique environment. The trick, as I move on to other adventures in other places, is to replicate this experience and allow myself to be embraced by my surroundings wherever I may be.