“Get closer to the wall. Don’t shoot at the wall, shoot along the wall. Use the wall as a leading line to direct the eye to your subject.” That was Ouria Tadmor, photographer, photojournalist and teacher, nudging me ever closer to a thick stone wall in Mea Shearim, Jerusalem’s ultra-Orthodox neighborhood.

As my shoulder brushed the cool stone, the man walking into the shop turned around to see who was speaking English behind him. A family walking toward us completed the frame. Click. That was the “decisive moment” when my shot went from ordinary to intriguing. Ouria was delighted. His lessons in street photography were clicking in. It was the last shot of the day. 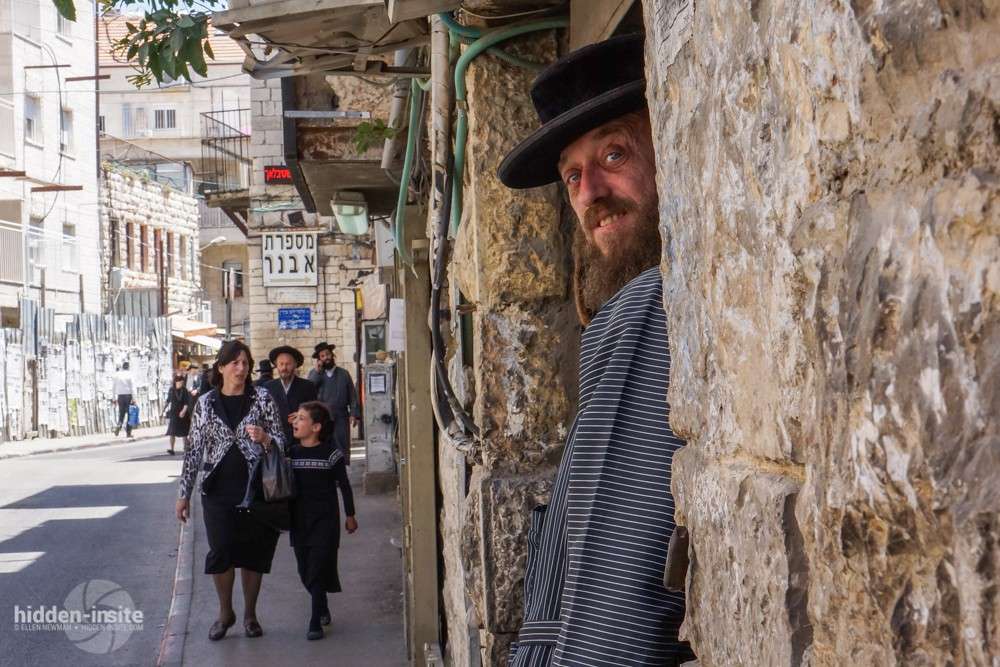 David and I met Ouria early that morning at Trattoria Haba on Jaffa Road near Jerusalem’s bustling Machne Yehuda Market. One of Jerusalem’s light rail stops is across the street. 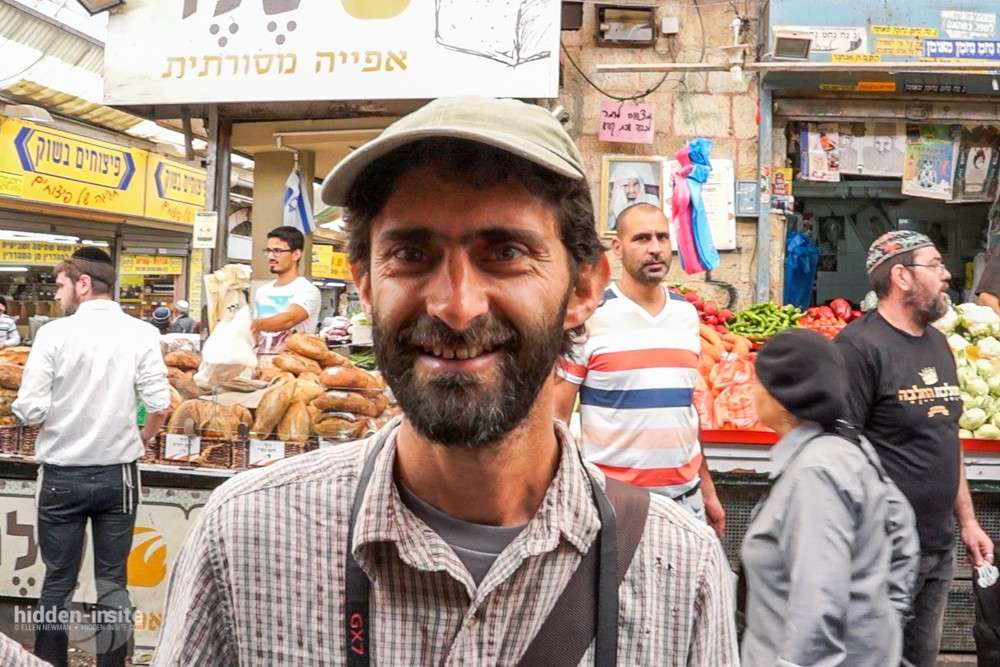 “I like to shoot at the intersection of neighborhoods, where people of different types come together,” Ouria told us over coffee and pastries as he outlined plans for the day. First we would take photos right outside to see “real Jerusalem” coming and going as people rush to work or to the market. Then we would explore the famous market. Afterwards we would visit Mea Shearim.

Jaffa Road: Let the image come to you

Our first lesson was to settle down and let the shot come to us. We set the shutter speed, aperture and ISO for the general conditions of the day. I tend to shoot with a medium range zoom lens so I can make adjustments as conditions change. Ouria stopped all that. He applied a bit of gaffers tape to my lens, essentially turning it into a 50 mm prime (fixed) lens for the duration. By choosing all the settings at the beginning of the shoot, we turned my Sony NEX-7 and David’s Sony a6000 into sophisticated point-and-shoots. That way when shots showed up, we’d be ready to catch them. 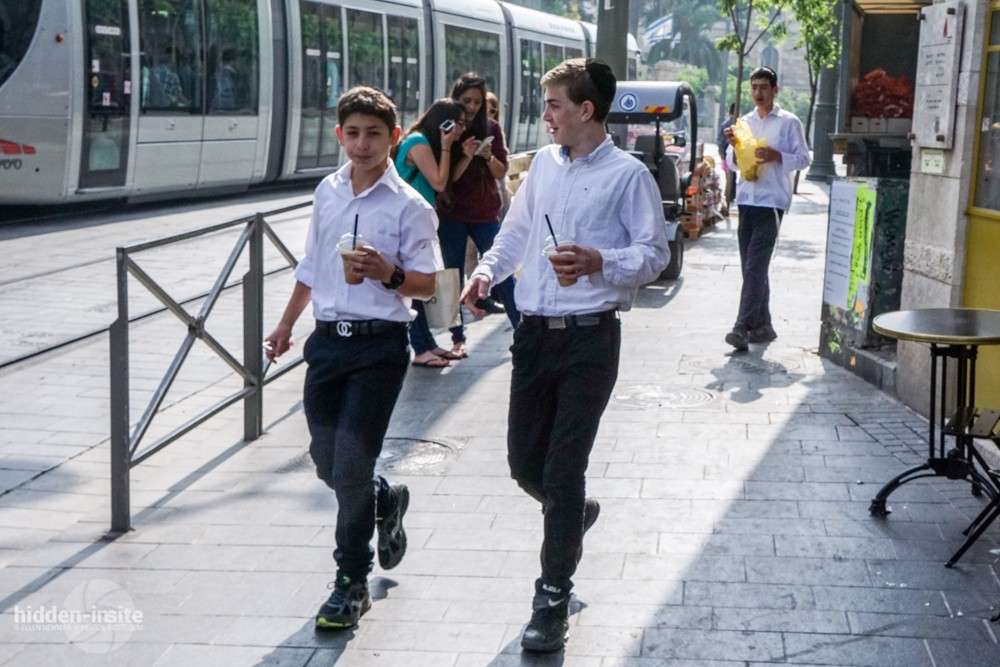 His next suggestion was to find a compelling frame – a crosswalk, the light rail platform, a doorway – and let the shot come to us. As photographers, we were to blend into the background and wait quietly until a story walked into the frame. We weren’t hiding, just watching. 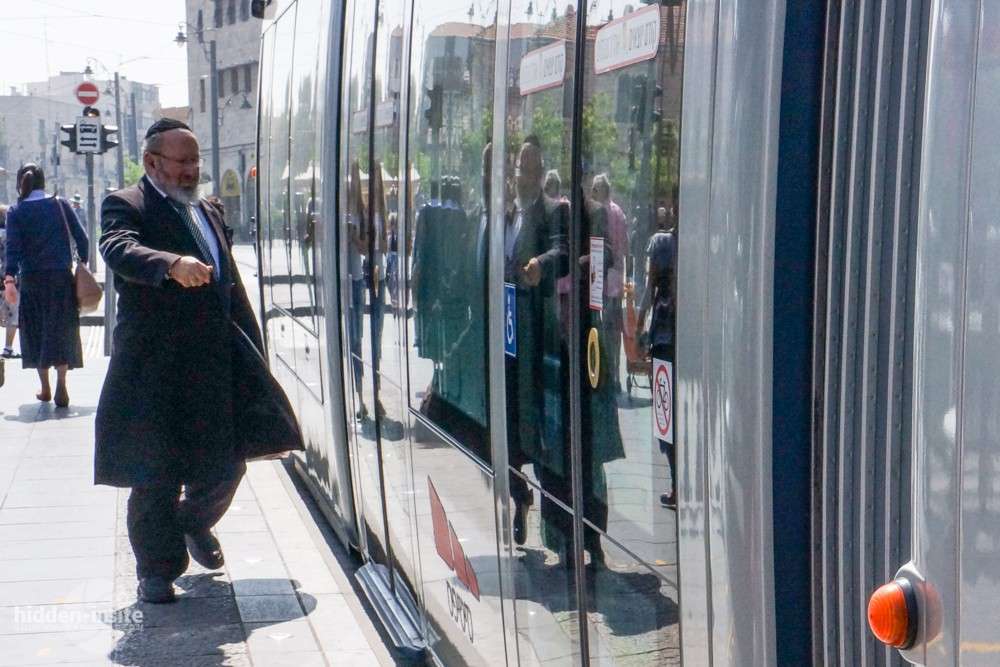 Taking our cues from Ouria, we learned to observe people on the street. Was someone walking with particular energy? Were two people from different worlds crossing paths? Did someone just miss the train? 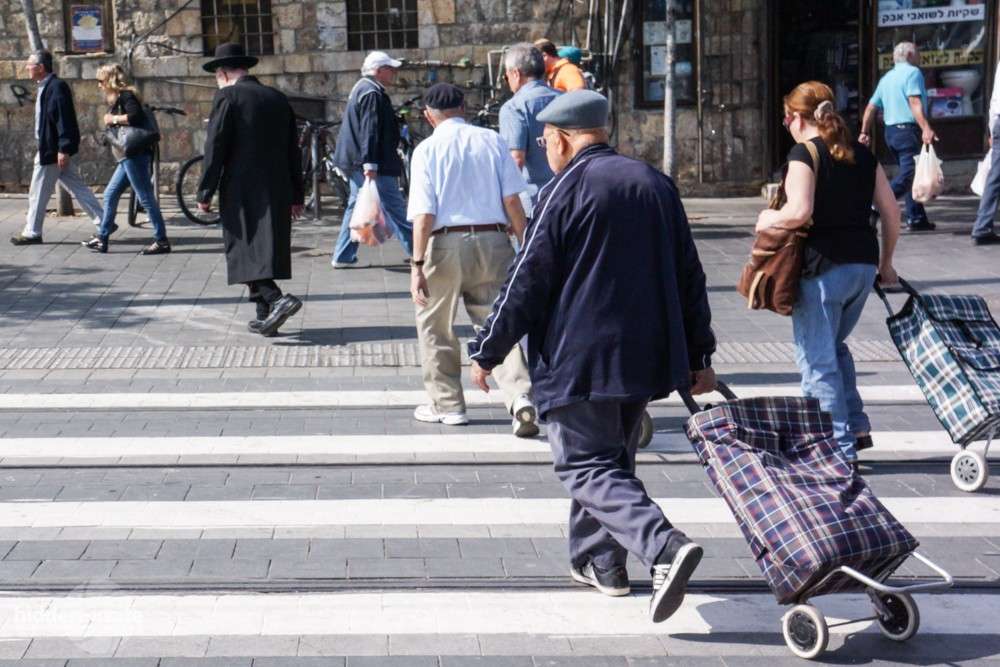 We learned to see the angle of people’s stride, the position of their arms, the tilt of their heads. What combination makes a compelling image? Which images tell a story?

As Ouria describes it, “Jerusalem is not only about holy sites, it is even more about holy light. Thursday afternoon, Jerusalem is getting ready for Shabbat and the best spot for street photography is the Machne Yehuda Market at the center of Jerusalem, a place where all different Jewish cultures mix with each other in one bakery, traditional recipes change hands over the spice and herbs shop, all wrapped by a special karma. The Jewish celebration of life starts here, and it happens every Thursday afternoon.” 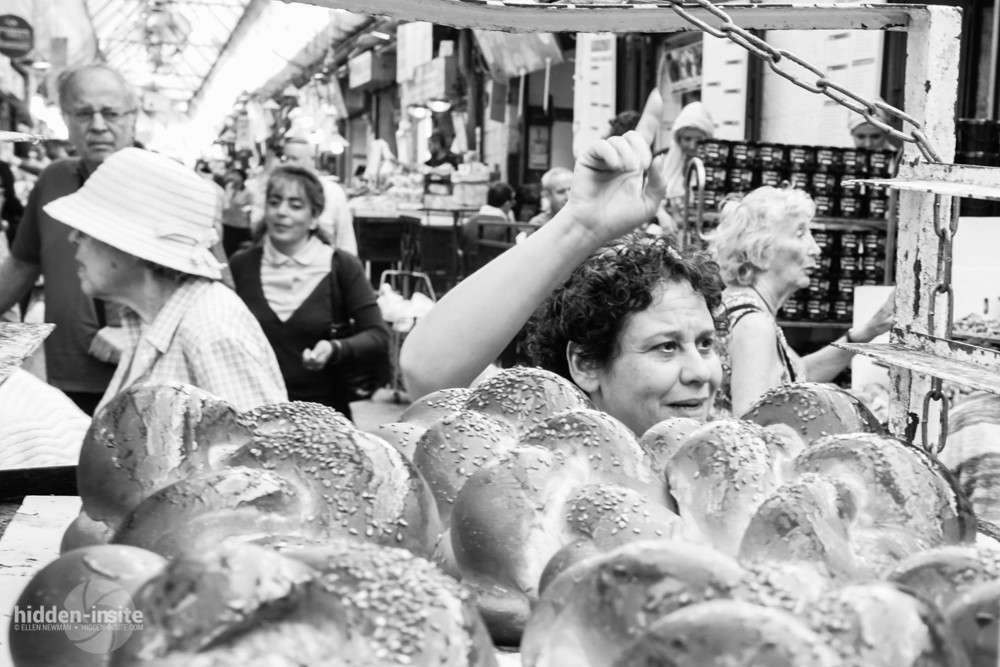 We were there a bit earlier, on Thursday morning. Once inside the market, Ouria introduced us to the concept of zone focus – setting the focus for the distance most subjects would be from the lens, typically f-8. So that’s how we set our cameras. That done, we were ready when decisive moments – especially those between people – showed up. 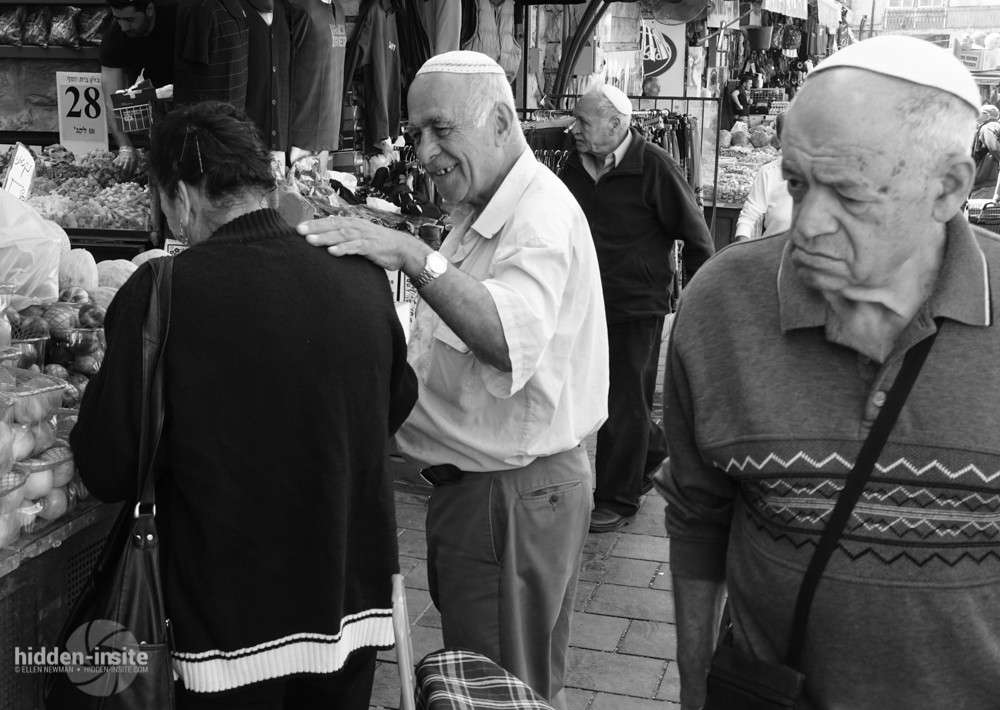 How to find those moments? Ouria taught us to look ahead to see what’s coming up. Who’s walking in our direction? What are they likely to do? 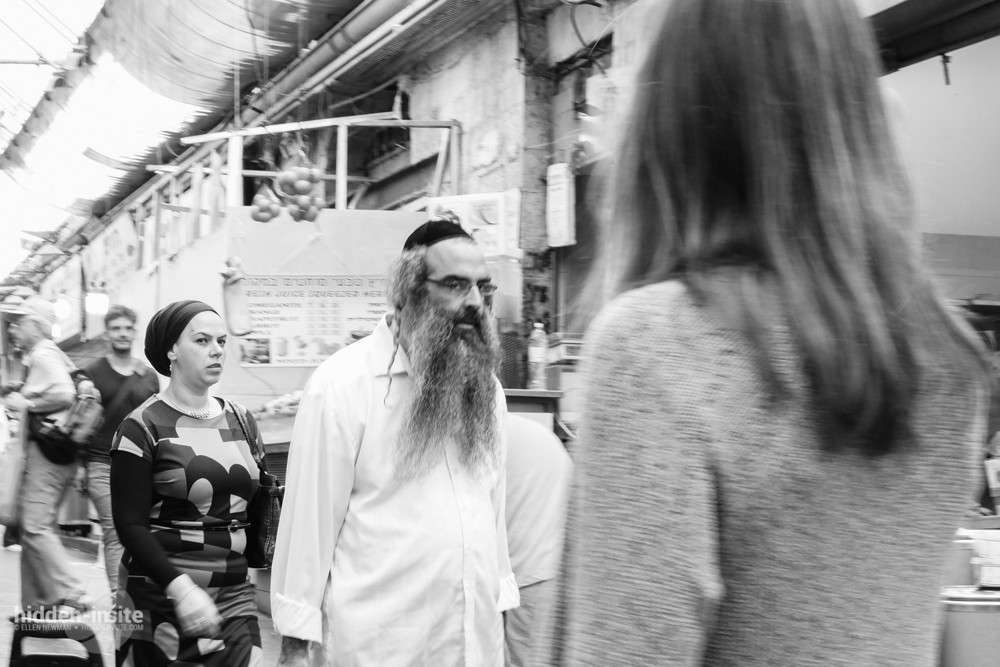 It was easier to anticipate people’s actions out on the street than in the market where everything is compressed into aisles filled with enticing food and people focused on buying provisions before Shabbat. 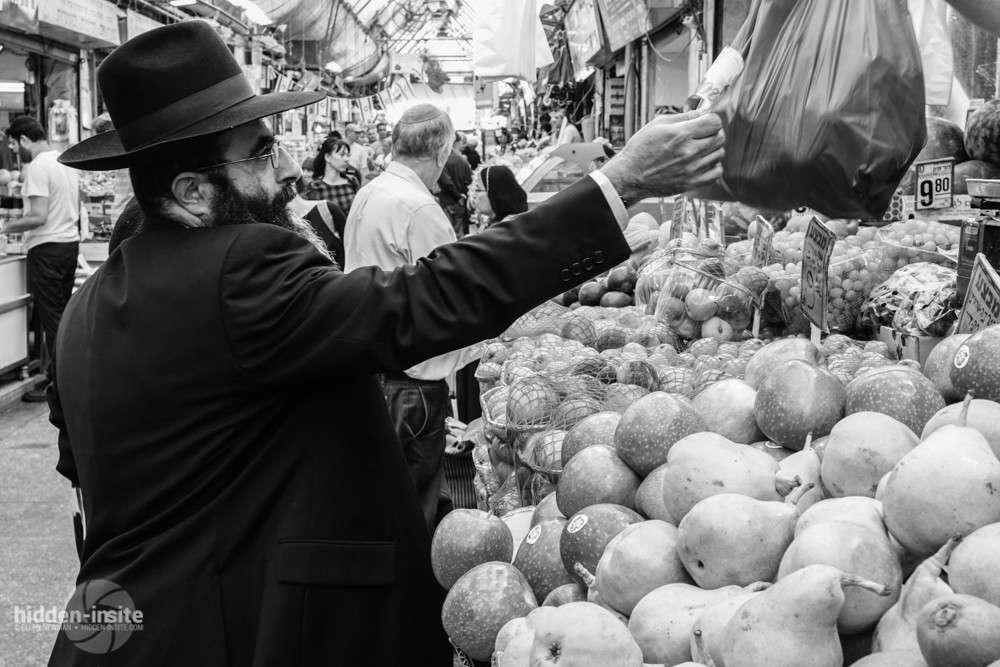 I’ve always looked for color in my photography. I love color. I love the visual accidents that happen when colors match up unexpectedly or contrast vividly. But Ouria asked us to set our cameras to black and white. I suspect there is some nostalgia for early 20th century classic photography in his affinity for B & W. But honestly, there is something special about starkness of the black and white images. Which do you prefer, color or black and white?

Mea Shearim: Discover the details that tell a story

After a break for a poppy seed pastry, we walked a few blocks to Mea Shearim. Established in 1874 as one of the first Jewish settlements outside the walls of the Old City, today Mea Shearim is home to an ultra-orthodox, mostly Chasidic, population. 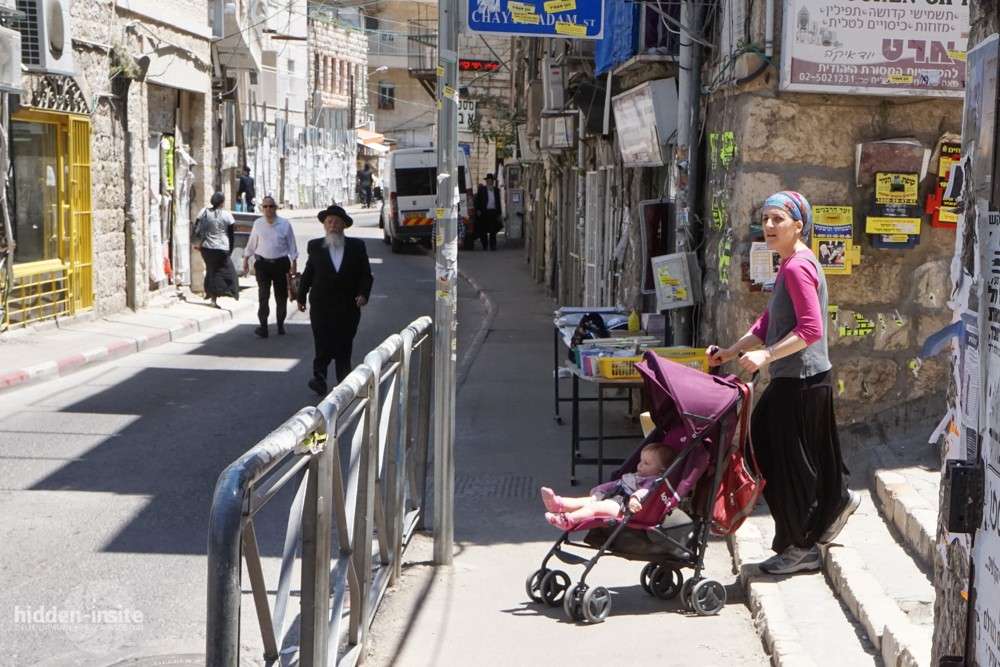 It’s one of those neighborhoods where women are expected to dress modestly. Ouria assured me that slacks and a long-sleeved sweater were fine. 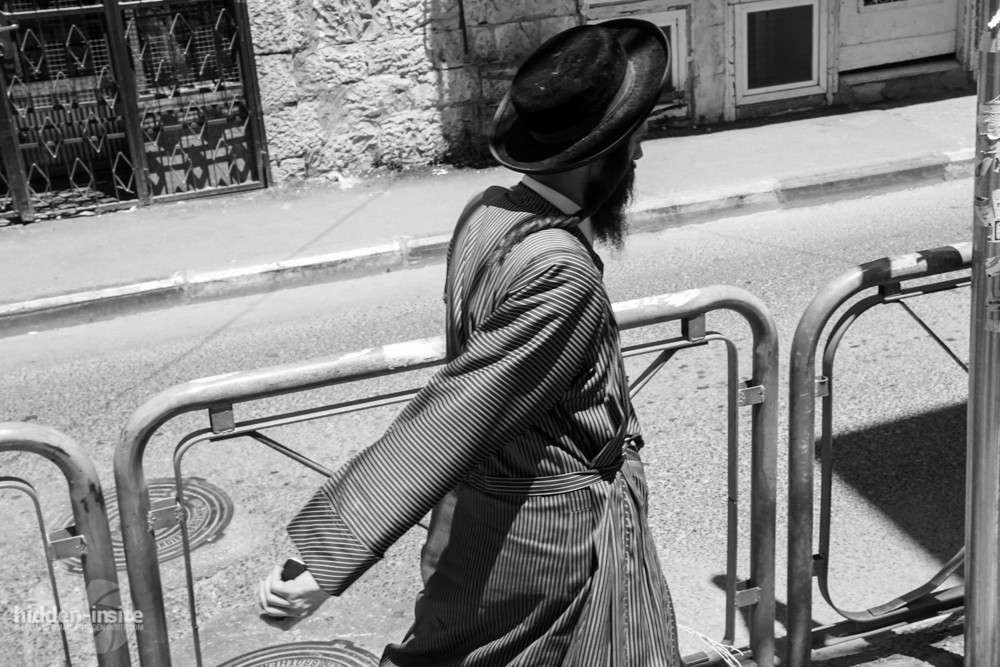 Mea Shearim is attractive to photographers because the men of the area tend to dress in the manner of 19th century, pre-revolutionary Russians. In fact, the whole area, with its stone buildings, courtyards and balconies, looks like an Eastern European town. 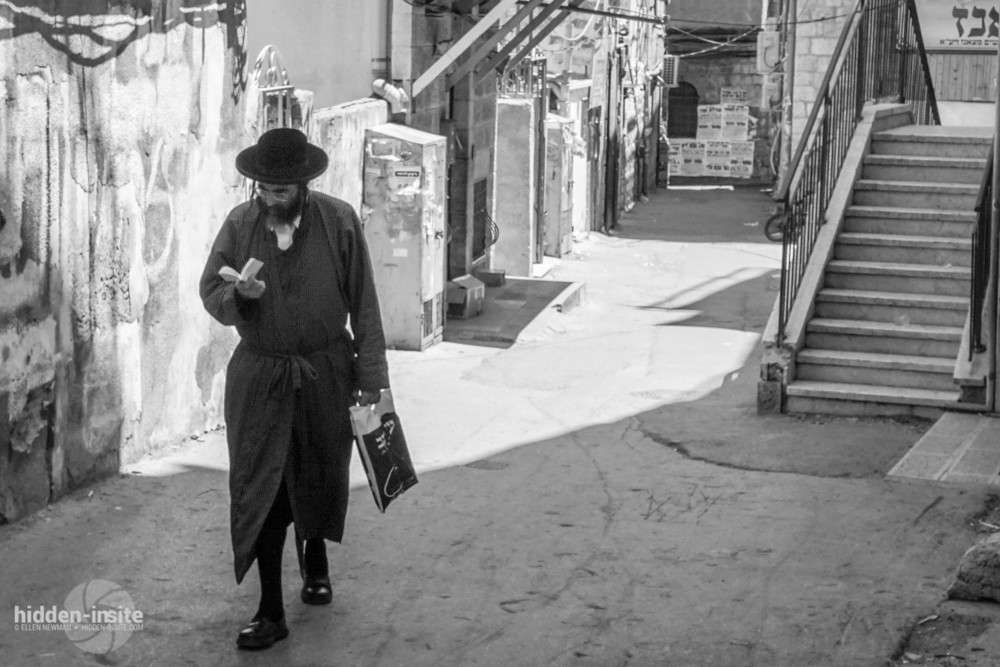 It was the details that told us that we were in a unique environment in Jerusalem: the people walking down the street reading from their prayerbooks; the outfits denoting various sects; the posters that proclaimed in English that Judaism and Zionism are “diametrically opposed” and that “Judaism rejects Zionism.” 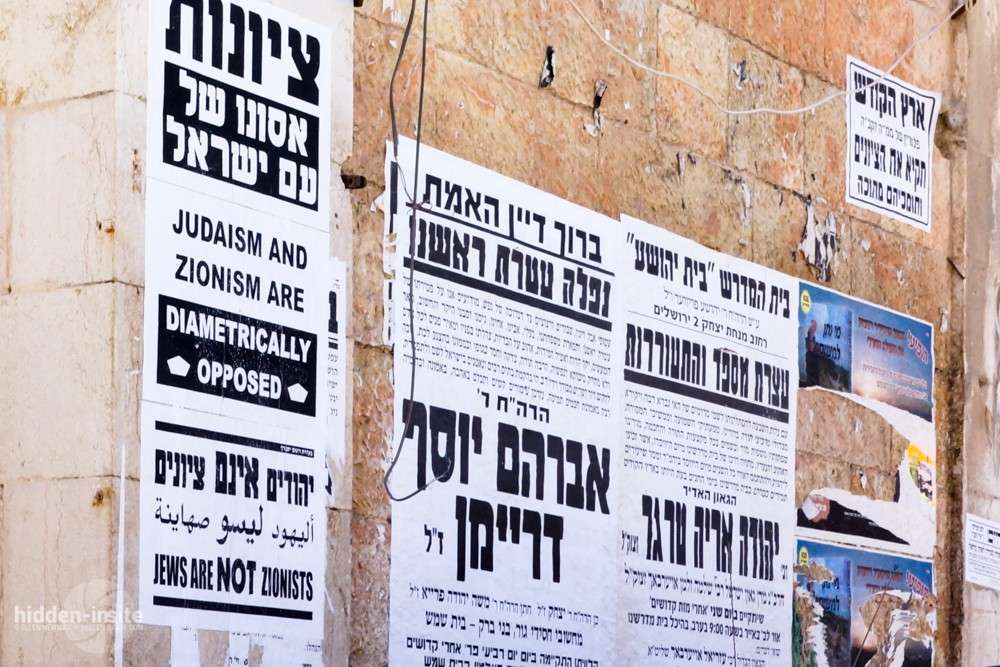 Every scene we saw, every image we took reminded us that, even in Jerusalem, with its many-layered history, Mea Shearim is a remnant of another time and place dropped into modern Israel. Although they were only blocks apart, Mea Shearim felt worlds away from the light rail on Jaffa Road. 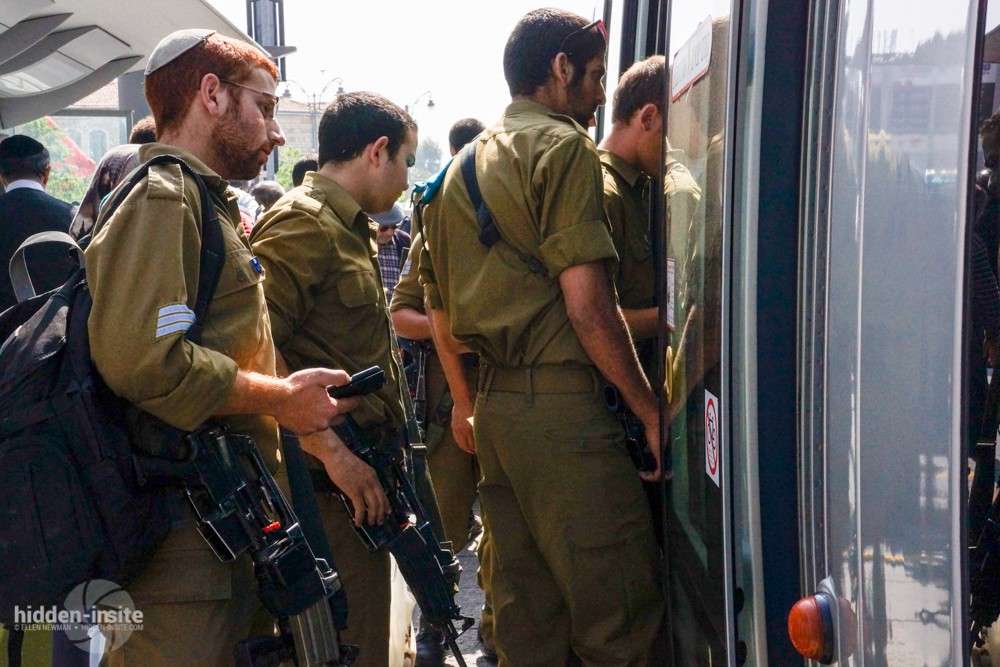 Time flew by during our morning with Ouria. Not only did we come home with some interesting images, but we added some new photography tricks to our toolkit. And wherever I am, even at home in San Francisco, I’ll never look at an intersection without seeing the white lines of the crosswalk as the perfect backdrop for an urban photo.

You can learn more about Ouria’s Jerusalem street photography workshops here. It’s a great way to spend a day in Jerusalem.