Ritualized Rivalry at the Wagah Border

Wagah is 15 miles from Lahore, Pakistan, and 20 miles from Amritsar, India. The Punjabi village was cut in two in 1947, when the boundary line between India and Pakistan was drawn, cleaving the proud Punjab into two states, one in each newly independent country.

Now, seven decades after Partition and Independence for both countries, Wagah is best known for one of the wackiest border ceremonies in the world, the lowering of the flags at the gate between the two nations. Part patriotic display, part chauvinistic charade and part Monty Python’s Ministry of Silly Walks, it’s like watching an extended half-time show. It goes on every night just before sunset.

We drove from Amritsar to Wagah on India’s Highway 1, the modern incarnation of the ancient trade route that linked Kabul in Afghanistan through Lahore and Delhi, finally ending at the sea near Calcutta. In the sixteenth century under the Mughals the road was known in Urdu as the Great Road. It became the Grand Trunk Road under the British Raj in the 1800s. That’s when the East India Company rebuilt the highway to facilitate trade and fortify its control over the subcontinent. 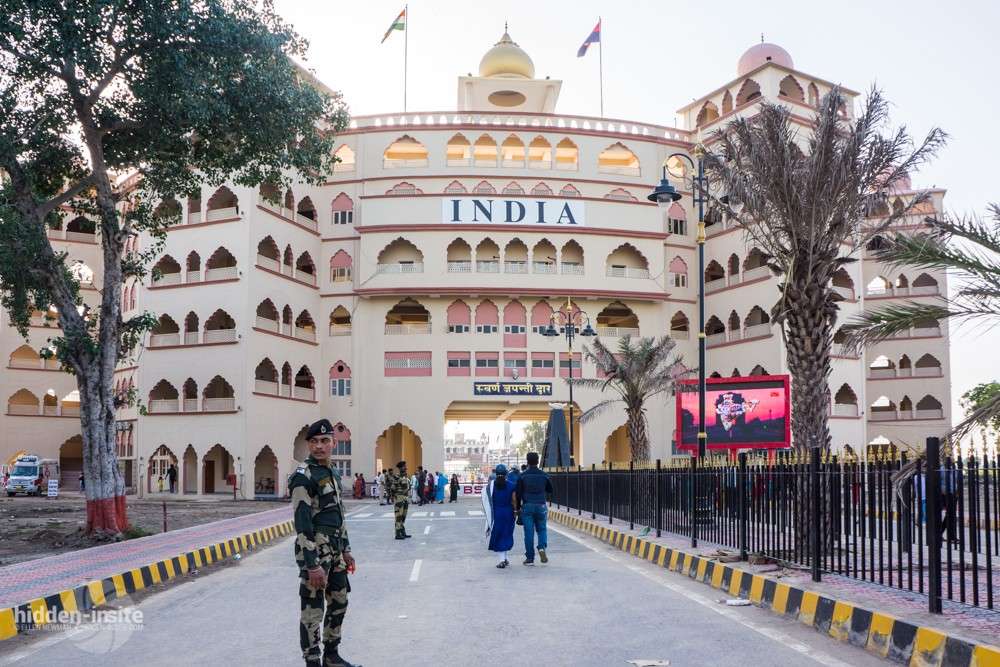 Today that storied highway has a hard stop at the border between India and Pakistan. The border is so tight and security so sensitive that visitors to the ceremony must carry passports. You can bring your phone or camera, but no handbags or backpacks.

Our guide, Sandeep, walked us up to the first security checkpoint. There, members of India’s Border Security Force checked our passports. Then we endured a half-hearted body check before being directed toward the stadium. We walked right up the middle of the famed road and through the stadium gate. 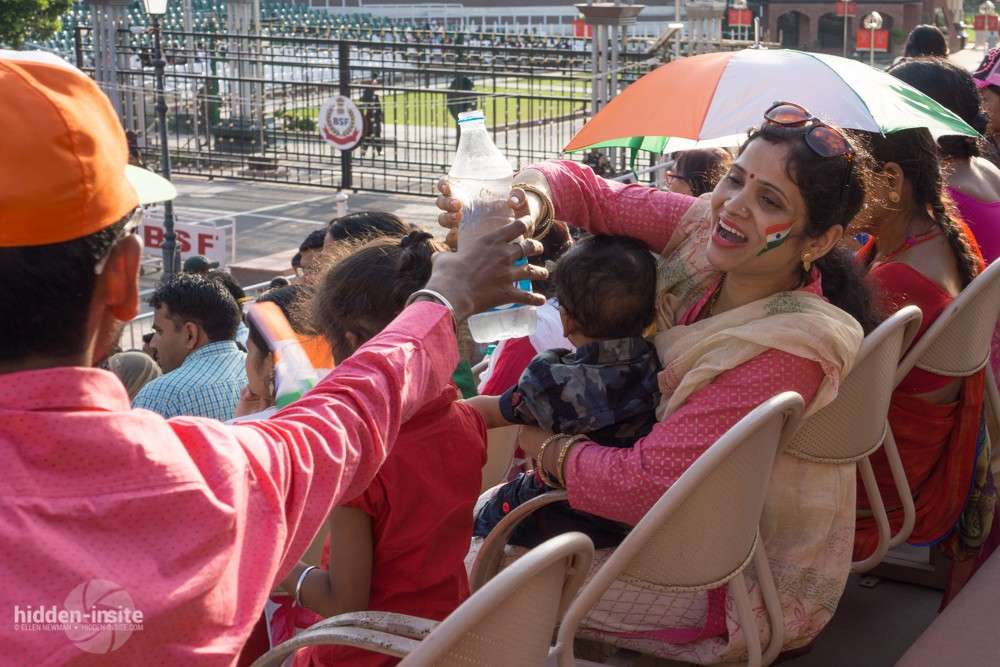 Inside we encountered a sea of people waving orange, white and green flags. Face-painted flags adorned the cheeks of women and children. Men sported orange caps. We searched for seats close to the Pakistani border so we could see the festivities on both sides. 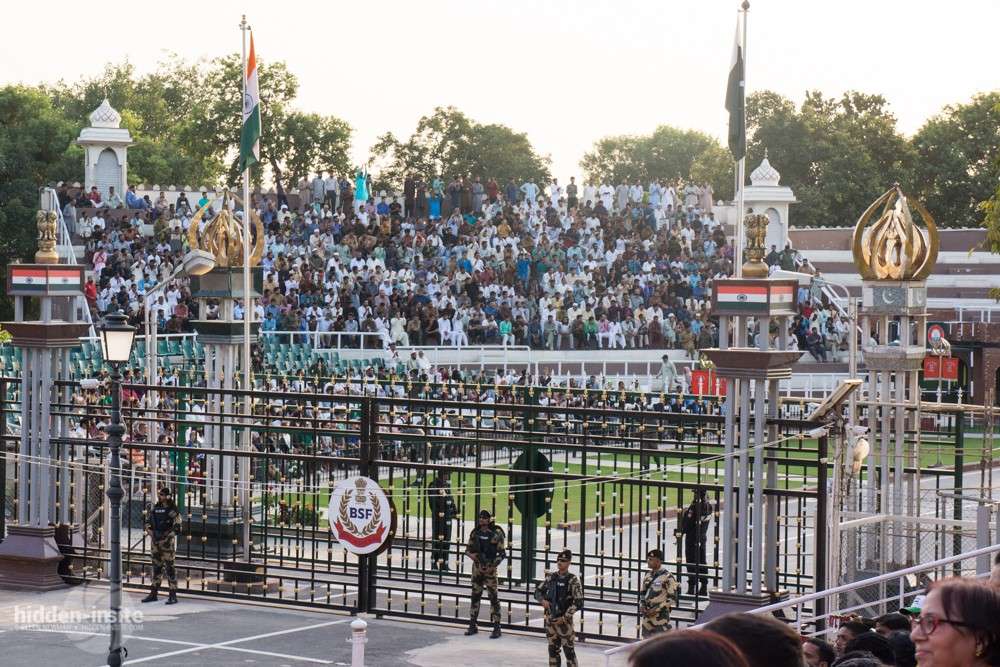 At the end of the stadium, where the road continues on to Pakistan, were two locked gates adjacent to each other. Two tall flagpoles flanked the gates. Beyond the fences, we could see the Pakistani audience filling their seats. They didn’t seem as animated as the people on the Indian side. As five-week visitors to India, we pretty much took a rooting interest in the Indian position. 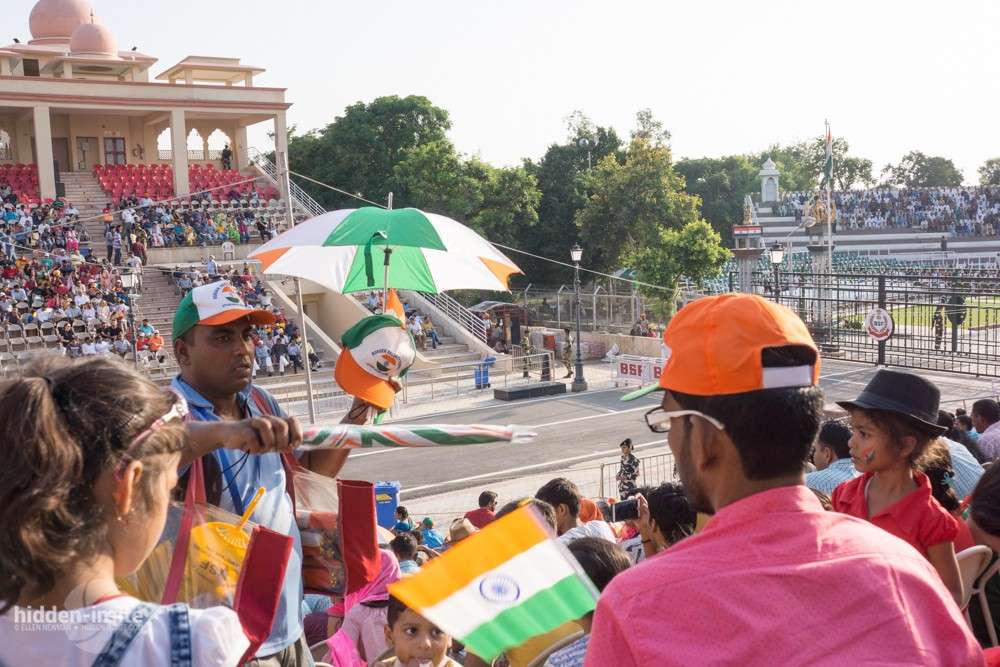 Venders hawked bright orange, green and white sun umbrellas and bottled water. Parents shared their excitement with children too young to understand the idea of Partition. Energy in the stadium frothed in excitement, just like anticipation before a big game – any big game – football, soccer or cricket. 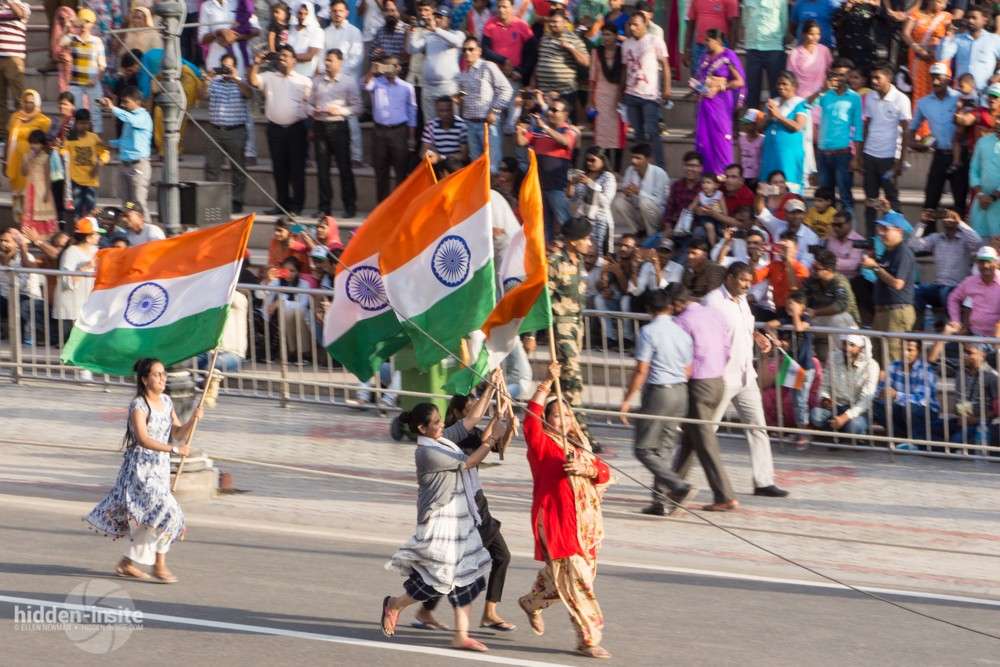 The buzz gave way to upbeat Bollywood music. Groups of women in saris and their children ran up and back carrying large Indian flags. The audience roared. 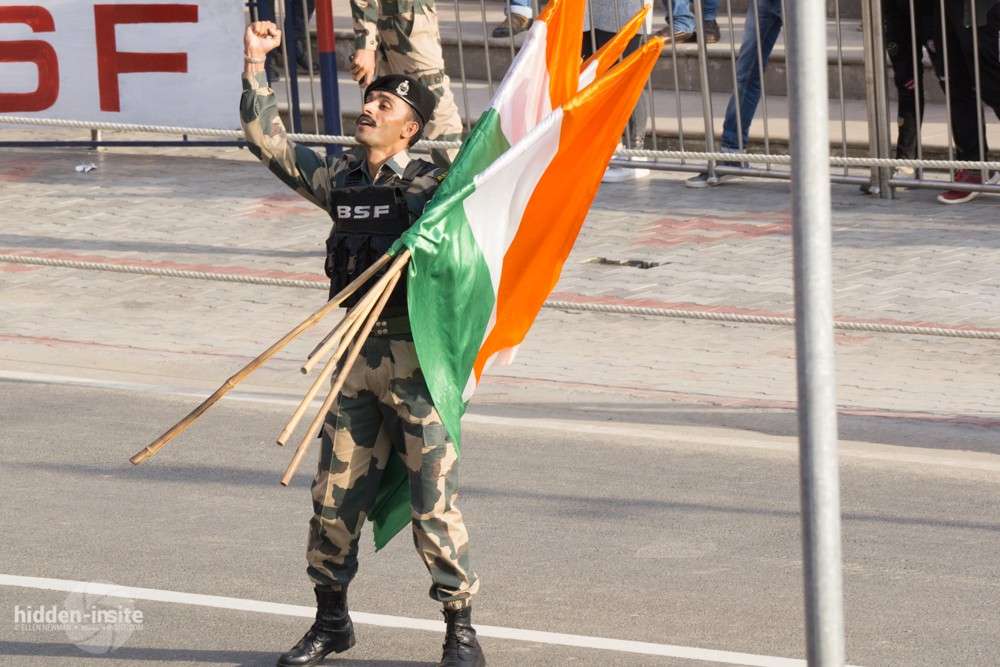 One of the Border Security Force officers was the head cheerleader. “Louder,” he cried in English and Hindi. “Hindustan, Ram, Ram,” the crowd yelled back. “Long live India.” Another crowd of women filled the roadway dancing to the Bollywood music. Spirits were high. 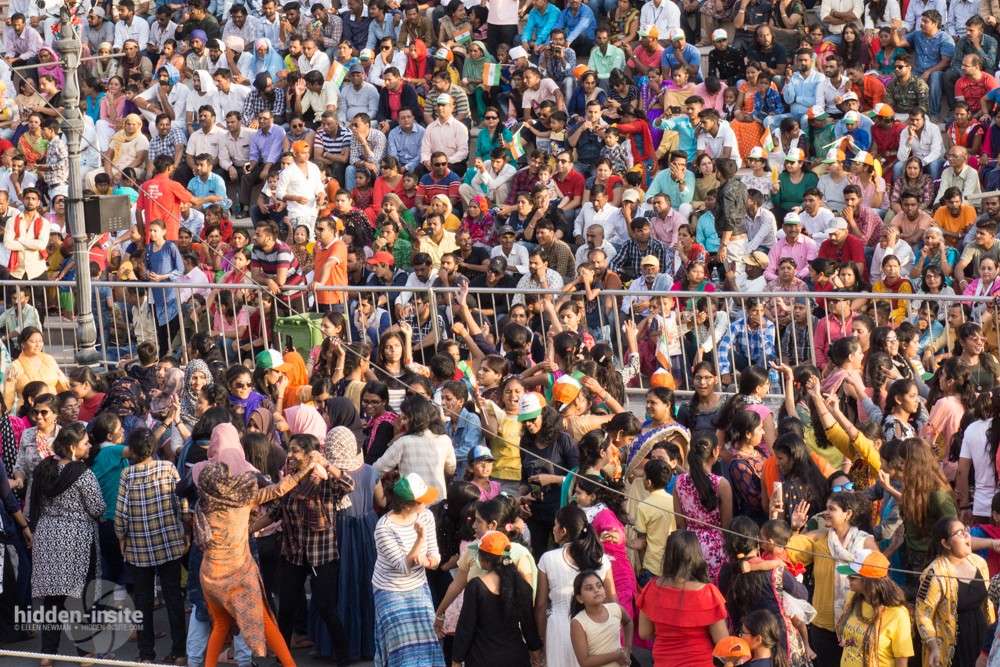 The main event: lowering the flags

But that was just the pregame show. As suddenly as festivities had started, the roadway was cleared for the main event, Beating Retreat (such a British name!), or the lowering of the flags. 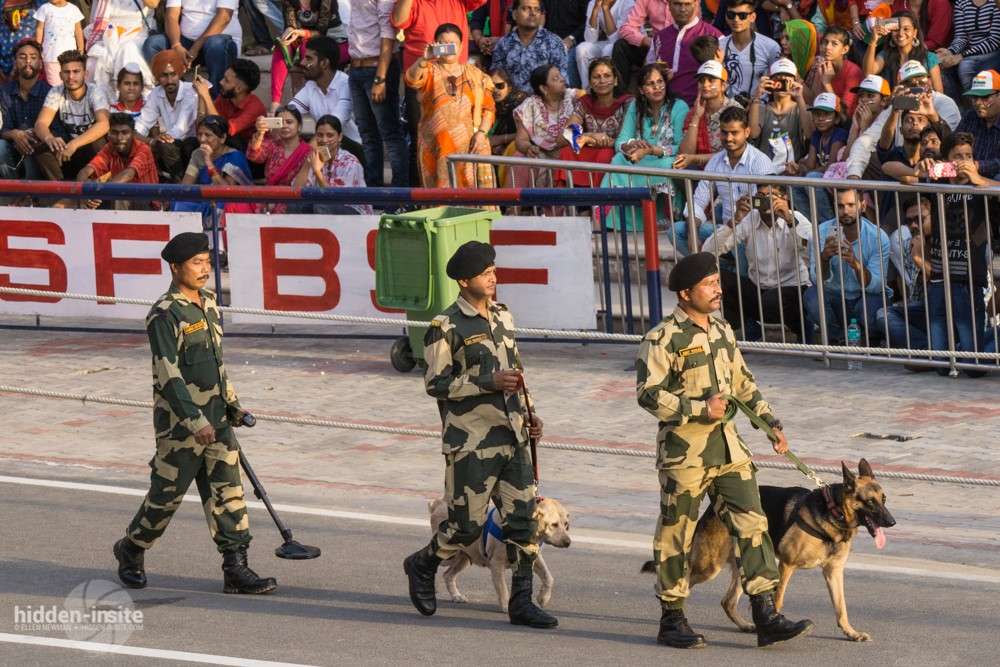 The Border Security Force canine unit used the break in the action to conspicuously patrol the roadway. Yes, there had been an incident near a restaurant on the Pakistani side of the border in 2014. No one wanted a repeat. 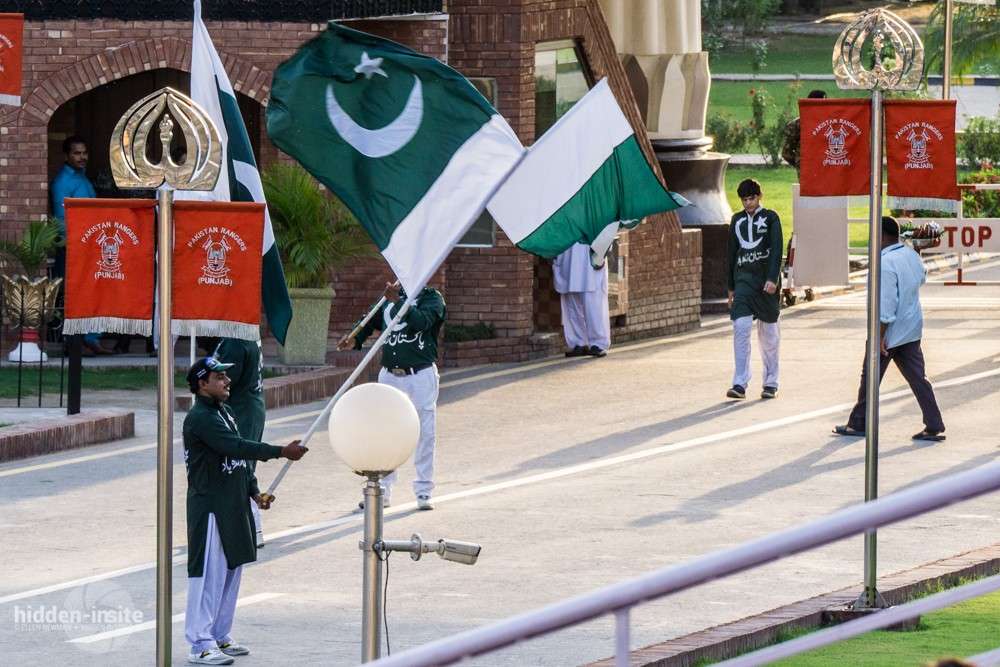 In the meantime we could see activity on the Pakistani side. Members of the Pakistani Rangers (as their security force is called) brought out their green and white flags for a drill routine. We couldn’t hear what the Pakistani audience was yelling. From where we were sitting, cheering Indians drowned them out.

The Border Security Force team, about a dozen strong, caught the last golden rays of the sun at the top level of the stadium before marching down to the Grand Trunk roadway, which served as center stage. Let the revels begin. 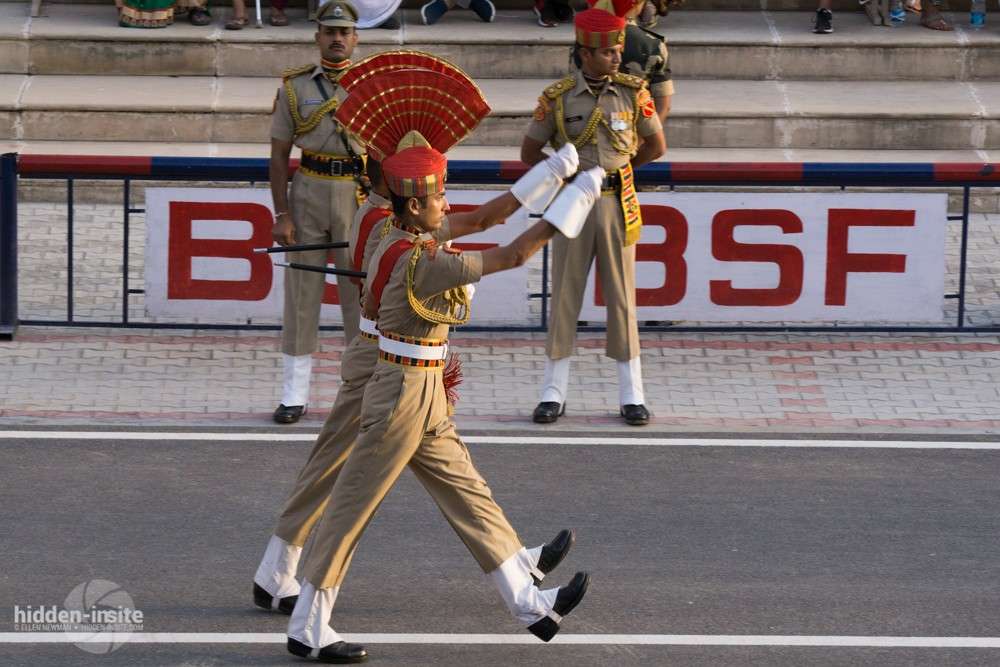 Clad in khaki uniforms, white spats and red turbans topped with elaborate red and gold fans, the drill team marched up and down the road. They knocked on the locked gate, not with their hands, but with high kicks. 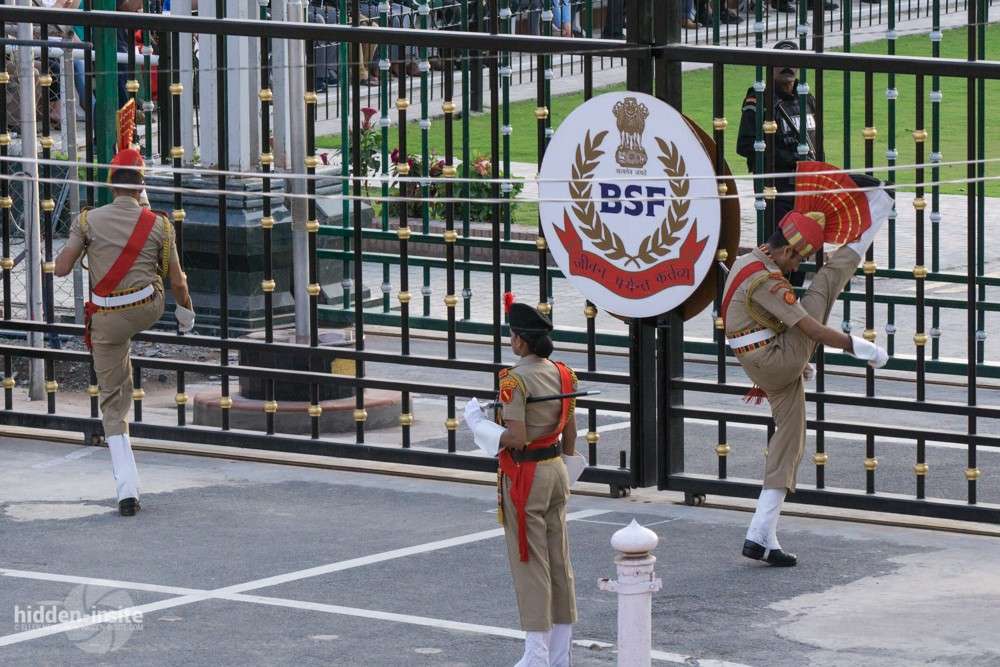 The Pakistani team, in black with bright red sashes and equally elaborate fanned gray and white headgear, marched up to the their gate and proceeded to kick. 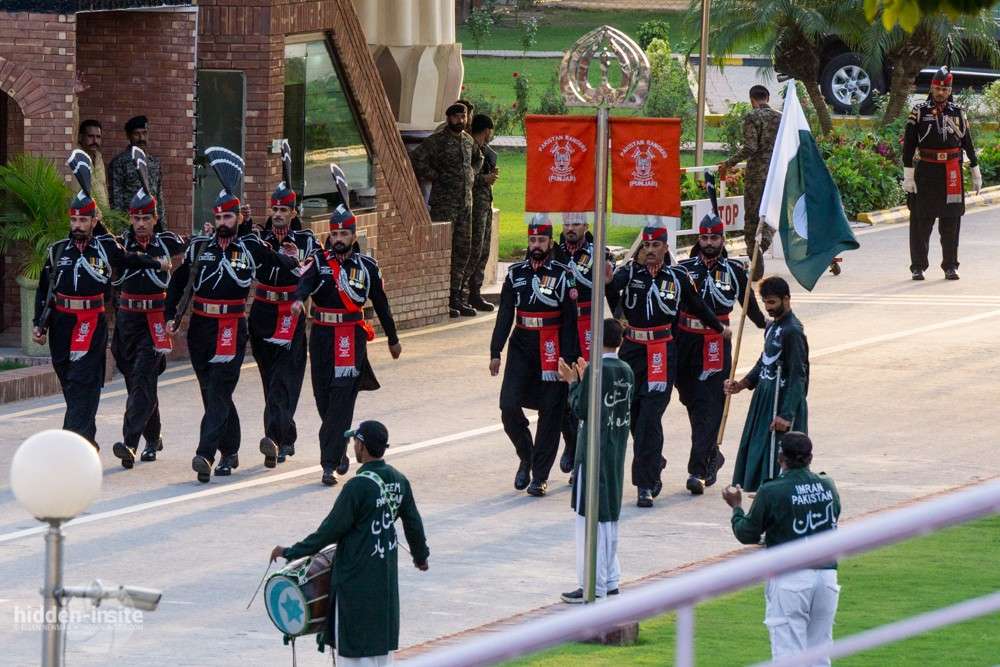 The gates rolled open, and the teams tried to outdo each other with high kicks, silly walks and pantomime aggression.

Clearly this show of ritualized rivalry was intricately choreographed. Each kick was met with an equal and opposite kick. Each gesture was mirrored on the other side. Someone was practicing! Could they be friends? 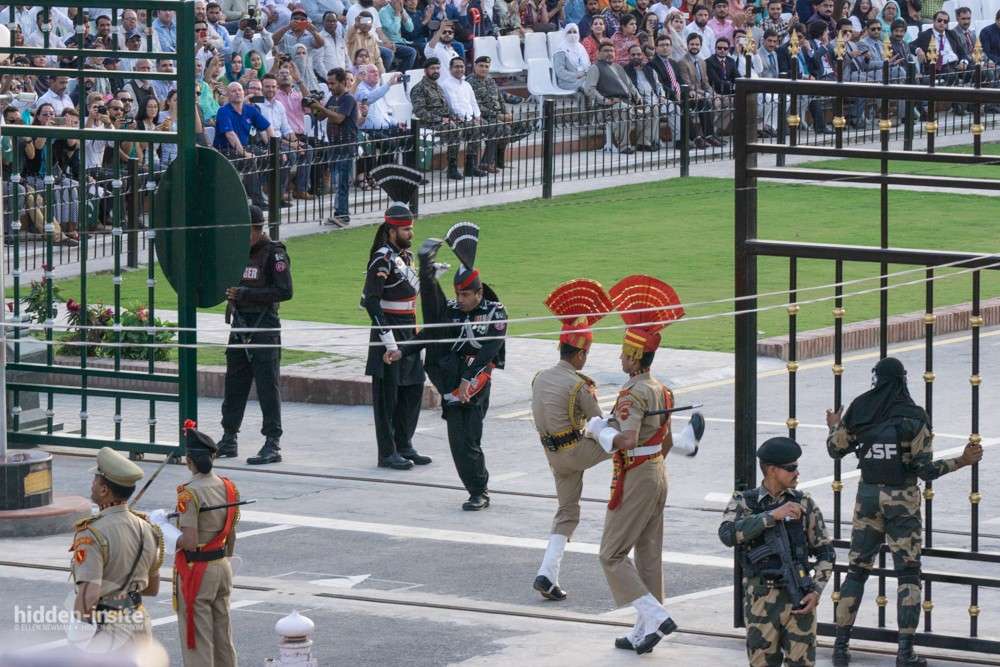 Once upon a time the Punjab was one state. The people in Wagah were neighbors of one city. People traveled freely back and forth from Amritsar to Lahore. The situation is much more complicated now. Individuals need hard-to-come-by visas to visit. Rules vary for Indians, Pakistanis and foreigners. Goods, however, regularly travel back and forth. But for security’s sake, the trucks are unloaded and reloaded at the Joint Check Post so no trucks or drivers cross the border.

“There is a great business between Pakistan and India,” Sandeep told us on the way back to Amritsar. “We buy sugar, dried fruits, cement, mutton and fabric from Pakistan. They buy beans, rice, fruits, vegetables and textiles from us,” he says. “Our culture was the same before Independence. Pakistani people like to wear Indian fabrics and Indian people like the Pakistani fabrics.”

He describes the relationship between India and Pakistan as that between estranged brothers or feuding cousins. He didn’t mention the fundamentalists or the nuclear capabilities on each side, facts on the ground that make the ceremony at Wagah so intriguing. 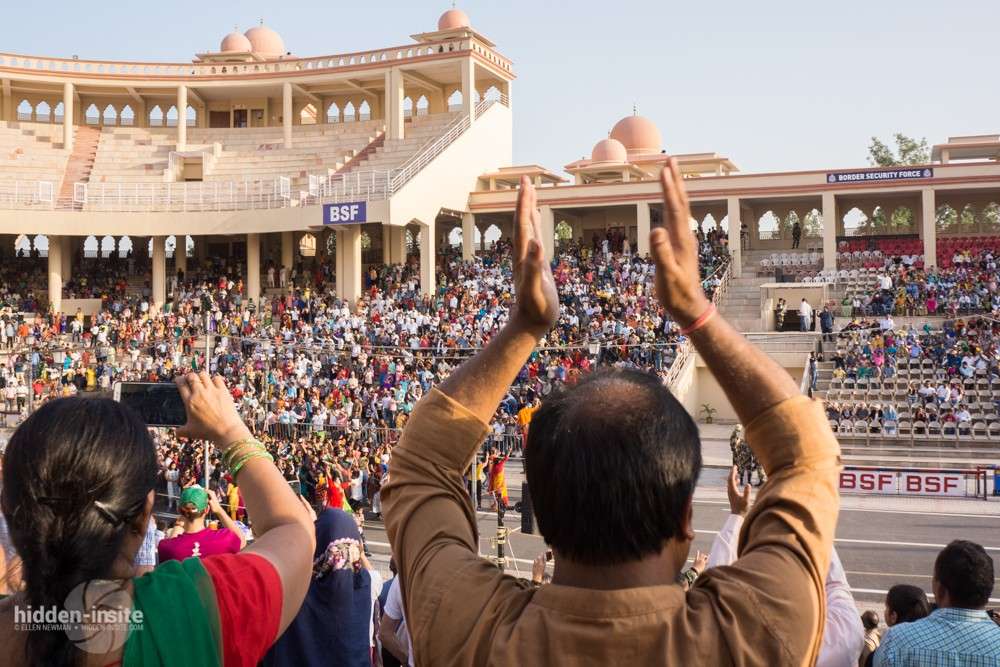 “So, how did this whole thing start,” I asked Sandeep over dinner one night. He explained that in 1959 the generals from both countries were friends. They decided to do the ceremony both to improve relations and to encourage trade. “The soldiers on both sides exchange dinner and exchange sweets on special occasions,” he explained. “They knock to open the gates and shake hands when it’s finished.” 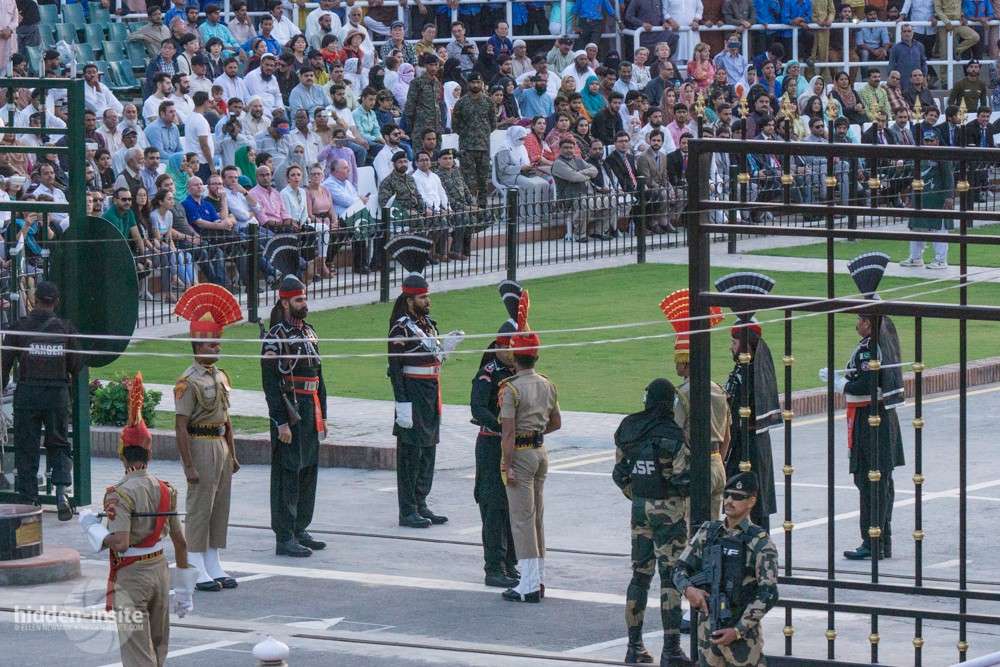 But before they shake hands, they need to lower the flags. Slowly. In sync. Drawing out the suspense, even though there is none. The flags will come down. The soldiers from each side will salute. The gates will be shut. And the visitors on each side of the Wagah border will go home having witnessed a delightful exercise in ritualized rivalry.

May that rivalry stay confined to two side-by-side stadiums on the Indian-Pakistani border.