Feeding Multitudes at the Golden Temple

Seated at a low communal table at the Golden Temple in Amritsar, India, my neighbors kept correcting me on the proper way to roll discs of dough into chapattis. Their corrections were subtle. A gentle pat on my arm from my seatmate to look at her technique. Two hands on top of mine exerting a different pressure on the rolling pin. Anything to keep my chapattis from looking like a preschooler’s map of India. 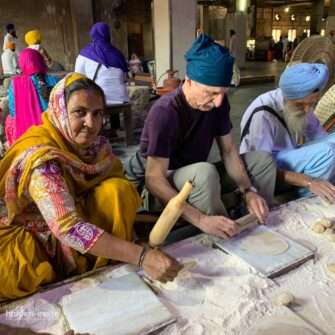 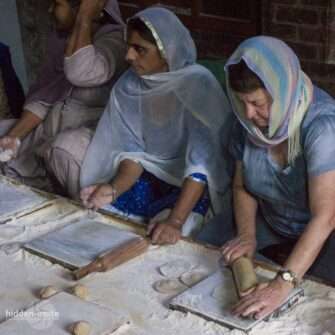 The men and women at my table were fast, quickly rolling their discs back and forth, pausing to coat the dough in the flour that covered the table, then tossing their chapattis onto the pile waiting to be cooked. I tried to follow their example. 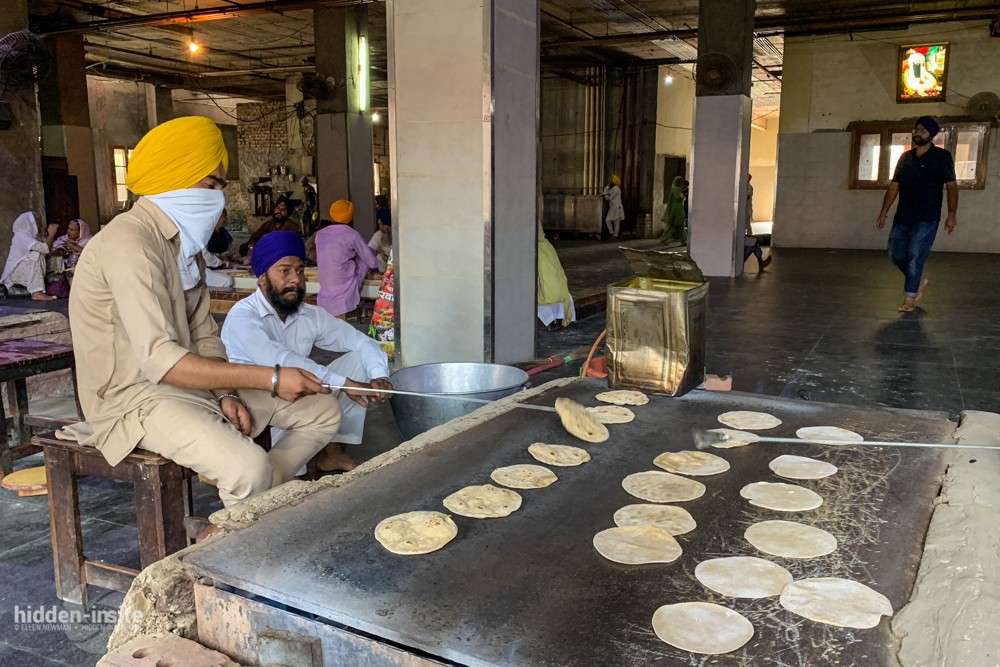 We were working in the kitchen of the massive langar or dining hall at the Golden Temple, the spiritual center of the Sikh religion. While other parts of the vast temple complex convey a sense of grandeur befitting one of the world’s great religions, the spacious langar sets the emotional tone for a religion that prides itself on feeding all who come, rich or poor, light or dark, Sikh or not. 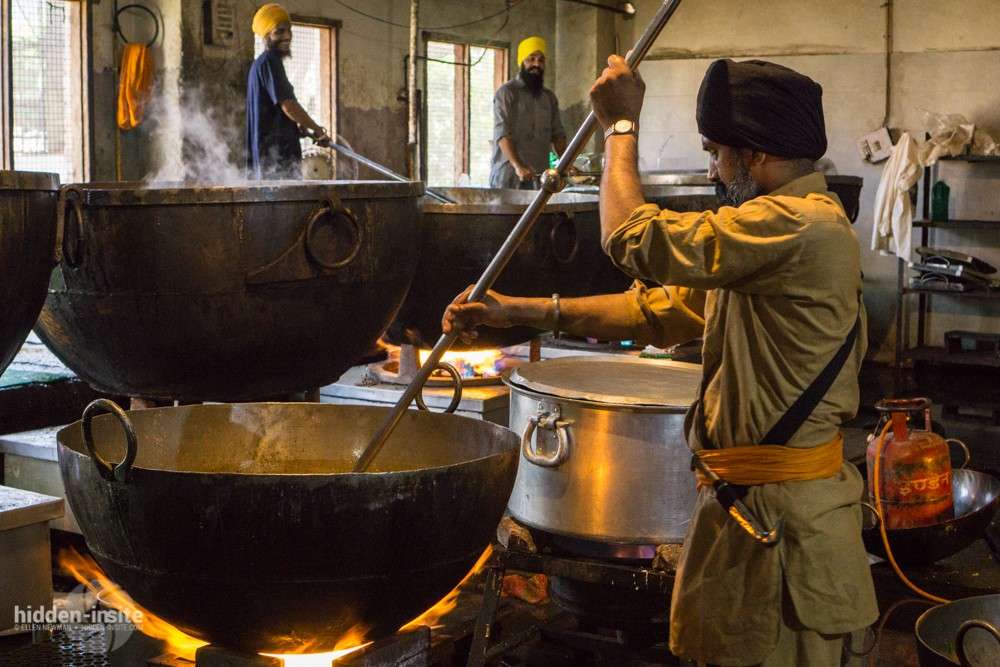 Sikhism is one of the youngest and the ninth largest of the world’s major religions. Its origins trace to approximately 1500, when Guru Nanak began teaching a faith distinct from the Hinduism and Islam practiced at the time in the Punjabi region of what is now India and Pakistan. 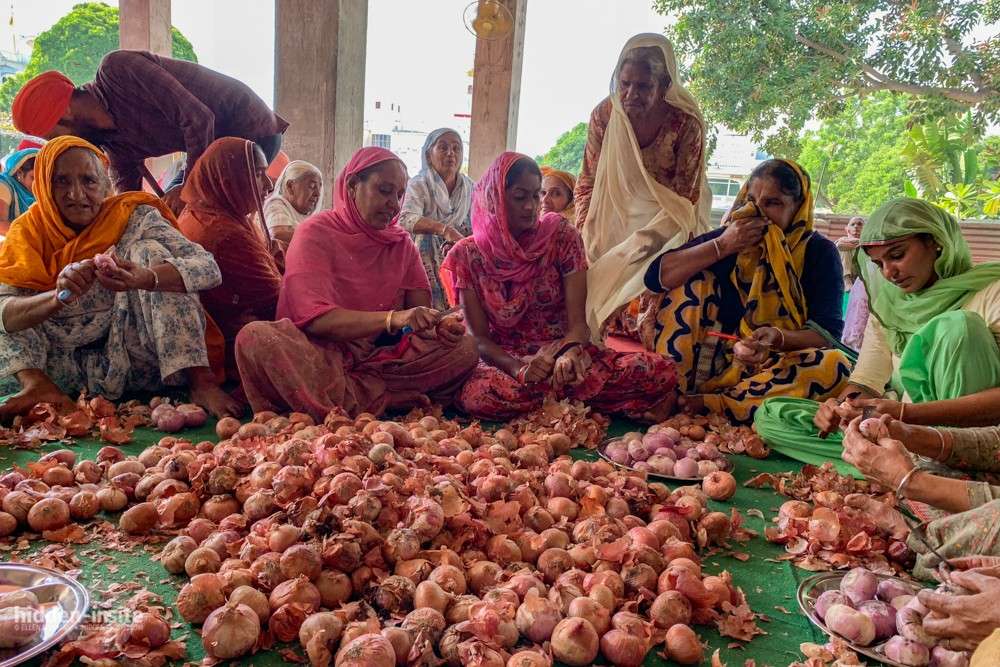 Joining the Sikh volunteers cooking for the 50,000-100,000 visitors who come to eat at the Golden Temple each day offered a glimpse into the Sikh worldview. We saw groups of men and women peeling mounds of onions outside the dining hall. 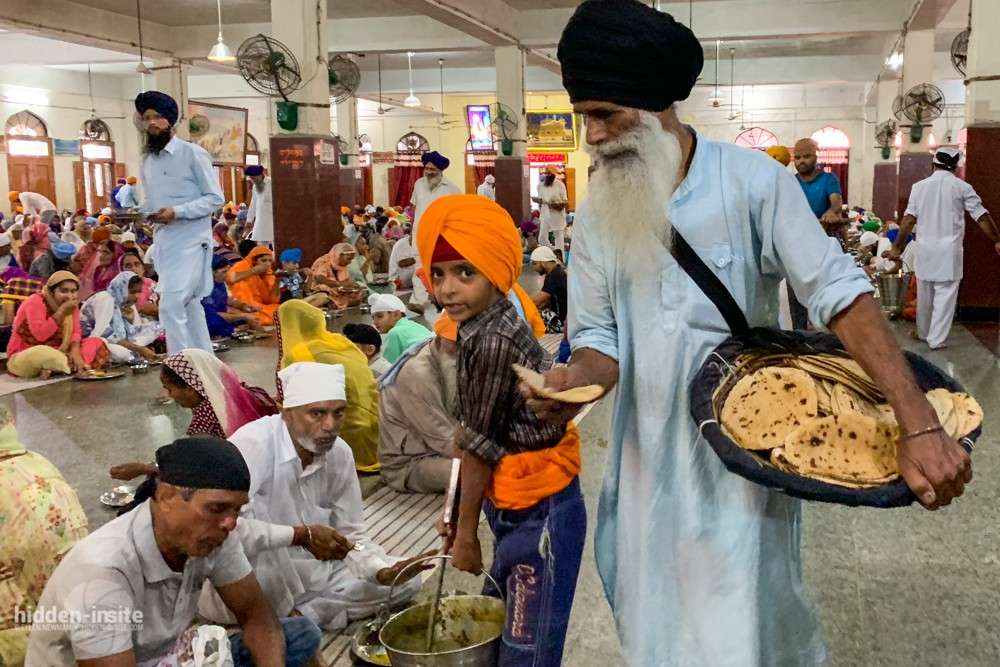 Other people carried food to the rows of people sitting down to eat. And after the meal, others collected silverware or washed the dishes in a long trough. 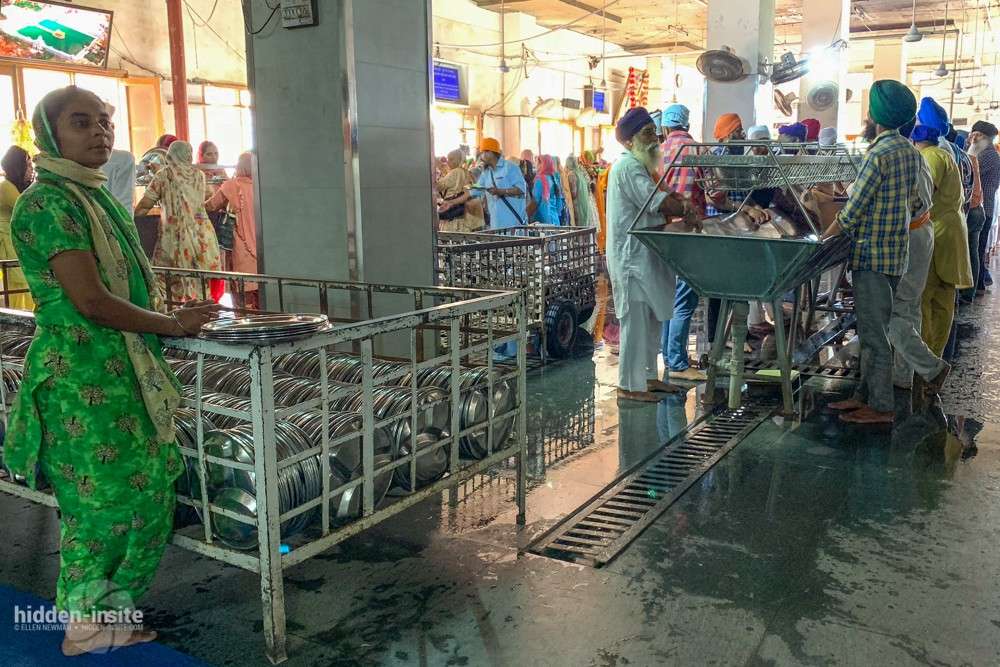 Work and service are obviously intrinsic to the Sikh perspective. 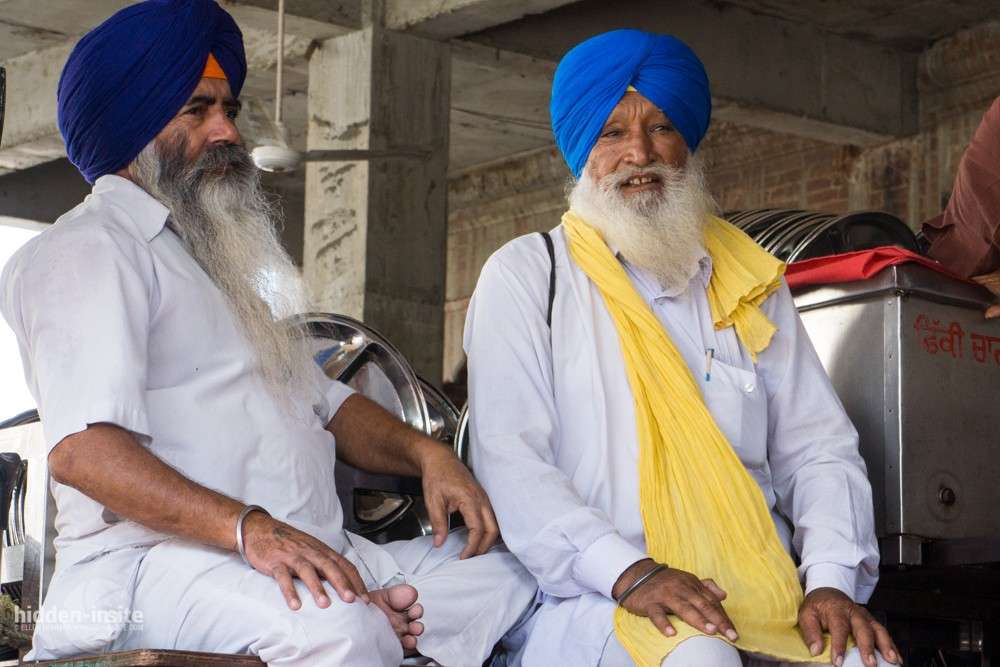 But trying to understand an unfamiliar religion on a deeper level in one visit to a famous holy site can be a challenge. Luckily, Sandeep, our superb guide, gave us a head start.

A brief history of Sikhism

“Sikh means student,” he told us. More broadly it can be translated as disciple, seeker or learner. The Guru (spiritual teacher) Nanak subscribed to the idea that there is one father and that we are all children of the one father, and therefore equal. Although Nanak was born Hindu, he didn’t follow the rituals of Hinduism. 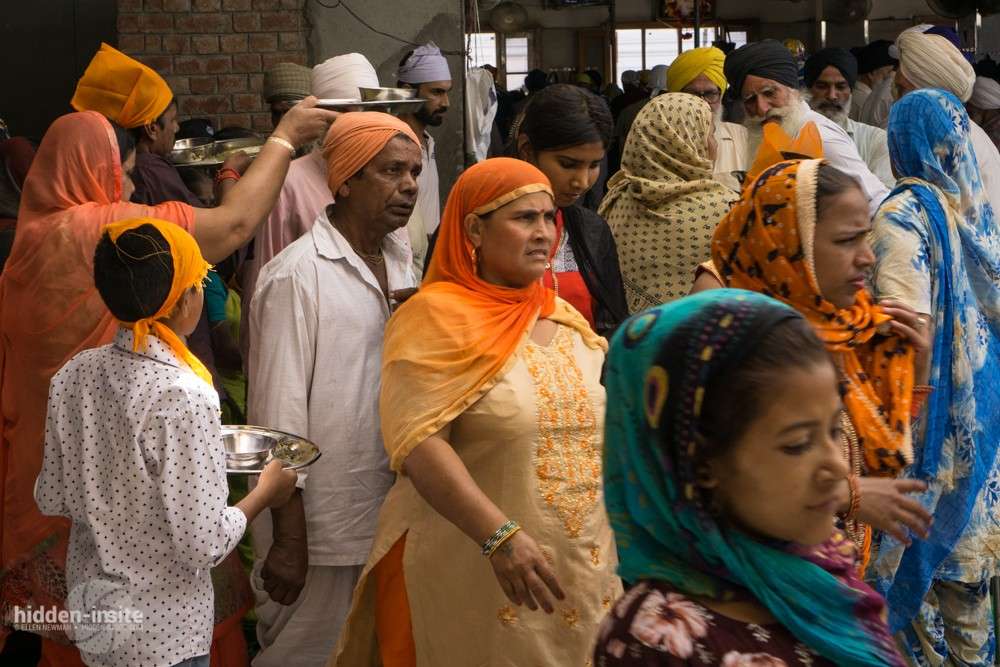 “His new faith eliminated caste, idolatry and practices such as wives having to die with their husbands,” explained Sandeep. “His big goal was to make everyone equal.” It was Guru Nanak who created the tradition of the free kitchen that is integral to all Sikh temples or gurdwaras.

Sikhism evolved over the centuries with nine other gurus or masters following Guru Nanak. The fourth, Guru Ram Das, built the iconic pool, the pool of nectar, for which the city Amritsar is named.

His son, the fifth guru, built a temple with four entrances welcoming people from the north, south, east and west, in the middle of the pool. It is called the Harmandir Sahib. In 1803 the Sikh Maharaja Ranjit Singh, who consolidated his rule from the Punjab to Kashmir and Pashtun, rebuilt the temple in marble and gold. 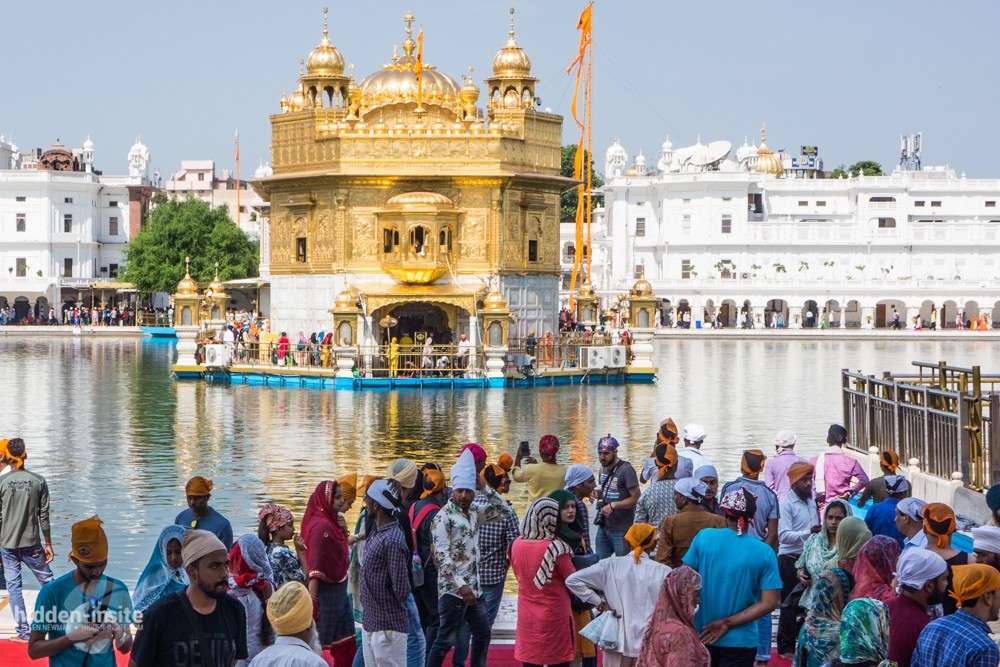 In 1708 the tenth guru or master, Guru Gobind Singh, decreed that there would be no eleventh or further masters. From then on, the Sikh holy book, known as the Guru Granth Sahib, would be the only living guru. It is available for viewing during the day in the Harmandir Sahib. From daybreak on readers chant the prayers of the day. At about 9:30 each evening, with much ceremony (check out the video at the end of the post), the book is brought to the Parliament building or Sikh headquarters to go to bed. It is retrieved again at 4 the next morning.

To visit the Golden Temple is to bathe in an atmosphere of calm and tranquility that is hard to find in most of India. 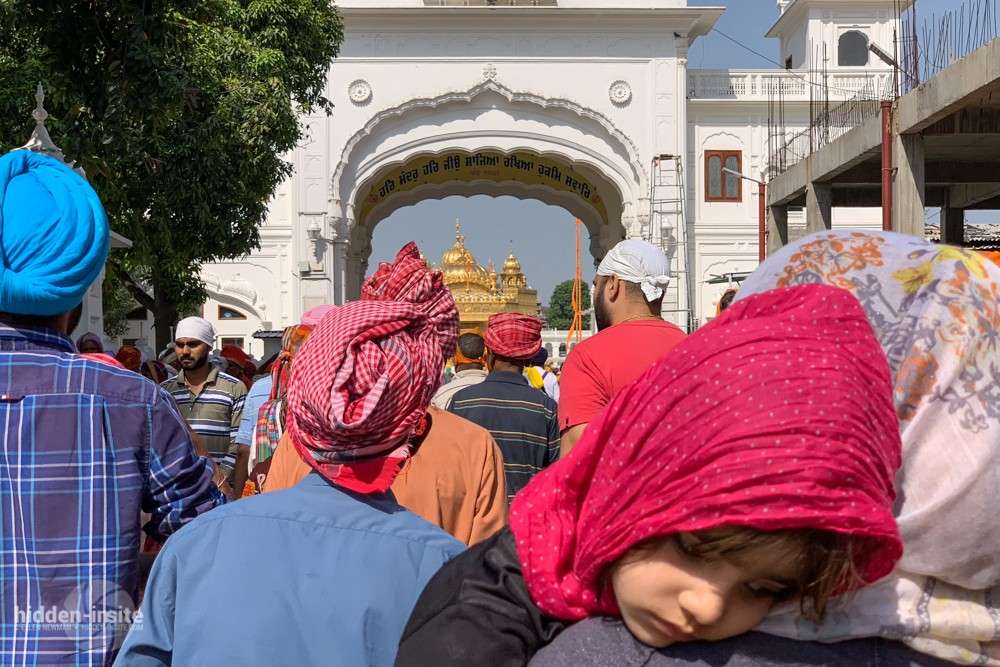 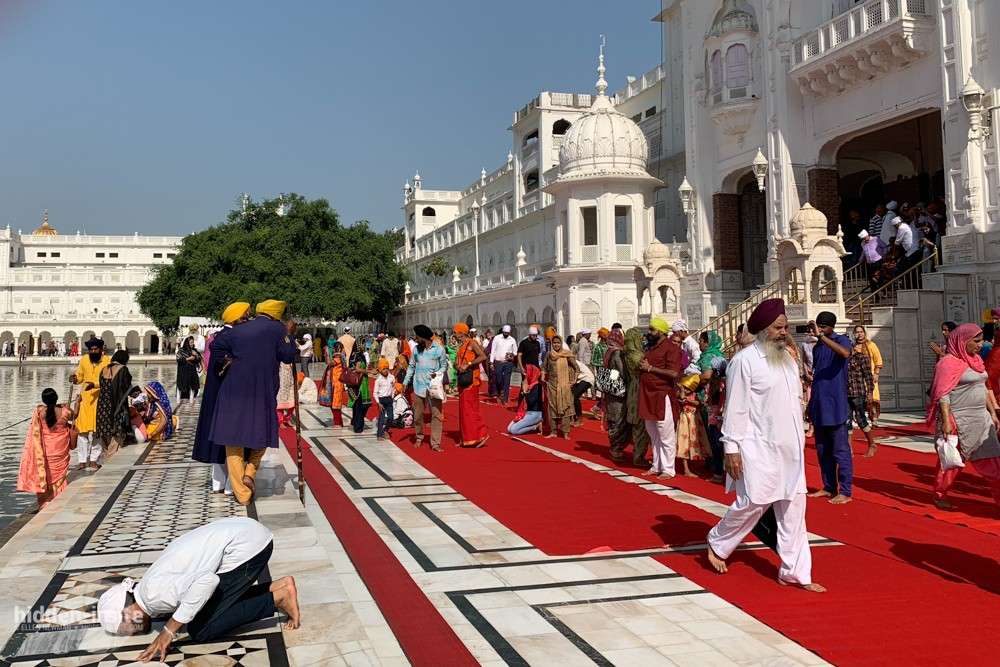 People seem happy to wander around the Golden Temple. Some come to immerse themselves in the pool of nectar. Many stand in line for hours to walk by the holy book. “Every Sikh tries to get here at least once in a lifetime,” explained Sandeep.

Everyplace we went was clean. Red mats lined the promenade to keep people from slipping on wet marble. Guards in white pants, loose blue jackets and yellow turbans are available to assist visitors and keep things calm in case of trouble. 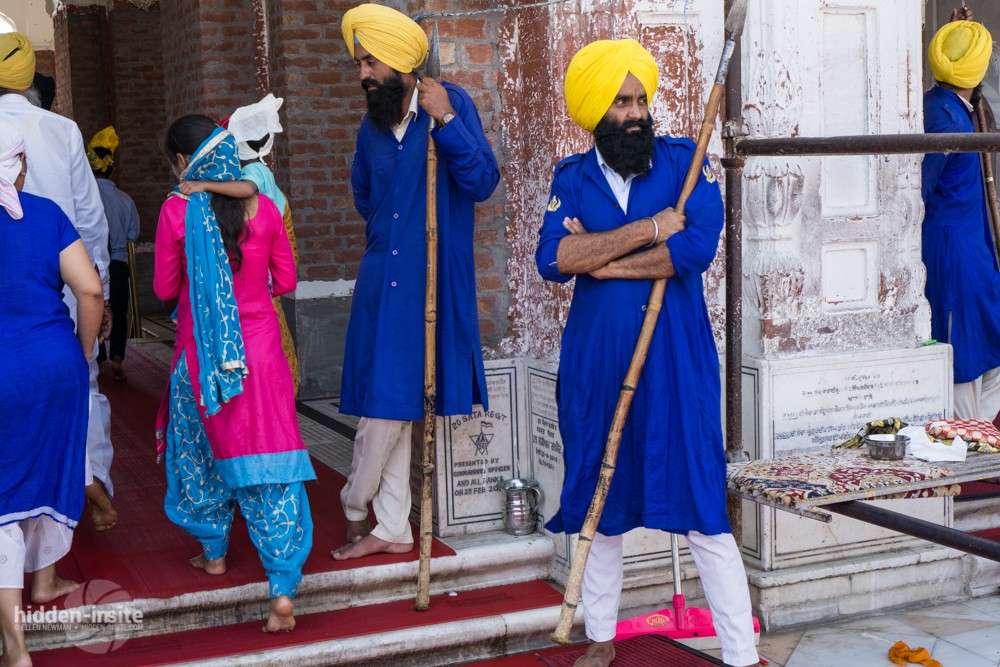 Indeed trouble at the Golden Temple is not unheard of. Originally a dozen watchtowers loomed over the temple grounds, the better to see attacking Mughals across the Punjabi plains. And as recently as 1984, Indian government troops attacked Sikh separatists who had turned the temple into their base of operations. The embarrassing and bloody confrontation with 493 official casualties (some say thousands died) led to the revenge assassination of Indira Gandhi by her Sikh bodyguards.

The Golden Temple at Night 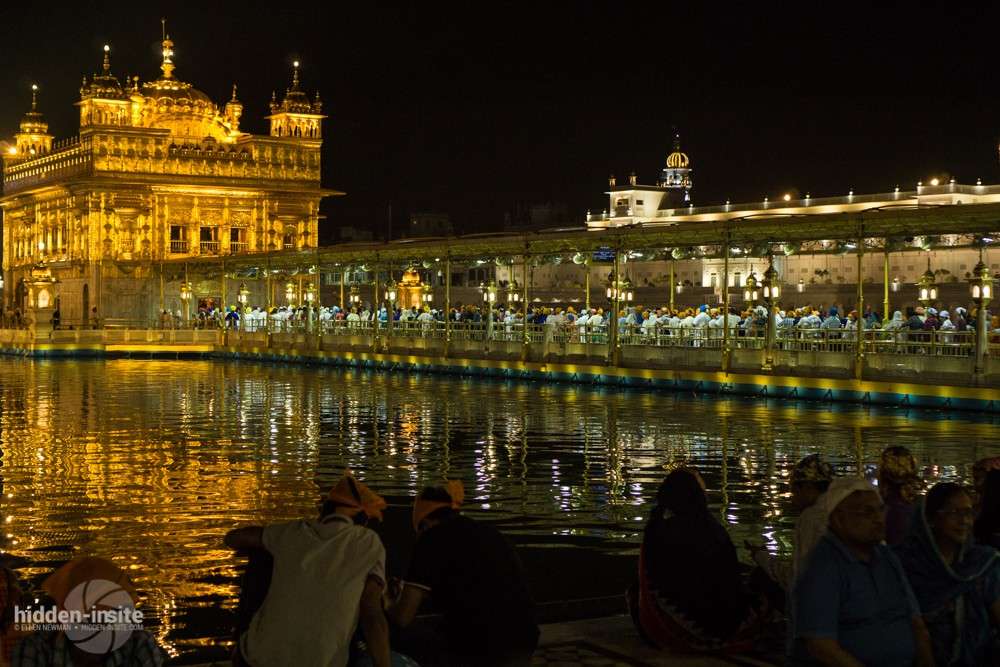 Walking around the pool and watching the reflection of the Golden Temple all lit up was a delight. The air was comfortable, and there were fewer visitors. Some sleep on the large patio outside. Sandeep explained: “Every Sikh temple must have three basic things for the people—water, food and accommodation, all free.” 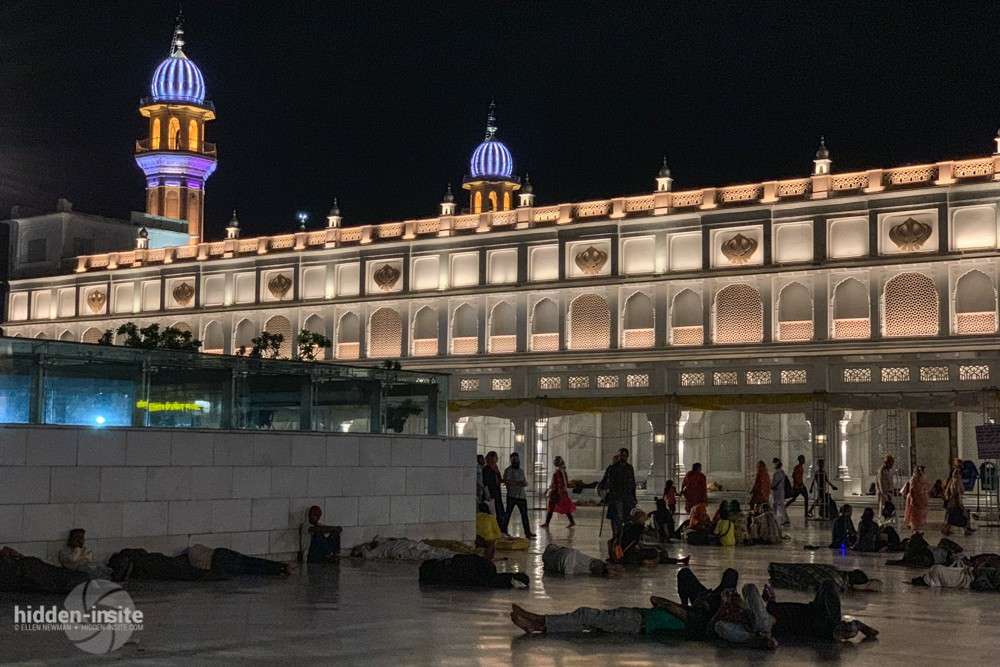 This time we skipped the kitchen and headed over to the lined pathway between the Parliament building and the Harmandir Sahib. That’s where yet another set of volunteers would prepare a golden palanquin to carry the holy book to where it spends the night. 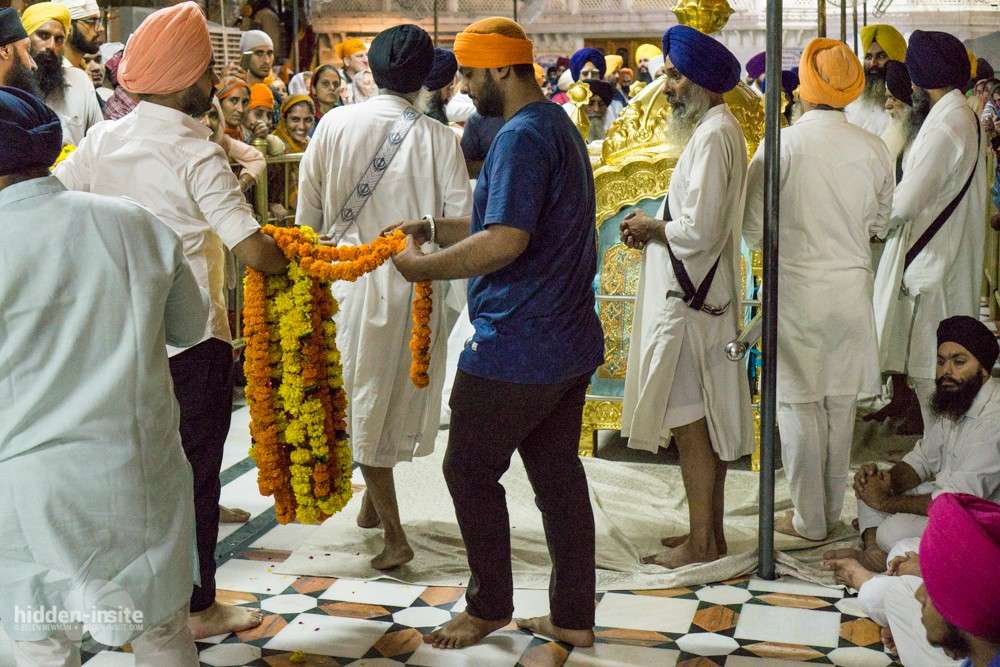 Men in colorful turbans and long white shirts milled around, waiting. Others brought garlands of flowers to drape the palanquin. 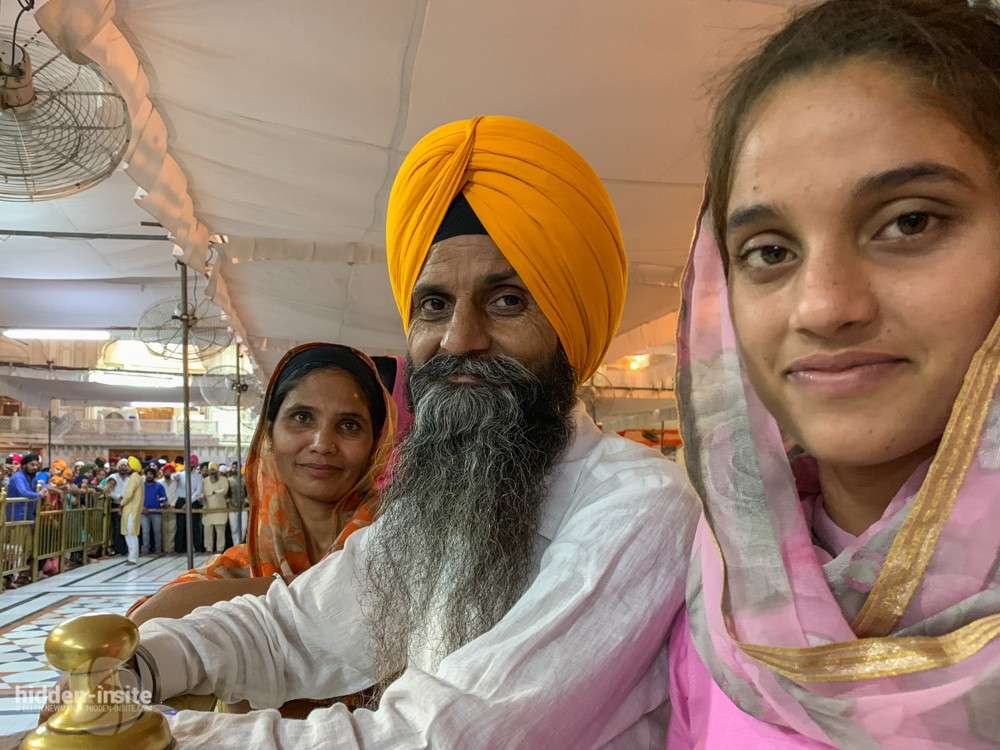 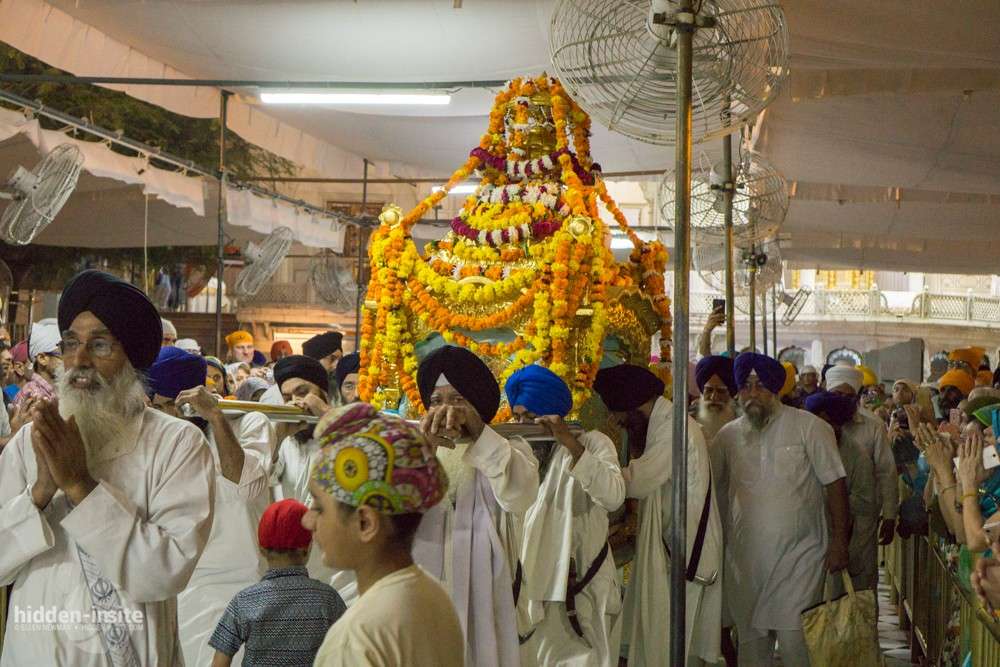 Suddenly a dozen men hoisted the palanquin and carried it slowly inside the Harmandir Sahib. After about a twenty-minute wait they came back. 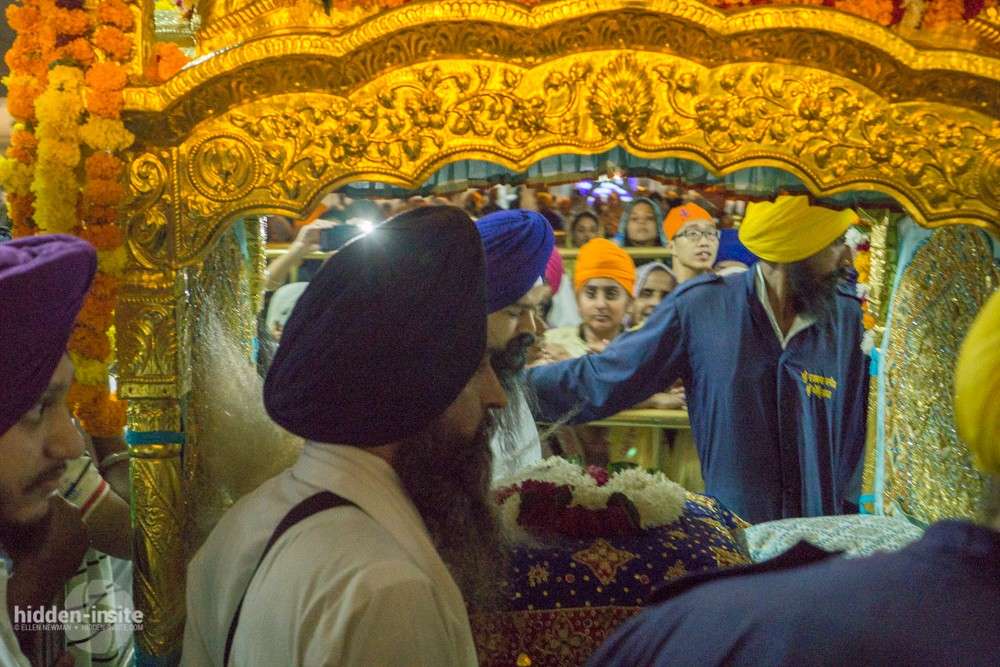 All I could see inside was a blue embroidered pillow topped with even more flowers, presumably protecting the book itself. This time they walked quickly, taking the book for its evening rest.

As the crowd dispersed, yet another group of volunteers started sweeping. A woman carefully picked up flower petals that had fallen to the ground.

Being at the Golden Temple reminded me of a modern Buddhist teaching: after enlightenment, the laundry. Sikhism is a religion designed for householders, not mystics. Taking care of the necessities of daily life—food, water, accommodation—is at its heart.

Check out these two short videos to get an even better sense of our visit to the Golden Temple. It’s a place not to be missed on your tour of India.

And here’s the nightly ceremony for putting the Sikh holy book to bed: