Delhi is too big and too complex to get to know in a couple of days. We were lucky enough to visit twice in two years, which gave us time to explore more broadly. On our second trip we were able to experience Delhi’s dizzying dichotomies more thoroughly. We saw fancy high-rise suburbs grow right near sprawling slums. The constant contrast between rich and poor, old and new, is part of what makes Delhi, Delhi, and India, India.

Another thing that makes Delhi, Delhi, is the contrast between the planned parts of the city and the unplanned. Old Delhi, with its towering mosque and Red Fort, was planned centuries ago by the Mughal emperor Shah Jahan. New Delhi,  with its broad boulevards, stately public buildings and gracious bungalows, was planned top-down during the British Raj. Sanjay Colony and other declared slums, on the other hand, were built bottom-up, topsy turvy, by people who needed housing and needed it quickly.

After the movie “Slumdog Millionaire” became a runaway hit in 2008, “slum tours” became a thing in India. On our repeat trip we signed up with Pradeep Kumar from Delhi by Locals for an inside look at Sanjay Colony, a slum that grew up  in, around and on top of an industrial area on the southern outskirts of Delhi. One of the conditions of the tour is no photos, except in one or two designated places, like the print shop below. 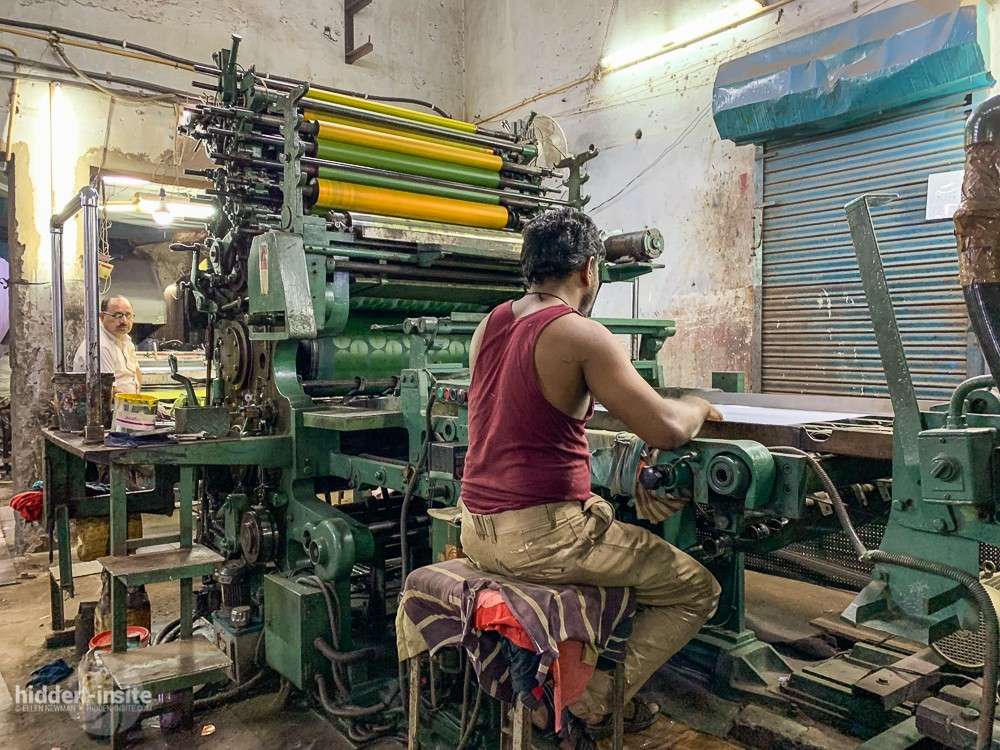 Pradeep introduced us to the area by leading us down a broad street lined with blue tarp canopies on either side. Local women, dressed in colorful, simple saris and shawls from their villages, sat under the tarps, sorting strips of fabric left over from textile manufacturing. They are an essential step in the international clothing trade—recycling fabric remnants to be rewoven into next year’s hot new items. The ladies were on a chai break when we walked by. Several chaiwallas were wandering under the tarps, filling paper cups with tea. I wish I could have taken pictures to share with you.

The word “slum” in India has a specific meaning. It’s an “unauthorized colony” or neighborhood. That means the homes were built illegally on unused land, often government-owned. Since the homes are built illegally, they were not officially hooked into the electrical grid or to water service. Electricity was originally bootlegged in, but now a private electric company serves the area. Tangled wires like these are common throughout the area. 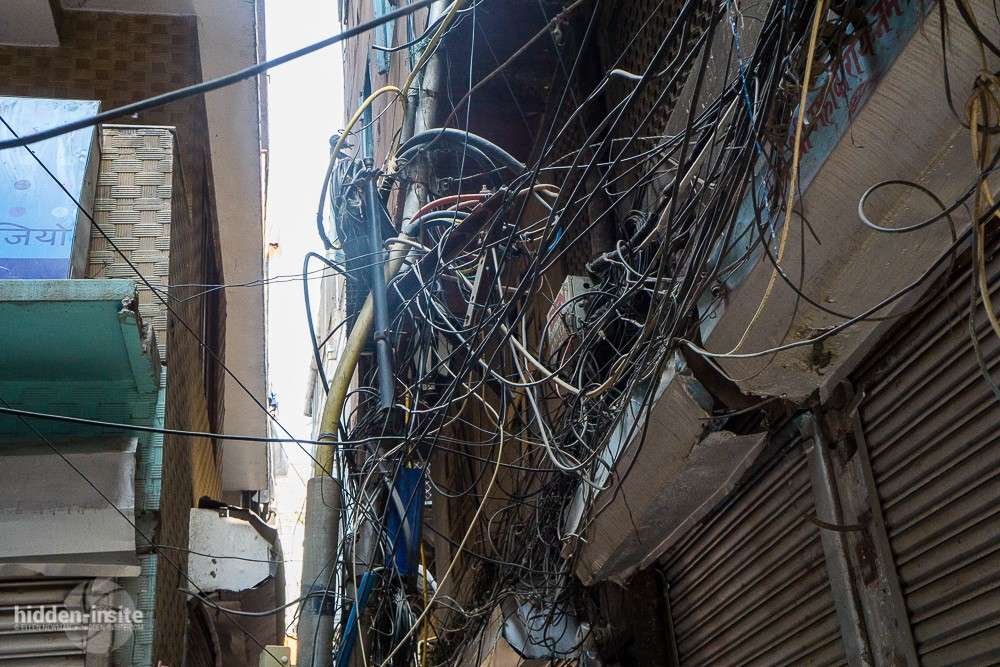 Pradeep explained that 30 percent of the people own their structures and 70 percent pay rent. About 50,000 people live in Sanjay Colony, an area of about 25 acres. Typically they have come to Delhi from villages in the nearby states of Uttar Pradesh and Rajasthan. Although they haven’t traveled far, they are part of a worldwide migration of people from rural areas to cities trying to make more opportunities for themselves and their families. Many are climate refugees fleeing from droughts that have devastated their farms. “They have come to Delhi for a better life,” Pradeep told us.

Still, most people don’t have washrooms in their houses. There are public shared facilities. We stopped at a one-room home, where Pradeep had arranged for us to meet a woman and her young daughter and new baby. The room had a small cooking counter to one side. Sleeping mats, which would fill the space at night, were rolled against the wall. Despite the spare space, there was a flat-screen TV on one wall. Her husband was a rickshaw driver, and her oldest child was at school.

As we wound our way through the narrow lanes of the colony, we visited one of a dozen storefront medical clinics, each of which sees about 100 patients a day. “People have to work when they are tired or sick. Otherwise they won’t be paid. There is lots of competition,” commented Pradeep. “So many people want to work, and there are not enough jobs. If you don’t work properly, you can be easily replaced.”

Pradeep grew up in another neighborhood in Delhi. He learned his English from a local nonprofit about 11 years ago. After teaching there and working in local schools, he earned a scholarship to study hospitality management in the U.S. During his student days, he worked as a student guide to Delhi, a job he really liked. He had an entrepreneurial spirit, encouraging his former company to start a student-run section, Delhi by Metro. He was the program’s first guide.

“I met people from all over the world. For me it was some pocket money. I enjoyed it, and I improved my English skills,” he told us as we wandered past shops and schools in the tightly packed neighborhood. 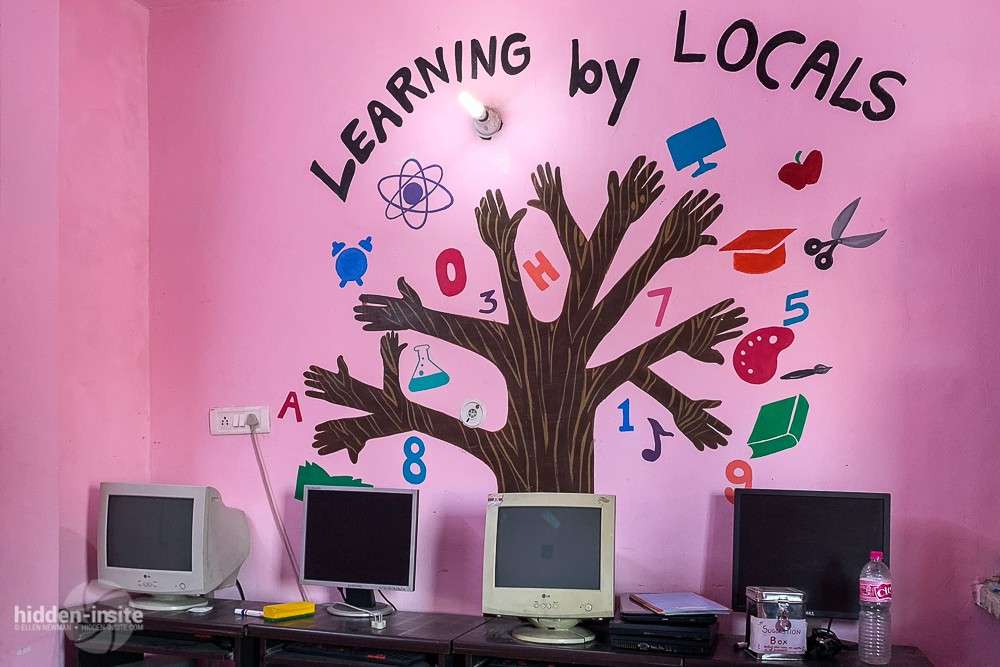 Through several jobs in the travel industry, Pradeep kept coming to Sanjay Colony to help teach English. Eventually he started Learning by Locals, a small NGO that teaches English and computer skills. It occupies a small office in Sanjay Colony. 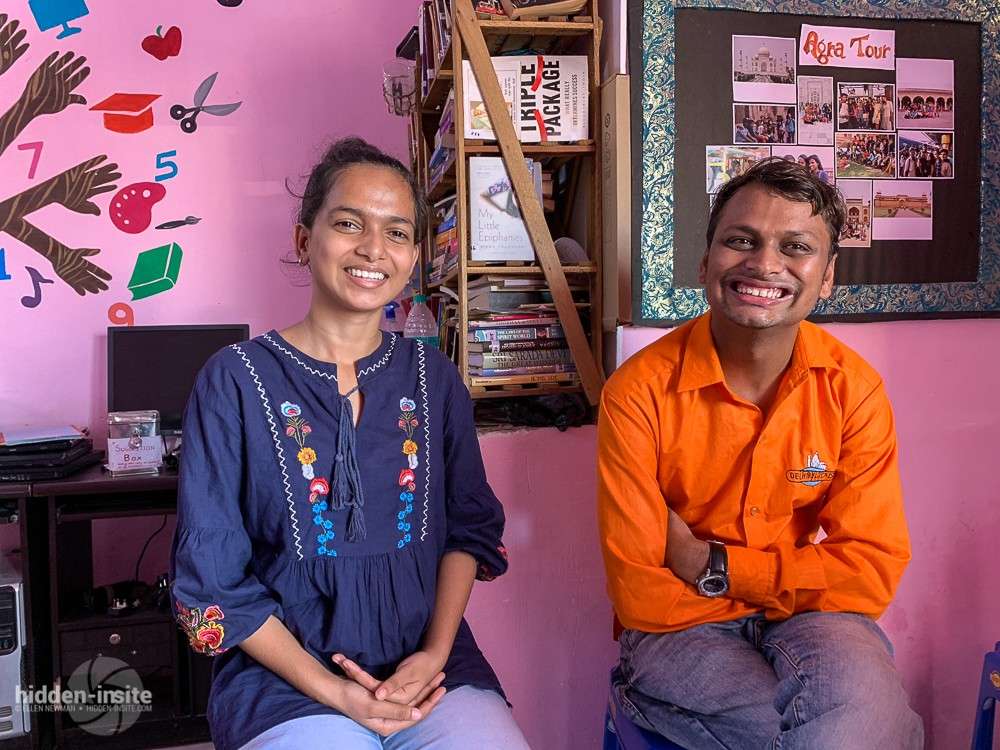 He invited one of his students, Ardita, to join us on the tour. With flawless English, which she says she learned by watching TV and movies, Ardita told us that she is interested in computer animation and filmmaking. We wished her well before we left for other Delhi adventures.

A city of constant contrasts: rich and poor—old and new

As visitors to Delhi, we just took it all in, scene after scene. Sometimes it felt like I was looking at a box of jigsaw pieces that didn’t really fit together. With every piece that seemed like an outlier, I wanted to learn more. But mostly all I could do was to watch the passing parade and marvel at the rich tableau it presented. Here are a few Delhi contrasts to enjoy: 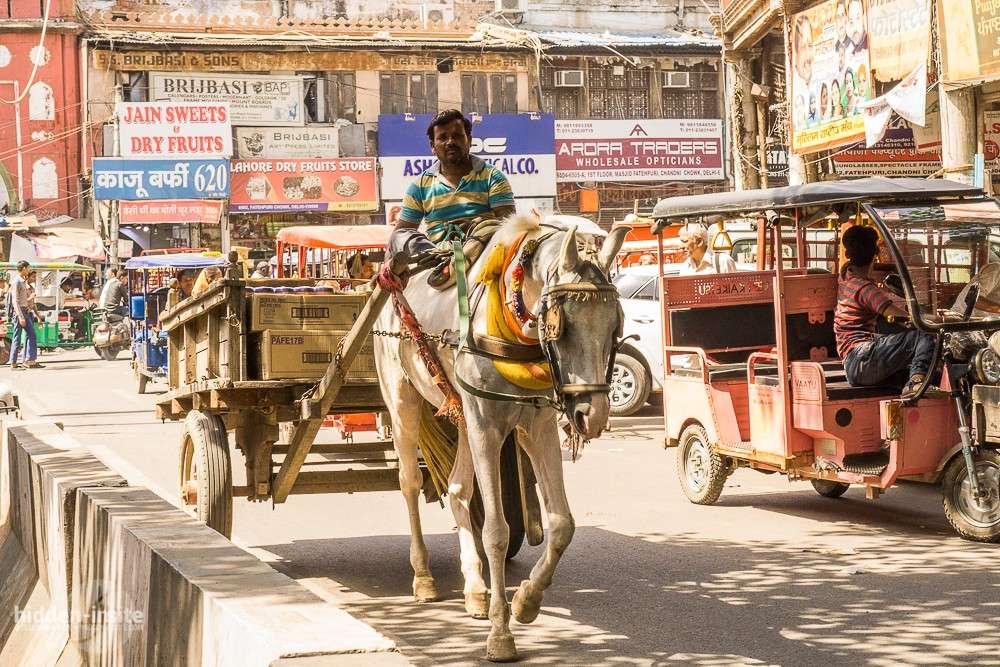 In the old city pedi-cabs and auto rickshaws get most people where they want to go. 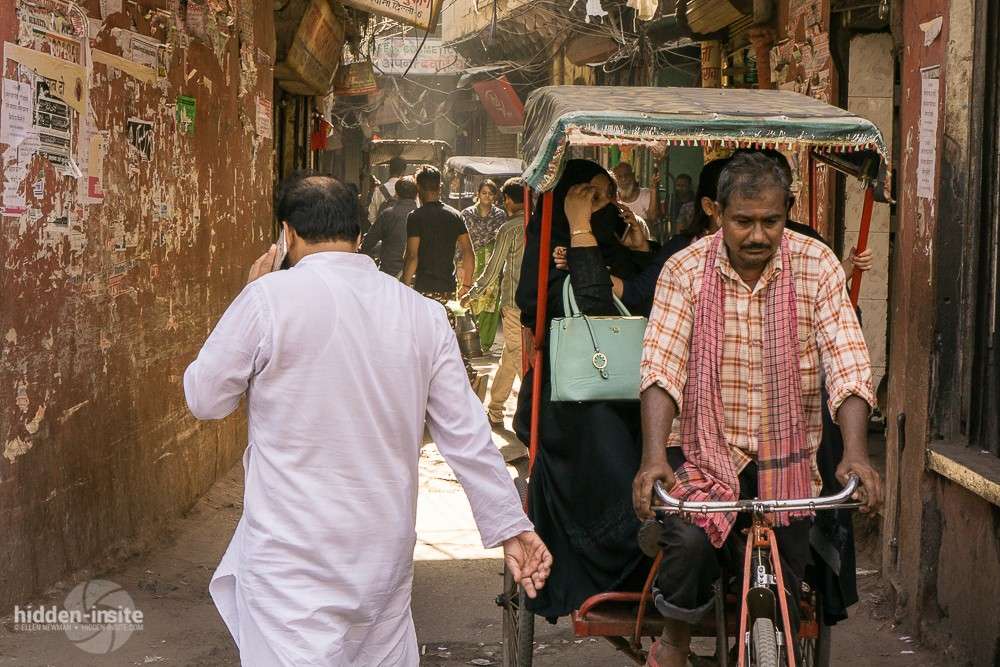 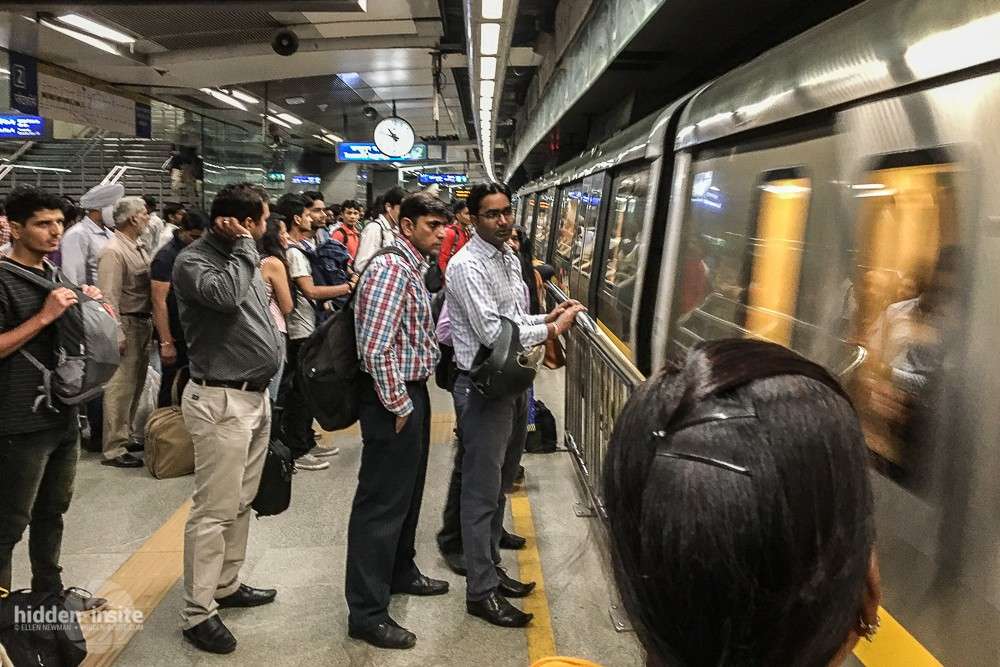 For visitors shopping offers the most obvious contrasts between old and new.

On the street you can buy anything from savory snacks … 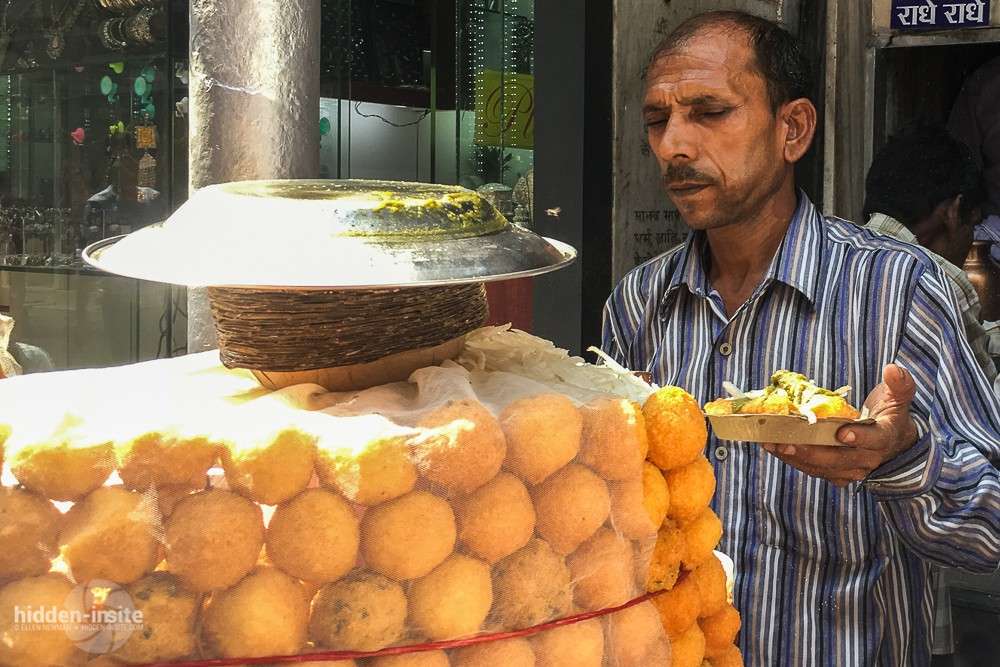 … to popcorn machines (should you be opening a new cinema) … 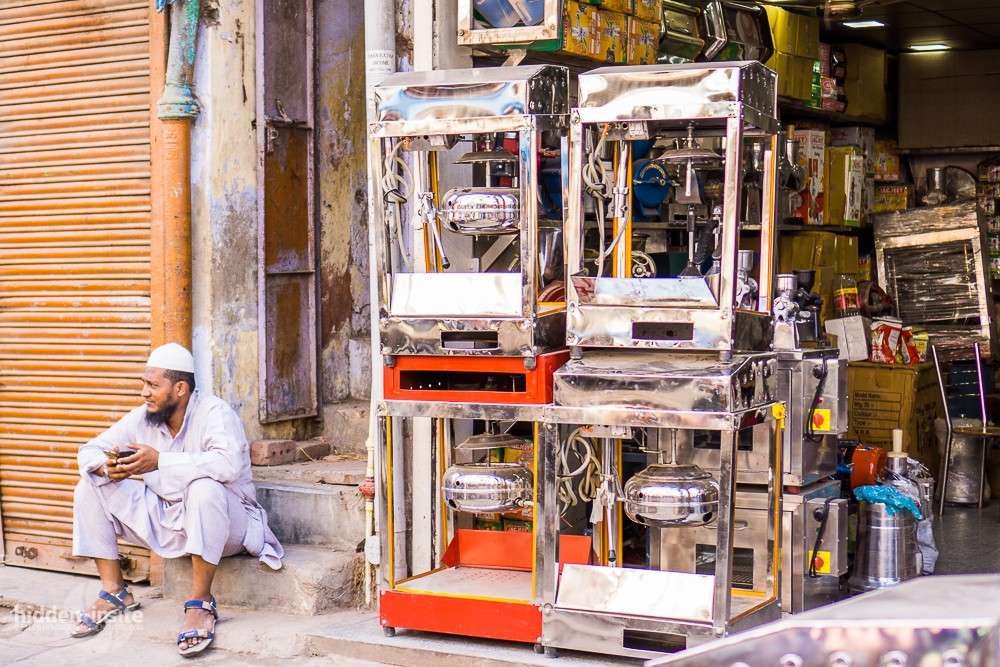 … to spices and grains of every kind … 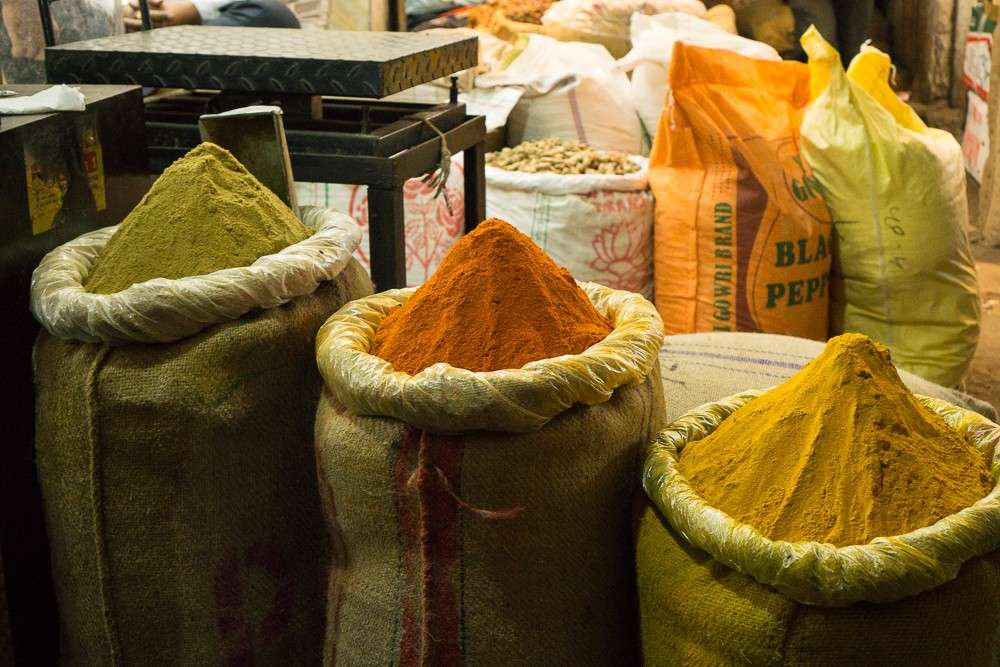 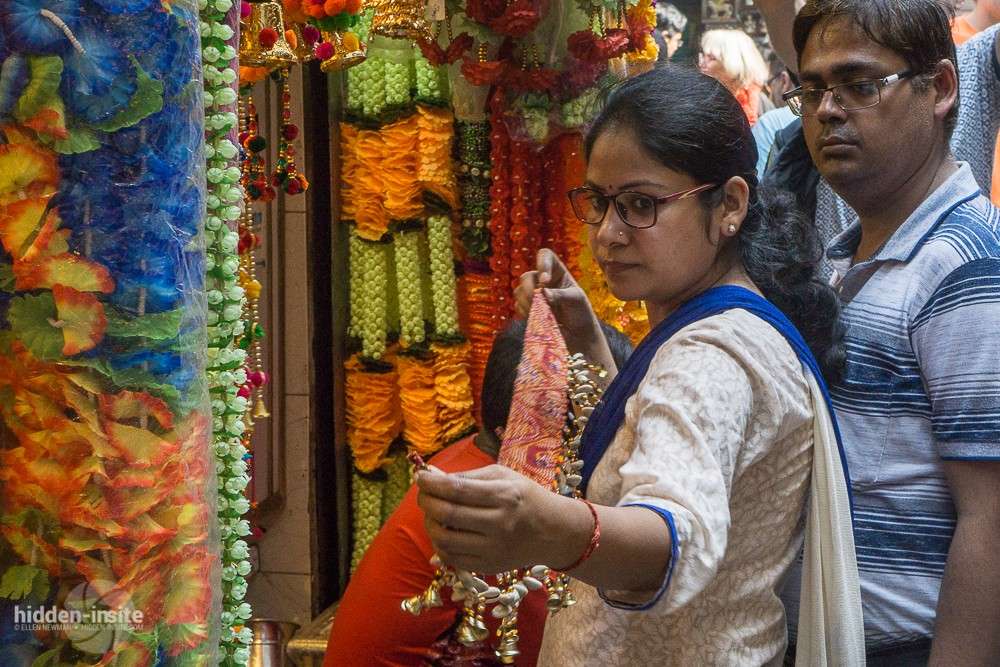 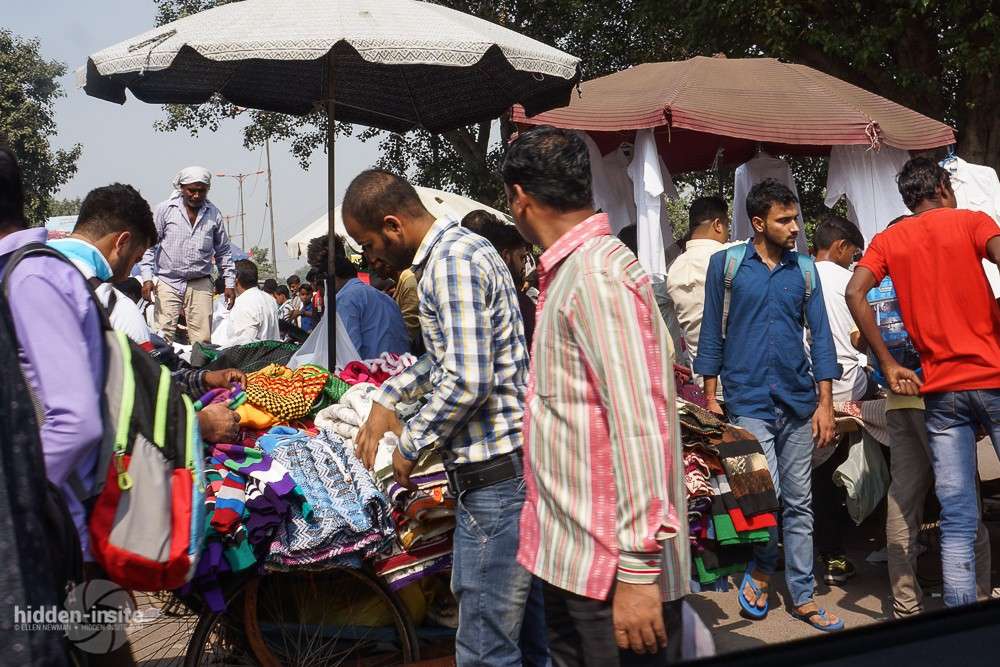 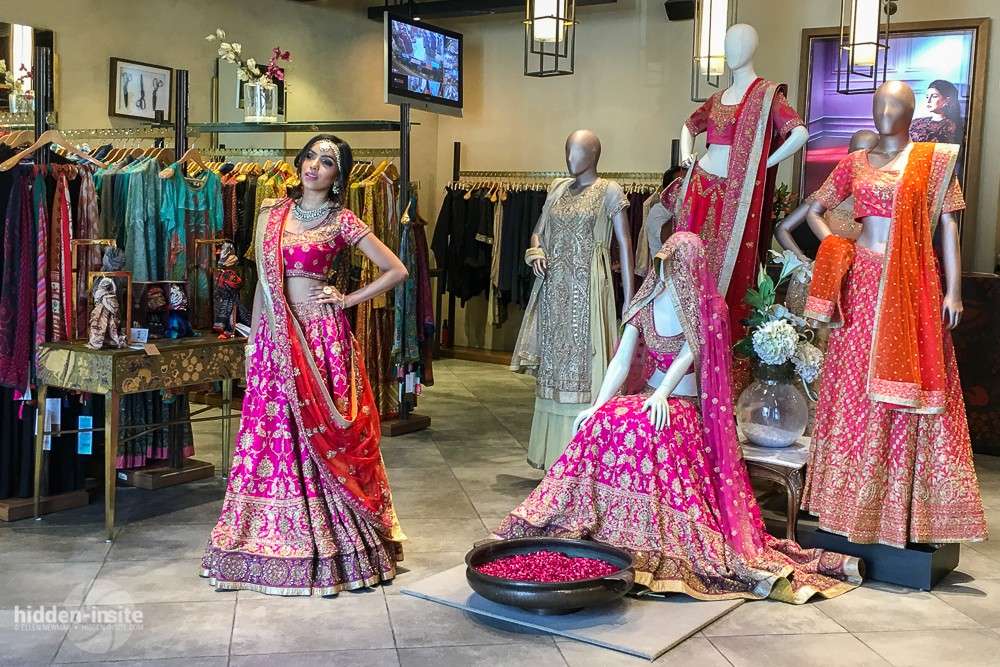 … and people seeking a quieter shopping experience can visit one of the new boutiques. 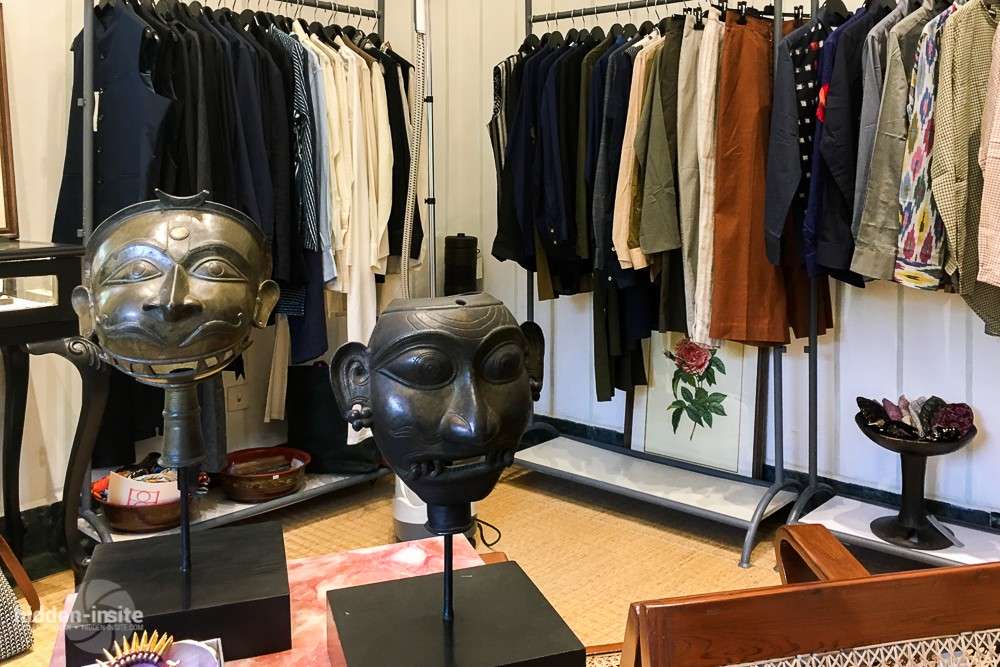 Food is available everywhere in Delhi. 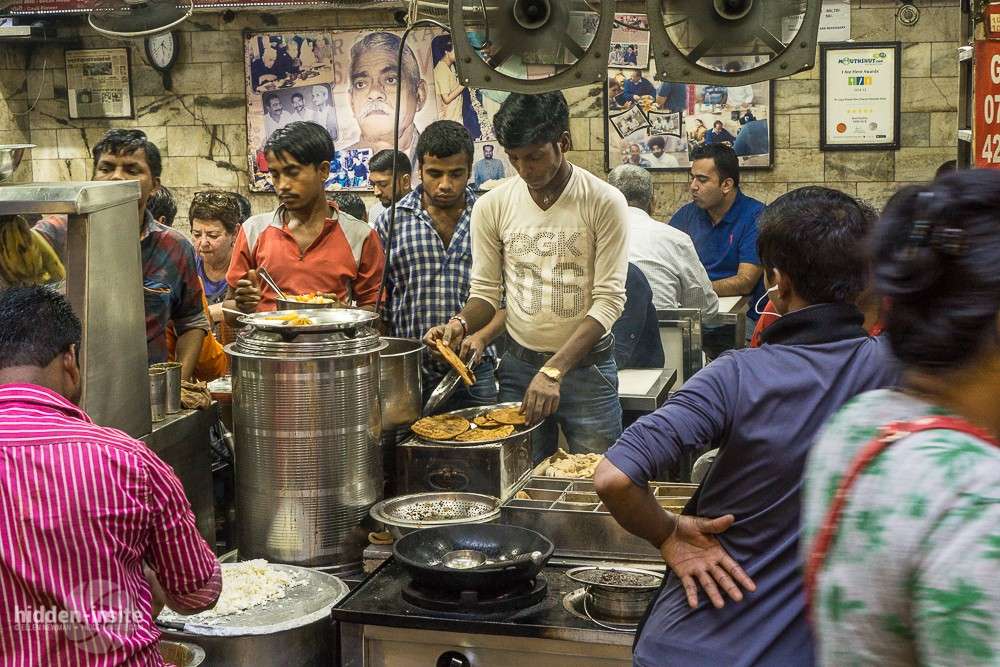 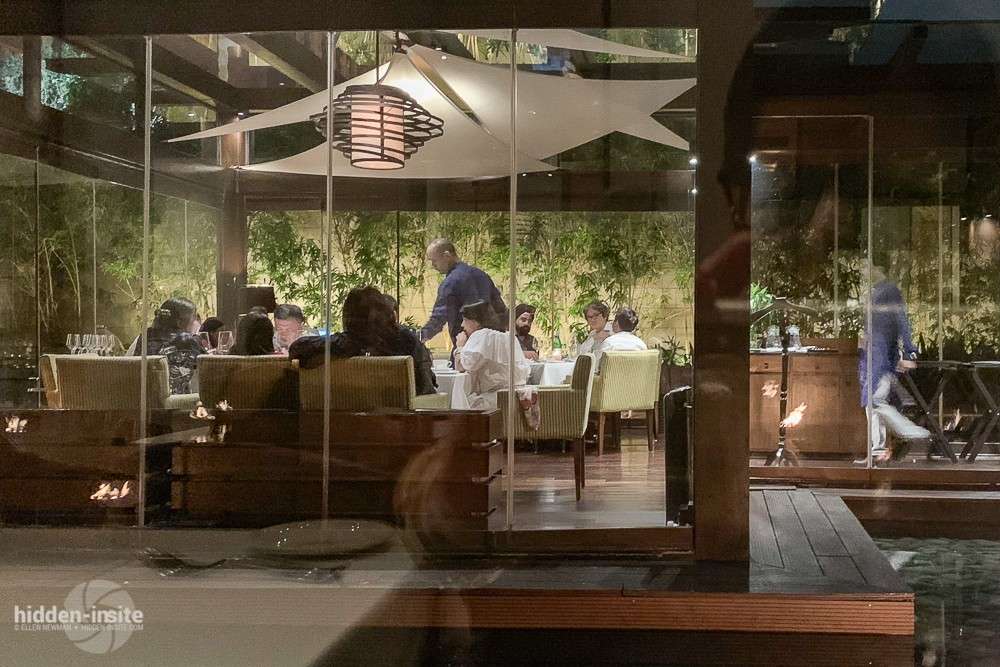 And modern high-end restaurants, like Indian Accent, book weeks ahead.

Six days in Delhi over two visits gave us just a taste of what Delhi has to offer. There are still neighborhoods to explore, temples to visit and food to sample. Perhaps we’ll have another opportunity to do just that.