Medical and Other Adventures in Chennai

“You need a D & C. We have to see what’s going on,” said Dr. Kondammal in a thick Indian accent. I nodded, numb from a virtually sleepless night after an extra-long travel day.

We had flown from Aurangabad to Mumbai and then to Chennai all before noon. After depositing our bags at Chennai’s Taj Clubhouse hotel we set off with a guide to see Mahabalipuram, one of those ancient wonders of Indian storytelling and devotion carved in stone. 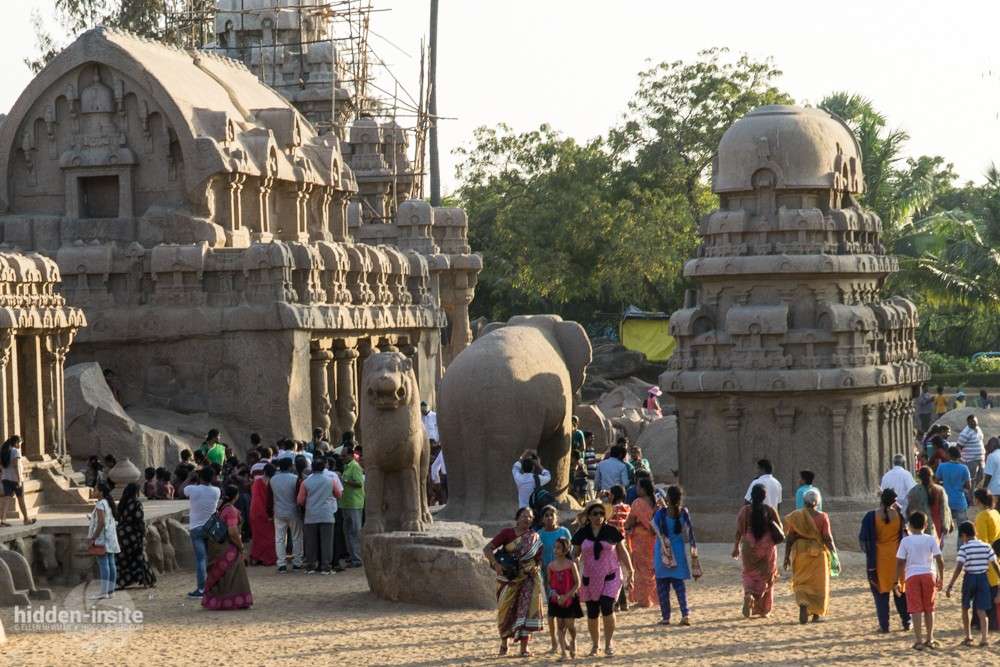 The ancient carvings are now engulfed by a seaside resort town along the Bay of Bengal on India’s southeast coast, where we enjoyed a barbecue jumbo prawn lunch. 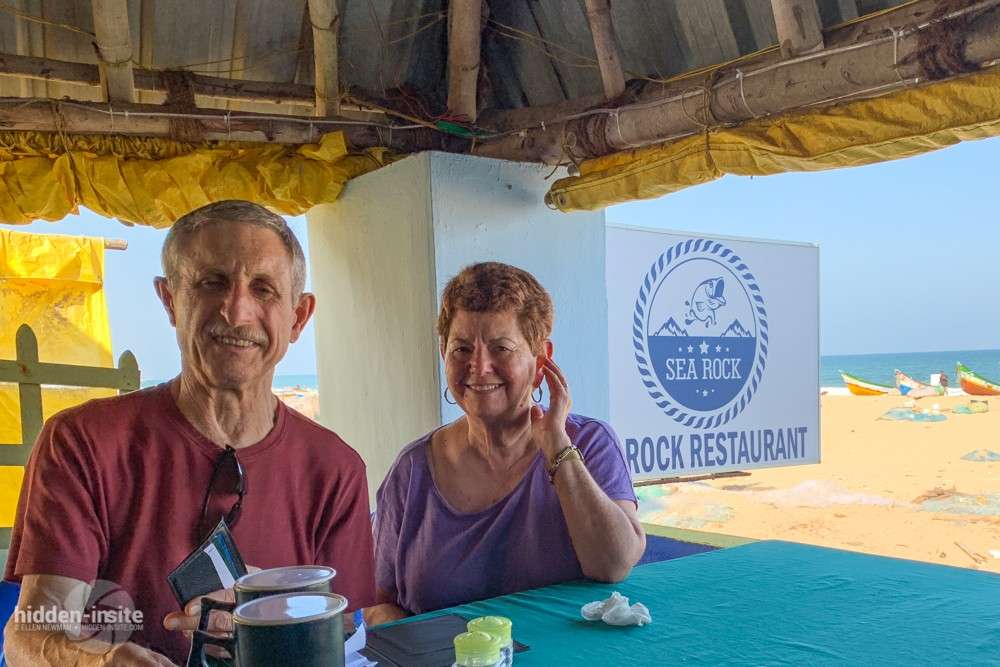 It was a beautiful Saturday in February. The weather was perfect. Traffic was fierce. I was exhausted.

The next day, Sunday, we were to meet photographer Catherine Karnow for her South India Photo Workshop. I had been looking forward to exploring the Indian state of Tamil Nadu with Catherine for at least a year. That night I could barely wait to settle into one of the Taj’s famously comfortable beds. Tomorrow was going to be an exciting day.

About 1 am I woke up to an oddly wet bed. “OMG, it looks like a bloody murder scene,” I gasped to my husband, David. Since it was night in India, it was daytime in California. I called my gynecologist. Thankfully the office called back quickly. “You need to go to the ER.” It was another OMG moment. We were in India, 10,000 miles from home. It was the middle of the night. What now?

David went downstairs to the front desk. It was a Taj, one of India’s—actually the world’s—premiere hotel groups. By the time I was dressed a car and driver were ready to whisk us to the hospital. One of the hotel duty managers came along in case we needed translation help. Off we went to the Apollo Hospital ER, just 10 minutes away. This stop was definitely not on our planned itinerary!

To relax, I tried to focus on what was similar and what was different. I was seen right away. That was unusual. The nurses and MDs were definitely interested in my blood pressure. It was high. Hardly a surprise. I was outwardly calm, but the cuff didn’t lie. They also asked lots of questions about my blood sugar. I guessed that diabetes is a public health issue in India. Speculating took my mind off myself. I calmed down. Slightly.

David filled out the necessary paperwork. The friendly MDs, all speaking perfect English, told me to come back the next morning, Sunday, when the gynecologist would be available between 10 and noon. I was to report to the Apollo Cradle Hospital a few blocks away. “Cradle,” I wondered. Oh, the hospital for mothers, babies and other gynecological issues.

Around 3 am the guys on the front desk welcomed us back to the hotel. The room was spotless. At breakfast Sunday morning the chef offered to make me anything the doctor recommended. “Anything,” he reiterated. I was comforted and amused. Indians believe deeply in the medicinal properties of food. I felt embraced by Indian hospitality. Off we went to Apollo Cradle.

We arrived before 10 to get on the list early. The doctor was not yet in. We settled in to wait. In the meantime pregnant women arrived with family entourages clutching pillows and baskets of food. Eventually an imposing middle-aged woman dressed in a long sari came in and strode purposefully up the stairs. “You can go up now,” the receptionist told us.

Once in Dr. Kondammal’s office we told her the saga. She kindly ushered me into a curtained-off exam area for a quick pelvic. Back at her desk, she told us that I would need a D & C procedure. “I’ll get you in tomorrow so you can get on with your trip. Come back at 7 am. Don’t eat anything because you’ll be getting anesthesia.” Her clear business-like tone gave me confidence. 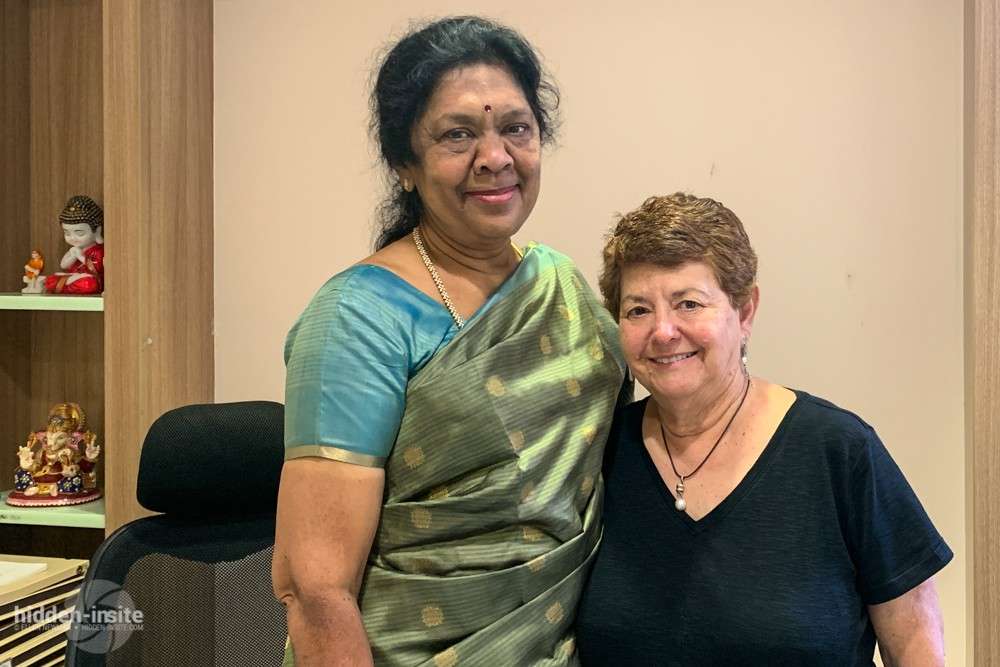 Dr. Kondammal and Ellen during a follow-up visit when we returned to Chennai two weeks later.

I was still tired and definitely anxious, but it was only 11:30. No need to give up our original plans. First there was lunch with two of our son Ben’s international work colleagues. They had never met in person, but spoke often on company calls. That’s one of the upsides of international teams: friends from around the world. 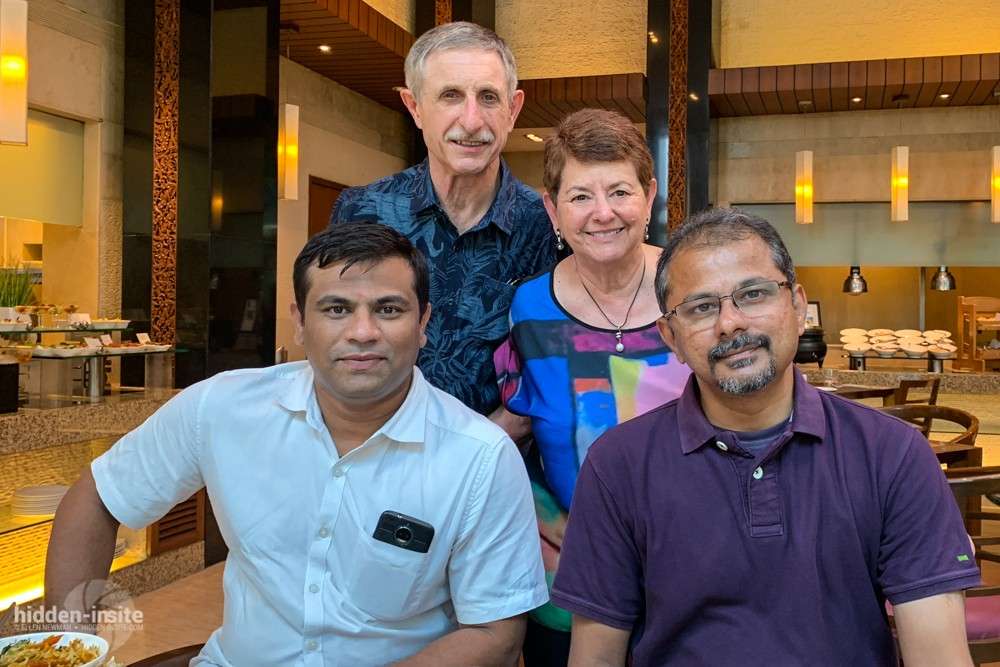 David, Ellen, Belaji and Sundar at brunch at the Taj Clubhouse in Chennai.

We had to scurry from lunch to join our photo group. We met in the hotel bar. But no welcome wine for me. I couldn’t drink anything because of the meds Dr. Kondammal prescribed to stop the bleeding. As I sat there trying to absorb new names and faces, fatigue washed over me.

During introductions, Catherine asked about our goals for the trip. I stammered something. “You want your photos to go from good to wow,” Catherine said, rescuing me. Yes, that’s right, I want to take my photos from good to wow. At that moment I wasn’t sure I even knew how to operate a camera.

And with that, we were off to our first photo group adventure. The dozen of us split up into four auto-rickshaws for a wild ride through Chennai, India’s fourth largest city. David and I went with Tricia Cronin, fellow San Franciscan and Catherine’s co-leader. 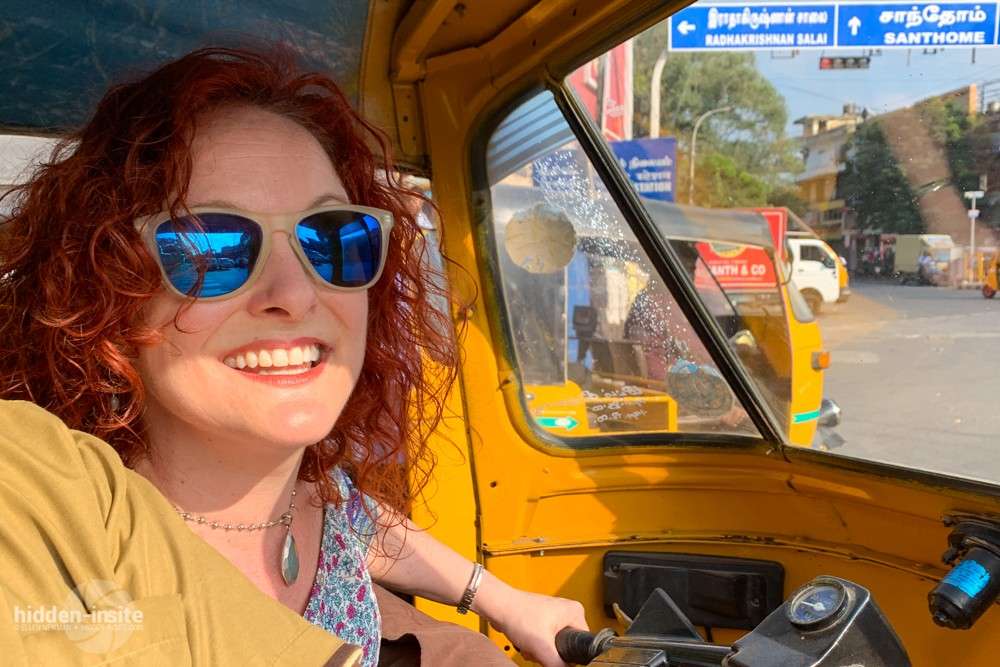 Tricia Cronin behind the “wheel” of our auto-rickshaw in Chennai.

Did I mention that Tricia is willing to try almost anything? She’s an eternal optimist with a warm spirit and infectious laugh. She plunked herself in the front seat right next to the driver. Tricia grabbed the wheel and started steering … and laughing. “I’m driving,” she squealed.

Catherine’s auto-rickshaw snuck up on our right. Click, click went three cameras. It was the paparazzi. Tricia was our star. She and our driver pulled away with gales of laughter. Medical procedure? What medical procedure? Tomorrow was far, far away.

But first there was a warm and gracious introduction to India. Catherine had arranged for us to meet Krithika Subrahmanian, an architect who designed one of the hotels we would stay in later, for a slide show and discussion at her studio and an amazing vegetarian dinner at her beautiful home. 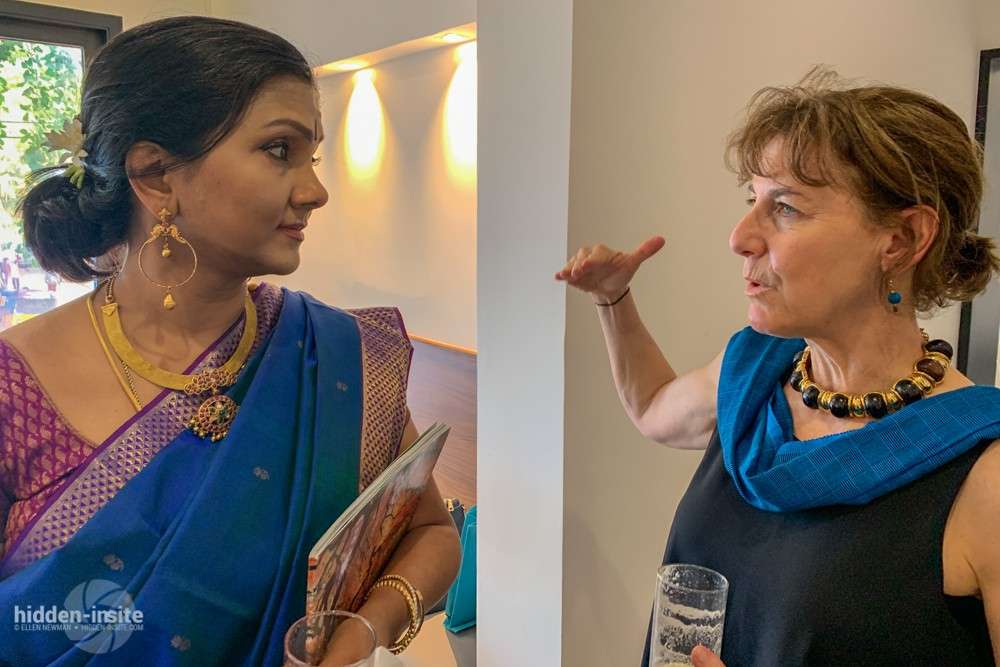 As evening fell, my anxiety wormed its way back. Luckily I was able to take advantage of being with an in-the-know local. “Is the Apollo Hospital OK,” I asked Krithika. “You’ll be in good hands,” she reassured me. 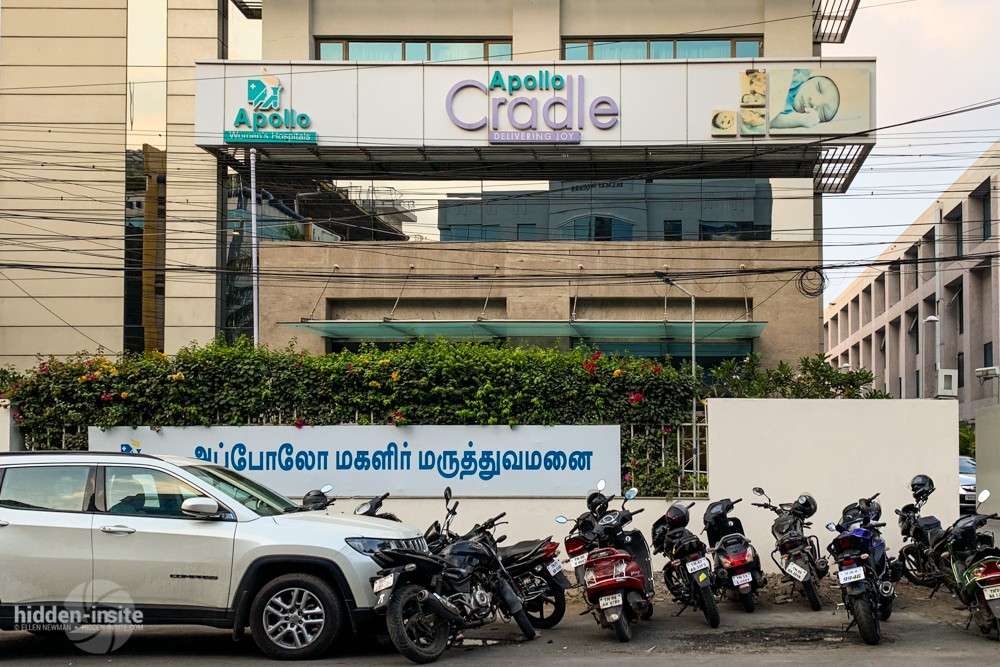 At 7 am we were directed to go upstairs and sit next to Dr. Kondammal’s office door. The waiting room, initially empty, filled quickly as patients drifted in with their families. The big desk in the center of the room became a hive of activity as young women in uniform turquoise saris began directing traffic. Dr. Kondammal’s assistant sent me on a round of individual visits to doctors and techs in offices spaced around the waiting room. The first stop was for height, weight and BP. Then I got an ultrasound, an EKG and finally consulted with the anesthesiologist. “We’ll give you the Michael Jackson drug,” he promised.

It was all amazingly efficient. But there was a wrinkle. My BP was too high. I just wanted to get it done and move on with our trip. What now?

Dr. Kondammal prescribed a pill to move things along. “If you blood pressure is high from anxiety, this will fix it. Come back at 5.”  To get the pill, we had to pay in advance. No billing here, at least for foreigners. We had to pay upfront for everything. David went to the casher’s office to pay and brought an official slip of paper back to the dispensing desk. I took the pill, and we went back to the hotel to rest. We were back at Apollo Cradle at the appointed hour.

About 7 pm, they told me to go up to the third floor for the procedure. David was sent to the admissions desk to fill out even more paperwork and show them my passport. Everything went smoothly until a clerk said, “We can’t admit her. This is the wrong kind of visa.” I was, of course, traveling on a normal tourist visa, not a medical tourist visa. Fortunately a call upstairs to Dr. Kondammal confirmed the emergency. All the protocols were satisfied. Finally!

From then on everything was in Dr. Kondammal’s hands. I stretched out my arm for the IV. The next thing I knew, I was awake and impatient to get back to the hotel and the rest of our trip.

The photo tour was leaving early the next morning for the southern city of Madurai. We delayed our departure for a day to rest and see a bit more of Chennai. We spent a few hours at the Government Museum which showcases a collection of spectacular Chola bronzes dating from the 9th century. 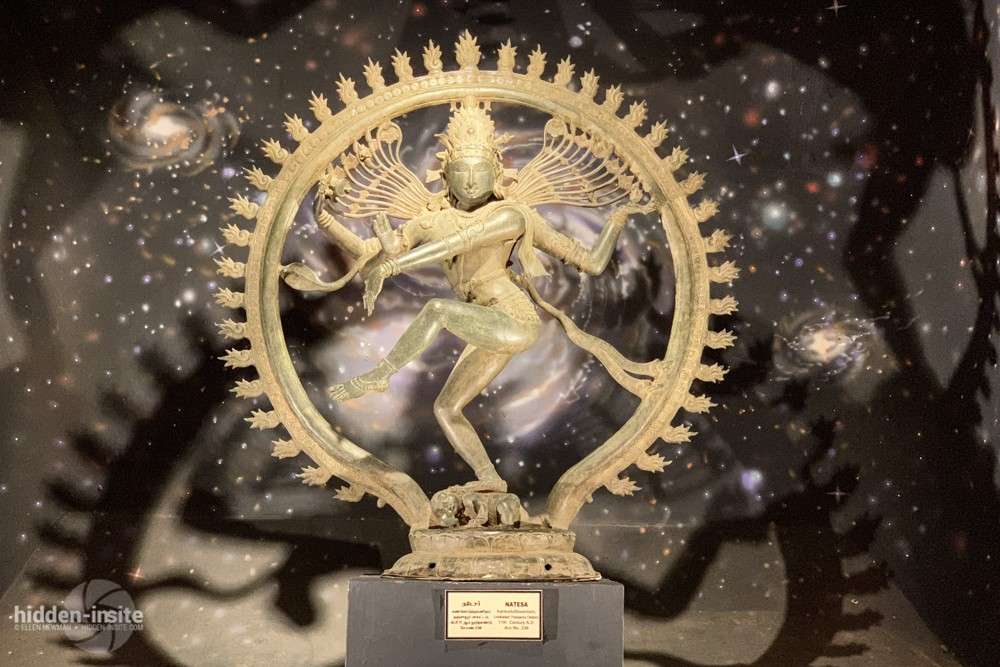 Natesa, a dancing Shiva, one of the spectacular Chola bronzes at the Government Museum in Chennai, India

It would be at least 10 days before Dr. Kondammal would get the pathology report. By the time we reconnected, we had explored much of southern Tamil Nadu and were finally getting into the routine of our photo tour.

“The labs show some anomalies in the cells,” Dr. Kondammal told me matter of factly via What’sApp. “Do we need to go home?” I asked, more worried about canceling the rest of the trip than my medical prognosis. “No, another month won’t make any difference. But see your gynecologist immediately when you get home. You’ll need a hysterectomy.”

I had my surgery at UCSF in San Francisco. The pathology reports were clean, no signs of cancer. When I texted Dr. Kondammal to tell her the good news, she replied a string of emojis: 🙏 🙏 🙏 👍 👍 👌 🌺 🌺 plus a flower-filled get-well card!

So warm. So charming. So Indian.