The tragic fire at Notre-Dame in Paris reminded me that America has a grand Euro-style cathedral of our own in New York City, St. John the Divine. Both St. John and Notre-Dame are imposing structures. Both straddle the transition from Romanesque architecture to Gothic. And both, since the fire on April 15, are unfinished.

Although I’d visited Notre-Dame several times, St. John was new to me. When I started collecting stories for Hidden-inSite, I asked my cousin Robert Leighton to suggest a “hidden” treasure to explore. On a sunny summer day we met at 112th Street in Morningside Heights near Columbia University to tour the Episcopal Cathedral Church of St. John the Divine. 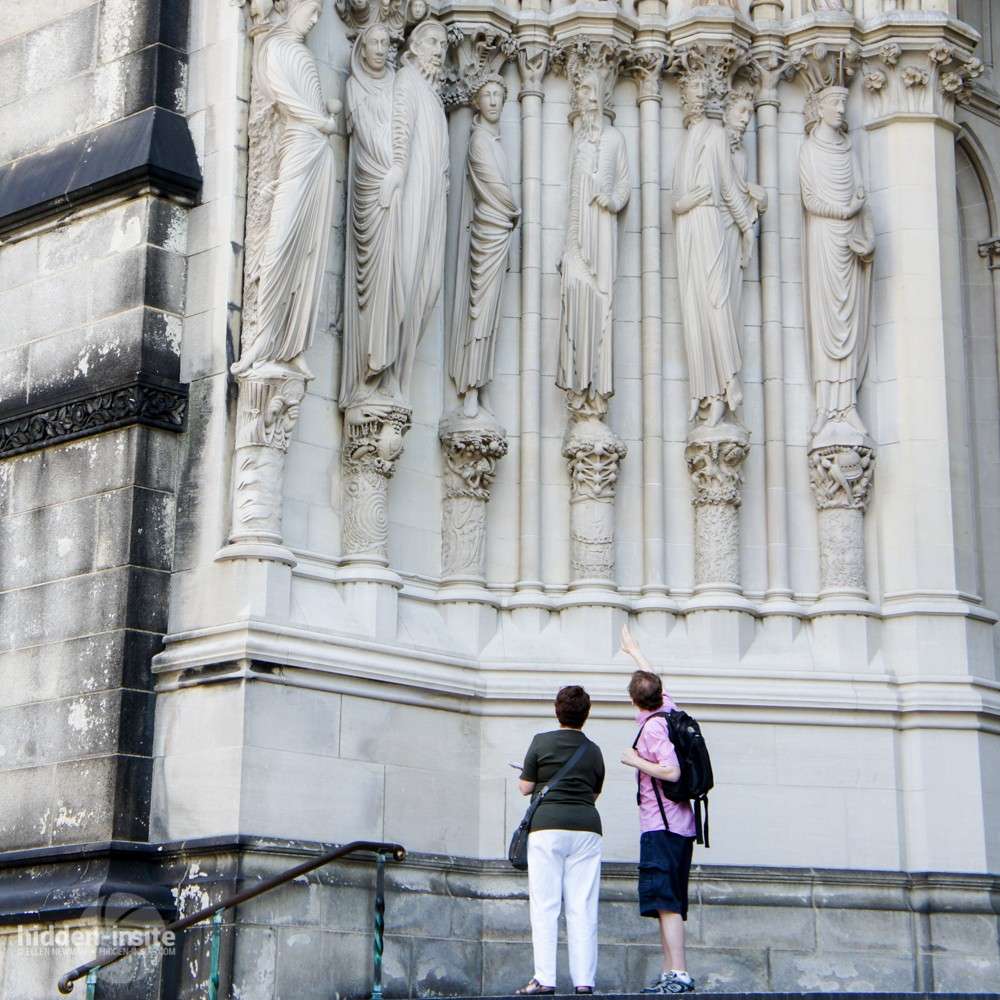 “It’s in a wonderful part of New York, and most visitors don’t get a chance to see it,” he said when we got off the subway. “It’s one of the largest cathedrals in the world. It looks medieval, but of course it’s not old. It’s not even finished. In fact, they call it St. John the Unfinished.” Like Sagrada Familia in Barcelona, St. John has been under construction for more than a century.

“What I want to show you in particular is something that’s easy to miss, and that’s all the modern references hidden in this ancient-looking building,” explained Robert, a writer, illustrator, New Yorker cartoonist and one of the co-founders of Puzzability, a company that writes puzzles for newspapers, magazines, TV shows and companies that are household names. Clearly, our visit to St. John was going to be something of a treasure hunt.

A view from the streets of New York

Looking across Amsterdam Avenue between 110th and 113th Streets, St. John’s presents a massive, even forbidding face. It’s perched at the top of a flight of wide steps atop one of the highest hills in Manhattan. Looking up one notices a squat, square, unfinished tower on the south side, but no matching tower on the north. 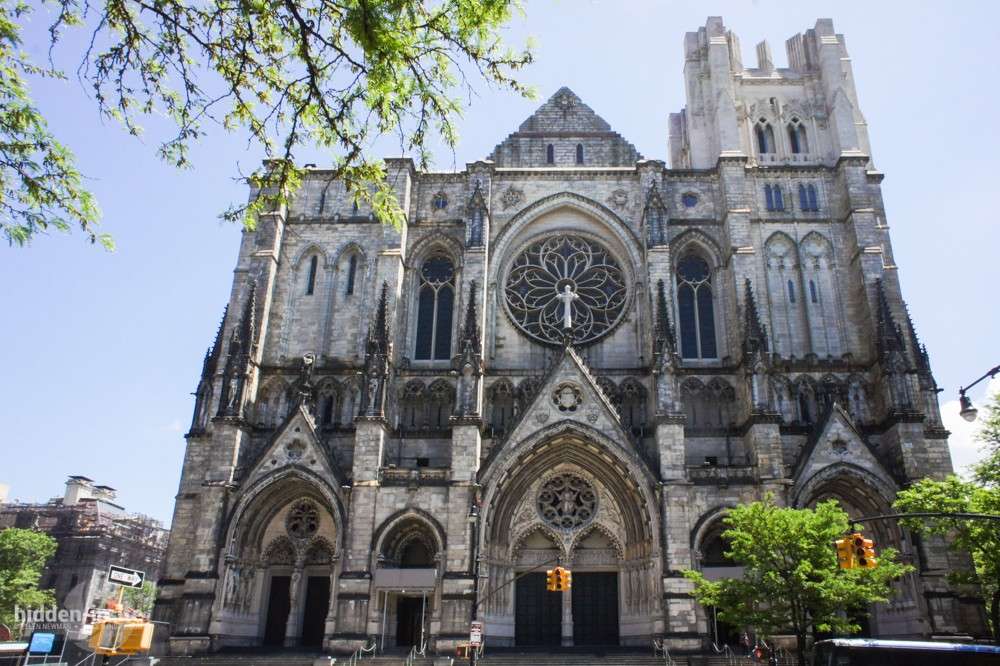 From the street it’s hard to comprehend the cathedral’s true size – 601 feet long, the equivalent of two football fields and more than 40 percent longer than Notre-Dame. The initial architects, George Heins and Christopher Grant LaFarge, started work in 1891, designing a Romanesque Revival building.

In 1911, with the cathedral only partially finished, Heins died. Architect Ralph Adams Cram was hired to complete the work. There was just one problem. Ralph Cram had a different vision for St. John. His style of choice: Gothic Revival, not Romanesque. Grafting Cram’s vision on top of the original Romanesque footprint meant lengthening the nave to create the Gothic proportions he sought, leading to the cathedral’s enormous length. 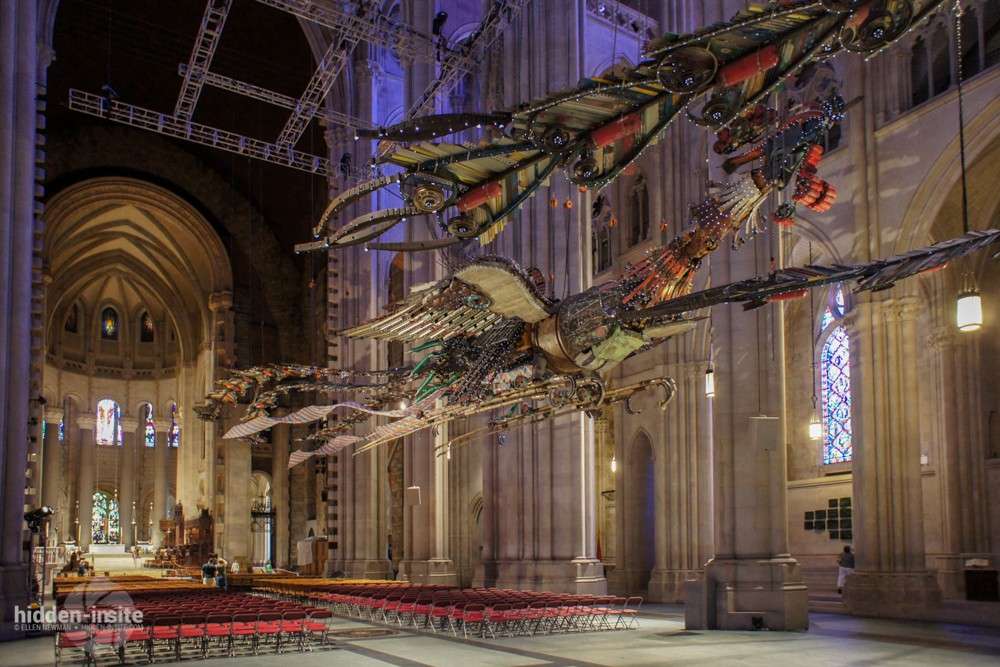 The interior of St. John the Divine is 601 feet long, one of the world’s largest cathedrals. The Phoenix sculptures by Chinese artist Xu Bing, each about 100 feet long, don’t begin to fill the space.

Initial work on the cathedral proceeded from 1892 to the beginning of World War II, when work was suspended to put money into social programs. Construction resumed in 1979 when New York City was flush with a new round of real estate wealth.

The first mystery spot Robert showed us was the Portal of Paradise, the massive entrance facing Amsterdam Avenue. A series of immense sculptures at the top of the stairs flank bronze doors leading inside. The double doors’ 60 panels depict scenes from the Old and New Testaments. They were cast by Barbedienne of Paris, the same metal foundry that cast the Statue of Liberty. 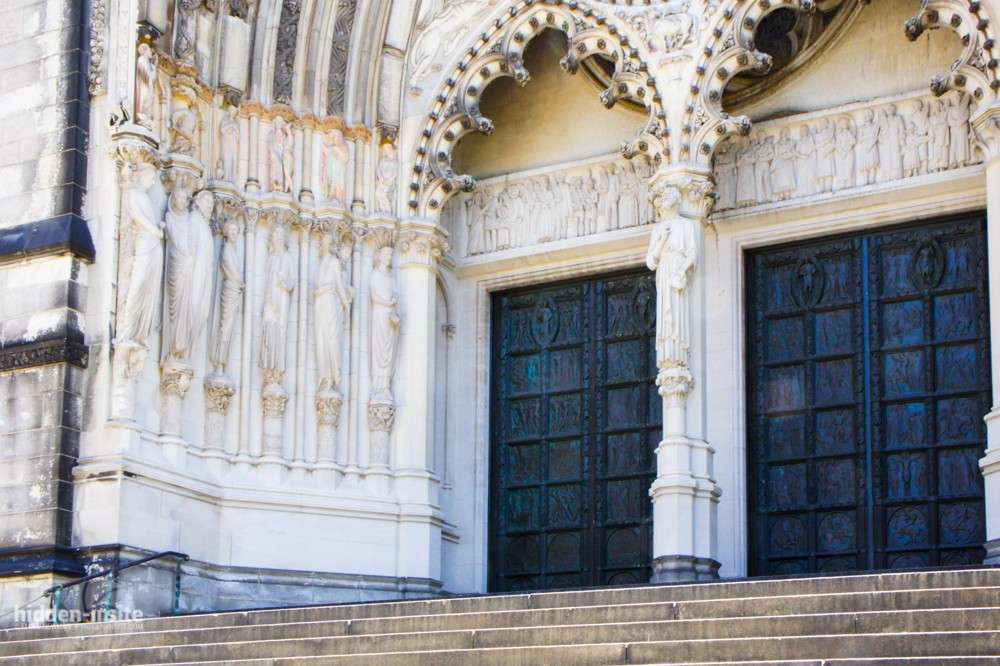 It was neither the doors nor the rose window above – 40 feet across with 10,000 pieces of colored glass, the largest in the U.S. – that really caught our attention. Instead our eyes were drawn to the images hand-carved into the pillars surrounding the entry in a visual embrace. Each of the dozen Indiana limestone pillars consists of one or two figures standing on a plinth or base, topped by smaller figures, which have been delicately tinted in rainbow hues. 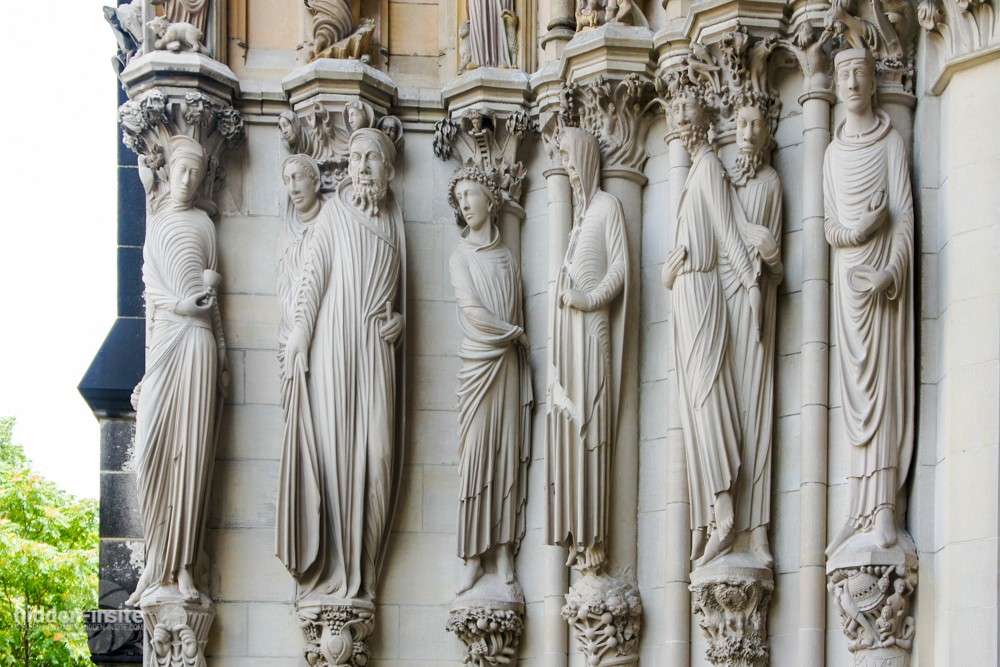 On the north side you can see Old Testament figures Melchizedek, Abraham and Sarah, Jacob, Moses, Elijah and Elisha, and Samuel.

The pillars — a procession of biblical matriarchs and patriarchs — were carved in place between 1988 and 1997 using traditional stone-carving tools and techniques by a team of carvers, many of whom were apprentices from the neighborhood. Artist-in-residence Simon Verity led the team. 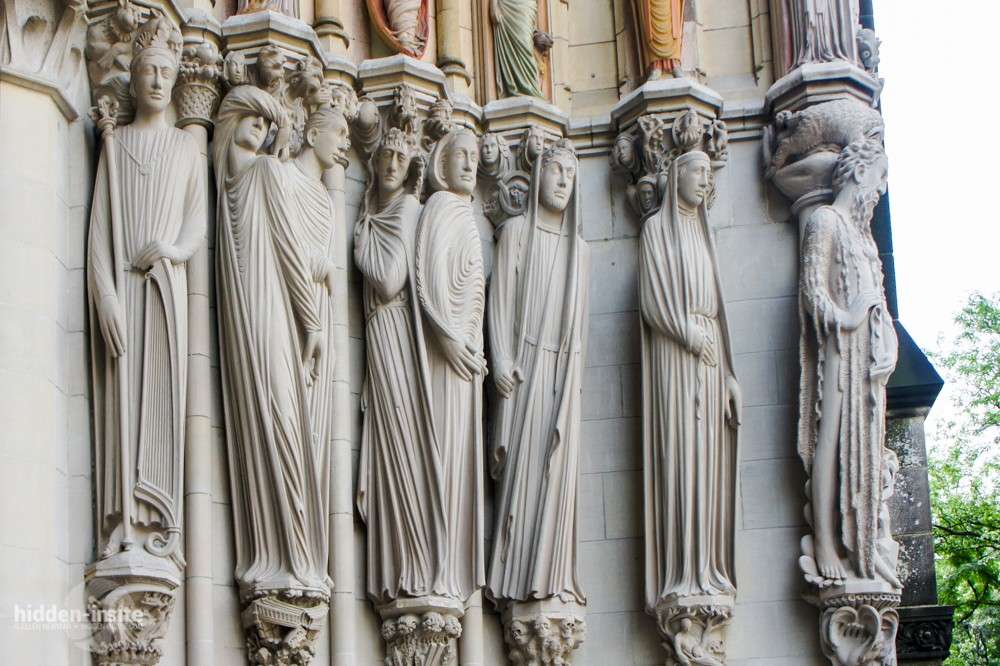 On the south side visitors can see David, Amos and Hosea, Isaiah and Jeremiah, Ezekiel, Elizabeth, and John the Baptist.

Simon fell in love with stone during his boyhood in England’s Cotswolds. He had a deep apprenticeship cleaning 12th and 13th century statues on loan to a local cathedral, and he worked at Canterbury Cathedral. New York was not on his horizon.

“I’d never been to America,” Simon recalled about being recruited to St. John. “OK, I’ll come for a week,” he told the headhunter. He came and was impressed by what the apprentices, the disadvantaged young people, were doing as part of St. John’s social justice mission. “I was very moved by what they were trying to do. It stabilizes people to work in stone.”

Standing underneath the Portal of Paradise, we craned our necks as we deciphered what we were looking at. On one base to the north of the doors we saw the symbol for the Kabalistic seiferot, a menorah and the Hebrew letters that stand for the name of God. “Is that figure Moses?” we wondered. Turning our gaze back to the plinth below, we noticed a staff that morphed into a snake and links of chain, some broken, looped around the pillar. The chains of slavery, we guessed. We finally realized we were looking at Exodus as interpreted on an Episcopalian cathedral. Interesting. 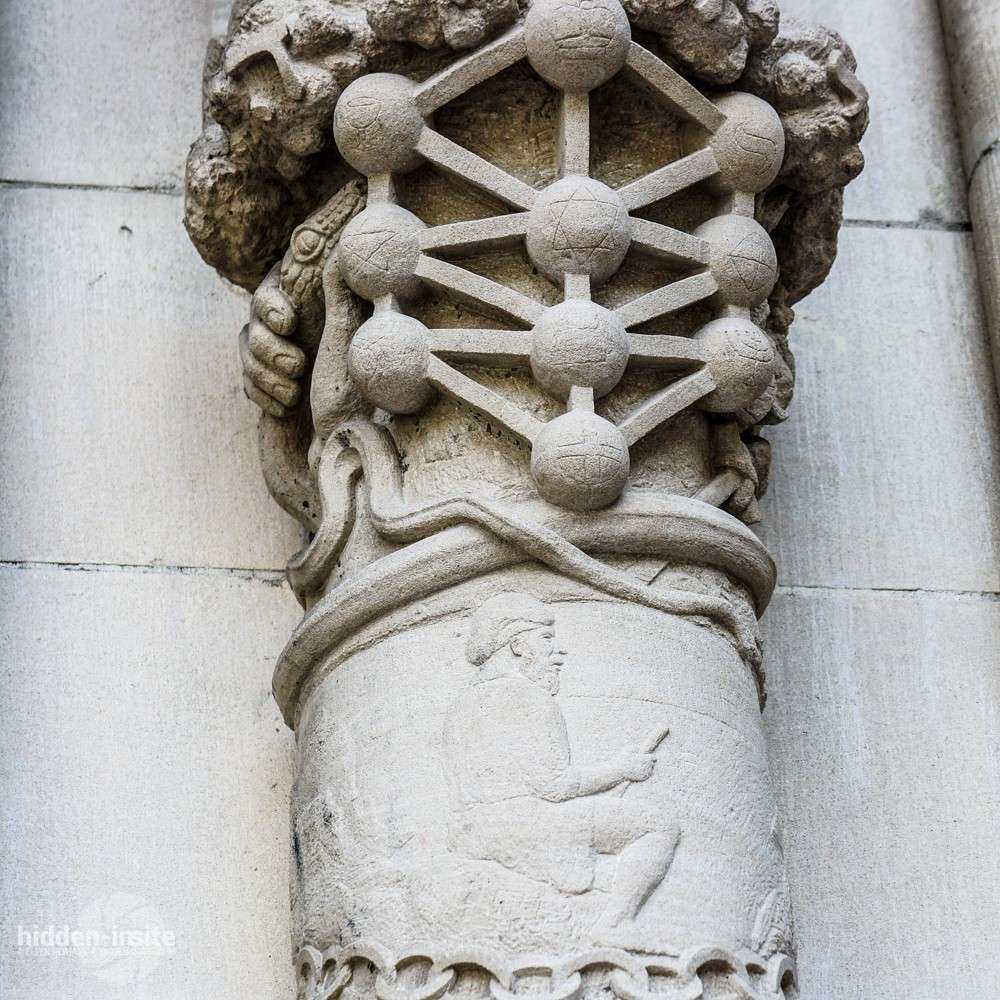 In digging deeper into the mysteries of St. John, I discovered that Amy Brier, a Jewish woman with a BA in fine art and sculpture who trained in Italy, carved the pillar supporting Moses. She included imagery from the Kabala, a tree of life and other icons that complemented the Moses story. “Moses turned a staff into a snake. It was magic,” Amy said. She also found a reference that connected Jesus to Moses that inspired the hand holding the snake.

“As a young woman interested in carving, working at the cathedral was an opportunity I did not want to miss. While my Jewish background did not jibe with Christianity, the Episcopal Church’s tolerance, inclusivity, charity and message of love resonated with me,” explained Amy. “The stone yard was primarily a training and employment opportunity for local disadvantaged people. I was one of a few educated white people who were qualified to do the carving. It was an honor and privilege.”

I asked Amy if the leadership at St. John approved the images chosen by the carvers. “We all had the freedom to figure it out. We just talked about our ideas, but it was all OK-ed by the church.”

As Simon explained, the dean of the cathedral, James Parks Morton, his colleague Minka Sprague and a rabbi they included in the conversation were very involved at the beginning. “They were really supportive of what we were doing. We would run our ideas through them. If the ideas were theologically sound, connected to the statues above and interesting, we could move ahead,” he recalled. 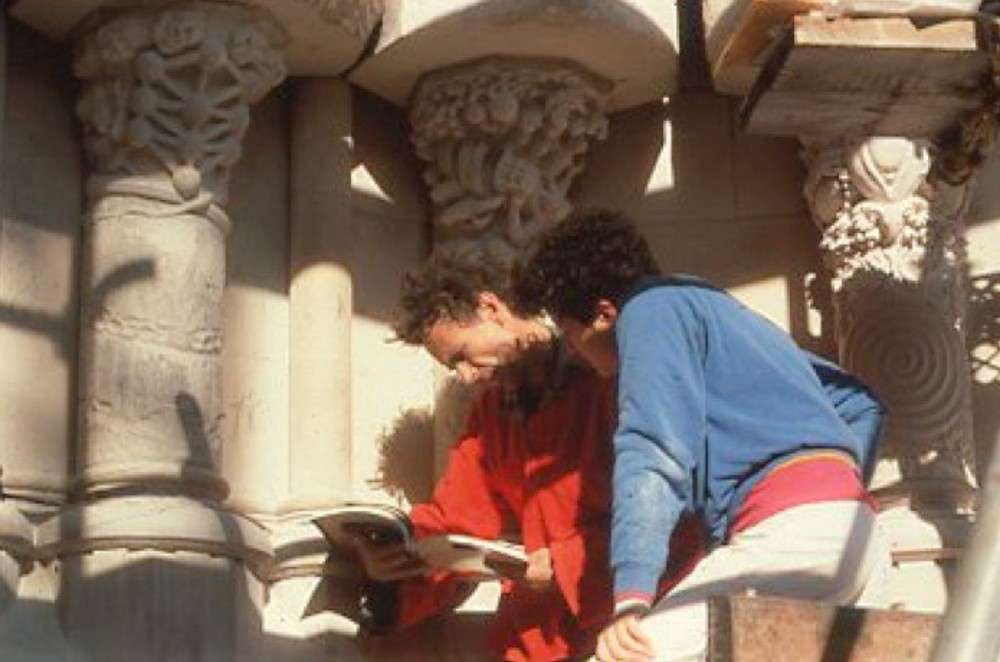 Simon Verity (in red) works with Amy Brier on the base of the Moses pillar. Later Simon quipped that he and Amy “assiduously read our bibles, which gave us an unwarranted reputation for saintliness.” Photo by Martha Cooper.

A dark vision in stone

Ominous images, especially in a post-9/11 world, dominate carvings on the pillars south of the massive doors. The twin towers of the World Trade Center and other modern New York landmarks seem to burst into space under a mushroom cloud. A bus tumbles off a broken Brooklyn Bridge, flying into the air above the New York Stock Exchange. Looking backward with 20-20 hindsight makes the carver look like a dark prophet. Indeed, several websites cite this disturbing imagery to prove their conspiracy theories about September 11. 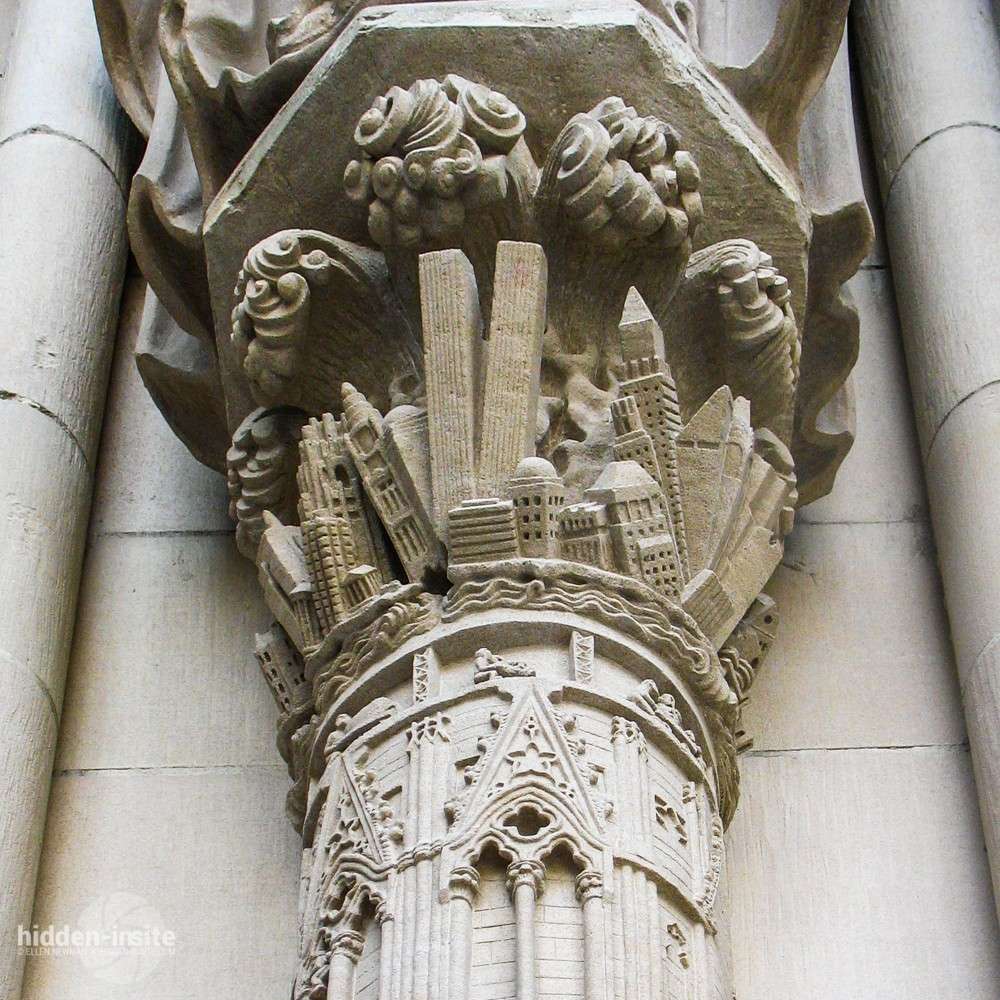 It was hard to understand what we were looking at. Were the bases of these pillars a fanciful view of the chaos of New York imagined as one of Dante’s circles of hell? Or were they a modernized interpretation of the Apocalypse from the book of Revelations, substituting a teeming New York City for Jerusalem?

Simon told me that these plinths supported the figures of the prophets Amos, Hosea, Isaiah and Jeremiah, all of whom preached destruction unless people mended their ways. The images were indeed a late 20th-century version of the Apocalypse. It was just what my cousin Robert described—an old and venerable message so tightly bound with modern imagery that it is hard to tease apart the old and the new.

A closer look revealed a message of hope beneath the destruction. Images of the cathedral being built, including carvings of workers hauling cement and shaping stones, sit directly under the cityscape on the verge of ruin. These hopeful images remind us that the commitment to build a cathedral — with its huge expenditure of time and capital — is an expression of extreme optimism.

The optimist-in-chief at St. John the Divine from 1972-1997 was dean of the cathedral James Parks Morton. Cheerleading the ongoing construction with unabashed enthusiasm, Morton brought in numerous artists-in-residence to complete the work and train unemployed neighborhood youth to become carvers and stonemasons. At the same time he expanded community programs that reclaimed abandoned housing and fed the hungry. Under Dean Morton, St. John the Divine also hosted the full spectrum of residents and visitors to New York – from neighbors seeking solace to the Dalai Lama, politicians of the day and Big Bird eulogizing Jim Henson. 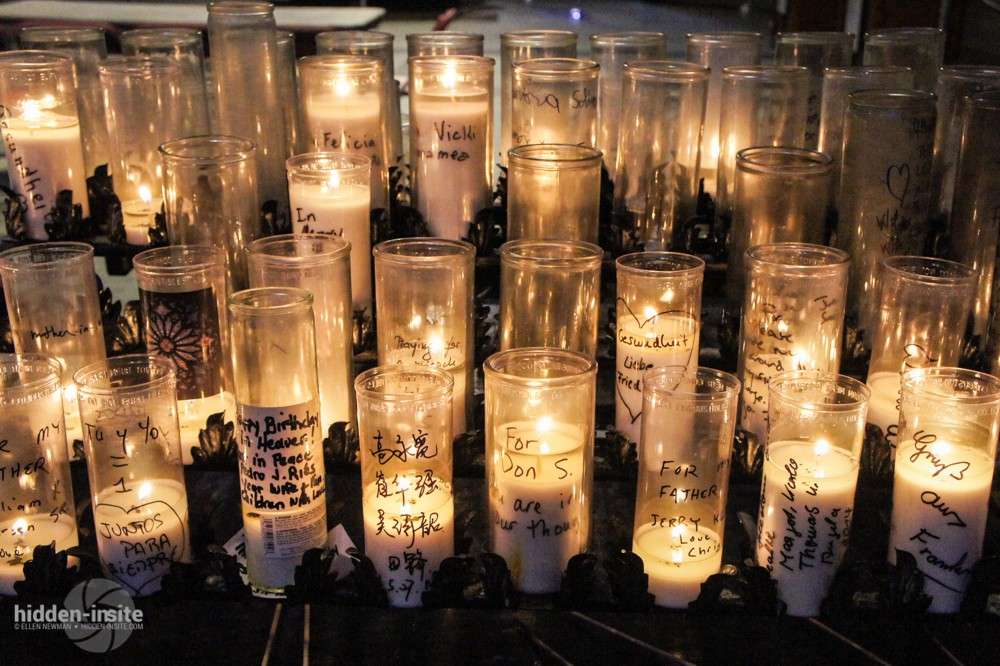 But finding money for both building and social justice stretched the cathedral’s resources tight. Construction was suspended in 1997.

Stonemason Timothy Smith felt the change acutely. His path to masonry looped through teaching in Vermont where he started an afterschool program so disadvantaged teens could make money building stone walls. He was hired as an apprentice at St. John because of his teaching background; then he became one of the trainers. “We showed the world that if you have a good training program, you can build anything. We worked on the tower for ten years. It was the thrill of my life,” he told me. 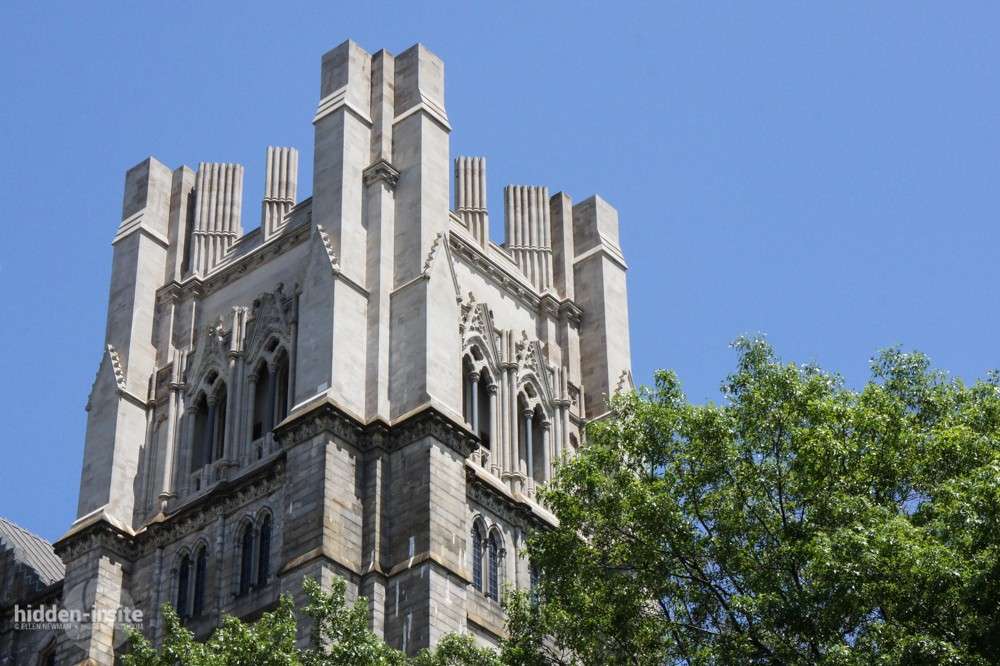 “Dean Morton was a driving force. He had a complete passion for building the cathedral. You’ll never see anything like that again,” said Timothy.

Quoted in the New York Times as he neared retirement in 1997, Dean Morton said, “A cathedral does make one humble in a sense. It’s terribly important to realize you can’t complete it.” Although new construction had ceased, a December 2001 fire in the North Transept caused extensive smoke damage, initiating five years of restoration, which was completed in 2008. Since then work on the building has been limited to preservation and site improvement at a cost of $11 million per year.

No wonder the cathedral on Amsterdam Avenue remains St. John the Unfinished.

Come inside for a look at the interior of St. John the Divine.

What is it like to work on such a monumental undertaking? Master carver Simon Verity, carver Amy Brier and stonemason Timothy Smith generously shared their hidden insights about working in stone.