An Inside Look at the Puzzle of St. John the Divine

“St. John the Divine really is a Hidden-inSite sort of place,” explained my cousin Robert Leighton, as he ushered my husband David and me inside the grand Episcopal cathedral in Morningside Heights in New York City. He had lots of treasures he wanted to share with us.

Once we got used to the subdued lighting and hushed tones inside, we were able to register the size of the place – 601 feet long, the equivalent of two football fields. This is not an intimate space for personal prayer, but an extravagant gesture initiated by New York’s Gilded Age elite in the 1890s. These were the same people who built the Metropolitan Museum of Art and the New York Public Library. They had ideas to match their money, perhaps too many ideas to contain in one place. 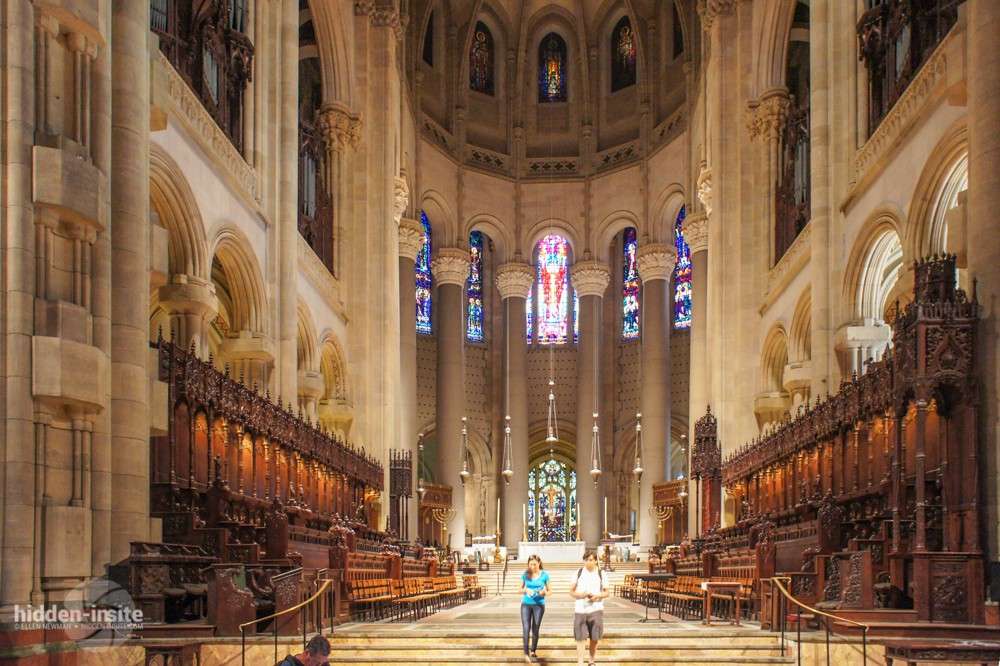 Standing in an architectural puzzle

And mid-project, they changed their minds. The initial architects, George Heins and Christopher Grant LaFarge, started work in 1891, designing a Romanesque Revival building. In 1911, with the cathedral partially finished, George Heins died and architect Ralph Adams Cram was hired to complete the work. His style of choice: Gothic Revival. Walking through the cathedral today, you can see the mash-up of styles—rounded arches here, pointed arches and flying buttresses there. Teasing out the design elements is part of the mystery and delight of visiting St. John’s. 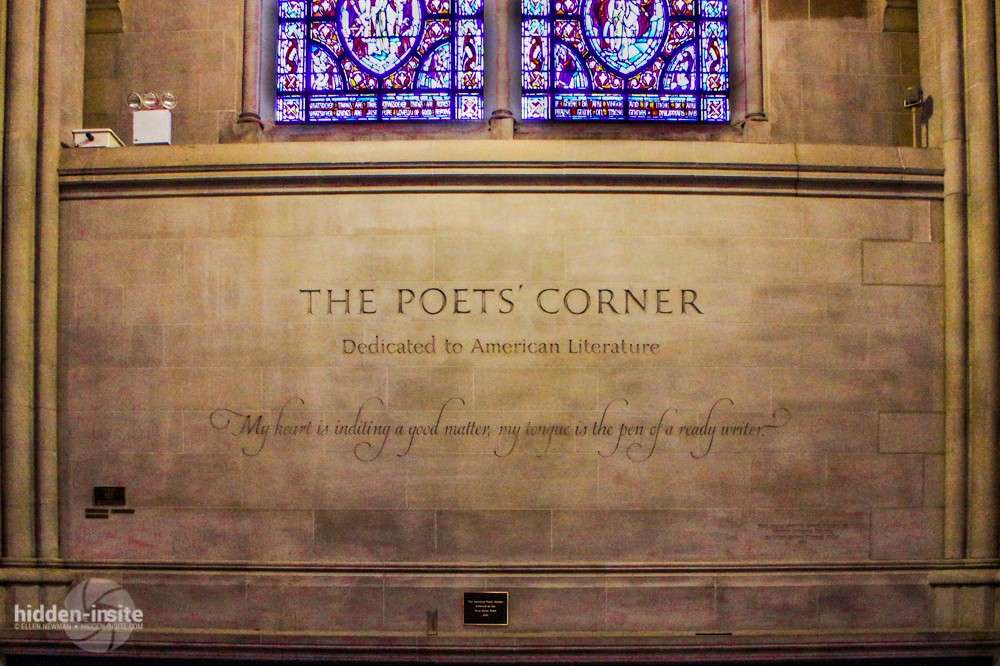 Inside, my cousin Robert led us on a treasure hunt to find the modern puzzle pieces that draw him to St. John’s. The long Gothic nave features 14 themed bays “honoring professions and human endeavor” built in the 1930s, according to the self-guided tour pamphlet. That’s where we headed.

Glancing at the stained glass windows with their jeweled hues of red and blue reminds me of Chartres and the other great cathedrals of Europe filled with images taken from the Gospels.

A closer look at the St. John windows reveals that the topics depicted are anything but medieval – or even religious: art, education, law, military, the environment, communication, labor, medicine and sports.

The windows represent an American Gospel of progress and innovation. The window dedicated to the Earth features images of dolphins, hunters, logging and freeways. Shakespeare, Donatello and other writers grace the window above the Poet’s Corner, which salutes America’s literary greats, including Mark Twain, Emily Dickinson, Langston Hughes and Tennessee Williams. The labor window commemorates firefighters and other workers, the legal window gives a shoutout to the Magna Carta, and the history window includes images of George Washington, Betsy Ross, trains and tall ships. 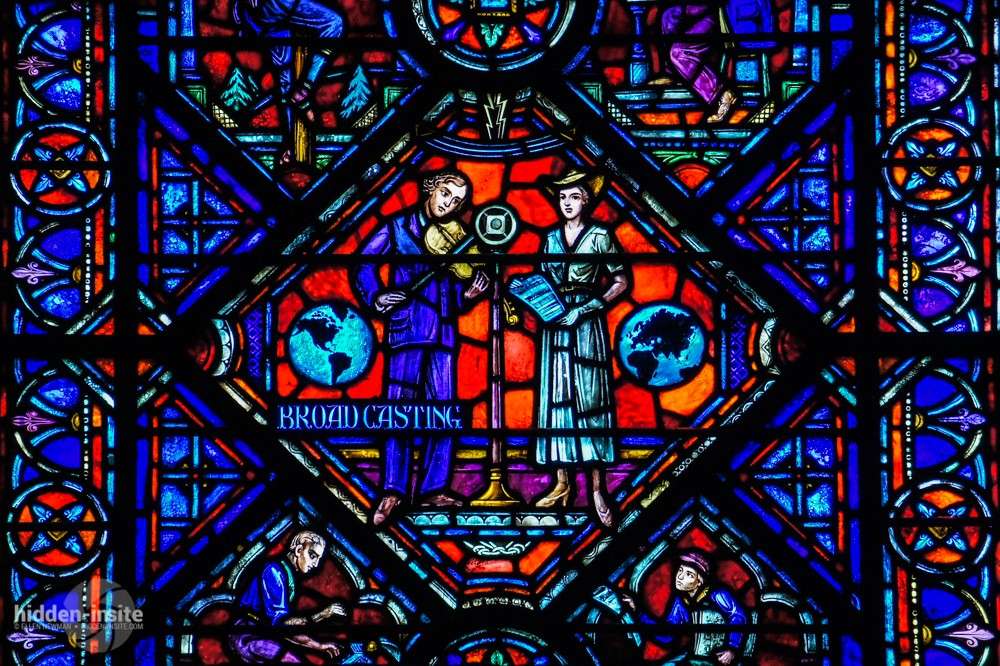 The communications window was our favorite. Robert had been headed there all along. It was the hidden insight he wanted to share with us. “It looks like someone is typing, and there’s an old TV set, a psalm book and someone at an old telegraph machine,” he pointed out. We saw Gutenberg printing the Bible, a lineman climbing a telephone pole and Jack Benny playing the violin in front of a radio microphone while his beloved Mary looked on. As a child I watched Jack Benny on TV, but my parents listened to him on radio.

There was a strange thrill in seeing someone whose life overlapped with mine memorialized in a Gothic-style stained glass window. It made me wonder about the people pictured in historic churches around the world. Who were they? What were their lives like? Why did the artists choose them as models to represent religious icons?

There is no doubt about the references for the sculptures of Martin Luther King, Jr., Albert Einstein, Susan B. Anthony and Mohandas Gandhi placed in the parapet around the choir. The carvings by cathedral artist-in-residence Chris Pellettieri are so lifelike that it looks as if the group had just gathered for an important meeting. 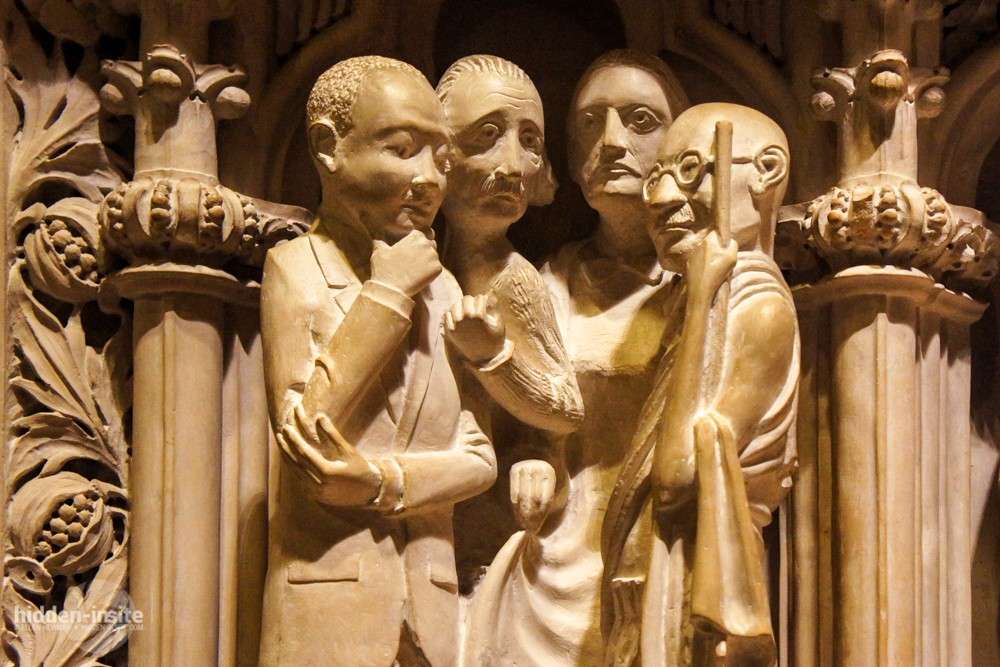 Visitors in the know flock to a nearby bay, the Chapel of St. Columba, to see the luminous bronze and white gold altarpiece made by American artist Keith Haring before his death in 1990. Called “The Life of Christ,” the exuberant altar is almost dwarfed by the massive windows above it. 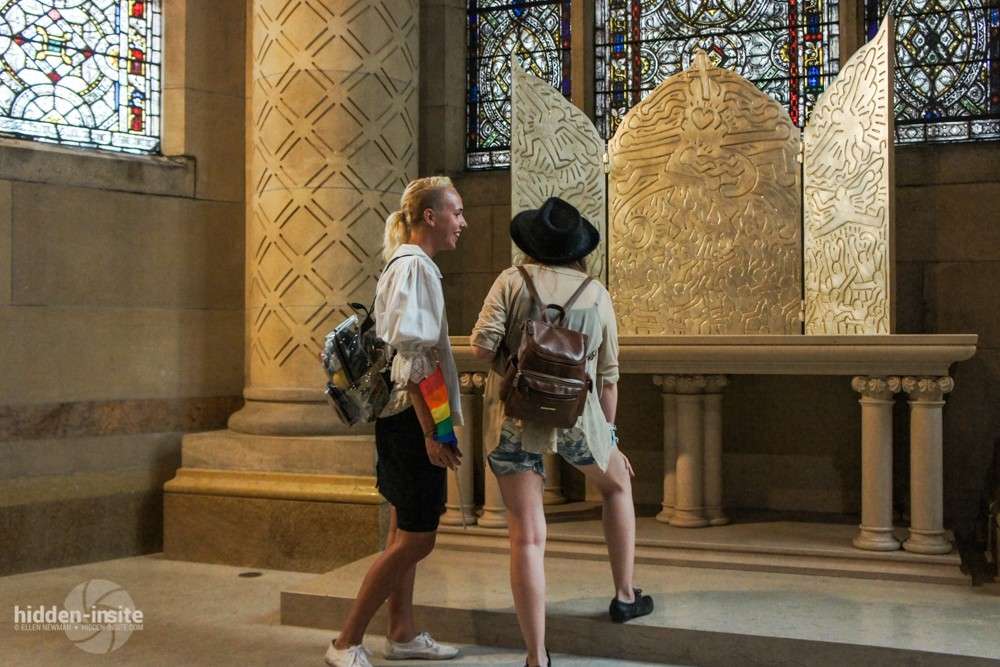 A haunting memorial to September 11 by sculptor Meredith Bergmann depicts two airplanes flying into the hands of a female figure. The pedestal contains reinforced concrete and fabric from the rubble of the World Trade Towers. Although the piece doesn’t match the monumental size of the cathedral, I shivered a bit when I realized what it was. 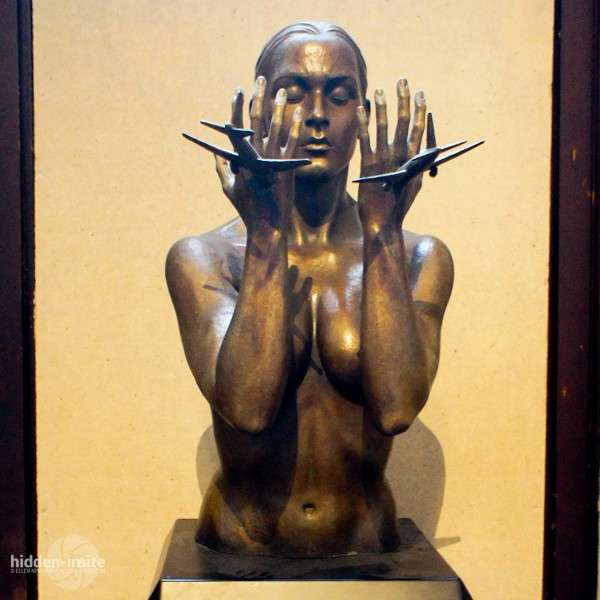 As we continued deeper into the cathedral, we couldn’t help but notice the massive pillars – 55-feet tall and six-feet across – that support the building. They were constructed from New England granite without steel reinforcement, using techniques borrowed from the Middle Ages. 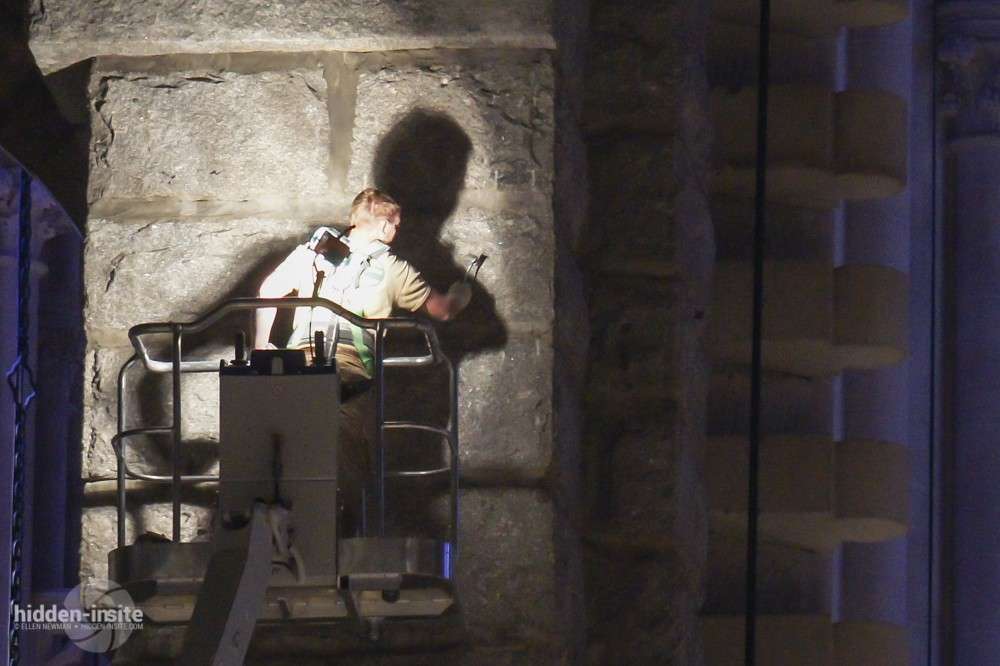 We suddenly heard banging, metal against stone, and looked up to find a worker in a cherry picker near the top of an arch, knocking on stones to make sure they were safely secured and won’t fall. Although construction on the cathedral was halted in 1997, maintenance continues at a cost of $11 million per year.

Gifts from around the world

The center of the cathedral houses many treasures. Visitors can see the 17th-century Barberini Tapestries created on the papal looms in Rome. Nearby sit a pair of teak Siamese (Thai) book cabinets presented to the cathedral by the King of Siam in 1930. A pair of large Japanese cloisonné vases was added to the collection in 1926. 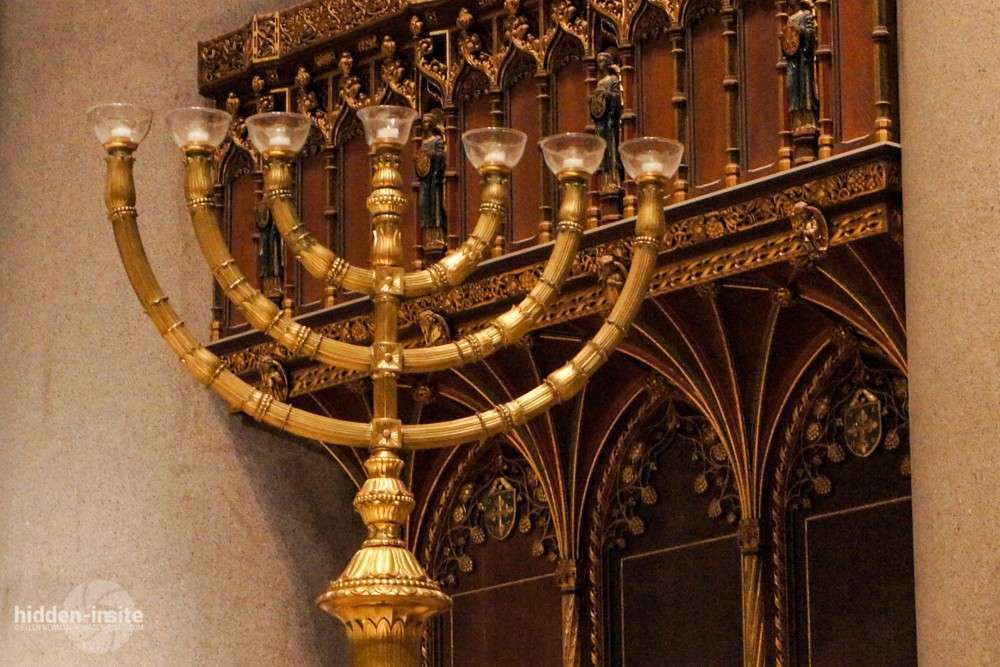 Two twelve-foot seven-branch menorahs, given to the cathedral by New York Times publisher Adolph Ochs in the 1930s, flank the high altar and are occasionally used in services.

On a recent visit to St. John, I was lucky enough to see the Phoenix sculptures by contemporary Chinese artist Xu Bing, a 1999 MacArthur Fellowship recipient. Soaring 18-feet above the cathedral’s nave, two enormous birds, Feng and Huang, each approximately a hundred feet long, flew above visitors’ heads. 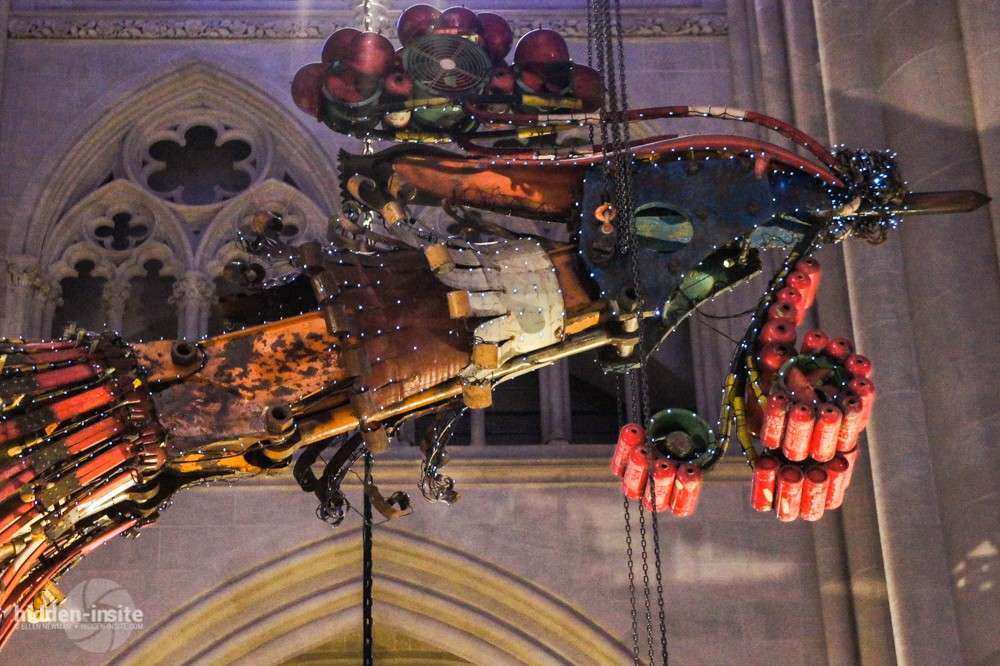 Built from debris and tools scavenged from the World Financial Center construction site in Beijing, they were originally designed to hang in that building’s atrium. The developers, however, refused the commission, claiming the pieces, made from pipes, wires, wheels and other leftovers, looked unfinished. Their loss was our gain. Since their official rejection, the sculptures have traveled from the Today Art Museum in Beijing, to EXPO 2010 in Shanghai, the Massachusetts Museum of Contemporary Art in North Adams, and to St. John the Divine in New York.

Gifts for the rest of us

Whenever you step inside St. John’s, you’ll discover a treasure trove of amazing art and architecture. In addition to visual arts, the cathedral regularly invites performing artists like Judy Collins, Paul Winter, and numerous orchestras, choirs, organists and dance groups. Here’s a link to their current schedule and to info about their public tours. 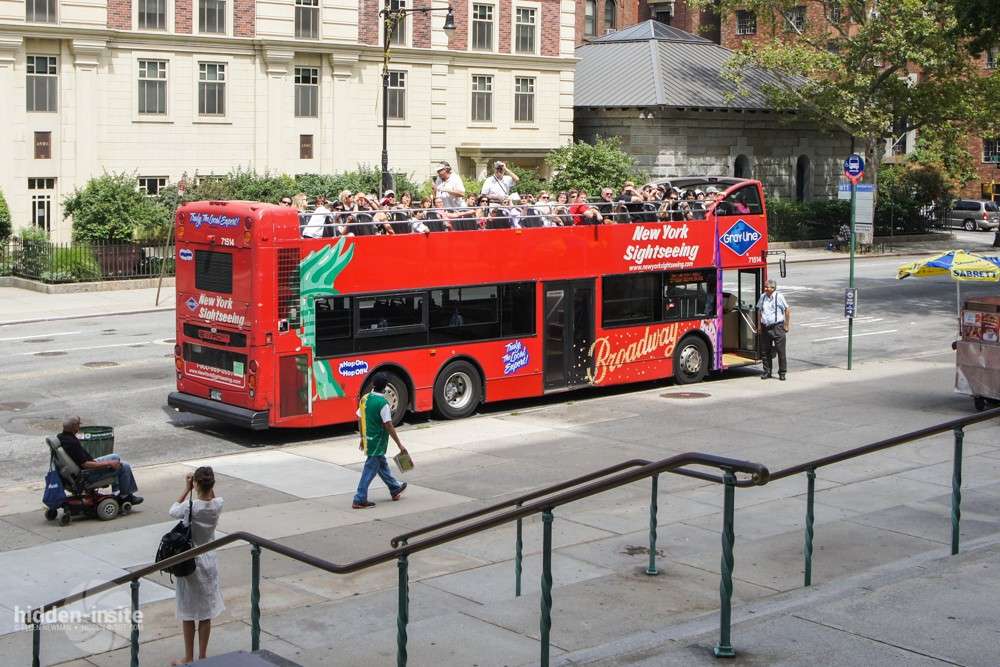 One can go to St. John’s with tourist curiosity, as we did. Or one can worship, study, immerse oneself in the arts, feed the homeless, gather sustenance or just take part in the pageant that is, and always has been, New York City.

Learn more about the exterior of St. John the Unfinished, as its fondly known.