“The beach was fabulous,” gushed the woman in red at the next table. We were at Luna, a noisy, friendly, garlicky trattoria in Mendocino. Eager to catch details, my ears stretched out and wrapped around the table, barely missing the server. After a fortifying sip of Pinot Grigio, I butted in. “Where?” I asked.

“Glass Beach in Fort Bragg,” she said. Then, her voice hushed to a conspiratorial whisper. “It used to be the town dump,” she murmured. “And you must check out the Sea Glass Museum. Captain Cass can tell you all about it.”

The treasure hunt was on. We hurried out the next morning to catch the 8:45 low tide. Our instructions: “Drive up Highway One and turn left at Denny’s.” Definitely Fort Bragg, not Mendocino.

The parking lot emerged, as described. We followed the instructions from last night’s conversation. “Take the trail to the left, near the fence.” We found the trail, but our informant had forgotten to mention the cliff. The beach was a long way down. Yikes! 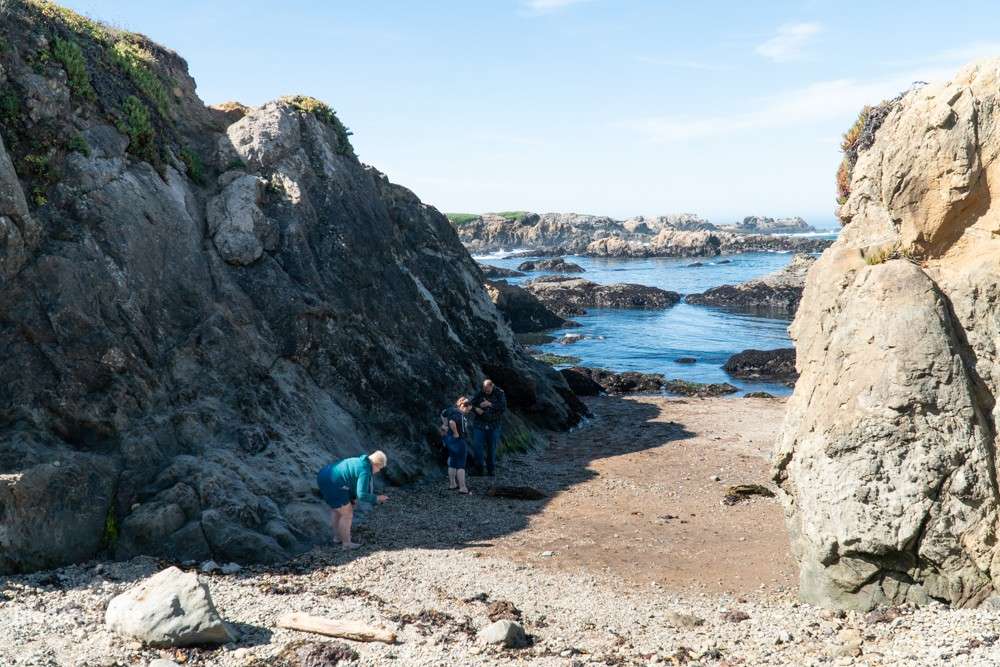 The narrow path snaked between slag mounds with sharp pieces of glass sticking out—all the better to scrape you with, my dear—and poison oak, whose innocent-looking branches were ready to ensnare me. 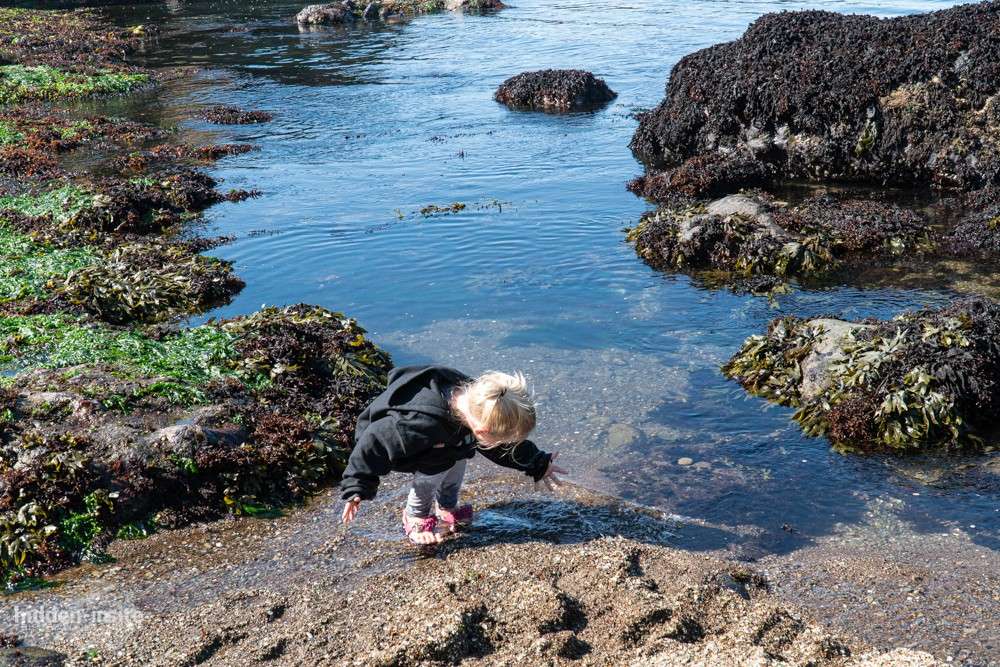 But people with children and dogs had obviously made it down. I didn’t skip breakfast to turn back. We found a safe gap and headed down to a small cove ringed by rocks and tidepools. It didn’t look promising until what I thought was a patch of sand started to glisten as the sun rose. Glass. Sea glass. We were in the right place. 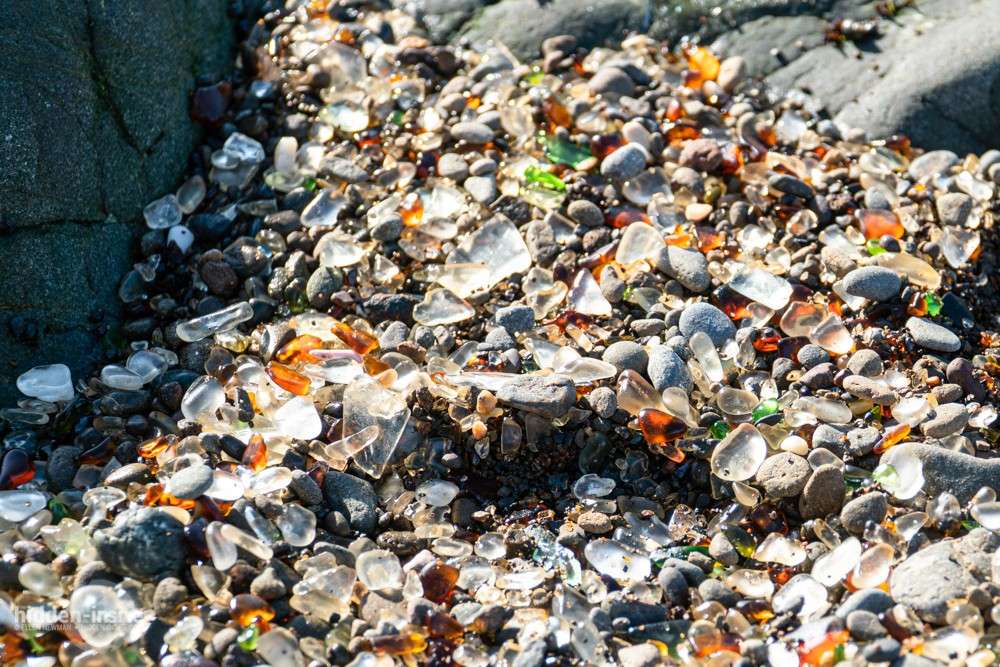 Some sightseeing takes your eye to the horizon or the tops of mountains. Looking at sea glass, really looking, demands an undignified posture—head down, butt up. Better yet, if you can, squat. It’s worth all those trips to the gym to preserve your dignity.

Early morning, with the tide out and the sun washing over the beach, brings all the colors out to play. There’s Pepto-Bismol and Noxzema blue, taillight red and beer-bottle amber. Aquamarine is left over from old jugs, and turquoise shards are remnants of decorative art pieces. There’s Coke-bottle green. And plain old clear glass from, well, drinking glasses and industrial fittings.

At the waterline sea glass played hide-and-seek with bright green seaweed. Hermit crabs scampered across glass fields to safety in the tidepools. A gentle sneaker wave, the advance force of the incoming tide, nearly got me. I stood up and readjusted my scale. 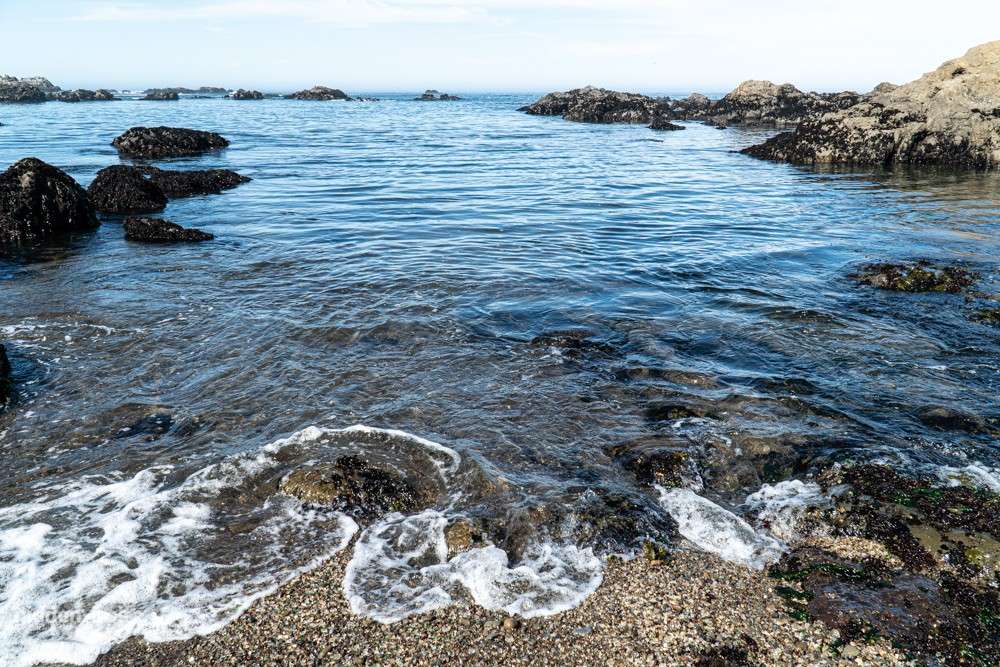 I had been concentrating on things the size of a button, and suddenly the great Pacific stretched before me. The tide was coming in to do its work, transforming household detritus into jewels of the sea.

No one on the west coast knows more about sea glass than Captain Cass, that is Captain Joseph (Cass) Forrington, proprietor of Fort Bragg’s Sea Glass Museum. After exploring the world as a captain in the Merchant Marine, Captain Cass and his wife moved to Fort Bragg in 1979 and raised their children there. He retired from the sea in 1998. 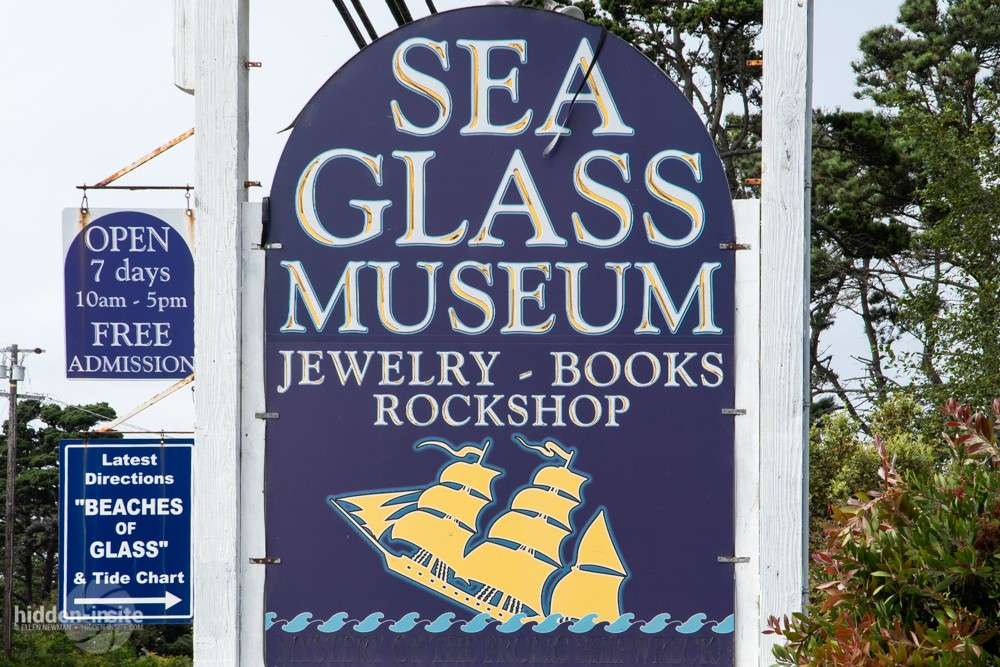 Becoming a sea-glass maven “was completely a fluke,” Captain Cass told me, ignoring his ocean pun. He went to Glass Beach once when he moved to the area and “was completely unimpressed.” Captain Cass, whose blue-gray eyes shine like the sea glass pebbles we saw on the beach, sports an off-white beard and north-coast ponytail. His considered words say exactly what he thinks. 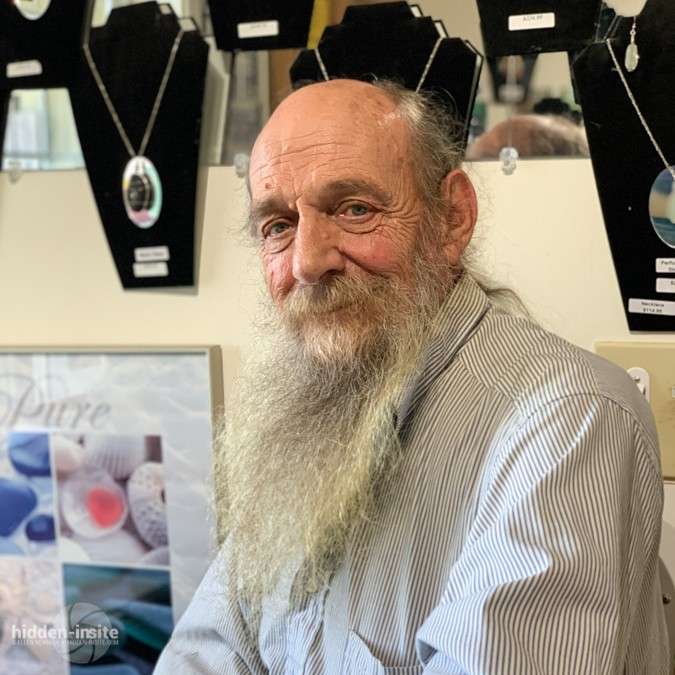 His sea glass tale goes something like this: Cass was taking a friend for walks to recuperate after being hospitalized. Their walks took them back to Glass Beach, one of three adjacent areas where the city of Fort Bragg dumped its garbage from 1906, when the San Francisco earthquake shook northern California and leveled Fort Bragg, until 1967.

Through a trick of nature, the discarded, rejected glass never washed out to sea, but was tossed around and pounded and polished by the waves and rocks. After decades in these cocktail shaker coves, the remnant glass was striking enough to become collector’s items. 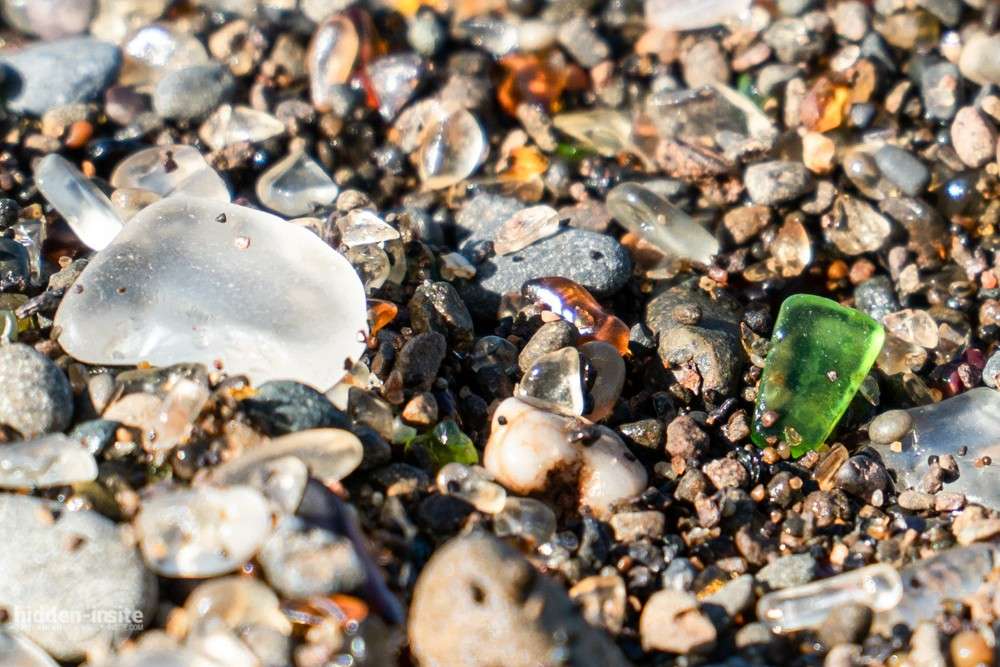 On his walks with his friend Captain Cass saw Glass Beach with new eyes. “This is pretty,” he thought. “Someone should do something with this.” As if by magic, along the path he encountered a woman selling bead jewelry near the beach. “I decided to try using the glass to make jewelry,” he said. “I just wanted a little extra money to play golf or something. I haven’t played golf since. It took right off.”

He started selling his jewelry near the beach. “About two or three weeks into it, a little girl walked by with her mother and said, ‘look Mommy, sea glass.’ I’d never heard the term before,” Cass said. “I went home and looked it up on the Internet and discovered a whole industry out there. That’s how I got started.”

We chatted across the display counter where Cass has been selling his jewelry since 2008. The museum idea grew organically as he realized how many treasures he’d plucked from the sea. From the tiny front room of the building on the east side of Highway One, he slowly added exhibit space, showing off the various colors of sea glass, explaining their rarity and describing their origins. Video monitors play his media interviews. One room houses glass that glows under black light, and another showcases tumbled terra cotta shards. 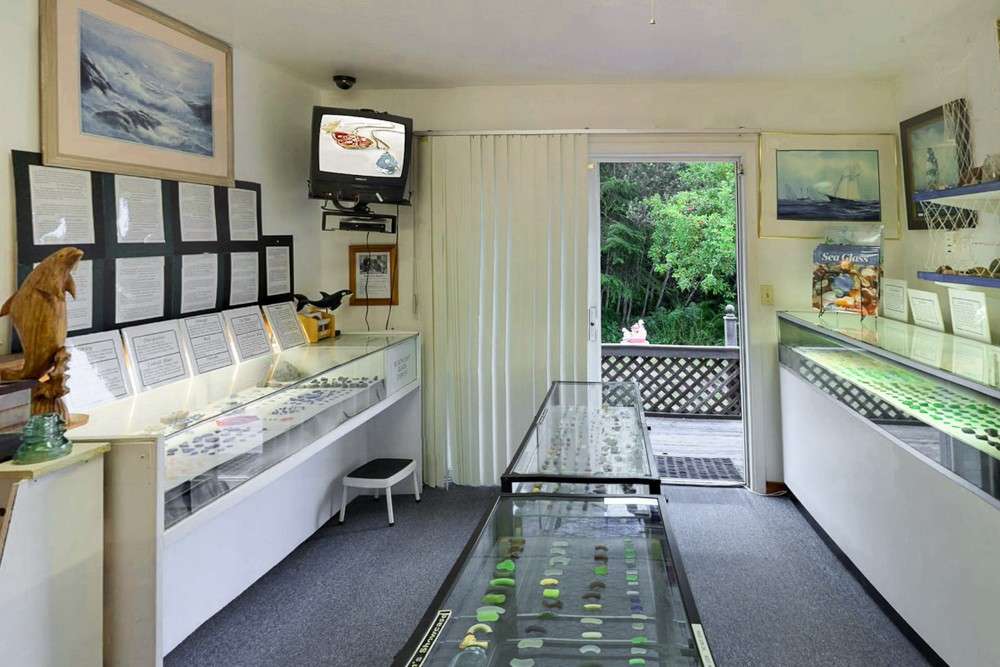 As we talked, Cass paused to click in visitors one by one on his running counter. “Hi. How ya doing?” he nodded to a fellow coming in. “This is the most popular privately owned attraction on the northern coast,” he told me. “In the peak year we got 21,000 people. Now I’m running about 18,000 because we lost the abalone season and we had all the fires inland. We lost 25,000 homes in northern California in the last two years. That’s a tremendous number of displaced people.” And lost potential customers.

I knew about the fires, of course. But what about the abalone, usually another major attraction on the Northern California coast? Where did they go?

Starfish, urchins and kelp … a tale of ocean health

Captain Cass digressed to tell me why the abalone disappeared. About five years ago there was a starfish necrosis or wasting disease, an epidemic that effectively killed off sea stars from Alaska to Southern California. That probably explains why we saw only one orange starfish along the shore.

Here’s the everything-is-related ecological science part: Starfish eat sea urchins. Without starfish, the urchin population exploded. As Cass explained it, “The urchins, not the good kind you can eat, but the other ones, took over the sea floor.” And that leads us to kelp. Urchins eat kelp. 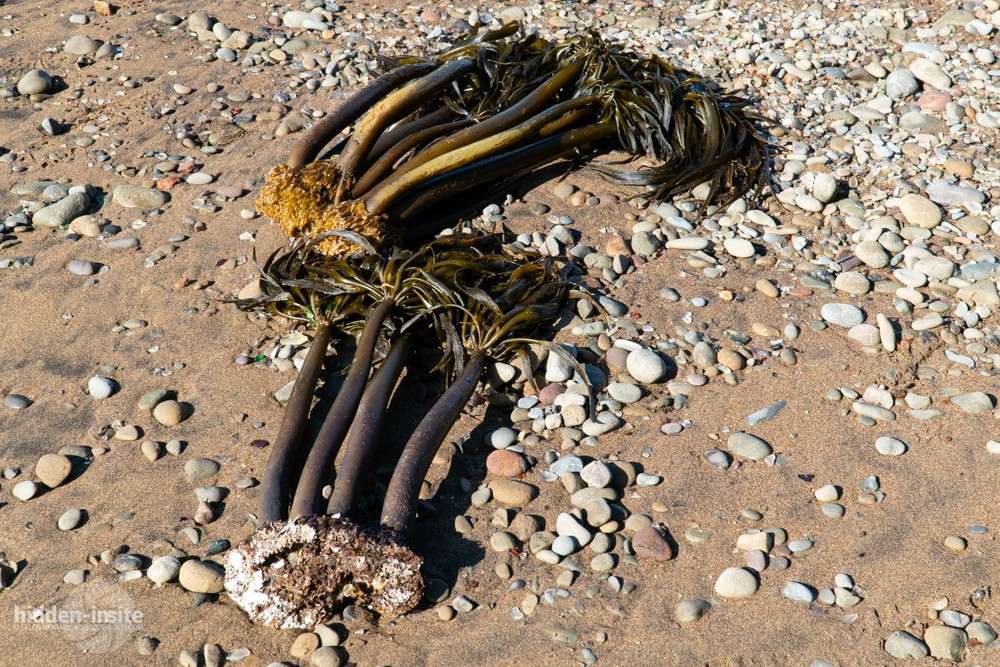 Kelp, it turns out, is an annual crop. When the urchins covered the sea floor, there was no place for the kelp to root and renew itself. And who else eats kelp? Abalone, of course. So without kelp, the abalone died off. According to Cass, “It was a real catastrophe.” He told me that the kelp will return, and the abalone will come back, but slowly, very slowly.

Back to sea glass and ocean ecology

After decades of living at sea and on the wild Northern California coast, Captain Cass is passionate about the health of the oceans. He believes the glass is extremely beneficial to the marine environment. “It’s just mineralized sand that acts as a mineral supplement for the micro fauna. It’s the basis of the food chain,” he said.

Was Cass worried about depleting Fort Bragg beaches of the glass that made them famous? “Glass Beach used to be seven-feet thick, and that was before tourists ever heard about it,” he said. “People started recycling the colored glass informally. It has a thousand uses. It’s in the path at the museum, in the path at the Skunk Train. It’s used in art and in terrazzo.” 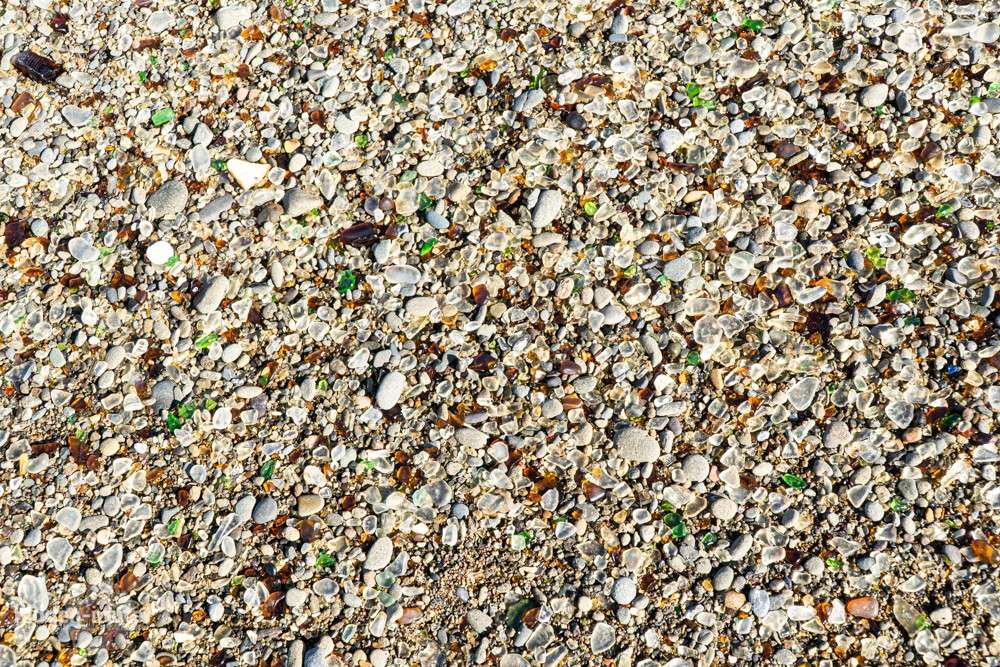 For both environmental and recreational reasons, Cass would like to see Fort Bragg recycle its glass locally rather than truck it over the Sierra Nevada to bury in a landfill in Nevada. “The whole thing is absolutely insane. I feel like Don Quixote,” said Cass wistfully. “The windmills are turning and I’m slicing away.”

And now we’re back to where Glass Beach began—at the landfill. If Captain Cass succeeds, Fort Bragg will once again turn its trash into useful treasure. 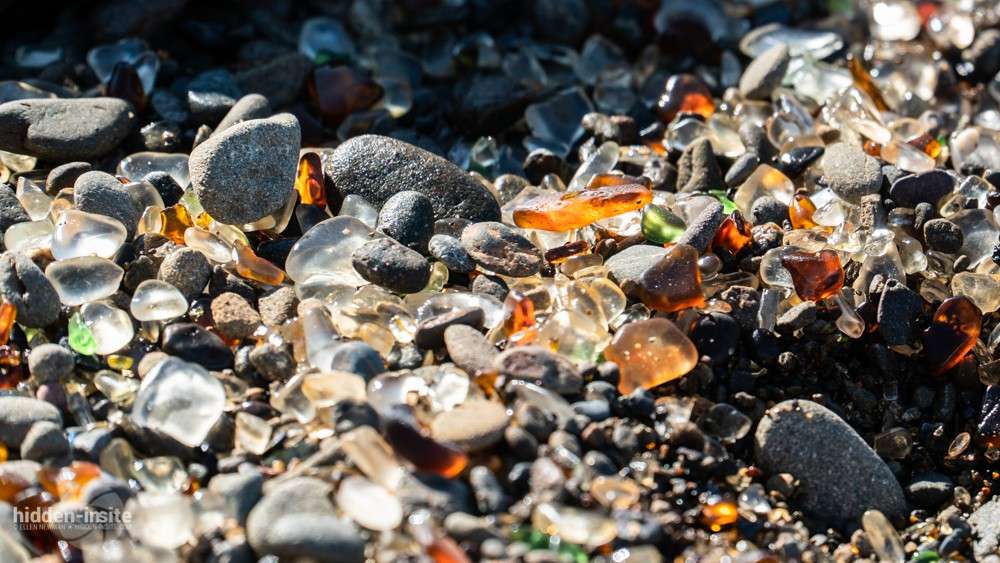 And just think, I wouldn’t have learned any of this if I hadn’t followed a hot tip from a lady in red at an Italian restaurant in Mendocino.

Glass Beach is just to the north of Fort Bragg. Driving north on Hwy. 1, pass the Noyo River and “downtown” Fort Bragg. Denny’s on the west side of the street is your landmark to turn west on Elm Street. Drive 3 blocks, and park in the new lot. From the parking area take the path on the left to the cove that was the second dumpsite. The trail to the right goes to the third site, which is part of MacKerricher State Park. (The original dumpsite is inaccessible except by swimming or kayak.) The best glass viewing is at low tide on a sunny day. Check a tide table, and watch out for the incoming tide.

Can you collect? Not according to State Park authorities. However, Captain Cass points out that all legal entities, including the parks, end “at the mean high water mark,” which means that glass exposed at low tide is almost certainly collectable.

Luna Trattoria is the Italian restaurant in Mendocino where I learned about Glass Beach. In addition to great garlicky pasta, I hope you get a hot tip for something fun to do when you visit the Mendocino-Fort Bragg area. Luna Trattoria is located at 955 Ukiah Street, Mendocino. Open for dinner, Tuesday-Sunday. Phone: 707-962-3093; web: lunatrattoria.com.