Thwack! I was standing under a curtain of clean laundry drying in the sun when a sharp sound caught my attention. Thwack! I turned to see a pile of wet jeans hit the concrete wall between basins with an impressive splash. Over and over, first came the thwack and then an arc of spray glistening in the sun. 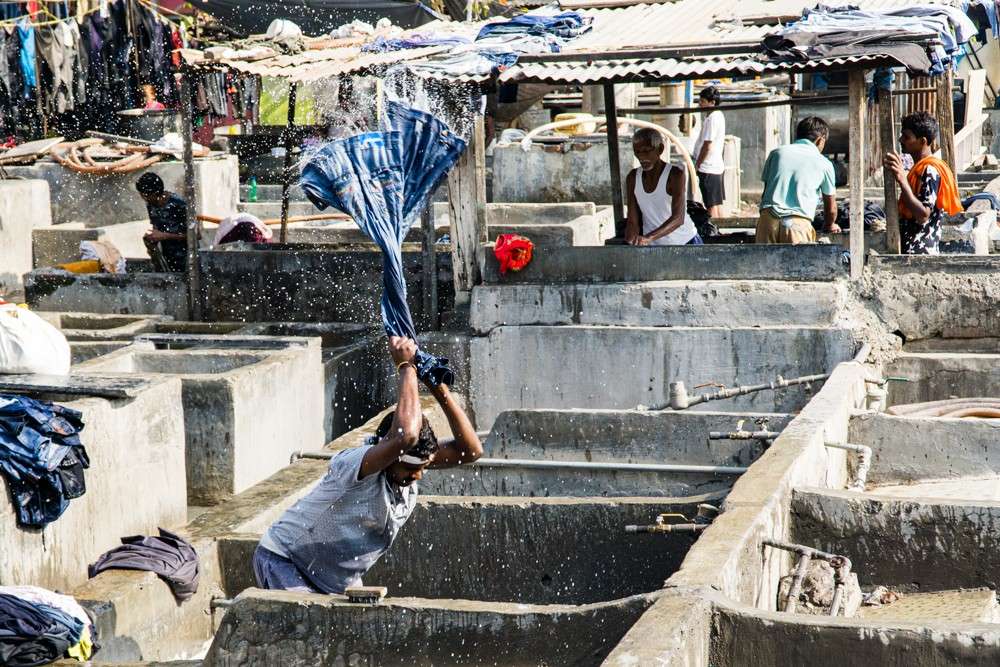 David and I were standing on the sidelines of a field of washbasins watching Mumbai washermen, dhobis, slap newly washed jeans and other laundry against the walls of their tubs. With each smack, the clothes let loose a shower of residual soap and water worthy of a grand fountain. This rough-and-tumble style of washing is definitely not for delicates. 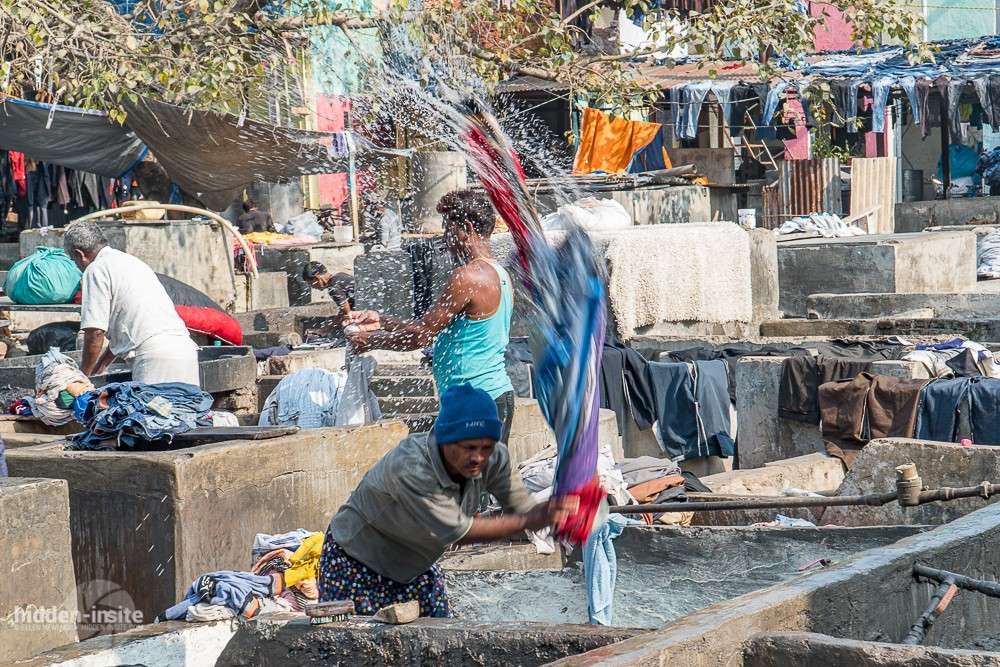 It was our first day of touring Mumbai in February, 2019. Who goes to see a laundry on their first day in a major metropolitan city? It turns out that Mumbai’s outdoor laundries or dhobi ghats are major stops on the tourist circuit. In Hindi, dhobi means washerman, and ghats are the landings or steps that lead to a river for bathing or washing. 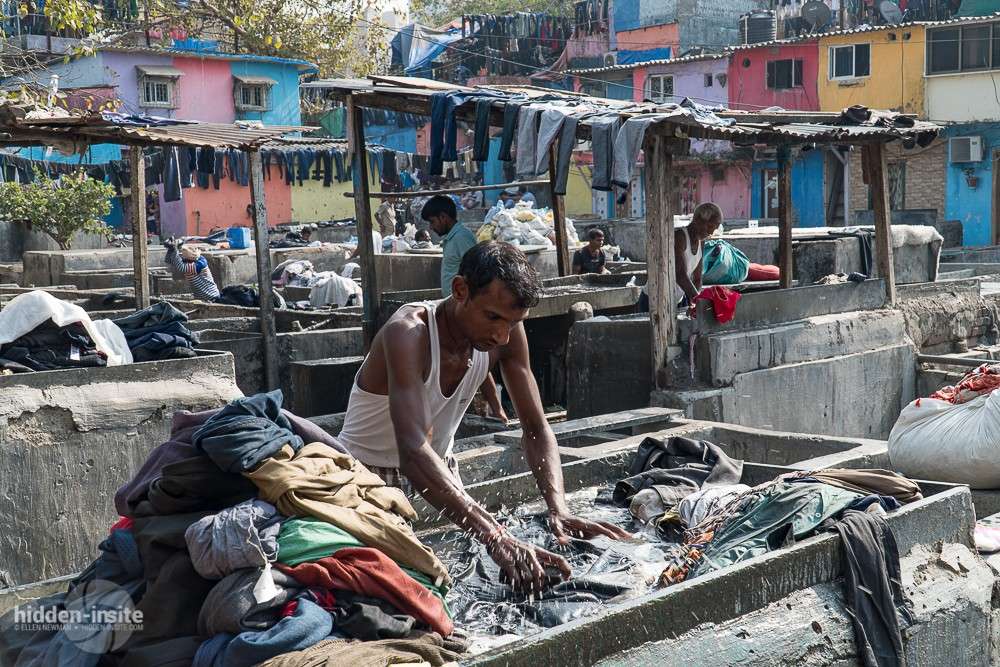 Our visits to two of Mumbai’s famed dhobi ghats gave us a window into the daily life, economics and history of one of India’s great cities.

“I use a dhobi,” explained our guide Freni Avari. “His father used to work for my mother. We are continuing. It’s like family.”

She described how the dhobi system works. “He comes to the house once a week. Every household has a dhobi bag or container where all the clothes are kept. He doesn’t write down what he takes. He just knows,” said Freni. “He wraps them up in a bundle and takes them.” 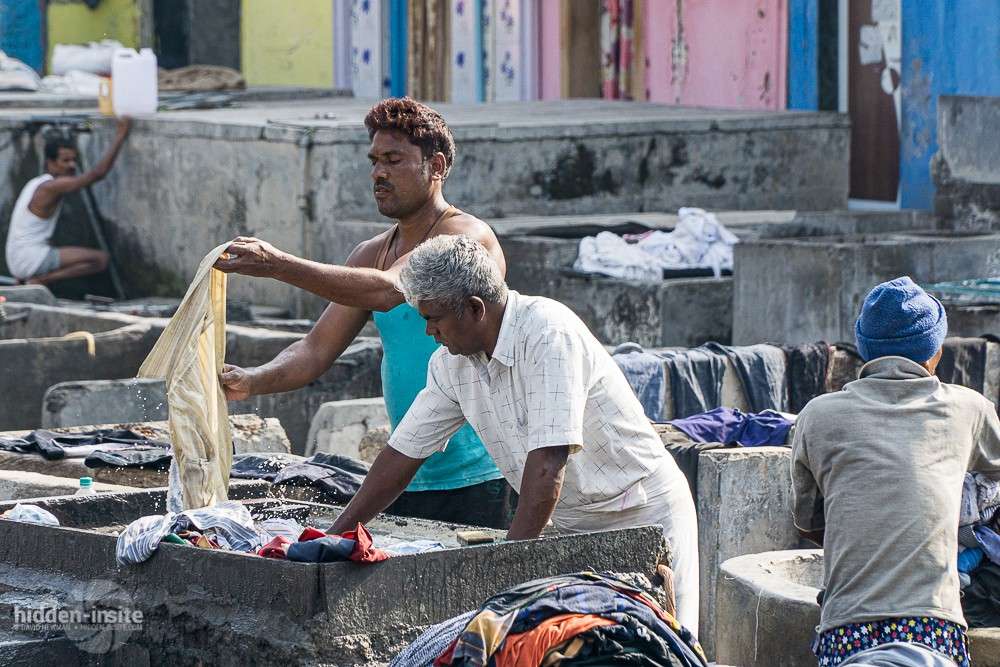 The dhobis pay rent on their little basins. To maximize their income, they wash as many clothes as they can each day. “When they finish, they dry the clothes, then iron, fold and tie them into bundles, one for each customer, ” she told me. When all that is done, the dhobis deliver the clean bundles back to their customers on the same day at same time each week. 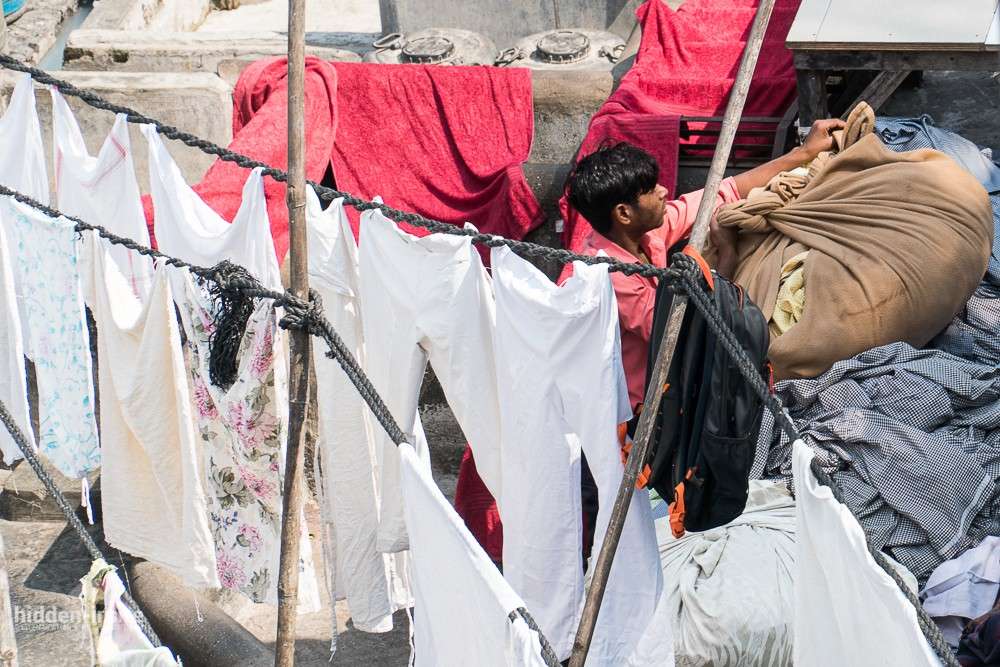 During one of the dhobi’s visits to Freni’s home, he saw her ironing her children’s school uniforms. “He asked me, ‘How much money do you think you are saving by doing your own ironing?’ I said it is not about saving money; it’s about dignity of labor. I’ve got two hands and I can do it. Then he said to me, ‘Do you know how much I’d be earning if you gave me the ironing?’ That was a perspective I had never, ever thought of,” recalled Freni. 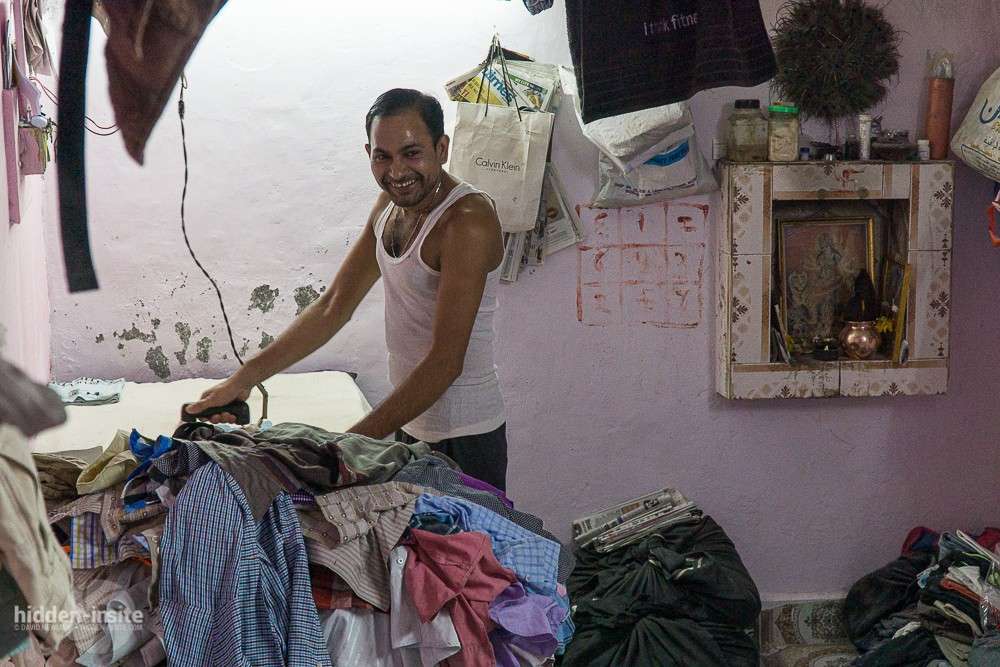 It turns out that the laundry business in a city of 20,000,000 people is big business. At Mahalaxmi Dhobi Ghat, the largest of the dhobi ghats in Mumbai, The Times of India estimated in 2017 that 100,000 items were washed each day, generating approximately $14 million per year for the dhobi cooperative society. The dhobis, like the men who deliver lunches from homes to offices, street-side food venders, small farmers, shopkeepers, auto-rickshaw drivers and so many others are part of India’s huge informal economy. 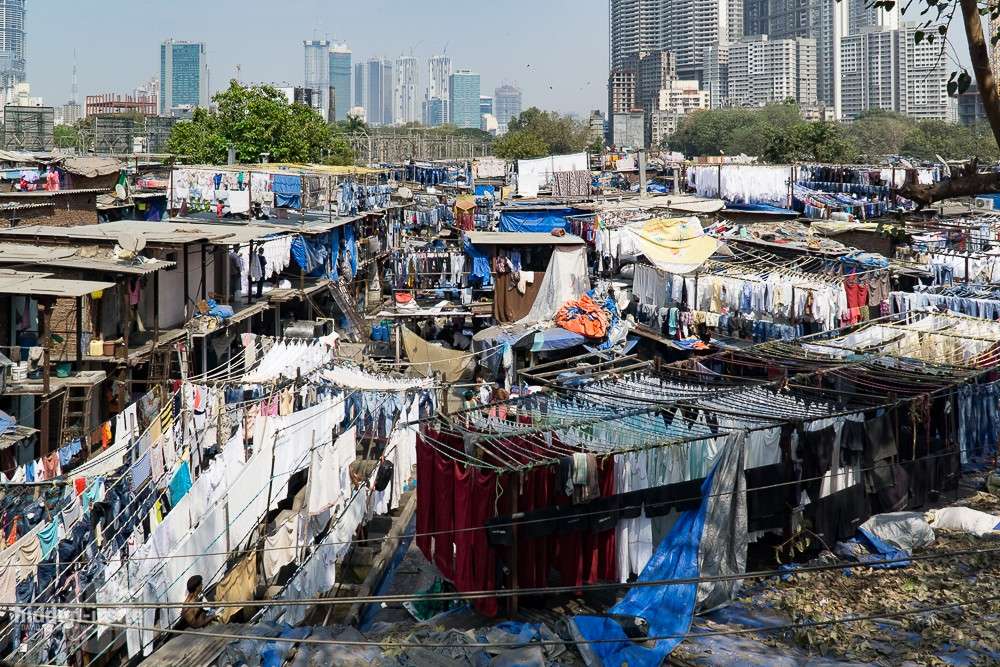 Freni told us that the dhobis’ worries include the rising cost of water and rent and developers who want to take over the places where they wash the clothes. “They are constantly trying to make the business work.”

The history of the dhobis

I was curious how this unique system of outdoor laundries got started. Freni explained that as Mumbai, then known as Bombay, grew under British rule, “support services were required.” 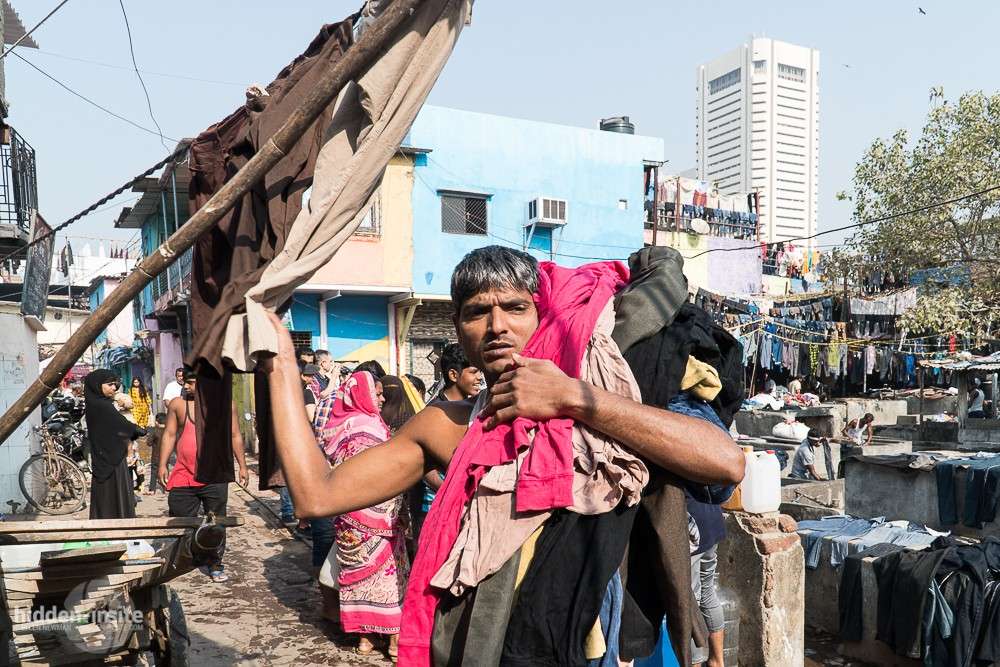 To meet the need and make a living, in the early 1800s the people who became dhobis  migrated from the poorer regions in north-central India to the British outpost on the Arabian Sea. The now-teeming city was originally built on seven swampy islands—only about three miles wide—that the British connected with landfill in the 17th and 18th centuries. Given that geographic reality, Mumbai is essentially a salt-water marsh, with few sources of fresh water. Running water has always been a problem in Mumbai. “In those days the washing was done at water bodies in the settlements,” said Freni. “Near here it was called the Lake of the Washermen.” 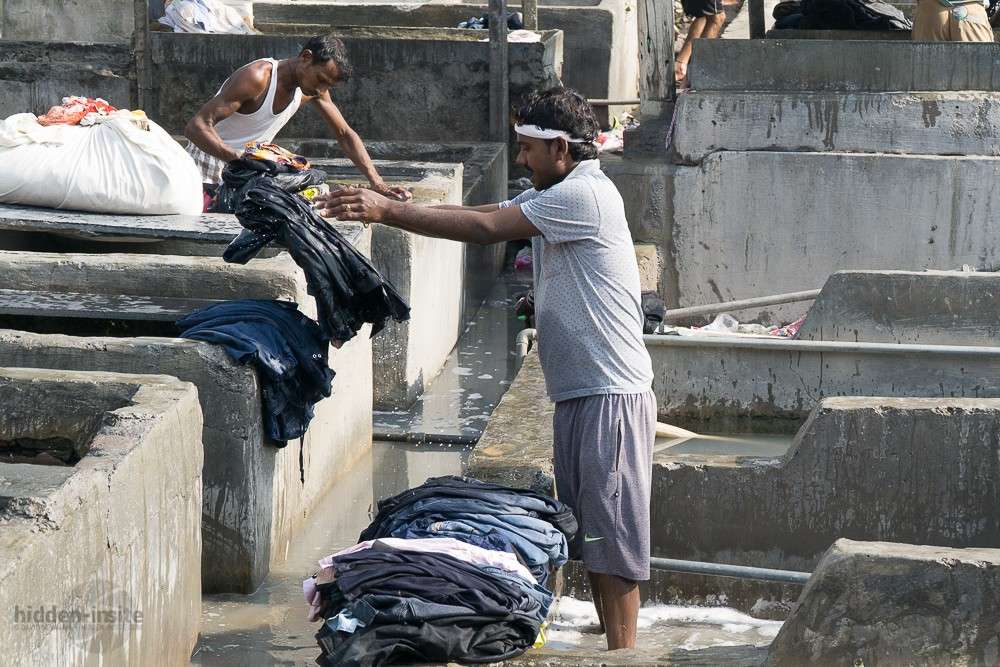 The demise of lakeside washing came with mid-19th-century modernization. When Mumbai’s  famed Victoria train station was built around 1850, the washing lake was filled in to build the access road for the station. “That’s when the British built the dedicated dhobi ghats,” Freni told us.

“We didn’t have washing machines until the 1990s. They weren’t manufactured here so you needed licensing and import duties and all that,” explained Freni. “And what’s the point of having a washing machine if you don’t have running water in the first place?” And so the dhobi ghats have continued into the 21st-century. 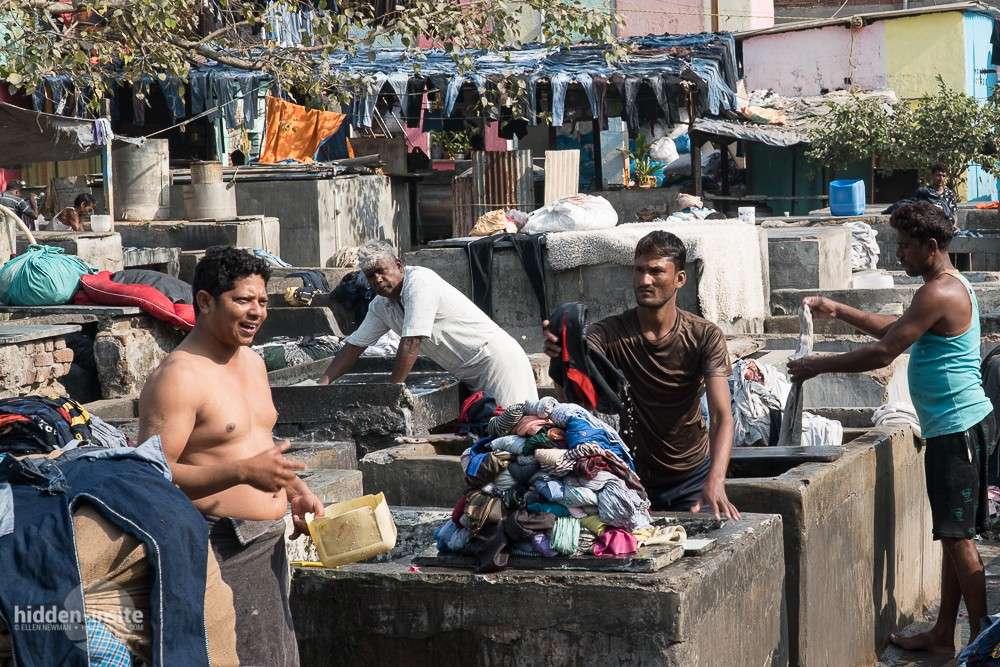 I asked Freni if the younger generation wants to follow their parents’ trade. She said that the parents are very conscious of providing an education for their children. “School is free, so they go to the government school.”  Many of the more educated dhobis upgrade to laundry status where they have commercial clients and do the washing for hotels, hospitals, spas, gyms, sports clubs and restaurants. 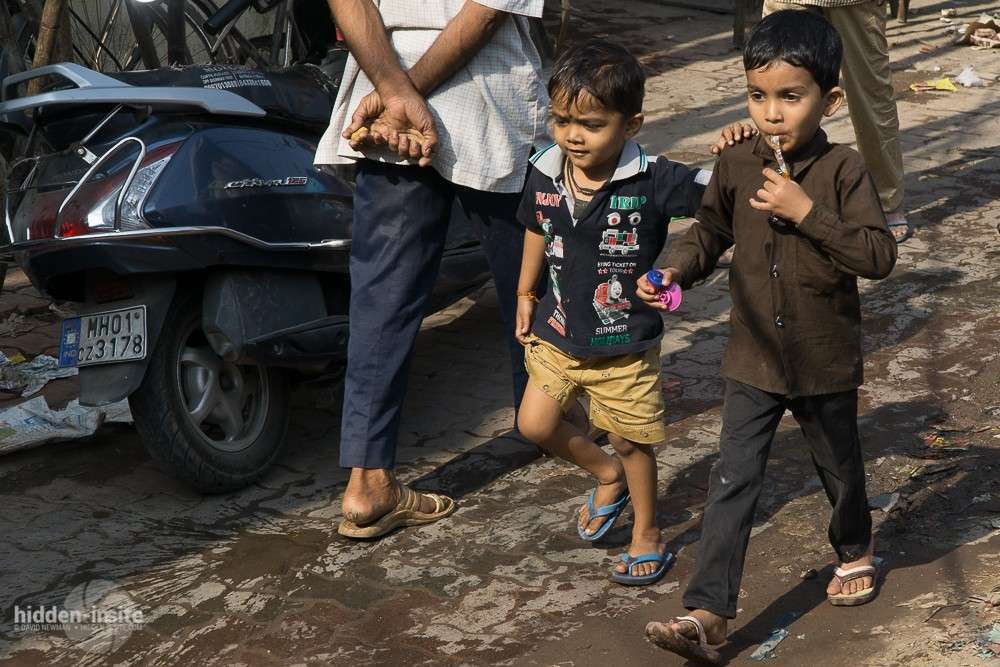 When you visit Mumbai, be sure to fold a trip to the dhobi ghats  into your itinerary. You’ll get a good clean look at some of the people whose hard work makes the megacity of  Mumbai work. 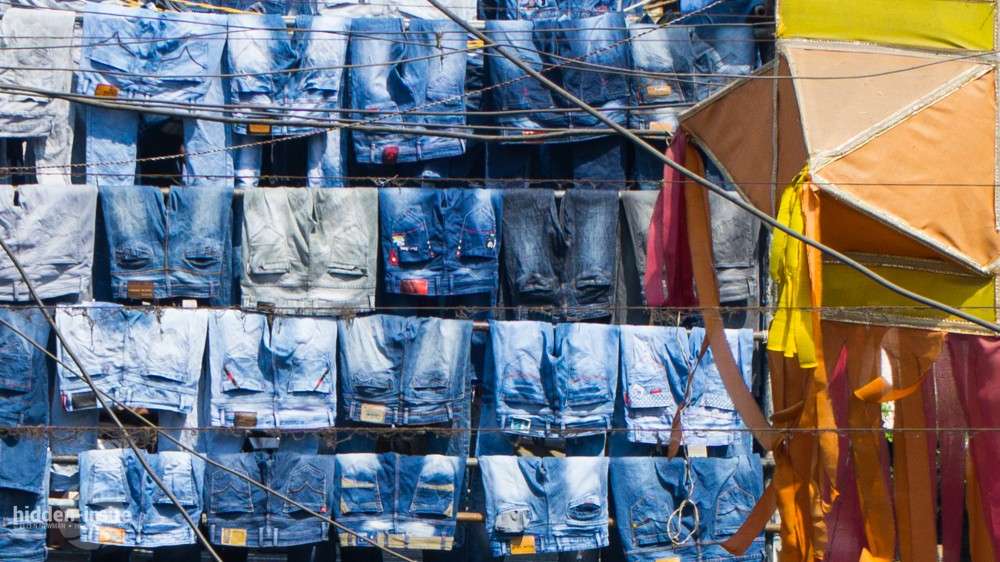 Photos in this post are by Ellen and David Newman.