Reflections on the Indian Spirit

When my husband David and I toured North India in 2018 and South India just a few months later in 2019, we discovered a country rich in spiritual traditions and mystic rituals going back centuries, even millennia. Although neither of us are personally seekers or pilgrims, the scale of the sadness, fear, loss and grief caused by Covid-19 made me think about the people we met and photographed during our time in India. I’ve been wondering how everyone is doing, imagining them stuck at home, whatever home is like for them, rather than in the vibrant, public settings where we encountered each other.

One thing that greatly surprised us, given our Western ideas about intruding on private moments, was how warmly we were invited to observe and photograph rituals central to people’s lives. As a quick example, I was feeling quite shy when our photo group spread out at the Amma Mandapam bathing ghats in Tamil Nadu. Not exactly a temple, and definitely not a cemetery, it’s a place where families gather to offer pujas or prayers on the death anniversaries of loved ones, particularly fathers. As I composed an image of the backs of a group of brothers talking to a priest, they told me, “Please, you honor us and our father by taking our picture.” My shoulders relaxed as I lifted the camera and did the best I could to honor them with faithful images.

In that spirit, knowing that large gatherings and group prayer are curtailed for now during this latest Indian lockdown, David and I compiled this photo essay as a reflection of India’s spiritual diversity with warm wishes and a giant “get well soon, India!”

At Independence in 1947, India was founded as a multi-denominational country. Despite current politics, we encountered numerous faith traditions, as you can see in this poster on a wall in Jodhpur. My friend Shikha Mishra in Delhi translated the poster for me. “It says that all religion is the same. God is one! God is the same whether it is Muslim, Hindu, Christian or Sikh. No faith is superior!” 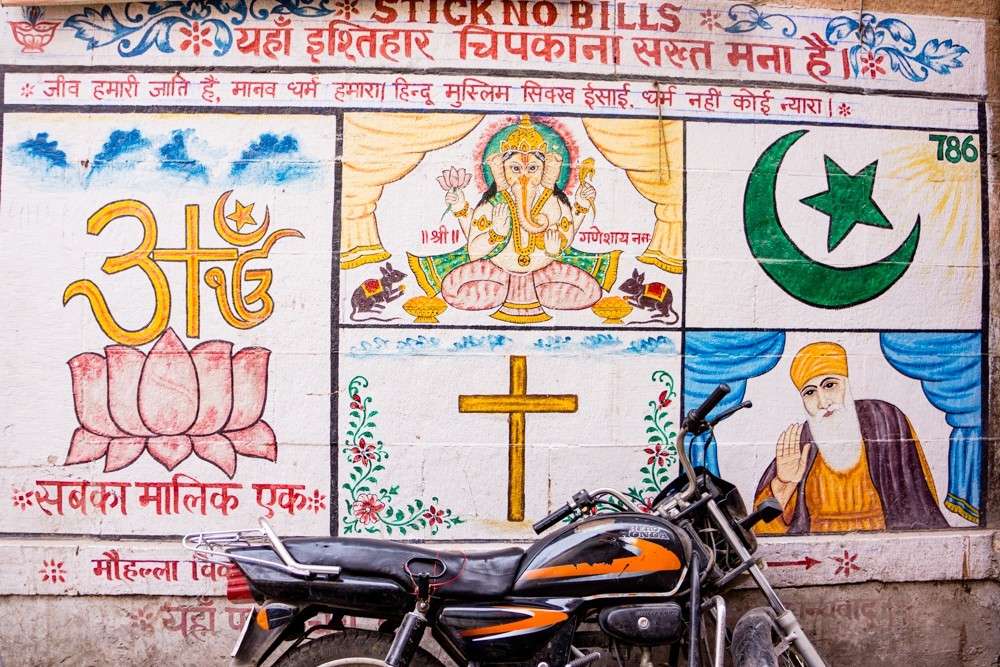 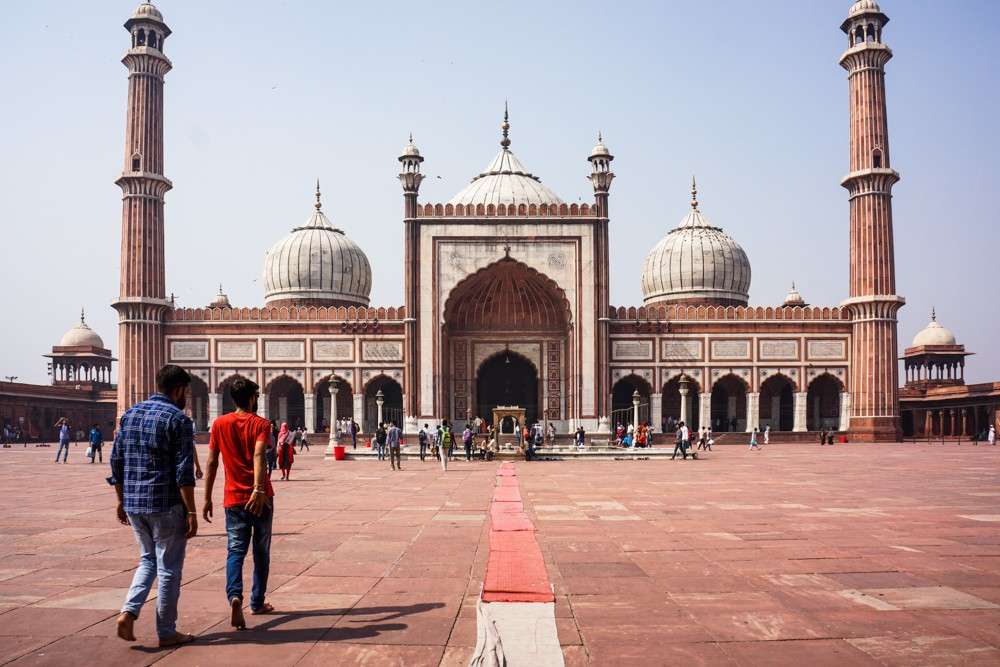 … as tiny as a storefront in Jodhpur … 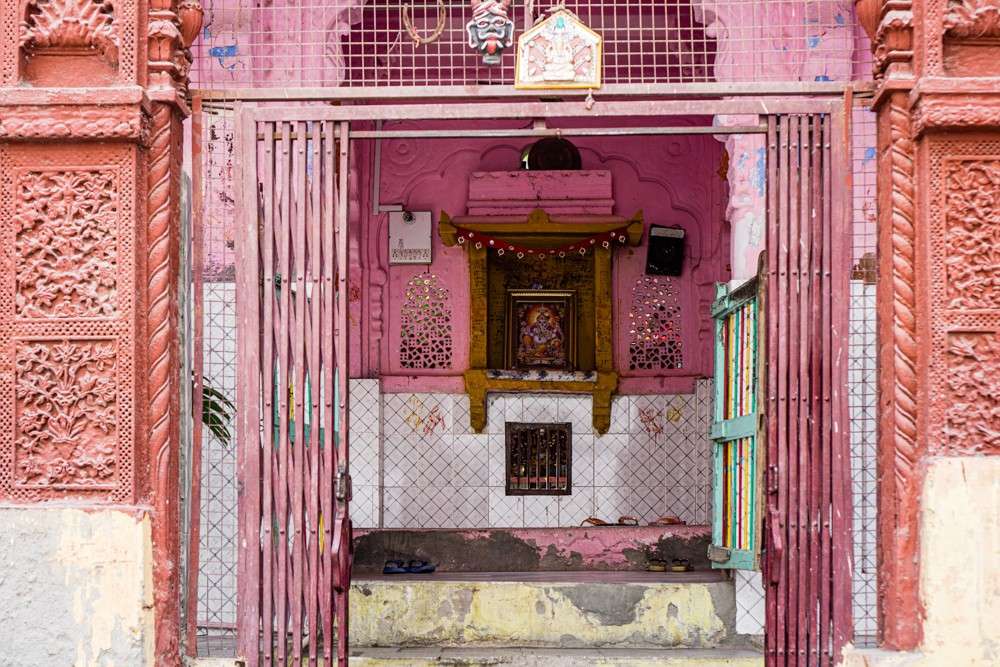 … or this shrine on the banks of the Ganges in Varanasi. 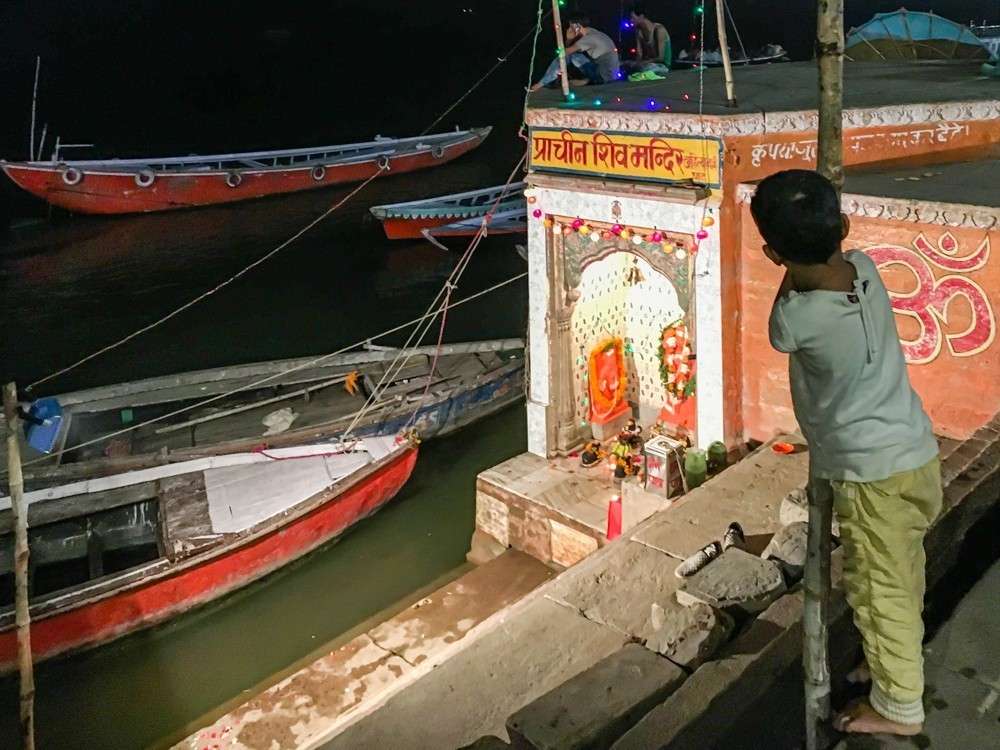 Sikhs, here at the Golden Temple in Amritsar, pride themselves on feeding all who are hungry. 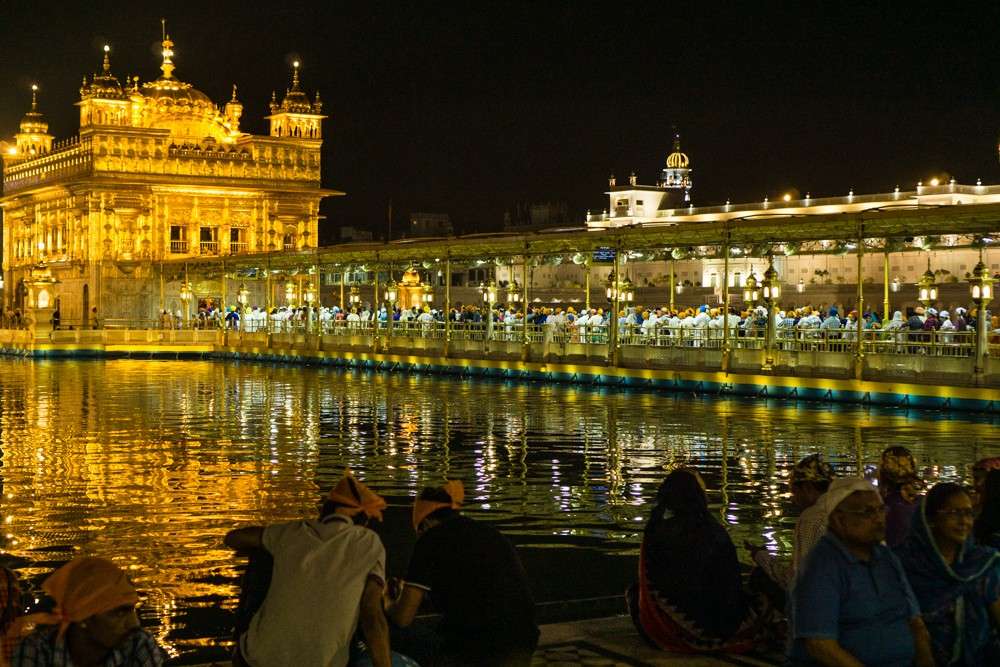 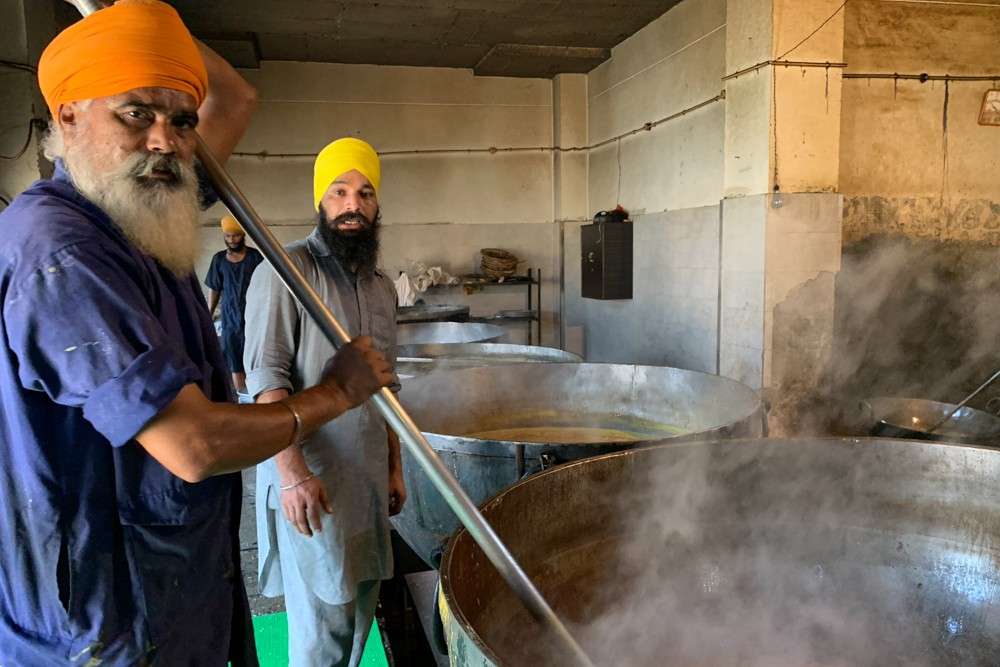 Jains are known for their piety, their non-violence toward all living things, even the tiniest mite, their famous bird hospital in Delhi and this beautiful temple at Ranakpur in Rajasthan. 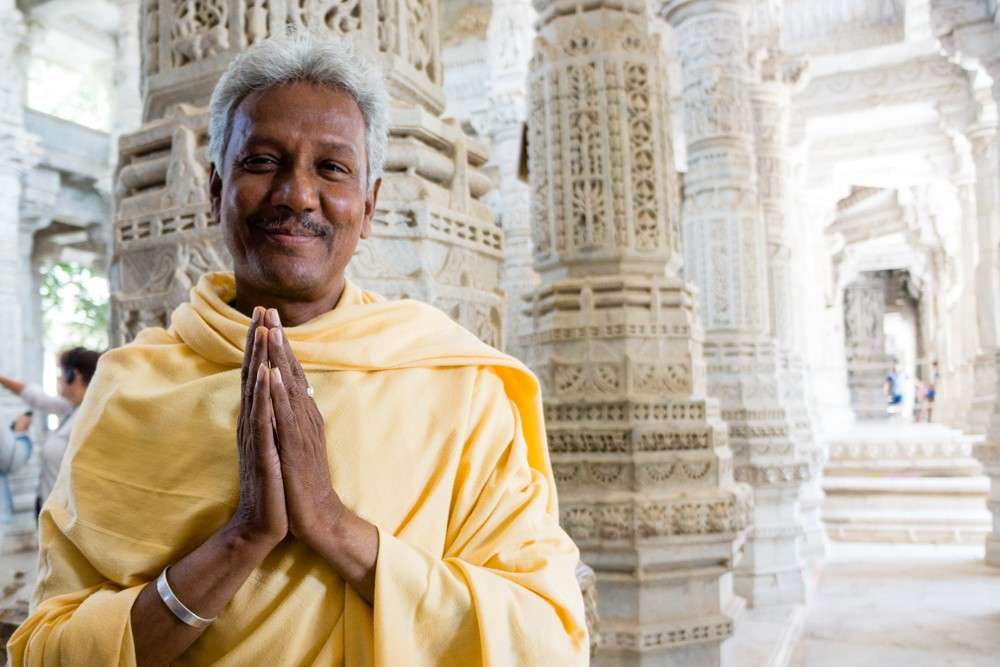 In the windswept foothills of the Himalayas we met a priest who staffs a tiny temple. 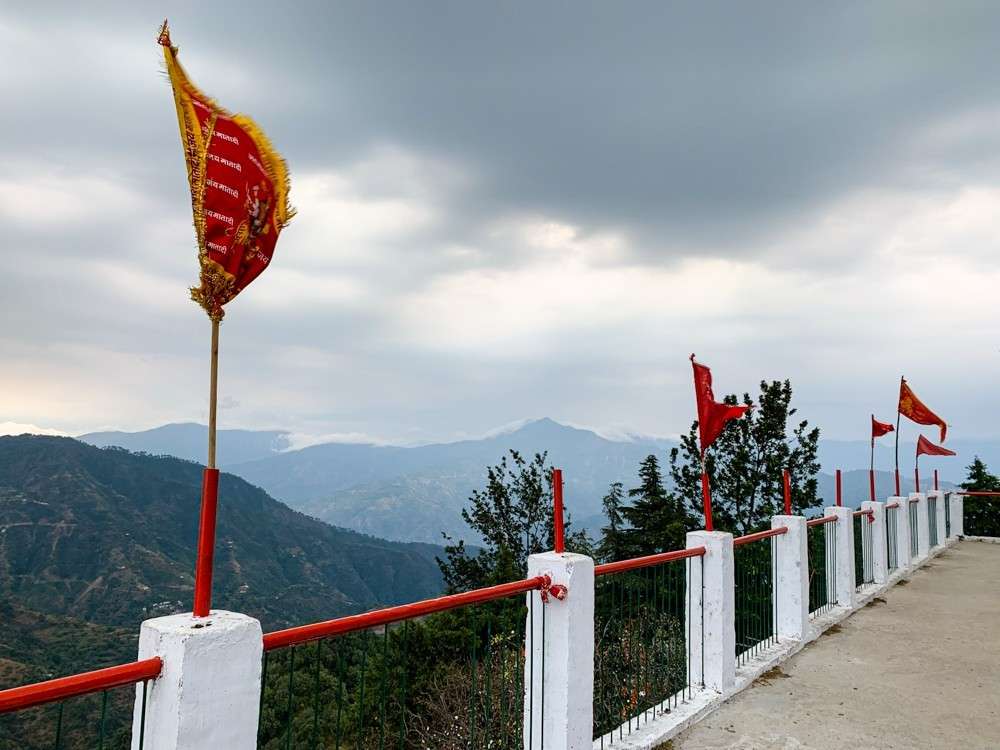 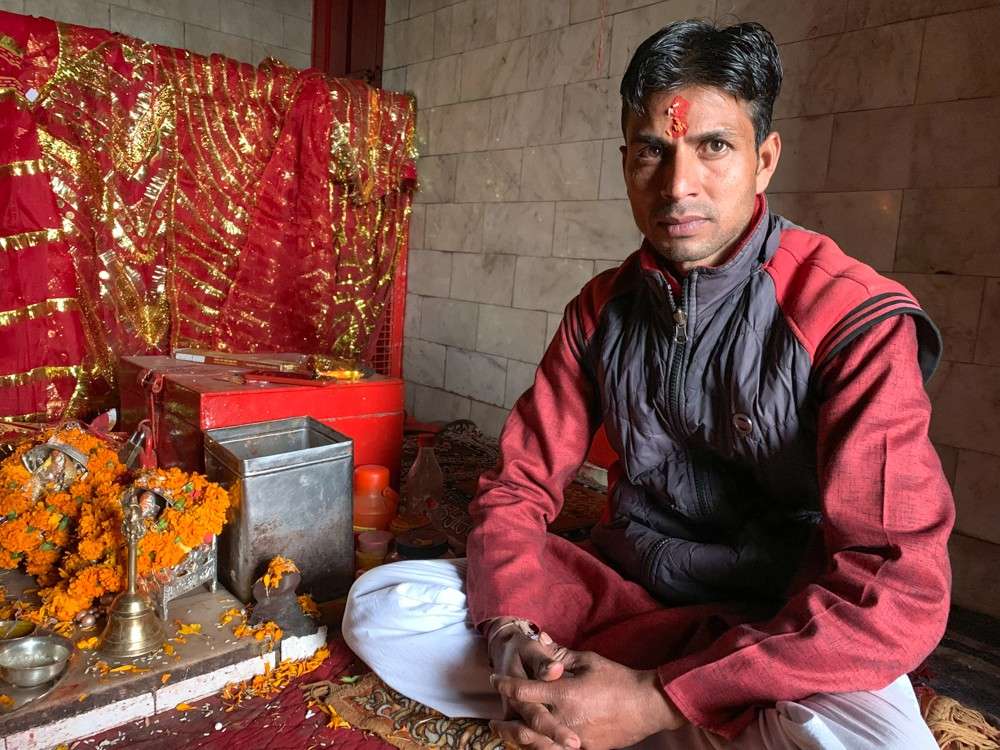 And in a tribal village in the Aravali Hills in Rajasthan, we encountered locals who practice their own brand of Hinduism. 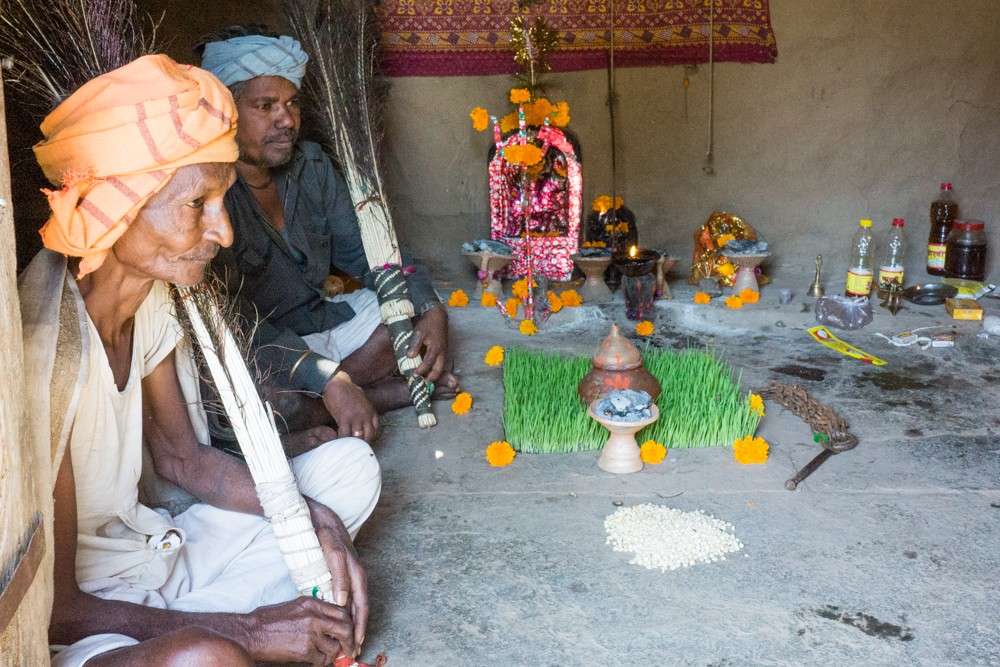 Back in the city of Jodhpur, we visited an urban temple where stopping by for prayers is a daily occurrence. 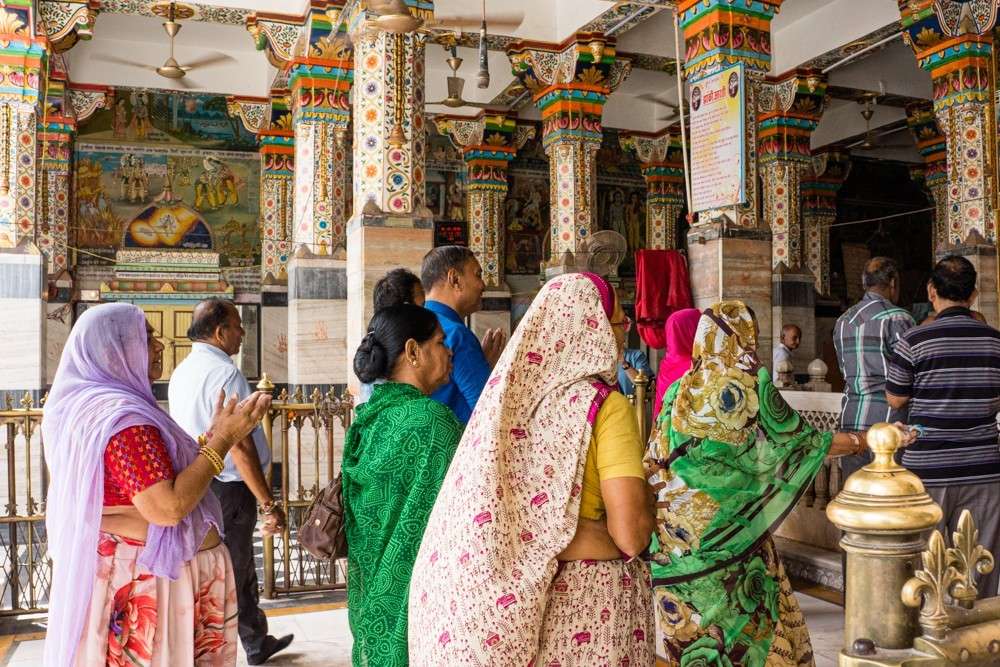 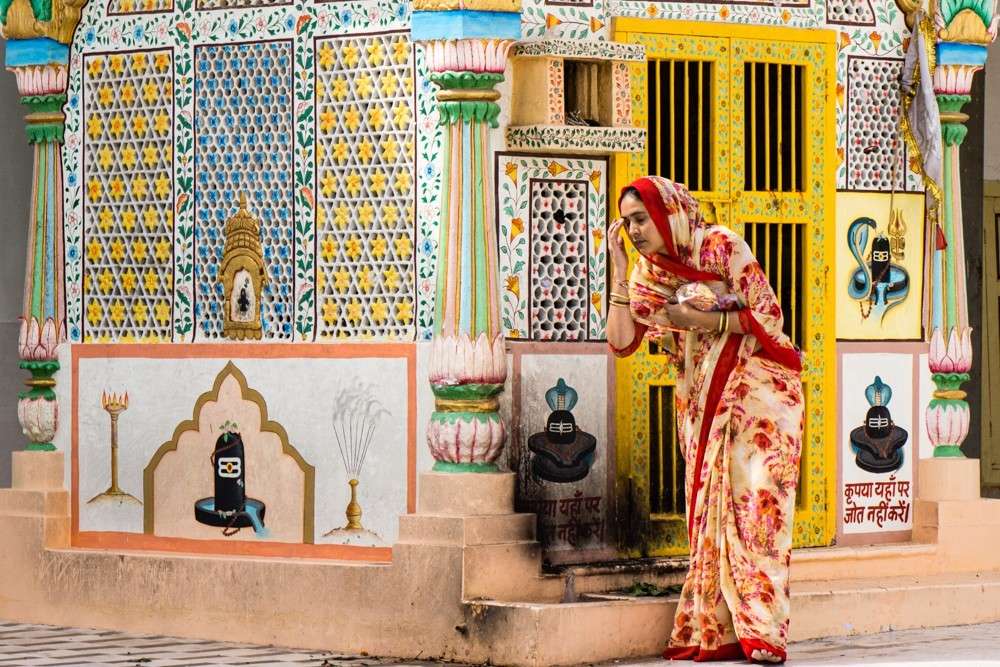 In Mumbai, David and I had the honor of bringing a shofar or rams horn from our San Francisco congregation to the Evelyn Peters Jewish Community Center for its 20th anniversary celebration. 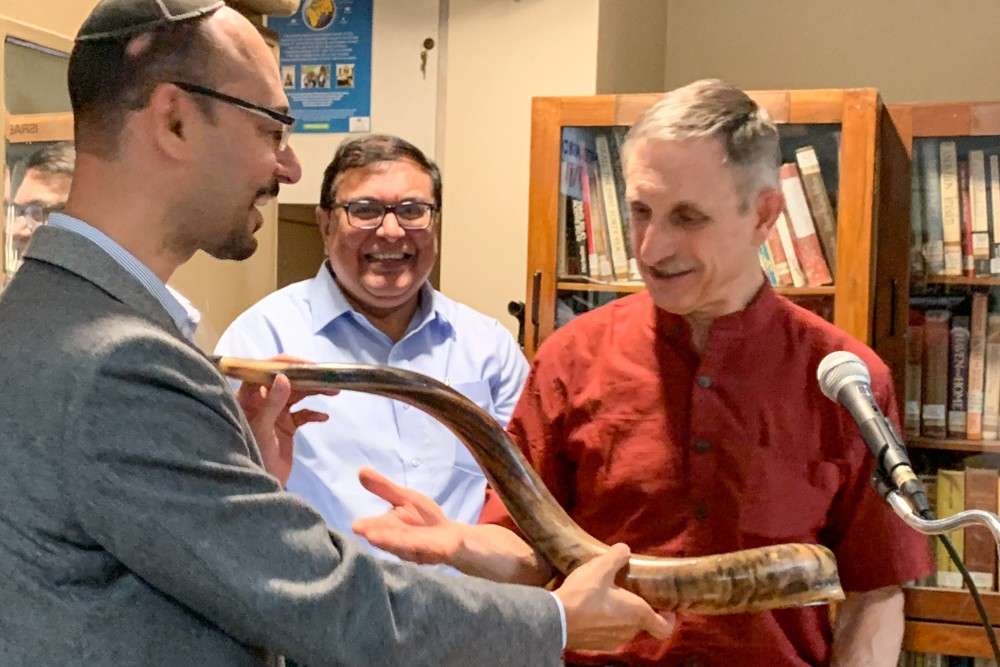 Jewish communities have existed in India for 2,000 years, with many people coming from Persia in the 16th and 17th centuries. Since Independence in 1947, most have relocated to Israel. The people we met here are proudly Jewish and proudly Indian. 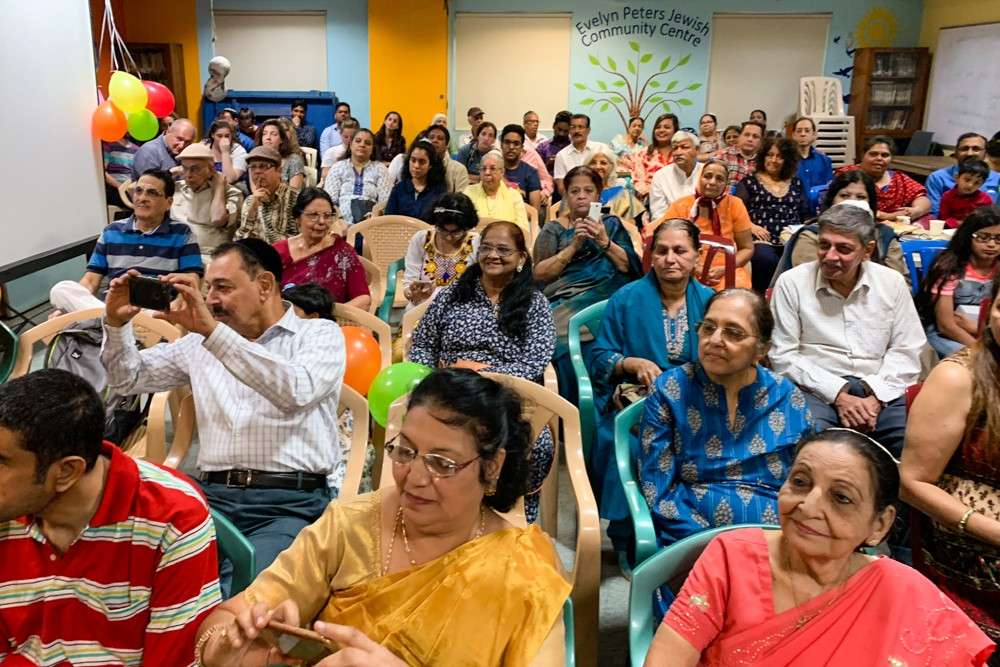 Along the Ganges in Varanasi and Rishikesh

For Hindus, the 1500-mile long Ganges is known as Ma Ganga or Mother Ganges. It is India’s spiritual highway and the source of precious water. People line its banks along staircases known as ghats to immerse themselves in the sacred river, pray and visit. 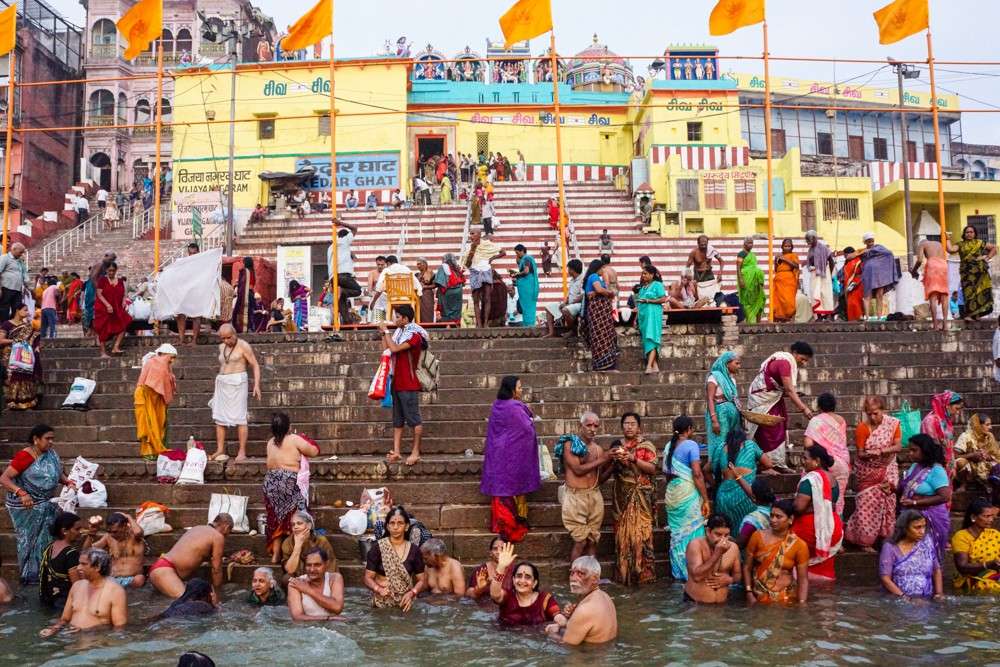 Each evening devotees pay their respects to the life-giving source of water with the thanksgiving ceremony known as aarti, which attracts the devout, the curious, locals and tourists to the banks of the Ganges in Varanasi. 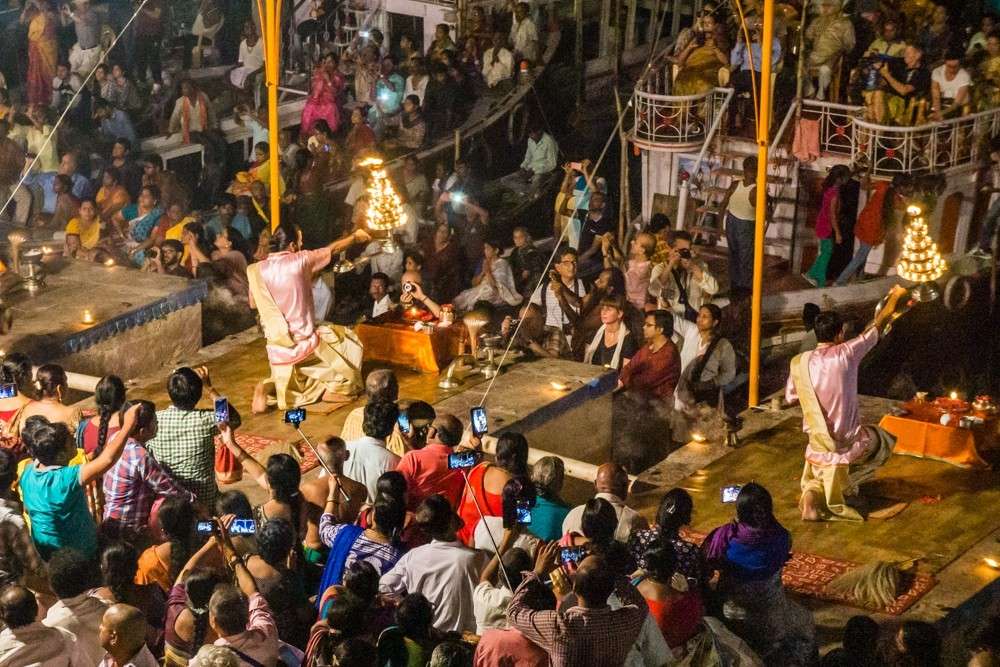 The main elements of Hindu worship are earth, air, water and fire, which are used in ceremonies both public and quietly private as ways to seek blessings from the gods. 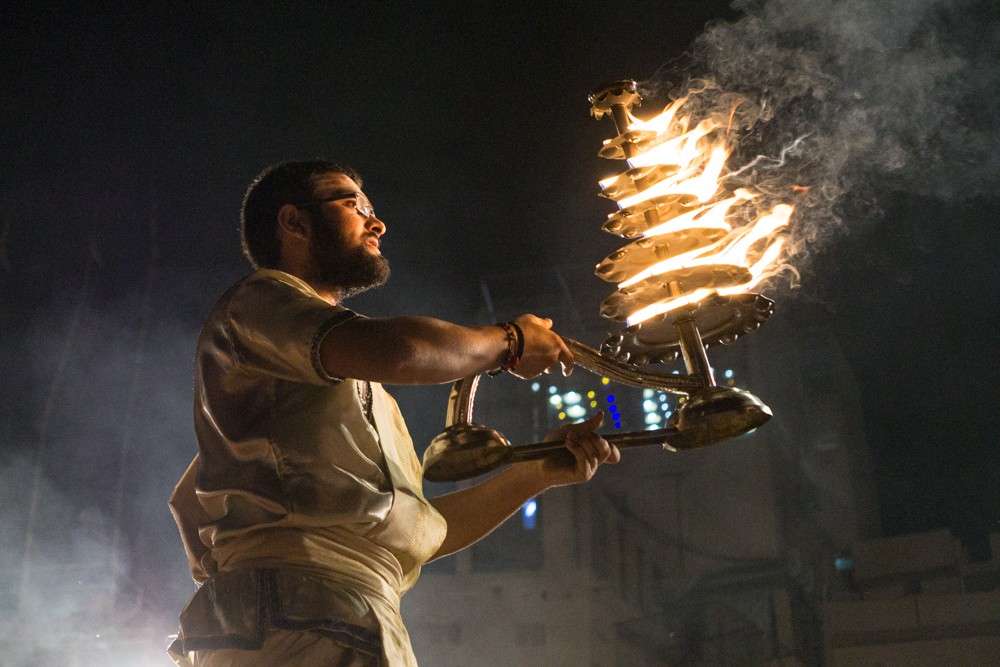 Rishikesh, the town where the Ganges drops down from the mountains and finally meets the plains of India, is where the Beatles hung out with the Maharishi. 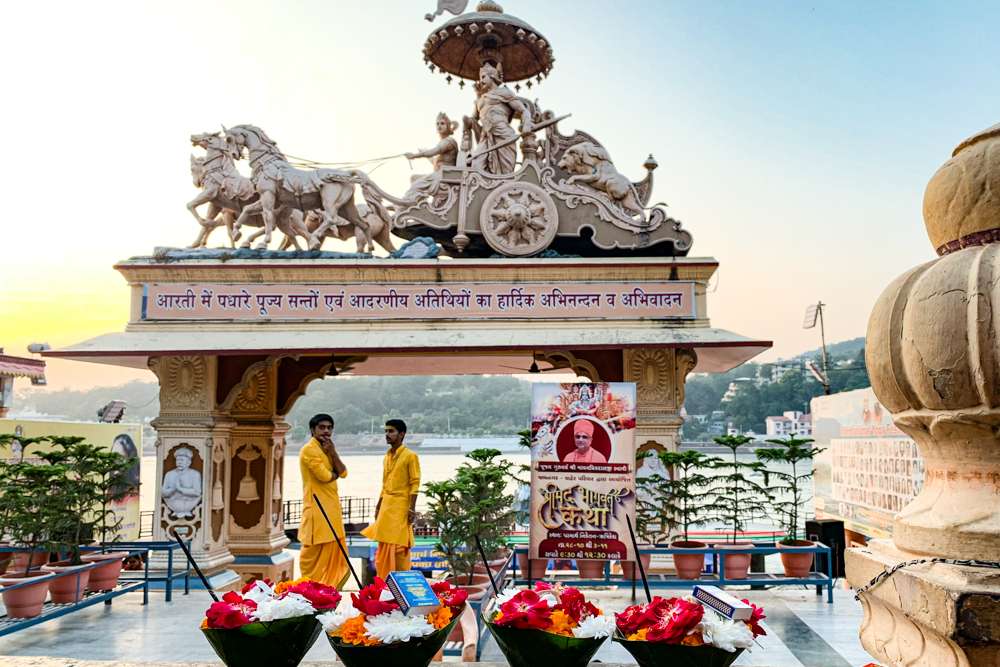 On the Friday night after the Tree of Life synagogue massacre in Pittsburgh in 2018, David and I drove down from a hillside ayurvedic resort to attend the aarti ceremony in Rishikesh, a half-hour away. It was the closest we could come to a Friday night service. 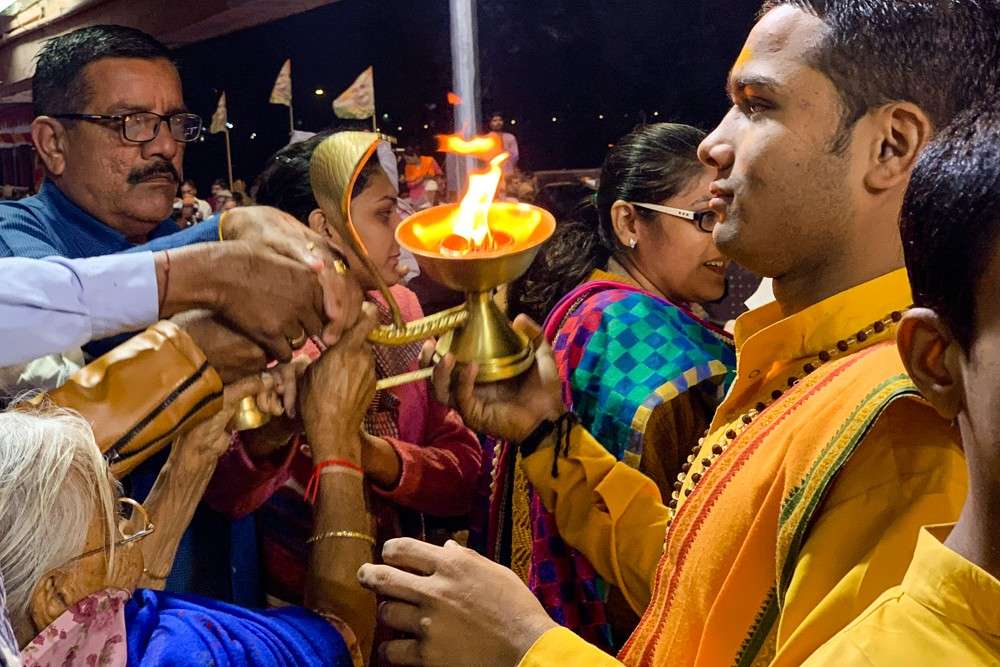 By then, we’d been in India long enough to feel comfortable blending traditions when time and events, loss and sorrow, needed to be marked. 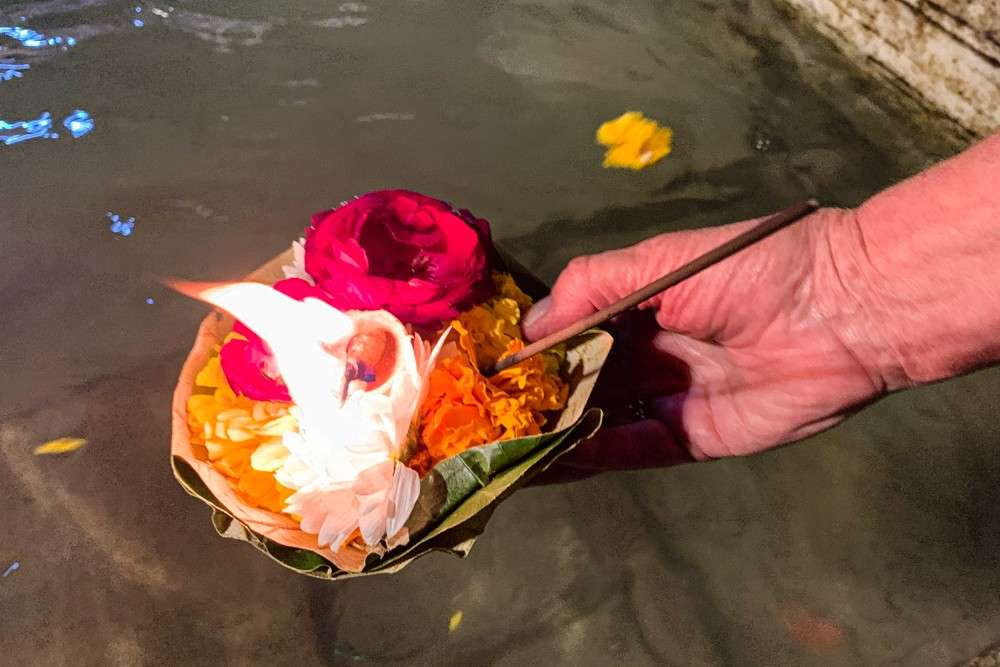 Tamil Nadu in South India is home to some of the largest, most elaborate temples in India, like the Meenakshi Temple in Madurai, below. Originally built in the seventh-century, what we see today is from the 16th and 17th centuries. The building, with its 1500 divine and demonic figures, is the entry or gateway to an elaborate complex that attracted thousands of worshippers per day, pre-Covid. It’s not clear when people will be able to worship publicly again in India. 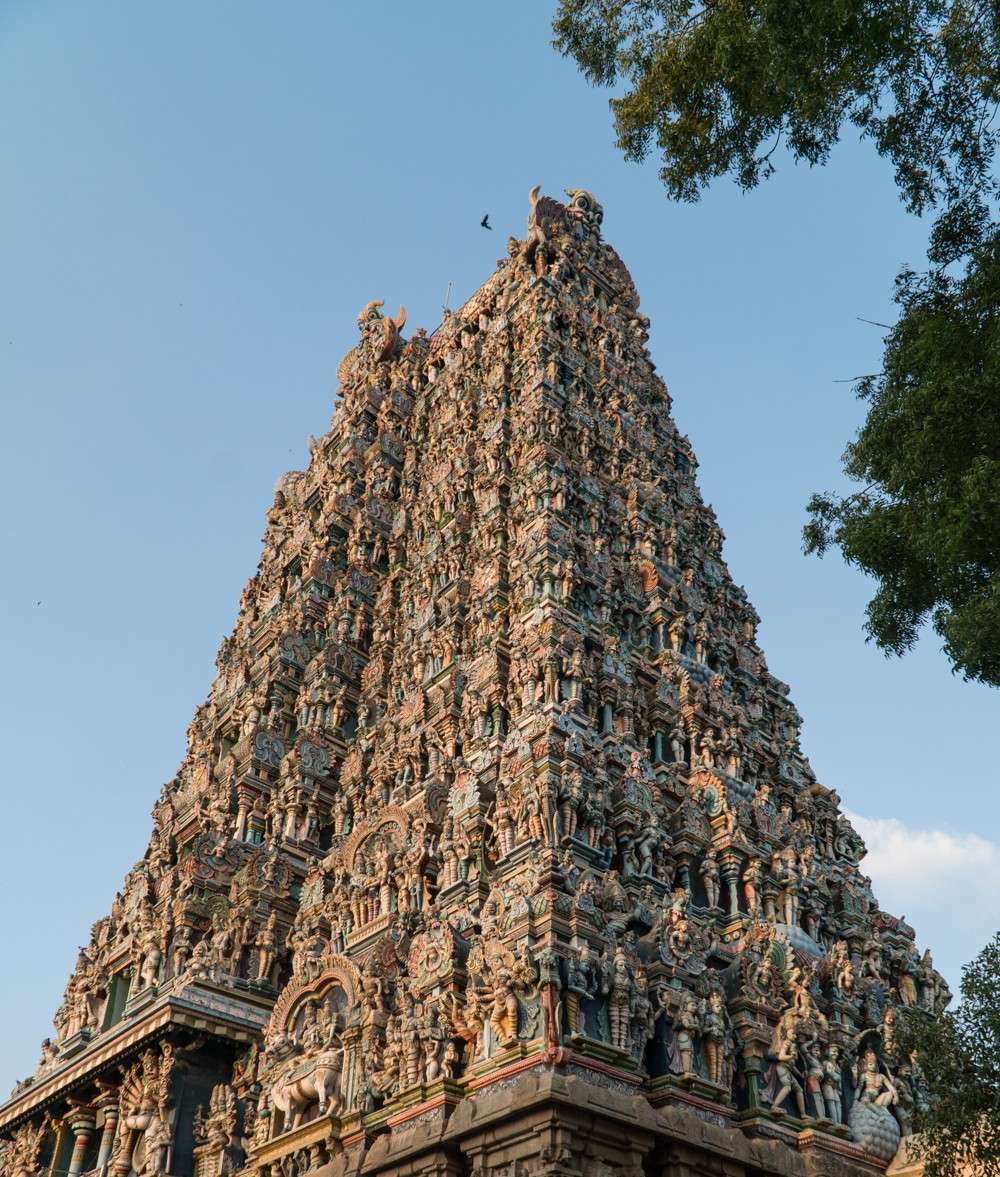 On a more diminutive scale, we were able to visit this personal puja or prayer room for informal worship at a private home in Chennai. 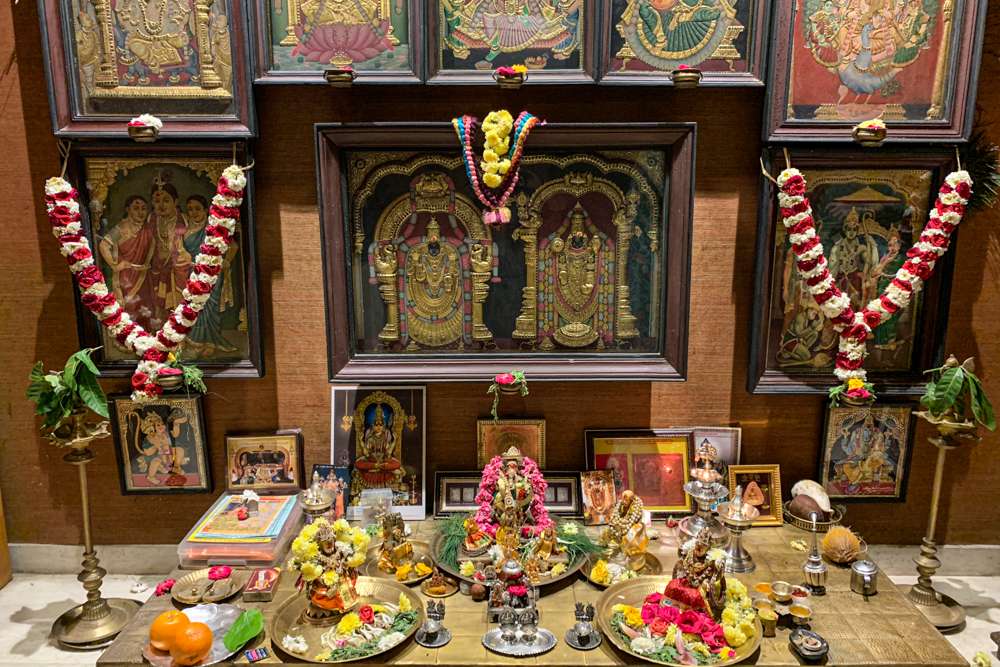 In the city of Thanjavur, we spent an evening at the Brihadeeswara Temple during a festival that drew thousands of worshippers. First we watched devotees give the sacred Nandi (the Hindu god Shiva’s mount) a turmeric bath before dressing it with flowers. 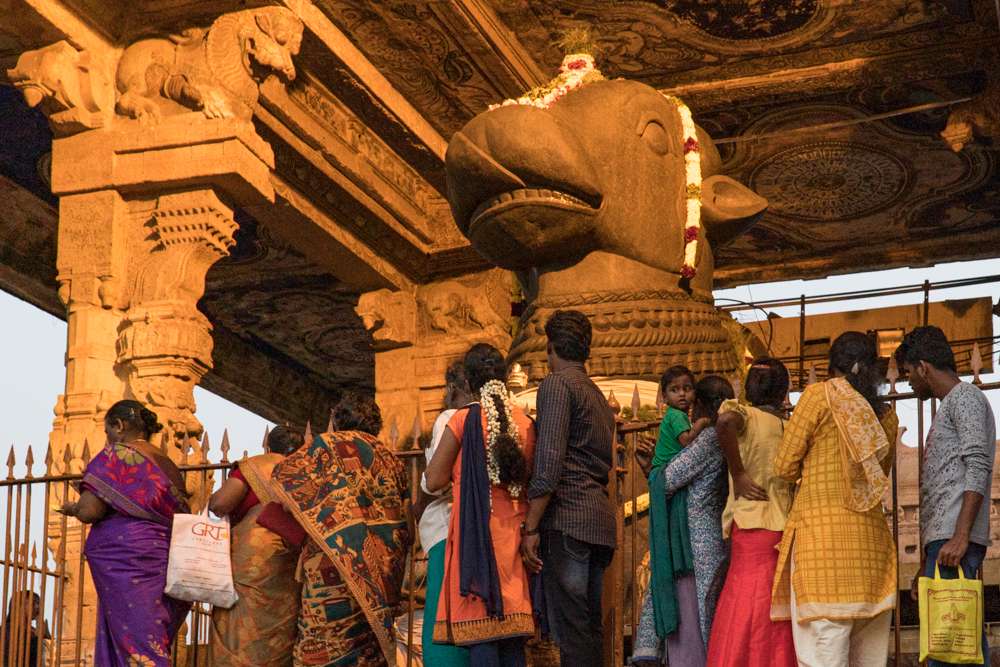 That evening, the temple was like a three-ring circus with many forms of worship all going on at the same time. 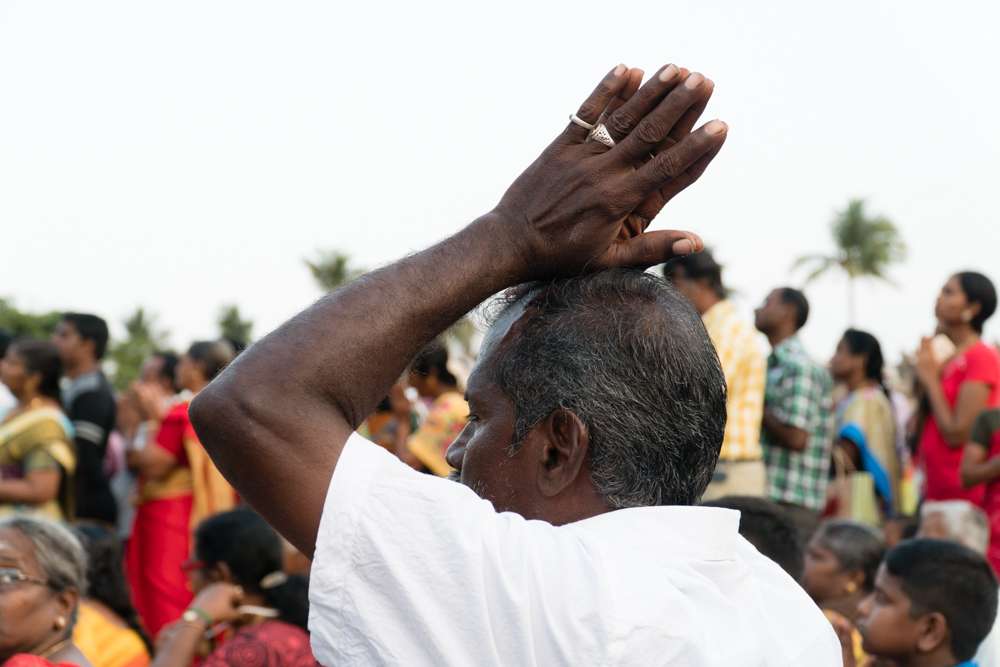 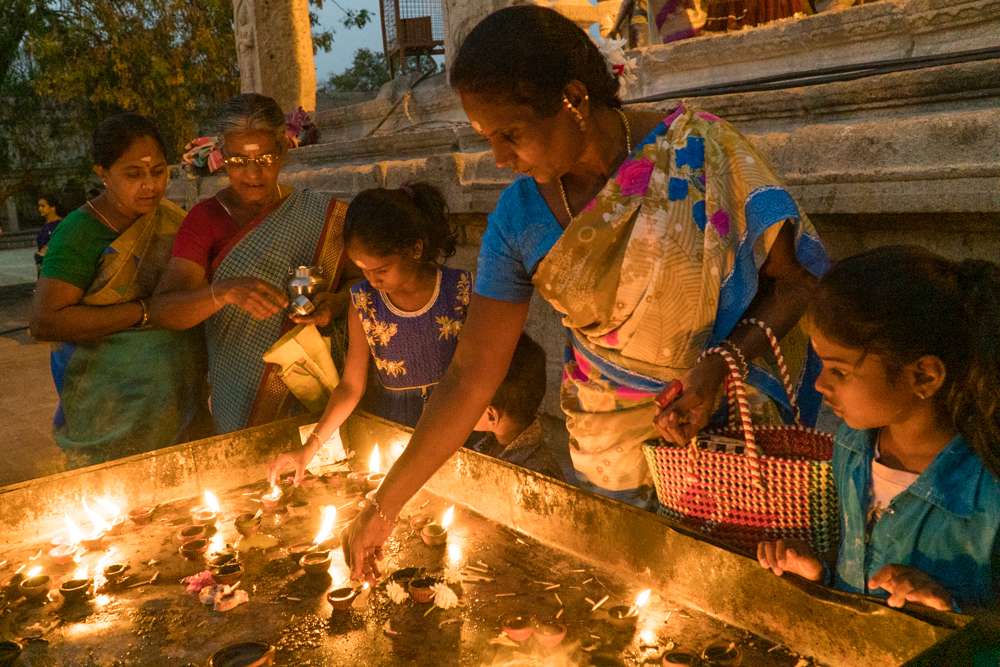 Remember the three brothers I told you about at the beginning? I met them at the Amma Mandapam bathing ghats in Trichy. Families engage priests to help them perform the proper rituals on the anniversary of a loved one’s death, including chanting for 10-20 minutes (depending on how much they want to pay). Chanting is one of many rituals that link family members with their loved ones. 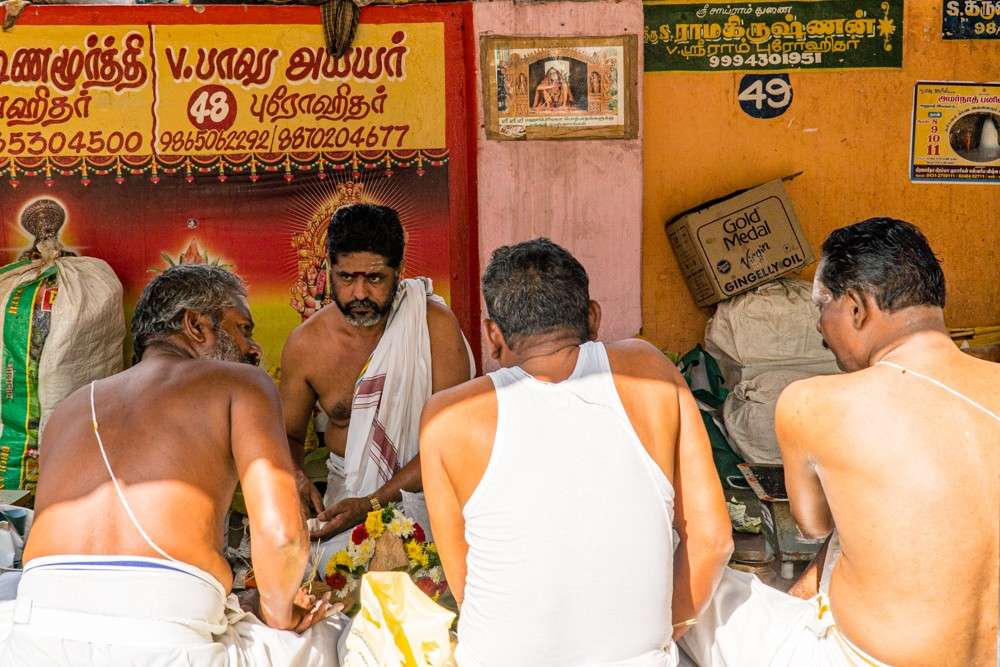 In formerly French Pondicherry, I spent a quiet morning inside the 18th-century Church of the Sacred Heart of Jesus enjoying the reflected light of the stained glass windows. 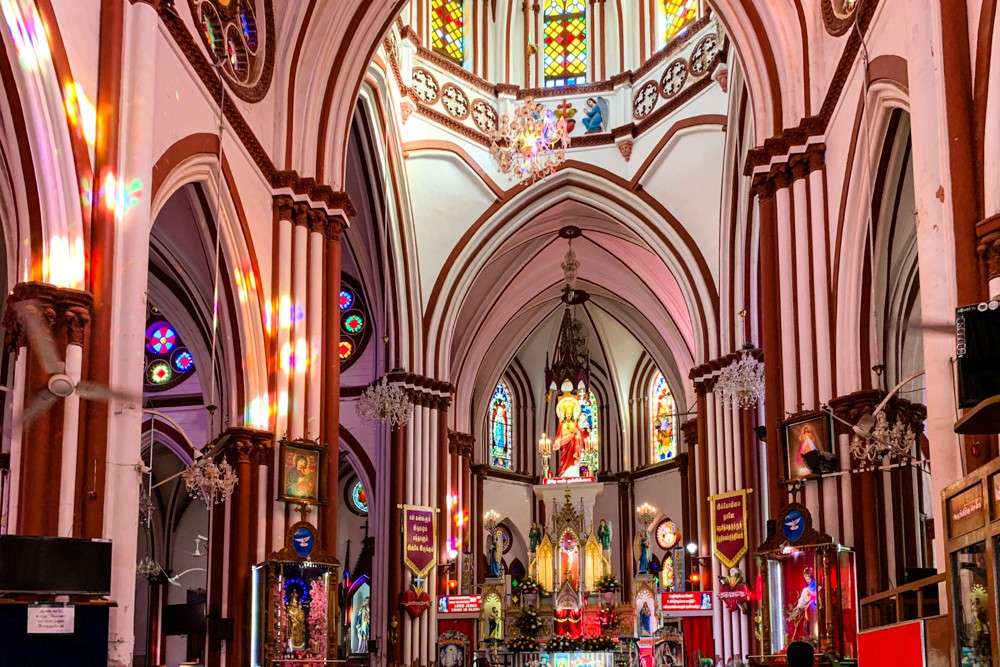 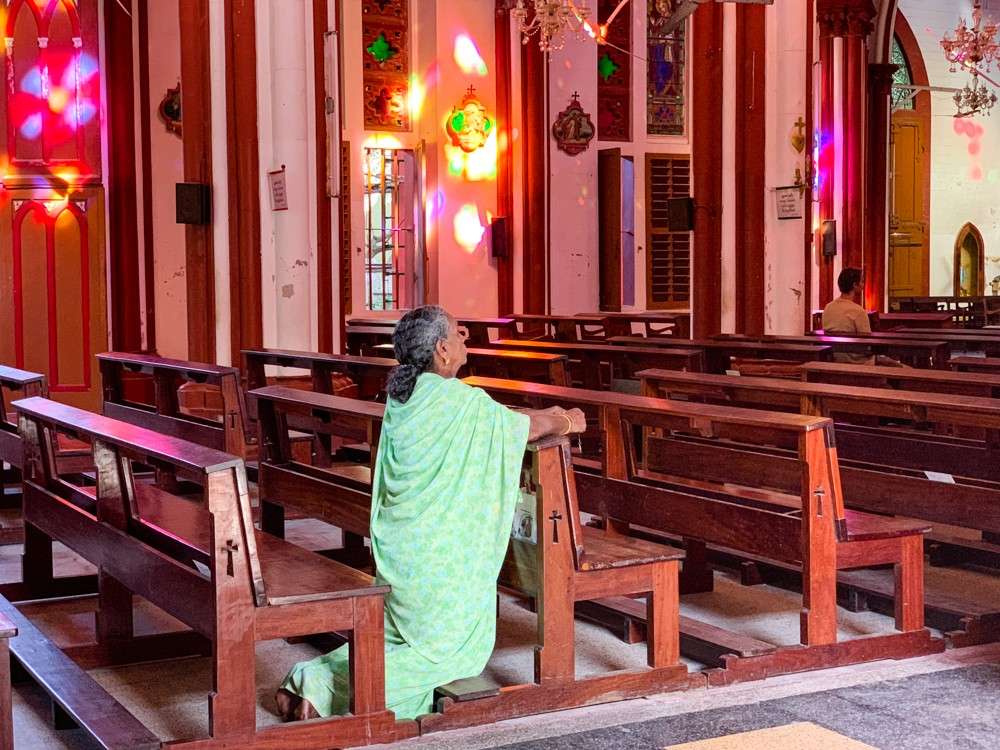 And in a small town in the backwaters of Kerala on the west coast of India, we encountered worshipers at the Chettichaveedu Devi Temple during yet another festival. 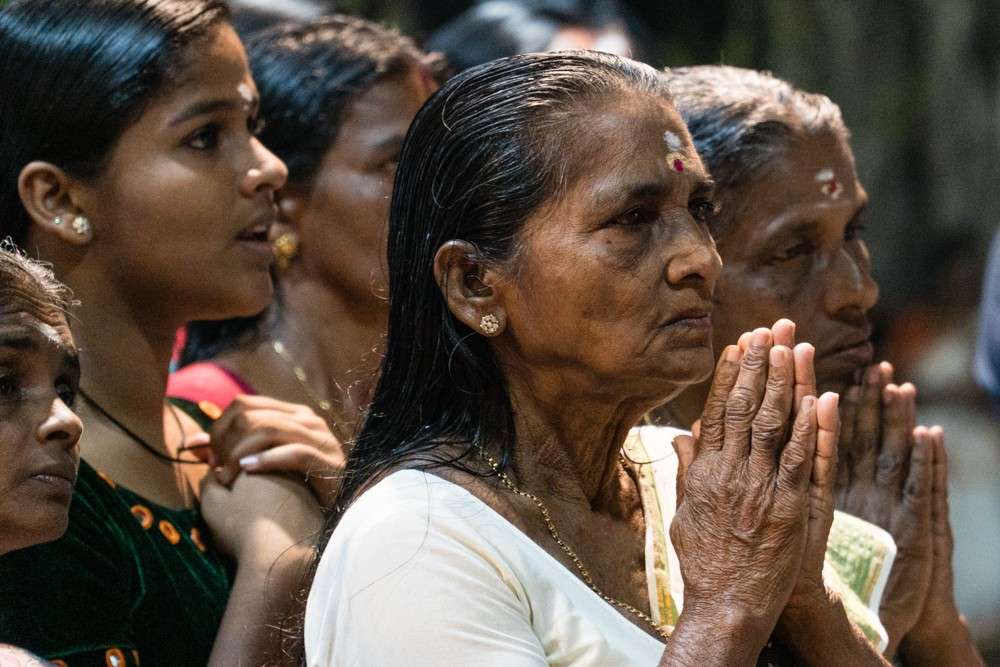 Namaste, India. We see you. We wish you the means to fight this pandemic, good health and good fortune as soon as possible.

For more about the Covid situation in India as well as a list of places to donate, please see the post, News from India.