I inhaled deeply as the waiter brought over steaming copper vessels with long-simmered dal (lentils with cream) and slow-roasted mutton. The rich, earthy aromas reminded me that this was Rajput food, hearty fare for the warrior kings who once ruled this land of princes and palaces, forts and tigers.

Reflecting fondly on that dinner after more than a year of pandemic confinement, I am still trying to digest the fullness of what we saw as we crisscrossed Rajasthan on a two-week photo tour. And I can’t help but wonder when traveling to India will be safe again post-pandemic. In the meantime, there’s lots to savor as I continue to ponder what makes Rajasthan so special. 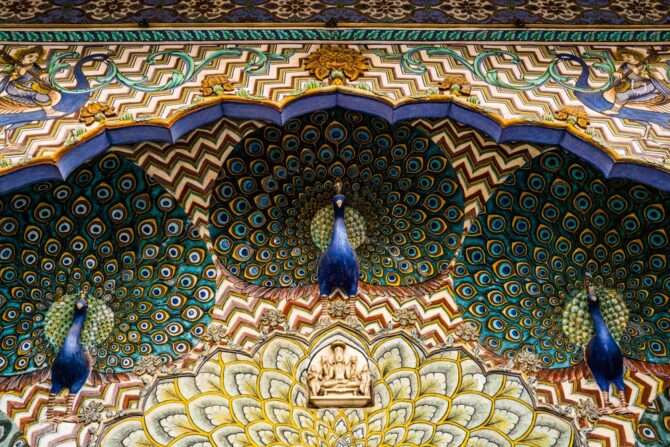 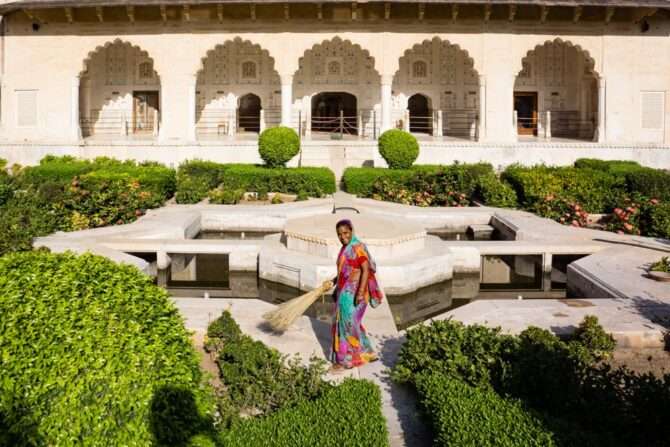 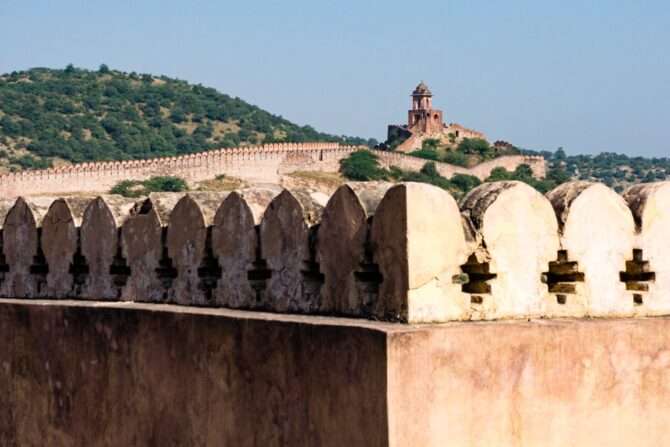 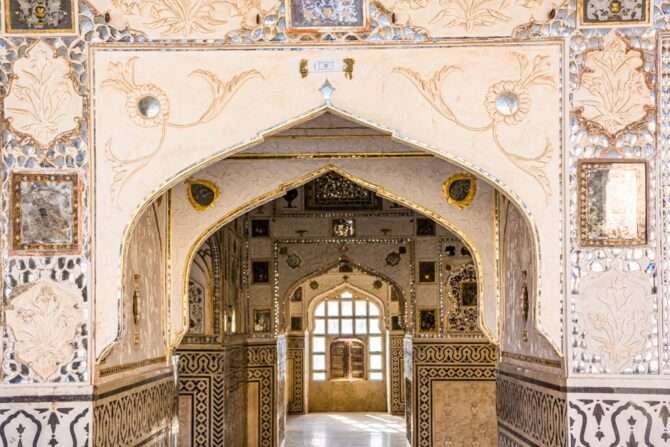 Of all the states in India, Rajasthan comes presold as a tourist destination. Forget fantasy. The actual history of Rajasthan is the stuff of legends. Before independence in 1947, India’s rugged northwest frontier, then called Rajput, was home to 22 princely states known for their royal defenders and beautiful princesses. 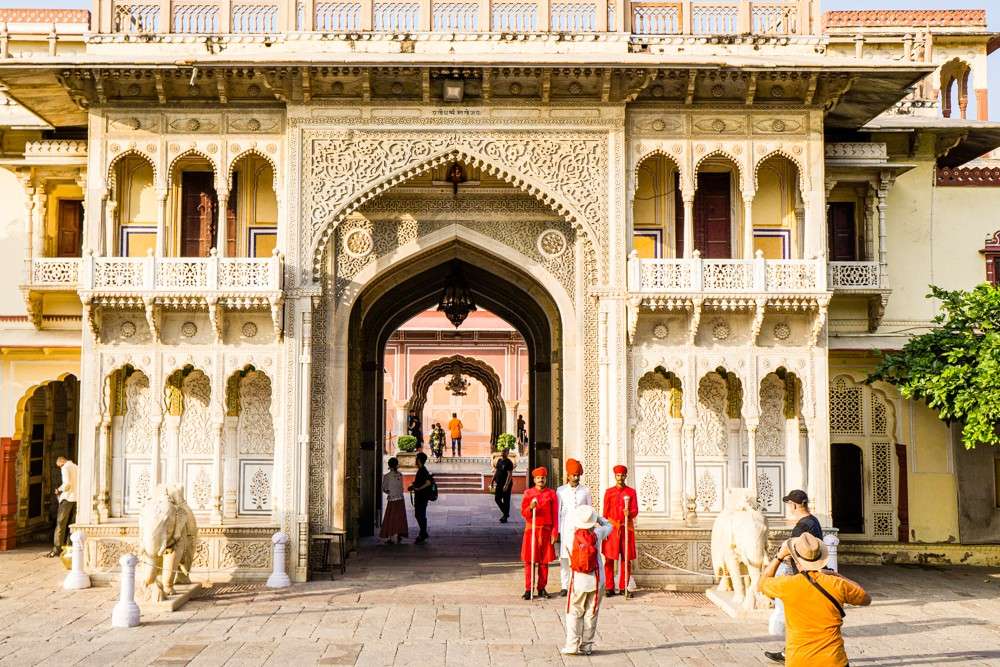 Their former abodes, an opulent embarrassment of forts and palaces built as strongholds against each other and as bulwarks against invaders, dot the landscape and crown parched hillsides. Like so many travelers before us and, I hope, after us, we were lured by the romance of Rajasthan, mythologized by the British Raj, glamorized by Hollywood and further embellished by Bollywood. 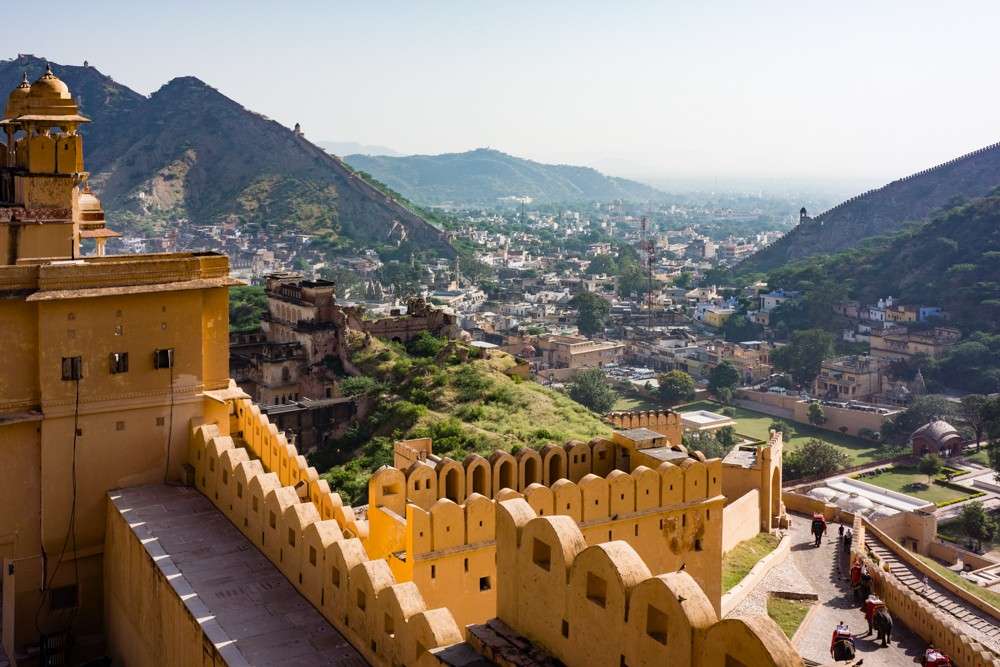 Our encounter with Rajasthan started at Amber Fort, a 16th-century stronghold high on a hillside about seven miles outside Jaipur, the state capital. Surrounded by scrubby plants and encircled by walls beyond walls, the fortress glowed in the early morning light. The scale was astounding, almost overwhelming. I couldn’t take it all in, let alone photograph it. I tried to imagine the power it would have projected to the villagers or enemy below during its centuries as an active fort. 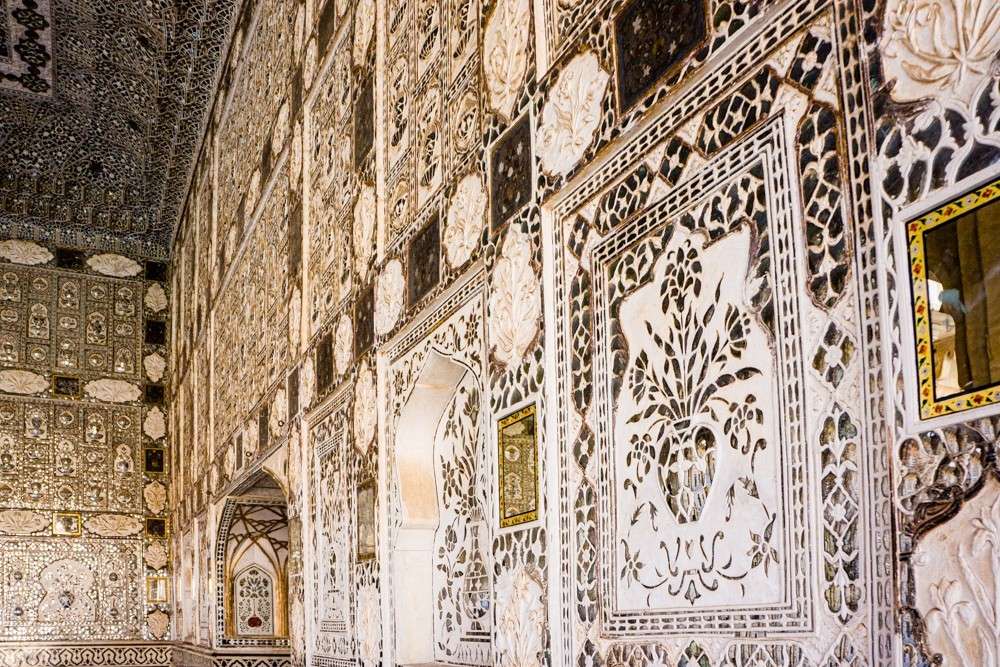 I settled into the shimmering Sheesh Mahal or mirrored palace, fascinated by the grace of the receding arches, sparkling mirrors and Mughal-style mosaics. A guard took a fuzzy picture of me in one of the antique mirrors. Behind me, over my reflection’s shoulder, I saw another range of hills above us, topped with yet another fort standing sentinel over Amber. 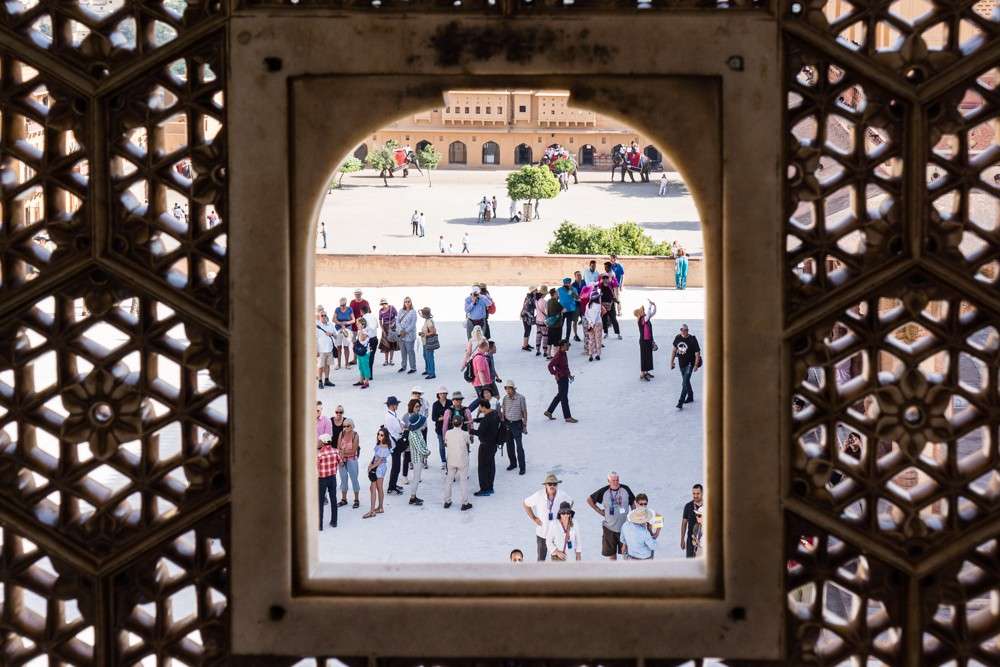 As I explored further, I came across a walkway with an intricately carved marble screen three floors above the ceremonial courtyard known as the Hall of Public Audience. That’s where the maharaja met with his officials and local residents. The secluded area upstairs was for the royal women, who lived in the zenana or women’s quarters, separated from the men.

When I went back downstairs, Virendra Singh, our local guide, explained that the court ceremonies were witnessed by all the royal ladies. “It was essential for each and every queen to be part of the court,” he said. 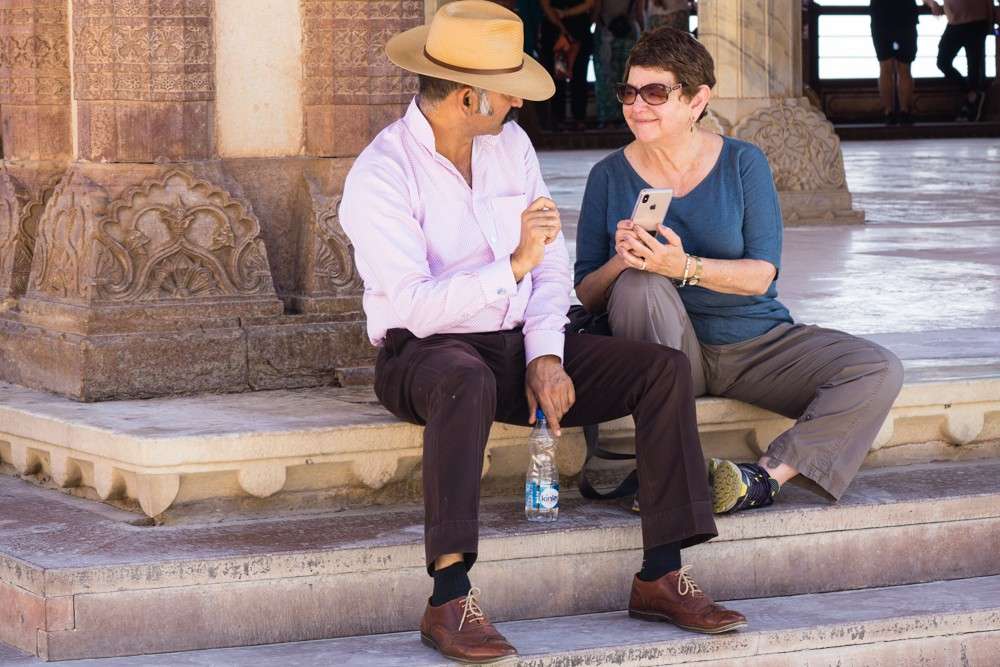 “The royal women could express their opinions, but could not speak in public. Their assistants, the ladies, the maids, would relay their views,” he told me. It all sounded like a terrible game of telephone. Later, after reading A Princess Remembers by Gayatri Devi, the last maharani of Jaipur, I learned that in some Rajasthani kingdoms the tradition of purdah, of royal women living in separate apartments behind a veil or curtain, continued until Indian independence upended the royal order.

Looking down to yet another level of the massive fort, I saw a pageant straight out of the historical royal playbook. A parade of elephants, clad in blue and red trappings and guided by their trainers or mahouts, ferried tourists up the steep switch-backed trail to Amber Fort. 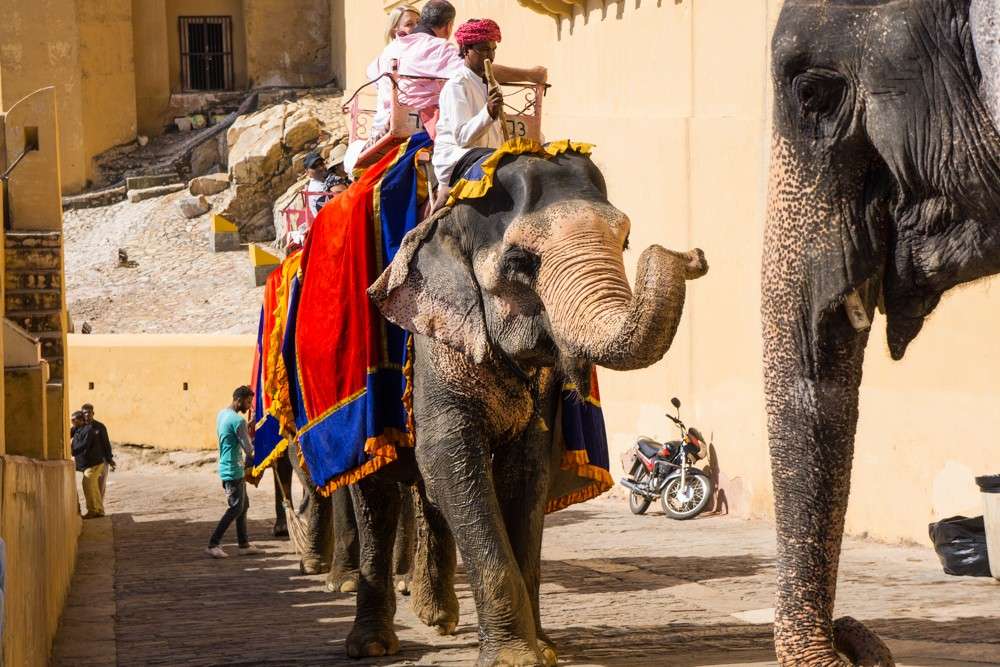 The elephants’ soulful eyes, floppy ears and expressive trunks caught my attention. Even carrying tourists in t-shirts and baseball caps, they looked regal entering the tall narrow gate before circling the maharaja’s parade ground. Elephants were not only excellent transportation for the kings and their retainers, but powerful symbols of the exalted power, prestige and position of the maharaja. 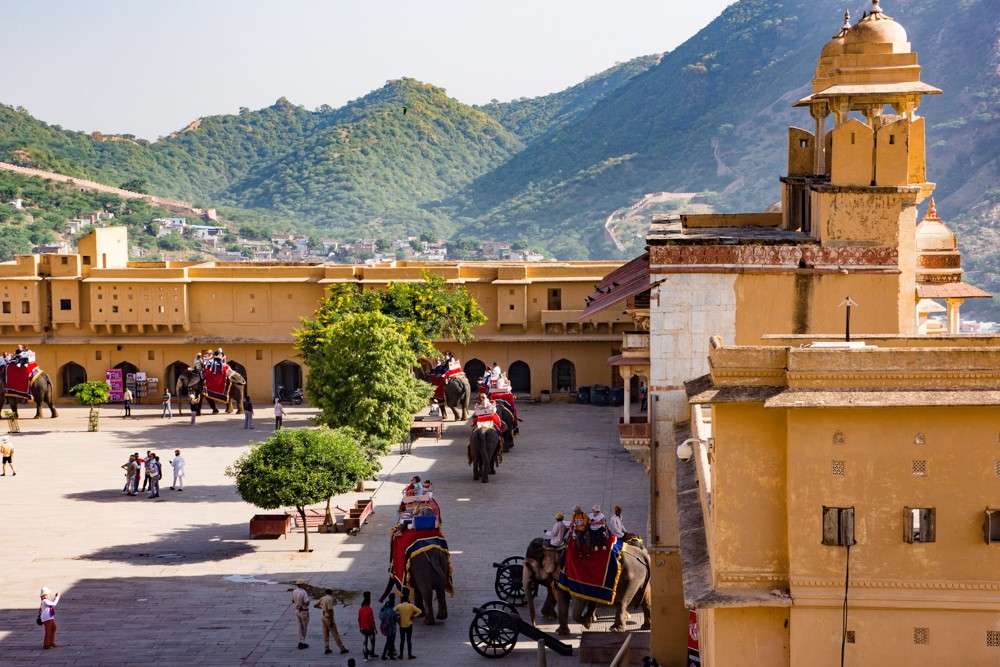 Wandering down the same switchbacks on the way to our bus, I started to reflect on the puzzle that is Rajasthan. The region was wealthy. Very wealthy. The Aravalli Hills concealed a treasure in marble, copper, rubies, emeralds and silver. Its people were fierce warriors. They had to be. Invaders from the north and west (ancient kingdoms from today’s Pakistan and Afghanistan) and the Mughals, a 16th-century warrior civilization from today’s Uzbekistan, imprinted themselves on the land. As visitors, we could see the influence of those Islamic cultures everywhere. In the extravagant style of the forts and palaces, for sure. In the colorful clothing—everyday dress, not costumes. And in the art we glimpsed along the way.

Under the guidance of our photo tour leaders David Robbins and Abhishek Hajela, each superb photographers with a deep love of India, our band of seven aspiring photographers crisscrossed Rajasthan on a magical history tour that took us beyond the well-worn tourist path. We explored tribal villages, obscure farm towns and its celebrated cities. 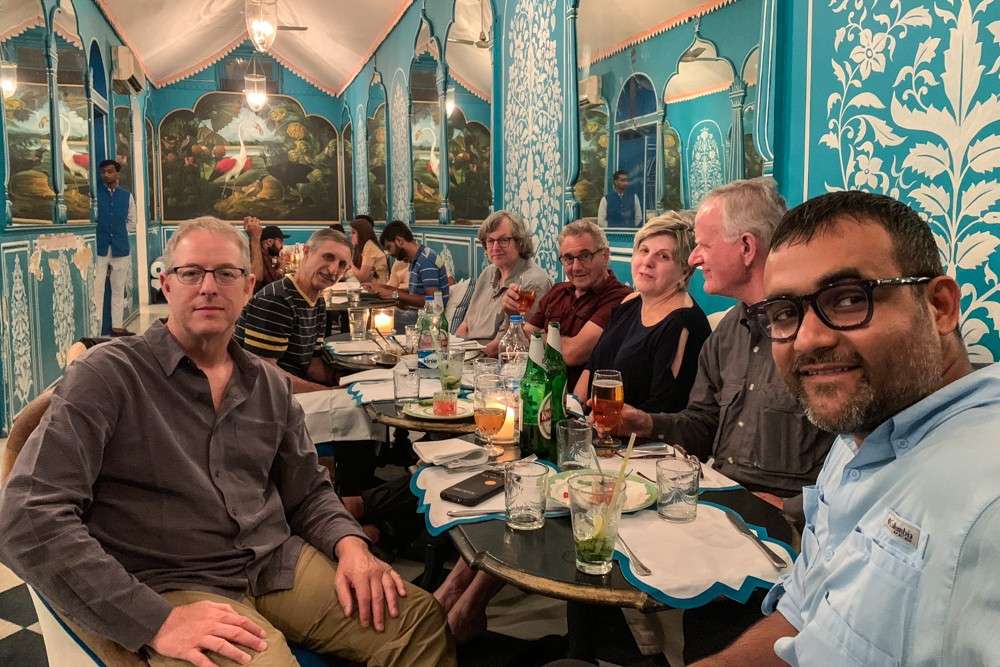 According to Abhi Hajela, our mentor for understanding India, Rajasthani magic has a lot to do with people’s pride in their homeland’s layered history. “Rajasthan is India’s cultural capital,” he said, reminding me that each area has its own food, dress and religious nuance. “The kings who used to live here liked to show their friends around the local villages. The people are hospitable by nature, and the area has lots of wealth and the most beautiful forts and palaces in India.”

Peeking into royal life in Jodhpur and Udaipur 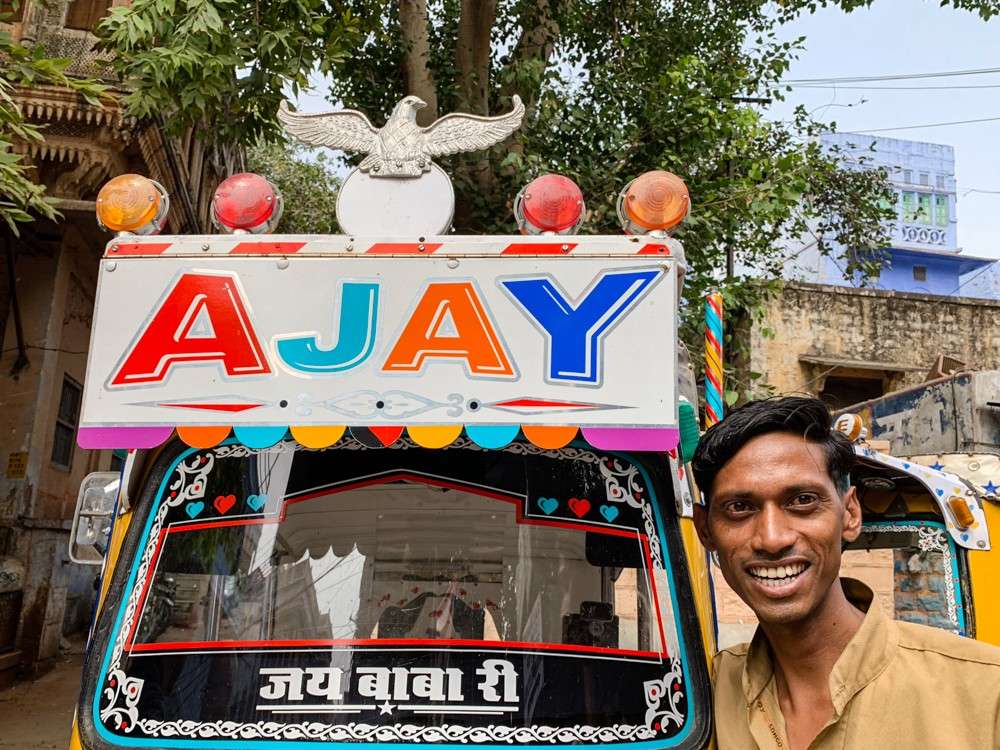 The delightful Ajay ferried us up the winding road from the iconic blue city of Jodhpur to the massive Mehrangarh Fort, where we were greeted with a “CAUTION, Risk of Falling” sign. 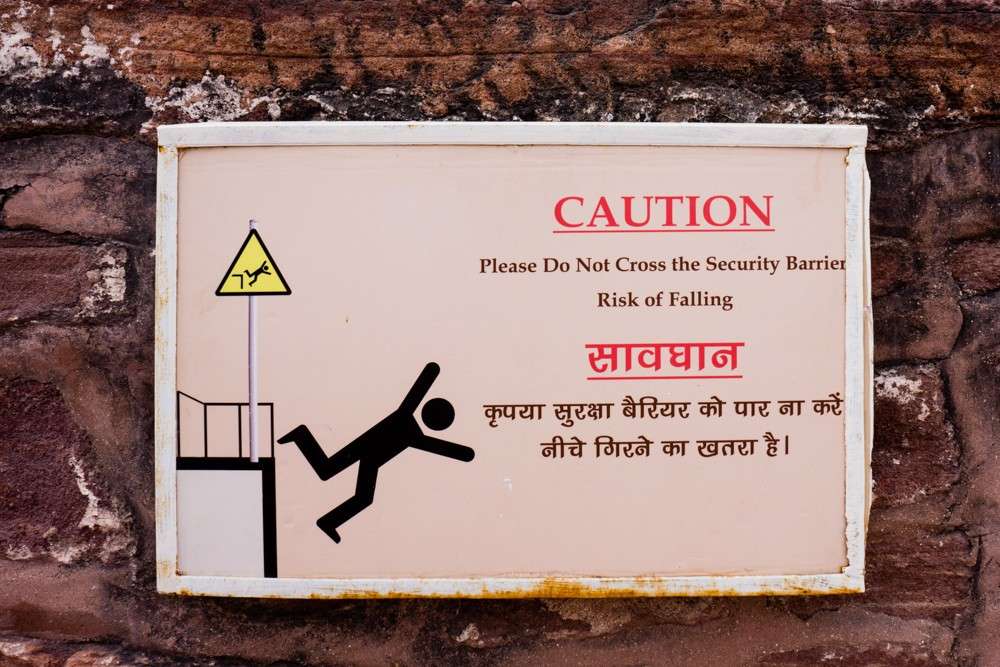 Growing almost organically out of a sandstone plateau, the 15th-century monument reminded me of Edinburgh Castle, towering over the town below. 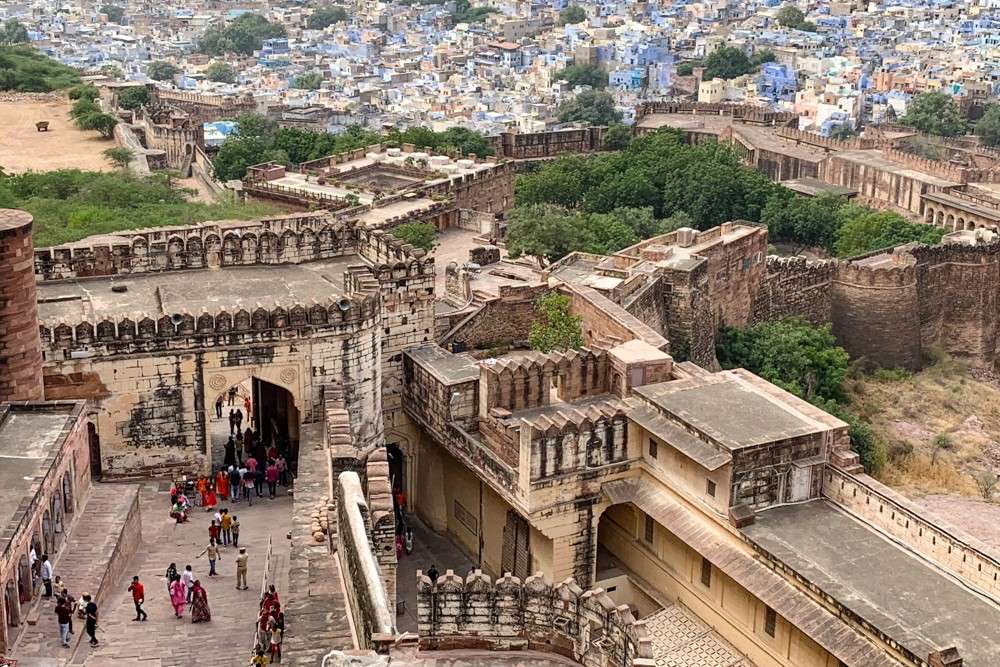 We trudged further up the ramp to a café where portraits of the maharajas who once ruled there looked down on us as we had lunch. Inside the palace section of the fort, now a museum, we glimpsed the lives those maharajas lived.

My favorite spot was an opulent retreat room set up for a 19th-century maharaja that just radiated power and pleasure. We were told that he had 30 queens and numerous concubines. A low table near the royal bed was set with a parcheesi-like game, which, our guide suggested with a wink, was used to select the maharaja’s partner for the night. Marriages among Rajput royal families were political, critical to forming alliances and creating dynasties. The concubines, we assumed, were for pleasure. 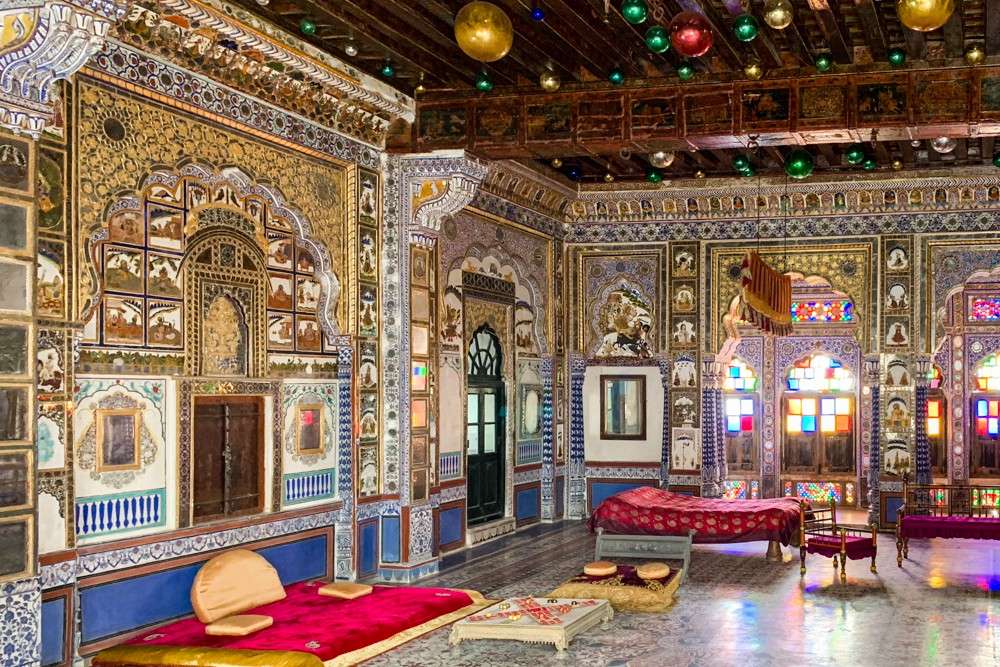 Walking through the maze of hallways, we stopped for our own moment of Zen-like pleasure when we came upon a musician playing traditional Indian instruments. He was selling CDs, of course, but we didn’t mind. The respite added to the illusion of visiting the palace when it was still alive with guests, wealth and influence. 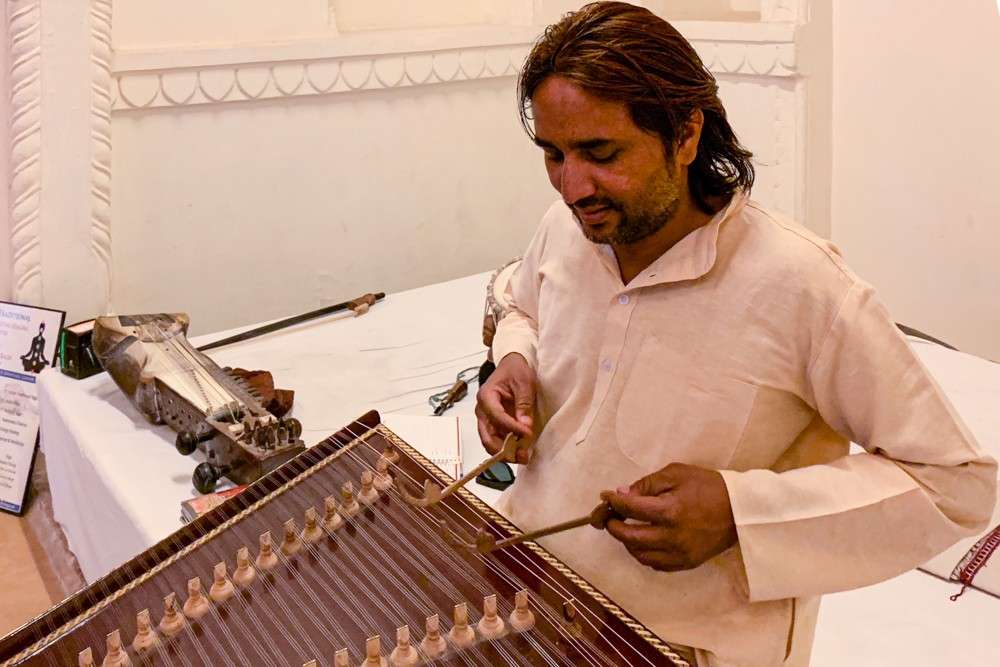 After our break, we climbed to yet another floor where we were ushered into the Hall of Private Audience, glowing with stained glass and set with a red velvet throne for the maharaja and red pillows along the side of the room for his ministers. It definitely beats a Zoom room! 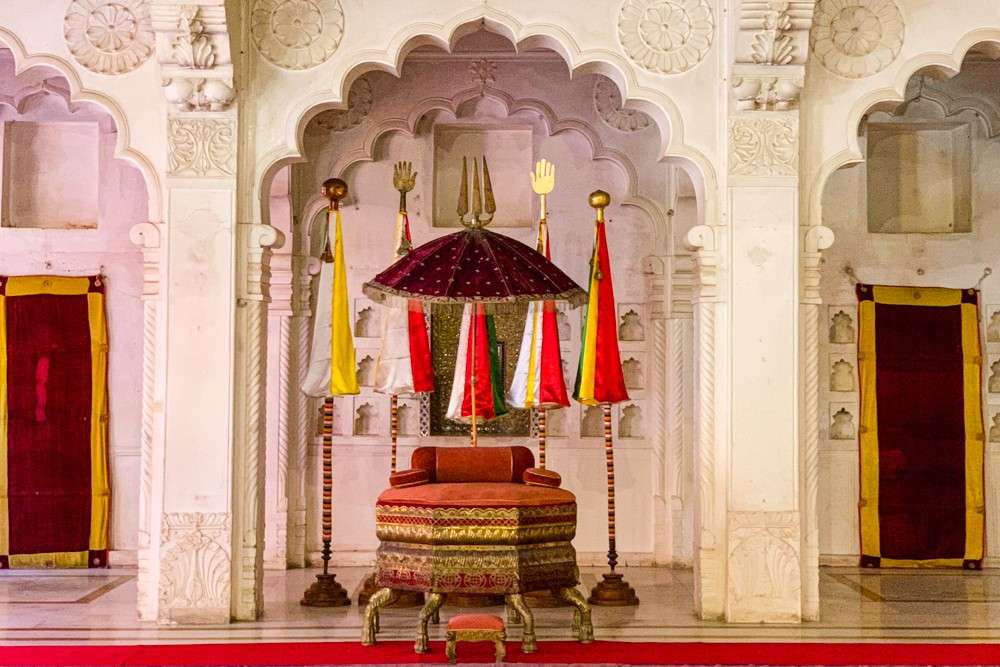 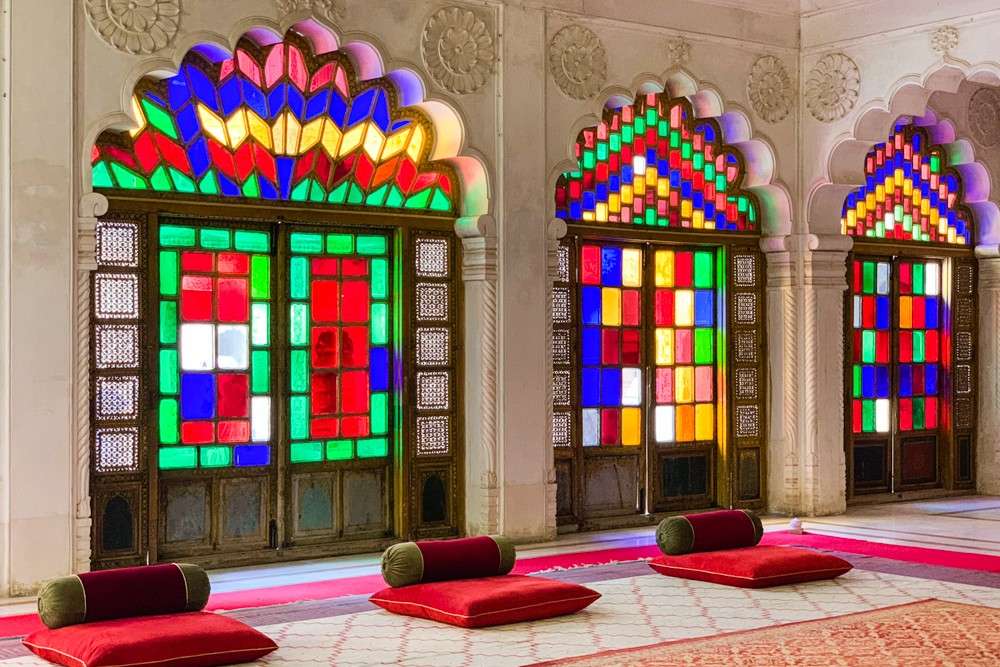 Udaipur in Rajasthan’s lovely lake district was founded in 1553 as the capital of Mewar, the only historic dynasty that claims never to have been conquered by the Mughals. Rajasthanis continue to describe Mewar independence with great pride.

When Maharana Udai Singh II established his 16th-century stronghold, he only had enough money for three rooms and a courtyard. But it was enough to jumpstart 400 years of additions and renovations. Ultimately, 22 generations of rulers built India’s second largest royal complex, with 11 palaces within its gates.

In Udaipur we saw the softer side of royal life. A beautiful shaded garden with several pools was used to celebrate Holi, the festival of colors. The royals of the day waded in the pools and tossed colored water on each other. Splish-splash. Red. Green. Blue. The women, as usual, had separate pools for themselves. 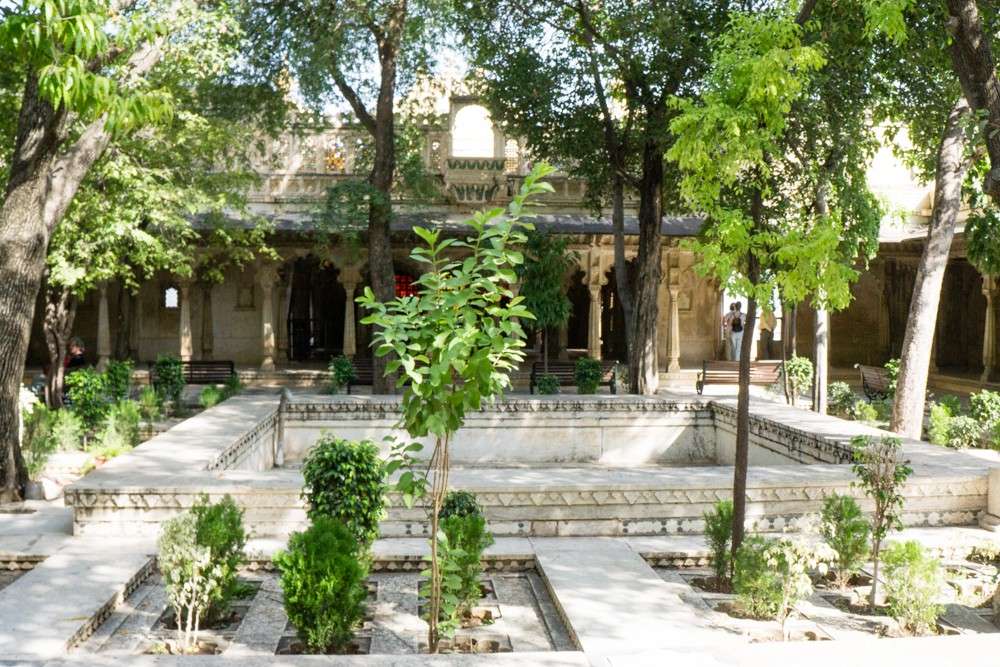 Scalloped windows framed views of the lake and the city. Fantastic mosaics and mirrored rooms must have been the royal rage, as we saw them everywhere. Sometimes it was hard to reconcile the opulence of the palaces within these historic forts with life on the streets outside. But I always relished the artistry and workmanship we saw. It’s part of the enigma that is India. 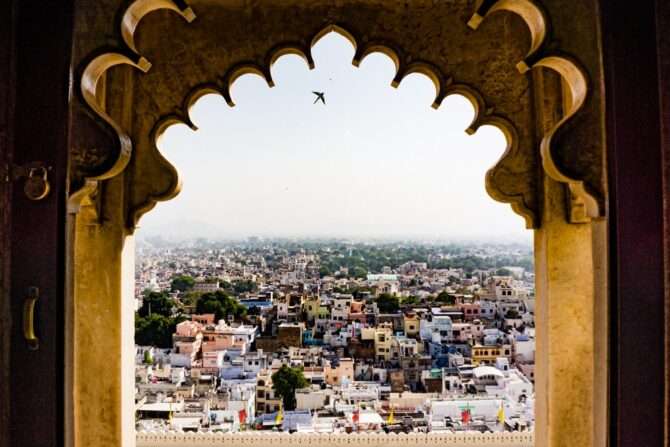 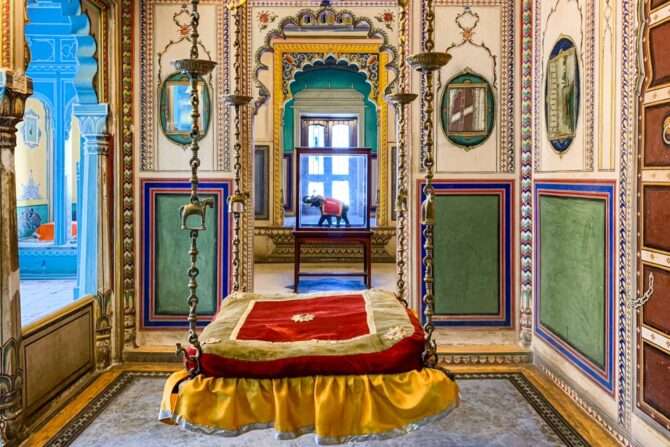 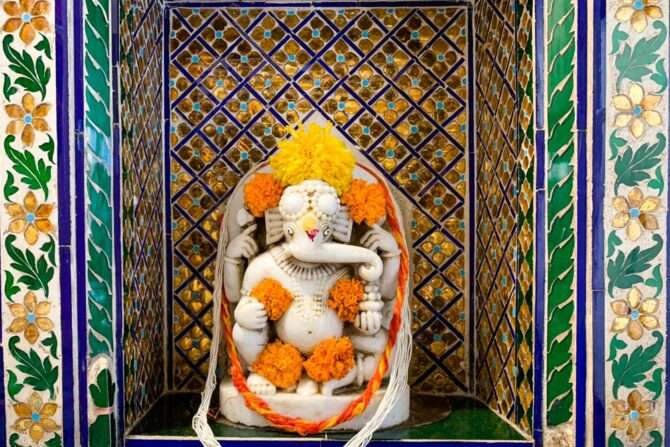 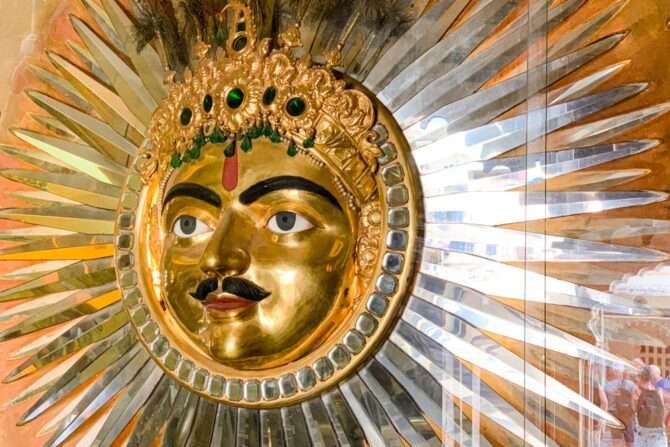 From royal abodes to historic hospitality

What happened to all those forts and palaces after Independence in 1947? Well, if you still owned your palace, you turned it into a heritage hotel. Even in the old days, when visitors came on elephant or horseback, Rajasthani hospitality has always been legendary.

In the backwater farming town of Jojowar between our visits to Jodhpur and Udaipur, we stayed at Rawla Jojawar, the former home of a decorated royal warrior and now a boutique inn. Rao Maharaj Singh, who became an innkeeper in 2003, told me that the title “rao” was given to his great-great-great-grandpa for his bravery in one of the wars between Jodhpur and Jaipur. Rao Singh talked about his family generations back as if their history took place yesterday. “My seventh-generation grandpa, he built this house,” he said. His ability to recount stories eight generations back amazed me. 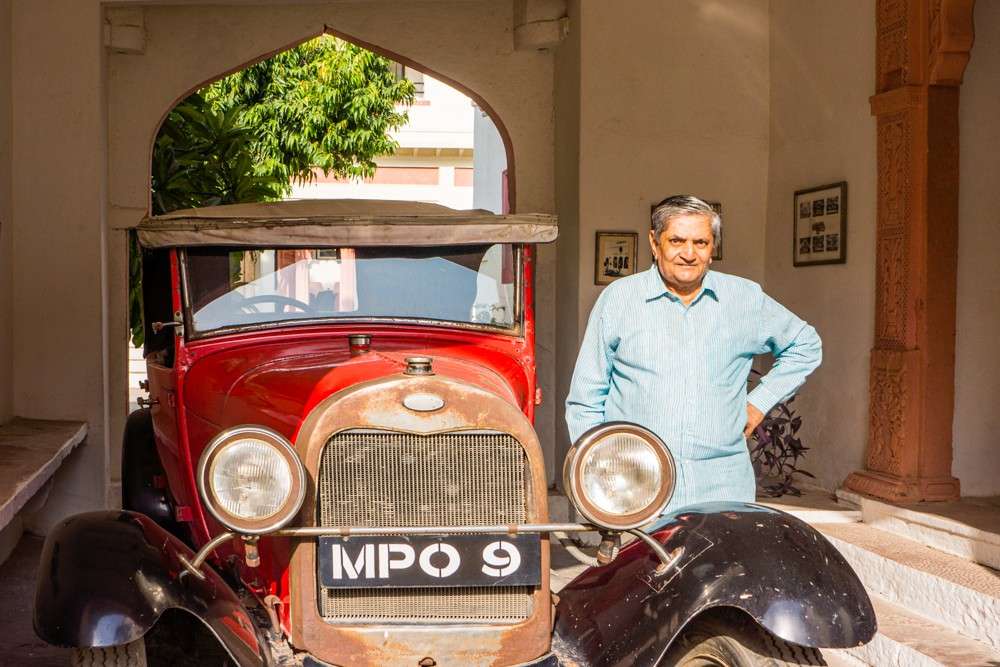 Out in the deep countryside on a hill above another farming village, we stayed at the repurposed 17th-century Ramathra Fort. Before lunch one afternoon I found owner Gitanjaki Rajpal sitting in the shade in front of a golden stone turret. She explained that the property has been in her husband’s family for eleven generations. The couple moved back about ten years ago to renovate the estate into a gracious rustic inn. It couldn’t have been more comfortable or restful. 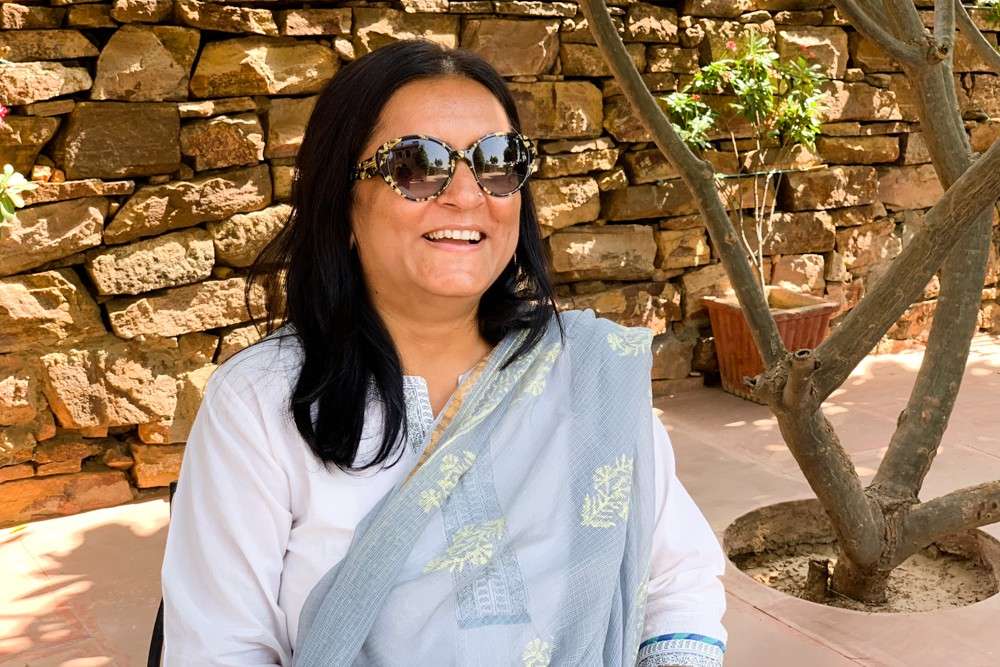 Ramathra represented the perfect paradox of Rajasthani hospitality: a once-functioning fort originally designed to repel invaders now embraces strangers, introducing us to the essence of India.

“Hospitality is a part of the culture in India. It’s part of the stories we’ve been brought up with. We don’t need to learn it in hospitality schools,” she told me. “A guest is like a god in your house. That’s how we’re supposed to look after you.” And that’s how we felt almost everywhere we went.

Our Rajasthani adventure nearly complete, David and I treated ourselves to a grand date-night dinner at Rambagh Palace in Jaipur. Built during the last days of the British Raj and the Rajput kingdoms by Maharaja Jai Singh and his wife, Gayatri Devi, the confection of a palace is now a five-star hotel. 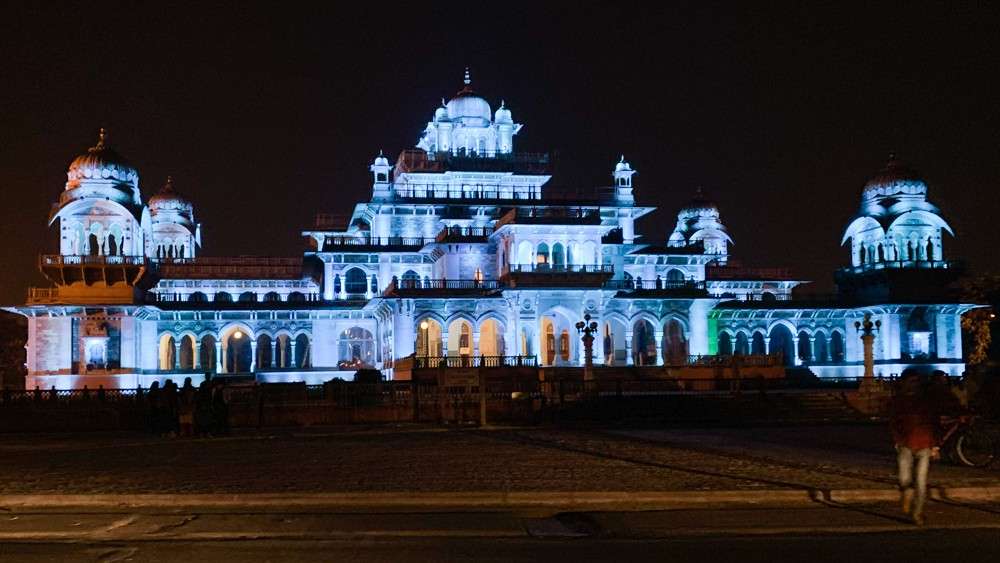 Just as we settled into the dining room with its frescoed ceilings, crystal chandeliers and fine bone china, I started to cough. It had been coming on for days, but I kept ignoring it. 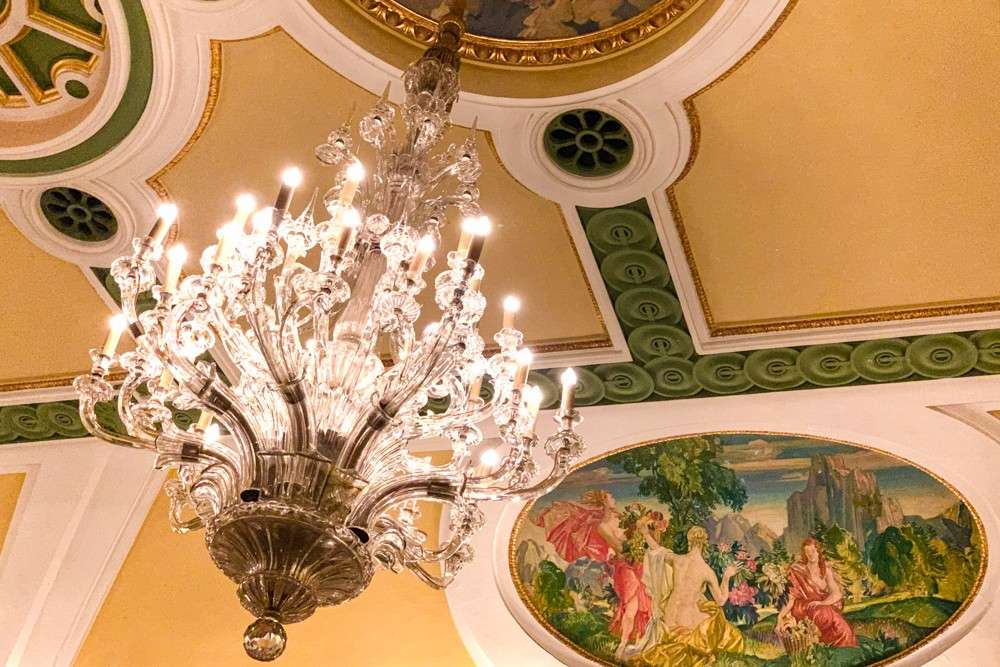 “Madame,” the waiter addressed me. “Can I get you some mother’s tea?” Mother’s tea? I was curious. “It will cure your cough before you get on the airplane to go home,” he assured me. It was not the first time a caring Indian waiter had offered to cure me with his mother’s recipe for food or drink.

A few minutes later he emerged with a fragrant herbal infusion in a cozy pottery teapot. It was hard not to laugh at the contrast between the grand room and the homey presentation. The earnest belief that a proper cup of tea could cure all made me smile. 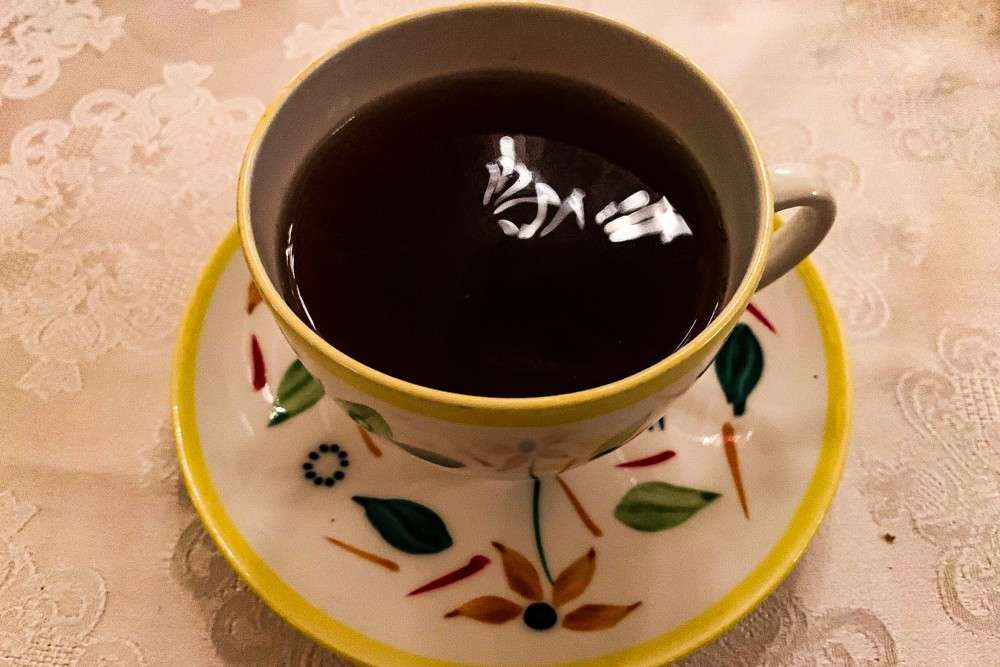 Finally the puzzle of Rajasthan—India’s multi-layered history, the warmth and welcome of its people and the depth of its hospitality—came together in a simple cup of tea.