An Odyssey to the Heart of World War II Singapore

“… we were … bombed out of our beds at 4 am on 8th December 1941 without warning; no sirens sounded till the enemy was well away.” ~ Medical Practitioner J.B. van Cuylenburg, 8 December 1941

Who writes history? Who is empowered to tell our nations’ stories to future generations? Those questions have intrigued me since I visited the U.S.S. Arizona Memorial in Honolulu many years ago and floated a lei out to sea in memory of the fallen sailors. 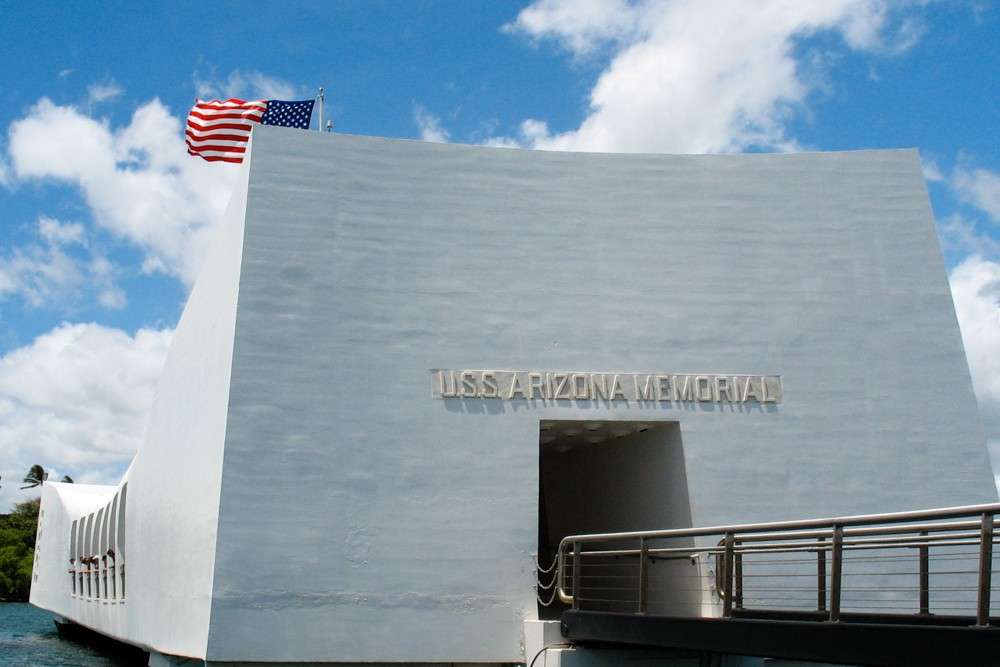 But Pearl Harbor wasn’t the only place that Japanese forces bombed on that fateful day. In a surprise attack, Japanese fighter planes shelled Singapore on December 8, 1941. Across the International Dateline, it was December 7 in Hawaii. But that’s not all. They also attacked the U.S. air and naval forces in the Philippines and landed troops on the Malay Peninsula, their land route for invading Singapore.

Japan’s aim was to knock out all the Allied bases in the Pacific so they could control shipping routes and absorb Europe’s Asian colonies into their empire. The Japanese success in Singapore was swift. Preoccupied by the blitz at home and fighting Hitler in Europe, the British surrendered on February 15, 1942. Without the British or anyone else to protect them, the people of Singapore endured three-and-a-half years of grueling occupation.

How did I learn all this? Because Singapore has made a point of turning its former forts, prisons, POW camps and the Kranji War Cemetery for Allied troops into vehicles for remembrance and education.

On my visit to Singapore in February, 2005, I could have been shopping along Orchard Road or sipping a Singapore Sling at the Raffles Hotel. Instead, I was in a tour van rumbling past the vast shipyards and container ports that ring Singapore’s southern coast en route to Labrador Park to learn about the war in the Pacific. 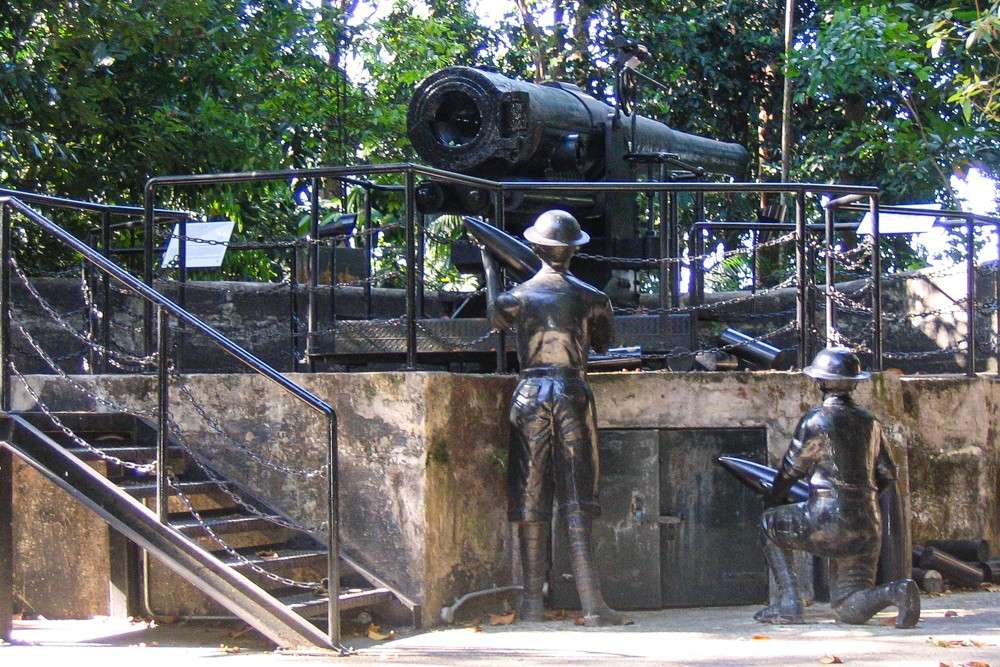 It was a sultry tropical day, thick and still. The main World War II attraction was the Secret Tunnels exhibit in the remains of the old British Fort Pasir Panjang. Rediscovered in 2001, the original bunkers were built in 1886 with brick walls four feet thick. The underground rooms were used at various times as oil and munitions storage, as engine rooms with generators to power the fort above, and as living quarters for the gunners.  Comfortably air-conditioned when I visited, they must have been unbearably hot, stuffy and dark for the soldiers who worked inside. 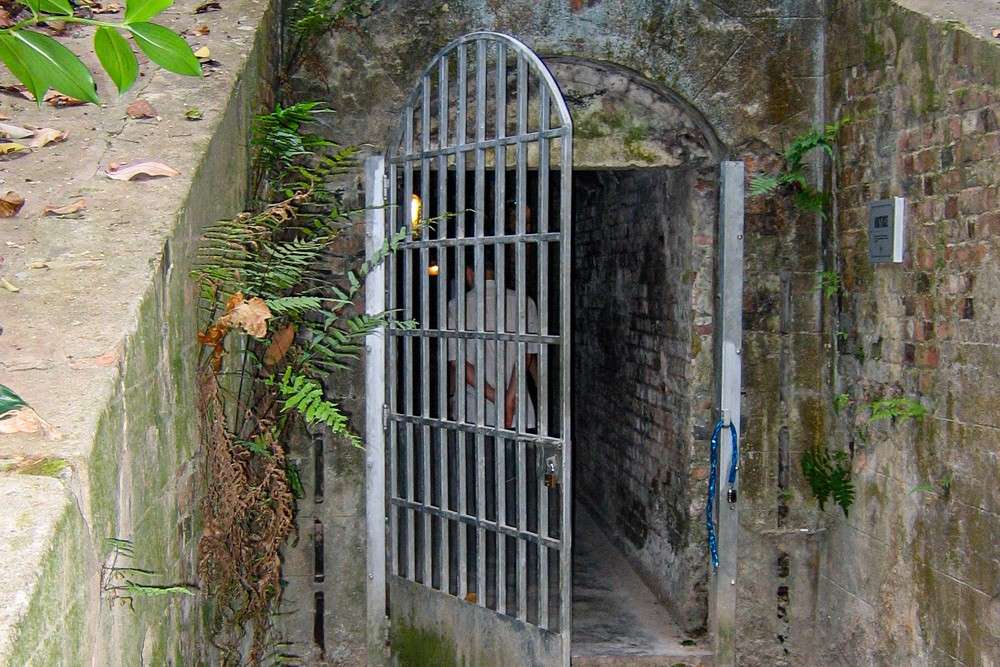 Designed to transport visitors back to 1941 and 1942, the World War II exhibits included a short film describing the Japanese blitz offensive and newspapers headlining the spin of the day. A front-page ad in the Straits Times invited the city’s chic set, apparently clueless about Singapore’s impending danger, to a dance at the Raffles Hotel. In the next room, a long, tall arched corridor, we were shaken by a sound montage of air raid sirens, snippets of panicky conversation and the crash of falling bombs.

We passed replicas of barrels filled with documents that the British were burning to keep from enemy hands. Finally, we turned a corner to see shored-up sections of actual rubble, untouched for years. 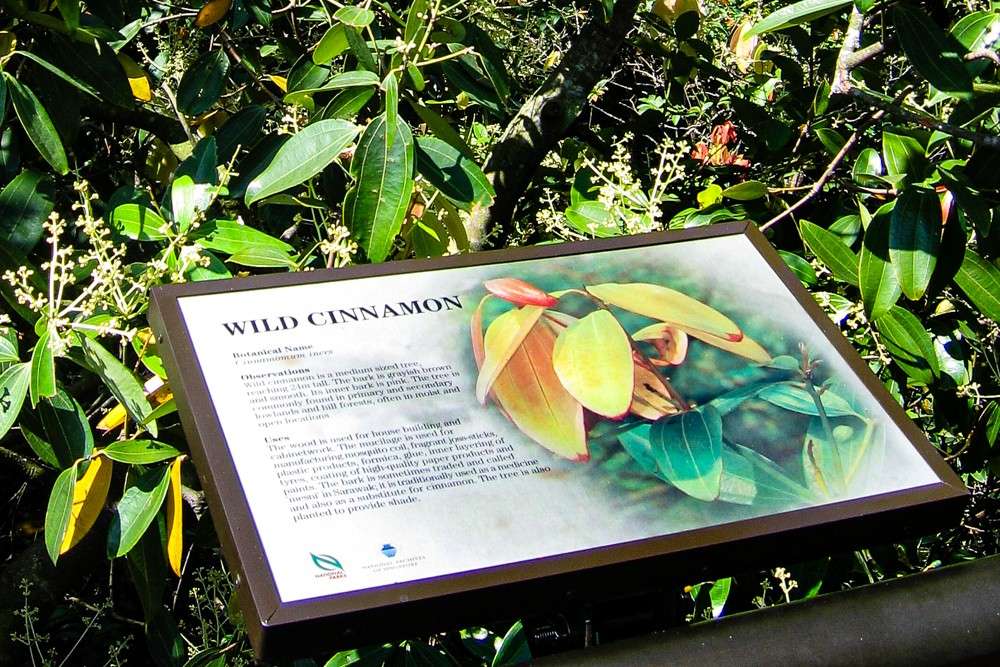 We emerged from the bunkers to a Labrador Park so verdant and tranquil that I almost forgot I was there to experience World War II. Today the 42-acre park offers nature and fitness trails, picnic spots with spectacular views, a two-hour self-guided history walk, and a recently recovered six-inch gun used to defend Singapore during the war. But sadly, in In the years since my visit, the tunnel tours have been discontinued. The park above, however, is well worth a visit to get a feel for the jungle that once covered most of Singapore and the Malay Peninsula.

Continuing on our tour of World War II sites, a 10-minute drive inland brought our minivan to Kent Ridge Park, the scene of one of the fiercest and most tragic battles in Singapore’s history. For 48 hours on February 13 and 14, 1942, 180 men defended Bukit Chandu (Opium Hill) against the onslaught of Japanese troops. Like a latter day Alamo, virtually all the defenders died, paving the way for the British surrender to the Japanese on February 15. 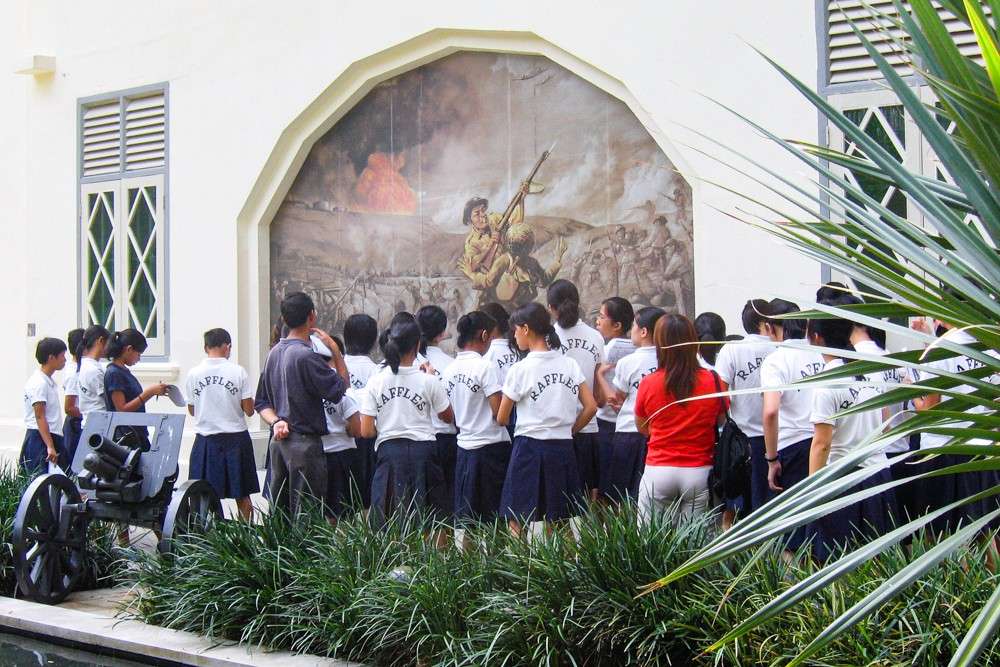 I tried to visualize this bit of urban open space filled with soldiers fighting for their lives, but the scene was hard to imagine until we got to the museum, Reflections at Bukit Chandu, the last surviving colonial bungalow on the hill, now transformed into a moving and informative World War II interpretative center.

A trip back in time to Fort Siloso, Sentosa Island

Sentosa, a small, hilly island just south of Singapore, has been transformed from a military outpost into a destination playground with parks, hotels and attractions. It also hosts an evocative exhibit in the old Fort Siloso area tracing Singapore’s military history from the 1800s through Britain’s greatest military defeat in Asia. 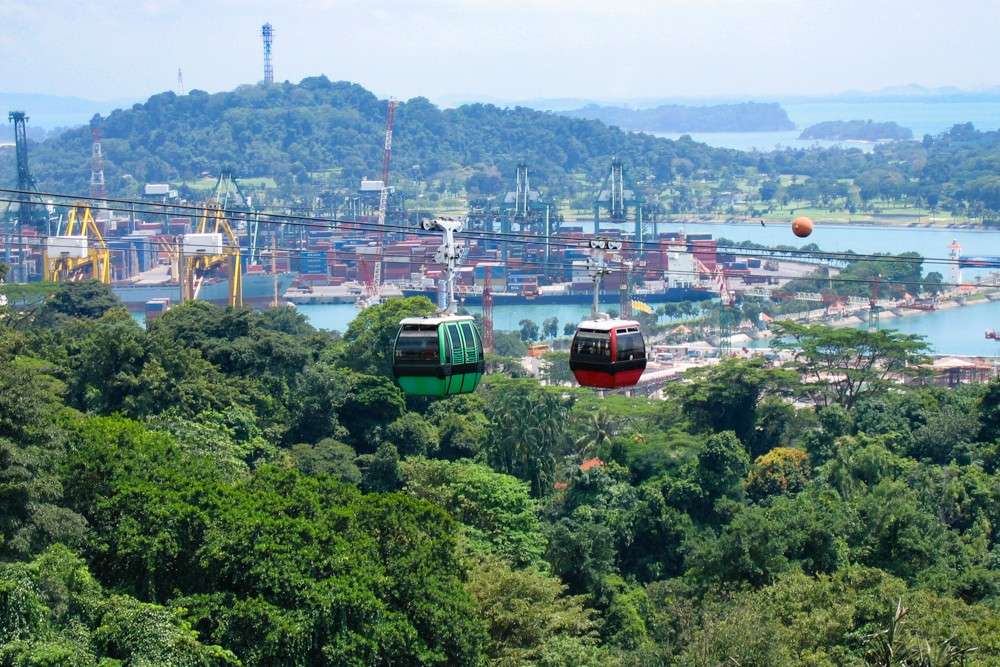 I visited Sentosa on a glorious sunny day, arriving via cable car from Singapore’s Mount Faber. The scent of the sea and the warm fragrance of the tropical foliage carried me back in time as I meandered up and down Sentosa’s gentle hills. In the old batteries and tunnels, soundscapes of crying babies, army officers second-guessing their commanders, mothers worrying about their children, evoked the chaos of the scant ten weeks it took the Japanese to march the length of the Malay Peninsula to conquer Singapore. 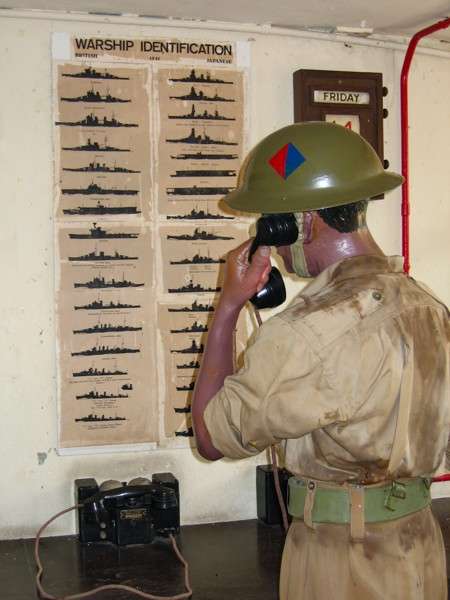 Sirens shrieked in dark hallways and guns boomed as I learned about the devastation visited on Singapore’s civilian population by the Japanese, including the “Sook Ching” purge of an estimated 50,000 “undesirable” Chinese. The Fort Siloso World War II exhibit culminated in two “surrender chambers,” life-size recreations of the historic moments in 1942 and 1945 when the British and Japanese generals met to ceremonially sign the documents that marked the official beginning and end of Japan’s three-and-a-half-year occupation of Singapore.

The name “Changi” carries many associations. For modern travelers it is simply the name of Singapore’s international airport. Unknown to most travelers, however, it is also the name of one of the world’s most notorious POW prisons. Like Baghdad’s Abu Ghraib, the Hanoi Hilton or the Soviet Gulag, the name Changi conjured up images of privation and torment. 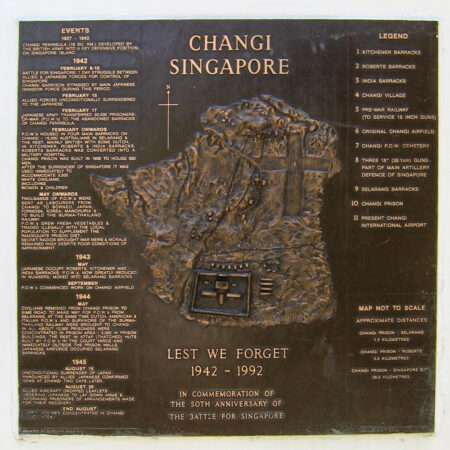 The Japanese, who transformed Singapore into Syonan-to (Light of the South) in 1942, took over the existing Changi prison and the surrounding British army camps on Singapore’s north-eastern peninsula to imprison POWs from Britain, Australia, New Zealand, India, the Netherlands, Indonesia, Malaya and the U.S.

They also mercilessly plucked Chinese civilians from their homes, relocating them to Changi and other labor camps around Singapore for the crime of supporting China against the Japanese invasion in the 1930s. It was also notorious because thousands of POWs and civilian internees were transferred from Changi to work on the infamous Thai-Burma or “Death” Railway, immortalized on film in “The Bridge on the River Kwai.” 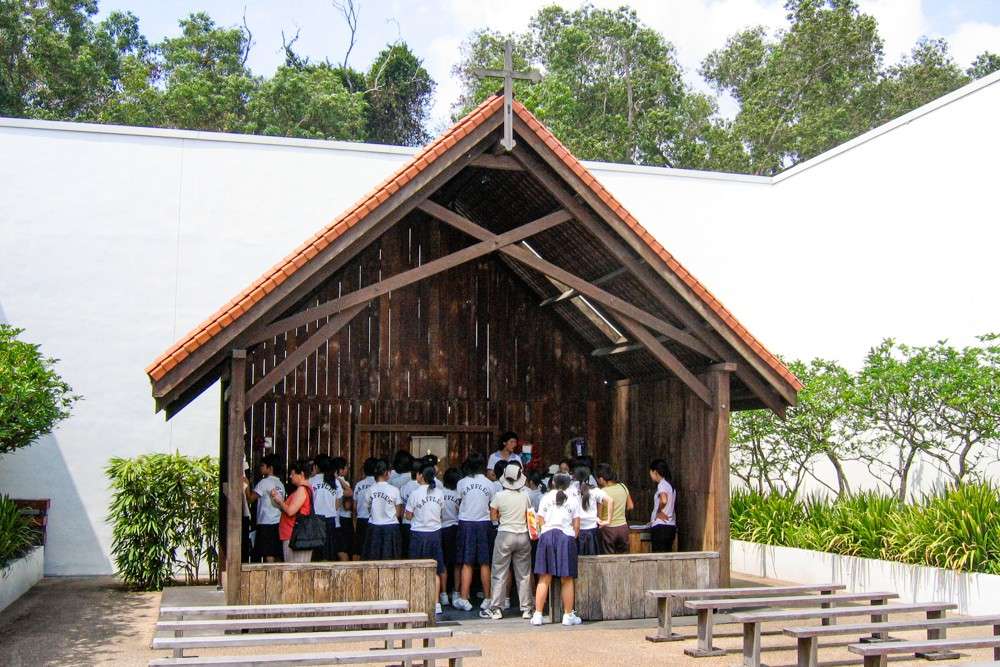 The Changi Chapel and Museum tell the difficult stories of the Japanese occupation of Singapore with spare simplicity and deep compassion.

“I went to Changi on 29 December 1942 with one of my mates and we came back blind…” says an Australian POW who lost his sight from malnutrition caused by a steady diet of fermented rice.

A child internee laments the loss of her familiar life:  “…We were 12, 11, 9 and 7 years old.  It was very bewildering – one minute we had a warm home and food to eat, the next minute we were among strangers in a long wooden hut with ‘balek-balek’ (low beds), no showers and bucket system toilets.”

Despite the hardships, or maybe because of them, Changi speaks as much to human dignity, resilience and resourcefulness as to people’s suffering. The heart of the museum, both physically and metaphorically, is the replica open-air wooden chapel, recreating the many hand-hewn chapels that British and Australian POWs built throughout the area. 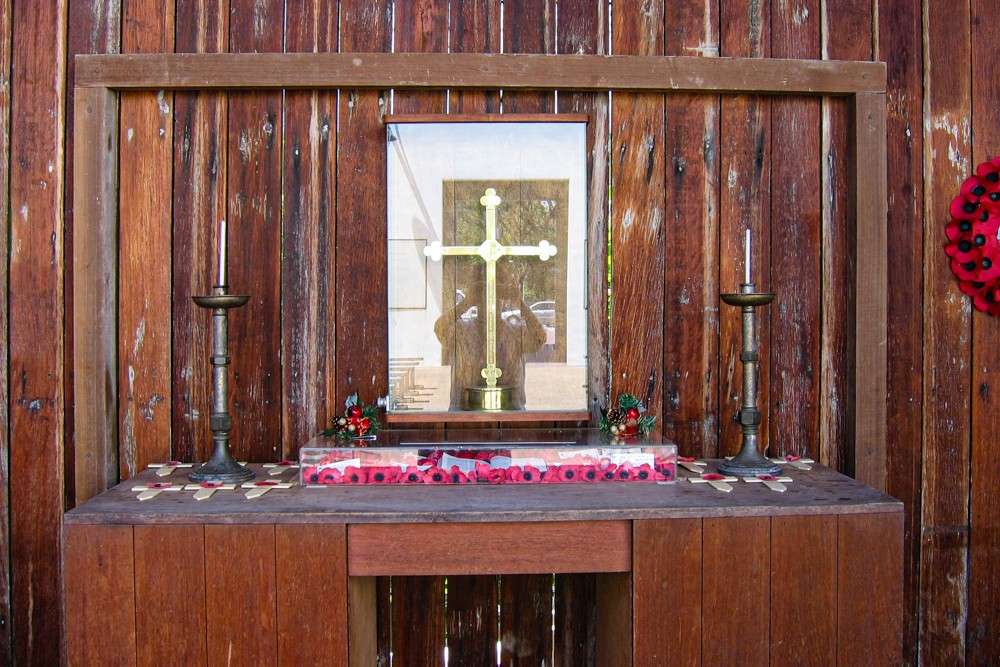 A brass cross fashioned from an artillery shell by Sgt. Harold Stogden stands on the altar.  Sgt. Stogden never made it home to England.

One of the most touching sights was a bulletin board pinned with hundreds of messages. The notes were written by the children and grandchildren of former POWs, other war veterans and Singaporean schoolchildren learning about the sacrifices made by the POWs incarcerated at Changi during the war. 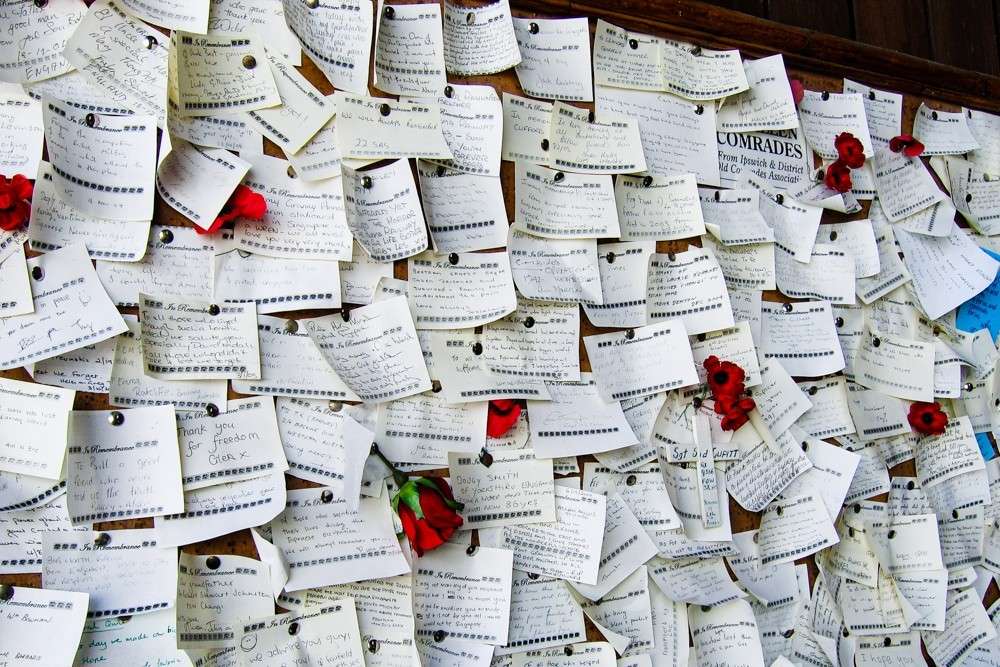 Many of Changi’s approximately 90,000 annual visitors, especially the families of former British and Australian POWs, come to see the museum’s reproductions of Stanley Warren’s murals. Warren, a British bombardier, miraculously survived dysentery and a kidney-stone operation without benefit of anesthesia or antibiotics. He credited the sound of hymns he heard coming from the spare chapel below his makeshift hospital ward for the strength he needed to survive. After his recovery, Warren used what he could find – brushes made of human hair and paint mixed from plant dyes and billiard chalk – to decorate the chapel with his heartfelt biblical murals. Unfortunately, photos are not allowed in the museum, but you can find out more about the murals here.

Warren’s murals share the wall with Two Malarias with a Cholera, a blown-up version of a charcoal sketch drawn on a paper scrap by Australian artist Ray Parkin during the forced “speedo” period along the Death Railway. The Japanese, racing to build 600 jungle bridges and finish the tracks across Thailand and Burma, insisted that everyone, including the ill and infirm, work virtually nonstop. Incensed, Parkin complained. The Japanese eventually relented, allowing the most infirm to go back, but sparing no able-bodied prisoners to help them. Barely able to stand, the sick helped each other, making wobbly tripods for support. Parkin’s sketch of two soldiers with malaria holding up an even sicker companion with cholera has been selected as the museum’s logo.

The Kranji War Cemetery on a beautiful hillside is the official resting place for 4,500 Allied soldiers who served in Southeast Asia. My most enduring image of the cemetery is of a group of schoolgirls clutching bouquets to place on the graves of strangers. 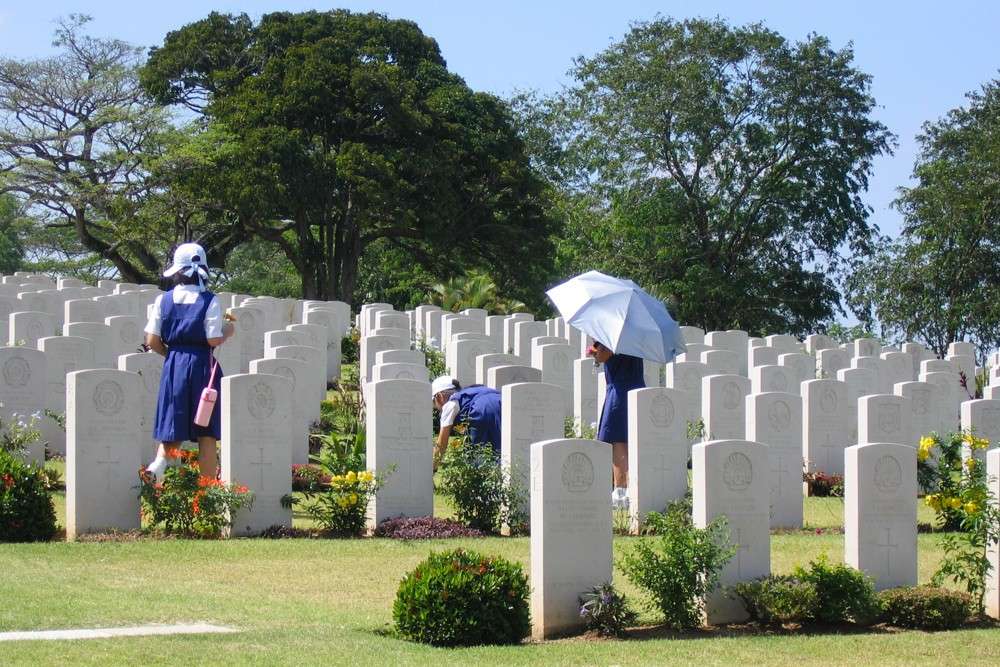 With reflective umbrellas to ward off the equatorial sun in one hand and flowers in the other, the girls wandered through the rows of white domed markers seeking someone to receive their flowers. Their assignment was to write an essay about who they imagined that soldier to be. Singapore has used its painful World War II history to weave a compelling tale of courage and resilience. Watching the students, I wondered what lessons they gleaned from their visits. 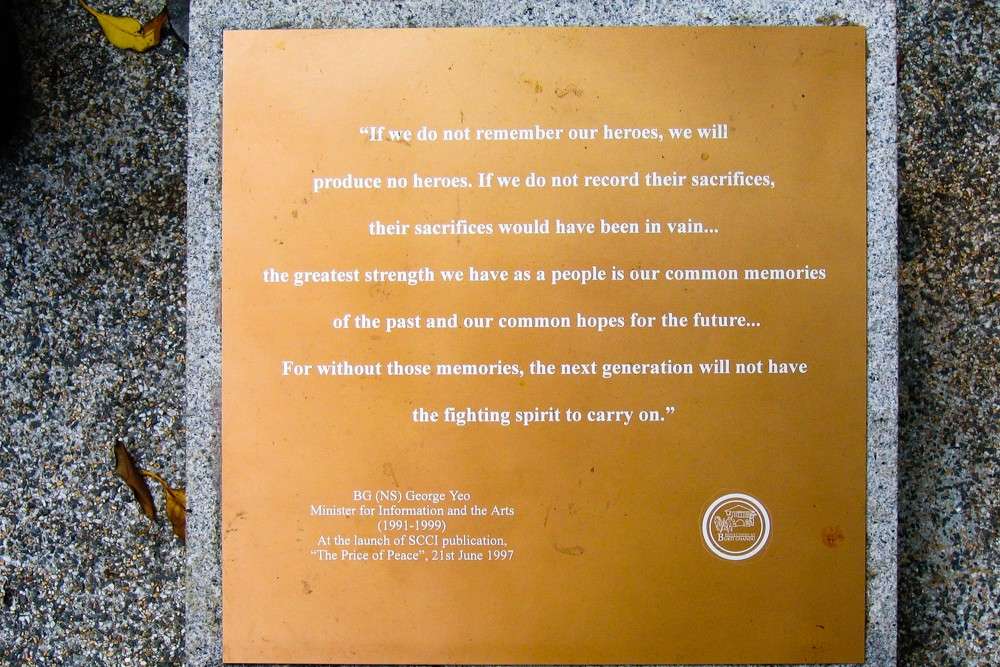 What I learned was that Britain couldn’t protect Singapore. Security could only come with independence, which happened in 1959. As I toured Singapore’s World War II battlefields and memorials, it wasn’t the grand sweep of history that made its World War II story so gripping, but the thousands of individual accounts that made it real.

After I left Changi, I had lots to think about when I repaired to the Raffles Hotel for my Singapore Sling. 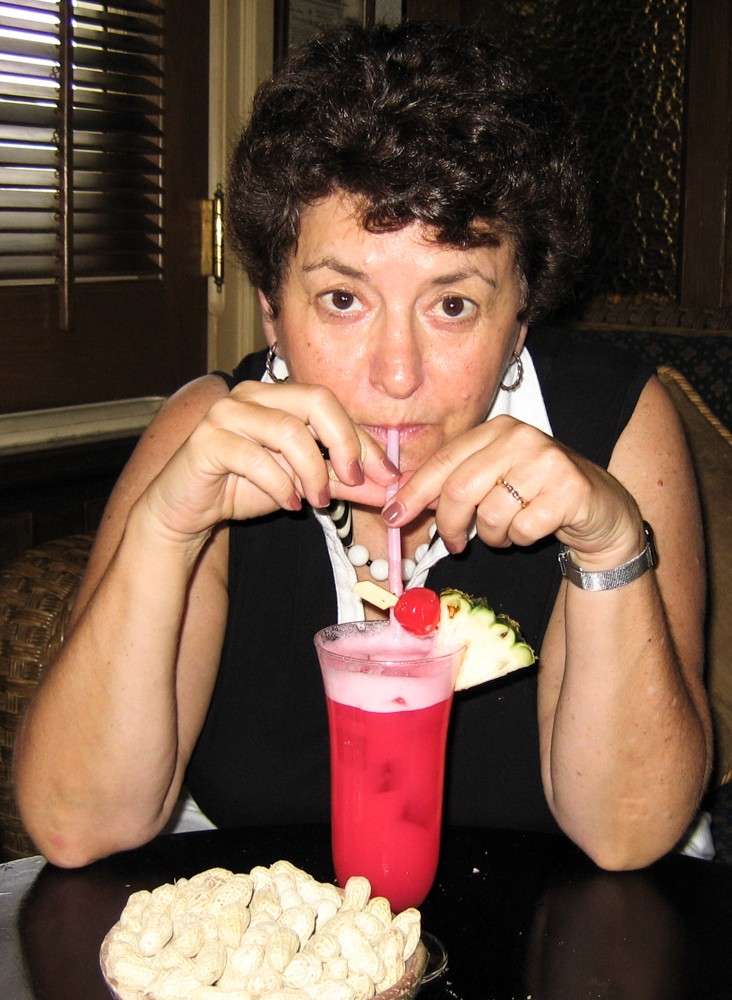