It all reminded me of September 2004, my initiation into cancelled New Year’s plans. That year it was our Rosh Hashanah (Jewish New Year) plans that were dashed. But during the following six months, from September 2004 to March 2005, we were blessed with a bounty of New Year celebrations from four different cultures that turned out to be a crash course in living anthropology.

It was fall 2004, time for turning leaves and turning inward. Instead, David and I chased the sun across the Pacific from San Francisco to Southeast Asia for a six-month USAID assignment in Jakarta, the capital of Indonesia, the world’s most populous Muslim nation.

With the Jewish Holidays just a week away, and the only synagogue in all of Indonesia a tiny remnant Misrahi (old Iraqi) congregation 500 miles away in Surabaya, it was clear we needed a plan. A call to our San Francisco rabbi put us in touch with a New York rabbi who traveled to Singapore each year to conduct High Holiday services for a small but energetic Reform congregation. Looking forward to jet-setting to Singapore to spend two holiday weekends with an American-style Jewish community, we exchanged information—critical for security—and bought our tickets.

But celebrating the Holidays in Singapore was not to be. The Indonesian government could not/would not—it was never clear—issue our multiple-entry visas in time for Rosh Hashanah or even Yom Kippur. As newcomers to U.S. government life abroad and to Muslim Indonesia, we hesitated to explain exactly why we needed to expedite our visas. It wouldn’t have mattered. Multiple-entry visas take three weeks, no matter what. Even with help from the American Embassy, we learned that Mick Jagger was right: You can’t always get what you want.

It was time for Plan B.

Plan B started with Nicole, a Jakarta-based friend of a Bay Area friend. Nicole was my lifeline and guide to living the expat life in Jakarta. Until Nicole trilled “allo?” into the phone after we arrived, I had no idea that she was French. I was even more surprised to learn that she was also Jewish. 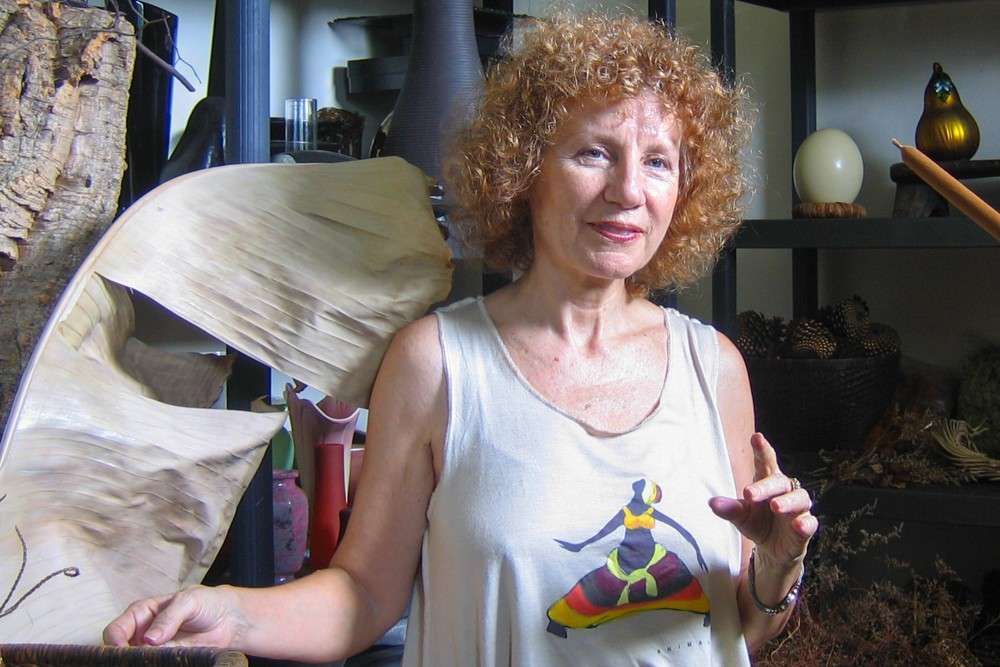 Hearing about our dilemma, Nicole (above) introduced us to Marilyn, who was hosting Rosh Hashanah dinner for a group of Jewish expats in Jakarta.

Marilyn’s table was full of familiar-looking faces, people from Boston, New York, Colorado, Paris and Cairo, all living and working in Jakarta. Marilyn’s Indonesian house staff, clueless about the origins of her recipes and the sources of our pre-dinner blessings, put together a succulent meal that began with apples and honey, moved on to chopped liver, challah, matzo balls, and brisket, and finished with honey cake and the best rugelach we ever tasted.  Our own bubbies couldn’t have made a more traditional or delicious meal. With good food and fellowship that stretched around the world, we were the welcomed strangers, the grateful recipients of hospitality from our Jakarta-based band of modern wandering Jews.

Like many expats, indeed, like many Indonesians, we escaped Jakarta for the wonderland of Hindu Bali to usher in 2005. The streets looked festive with sparkly noisemakers and horns for sale everywhere. 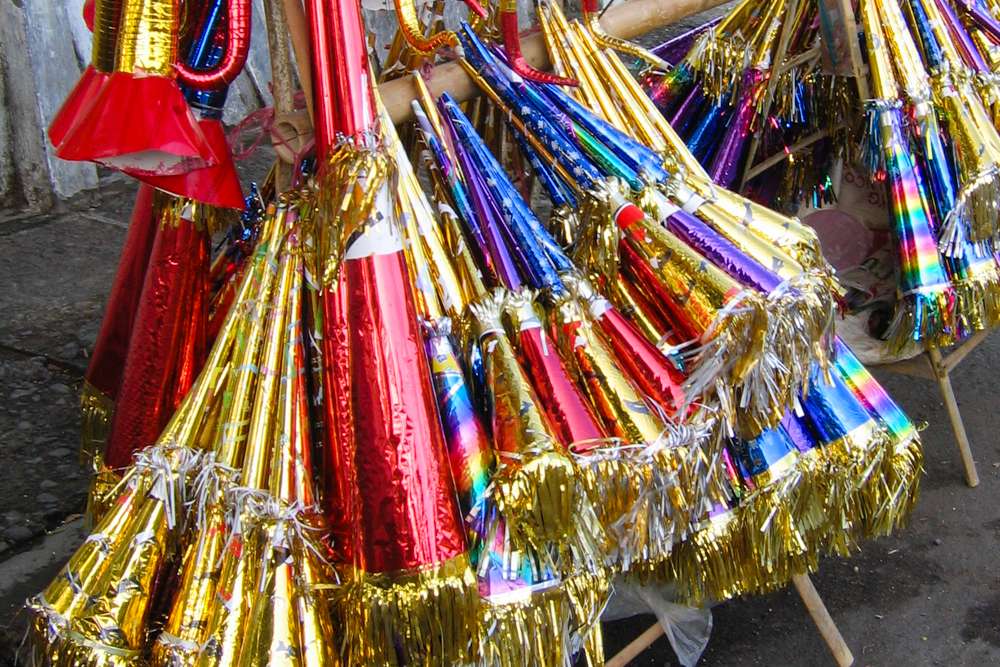 If the Jewish holidays in September were memorable because our new friends made us feel welcome, New Year 2005 in Bali was memorable for the anxious quiet that dampened all of Southeast Asia that winter after the Indian Ocean tsunami claimed so many lives on December 26, 2004. That morning, completely unaware of the tragedy unfolding two islands away, we were out early, wandering the beach to see Balinese families dunking in the ocean as part of their observance honoring Saraswati, the Hindu goddess of knowledge. 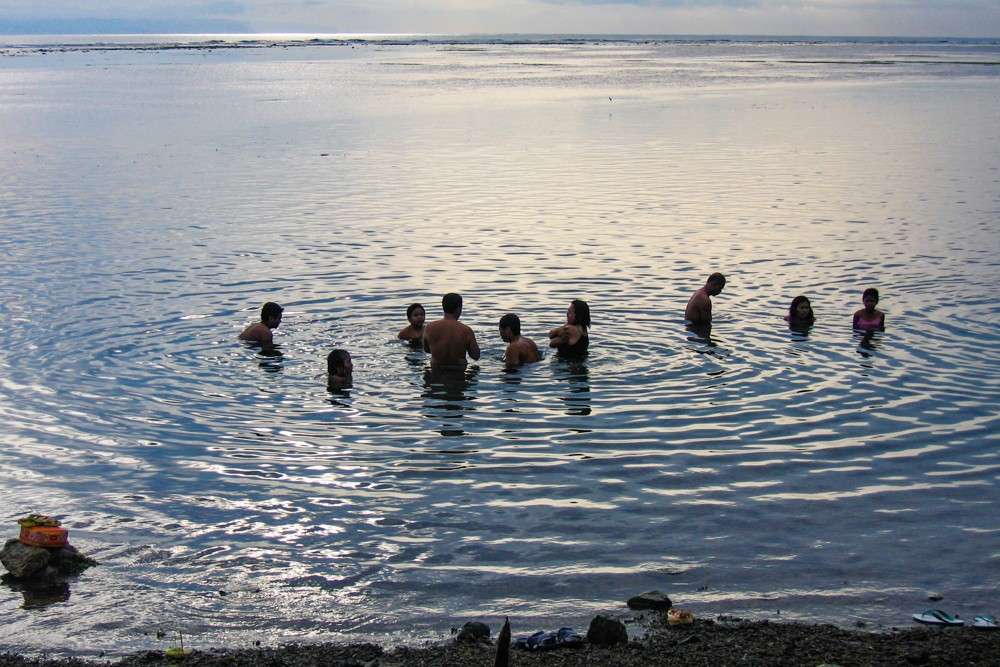 Walking back to the hotel, we passed a cafe with its TV on, and kept hearing people talking about an earthquake. We didn’t yet know what was going on. It all became apparent soon enough. 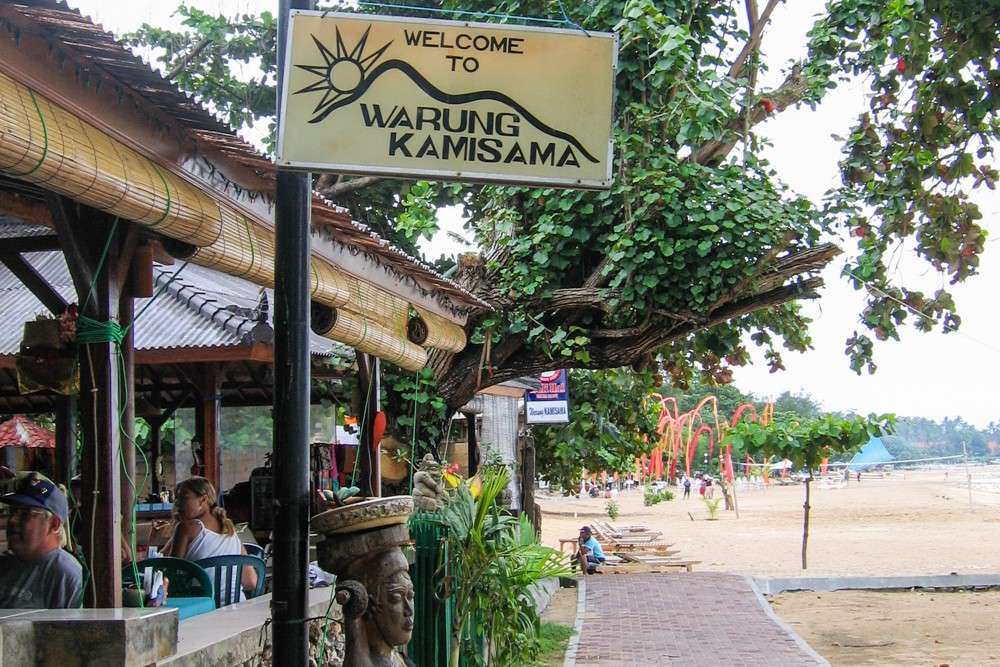 Watching the reactions of the Balinese was enlightening. The older generation couldn’t help but mumble about karma and payback, directing their righteous anger from the 2002 terrorist bombing of two local nightclubs toward the fate of the Muslim population in Aceh on Sumatra, the epicenter of the earthquake. Balinese teens, on the other hand, fanned out along the roads, pitching in to raise money for tsunami and earthquake relief. Meanwhile, in Sumatra the Acehnese cried out to Allah, “Why us?”  Each culture—and each generation—needs to find meaning in otherwise unspeakable disaster.

But the New Year still needed to be marked.

With our son and his girlfriend visiting from Philadelphia, we enjoyed a festive Balinese dinner… 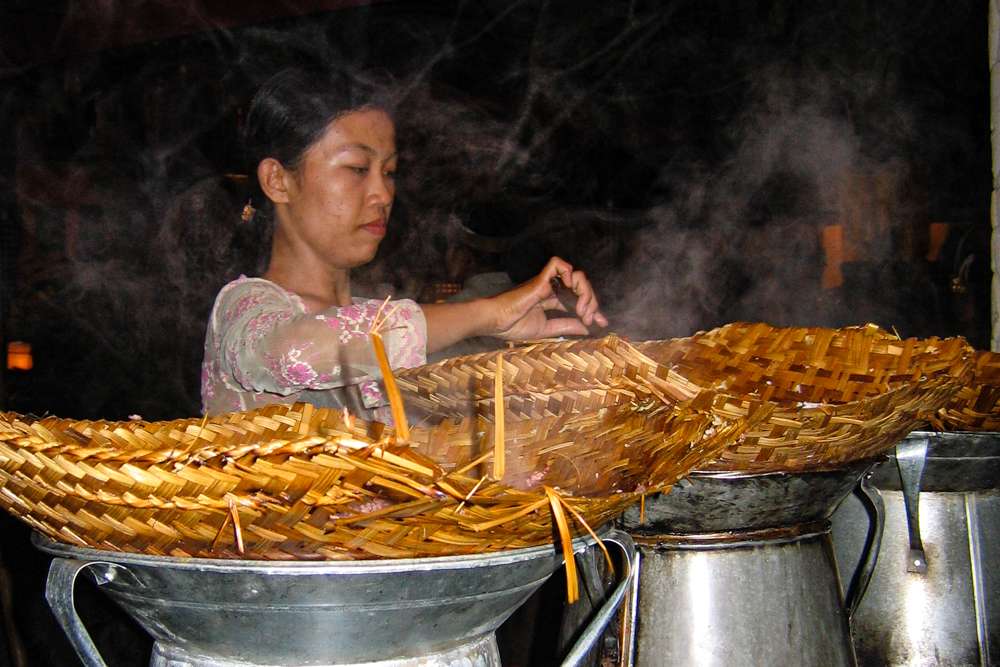 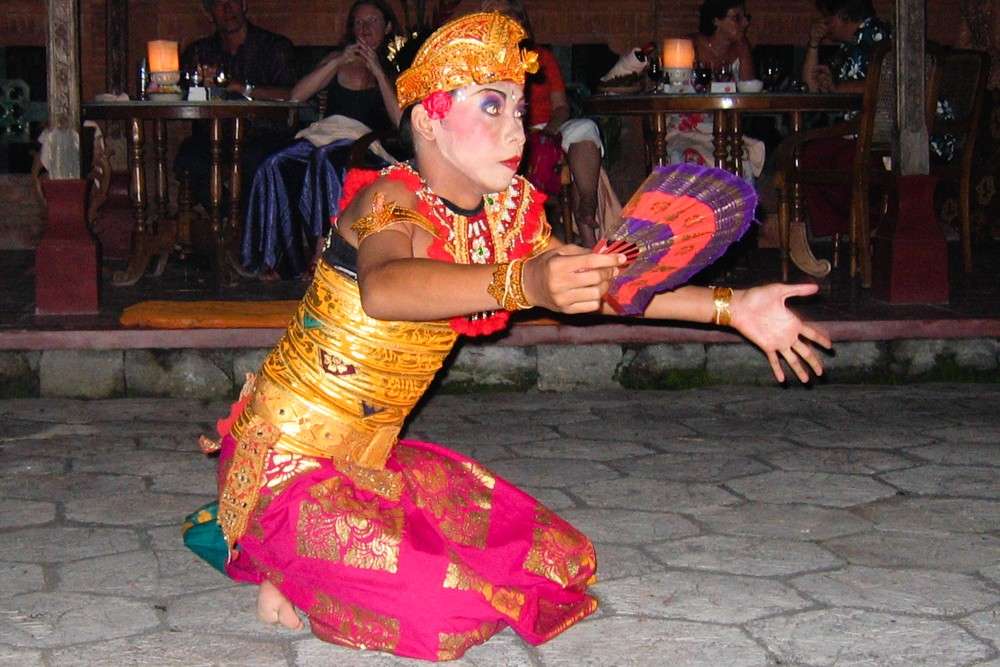 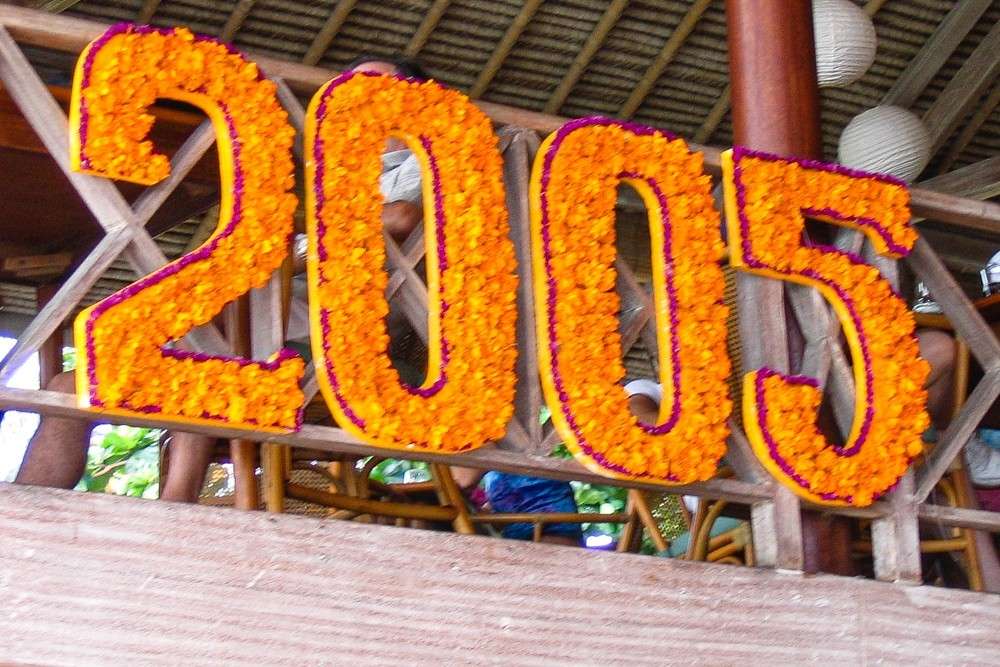 The most exotic of the four New Year’s celebrations I encountered in Southeast Asia was Nyepi, the Balinese New Year. From my western Jewish perspective, the holiday looked like a cross between Yom Kippur and Halloween. I was in Bali on my own at a photography workshop hosted by a Balinese photographer and his German wife, who graciously inquired if I ate pork, a staple in Hindu Bali. Never kosher in my home or growing up, I was flattered by her consideration, but decided that this was not the time to make food preferences a mark of my identity. I was there to learn to take better photos and to experience an unfamiliar culture with guides who were delighted to show off their traditions and customs. 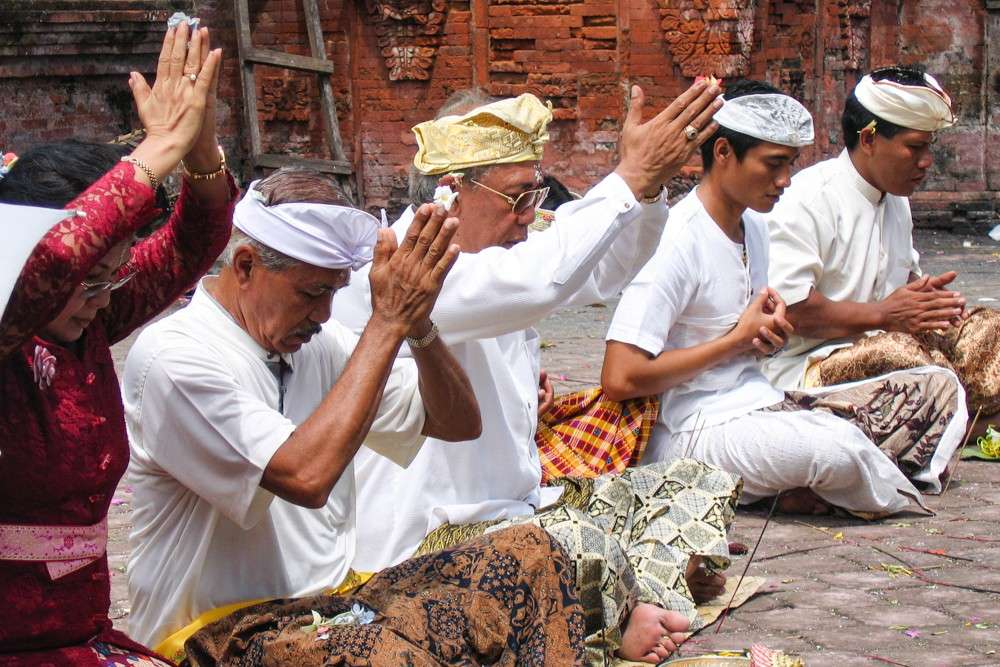 The build-up to Nyepi lasts about a week, with family gatherings, village temple ceremonies and feasting on a stunning array of specially prepared dishes. Teams of young men build huge ogoh-ogoh, colorful ogre effigies to be destroyed Burning-Man-style in bonfires on the beach—all designed to scare the evil spirits away from Bali. 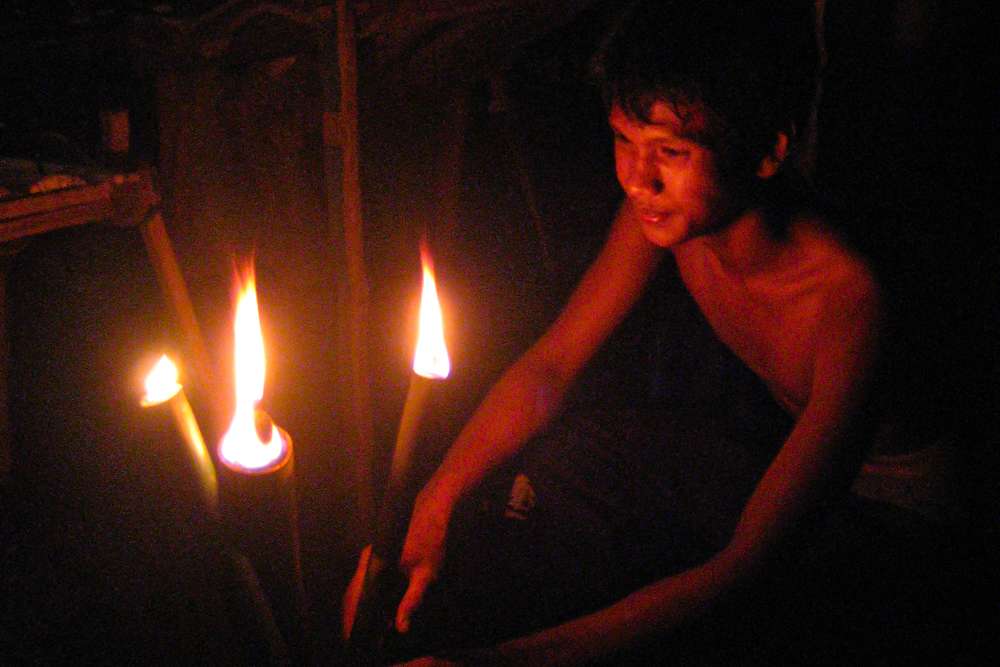 Although Nyepi is known as the Balinese day of silence, the night before, Erev Nyepi, if you will, pulsed with sound.  Every major intersection boasted small fires and troops of drummers and gamelan players pounding out rhythms to chase away the malign spirits. 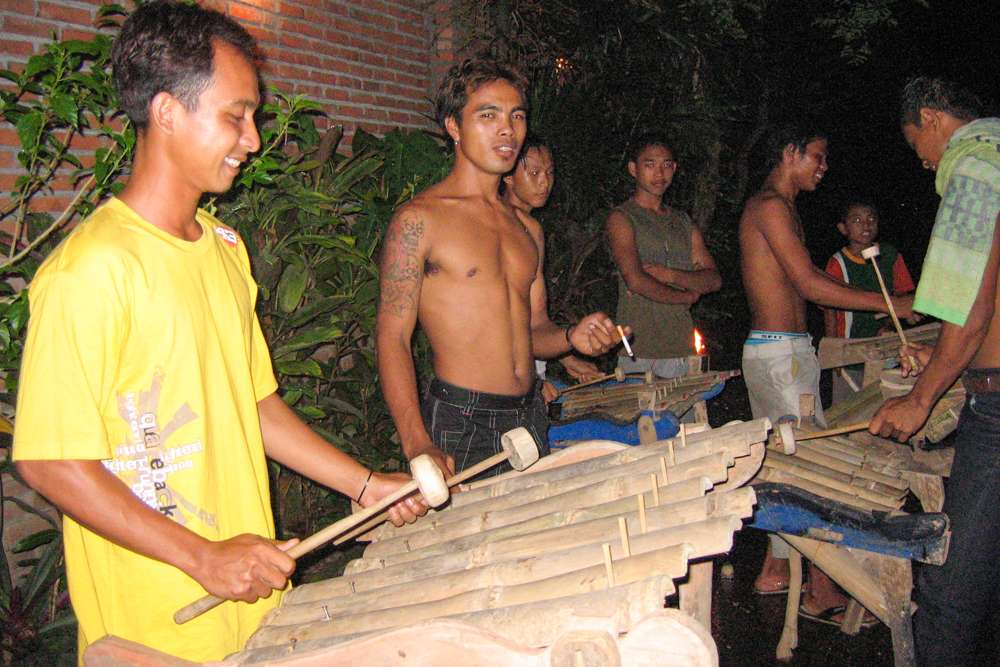 As dawn approached, the noise finally tapered off and everyone hustled home to beat the island-wide 6 a.m. curfew. During Nyepi, the streets are empty. Silence reigns. The international airport is closed. No electricity is allowed. The concept is that if everyone hides inside, the evil spirits will think that Bali is deserted, and they will go elsewhere for their mischief. 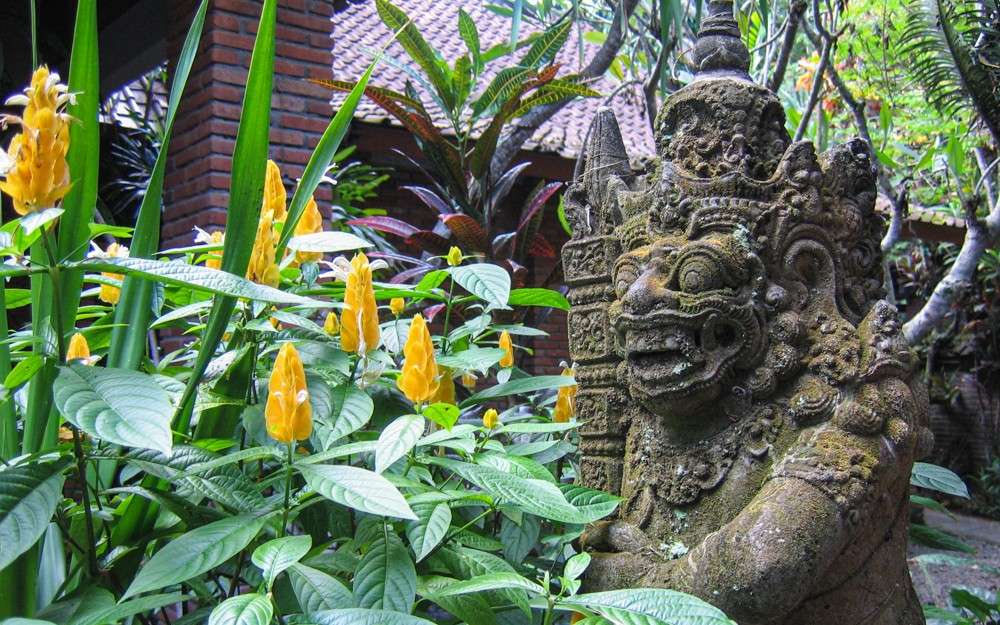 After a long quiet day of family togetherness and introspection, at dawn the next morning the Balinese head for the beaches and rivers for ritual cleansing and picnics to finish off the holiday in joyous spirits. 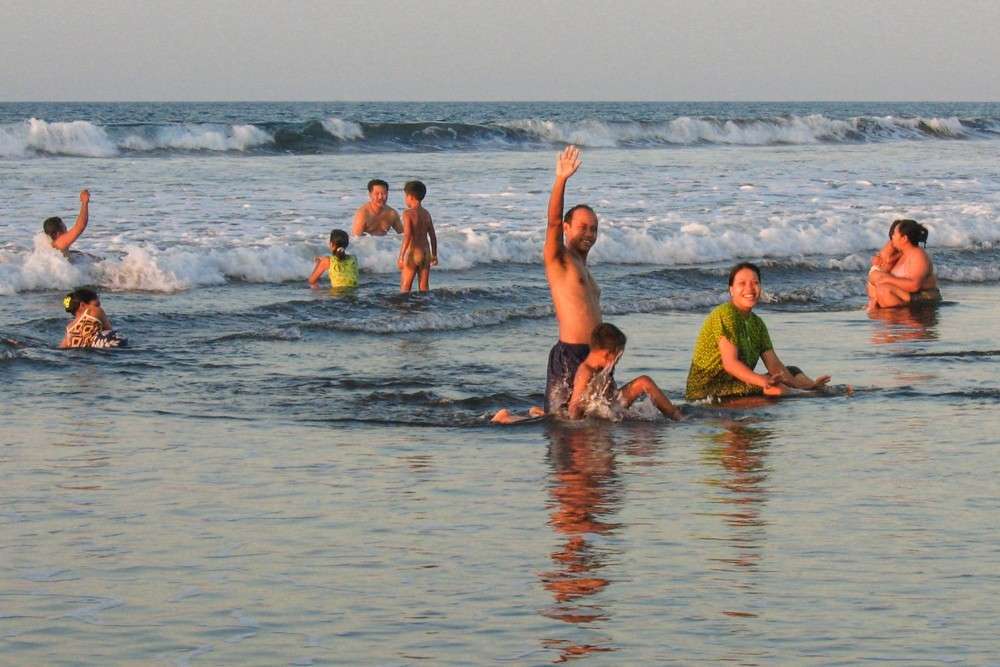 In Bali, all religious belief centers on the balance of good and evil. Despite the community’s best efforts on Nyepi, ancient wisdom says that one cannot banish evil; the best one can do is to manage it. That seems to be the wisdom we need, whatever our culture. Seriously, isn’t that what all our New Year’s rituals, reflections and resolutions are really all about—managing the future? And here we are in 2022, in the midst of a new Covid spike, desperately trying to manage the future. 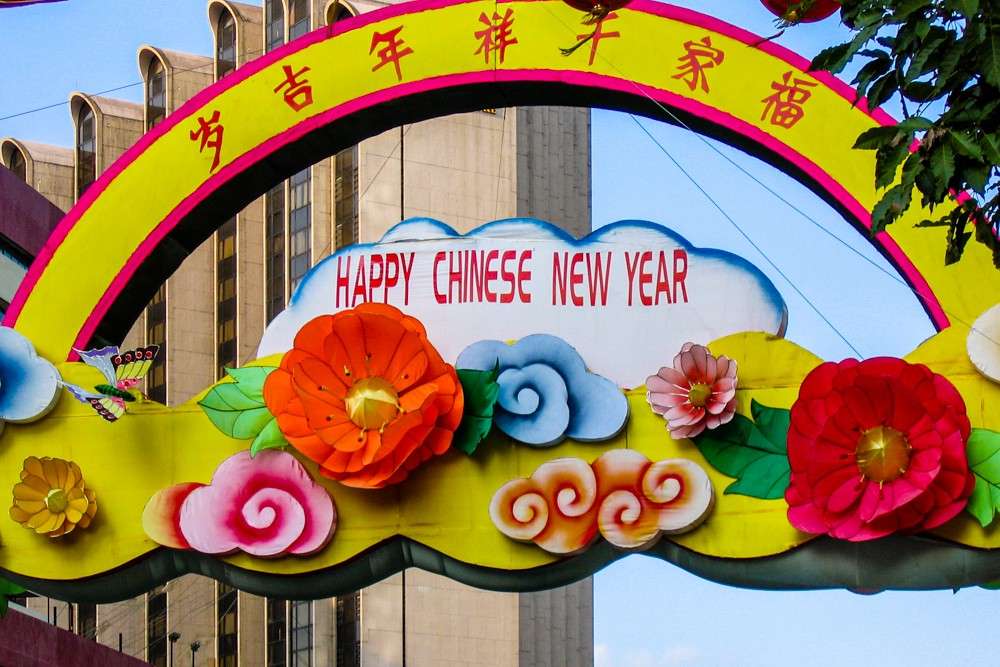 Eventually I was able to celebrate New Year—Chinese New Year—in Singapore.  Through Marilyn, our Rosh Hashanah hostess, I connected with a group of women from the Singapore congregation. They organized a ladies-night-out to sample Singapore’s signature Chinese New Year’s dish, Yu Sheng. The delicacy of raw fish, veggies, crispy rice and other ingredients representing good fortune came to the table perfectly composed. 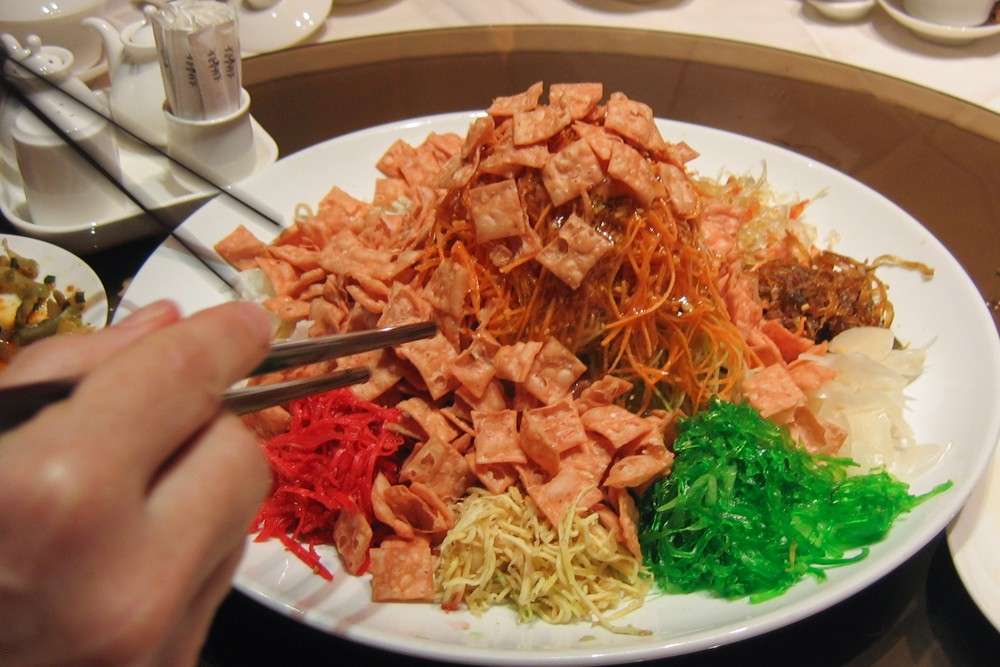 We watched expectantly as the waiter ceremoniously poured the salad dressing—the glistening oil symbolizes wealth—over the dish. With just a bit of urging we all stood up and put our chopsticks in the center of the platter. We enthusiastically tossed the salad as high as possible, generating good luck for the coming year. 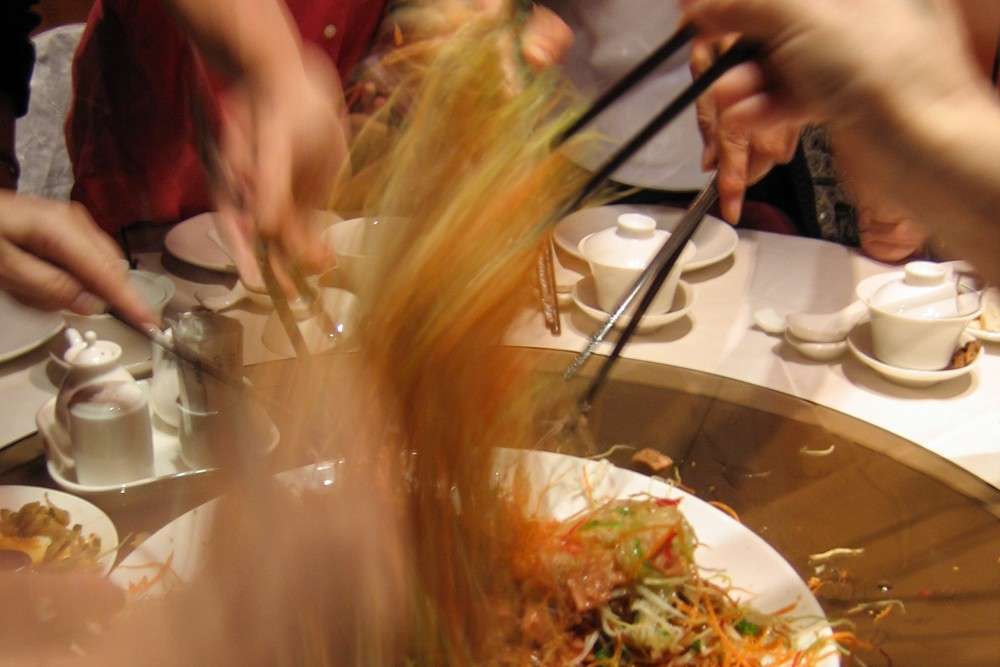 Walking back to the hotel, I noticed shop after shop filled with houseplant-sized stands of twisted bamboo. The twists and turns of the “lucky bamboo” represent changing fortune. I also was fortunate enough to see the God of Fortune dispense good luck in the form of golden glitter to throngs of excited revelers. I wonder what Chinese New Year will be like next month in the time of Covid. 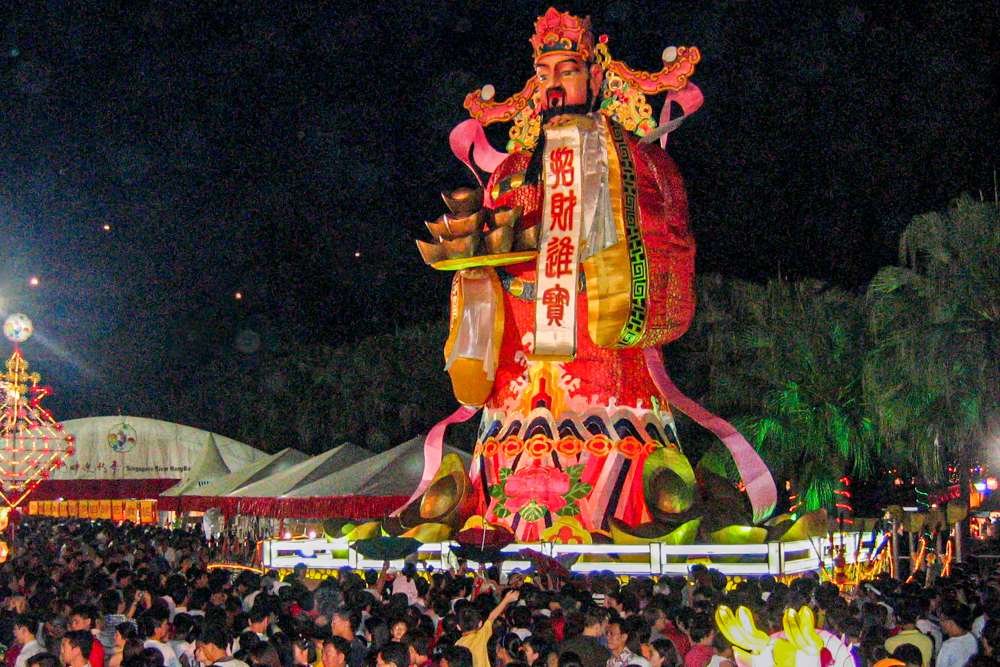 Six months in Asia reminded me in ways both petty and profound that personal control is elusive. Deep down, we all know that. Yet we create ceremonies and sacraments and invest food and objects with special meanings to give us the illusion of control on one hand and the magical means to court fortune and luck on the other.

We invent rituals and traditions to help us focus our intentions. But sometimes, like these past two years, that’s just not enough. On the other hand, I can’t help thinking that perhaps there is something like fate or good fortune. Otherwise, I would never have been blessed with four such different New Year’s celebrations in just six months.