Let’s go, let’s go,” urged Shantanu Singh, our guide for the day. It was 6 a.m. and dawn was cracking over the rugged Rajasthani hills. “We want to be the first jeep to get to the park,” he nudged as he picked us up at the Taj Vivanta Lodge to search for tigers in Ranthambore National Park. 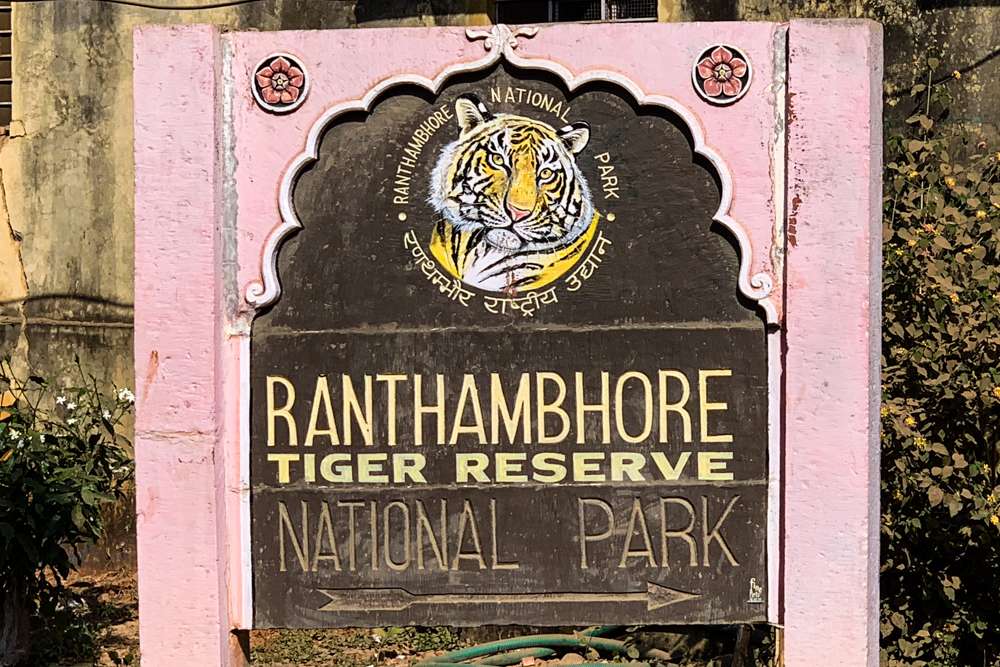 Tigers, the apex predator of Asia, once roamed the wilds from Siberia and the Himalayas south to Java and Sumatra. Now there are estimated to be only about 4,000 left in vastly diminished habitats. After much work and politics, international conservation efforts fighting poaching and encouraging responsible tourism have helped return the Indian tiger census to about 3,000 animals as of 2018.

Year of the Tiger and other myths

Culturally, of course, tigers are mythic creatures, the crown jewels of Indian magnificence, power and beauty, not to mention their prominent place as one of the twelve iconic animals in Chinese zodiac. Since the lunar Year of the Tiger begins in February 2022, this seems like an auspicious time to revisit one of the most exhilarating days I’ve experienced at home or away. 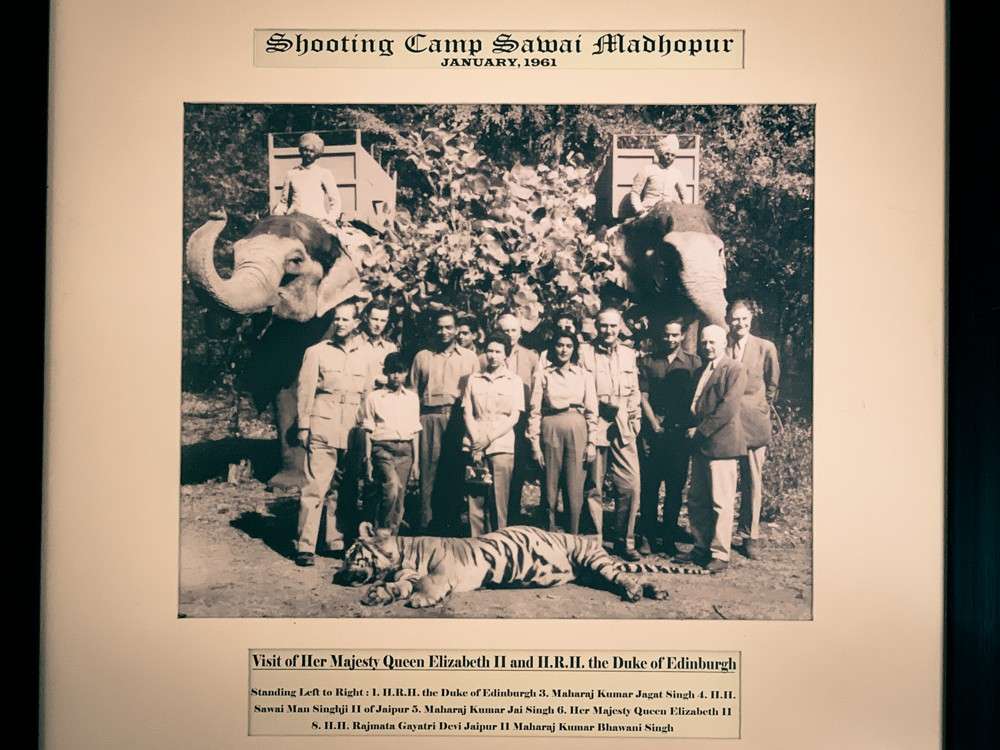 Tiger safaris—hunts in the old days—were once the prerogative of the maharajas and their guests. Indeed, being asked to join a hunt was a coveted invitation, especially if the invite came from the last ruling maharaja of Jaipur, the handsome, polo-playing Jai Singh, who built his art-deco lodge in 1930 for his personal guests. Today no invitations are needed. Just reservations. 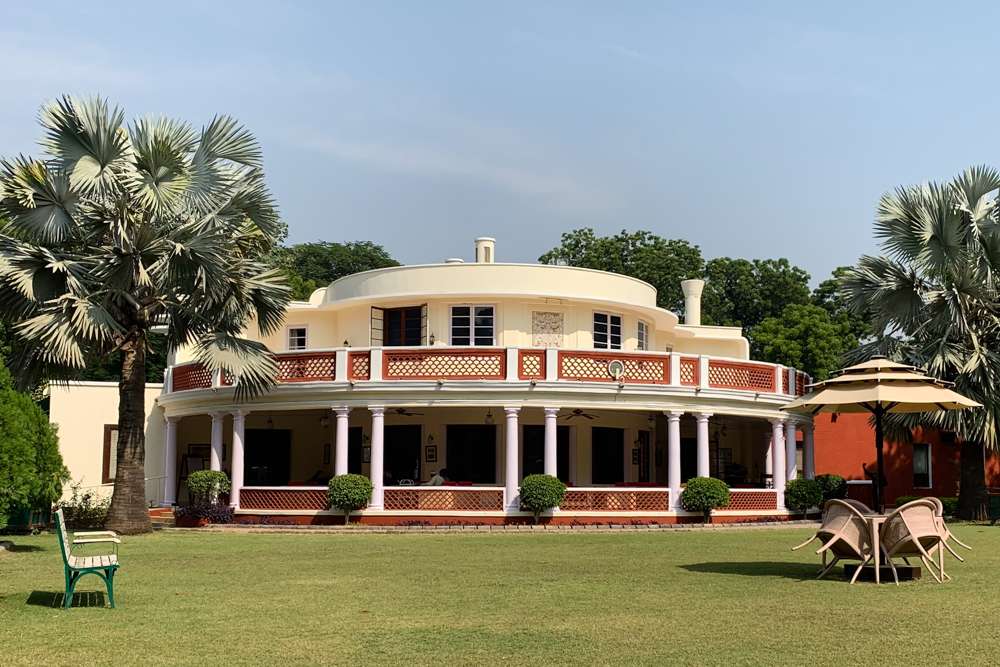 We arrived just before dinner. The other guests, back from their afternoon jeep tours, congregated on the wide curved veranda. Gin and tonics in hand, they munched Indian snacks and boasted or lamented their luck for the day. The lucky ones posted their sightings, including their names and the locations of the tigers they saw, on a chalkboard for all to see. That’s when we learned that the park is divided into 11 zones which are opened or closed at the discretion of the rangers. Our luck, it turned out, would depend on which zone we were assigned to. That night at dinner, we were impatient for morning,  just like kids waiting for Christmas. 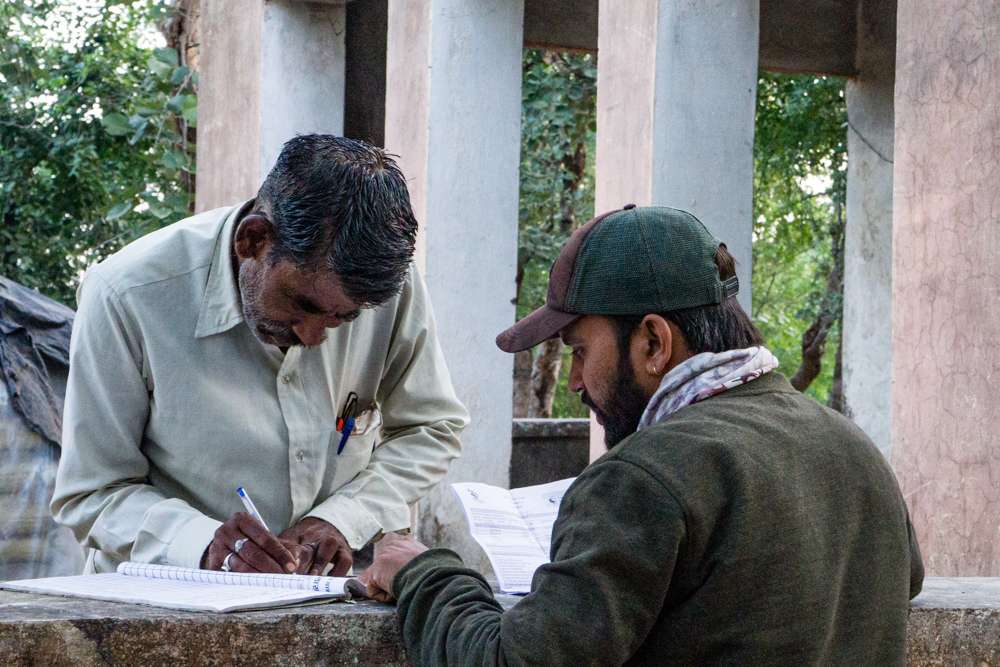 The early morning was cool when we climbed into the open air jeep with Shantanu Singh. A full moon lingered in the western sky as we sped through the still empty streets of Sawai Madhopur on our way to the park entrance, where the ranger assigned us to Zone 10. That was the end of the paved road. Our adventure finally began.

The search is on

I’d never been in an open jeep before.  It was bracing. The wind kept us cool. We could smell the earth. I was beyond excited as we bumped along the dirt track, up and down hills, across small streams and past wild peacocks and meadows full of deer. 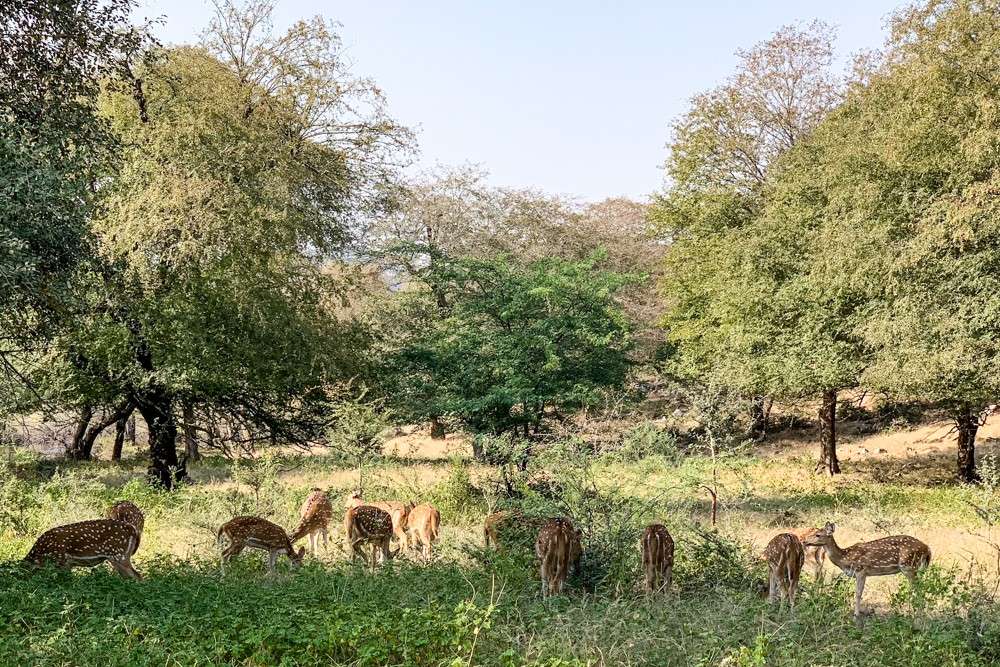 From time to time we stopped to scan the scene. During one stop Shantanu saw a fresh tiger print on the road, but there was no tiger nearby. I almost didn’t care because the ride through the pristine forest was so spectacular. 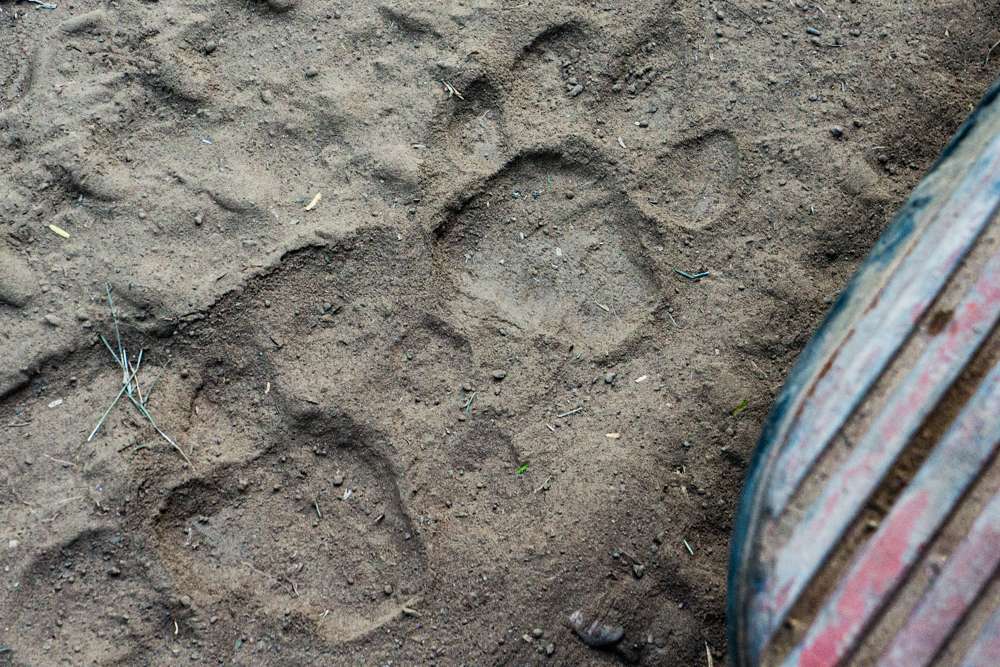 I felt like we were experiencing India as it was before the villages, before the forts, and certainly before the megacities. We paused close to a lake ringed with grazing deer. They seemed completely unconcerned. No tiger there. Driving deeper in the jungle, the birds and monkeys we saw were calm. It was time to move on. 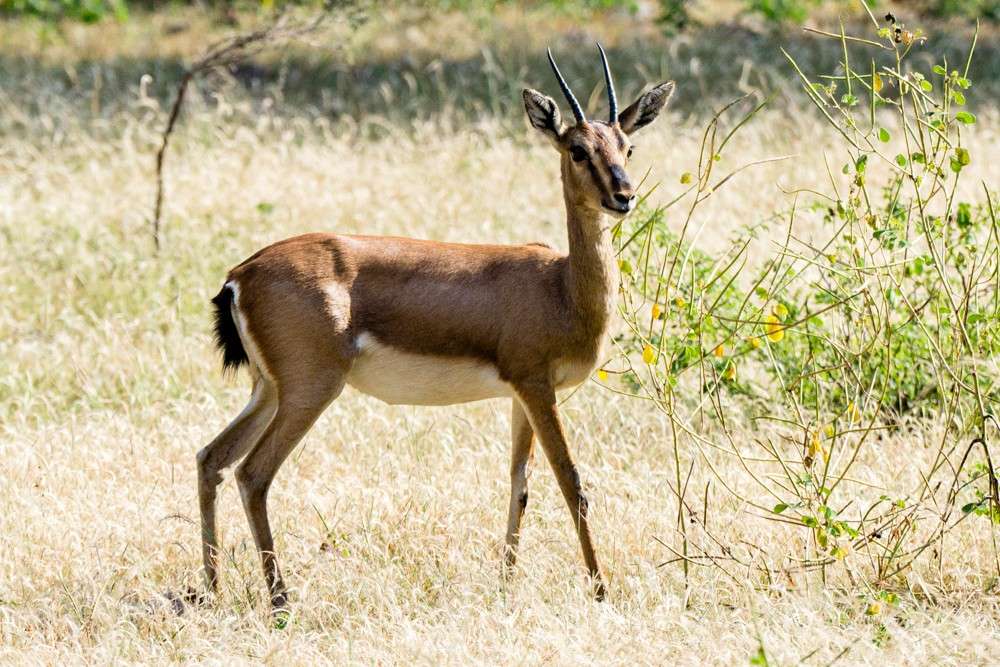 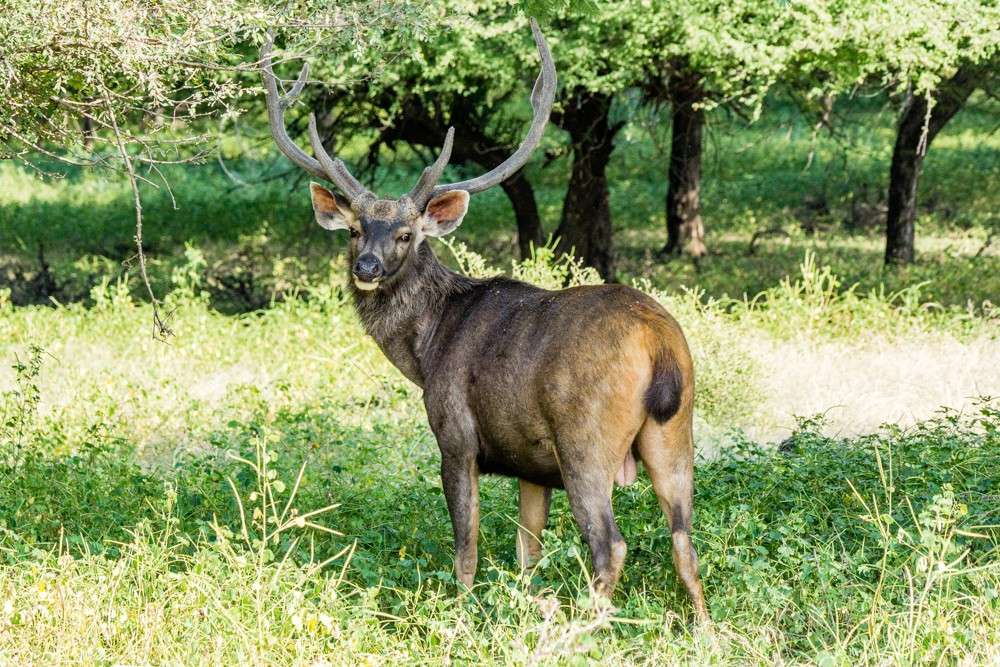 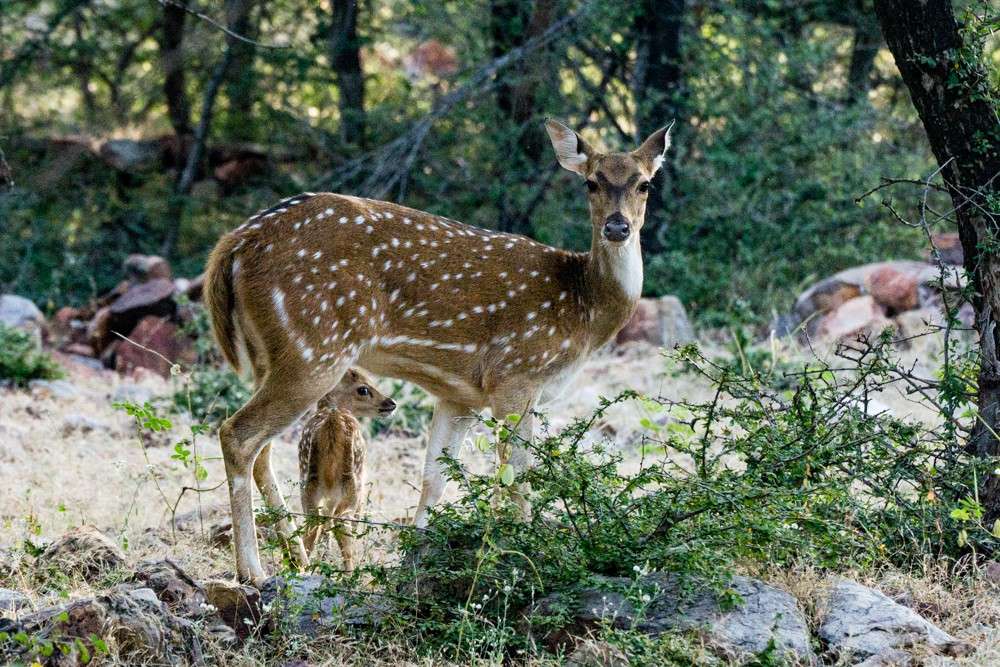 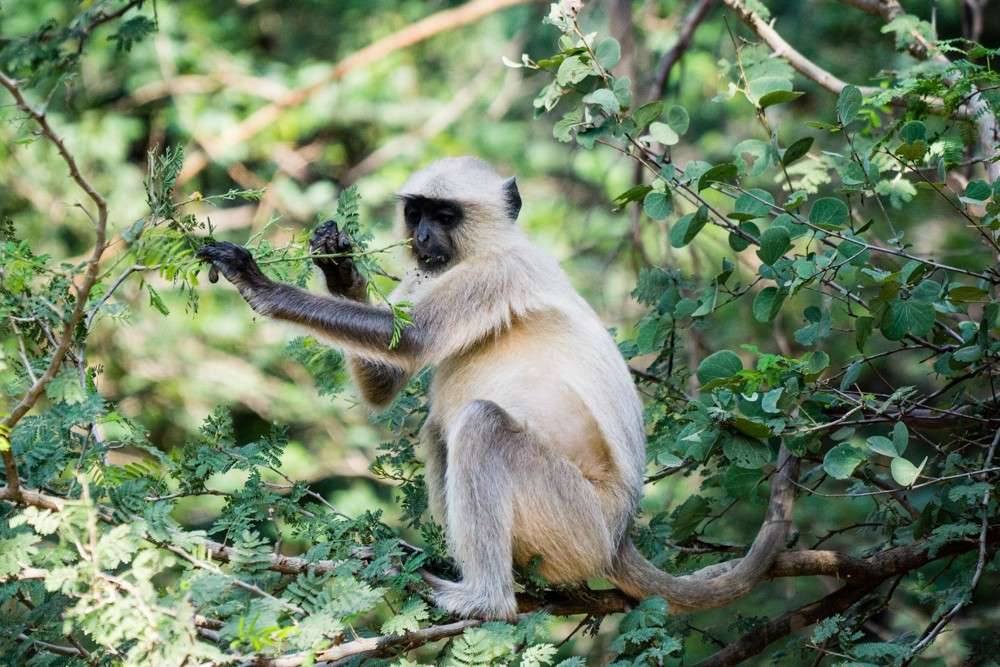 On our way back to the lodge for lunch, we gave one of the rangers a ride home. “Zone 6,” he told us. “People saw two tigers there this morning.” After our midday break, Shantanu hurried us along. “Let’s get ahead of the crowd,” he said. Like an Uber, we gave the same ranger a ride back to the park and got permission to head to Zone 6. 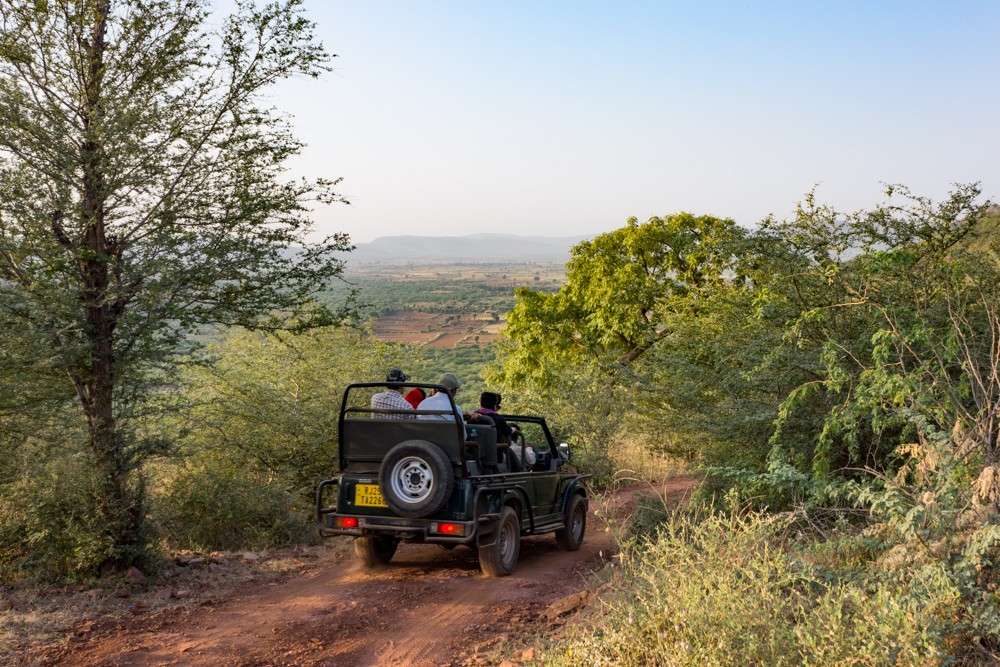 Back in the open jeep, we flew up and down hills, stopping to search near water, across meadows, along the craggy, dry hillsides. But there were no footprints, no warning calls from the deer, no cries from the birds. The afternoon shadows and our disappointment were growing. We really did want to take home a trophy photo of a tiger in the wild. 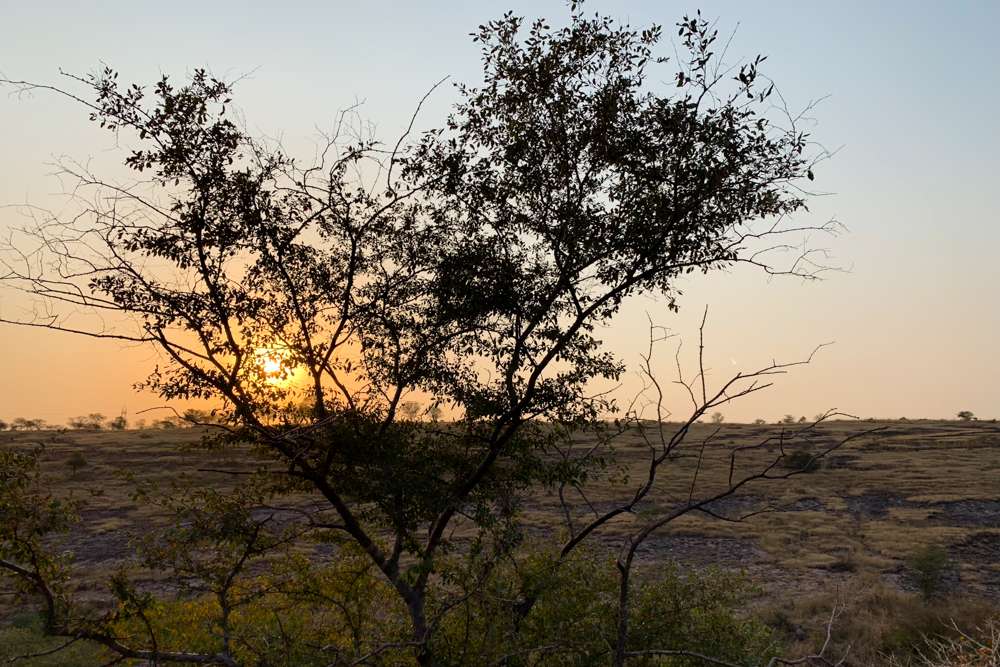 Late in the afternoon after bouncing down a steep slope, we saw a pack of jeeps up on a hillside across the ravine. They were parked all facing the same way. We wasted no time tearing up the hill and squeezing into a good view spot. 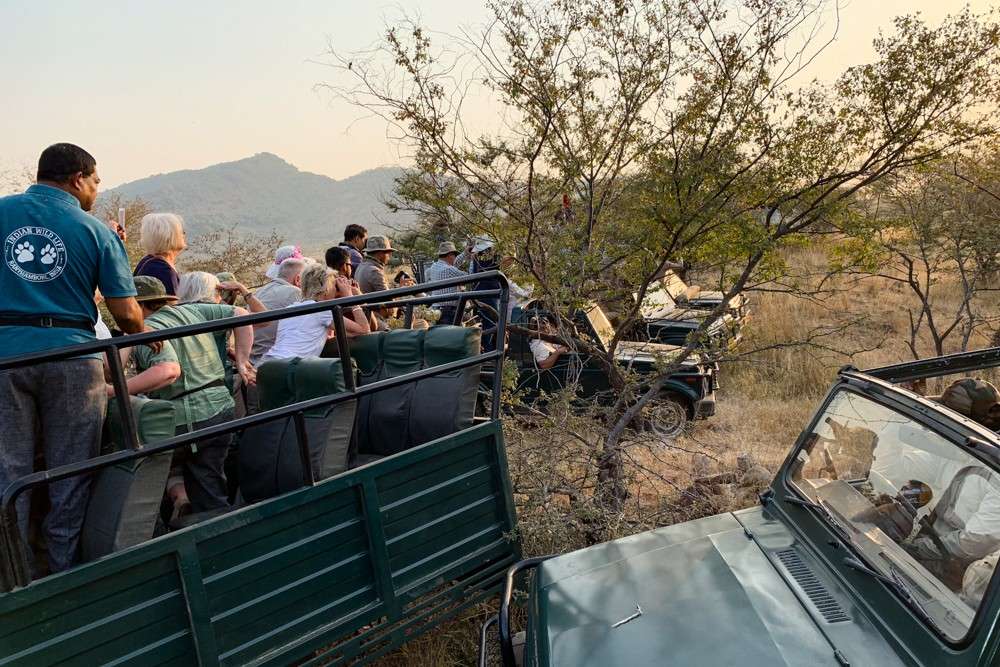 Beauty in the wilderness 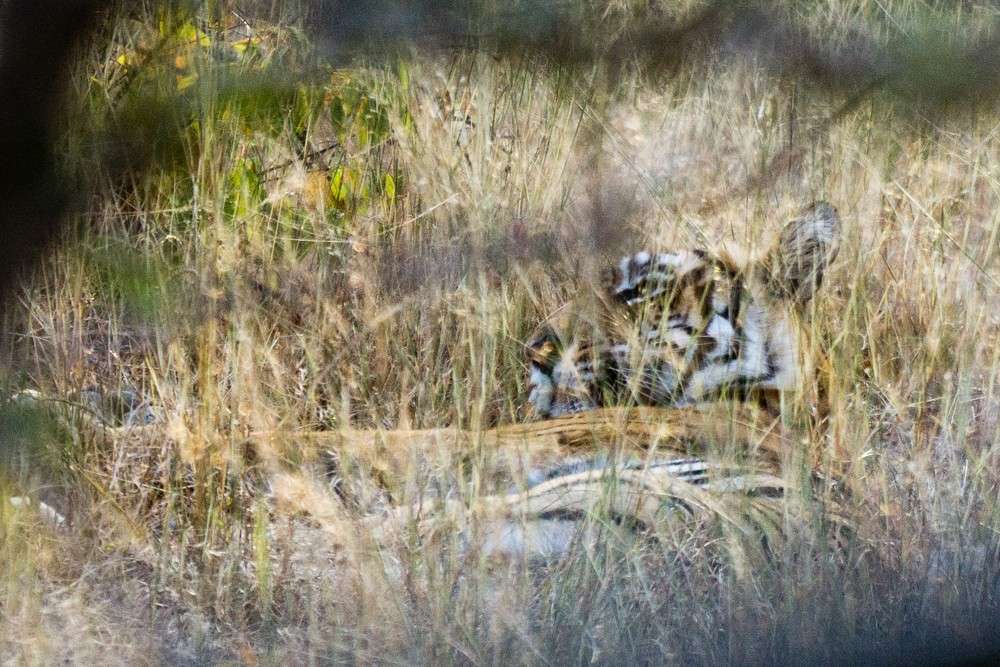 There she was, sleeping, hidden in the dry brush, her stripes merging with the branches and shadows surrounding her. Suddenly, her beauty sleep interrupted, she yawned, stretched and wandered off. We followed, finding a spot to watch her across yet another valley. 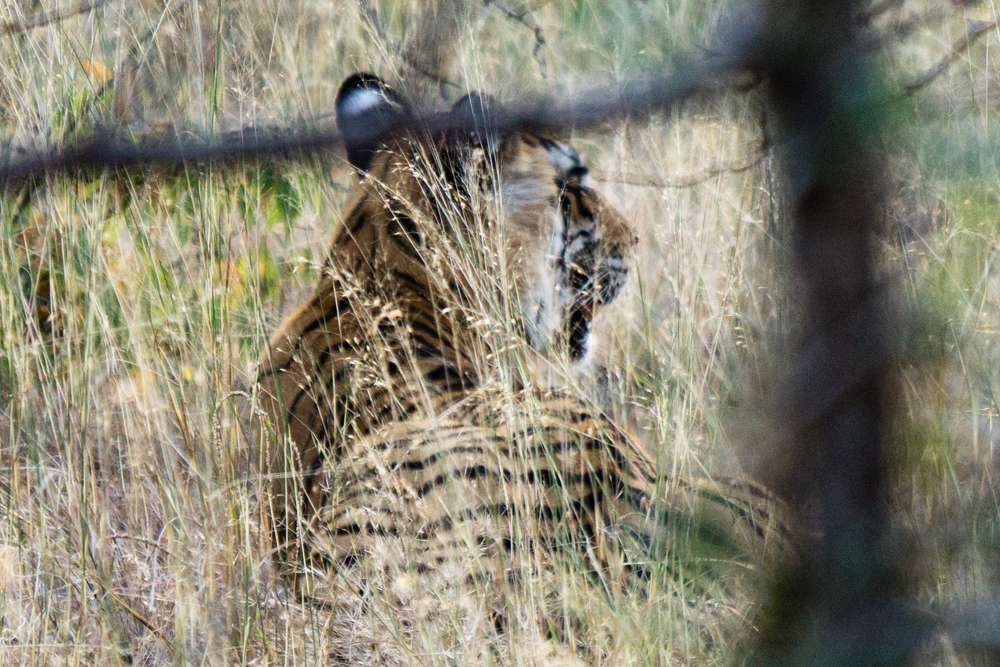 She lay down again, this time on rocky terrain the same color as her fur. David pulled out his telephoto lens and snapped away. Shantanu told us that the tigress is called Laadli (officially D-8). She and the other tigers are named for Bollywood stars. “Everybody knows their names,” said Shantanu. 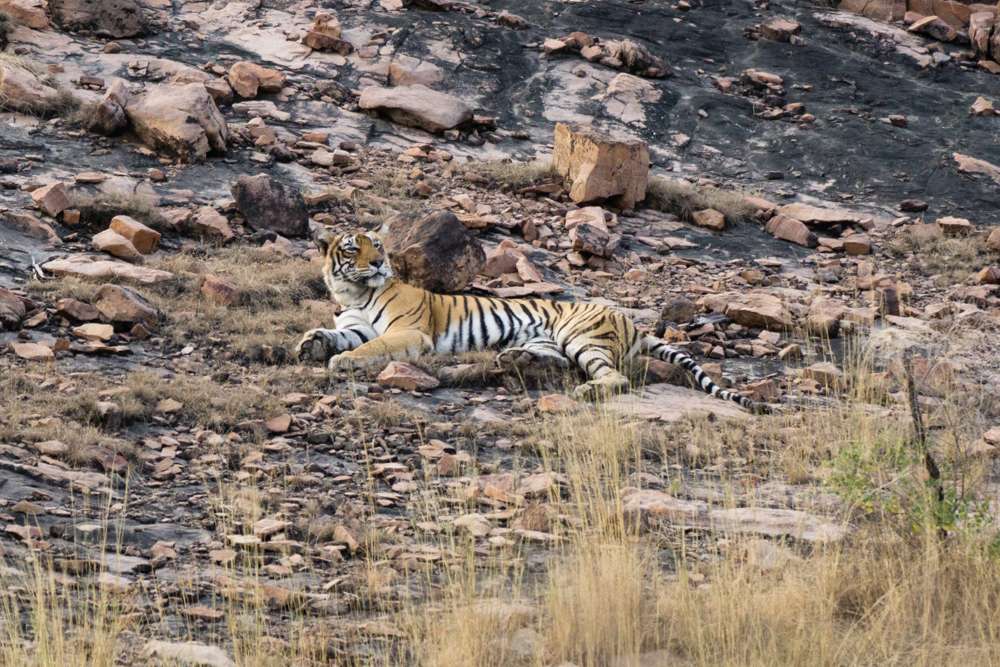 Content that we had our trophy shot, we started back. It was nearly five, and the park closes at six. Drivers are fined if they are late. But Shantanu, an endlessly enthusiastic guide and host, was not satisfied. He wanted to make one more stop. Around another twist in the road we found two parked jeeps near a lazy jungle stream. Just to our left in a placid pool of water, we saw two cubs—not babies, but independent adolescents—cavorting in the water, swimming, playing, thoroughly enjoying themselves. 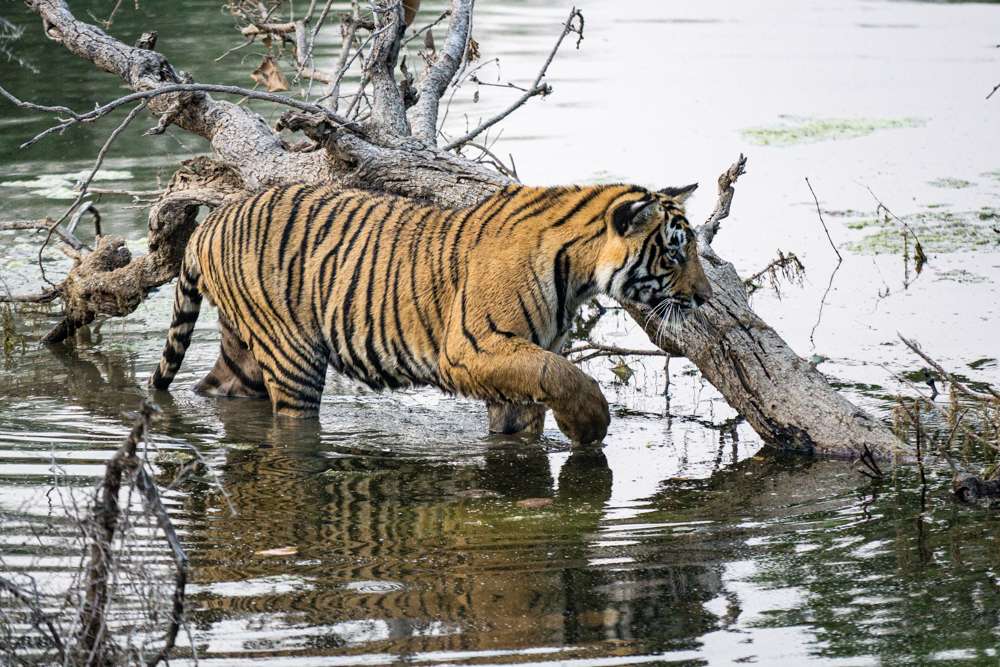 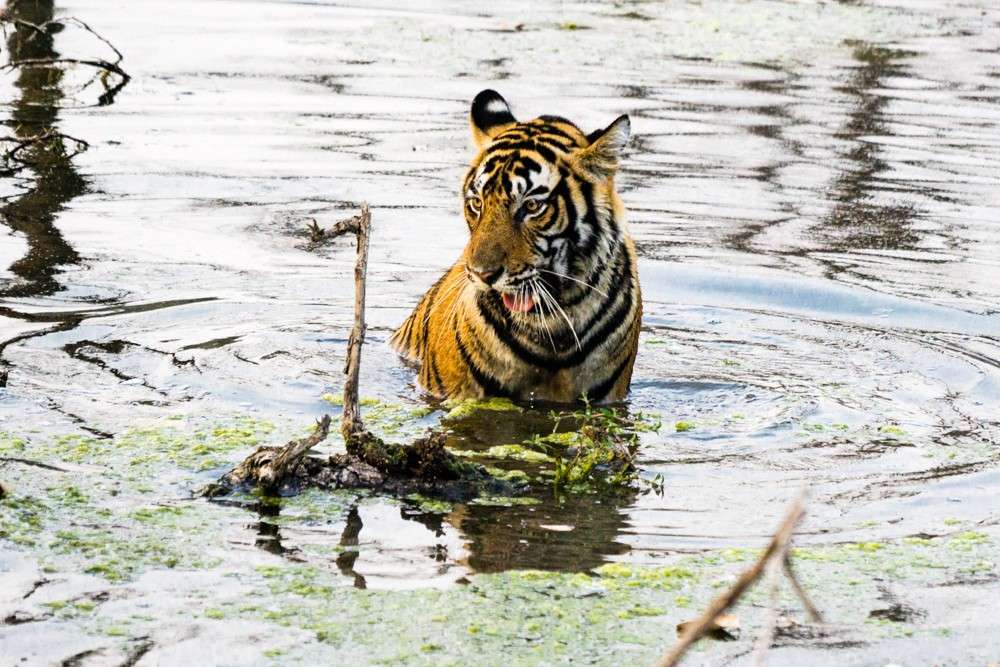 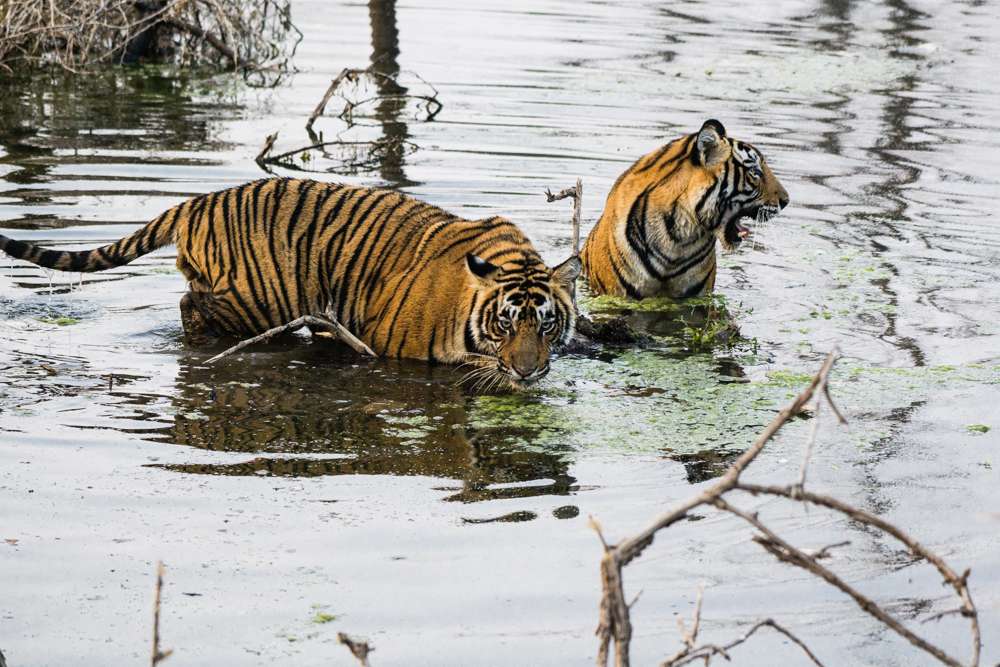 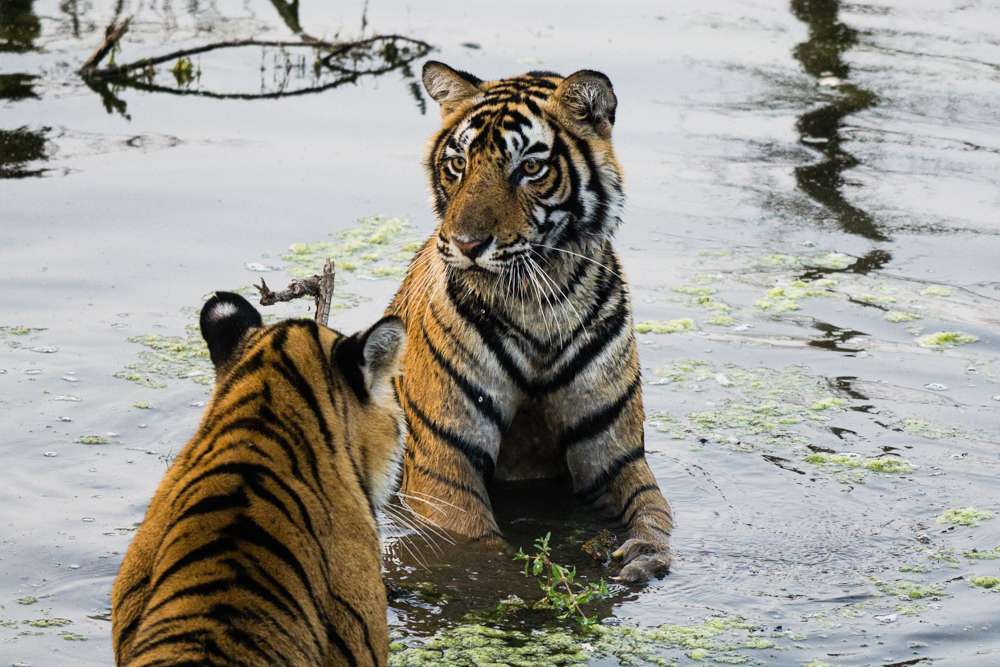 Ignoring the time, we watched until, completely unaware of us, Jai and Veeru calmly splashed out of the pool, sauntered across the road and disappeared into the bushes. Giddy with excitement, we were finally ready to head back. No maharaja could have given us a better day. 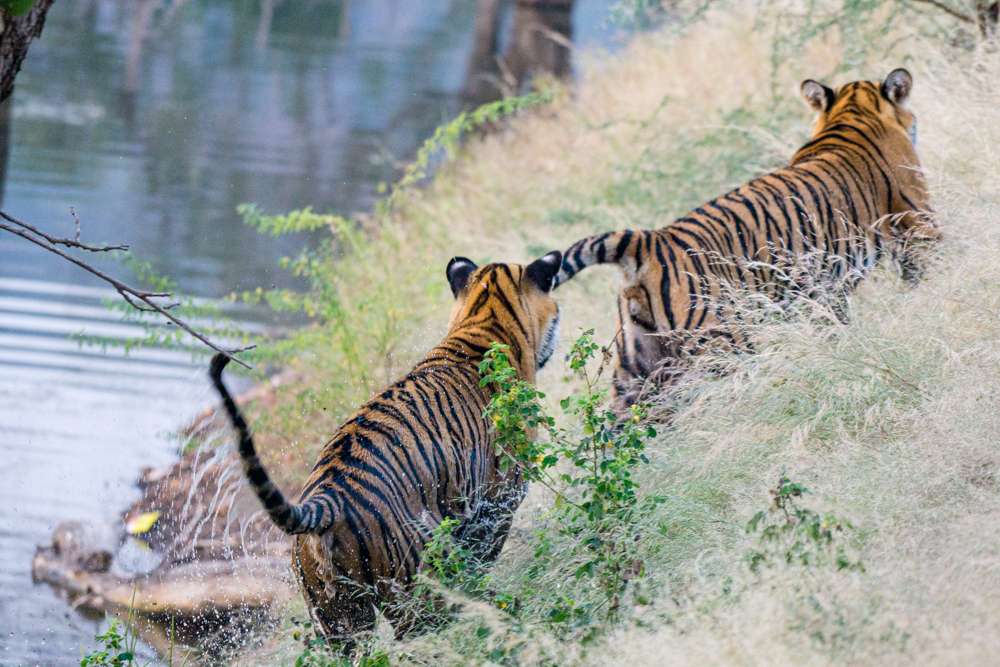 Back on the Taj veranda that evening, we were thrilled to add our names to the tiger chalkboard. The gin and tonic tasted particularly good that night.

Covid-related closures: India has closed its tiger parks to tourists during the pandemic because a few tigers in zoos in the U.S. and India have contracted the virus. Presumably the reserves will be reopened when the government feels it’s safe. Hopefully that’s soon.

Help protect wild tigers by supporting Fund For The Tiger: The organization concentrates on areas of Asia where effective conservation work is already being done and where tigers have a reasonable chance for survival. They also partner with Mountain Sobek Travel for trips to other remote tiger reserves in India and Nepal.