The tiger stalked my iPhone. I started to scream, but doubled over in giggles instead. It was all captured on the giant green screen overhead. The CGI tiger approached my hand. Close… closer… almost. As hard as I tried, I couldn’t position myself so the tiger actually grabbed the phone. I was a rank amateur “acting” at the virtual effects exhibit at the National Museum of Indian Cinema in Mumbai. Despite being in the heart of India’s vibrant film industry, I felt more folly-wood than Bollywood. 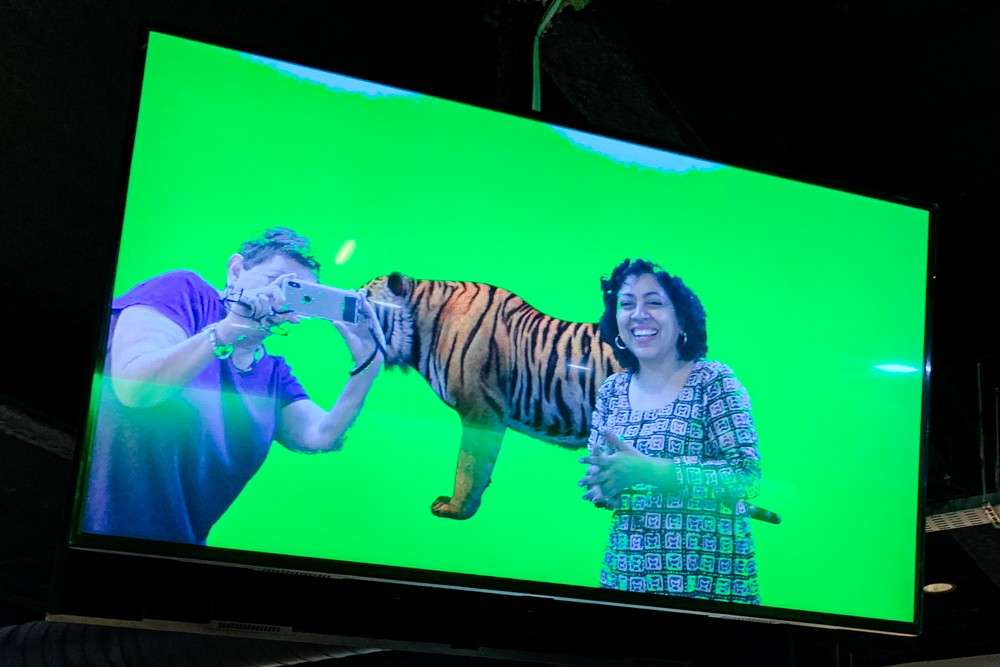 Bollywood. The word conjures visions of extravagant song-and-dance spectacles plunked into the middle of romances and sometimes even dramas. I’m not usually a fan of interrupting the plot—I always want to know if the right girl gets the right boy. But truthfully, my feet just start dancing when the music starts.

I grew up in Hollywood—my father led Universal’s trailer department for decades. Following in his footsteps, I studied documentary filmmaking in grad school at UCLA, where my films were barely amateur. But I had the bug, and when my husband David and I traveled to Mumbai in 2019, we wanted to get a peek into celluloid culture in movie-mad India, the most prolific film producing country in the world.

The National Museum of Indian Cinema

We were in luck. The new cinema museum opened the day our plane touched down. It was so new that none of our guides had been there yet. After our visit, we gave them capsule reviews. To complete our brief immersion into India cinema, we also scheduled a half-day tour of S. J. Studios, one of the few in the Mumbai to welcome visitors. But more about that later. 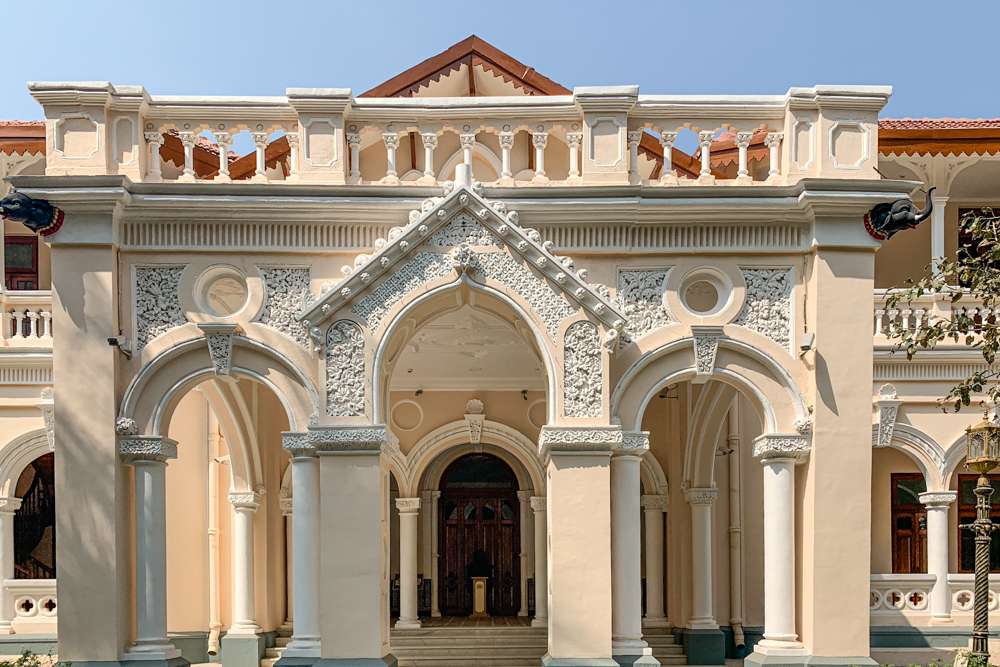 As we entered the elegant 19th-century “bungalow” that houses the museum’s initial exhibits, we felt like time rolled back. Its neighbor on the tropical campus of the Indian Films Division is a modern glass-and-steel building designed just for the museum.

Suddenly a young woman hurried across the grand hall and introduced herself. Sushma Kuvalekar, a Films Division animator, was helping out during the museum’s first week. “May I show you around?” she asked. With that, Sushma became our informal guide as well as my scene partner later on when I sparred with that green-screen tiger. 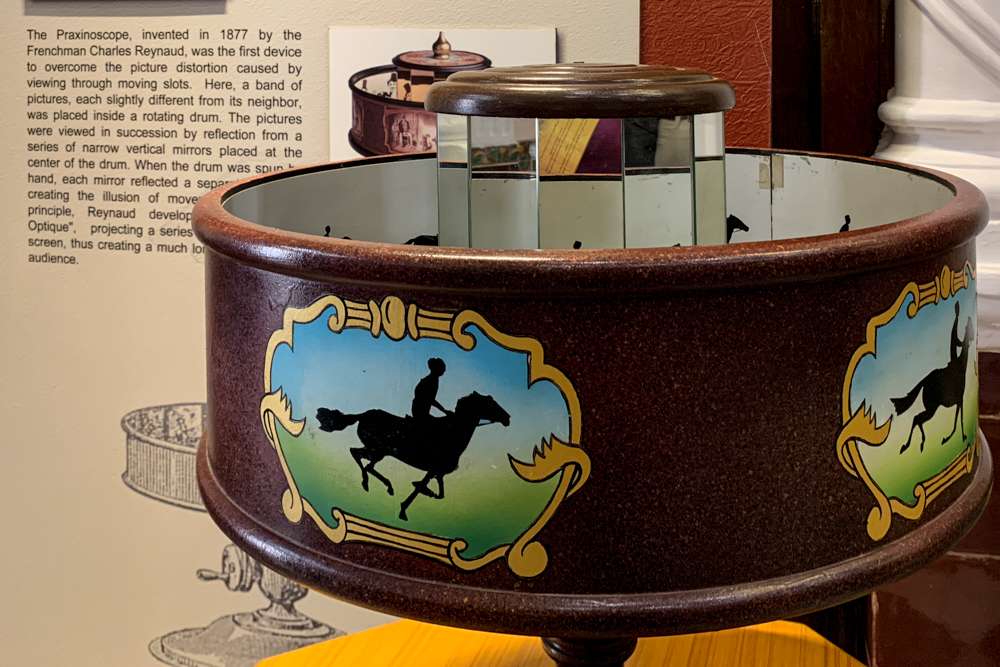 Sushma got us started at the display of a praxinoscope, one of the early moving image devices like magic lanterns and zoetropes that delighted 19th-century audiences around the world with their illusion of movement. 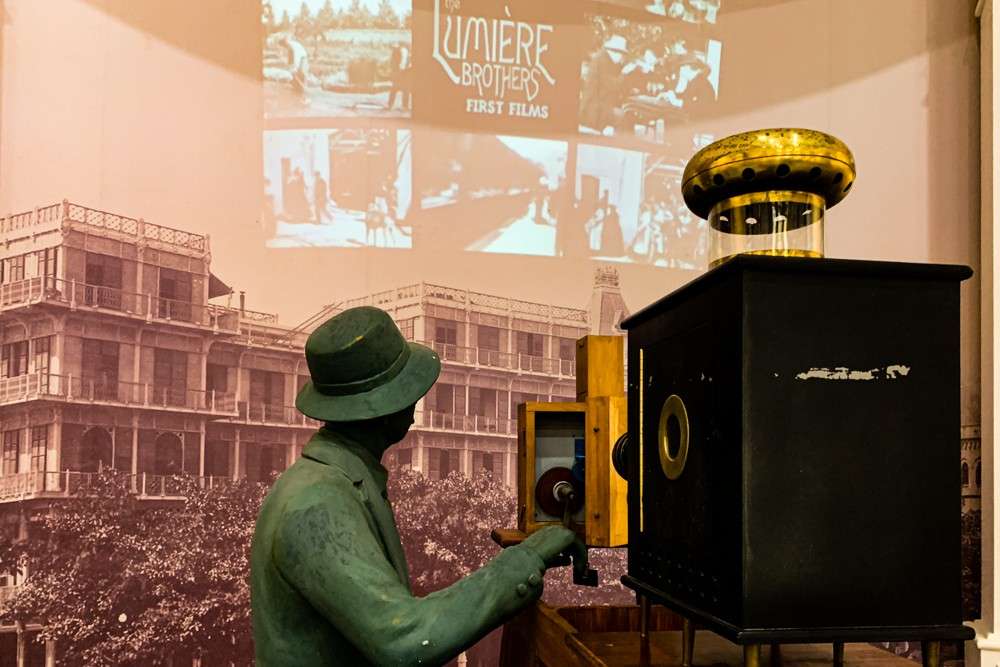 Real motion pictures as we know them came to India pretty much when they were introduced to the rest of the world. The Lumière Brothers sent a representative to Mumbai from France in 1896 to demo their magic cinématographe machine, barely a year after its debut in France. It didn’t take long for Indian entrepreneurs to start erecting tents to show primitive silent films to eager audiences.

From classic tales to celluloid legends

Cinema found a receptive home in India, where visual, sequential storytelling was already a familiar concept. 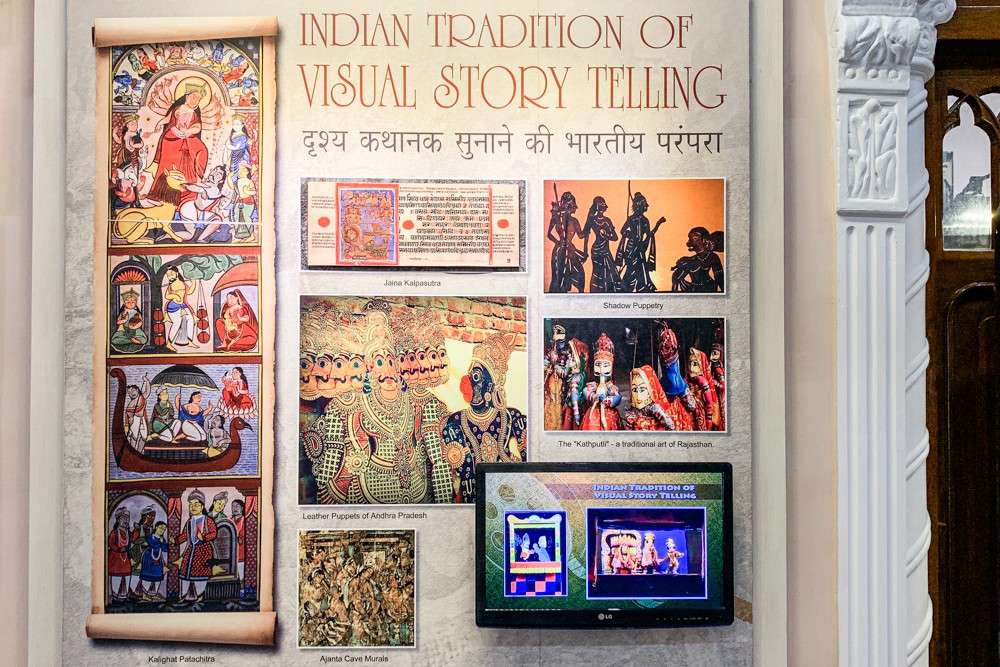 A brightly colored exhibit with an interactive multimedia display suggests that movies were the next step in the long Indian tradition of using puppets and scroll paintings to recount classic Hindu tales. Narrated by a dramatic singer and accompanied by simple live music, these presentations were a common entertainment throughout India.

So it was no surprise when we learned that India’s first feature, the 1913 silent film Raja Harishchandra, adapted an ancient Sanskrit epic about a king who clung to truth despite a lifetime of ordeals. Its producer-director Dadasaheb Phalke is seen as the pioneer of India’s film industry. It wasn’t long before short novelty films shown in tents gave way to elaborate features presented in fanciful movie palaces. 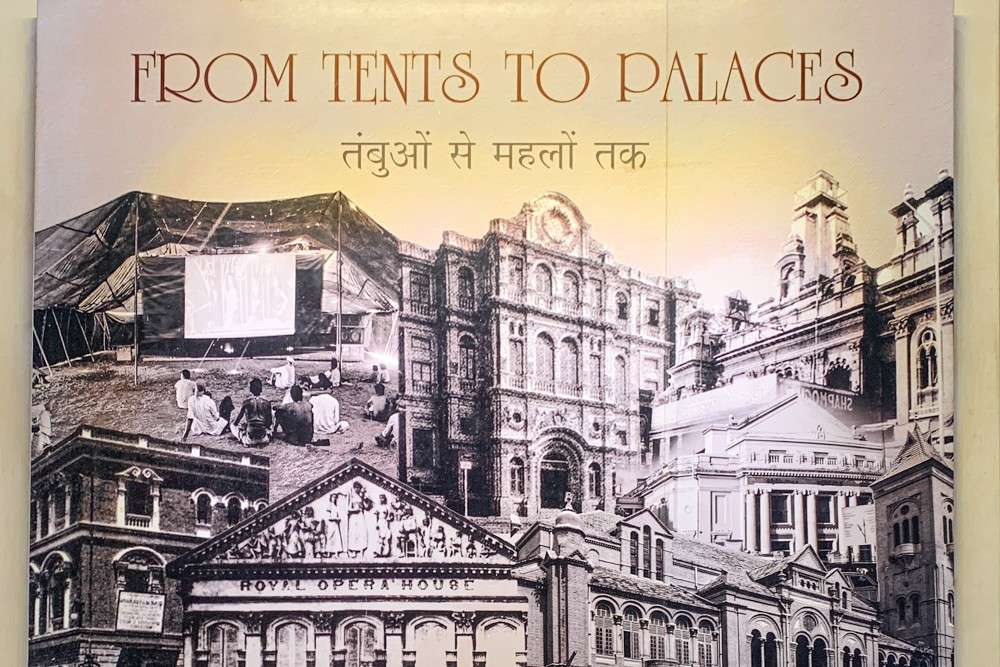 Throughout the museum we encountered comprehensive displays that brought the history and science of Indian filmmaking alive. Signs in English and Hindi cater to both Indian nationals and international travelers, and interactive multimedia stations allow visitors to delve deeper into India’s love affair with the movies.

There was so much to see. Sushma guided us to galleries on India’s first filmmakers, the heroines of Indian silent cinema, early talkies and the advent of sound. We learned that many of India’s early female stars were Jewish because it was unseemly for proper Hindu or Moslem women to become actresses. 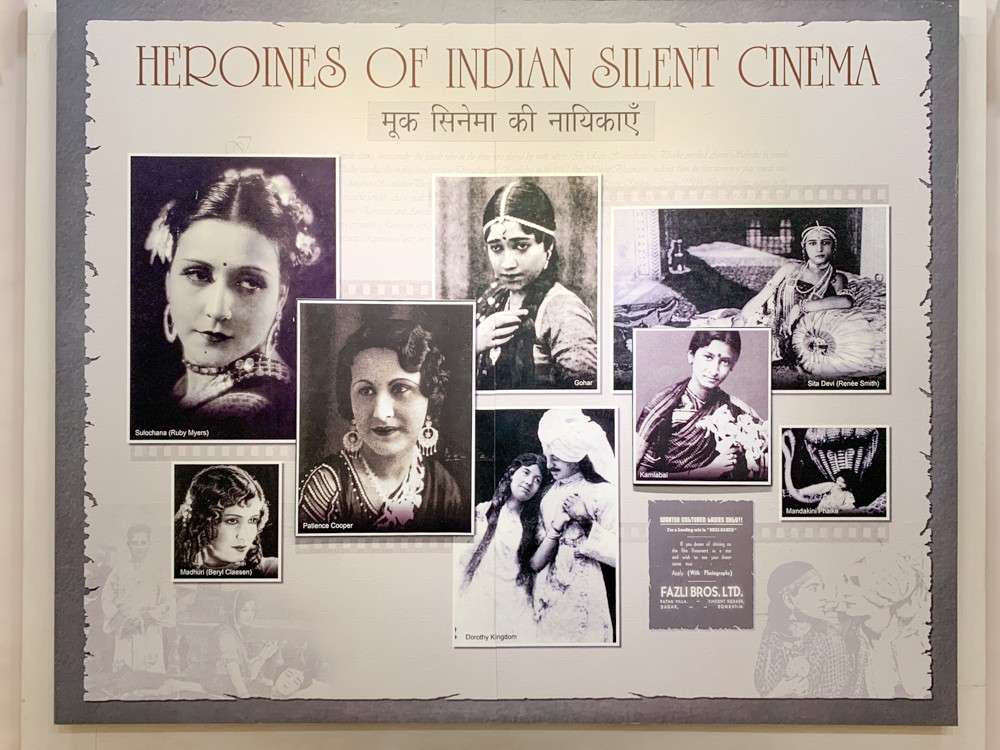 We also discovered how Indian filmmaking evolved from classical mythological stories to more realistic movies with Satyajit Ray’s internationally acclaimed Apu Trilogy. Before wandering across the campus to the new building, we traced the timeline of 100 years of Indian cinema that snaked along the hallways of the heritage building. 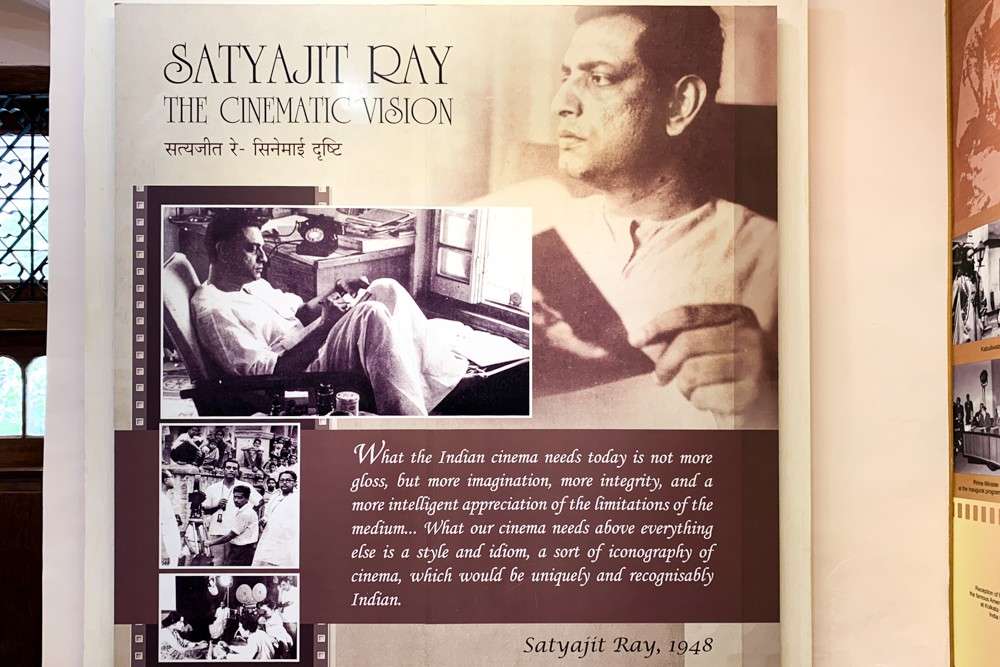 As international travelers, one of the most moving exhibits described Mahatma Gandhi’s complicated relationship with cinema. Here we explored the power of movies to make the case for Indian independence and to forge a national identity in the vast multiethnic, multilingual country.

“Gandhiji never liked cinema or mingled with cinema people,” said Sushma. “But he is such a political hero that many films have been made about him.” He succumbed to the magic of movies only once in his life, seeing his first and only Indian film when he was 75. And yet he fascinated filmmakers. Some early, allegedly non-political films camouflaged his quest for Indian independence in tales of Indian mythology to evade the censors, not always successfully. Several films from the 1930s and 1940s carried his message forward, despite the British trimming scenes and clipping dialog. And then there are the many biographies, including Richard Attenborough’s Gandhi, must-see viewing before any trip to India. 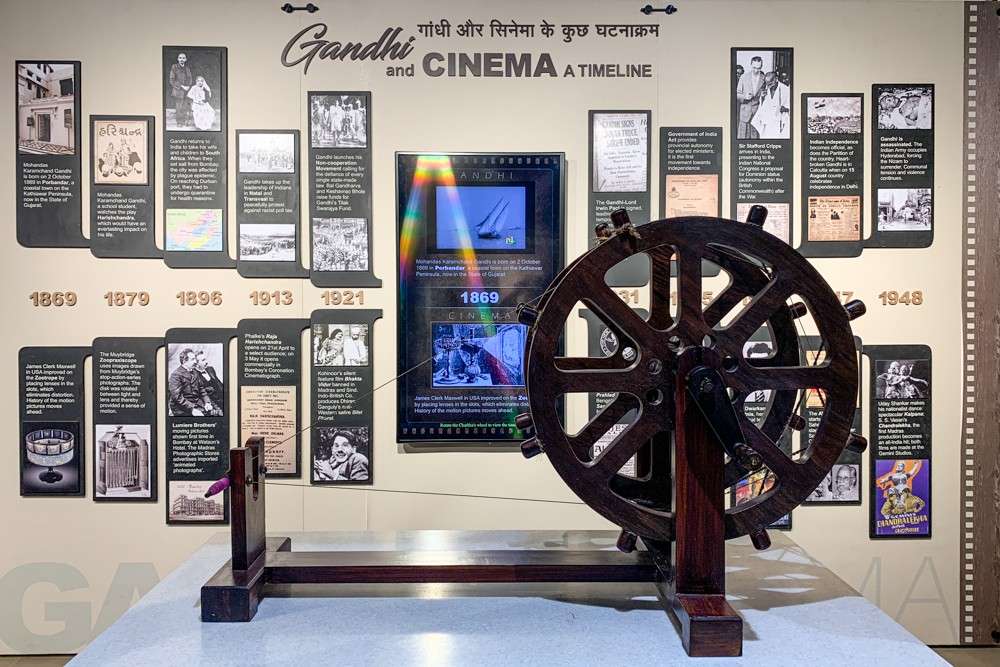 Aftter we got home, I reached out to Amrit Gangar, consulting curator for the museum. He told me by phone from Mumbai that Gandhi met with Charlie Chaplin in London in 1931. “Chaplin wrote about the meeting,” said Gangar. “Chaplin asked Gandhi how he planned to win independence with a spinning wheel, which led to a discussion of machinery.” Their conversation, recounted in the museum, was one of the inspirations for Chaplin’s classic film Modern Times.

The science behind movie magic

With a polite nudge, Sushma ushered us upstairs. Suddenly, just like in the movies, we cut quickly from the intersection of movies and politics to green-screen tigers and other technical wizardry in the immersive, so-called Children’s Film Studio. 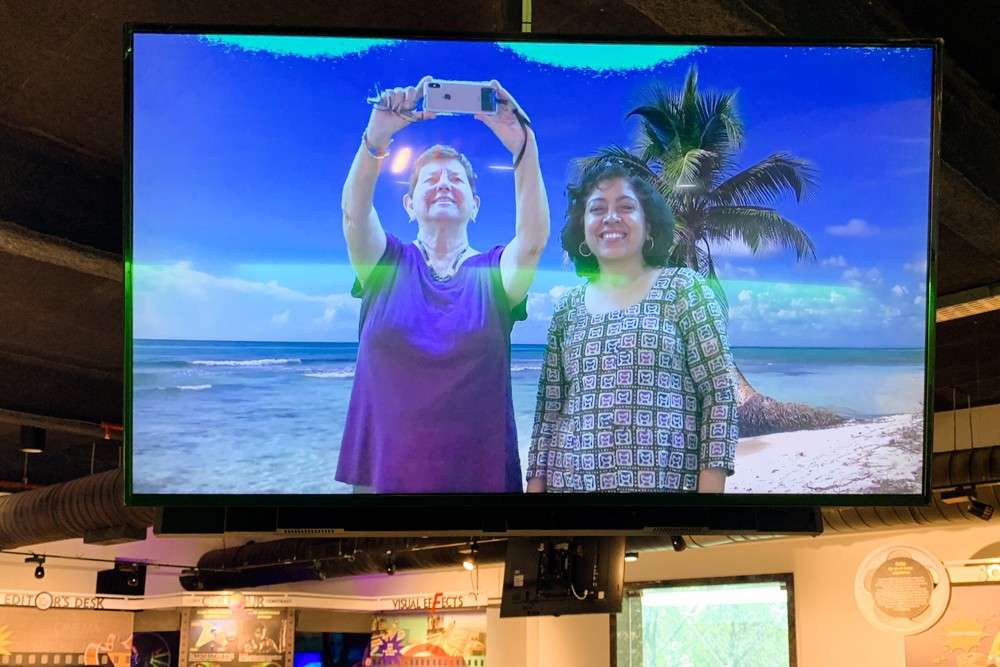 Trust me. It’s definitely not just for children. Visitors can shoot small scenes or try their hands at editing and recording. While Sushma and I flirted with tigers and dallied on a virtual tropical beach at the VFX station, David donned earphones and played sound engineer at the Foley sound-effects display. We were all having a ball. 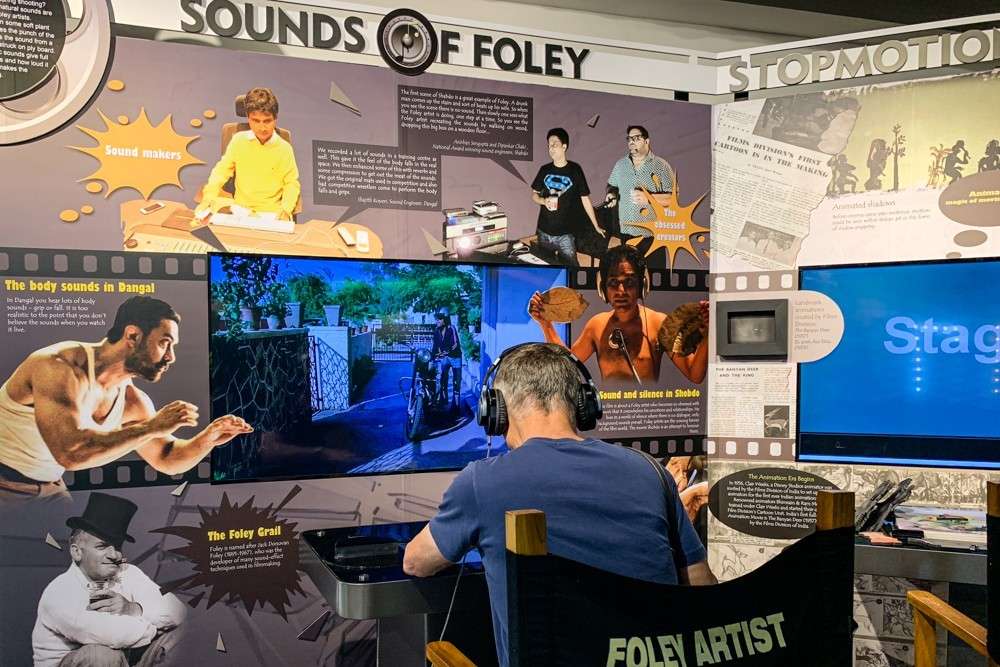 Technology is king on the third floor with an expansive array of filmmaking artifacts: cameras, lights, lenses, filters, animation cameras, individual directors’ notes, sound systems, recording devices, mixing boards and projectors in all sizes from 8 mm to a big arc projector. I felt nostalgic, even sad, as I realized that the once-universal filmmaking tools I was trained on in graduate school are becoming historical relics as technology marches from film to digital. 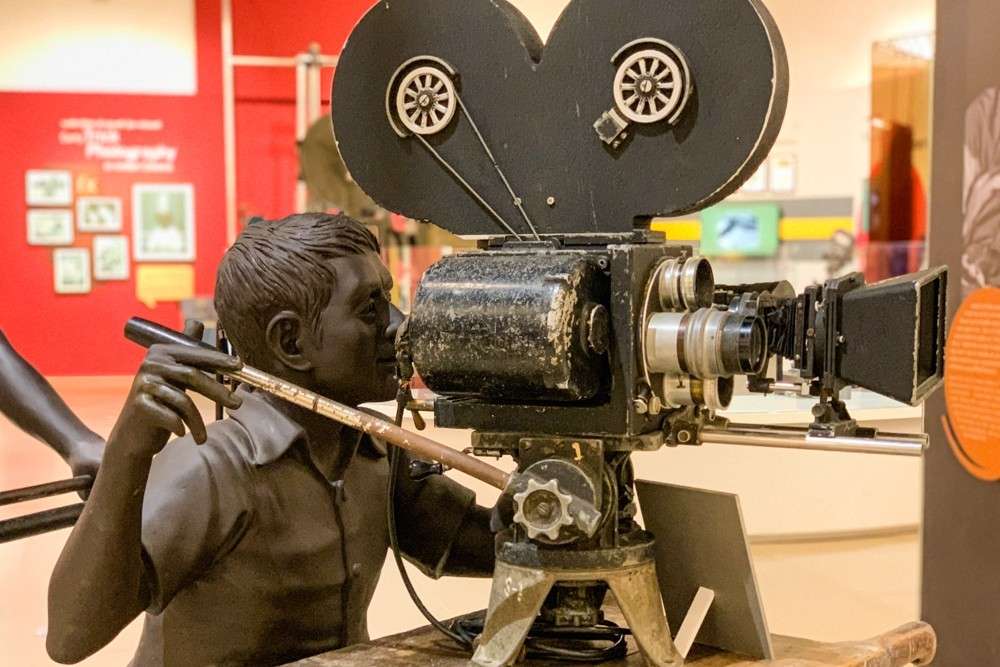 S.J. Studios brings international visitors into the here-and-now of Mumbai’s movie industry. But first, getting there brought us into the here-and-now of Mumbai’s legendary traffic. We drove across the flyover approach to the airport, under elevated tracks for the city’s commuter railroad, and past neighborhoods teeming with Saturday shoppers. The people we saw along the way—Hindu, Muslim, workers and middle-class—were just a tiny fraction of India’s vast audience for features, TV shows, soaps, commercials and videos. 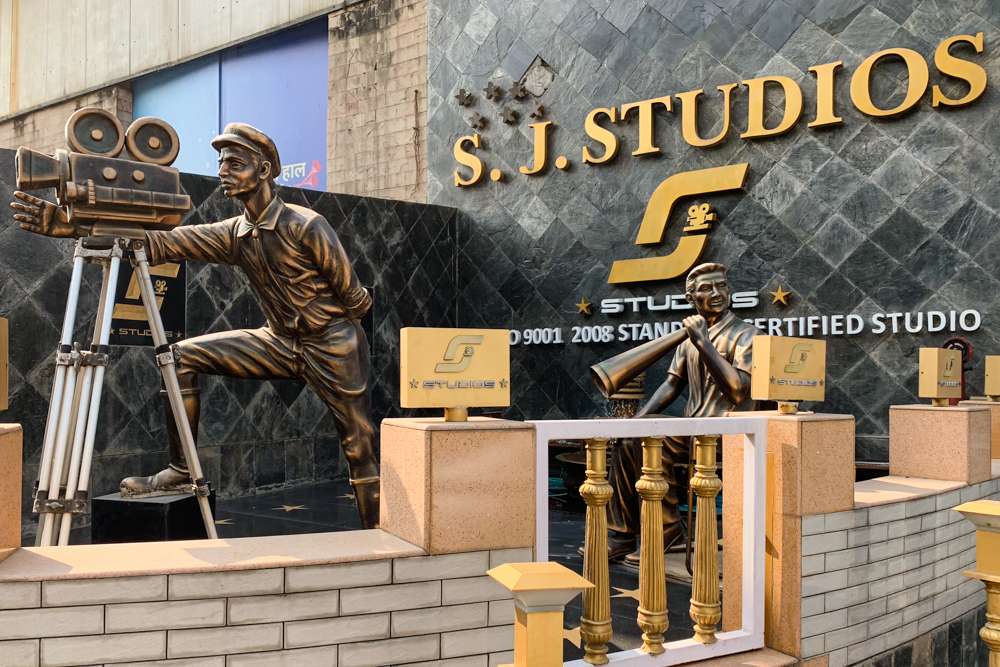 I was excited to see a Mumbai movie studio. One of my childhood joys was exploring the Universal backlot with my father when relatives visited Los Angeles. In those days before studios became theme parks with public tours, I loved seeing the fake streets that could become New York or Paris and the sound stages that could be transformed into anything, anywhere. 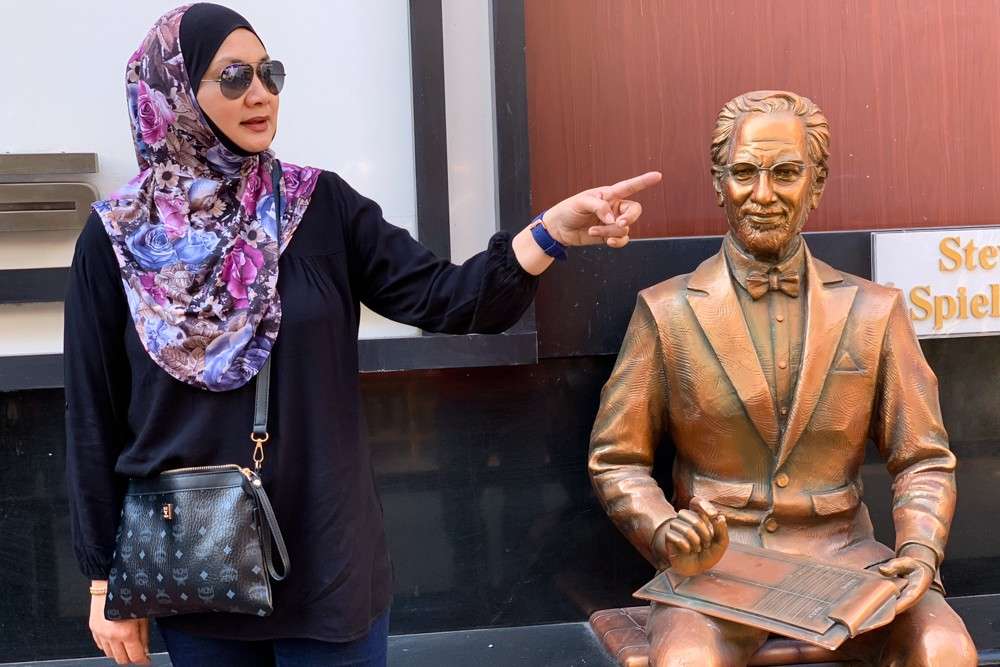 Although the 20-year-old S. J. Studios is much smaller than Universal, the intimate backlot experience reminded me of those childhood excursions. 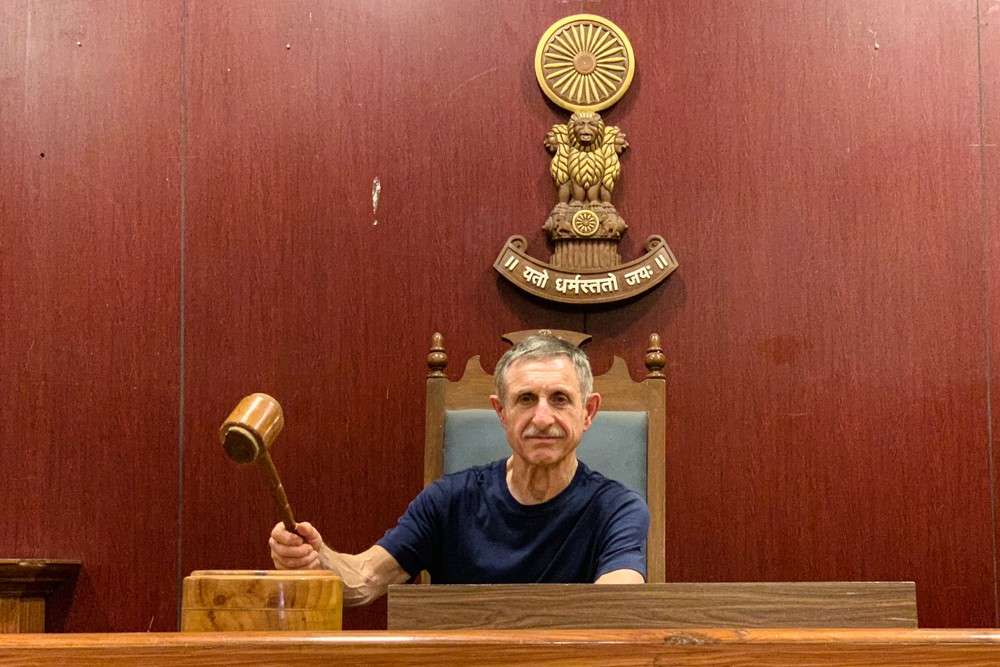 We did the silly tourist things one does on a studio tour. We posed for selfies in a jail cell, and David, a retired lawyer, banged a gavel in the courtroom. I got a wave of faux empathy for an imagined weeping mother when we wandered by the hospital set. Across the hall, the generic office could be dressed up or down, glam or tacky, depending on the scene. We enjoyed playacting on the empty sets. 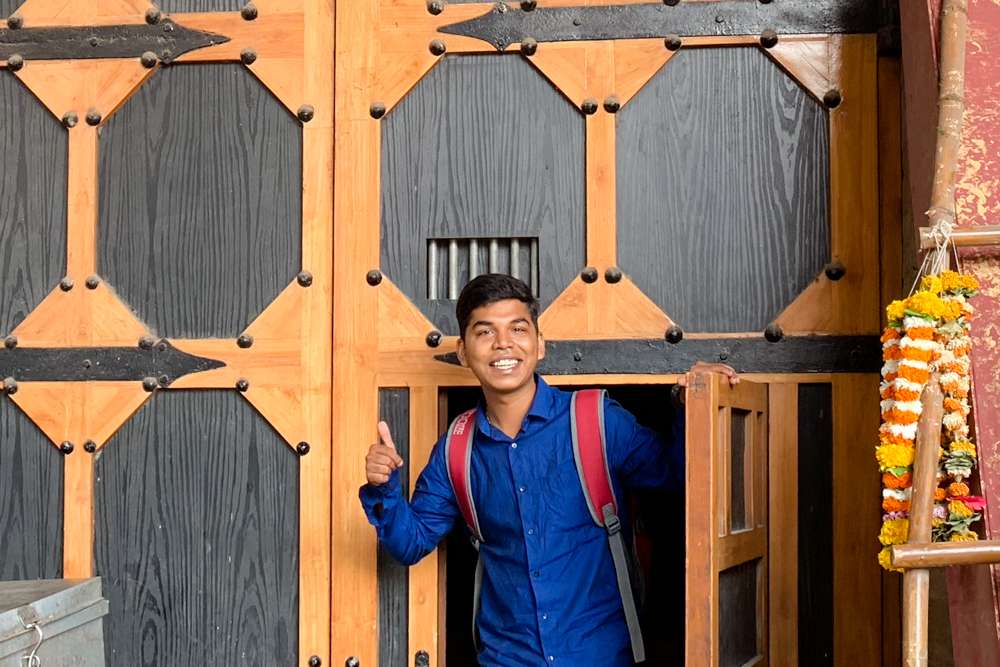 While we explored, our guide Gurmit Maurya excused himself to see if we would be welcome on the set of a popular soap being shot that afternoon. He came back waving his arms with excitement.  “Come, come! They are about to do the wedding scene.” A wedding scene? In India? We’d always wanted to see a real Indian wedding. Maybe this would scratch the itch. Off we went. 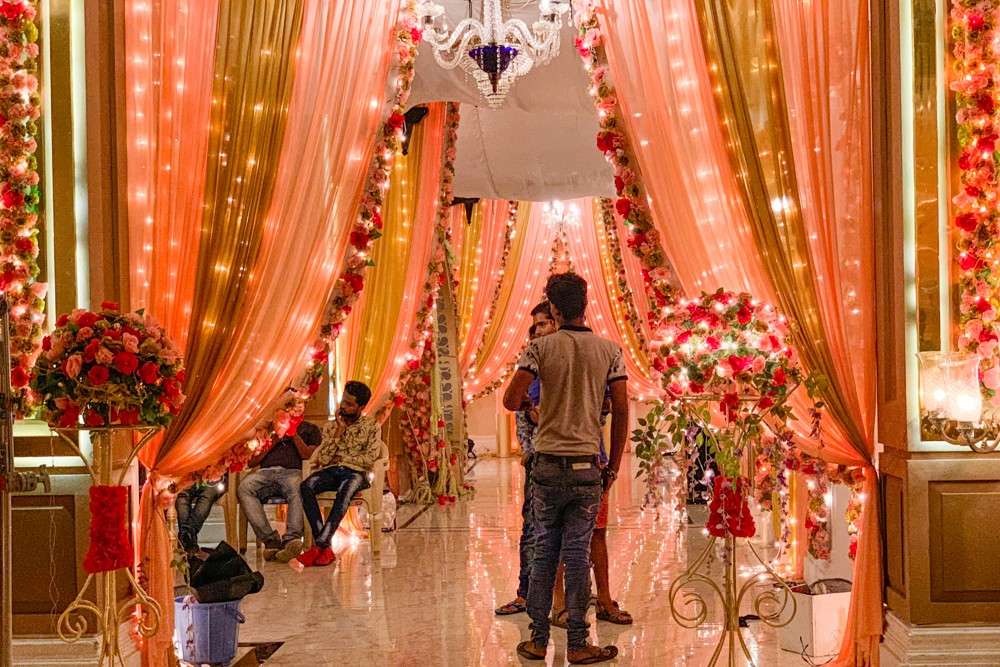 The set was still being dressed with row upon row of pink gossamer curtains edged with flower garlands and twinkle lights. The “groom,” in an embroidered baby blue kurta and pointy Indian shoes, dodged crew members as he paced around, talking on his cell phone. The “bride” and two “moms” sat on the sidelines looking bored while the crew adjusted lights, set up mics and waited. 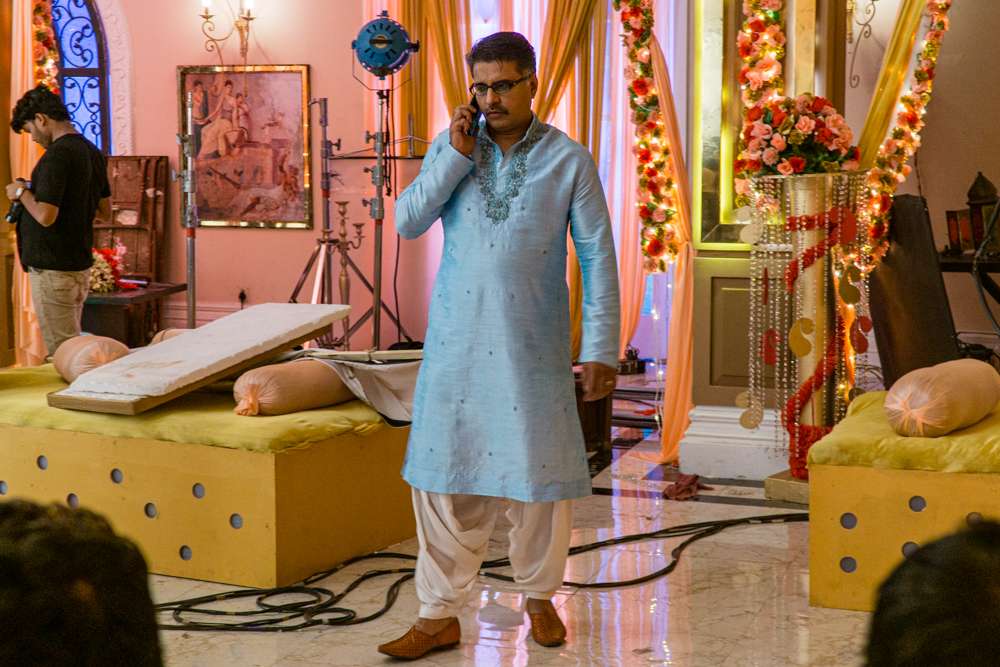 Before the director called the shot our guide tore us away again. I was reluctant to leave, but the  live Bollywood show was about to start. We didn’t want to miss that! 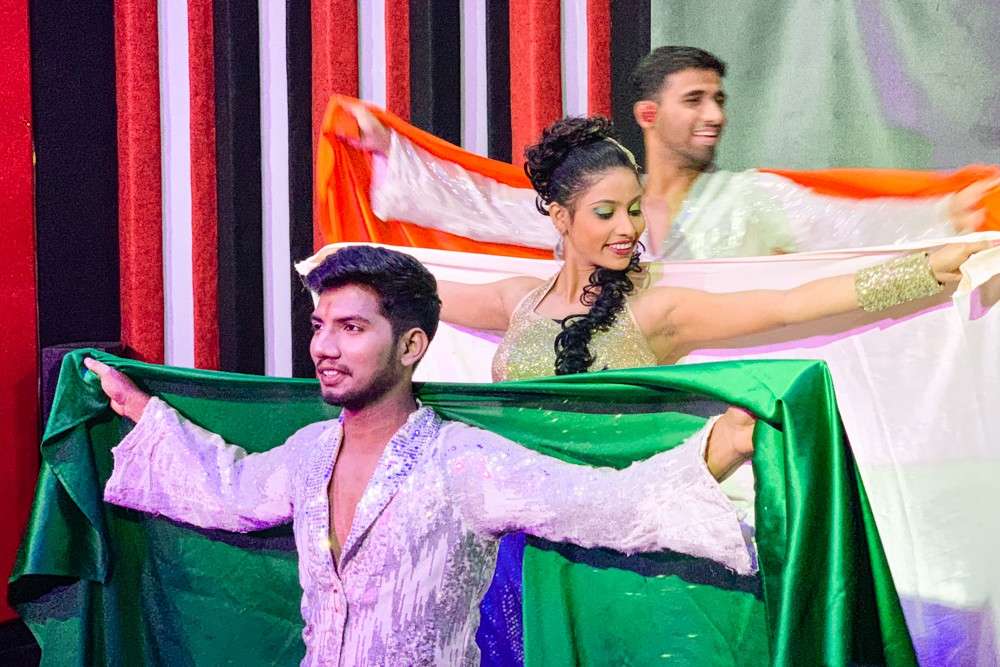 In India, movie sets shooting Bollywood routines are closed to spectators. To give guests a taste of real Bollywood dancing, S. J. Studios has added dance demonstrations to its tours for foreign visitors. The intimate theater was full. Most of the other guests were a related group of Muslim families from Malaysia.

Four dancers in sparkling costumes came out lip-syncing and dancing to Indian pop music. It reminded me of a miniature version of a Las Vegas review. Between dances we were treated to narrated shorts recounting the history and allure of Indian movies, recapping much of what we had learned at the museum. Again it was clear that Indian cinema encompasses so much more than Bollywood song-and-dance numbers. 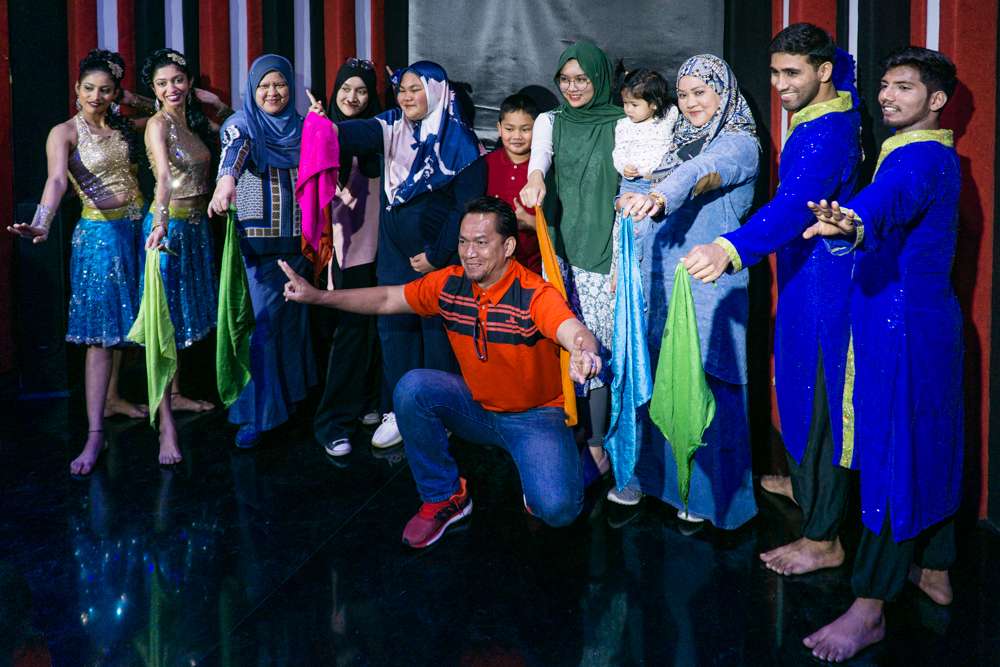 But our afternoon wasn’t over. Apparently it was our turn to join the pros in a makeshift chorus line. We were directed to raise our hands, shrug our shoulders and say, “oy, oy, balip, balip.” The “oy, oy” part was pretty easy. I could do that. But surrounded by four professional Indian dancers in full make-up, glittery disco outfits and bare feet, my tourist tennies and casual slacks just didn’t cut it. Nonetheless, we gestured with our colorful scarves and posed for our adoring fans. 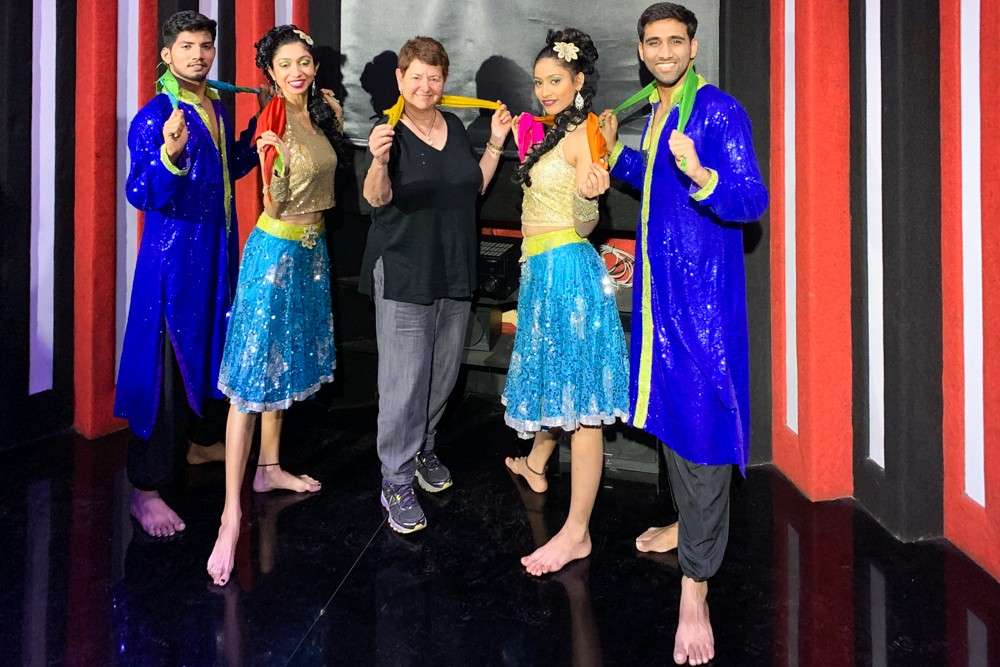 For a comprehensive Bollywood experience, consider combining the offerings from Mumbai Magic, one of India’s premier tour companies. The cost for personalized Mumbai Magic tours varies according to how many elements are included, group size and time available. Personalized tours generally include a car and driver.