A Tale of Two Hummingbird Nests

Tragedy and triumph in a San Francisco garden 37 Comments
7

David and I live in the city. We think of our lives as urban. But at night the great horned owl’s resonant call or the howl of coyotes often pierces through the fog. By day, daring ravens chase predator hawks, taunting the larger birds with angry squawks to protect their nests.

On a more gentle note, during the spring we are a grateful audience when the local Anna’s hummingbirds put on a lunchtime display, diving deeply from the top of the redwood next door to our blooming fuchsia. The impressive show is meant to attract a mate. It seems to work. This year I glimpsed two hummingbirds hooking up on a branch of the apple tree just before the buds burst open.

One morning a few weeks later David called me to the living room window. “I think a hummingbird is building a nest.” Sure enough, a hummingbird had laid down a circle of bright green moss about two inches wide. Even at that beginning stage it looked cozy. 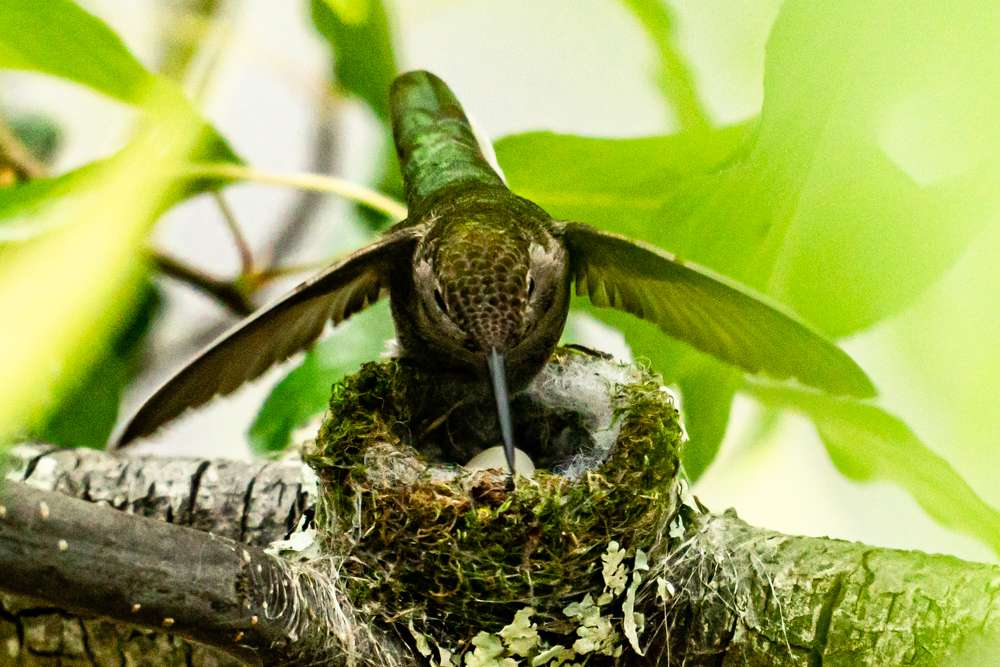 Before we could get the camera out, she had built up the sides with tiny twigs, lichen, more moss and strands of spider web to glue it all together with strength and elasticity. Elasticity? I had to think about it for a minute. But the nest needs to shelter the jelly-bean size eggs as well as almost full-size baby birds. It’s one of nature’s miracles of construction. 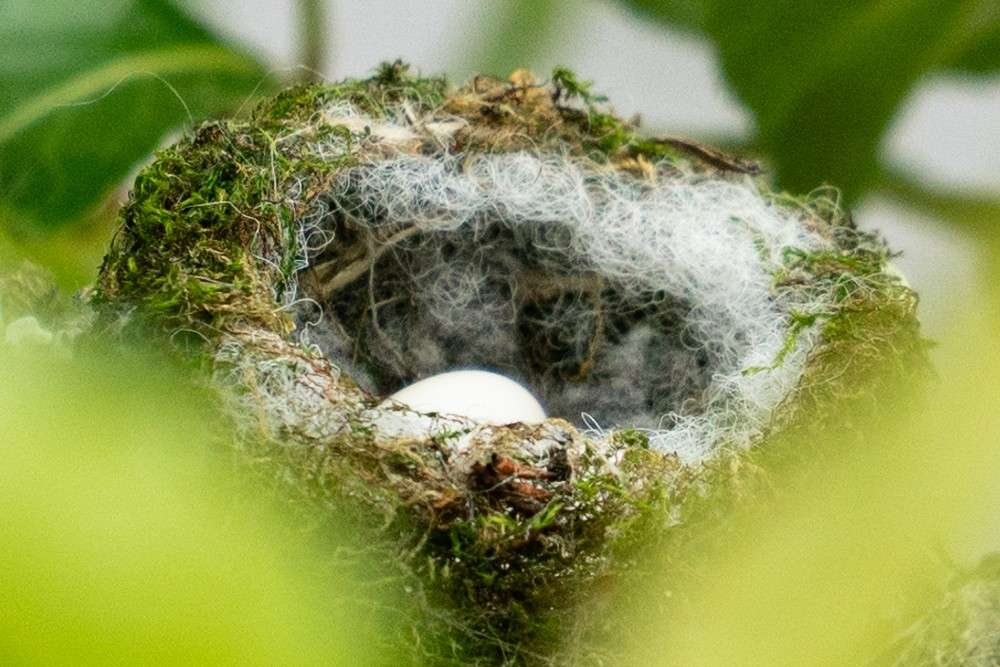 We were excited, but nervous. It had been nine years since we were treated to a front-row seat as a mama hummingbird tended her tiny flock. The first time didn’t turn out well.

A mama hummingbird was nesting right in front of my living room window. If I reached out the window I could almost touch her. Well, not quite. But it’s the closest I’ve ever come to a mama bird and her brood. For more than a week I sat and watched. Breathing quietly and watching. Waiting and watching.

My nest, my living room sofa, gave me a front row view of her nest. Barely bigger than Thumbelina’s walnut-shell cradle, the twig, lichen and moss nest sat on the wide spot of a branch of my ornamental pear tree. Mom sat right in front of me, so close the iridescent green markings on her head and back shimmered in the dappled light. She was the first thing I looked at in the morning and the last thing I noticed before evening light gave way to darkness. As addictions go, watching a hummingbird is a mild one, but make no mistake, watching her was addictive. 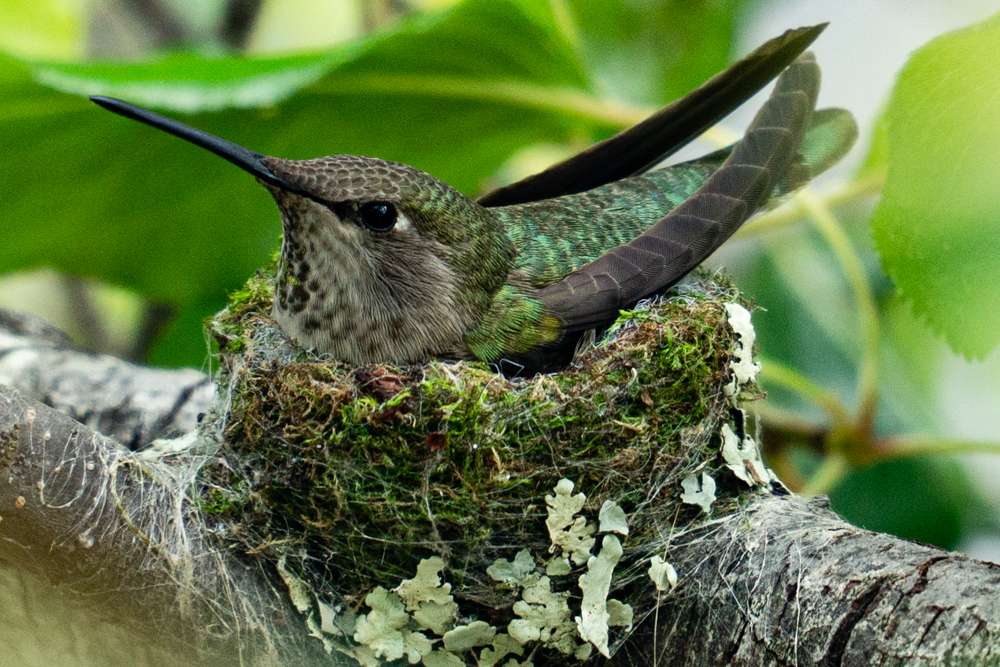 I synchronized my breathing to the rise and fall of her chest – slower than I expected from a hummingbird. I noticed the patterns of wind in the bright shiny leaves that sheltered her. I felt a calm I attributed to her as she sat quietly, bravely facing March-like winds on blustery April days. As her buffeted branch pitched in the wind, she rode her bouncing nest as if it were a bucking bronco and she was a rodeo star.

When I tried to get a look into the nest, at first all I could see was a ball of fluff – really two balls of fluff – barely the size and integrity of small dust bunnies. It looked like they could float away like dandelion puffs on the gentlest breeze. 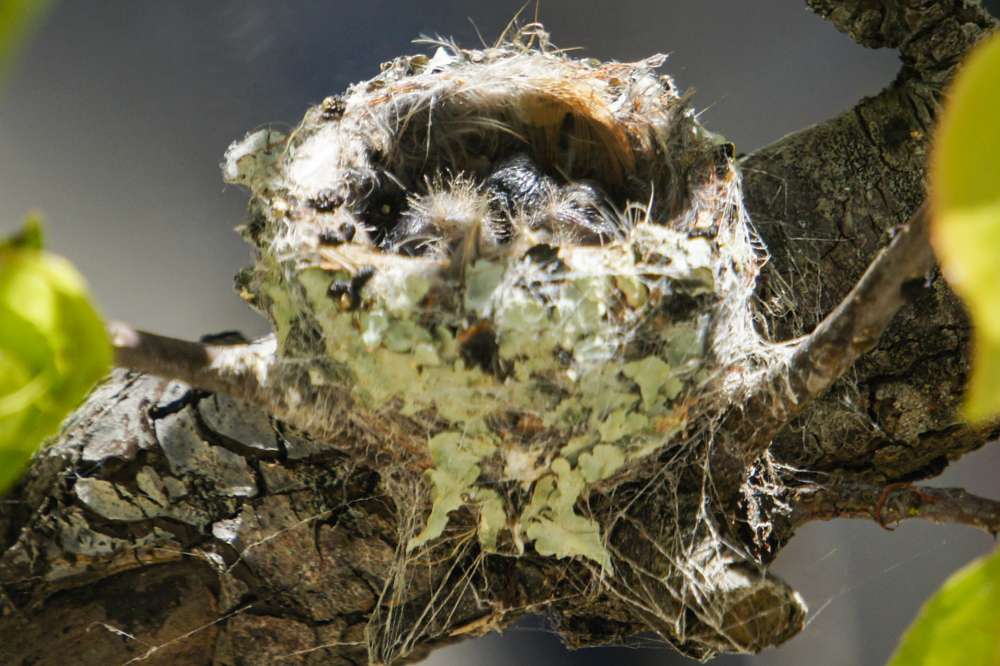 When mama was there, she sat and sat as if on a Zen retreat. Then she started to feed her chicks, directing her long beak toward two bright orange targets poking up from the nest. Easy to find, the babies’ mouths looked like mini megaphones, though they made no sounds, no peeps. 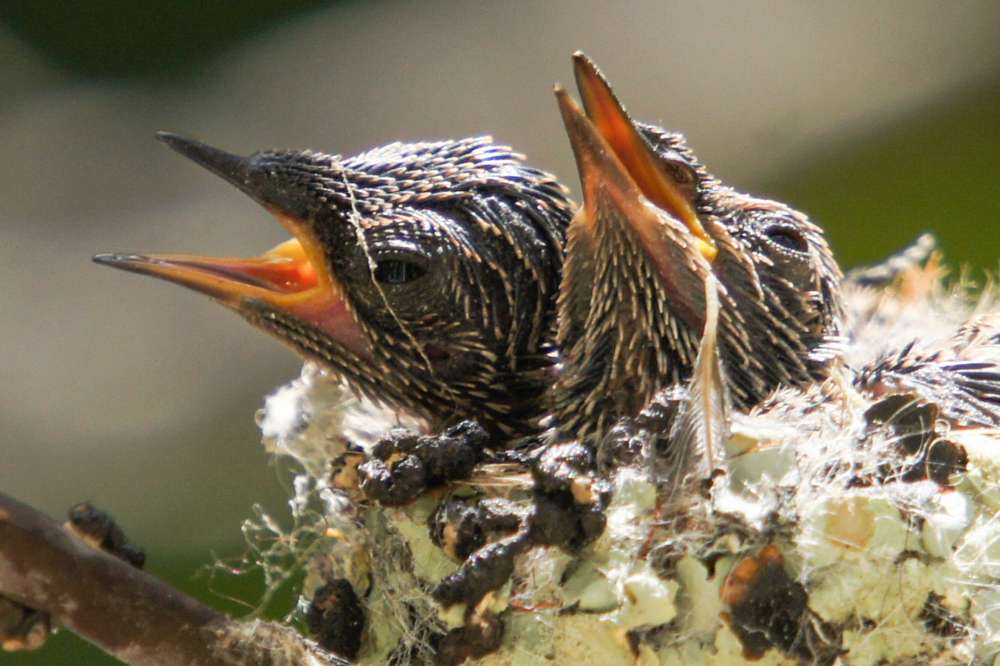 Over days the babies’ fluffy gray down darkened and morphed into feathers in a real-life time lapse. Their tiny heads poked out, beaks upraised so mom could find them. One day a tiny wing unfolded itself and stretched beyond the confines of the nest. Suddenly the diminutive nest looked awfully crowded.

As the babies grew, mom spent more and more time away. The quiet days of sitting gave way to scouting the neighborhood for food. Sitting away from the nest on nearby phone wires or tree branches, she watched, scanning for danger. She warned away the dark-headed chickadee and redheaded house finch that dared to land in her tree. 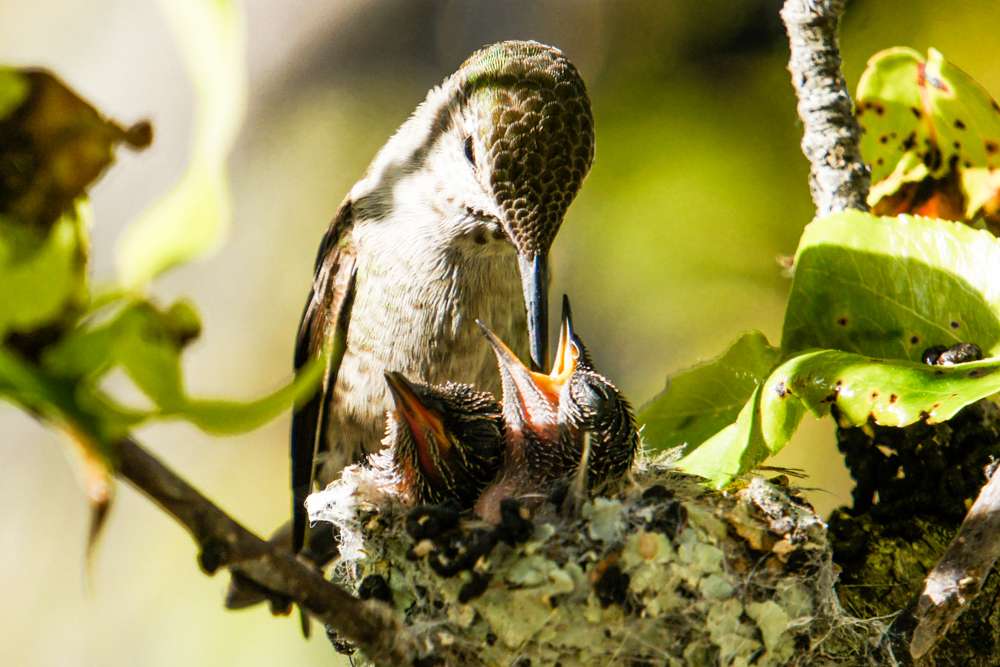 It didn’t take long for the babies to sit up and look around, beaks up and ready when mama came back. Before arriving at the nest, she hovered, surveying the scene. She seemed more jumpy, more restless, more alert. Leaving the nest she would lift straight up like a helicopter, then zig and zag until she cleared the tree as she headed out for food.

Watching, I often felt like a voyeur, stalking my neighbor’s apartment like Jimmy Stewart in Rear Window. My tool of choice, like his, was my telephoto lens.

Or was I more like Jane Goodall or Diane Fossey? My field notes were casual at best, my understanding of hummingbird behavior confined to one sample over a few days. I was, however, able to try “wildlife” photography from the comfort of my living room. The challenge: to catch mama landing or feeding the chicks. I became attuned to her coming and going. I noticed her shadow on the driveway as she approached. When I was lucky, I started the video in time to catch her sticking her landing like an Olympic gymnast.

I was mesmerized. I couldn’t leave. I wanted to see the chicks take the bird equivalent of a baby’s first steps. I was primed to see them fledge and start to fly.

But it was not to be. My private hummingbird show took a dark turn just as the babies were getting crowded and restless in the nest. I could see their feathers become more distinct. Mama stayed away for longer and longer periods. I didn’t see her that morning nine years ago until it was too late. Taking a casual glance out the window as I walked by, a flash of blue caught my attention. Brazenly the scrub jay swooped between the house and the tree. He landed first on one branch, then hopped to another. I didn’t know whether to bang on the window or grab the camera. I didn’t know whether to be a journalist, researcher or great aunt. It didn’t matter. It was over before I could react. The once teeming nest was as empty as could be, and I felt as sad and empty as the nest. 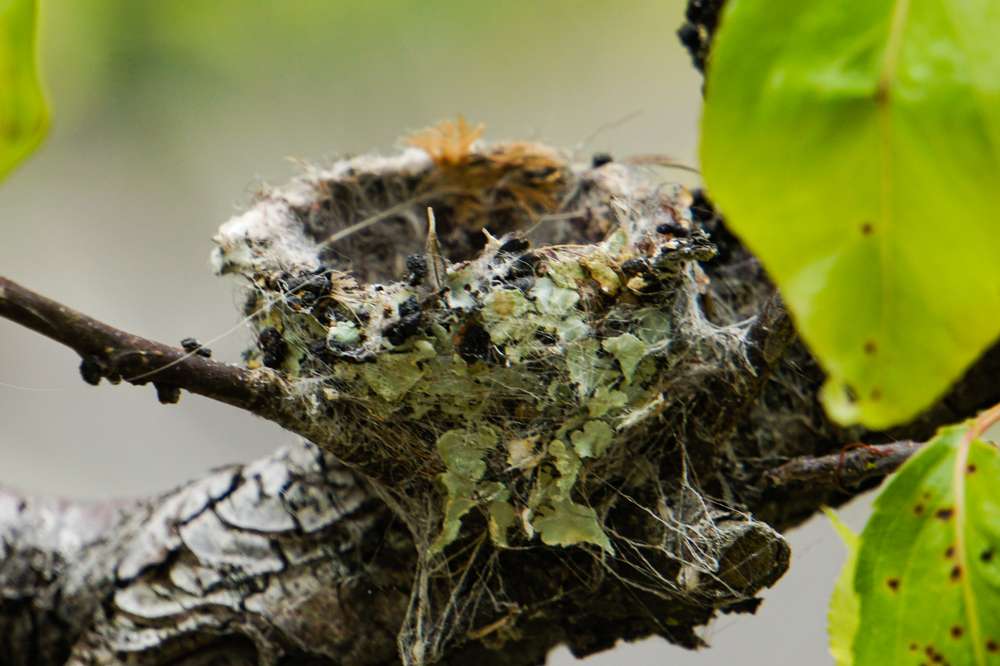 I wondered what mama would do. Would she know what happened and never come back? Had she abandoned them with her long absences? I didn’t want to look out the window, but couldn’t help myself.

Mama came back later in the morning, zigging in from wire to branch like she always did. She perched on the edge of the nest. Then, as if she didn’t see that the chicks were missing, she aimed her head down, poking the nest over and over again. 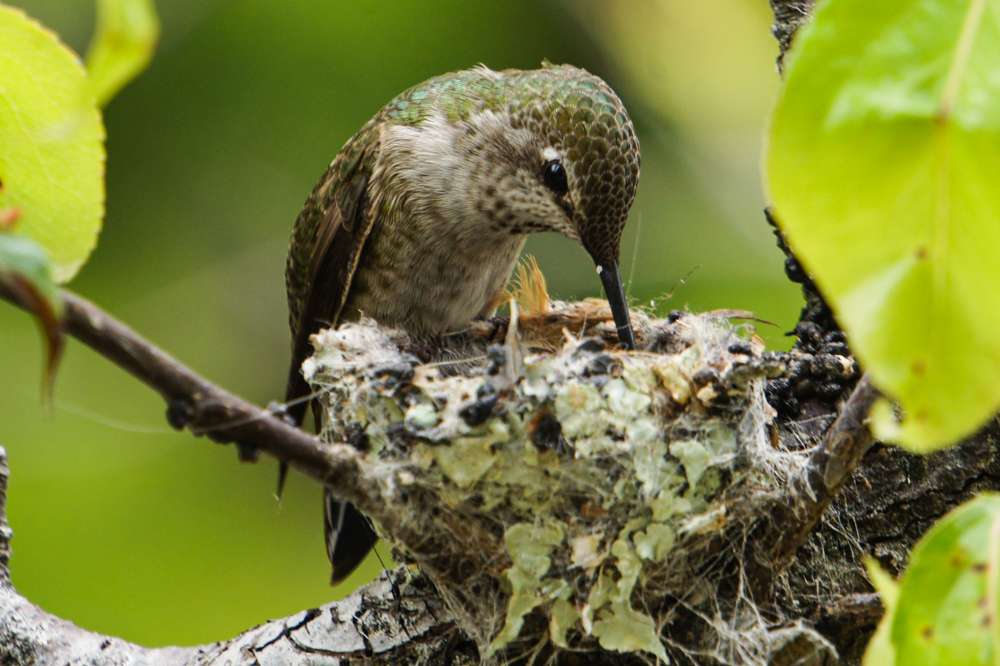 I tried to imagine what she felt, if anything. Then she settled herself in the bottom of the nest the way she did when they were tiny and began rocking back and forth. Was it the wind, keening, a sense of loss, a way to comfort herself? We’ll never know.

It’s been nine long years since we watched our first hummingbird mama. Ever since, I’ve looked at jays as if they were Vladimir Putin.

This year we wanted to be prepared. We set up the tripod so we could stop by and grab a photo whenever there was action in the nest. We noticed that mama’s rhythms and ours were different. The hummingbird show competed with worry about Covid and disastrous news from around the world. We worried as we watched the babies grow. This time we knew that our lives as well as theirs were fragile. 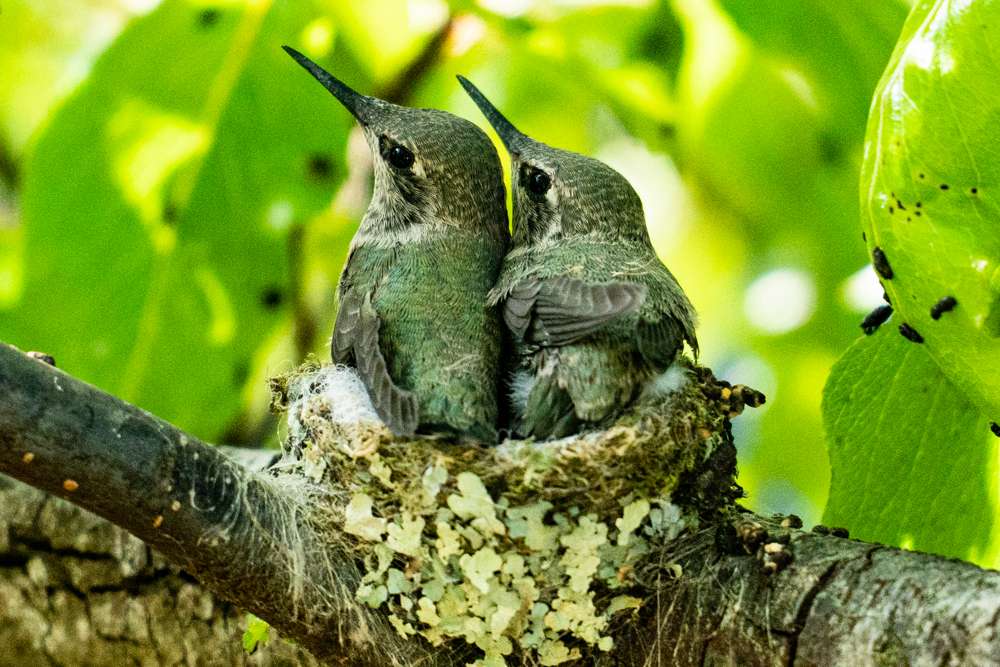 But the chicks grew strong on their windy perch. Mama #2 seemed to stay away longer than Mama #1. We watched the chicks grow quickly, their down giving way to feathers. The second set of sibs seemed a bit more rambunctious, spreading their wings and nudging each other for space. After playtime they compressed themselves into their tiny abode and napped.

One day we saw one of the babies perch on the ledge of the nest. “They are getting ready to go,” I told David. I had no idea whether they would just fly away to their adult lives or come and go like modern human twenty-somethings.

That night we came home to just one baby bird in the nest. We knew our 2022 hummingbird show was almost over. The next morning we resumed our vigil after dawn, opening the window early to get a good shot. It was like watching a human baby, waiting for that very first step. Would we miss it? 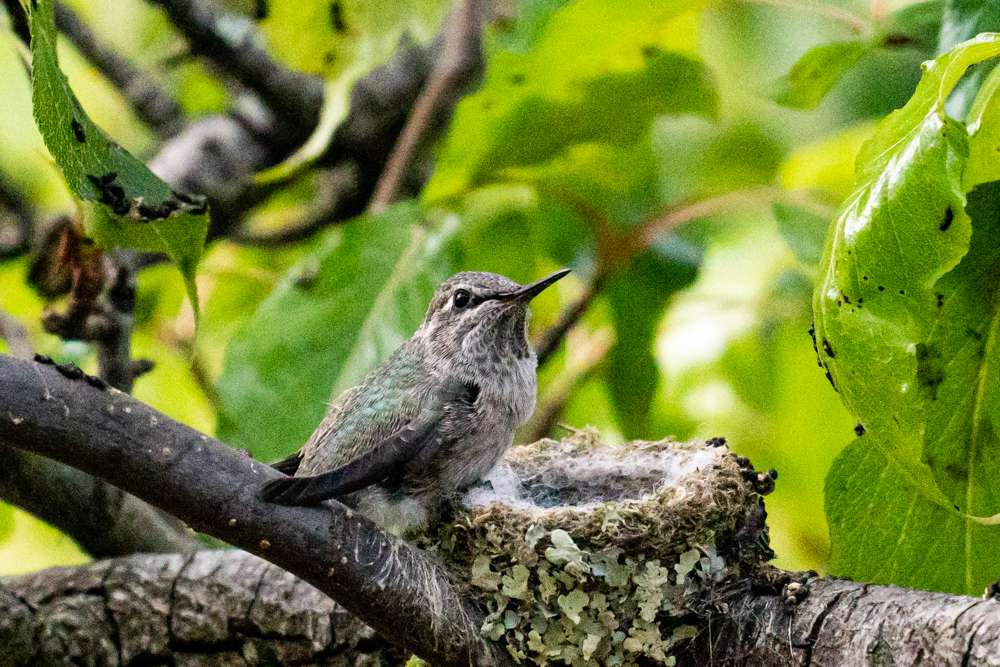 Luck was with us and our fledging hummingbird. Before breakfast, the tiny ball of fluff we had watched grow into a bird hopped onto the rim of the nest and flew away. Just like that. Mama was nowhere to be seen. 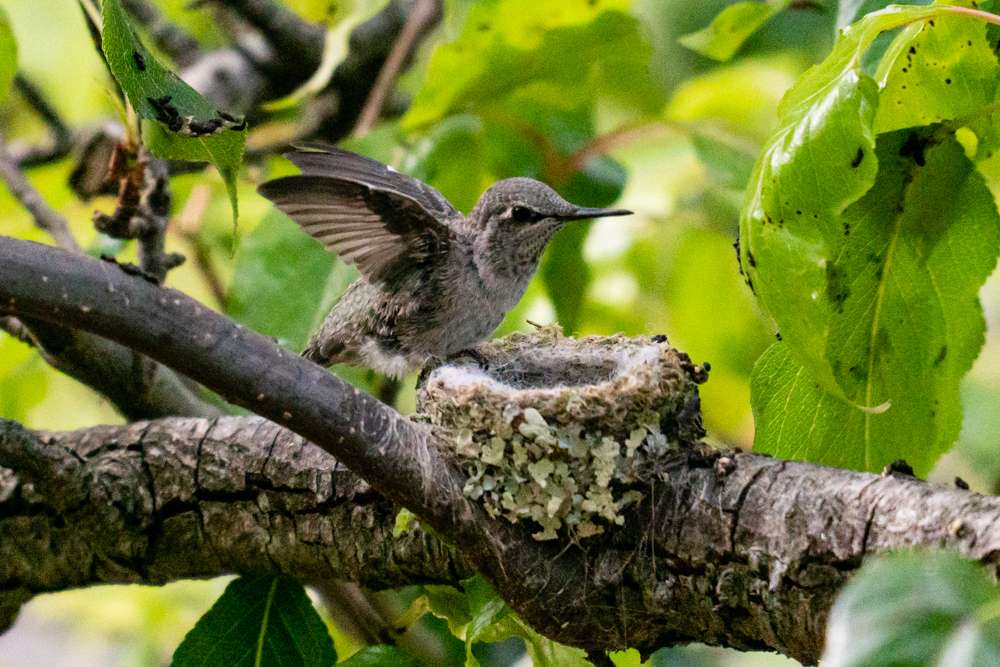 We cheered as we closed the window and put the screen back on. The second act of our bird-watching show ended well. 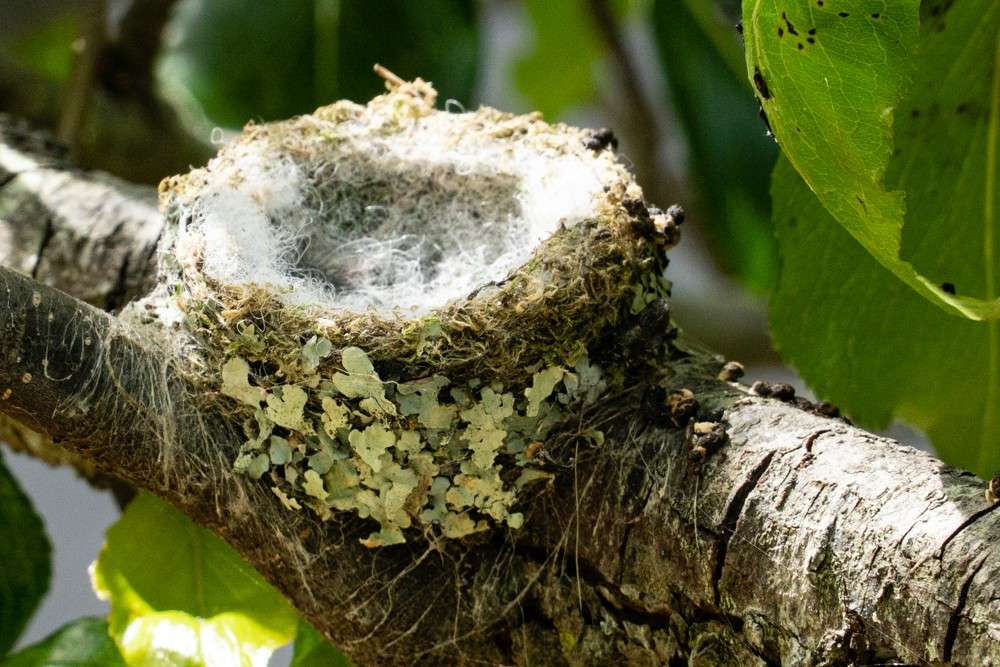 Now, when we have lunch in the backyard and a hummingbird flashes by, we wonder if we’re seeing either of the birds that grew up before our eyes. Or maybe the bird in the apple tree is mama. This Mother’s Day we wonder if she remembers the children she brought to life.